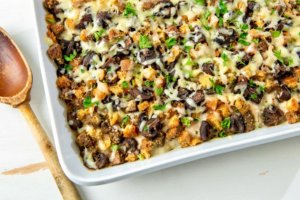 Chicken and Wild Rice Casserole
Yield: 8 servings
The ultimate comfort food layered with flavorful rice, protein-rich chicken, a creamy sauce, and crispy topping－and there are easy options for adding vegetables. Plus the casserole is quick to assemble, and you may prepare it ahead of time and even freeze it.

Need a gluten-free casserole?
*Uncle Ben’s rice mix contains wheat, but Near East has a similar 6-ounce box that works equally well. Just make sure you purchase the box that says long grain and wild rice. Zatarain’s also sells a comparable product, but I have not seen it in the stores I shop locally.
*Similarly, Campbell’s cream soups contain gluten, but Pacific sells a spot-on, gluten-free replacement that comes in 10.5-ounce box. (I believe some stores sell the Pacific soup in a similar size can.)
*Finally, Pepperidge Farm’s dry herb seasoned stuffing is not GF, but Three Bakers carries a comparable product that works beautifully and doesn’t taste at all “gluten-free.”