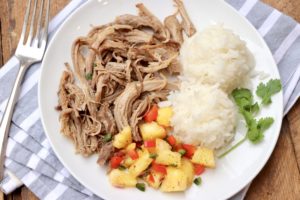 *Bacon adds a little extra flavor and a hint of smokiness, but you may omit it.

**A bone-in roast may be used, if preferred. In this case, cut out the piece with the bone first, and then cut the 2 other pieces to roughly match the first. Also, sometimes only smaller roasts are available, in which case I buy two, aiming for a total of about 5 pounds. Don’t fret if the weight is a little off; the cooking time should be reliable if you stay within a 4-6 pound range. Finally, I’m less concerned about trimming the extra fat from the roast when preparing in advance, as the fat that breaks down and cooks out of the meat will rise to the top of the brothy juices upon cooling.

Helpful Hints:
•As a general rule of thumb, use ¾ to 1 teaspoon of coarse salt for every 1 pound of meat, choosing according to your preferred level of seasoning. (Using fine salt? For every 1 teaspoon coarse salt, I use ¾ teaspoon fine grain salt.)
•This is a great meal to prep in advance. In this case, the fat in the liquid will rise to the top and solidify as it cools, making it easy to remove and discard before reheating.
•If you’d like to crisp the meat, you can broil it as directed in my pork carnitas recipe. Leftover pork crisps well in an oiled skillet or can be gently warmed in the microwave with or without the flavorful juices.

How long does it take an Instant Pot to pressurize? It can take anywhere from 5 to 30 minutes, depending on the quantity and temperature of the food in the pot you’ll see and hear steam coming out of the pressure release (steam release) handle and/or float valve.