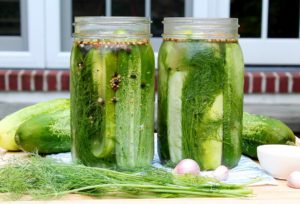 Refrigerator Dill Pickles
Yield: 2 quart jars (recipe easily halves or doubles)
No canner is needed and once the spices are assembled, these crisp pickles come together quite easily and may just become a summertime favorite!

For the soaking step:

To make the pickles:

What is pickling salt?  Pickling salt (also called canning salt or preserving salt) is pure granulated salt (sodium chloride).  It doesn’t contain anti-caking ingredients or iodine, which can turn pickling liquid cloudy or make the pickles dark.  Pickling salt’s granules are finer than kosher or table salt, making them easy to dissolve in a brine. That said, the finer granule means, tablespoon for tablespoon, you end up using more salt and your pickles will taste saltier.  Morton and Ball are two common brands available at grocery stores, usually in the salt section or next to the canning jars in hardware stores.  To avoid clumping, pickling salt should be stored in an airtight container away from moisture.

Is pickling salt really necessary?  While pickling salt is certainly designed for pickling, it isn’t the only salt that can be used. Kosher salt is a great alternative.  Generally speaking, it’s recommended to use a brand like Diamond Crystal, which is pure salt with no additives.  Morton contains anti-caking agents, although I have used this brand and was hard-pressed to notice any clouding. Pure sea salt can also be used in pickling.  Again, the size of the grain will affect the level of saltiness.

Although table salt is perfectly safe to use in pickling, it isn’t recommended because the quality of pickles may suffer due to its additives.  I have not tried table salt to offer a first hand opinion.

Bottom line:  I use kosher salt because it’s what I have on hand and prefer the slightly less-salty taste created by the larger granules.