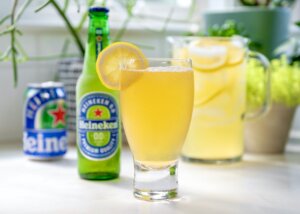 Summer Shandy (Cocktail or Mocktail)
Yield: 1 serving
Equal parts light beer and lemonade make for the easiest drink and can be modified in several delicious ways. Mildly sweet with a hint of tang and so very refreshing!

Traditional English Shandies are made with lemon soda, so in the United States, where we don’t often see sparkling lemonade, variations are often made with lemon-lime soda (like Sprite or 7-Up). You may try this option in place of the lemonade.

Other Shandy variations include using orange juice, ginger ale, or ginger beer in place of the lemonade. I’ve made a fall shandy with sparkling apple cider, and it was quite good.

Make it a mocktail: As with regular beers, a light tasting non-alcoholic beer, like Heineken 0.0, will work best in this.

Make it gluten-free: I recently made this shandy recipe with Auroch’s Blond Ale and it was delicious. Glutenberg also makes gluten-free beer this is widely popular.