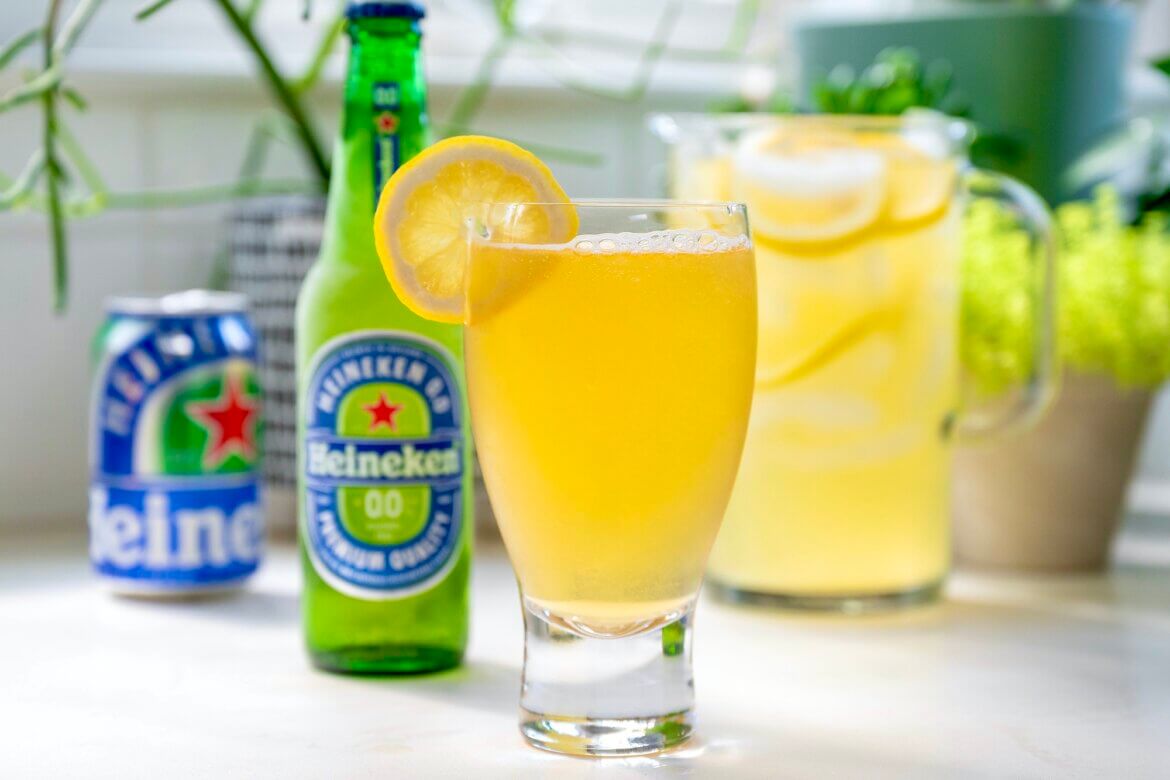 Equal parts light beer and lemonade create the easiest drink and can be modified in several delicious ways. Mildly sweet with a hint of tang and so very refreshing!

Crisp and refreshing with a hint of sweetness, there’s something special about a Shandy on a warm evening.

The 2-ingredient drink is effortless to mix and offers a lighter alternative to the usual cocktail.

This drink also earns bonus points for its flexibility. Recently, I cooked for a group that included a good many who drank alcohol, several whom did not, as well as several gluten-free eaters.

The rising popularity of really good zero-alcohol and gluten-free beers made this Shandy an appealing option for all. As a drink that covers so many bases, it seemed worthy of a mention here, especially during the season of backyard barbecues, graduation celebrations, weddings, pool parties, and the like.

What exactly is a Shandy?

A Shandy is simply beer mixed with a lemon (or lemon-lime) flavored beverage. The drink is typically made with equal parts of each ingredient, although it may be adjusted to taste.

In England, where Shandies are popular, the cocktail is often made with carbonated lemonade. Since a similar beverage is not widely available here, people in the States often use Sprite, 7-Up, or–my favorite–lemonade.

As a bit of trivia, in Germany, the beer and citrusy soda mixture is referred to as Radler. In France and Canada, the lager-lemonade combo is known as a Panaché. 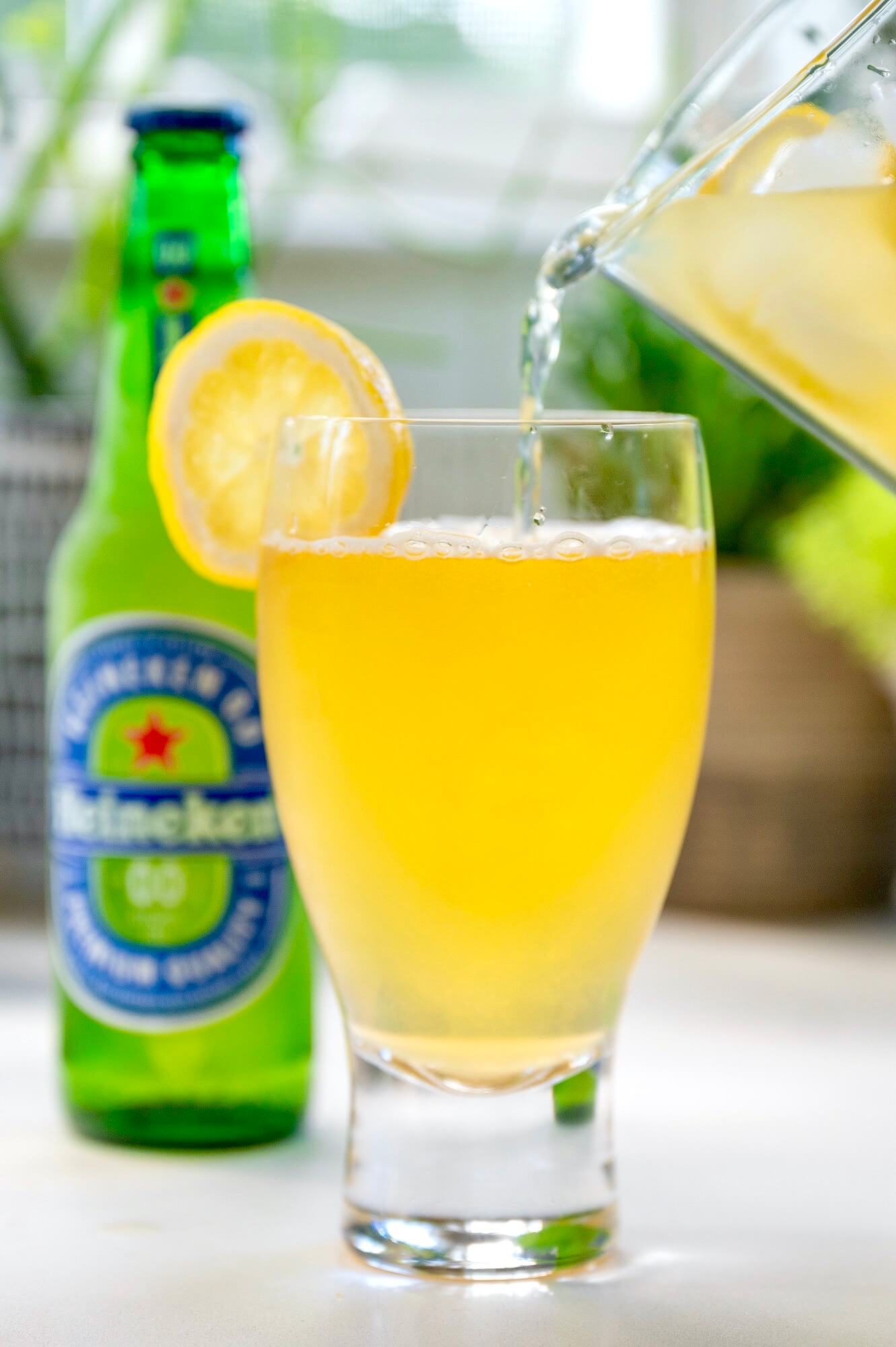 Whatever the name or variation, these drinks are intended to be refreshing. Accordingly, light beers work well, complementing their liquid counterpart rather than overwhelming it.

While you could experiment with dark or hoppy beers, I recommend lighter brews like pilsners, saisons, golden ales, and lagers for the classic crisp drink.

Traditionally, Shandies are not served on the rocks, but you may absolutely add ice if you prefer. (I often do.) 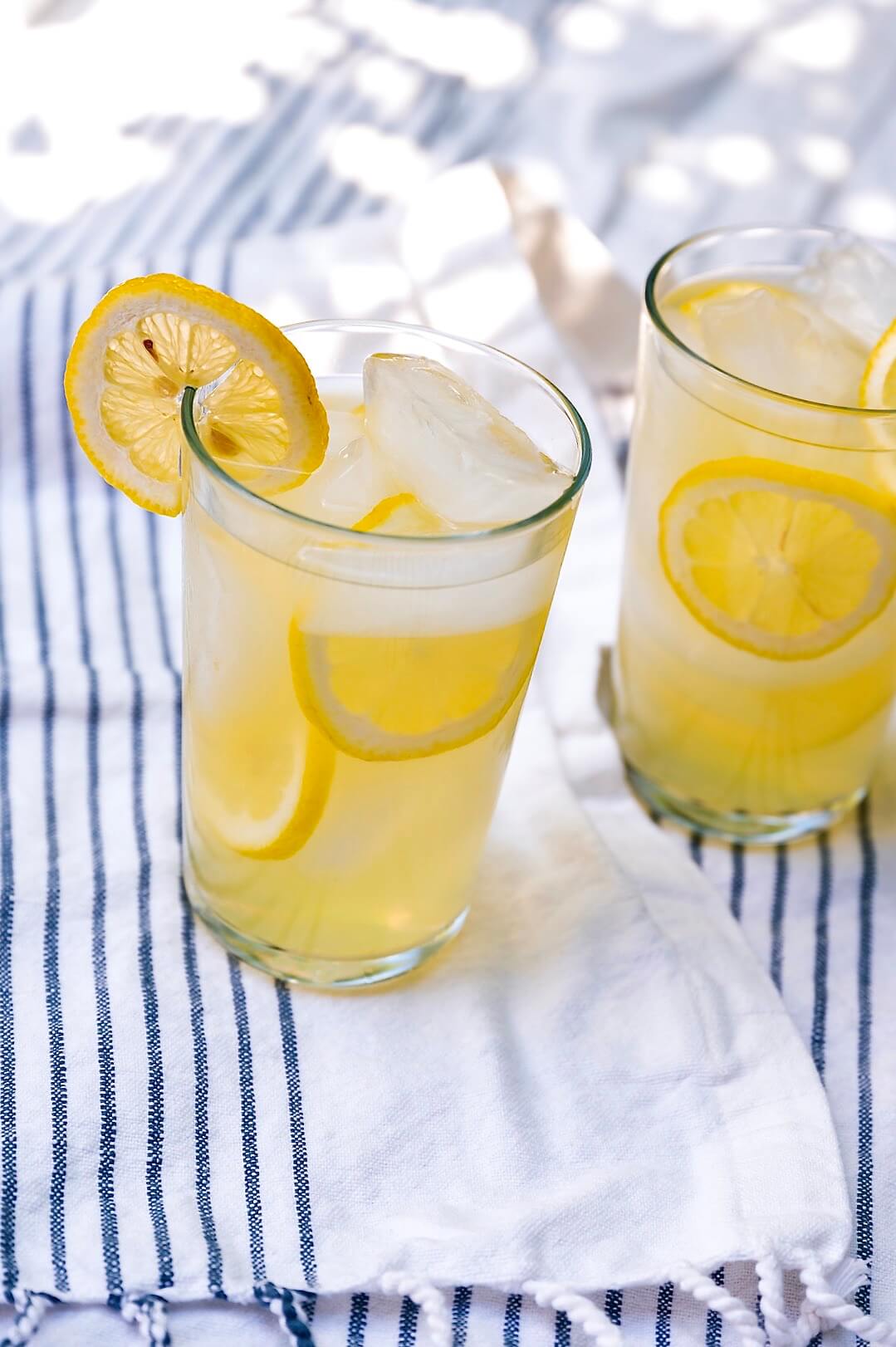 If you’re inclined to squeeze your own lemons, this Homemade Lemonade Concentrate will make it easy to enjoy a Shandy at a moment’s notice. 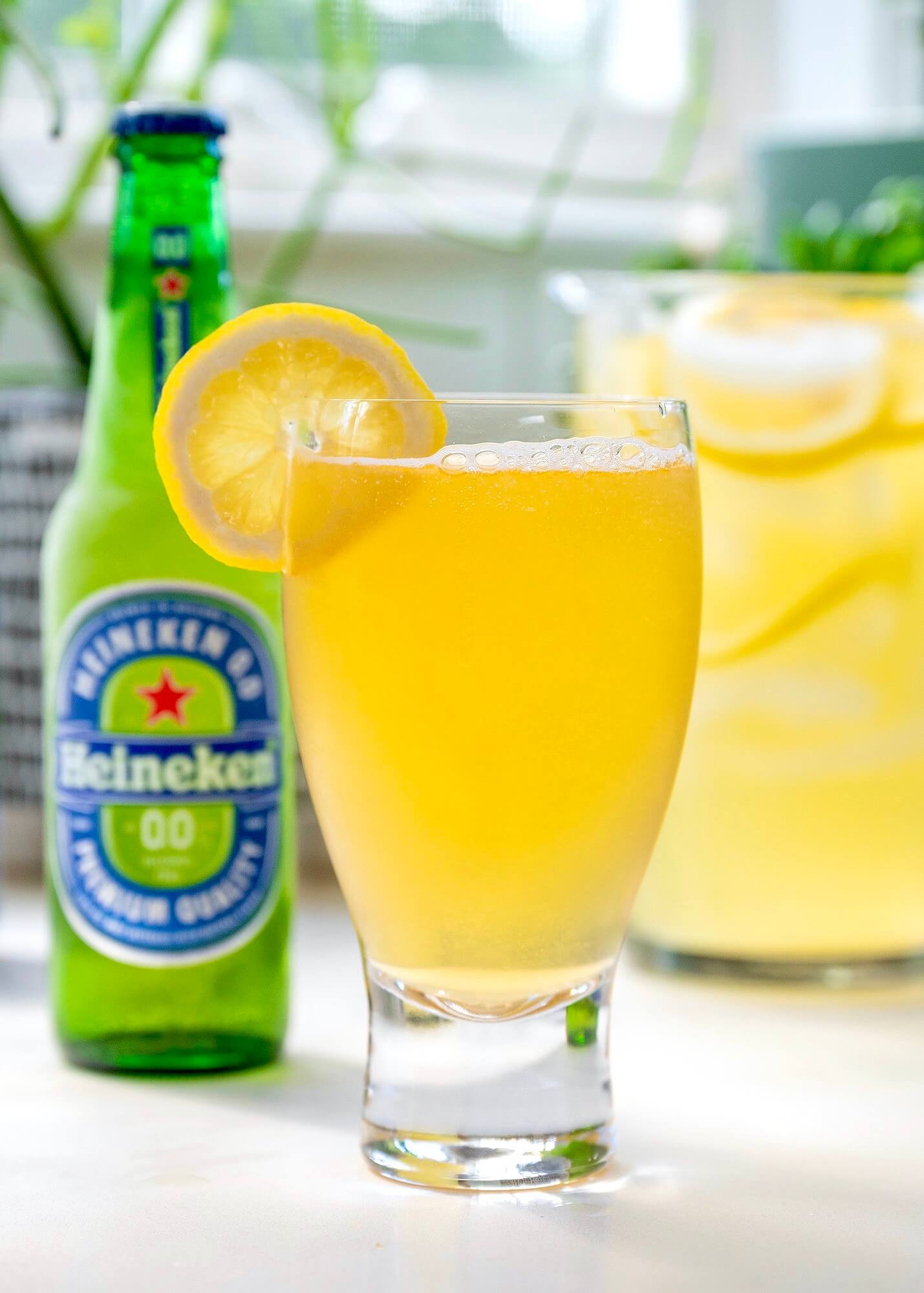 Two easy ingredients make one refreshingly light cocktail that can be enjoyed with regular, non-alcoholic, or gluten-free beer. This flexibility makes an ice-cold Shandy ideal when serving a group where some drink alcohol and some do not, or when you happen to crave a special drink any time of day.

Which are the best non-alcoholic beers? The linked post lists our favorites. My favorite gluten-free beer for this drink is mentioned in the recipe notes. 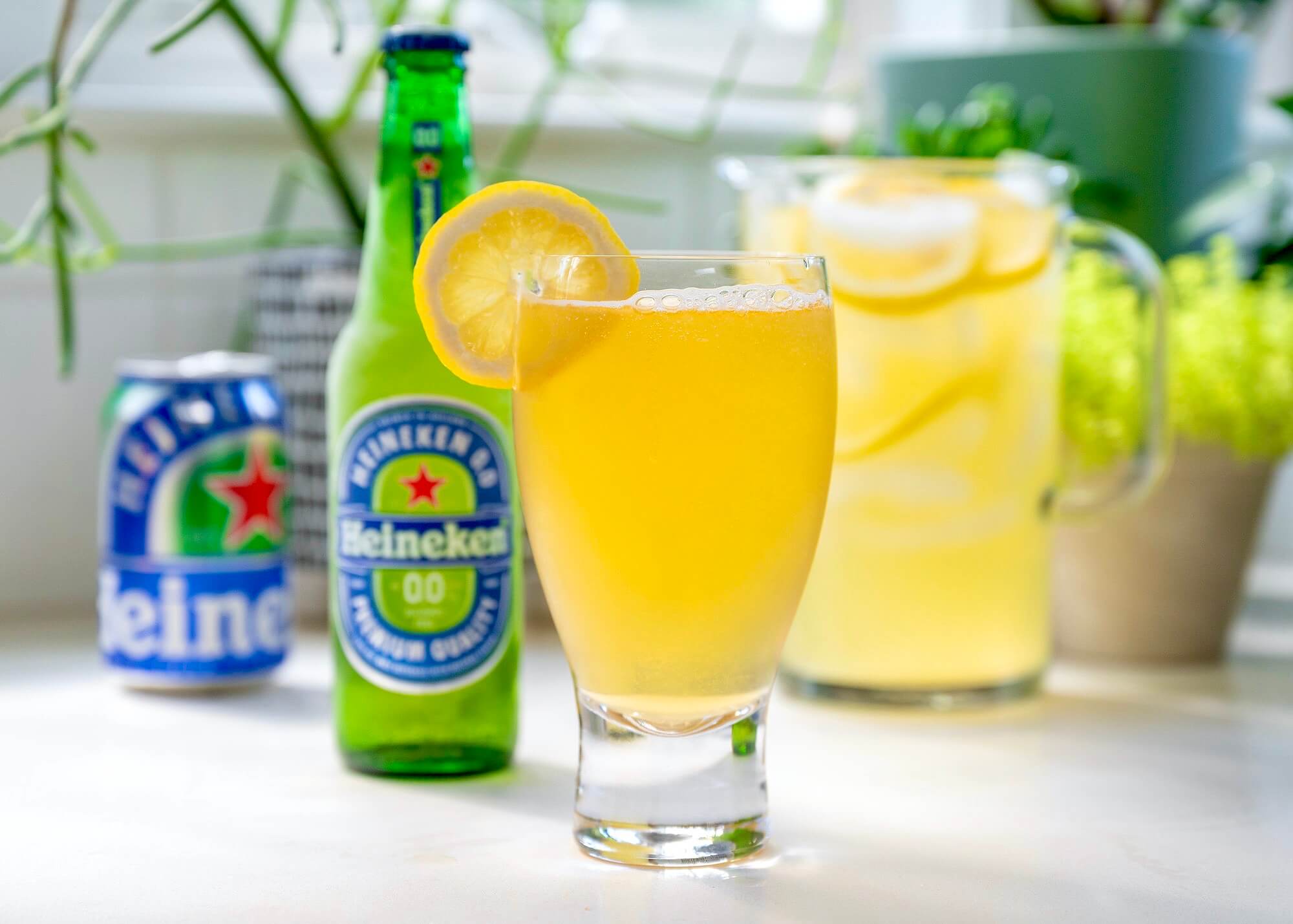 Pour the beer and lemonade into a chilled pint glass or glass of choice. Garnish with a lemon slice, if desired, and enjoy.

Shandies are not traditionally served with ice, but I’ve been known to add ice. Do as you prefer.

Traditional English Shandies are made with lemon soda, so in the United States, where we don’t often see sparkling lemonade, variations are often made with lemon-lime soda (like Sprite or 7-Up). You may try this option in place of the lemonade.

Other Shandy variations include using orange juice, ginger ale, or ginger beer in place of the lemonade. I’ve made a fall shandy with sparkling apple cider, and it was quite good.

Make it a mocktail: As with regular beers, a light tasting non-alcoholic beer, like Heineken 0.0, will work best in this.

Make it gluten-free: I recently made this shandy recipe with Auroch’s Blond Ale and it was delicious. Glutenberg also makes gluten-free beer this is widely popular. 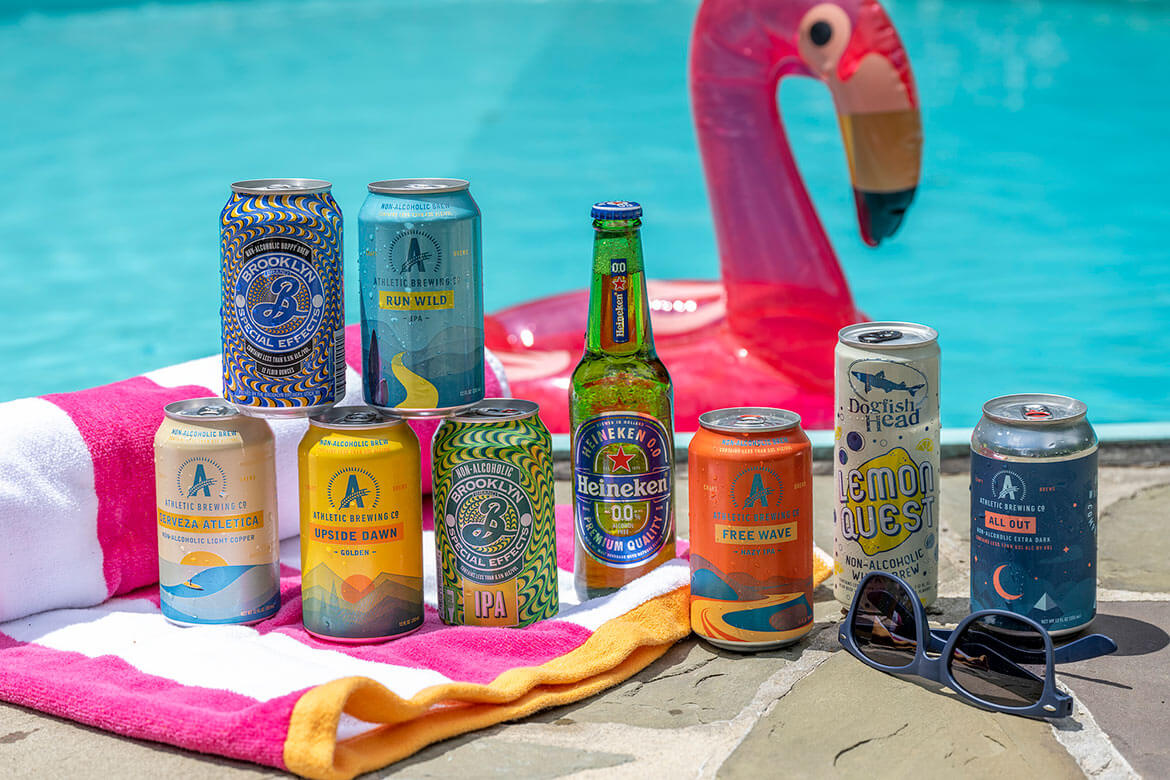