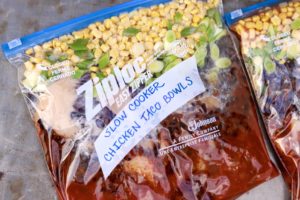 Slow Cooker Taco Chicken (with freezer bag option)
Yield: 4-6 servings
A good freezer bag meal will come to your rescue on busy weeknights and when cooking for a friend in need. Taco chicken is family friendly, endlessly versatile, and quick to prep. Last year I turned the bags into practical gifts for several friends, because who couldn’t use a healthy meal and a night off cooking amidst the busy holiday season?

Recipe variations:
•You could cook 6-8 chicken breasts halves at one time if you prefer to serve them as whole breasts topped with some of the salsa mixture or simply to have extra chicken for leftovers. The recipe as written above, however, is based on chicken weight in order to provide a good chicken-to-sauce ratio, which is more important when shredding the chicken and mixing it back into the sauce.
•For a cilantro lime twist, I stir in 2 tablespoons freshly squeezed lime juice along with the zest of one lime and 1/4 cup chopped fresh cilantro (or more to taste) at the end of cooking time.

Ways to serve:
•Serve the chicken mixture over cooked rice, cauliflower rice, or build your own burrito bowls with optional toppings of choice.
•Stuff the chicken mixture into hard taco shells or soft tortillas that have been warmed first.
•When making taco bowls, I often include a green component like chopped romaine lettuce or shredded cabbage. As another possibility, my Cumin Lime Coleslaw recipe is quite easy and complements nicely.

Helpful hints:
Many slow cooker recipes call for 8 hours, even 10-12, on low heat, but newer cookers tend to cook much more quickly than older models. If you think food seems overcooked whenever you use a slow cooker, you can likley overcome this by simply checking for doneness an hour (even 2 or 3 hours) earlier than usual. Also, slow cookers are designed to be filled 1/2 to 2/3 of the way. When filled beyond this point, recipes will generally require additional cooking time. When slow cookers are under-filled, recipes tend to cook quicker.

Adjustments for cooking in the oven: I have not cooked this recipe in the oven, but I have adapted other slow cooker recipes for the oven, using a Dutch oven or another heavy, tight-lidded pot and an oven temperature of 200°F for low heat and 300°F for high. Another rule of thumb is to divide the amount of hours a recipe needs to cook on low in a slow cooker by 4 and cook for that many hours in an oven set to 325°F. For example, a dish that requires 8 hours on low in a slow cooker will take roughly 2 hours, covered, at 325°F.