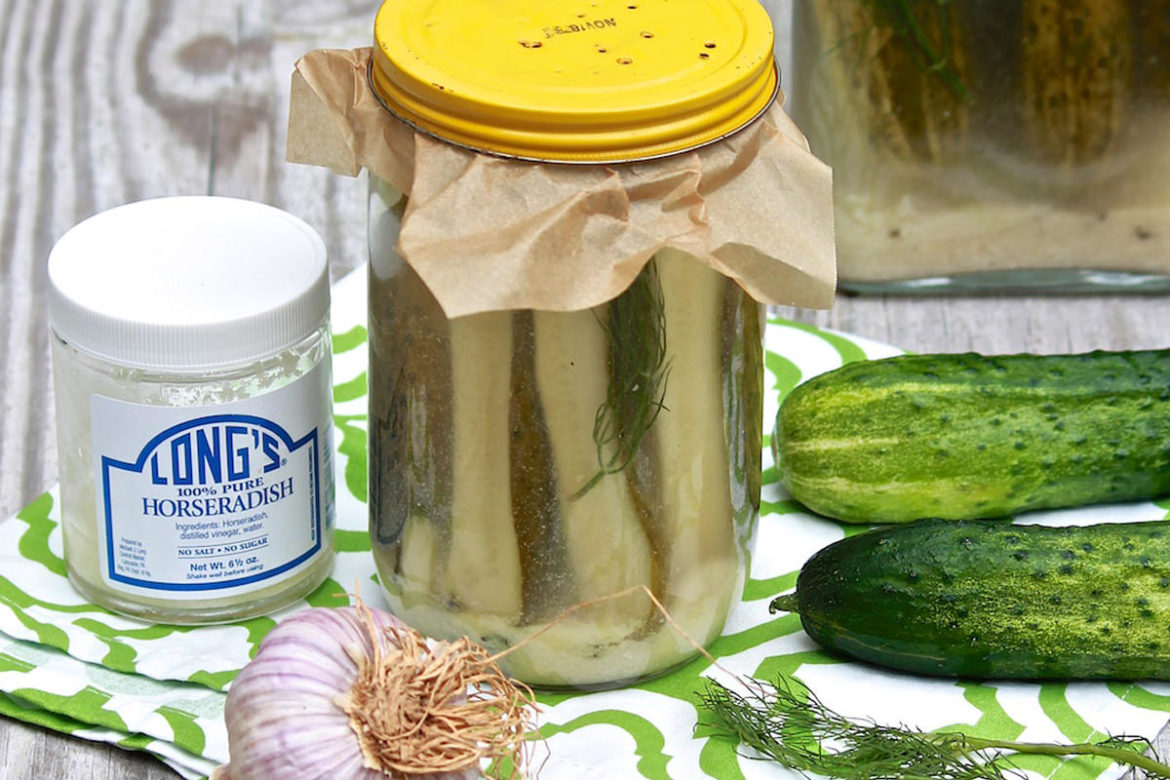 When I saw it in the pages of a feed store magazine, this recipe brought back an instant memory of a gallon jar of pickles on my grandmother’s Fountain Avenue kitchen counter. I was amazed when she told me that the jar would sit there for a whole month before the pickles would be ready to eat. That sounded like an eternity to have a jar of fermenting cucumbers on the counter, not to mention an awfully long time to wait before we could eat them!

In general, I make a habit of vetting out new recipes before I post them here at The Fountain Avenue Kitchen.  My main goal is that readers find the recipes to be low risk and high reward.  I’d rather have a flop in my kitchen and learn from it so that you don’t have the same experience in yours.

In this case, my husband picked up a magazine called Capper’s Farmer while buying feed for our chickens at the farmer’s supply store. He noticed it had a few recipes and some interesting articles, and he thought I might enjoy it. While skimming the pages, my eyes went to a horseradish pickle recipe that not only evoked memories of my grandmother’s pickle jar, it reminded me of a store-bought horseradish pickle that all the guys in my family adored.

It occurred to me that, by the time my 30 days are up, it may be hard to find the small cucumbers that are ideal for pickle-making.  So, I thought some of the risk takers out there might enjoy experimenting along with me.  So many recipes from community cookbooks are real treasures, and I’m hoping for the same outcome from this lovely magazine.  Given the presence of horseradish, these pickles will likely have a little kick.

So, who’s in?  I, for one, will report back over the next 30 days.  In the meantime, I would love to know if anyone else is tempted to try this new recipe along with me.  For the record, you don’t have to make a whole gallon jar!  As I note below, you may choose enough cucumbers to fill your jar of choice, and make enough brine to cover.

And though the wait is long, the initial effort is low.  These pickles really are easy.

Day 7:  We tasted the pickles and adore the flavor.  The pickles have less kick than I thought they might have–in a good way.  They are still loaded with flavor and smell wonderful.  I’m putting some in the refrigerator now and allowing the rest to continue to ripen on the counter. Also, I did an experiment and left the blossom end on some of the cucumbers (see notes, below).  I stored these in a separate jar and, sure enough, the enzyme in the blossom end created a soft pickle.

Day 14:  The flavor of these pickles was such a hit with my family that I started a second batch after one week.  Two weeks after starting my first batch, I compared the two and the flavors were similar.  The biggest change in flavor definitely comes in the first week.  So if you prefer not to have a big jar of pickles on your counter, feel free to transfer them to the refrigerator around day seven.

Day 21:  My dill-pickle-loving sister was visiting from out of town and she raved about this old-fashioned horseradish version.  The flavor becomes slightly more developed each week, but they have truly tasted delicious since week one.

Day 28: Until now, this seven-day pickle recipe has been my hands-down favorite.  Now I have two must-make pickle recipes.  The recipes are completely different, and I love them each for their own distinctive flavors.  Interestingly, I don’t usually gravitate towards dill pickles, but I adore the dill flavor in combination with the kick of horseradish in the recipe below. I kept one jar on the counter for the whole month and, as I mentioned before, the flavor does continue to develop, although more slowly in the later weeks.  In a warm kitchen, the pickles would likely ferment faster and some might notice a white film floating on top of the brine.  Our kitchen tends to stay on the cooler side, and none of my pickle jars had this.  For those who may encounter it, the film is harmless. Simply skim off the top. 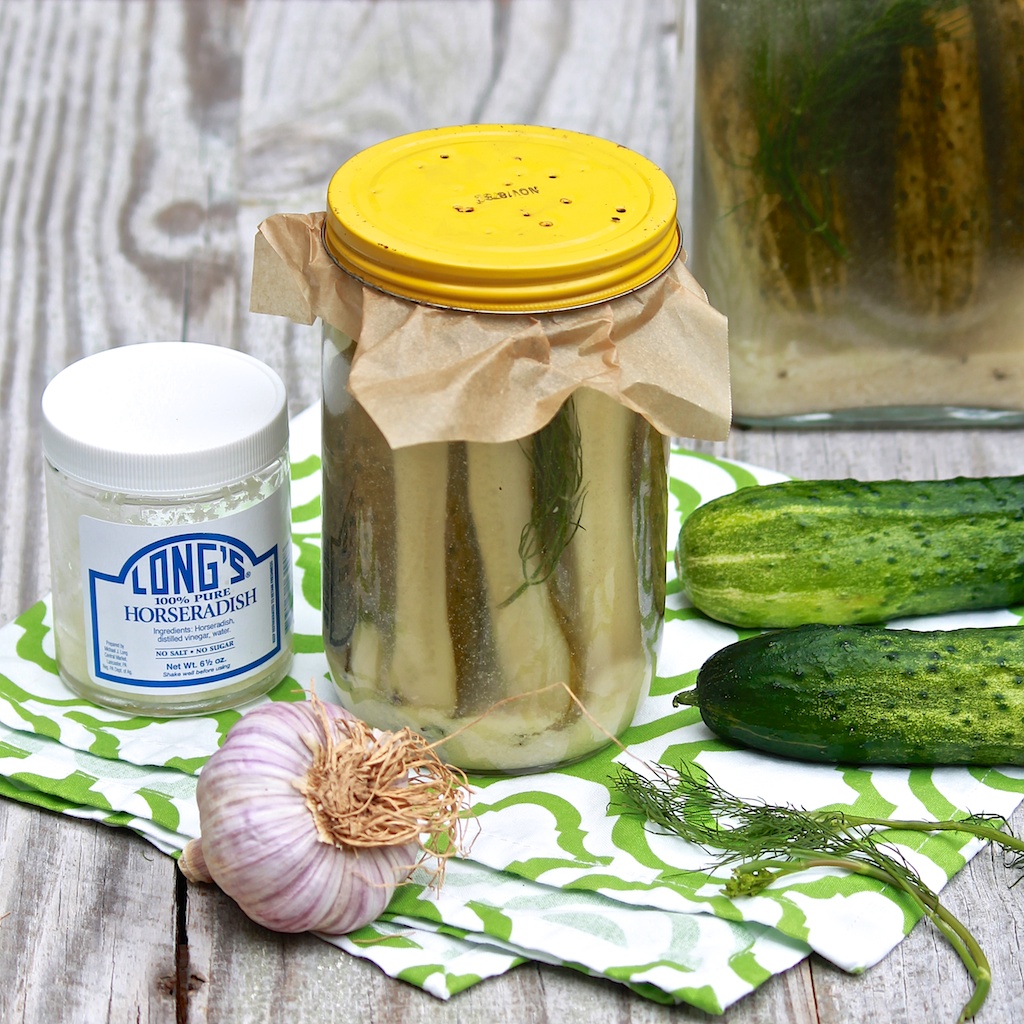 Old-Fashioned Horseradish Pickles
Yield: 1 gallon jar
You can start with any amount of pickles you choose--a lot or a little. Pack them into the desired size and number of jars, then just be sure to have enough brining liquid to cover. If you're not sure about the right amount of garlic and dill, don't worry. As the cucumbers sit over the brining period, you may sample them and add more to suit your taste. Whole cucumbers tend to make slightly crisper pickles, but quarters or halves pack more easily into the jars. See the note section for ways to ensure a crisp pickle.
Print
Ingredients
Instructions
Notes
Tried this recipe?Post a picture on instagram and we will repost it! Mention @fountainavenuekitchen or tag #fountainavenuekitchen!
The Fountain Avenue Kitchen https://fountainavenuekitchen.com/ 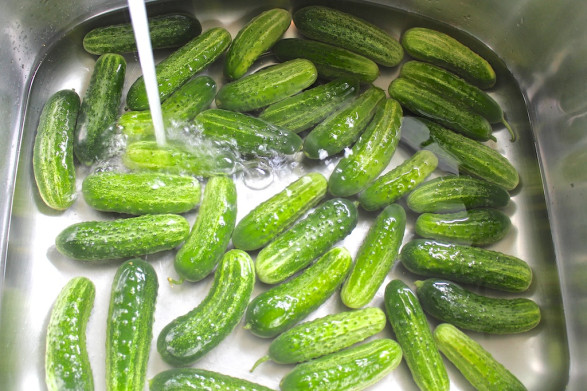 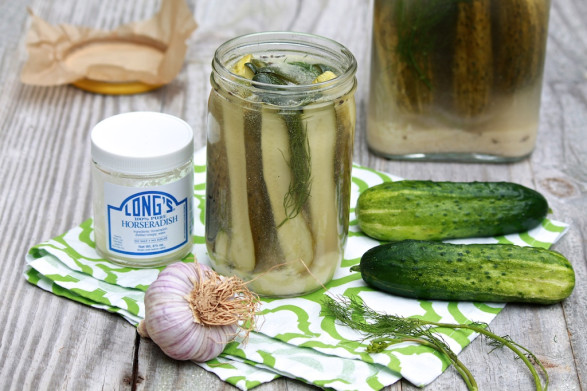 You can get around the problem of a metal lid by using a piece of material or parchment paper to cover the jar. It is not essential that the lid is airtight. The main concern is keeping flies away. Also, as the cucumbers ferment, it is helpful to remove a tight-fitting lid every few days to release any pressure that may build up and to make sure the pickles are fully submerged in the brine.