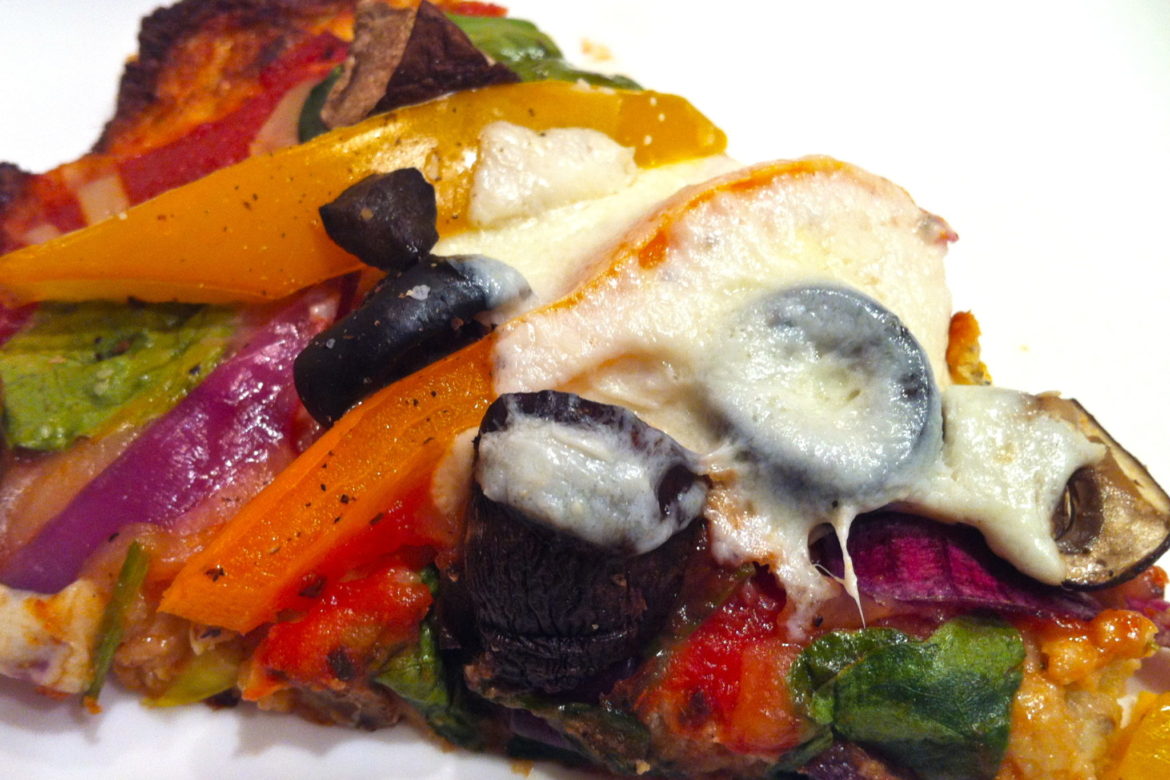 This recipe first caught my eye through a website called Naked Moxie.  She, in turn, had seen this crazy idea for cauliflower crust through a blog called Casey Cooke: Jersey Shore Wildtree.  When I saw the recipe, I simply had to try it.  I mean, a cauliflower crust?  That is some seriously clever thinking!

This was definitely an experimental meal, and I truly had no idea how it would turn out or how my kids would react to it.  In fact, I surveyed the fridge for available leftovers, just in case!  Happily, the end result was delicious beyond my wildest expectations.

I had one small issue that made me think twice about calling this pizza.  The “crust” was not as crusty as a bread crust, although it most certainly possessed an exceptional flavor and appealing texture.  My kids tried to pick up their slice; however, it was best eaten with a fork.  I had followed the recipe for the crust much like Naked Moxie did.  Was I missing something?

Because, the flavor was truly exceptional, I decided to experiment some more.  An email from Casey Cooke provided the missing link:  removing the moisture from the cauliflower prior to baking. Of course!  I do this all the time when baking with spinach and broccoli.  My favorite way of doing this is to literally wring the cooked (or frozen and thawed) vegetables out in a clean tea towel.  (In this recipe, do this prior to putting the cauliflower into the food processor.)  It is so much quicker and more effective than squeezing through a strainer or using paper towels.

Once the excess moisture was removed, the crust cooked up crispier and in a shorter amount of time. I tried different thicknesses of the crust as well.  If you spread the “dough” really thin, you can get a crispy, cracker-like crust.   I made these in smaller rounds and served as an hors d’oeuvre with marinara sauce for dipping.  For a pizza, spread to a thickness similar to a regular pizza crust.

For the toppings, I used an assortment of veggies I had on hand–spinach, bell peppers, black olives, and baby portabellas–and have noted the amounts I used below.  This combination worked well with the base, although you can modify to your taste.

As an option, you could choose not to remove the moisture from the cauliflower, continue with the recipe as is, then spread the mixture in a pie dish and bake.  You’ll end up with a delicious spin on pureed cauliflower.  Yet another idea is to use it like you would polenta, as a savory base for any number of dishes.

I love it when a little risk-taking in the kitchen pays off!  (P.S., I’m working on another version of the crust using spinach!  Stay tuned!)