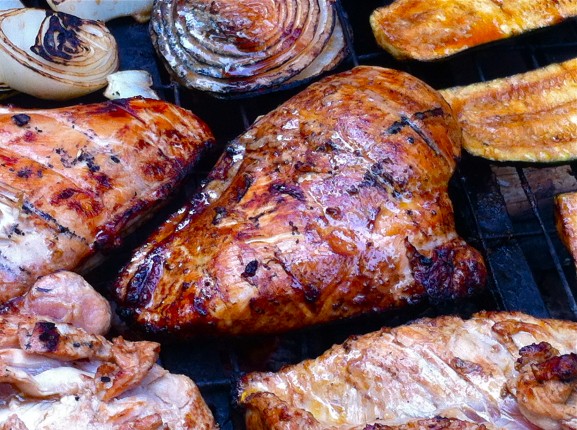 Over the Fourth of July holiday, we often spend a week with my in-laws at their cabin in the Poconos of Pennsylvania. Their house is nestled in the woods near a lake and several streams.

There is always much fishing, hiking, biking, swimming, and blueberry picking while we are here. After a good rain, the kids love to hunt for the little orange salamanders that suddenly appear along the sides of the gravel roads.

There is little TV, lots of games–many of them silly games made up by the family over the years–and plenty of food.

It is a tradition to enjoy dinner along one of the streams at least once during the week. We fly fish, grill over an open fire, and toast marshmallows for s’mores.

The following recipe has become a favorite of my in-laws since I first made it for them several summers ago and is perfect vacation food: easy to prepare in amounts for any size group.

The 3-ingredient A Third-A Third-A Third Marinade for grilled chicken was an idea from a friend years ago and has been a consistent crowd-pleaser over the years. When people ask for the recipe, they usually can’t believe how easy it is.

My dad, who generally does not cook, recently started making this. Trust me, that says something!

I often prepare this easy marinade after breakfast and let the chicken steep all day. I also like to reserve a small amount of the mixture and used it to marinate thick slices of onions, zucchini, and portobello mushrooms for about an hour before grilling. This has been a very good way to get people excited about eating their veggies! A tossed or grain-based salad rounds out the meal perfectly. 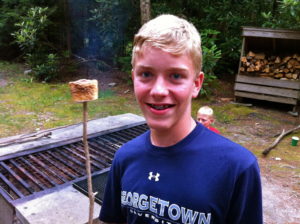 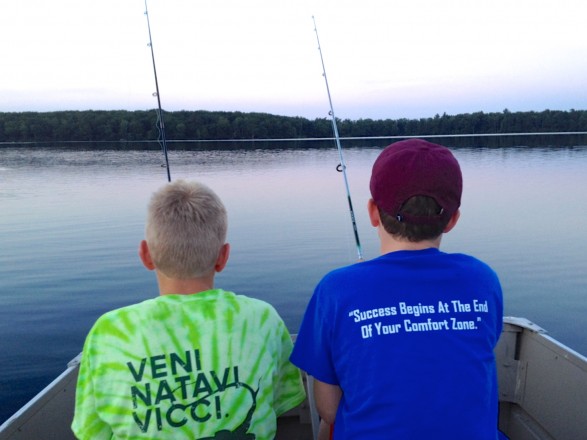 They caught nine fish between them!

“Blueberry Jammie” is a dessert we have been enjoying for many years and is reason to pick from the nearby blueberry bushes daily when in season. We have been known to make quite a few batches!

Click here for the recipe and to find out the reason for the goofy name! 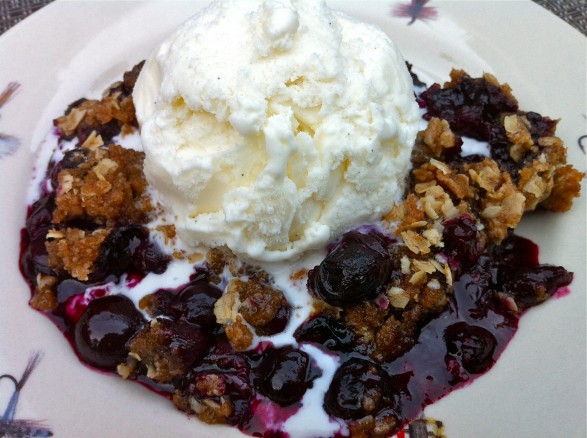 Foot Bridge Grilled Chicken (also known as A Third-A Third-A Third Chicken)
Depending on the amount of chicken you wish to grill, you may adjust the total quantity of marinade as needed. Simply use equal parts of each ingredient. Make a little extra of the mixture if you'd like to use it as a marinade for vegetables. I typically marinate veggies for about an hour prior to grilling.
Print
Ingredients
Instructions
The Fountain Avenue Kitchen https://fountainavenuekitchen.com/