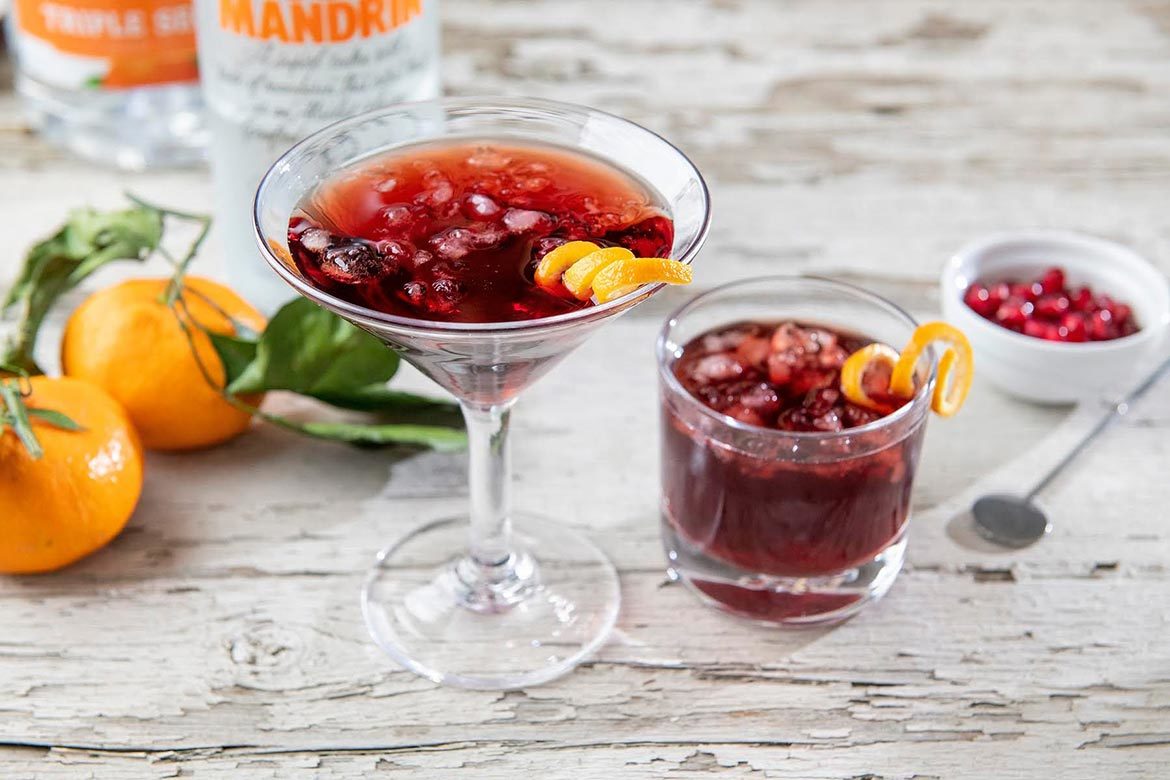 Fruity yet not overly sweet, this martini is delightfully crisp and refreshing—and not too potent! And ever wonder how to make crushed ice, or better yet, “soft” ice? I’ve included the easy how-to!

mar·ti·ni (märˈtēnē): a cocktail made from gin (or vodka) and dry vermouth, typically garnished with an olive or a twist of lemon.

According to the dictionary definition, and though I call it one, the following beverage does not qualify as a martini.

That said, as the popularity of the classic martini has soared in recent years, so has people’s love of creative variations. Think of it as old school versus new school. And as far as I’m concerned, there’s a place for both!

These days, if the drink is served in the traditional wide-rimmed glass, it seems to qualify. (As evidenced by menu items like a chocolate, Mexican, and hurricane martinis－I’ve even heard of a bikini martini!)

That said, if you don’t have the “proper” glass, don’t let that stop you. I’ve mixed this drink in short and tall glasses alike, and it still tastes great.

Also important to note: I always thought of martinis as really potent－that is to say, not a cocktail I would likely have two of. This colorful rendition is not that drink. It contains a comparatively modest ounce of vodka and a splash of triple sec.

The balance of the drink is comprised of pomegranate juice, which is more tart than sweet. It’s actually the triple sec, an orange-infused liqueur, that balances the tartness.

And remember James Bond, who enjoyed his martinis shaken, not stirred? I’ve always opted for the latter, truth be told, because it’s easier. The shaken method is often thought to ensure icy cold ingredients that are not diluted, although if you google the “right” way to make a martini,  you’ll discover two truly divergent schools of thought.

Of course, there is more to the debate where ice is concerned. 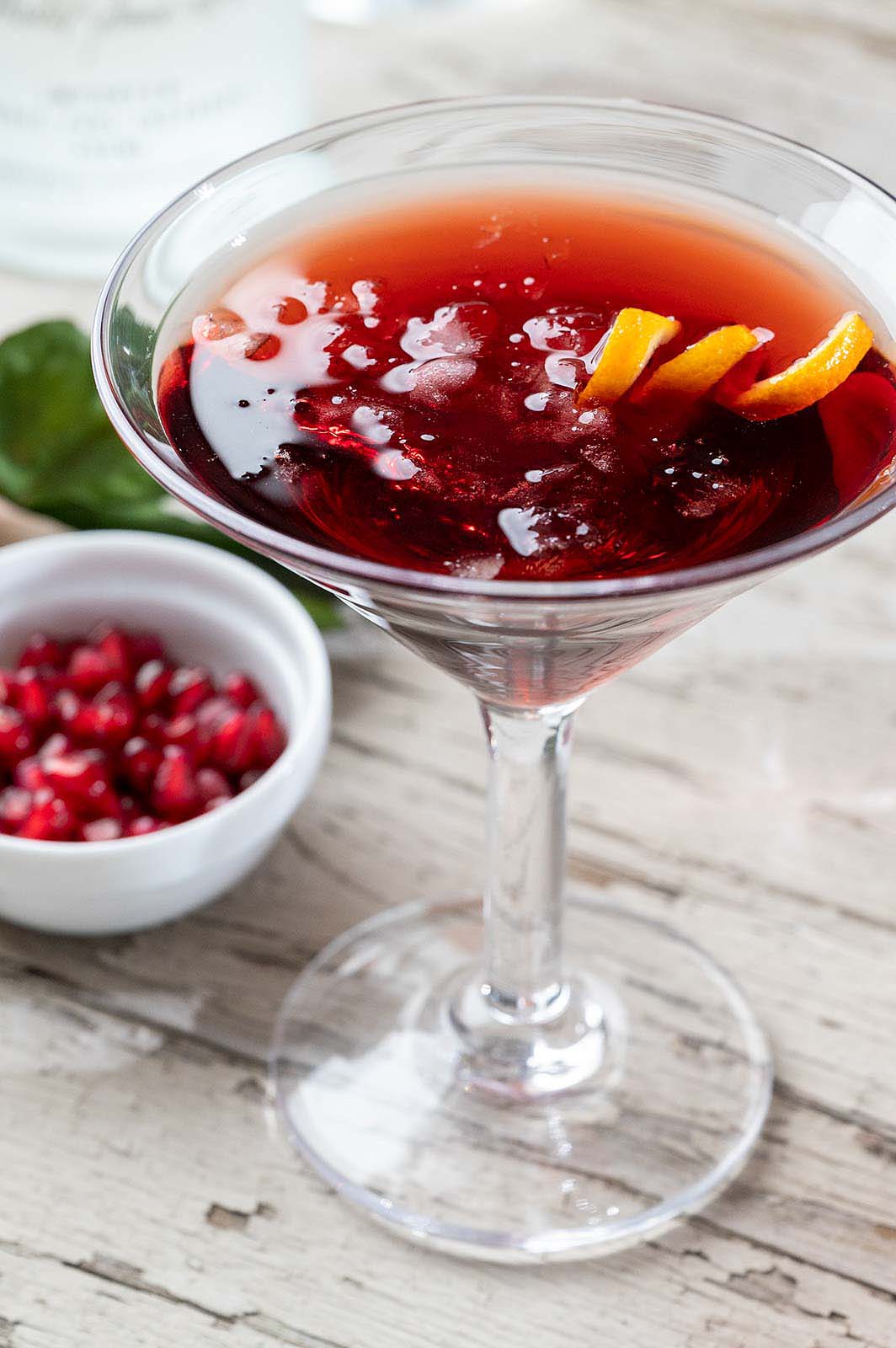 Traditional martinis are shaken or stirred with ice, and then the liquid is strained into a chilled glass. My preference is to serve this martini with a generous scoop of ice. Unlike purists, I actually like it when the ice dilutes my cocktail a little bit. Ice also increases the volume and seems to make the drink last longer.

As a side note, I love the little ice pellets that come in some fountain and bar drinks. My freezer makes the big, crescent-shaped ice cubes, but I occasionally make a batch of crushed ice to store in my freezer. I note how to do this below.

There’s also a way to make “soft” ice cubes, and I’ve mentioned that trick along with how to create a fancy-looking citrus twist. The latter is absolutely not required, but it’s a fun little extra and will even fancy up a simple club soda with a splash of juice. 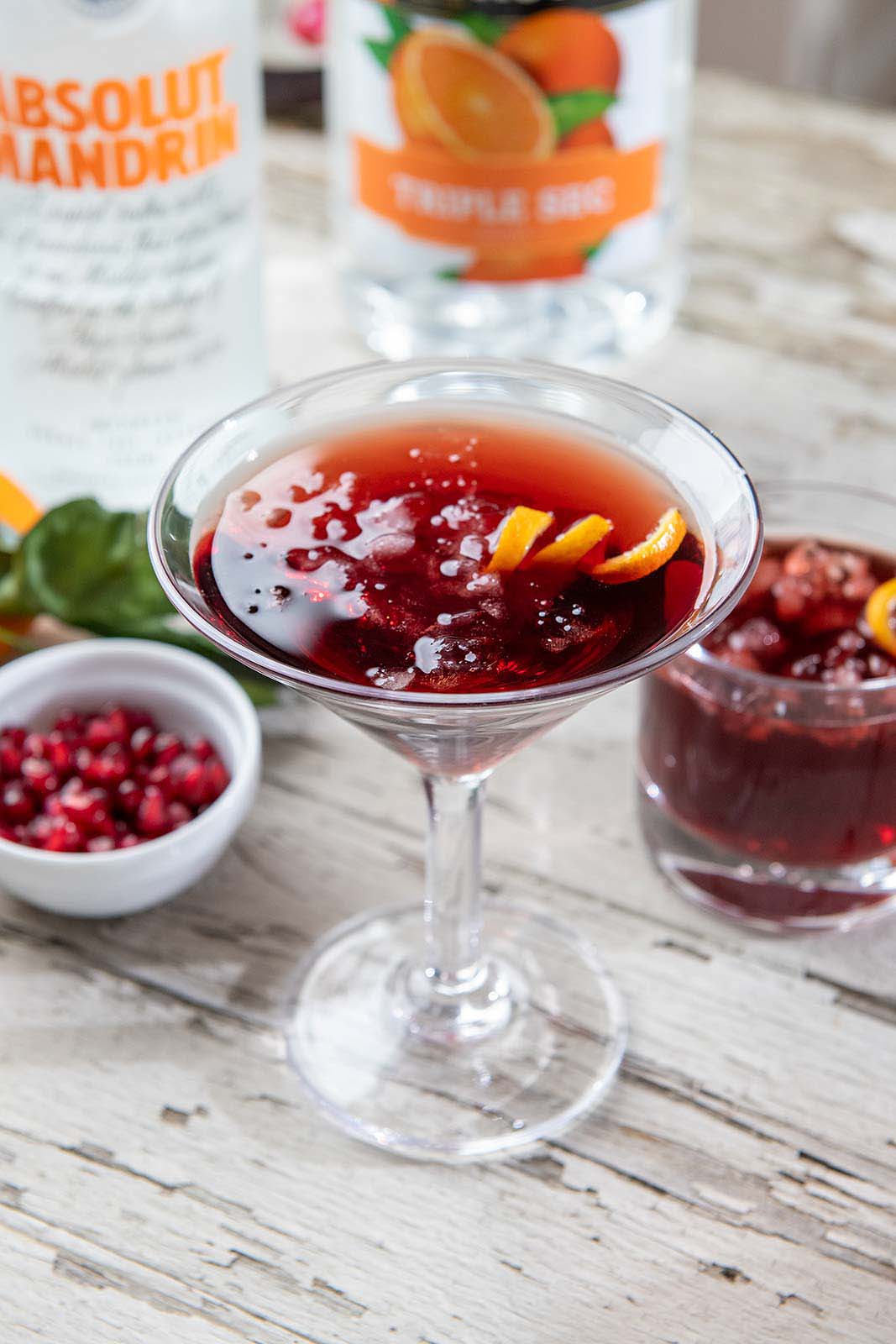 How to make a citrus twist:

Cut a thin slice from a fresh lemon, lime, or clementine. It’s best to cut the fruit in half and make  the slice from the center, where the ring will be bigger. Cut through one side of the peel, and carefully cut or pull the pulp off the peel so that you have one long thin strip of peel. Gently twist the peel into a curlicue, and hold the spiraled peel in place for 20 to 30 seconds. Use the twist to garnish beverages of choice. 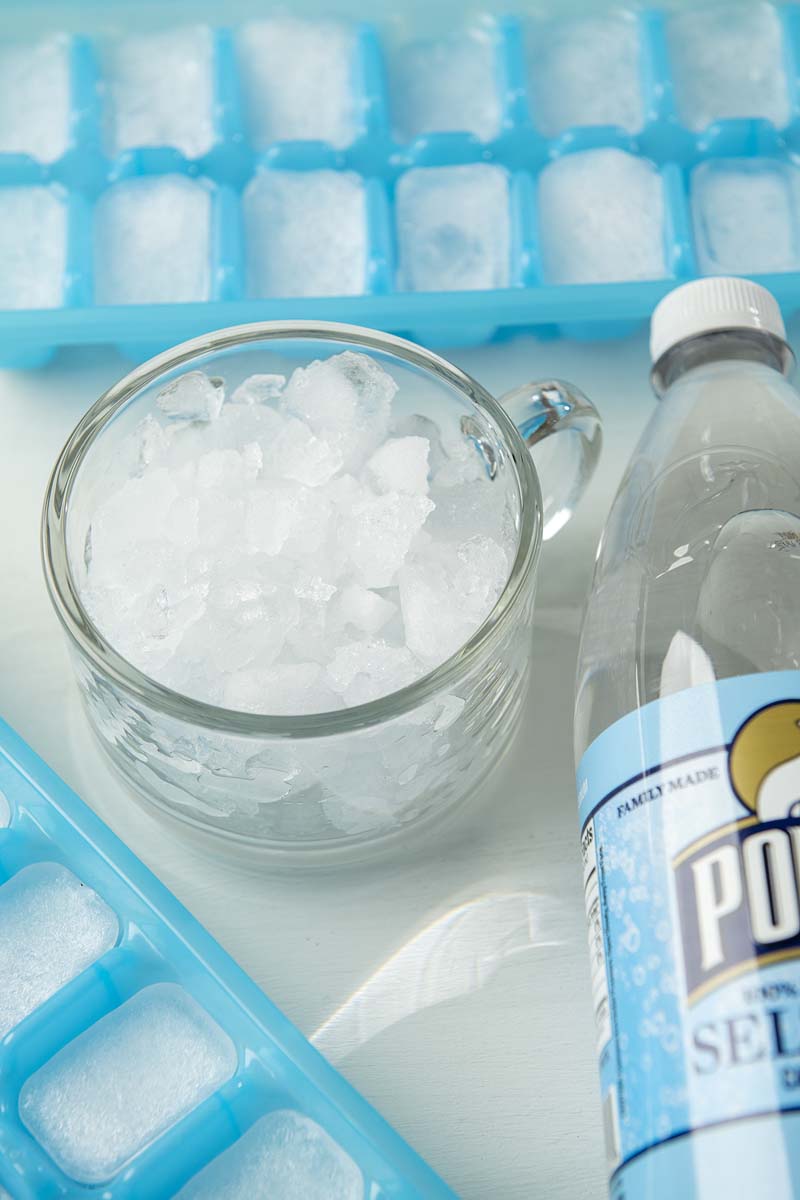 How to make crushed ice:

A high-performance blender will crush ice to the consistency of snow in 10 seconds, but unless you’re making snow cones, you may not want your ice to be quite so fine. Snow-like ice will tend to dilute a drink more quickly, too. I’ve discovered the best way to crush ice is to pulse it in quick bursts. I don’t fill the blender, but rather process about two cups at a time. The evenness/consistency of the resulting crushed ice will be somewhat dependent on the power of your blender and the type of cubes with which you’re starting (i.e., large or small crescent-shapes versus cubes).

When the ice is mostly crushed to my desired level, I pull out any remaining large cubes, set them aside, and the dump the crushed ice into a bag and place the bag in the freezer. Then I add the large cubes to another two cups or so of fresh cubes and repeat. You can make as much as you like and have a stockpile of crushed ice at the ready for your favorite drinks. If the pieces melt a bit and freeze together, just give the bag a whack on the counter to loosen.

How to make “soft” ice cubes:

Do you love those little pellets, that can be chewed without the threat of chipping a tooth? There’s an easy way to make softer ice yourself. Simply pour sparkling water (anything from Perrier or San Pellegrino to grocery store-brand seltzer water or club soda－the fizzier the better) into ice cube trays and freeze.

The carbonation creates tiny air bubbles in the ice, making the resulting cubes less dense and, therefore, less hard, than traditional ice. Note that the aerated cubes will appear whiter (less clear) than regular ice cubes for the same reason, and this is completely fine. I like to fill the ice cube trays halfway for smaller cubes. You can also make regular size cubes and then place them in a tea towel and smash the cubes with a mallet or rolling pin to make crushed ice. 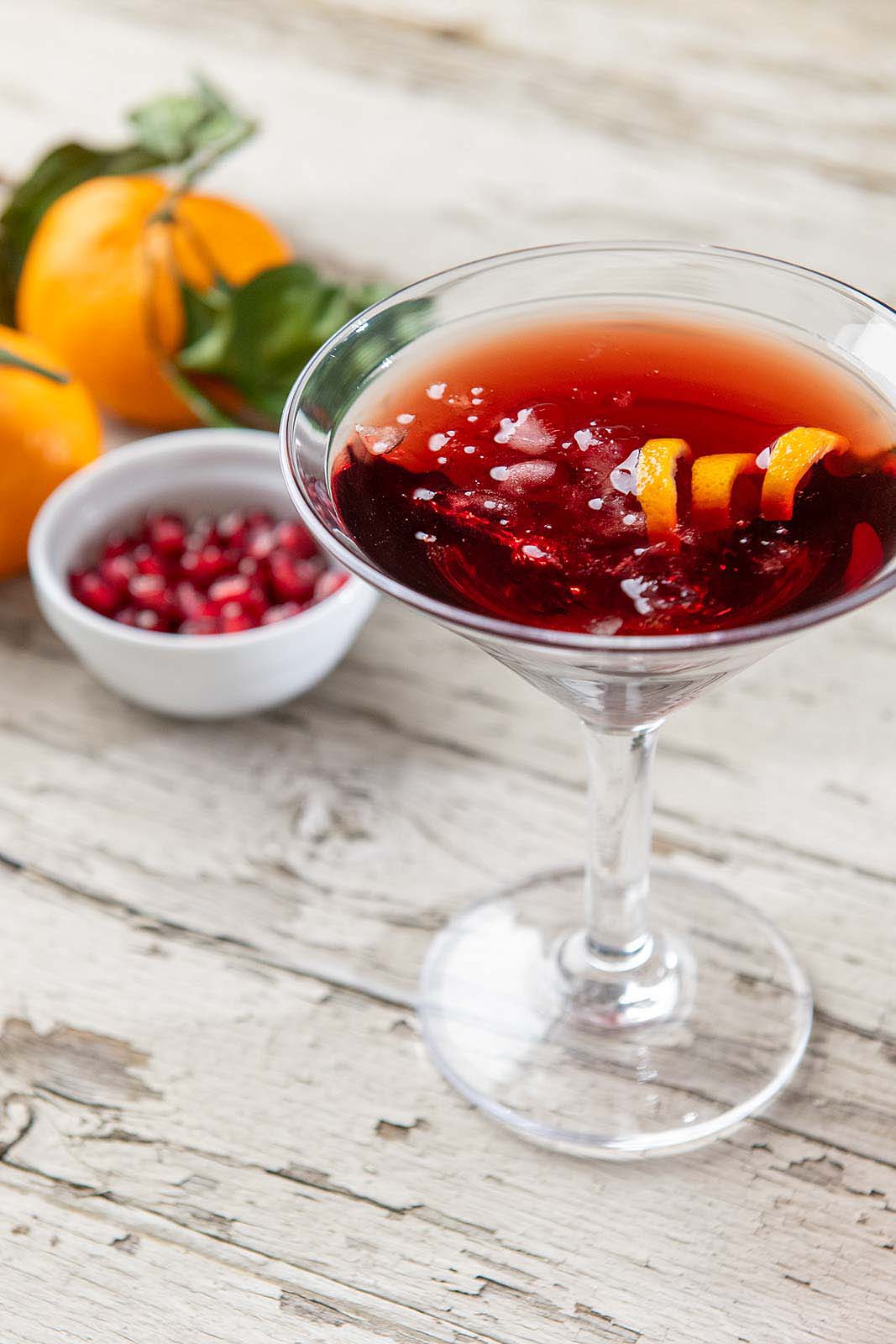 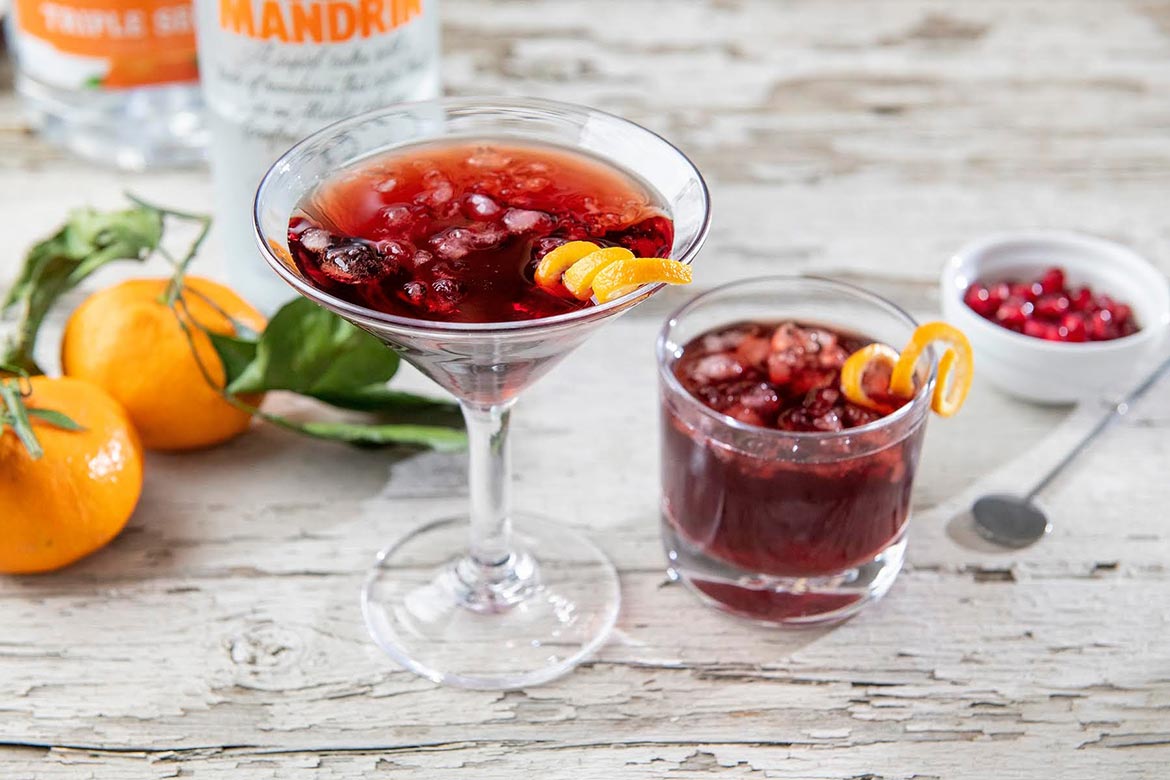 Pomegranate Martini (with sparkler, mocktail, and pitcher options)
Yield: 1 serving
Fruity yet not overly sweet, this martini is delightfully crisp and refreshing—and not too potent! And ever wonder how to make crushed ice, or better yet, "soft" ice? I've included the easy how-to above, as well as how to make a citrus twist, in the article above.
Print
Ingredients
Ingredients

Place the pomegranate juice, vodka, and triple sec in a cocktail shaker with ice cubes. Cover the shaker and shake vigorously for a few seconds until well chilled. Strain the cocktail into the martini glass, adding some crushed ice and a citrus twist or orange wheel, if desired. For a sparkler, top off with sparkling water (for a less sweet drink) or lemon-lime soda (for more sweetness). A sparkler may be served in an ice-filled Collins glass (or glass of choice).

Shortcut: Though it’s not customary, I have been known to skip the shaker and add the ingredients straight to the glass (chilled glass if I’ve thought ahead, room temp if not).

For a mocktail: Omit the vodka and replace the triple sec with 2 tablespoons (1 ounce) freshly squeezed orange or clementine juice. Top with sparkling water or lemon-lime soda to taste.

For a pitcher drink: multiply by the number of servings desired and add the pomegranate juice, vodka, and triple sec to a pitcher and chill until ready. Add an optional splash of sparkling water or soda to the pitcher, or top off individual glasses, if desired, when served.

Although pomegranate juice is on the tart side, the level of sweetness does vary slightly from one brand to another. For example, Pom was slightly sweeter than a grocery store brand I purchased recently. Also, the higher amount of triple sec will make the drink slightly sweeter. Feel free to choose the amount according to taste. A squeeze of lime is also complementary for those who enjoy an added hint of tart citrus.