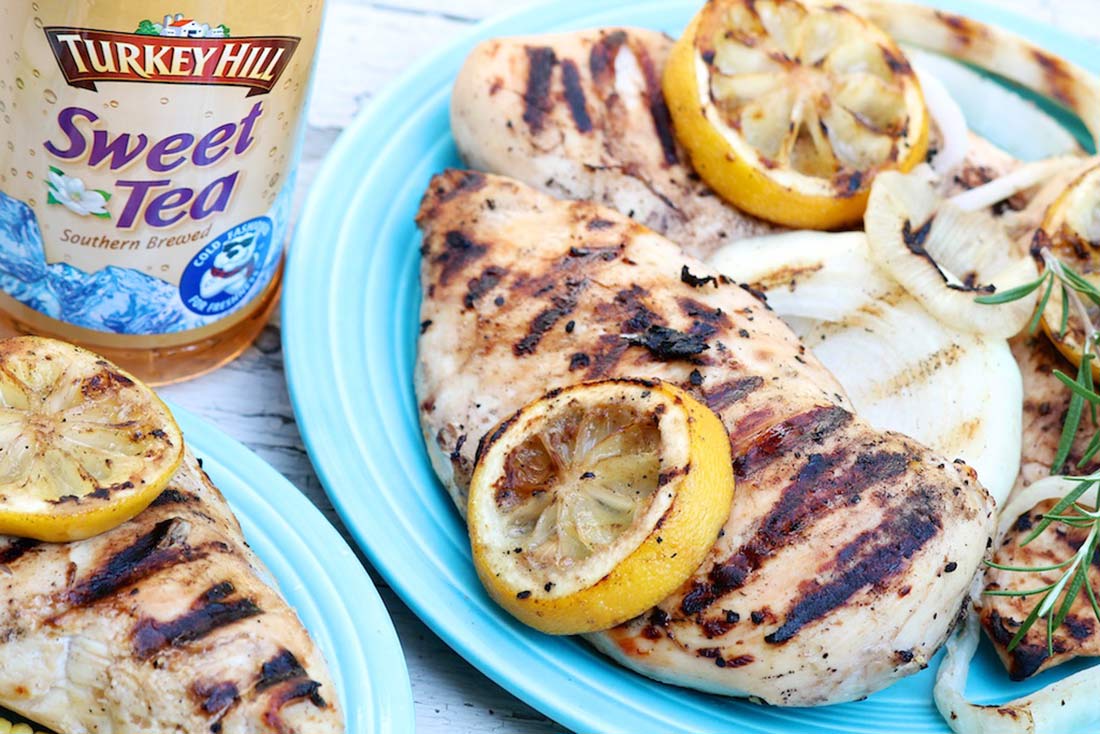 When Mitch Nugent made a point by connecting two things I love—live theater and ice cream–I perked up.

Mitch and I met last spring, shortly after the McCaskey vocal ensemble, of which my son is a member, had the opportunity to share a local stage with Broadway icon Stephen Schwartz. If his name doesn’t ring a bell, his music likely does. Schwartz wrote the music for smash Broadway hits Wicked, Godspell, and Pippin as well as lyrics for a variety of Disney films including Pocahontas and Enchanted.

Mitch is the executive producer of PRiMA, a boutique performing arts group headquartered in Lancaster, and he leveraged his New York City connections to bring the musical legend to town for a master class and a performance by Schwartz himself.  The latter featured the PRiMA professionals and the high school ensemble.

As I sat in the audience and listened to this down-to-earth musical genius sing, play the piano, and talk about his creative process, I pinched myself at the opportunity afforded this group of high school students. Thank you Mitch Nugent.

When Mitch founded PRiMA five years ago, he did it with the desire to offer fresh, musically-focused theatrical experiences. Enter the ice cream analogy. When visiting your favorite ice cream shop, the expectation is that there are many flavors, not just two or three. Everyone has unique preferences. Some like the same flavor every time, others like to branch out. Though Mitch enjoys vanilla, he prefers to try a new flavor every time. Similarly, he wants his theater group to be innovative and always offer a twist on the traditional.

Accordingly, Mitch doesn’t view his group as competing with the impressive array of performing art organizations in Lancaster. As he puts it, a growing, vibrant city deserves to have a multitude of flavors, and Mitch thrives on the fact that each group has the ability to set the bar higher and do its part to elevate the cultural arts scene.

Though PRiMA is Lancaster City-based, its performances rove among different venues. Mitch mentioned that while the organization is on the radar of those in the performing arts scenes in New York and Philadelphia, locally, many people are unaware—and he wants to change that.

Next up is Big Fish at the Willow Valley Communities Cultural Center Theater. (See details and ticket information below.) The setting for this heart-warming musical is Montgomery, Alabama, and fittingly, Mitch recently passed along a recipe given to him by his sister and brother-in-law, who happen to live in Montgomery.

Just as Mitch likes his theatrical performances to offer a twist on the traditional, Sweet Tea Chicken injects a favorite Southern drink into basic brined chicken. His sister enthusiastically reported that the concept is a current culinary rage in Alabama.

I first made the tender chicken for my in-laws, and my father-in-law, who typically prefers dark meat to light, proclaimed it the best chicken breast he’s ever eaten. To bring a few more opinions into the mix for this somewhat unusual recipe—and to experiment with the ingredients just a bit–I made the recipe several more times. I tried three different brands of sweet tea (and you could certainly brew your own), including Snapple, Sweet Leaf, and a local favorite—Turkey Hill.
When I delivered a batch to my brother and his family, figuring that the opinions of two more adults and two young girls wouldn’t hurt, my sister-in-law’s comment was, “I have no idea what’s in it, but it’s really, really, really good.”

The brine contributes unique flavor and moisture, and it’s so easy to prepare. Leftovers are delicious, as is, or will add extra flavor to your favorite chicken salad recipe. (We especially the leftovers in Summer Breeze Chicken Salad.) 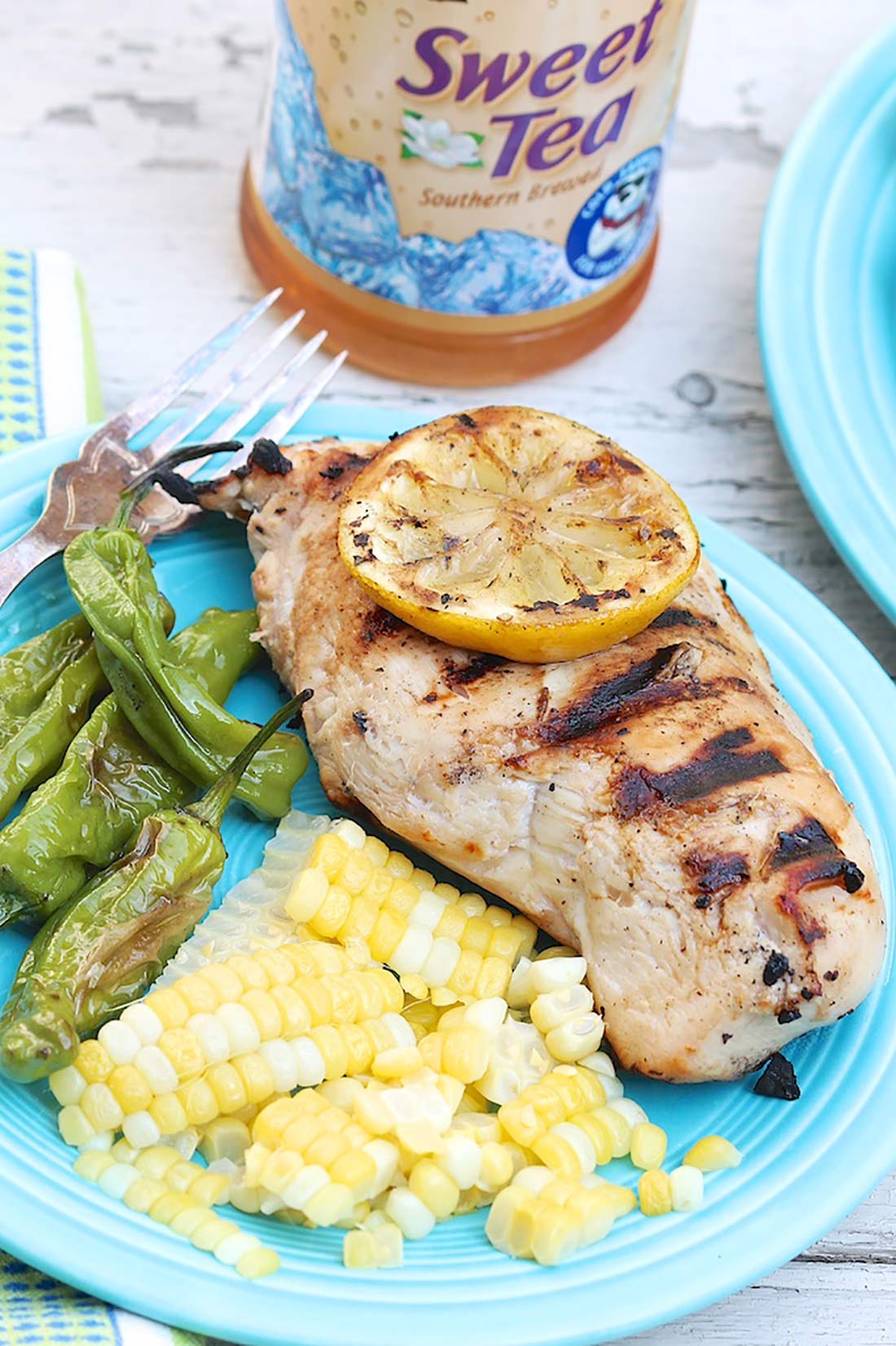 If you’re local and would like to see them in action…  (Note: this show has finished its run but current season can be viewed through the link, below.)
PRiMA’s Next Show: Big Fish
When: September 23, 25, & October 2  |  7PM
Where: Willow Valley Communities Cultural Center Theater (900 Willow Valley Lakes Drive, Lancaster PA 17584)
For more information and/or tickets, visit www.primatheatre.org 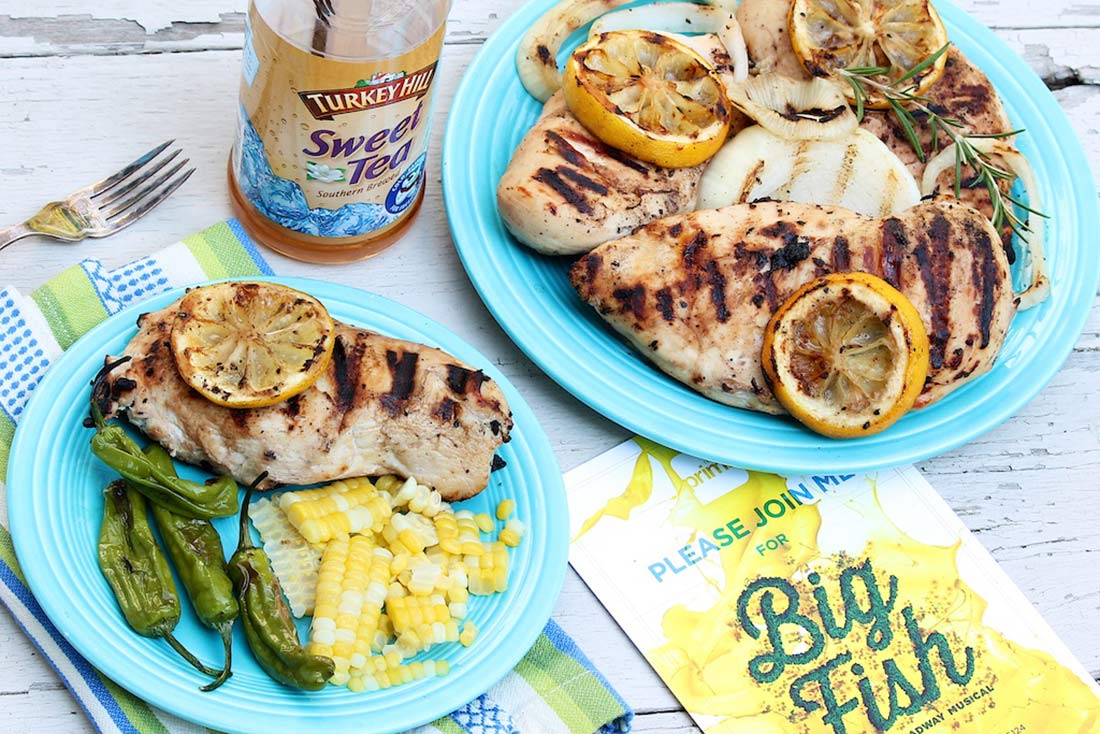