An Education in Cheese…Stretching Mozzarella

Thanks to my ongoing flavor journey with Sargento Cheese and Rick Bayless, I have been quite happily up to my elbows in cheese…sometimes literally!  When I recently discovered a cheese making class offered at a local market by the name of Lemon Street in conjunction with Essen Cooking School, I signed up immediately.  That this cheese class was offered by Rynn Caputo, owner (along with husband, Dave) of Caputo Brothers Creamery, was a bonus of which I was as yet unaware.

Rynn opened the class with a brief and entertaining introduction:  After a year of dating, Rynn and Dave, who both worked in corporate America, became engaged during a trip to Italy. On the second day of their subsequent honeymoon they decided to quit their jobs, move to Italy, and go to culinary school in Calabria.  Though they did not originally intend to be cheese makers upon returning to the States–Dave had his sites on being a chef–they wanted to recreate the exquisite fresh mozzarella they grew to love while living in Italy.

While many techniques for making cheese involve adding lemon juice, vinegar, or citric acid to heated milk, causing the milk to coagulate and separate into curds and whey, the Caputos make their cheese the traditional way, adding live cultures (more commonly known as bacteria) to produce an authentic, high quality cheese.  Interestingly, Rynn initially experimented with various combinations of twenty-some cultures until she hit upon a mozzarella that she and Dave both knew was “it”.  “It” being the cheese they knew and loved from their time in Italy.

When Rynn later developed a process whereby fresh mozzarella curd could be frozen and later thawed and stretched into fresh mozzarella, she unwittingly did something that no one else had done.  Because mozzarella cannot successfully be frozen before or after the curd stage, this made it possible for anyone from a restaurant chef to a home cook to produce artisanal quality cheese and enjoy it at the peak of freshness and flavor.  And people took notice.  There was suddenly an enormous demand for their product.  Six of the top ten restaurants in New York City buy their curd so they can offer the freshest mozzarella–mozzarella that never sees the inside of the refrigerator and tastes altogether different than any fresh mozzarella I have tasted to date.

The curd itself is produced when milk is heated and cultures are added.  This starts a fermentation process that causes coagulation during which the whey rises to the top and the curds to sink to the bottom.  The pH will fall, and once it hits 5.2, the curd may be stretched immediately into mozzarella or, as Rynn discovered, frozen to stop the fermentation.  During the course of the evening, Rynn used these curds to show us the stretching process several times.  She started by crumbling the curds and salting them.  Hot water (between 180-190 degrees F) was then added to soften the curds.  With her olive wood spoon, Rynn then let the curd essentially stretch itself.  She emphasized that the curds cannot be broken, but should be gently stretched for proper texture. 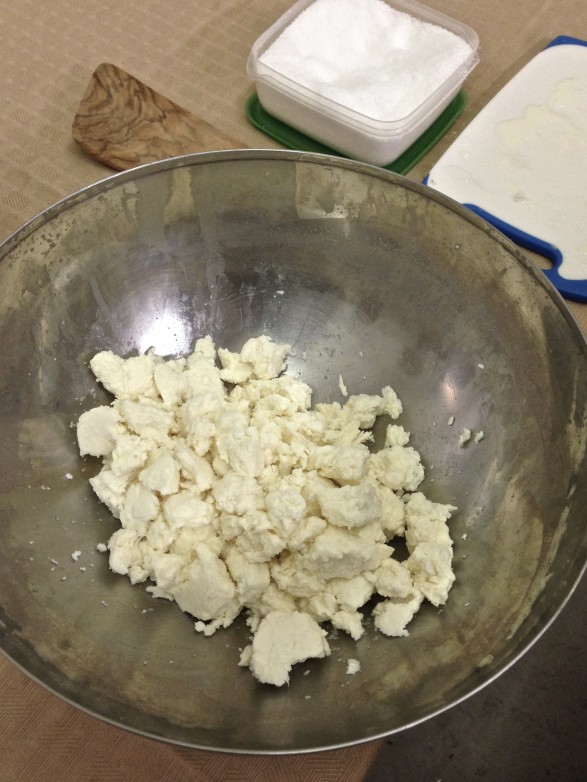 This is the fresh mozzarella curd once the whey has been removed. 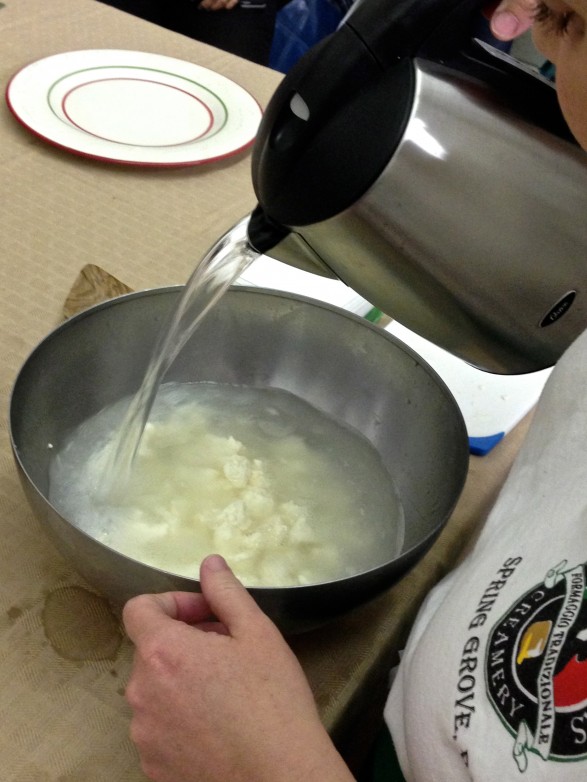 Hot water (180-190 degrees F) is added to the curd to soften it prior to stretching.

As she was expertly forming perfect rounds of mozzarella, Rynn mentioned that “the girls” (i.e, the cows) are eating fresh grass again and their spring fields are rampant with wild onion and garlic chives.  These flavors could be detected in the cheese we sampled. Another interesting fact that tied into what I learned while visiting the Sargento headquarters is that the type of live cultures, or bacteria, initially added to the milk will determine the type of cheese, be it Parmesan, Gouda, Swiss or Mozzarella.  At Sargento, I learned that to finish cheddar cheese, the curds must be pressed.  Conversely, mozzarella is stretched.  And a few other bits of trivia:  More acidic cheese melts better, and provolone is just aged mozzarella. 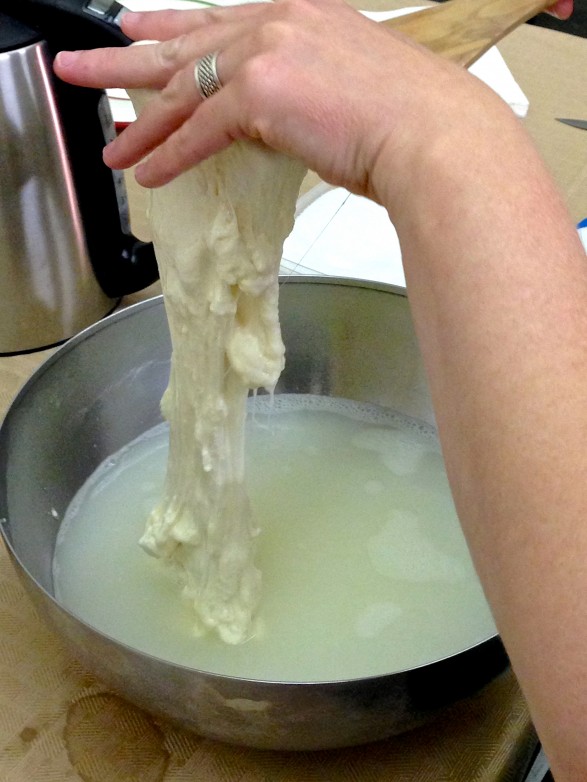 With the help of a wooden spoon, Rynn begins to stretch the mozzarella. Specifically, the mozzarella falls and gently stretches itself. This prevents the proteins from breaking which would alter the final texture. 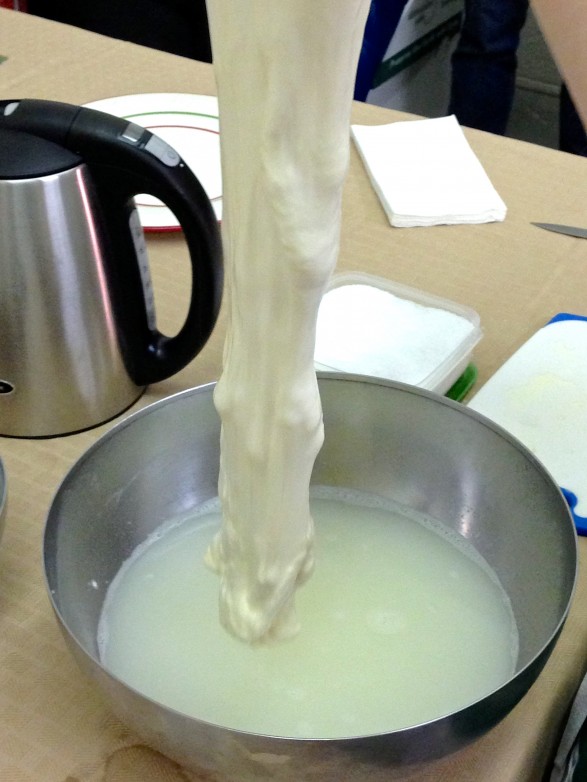 Very quickly, the mozzarella curd changes from lumpy to smooth and glossy. 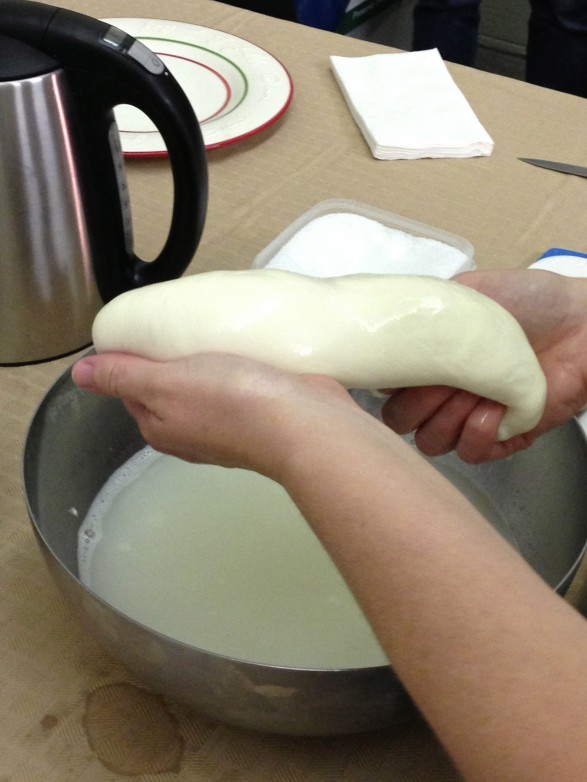 Ready to form into desired-size balls… 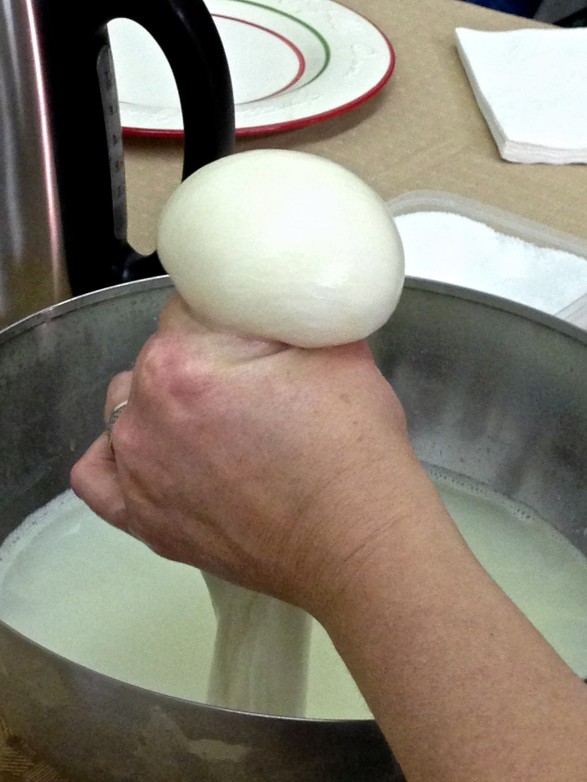 From one pound of curd, Rynn forms three standard-sized balls. Ideally, they should be kept unrefrigerated and eaten within the day.

As Rynn stretched the curds into soft, flavorful mozzarella, we sampled each time.  The first time, we ate it as is.  The second time, she drizzled the cheese with good olive oil to demonstrate how it might work in a savory application.  The third time, she drizzled it with a dark chocolate balsamic vinegar and sprinkled with vanilla bean sea salt to showcase its sweeter side.  This brought back memories of cheddar cheese tasting in Milwaukee, only there we were comparing cheeses that had been aged between one and eleven years.  In contrast, we were now tasting seconds-old cheese.  If cheese has a life cycle, I would say that each stage is vastly different yet more interesting and uniquely delicious than I had ever really considered prior to this journey I have undertaken.

When asked about the traditional pairing of mozzarella and tomatoes, Rynn said the Caputos eat with the seasons on their farm, which means they only eat tomatoes in August and September.  As most people associate fresh mozzarella with tomatoes and pizza, Rynn noted that they enjoy this cheese 365 days a year in ways many people have probably not considered.  She particularly enjoys pairing the mozzarella with pears, apples and a favorite strawberry chutney.  They make a beet caprese salad and frequently pair it with onions.  They even use the “make water” (which can be seen in the bowl pictured above) to flavor much of their cooking.

As I first considered at Sargento, the freshness and quality of the milk used to produce the cheese really does matter.  For example, cows that have recently been treated with antibiotics will have milk ill-suited for cheese, as residual antibiotics will kill the bacteria necessary for the cheese to properly develop.  At the Caputo farm, cows eating the fresh spring grass produce a milk that has a slightly different flavor than when they are grazing in the same fields in late summer or fall.     And that flavor translates to the cheese.

If you live in the vicinity of  Spring Grove, Pennsylvania, home to Caputo Brother’s Creamery, you may taste the freshly-made cheese firsthand at one of their farm table dinners.  These dinners are 5-course, traditional Italian meals provided by the Caputos in their 194-year-old farmhouse.  More information may be found, along with helpful videos of the complete mozzarella stretching process, at their website which you may view by clicking here.

I have a container of curds in my freezer, ready to be thawed and stretched.  My mozzarella balls might not look as perfect as Rynn’s, but I know they will taste amazing!