I’m pretty sure I was a college graduate before I witnessed someone putting anything but butter and salt on corn on the cob. After all, I grew up in Lancaster County where corn is frequently consumed the day it is picked.

When produce is that fresh, the flavor needs little enhancement. In fact, many would consider it taboo to coat those sweet, golden kernels with anything that masked the flavor.

In my early Fountain Avenue Kitchen days, I asked my blog readers how they preferred to top this seasonal favorite. Answers varied by region and included such options as barbecue sauce, Old Bay seasoning, mayonnaise, pesto, and honey mustard.

One reader said she tops her corn with olive oil, shredded coconut, chopped cilantro and minced garlic before wrapping it in foil and grilling it. Quite a few mentioned ingredients like lime juice, cotija or feta cheese, and cilantro.

As strange as the latter toppings sounded, I soon learned that they’re components of a popular dish called elote. Spanish for the word for corncob, elote is also known as Mexican street corn because it’s commonly sold both on the street and at festivals in Mexico. 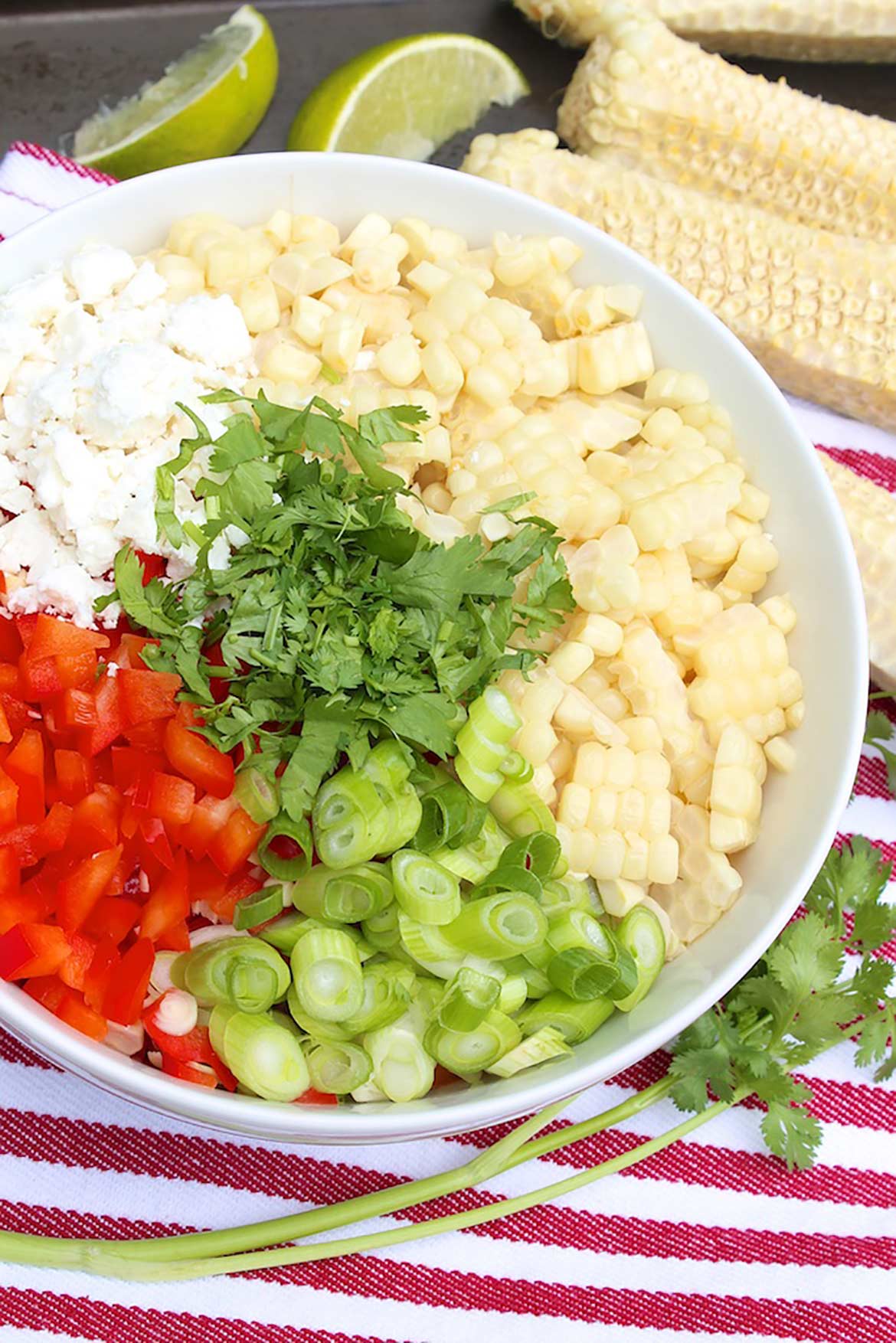 The basic formula is as follows: a layer of spicy Mexican crema (similar to sour cream) is slathered on the roasted corn before it’s rolled in crumbled cotija cheese (which is much like feta). Chili powder, cilantro, and lime juice round out the flavors, and it’s often served on a stick.

Esquites is considered the off-the-cob version of elote; the following recipe is my take on that flavorful fare. The addition of a few extra veggies places this easy side dish in the salad category, yet it easily fills the role of vegetable or starch. It’s versatile enough to complement to steak, chicken, seafood, or tacos. On a hot night, consider serving it as part of a cold salad medley.

I have made this salad many times for family, friends and neighbors and it consistently receives glowing reviews. The flavor improves over time as the tangy lime juice mellows and contributes a bright taste that is memorable yet not overwhelming.

For added ease, I’ve made a habit of buying several extra ears whenever corn on the cob is on the menu. After cooking, I immediately set aside enough ears to make this salad another night. The cook-once-eat-twice method can be a savior on a busy weeknight and will relieve you of one extra step when cooking for company. 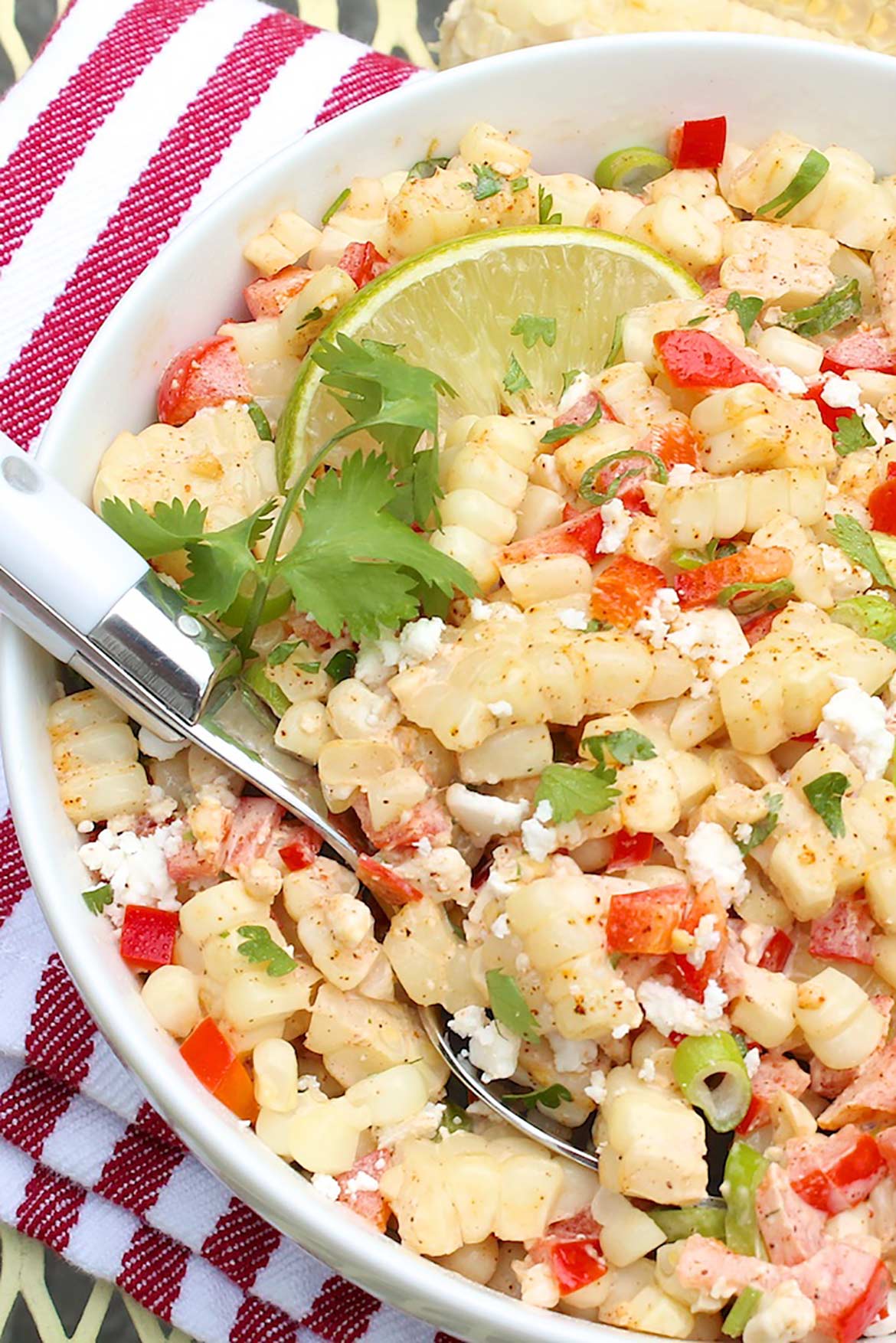 Tip for locals: Cotija cheese is difficult to find in Lancaster. After much searching, I found it at El Pueblito on Dillerville Road where it’s sold as a 12-ounce wedge. Just a tip for those seeking authenticity, but again, feta cheese is a worthy substitute.

Many frequent readers of this blog have also enjoyed this fresh-tasting recipe for Corn and Cucumber Salad with Basil and Chives.  It’s an oldie-but-goodie that can be whipped up in minutes and is always a hit with company.🌽 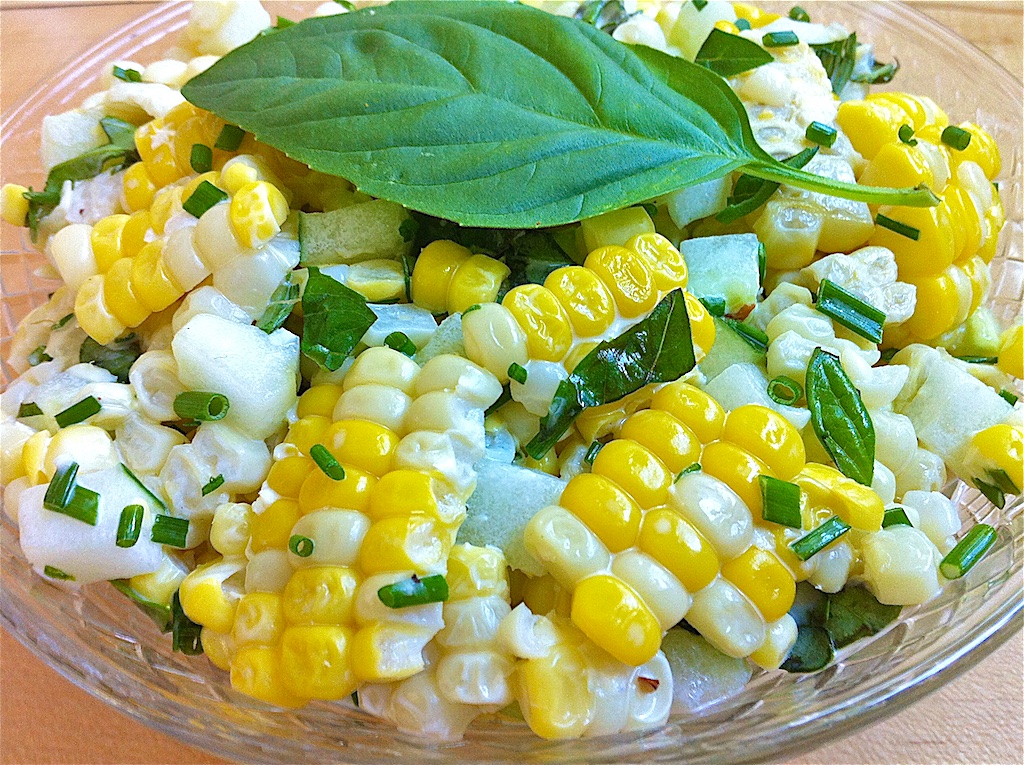 Mexican Street Corn Salad
Yield: 6-8 side dish servings
Since I first posted this recipe, it has become quite popular with family and friends and, based on popular demand, I now always add the optional avocado--or use it as a topping if I expect leftovers. When I have cherry or grape tomatoes on hand, I regularly add a handful of those, too.
Print
Ingredients
Instructions
Notes

*You may use frozen and thawed corn when fresh isn’t available. In season, I often cook extra corn on the cob one evening, and then cool and refrigerate it to make this salad especially easy to prepare another night. For a slightly different flavor–or to perk up thawed, frozen corn–you can sear the corn in an oiled skillet over medium-high heat until the corn is lightly browned.