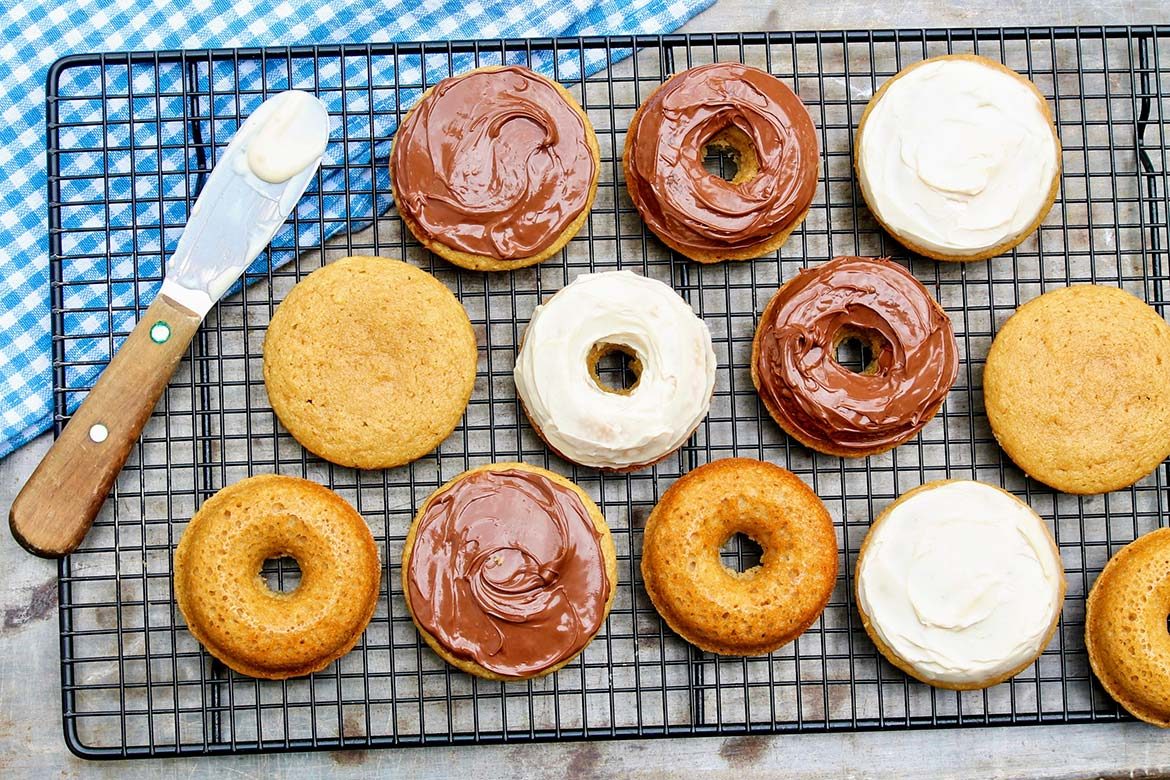 No messy frying step needed for deliciously satisfying, grain-free donuts. No donut pan? No problem. The recipe can be made as muffins instead!

I have a clear vision of the best donut I ever ate. It was from a cafe called Philz during a visit to Los Angeles several years ago.

My family and I stopped in to grab an early morning coffee, and the lightly glazed donuts tempted us from a glass dome beside the cash register.

A textural harmony of light and airy with a bit of cakey denseness, the donut was sweet, but not overly so, and basically my idea of pure donut perfection. Had I not been told, I never would have guessed it was vegan and gluten-free.

It was a reminder that ingredients－even untraditional ones－can come together in all sorts of delicious ways.

Curiously, I recently read that, in many cultures, donuts are thought to bring good luck, as the round shape symbolizes coming full circle.

So while a new year often brings talk of resolutions, many of which involve giving up treats we enjoy, I decided to offer a treat to embrace and feel good about.

I must point out that this donut is not a replica of the cafe donut I occasionally dream about. That one was over-sized and fried, whereas this one is baked and the portion size is more restrained. (Perfect for those who like to eat two!) And though my donut is gluten-free, it is not vegan.

The flavor is mildly nutty with undertones of vanilla and maple. The super-fine grind of blanched almond flour creates a tender, light crumb, and the eggs supply a bit of heft. Importantly, these gems are not in the least bit dry.

Although these donuts aren’t overly decadent, they do offer a truly simple, homemade fix that my family enjoys.

While the cafe donut was glazed, I offer a few easy alternatives: a two-ingredient maple icing (my favorite), a cinnamon sugar sprinkle, Nutella…or nothing at all. My husband is a fan of the unadorned donut. Until recently my sons preferred Nutella, but more recently they’ve opted for the maple icing. 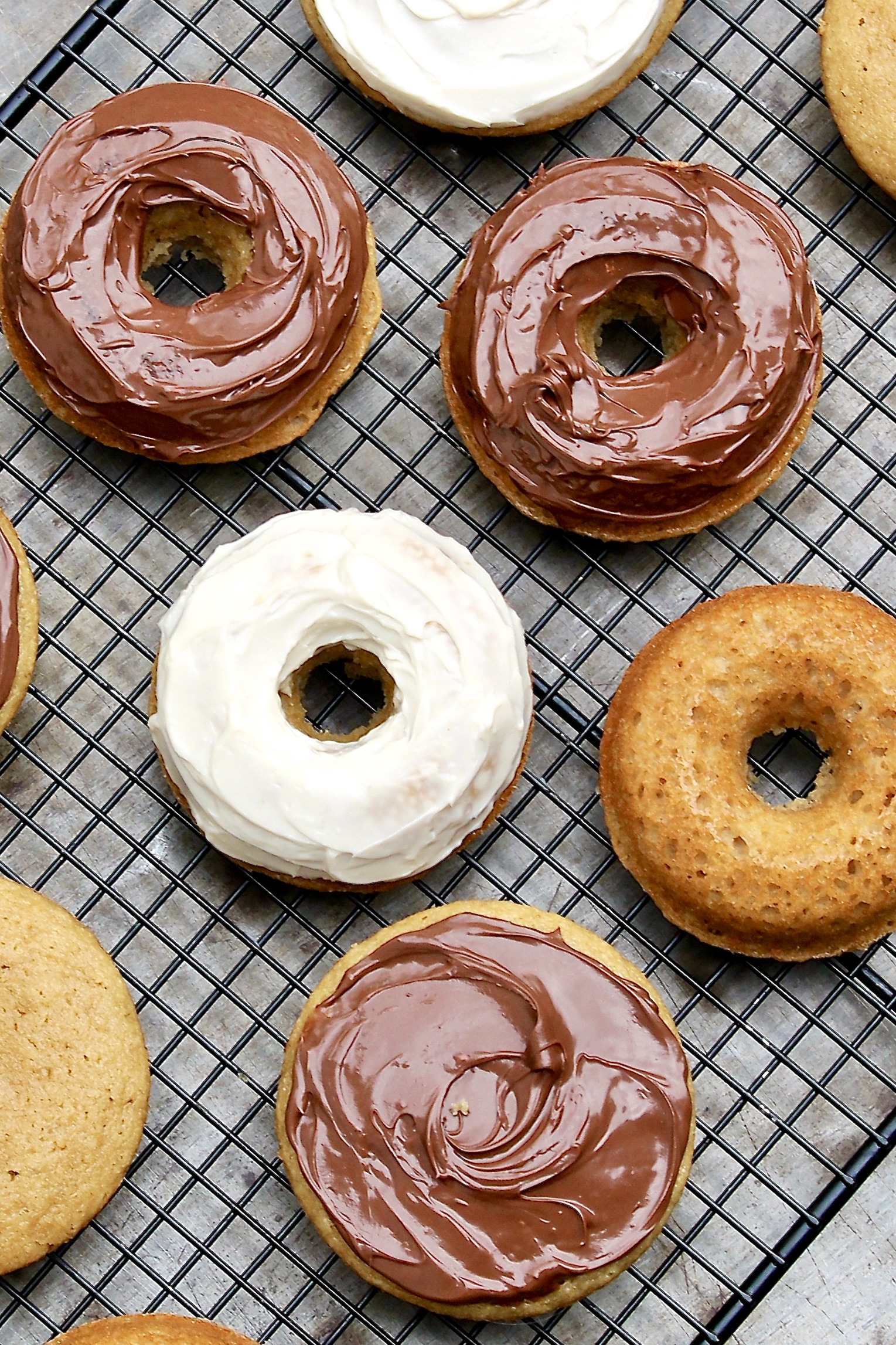 As mentioned, the end of one year and the start of another typically comes with talk of resolutions, diets, and the notion that we should be giving up things. But in one way or another, we gave up a lot last year.

As such, it seemed like far more fun to come up with a list of things to enjoy, along with some lucky reasons why.

So as I sign off with wishes for a year filled with health, happiness, and good fortune, I leave you with my lucky list!

Foods to enjoy in the new year…and why: 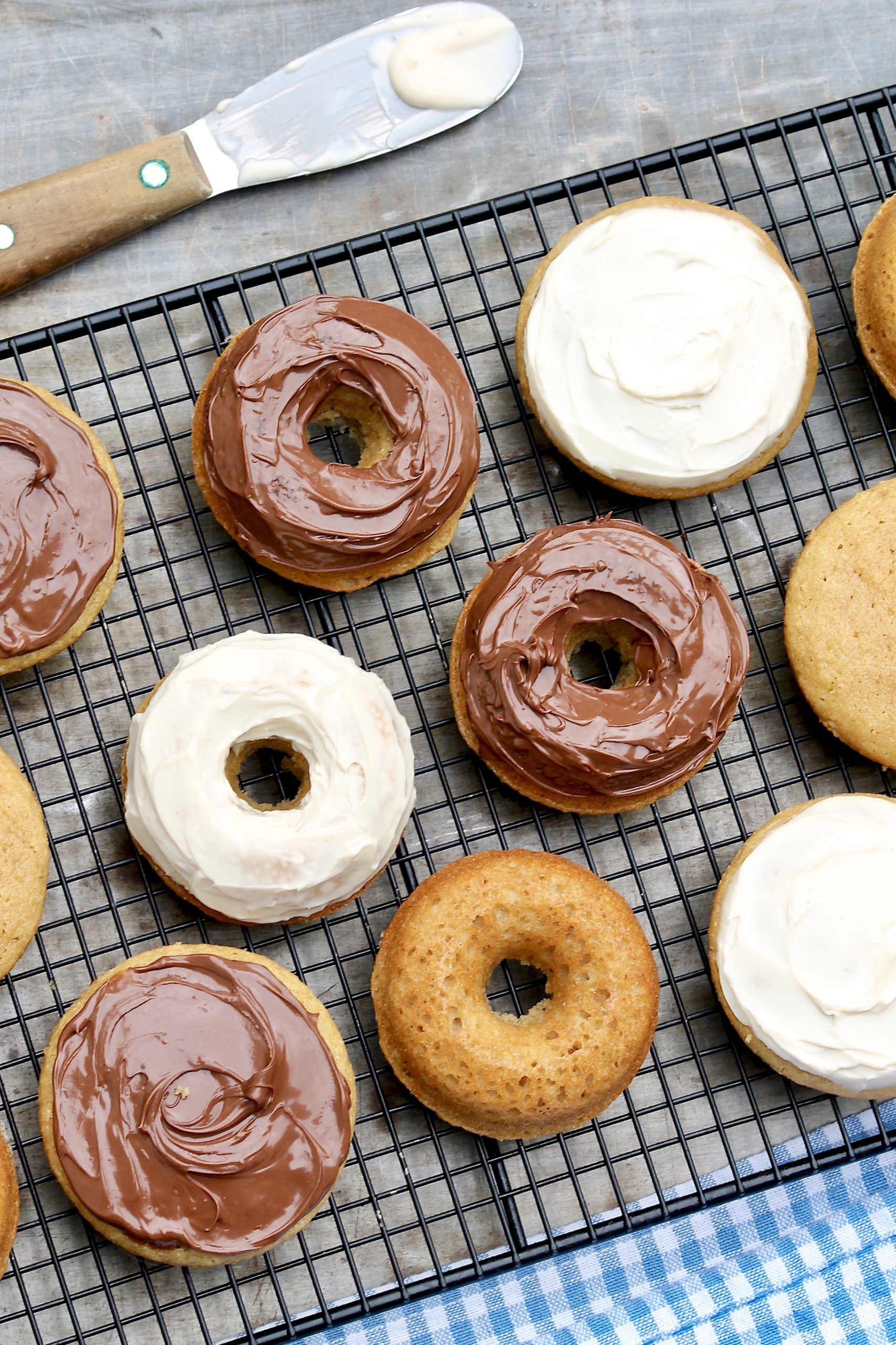 This recipe is ideal for those who appreciate a small batch, although the recipe is easy to double (as pictured). Unfrosted, the baked and cooled donuts do freeze well. 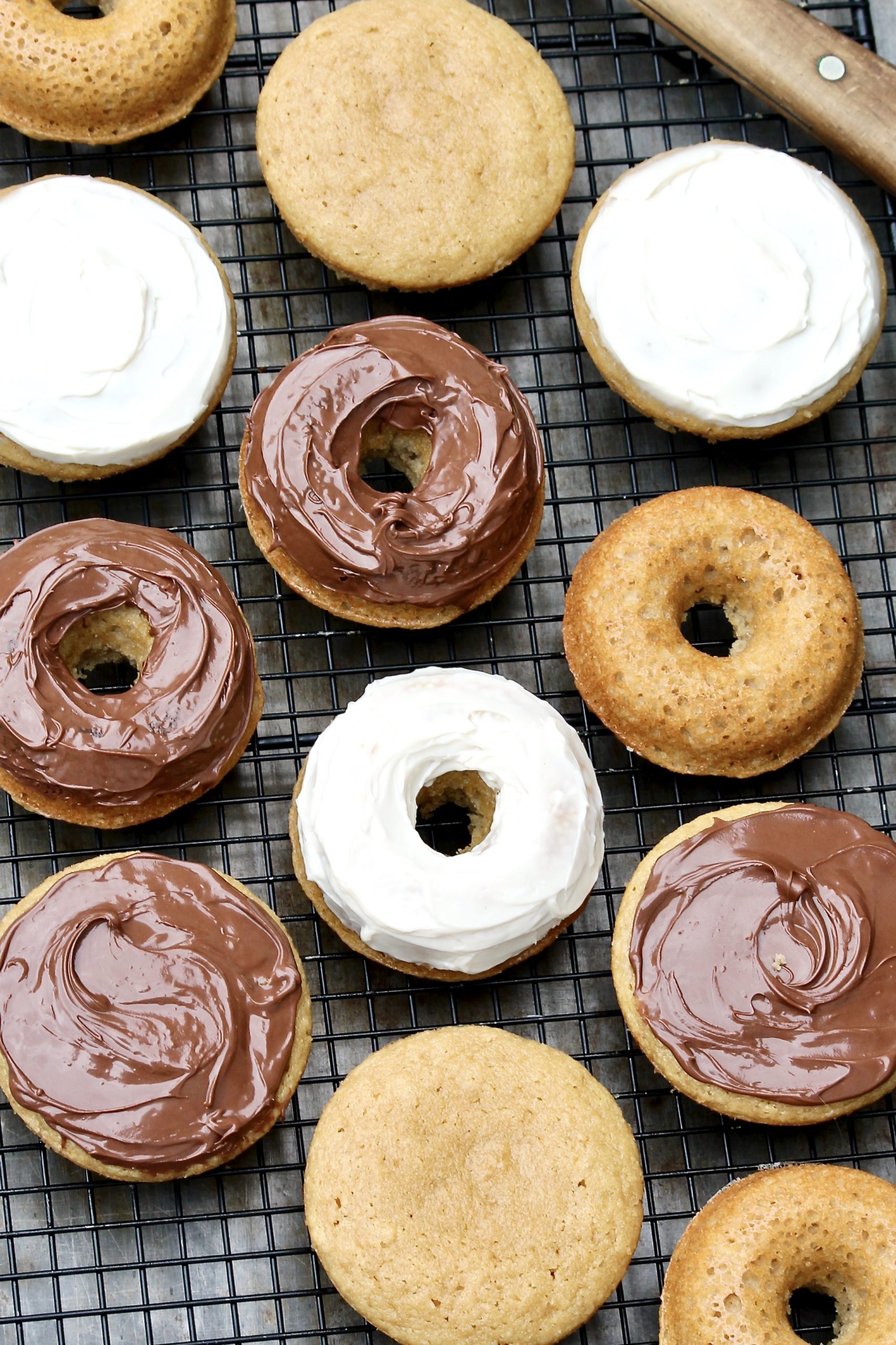 Frying is messy. Baking is easier and can be quite tasty, too. These donuts will also satisfying a wide variety of eating styles as they are gluten- and grain-free, naturally sweetened, and oil-free. 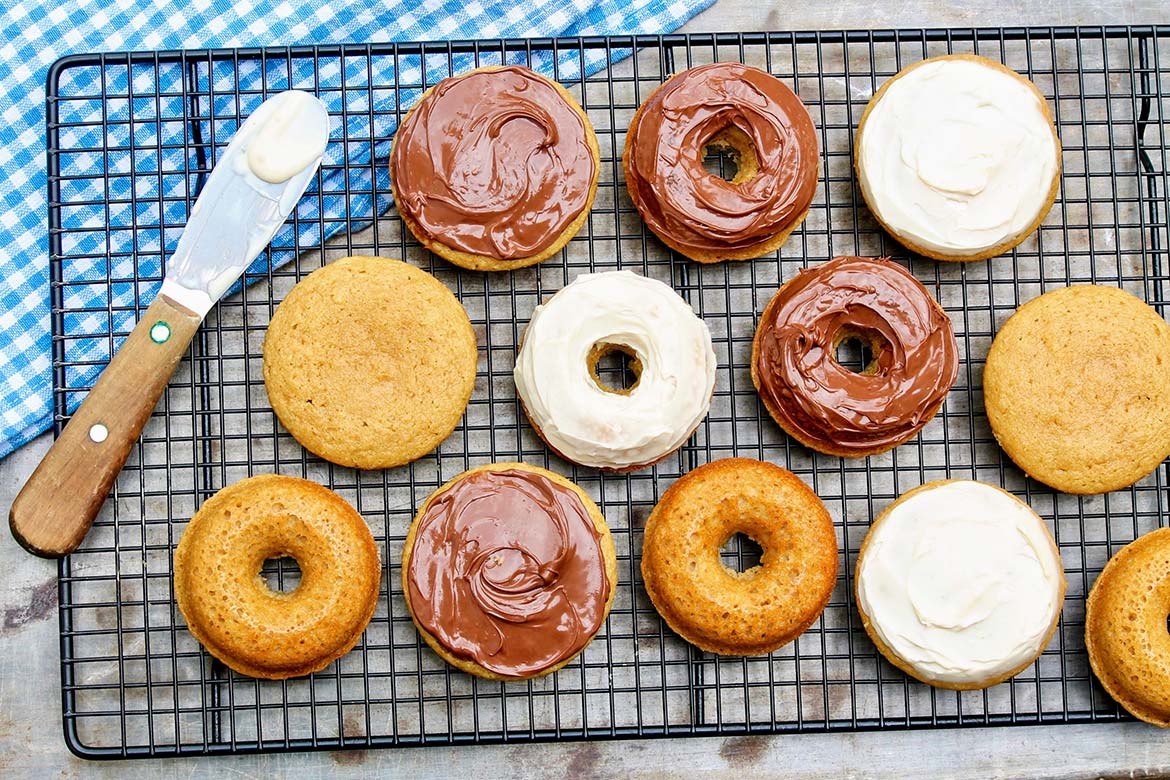 Baked Almond Cake Donuts (or Muffins)
Yield: 6 donuts or muffins (recipe is easy to double)
Nothing against the fluffier, yeasted counterparts, but there’s something so satisfying about a cake donut. And when there's no messy frying involved and the donuts offer grain-free appeal and easy icing options (or no icing at all), what's not to love?
Print
Ingredients
Instructions

Preheat the oven to 300℉. (That’s a little lower than usual－not a typo.) Grease a 6-cup donut or jumbo muffin pan and set aside. (You may use a regular muffin pan. You will simply need to add a few minutes to the bake time.)

In a medium mixing bowl, whisk the eggs, and then stir in the remaining wet ingredients. Add the dry ingredients, and stir until smooth. Transfer the batter to the donut or muffin pan, evenly filling the cups, and sprinkle with coarse or cinnamon sugar, if using.

Bake for 10-15 minutes and remove the pan as soon as the donuts are just firm in the center. (Check after 10 minutes, adding time, as needed, until you know how long these take in your oven. In my oven, the donuts take 13 minutes and the jumbo muffins take 15 minutes. Precise time will vary slightly based on oven and pan used.)

Cool for several minutes and then remove to a cooling rack. Eat, as is, or frost as desired once completely cool.

Storage: The donuts will stay fresh for 3-4 days when stored in an airtight container either in the refrigerator or at room temperature. If frosted with an ingredient that requires refrigeration, like cream cheese, opt for the fridge. Unfrosted, the baked and cooled donuts freeze well, too.

*For easy maple cream cheese frosting, mix 1-2 tablespoons pure maple syrup (or to taste) into ¼ cup of softened cream cheese. Refrigerate until ready to use.