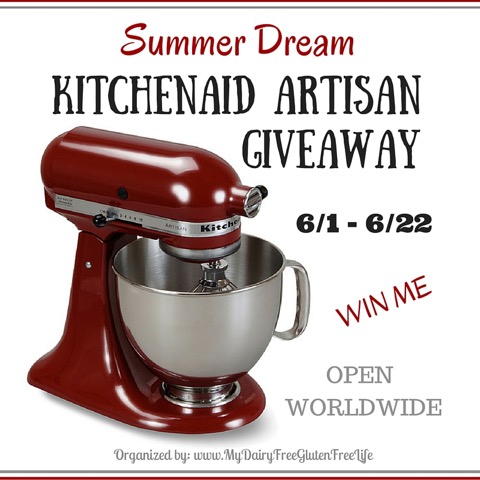 The fun continues!  There’s still time to enter this very cool Stella & Dot giveaway, but I have another one for you!

Though I don’t use my stand mixer every day, it’s one of those appliances that I am so grateful to have.  Certain tasks are just infinitely easier with its help.  As a funny aside, I will tell you a short story about how I acquired a mint green KitchenAid…

I was feeling a little down in the dumps after yet another failed in vitro attempt before finally becoming pregnant with my second son (after going through the same emotional process with my older son–for anyone struggling, have hope). For some time, I was regretting letting my grandmother’s old KitchenAid go to auction…that’s another story for another day!  I decided a shiny new model that matched the tile floor, which was sort of a rustic verdigris, would be just the thing to cheer me up.  My husband was ever-so understanding when I mentioned the lofty charge for this spur-of-the-moment purchase, and I have loved that mixer for so many reasons ever since.

Interestingly, I just read that a stand mixer is a poor choice to put on a wedding registry.  The thought was that people who are about to get married are likely not in their “forever” house and don’t know which of the many fabulous color choices may match–or not–their future kitchen.  I, for one, will say that I have moved since my purchase, and my mint green mixer doesn’t match my current kitchen, but I love it more now than I did then.  It even survived a thunderous crash when it careened off my kitchen counter while whipping on high speed.  (Note to self: Do not turn your head for a nanosecond when the mixer is whirling away at top speed.)  Anyway, the wood floor suffered a small dent, but the mixer was, shockingly,  no worse for the wear.

So if you’ve been longing for a high-capacity, quality stand mixer but haven’t taken the leap, now is your chance.  I’ve joined with a wonderful group of bloggers to celebrate summer and help one lucky reader become the proud owner of a 5-quart KitchenAid Artisan Stand Mixer.  Good luck!

Enter for a chance to win a KitchenAid 5-Qt. Artisan Stand Mixer below:
a Rafflecopter giveaway

Disclaimer: This blog did not receive compensation for the published material in this post. No purchase required to enter this giveaway and there is a limit of one entrant per household. Void where prohibited. Odds of winning are determined by the number of valid entries received. Winner will be chosen by Random.org and will be emailed via the email address used to enter the contest. New winner(s) will be chosen if original winner(s) has not responded within 48 hours of email notification. This blog is not responsible for shipment of prize(s). Giveaway Promote is responsible for all shipping costs related to prize(s). This giveaway is not administered, sponsored, endorsed by, or associated with Facebook, Twitter, Google, Pinterest or other social media outlet. Disclaimer is posted in accordance with the Federal Trade Commission 10 CFR, Part 255 Guides Concerning the Use of Endorsements and Testimonials in Advertising.