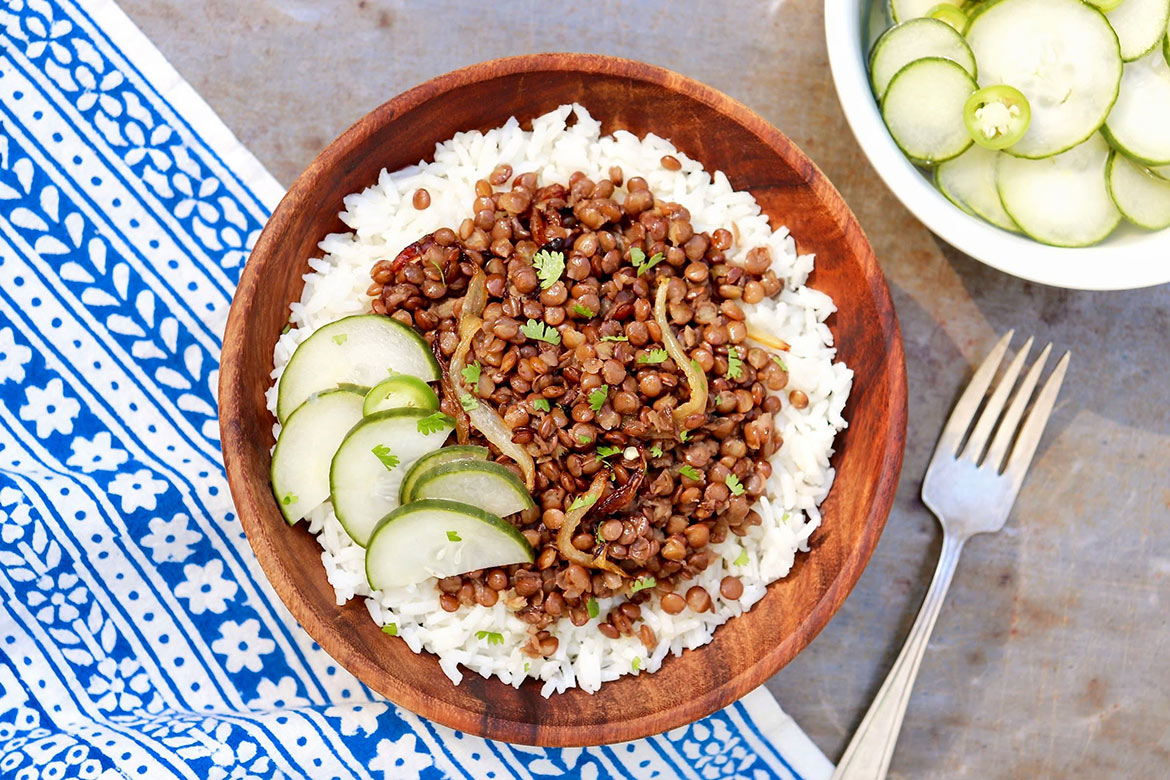 This “every day” South Asian dish is healthy comfort food at its best and requires just a short list of basic ingredients.

When it comes to sharing ethnic fare, I often mention that a given recipe is “inspired by” a certain style of cuisine and make no claims to authenticity. The following dish, however, is authentically Nepali with an easy Indian variation. It’s “every day” food that relies on basic ingredients and is equal parts healthy and comforting. Most important, however, is the inspiring story shared by the immigrants behind this recipe.

By definition, a bridge is a structure built to span a physical obstacle in order to provide smooth passage over the obstacle. As such, it’s a fitting name for a local organization that uses food and culture to forge meaningful connections with our refugee community.

By coordinating dinners hosted by and in the homes of local refugee families in Lancaster, Pennsylvania, Bridge provides a way for those families to share their stories and forge meaningful connections with their new neighbors.

I recently organized a small group to take part in one of the dinners, and we were warmly welcomed into the home of a Nepali family for an evening of food and conversation.

We read so much in the news these days about the refugee experience, but face-to-face conversation reveals a far more complete story.

In the past, when I thought of Nepal, my mind went to Mount Everest and sherpas. After meeting Tika and her family, I think of refugee camps.

Tika came to Lancaster when she was 16-years-old, having lived in a refugee camp since she was a baby. All of her childhood memories center around life in the camp, and many of them are happy memories: playing “King” ( a version of tag), with friends or going to school, where approximately 70 children sat on the floor of a room no bigger, Tika said, than the modest living room of her family’s current home.

We were invited to sit on their comfortable sofa, where Tika’s mother treated us to steamy, creamy mugs of spiced chai. The aromas wafting from the kitchen were intoxicating, and after chatting a brief time, we were invited to the kitchen table and served generous portions of typical Nepali cuisine featuring rice, lentils, peas and greens. 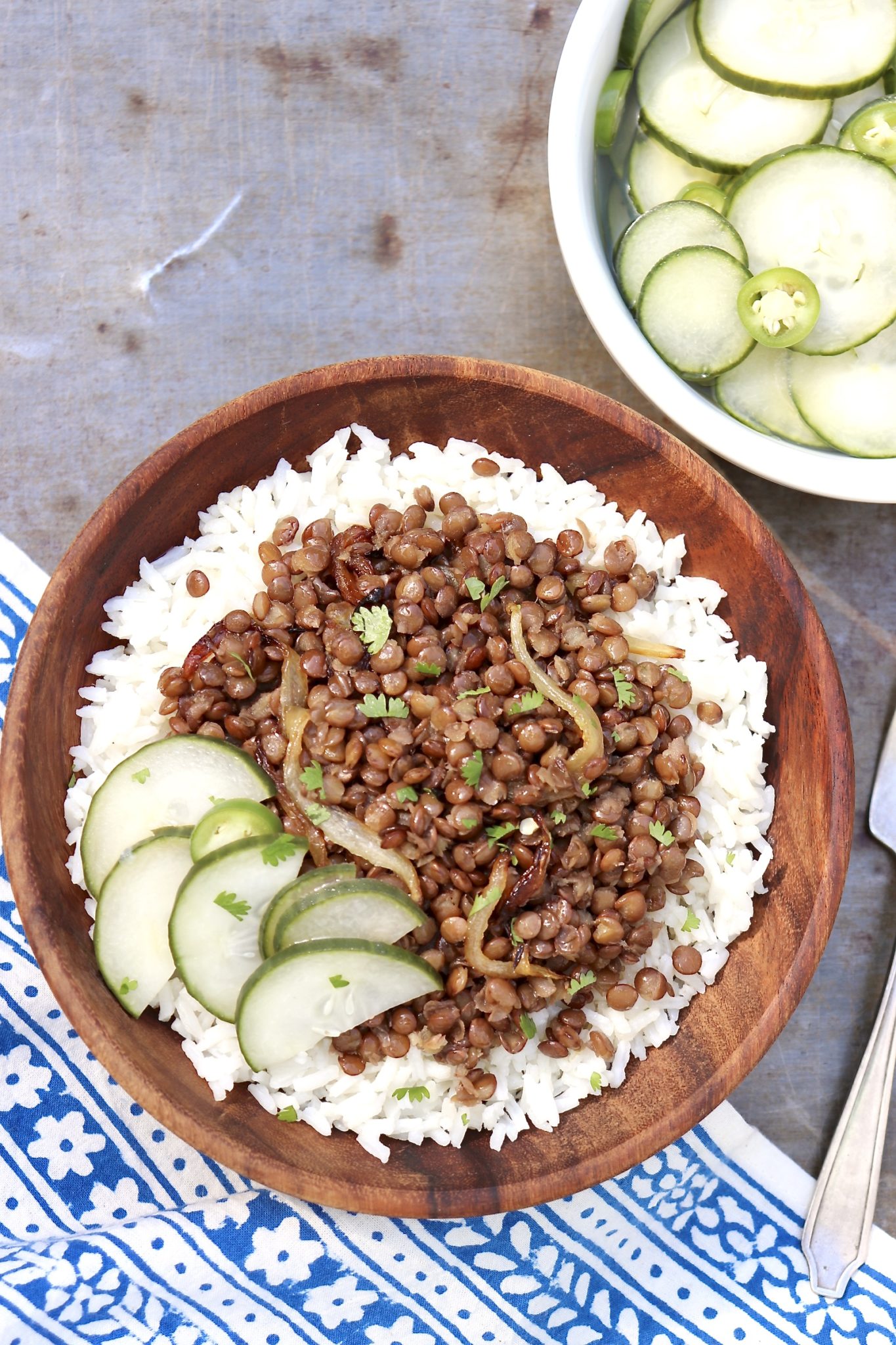 We were instructed to mix in a variety of sauces, homemade yogurt and pickled vegetables (mustardy pickled radishes were a crowd favorite), which provided layers of flavor and texture.

Our large, round plates had compartments, not unlike a bento box. In the center of the plate was a bowl heaped full of rice pudding. It was sweet, creamy and lightly spiced with cardamom. The grain of the rice was tiny, delicate and altogether different that any rice any of us had previously eaten.

Tika later told us that the Kalijiri rice, which is basically a tiny basmati, is a ”special” rice they also feed their backyard birds because the birds seemed to choke on regular rice. No doubt, the family appreciates and spoils the wildlife that wonders into their neat backyard.

As we ate our meals, Tika returned often to fill our plates. When I noticed her eating her own dinner at a separate, small table, I encouraged her to pull up a chair and join us. She squeezed in amidst our group of six－and that was when we heard the most compelling details of her family’s journey.

It was a sobering story of religious persecution, being hidden as a small child, fires, and a constant threat of the atrocities of rape, murder and imprisonment.

When Tika arrived in Lancaster with her grandmother, parents and siblings, she enrolled in J.P. McCaskey High School, learned English, graduated and secured a full-time job. Her siblings followed similar paths, and after four moves over several years, they were able to trade their monthly rent payment for a mortgage of a similar amount.

Tika’s family is living out the American dream, so to speak. They escaped persecution, overcame adversity and persevered. Now they are productive members of our community, working hard and giving back.  And as they try to make a better life for themselves, they are simultaneously enriching the fabric of our city.

As we departed at the end of the evening, everyone exchanged hugs. We made plans to cook rice pudding together. (Which we later did! ⇩⇩) 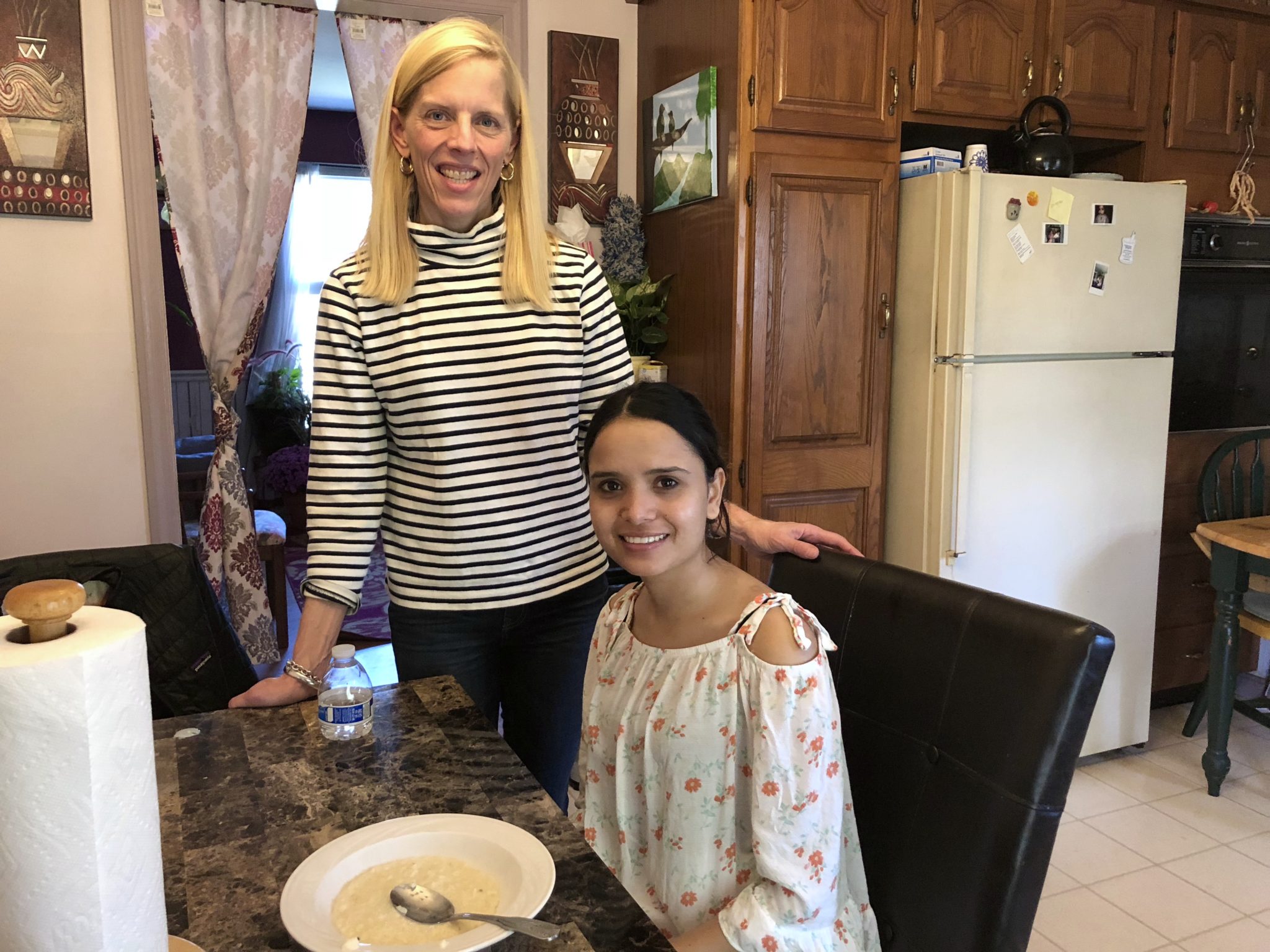 I’m standing next to Tika in the photo above. Below, Tika is with Mika, who returned to cook rice pudding with us. 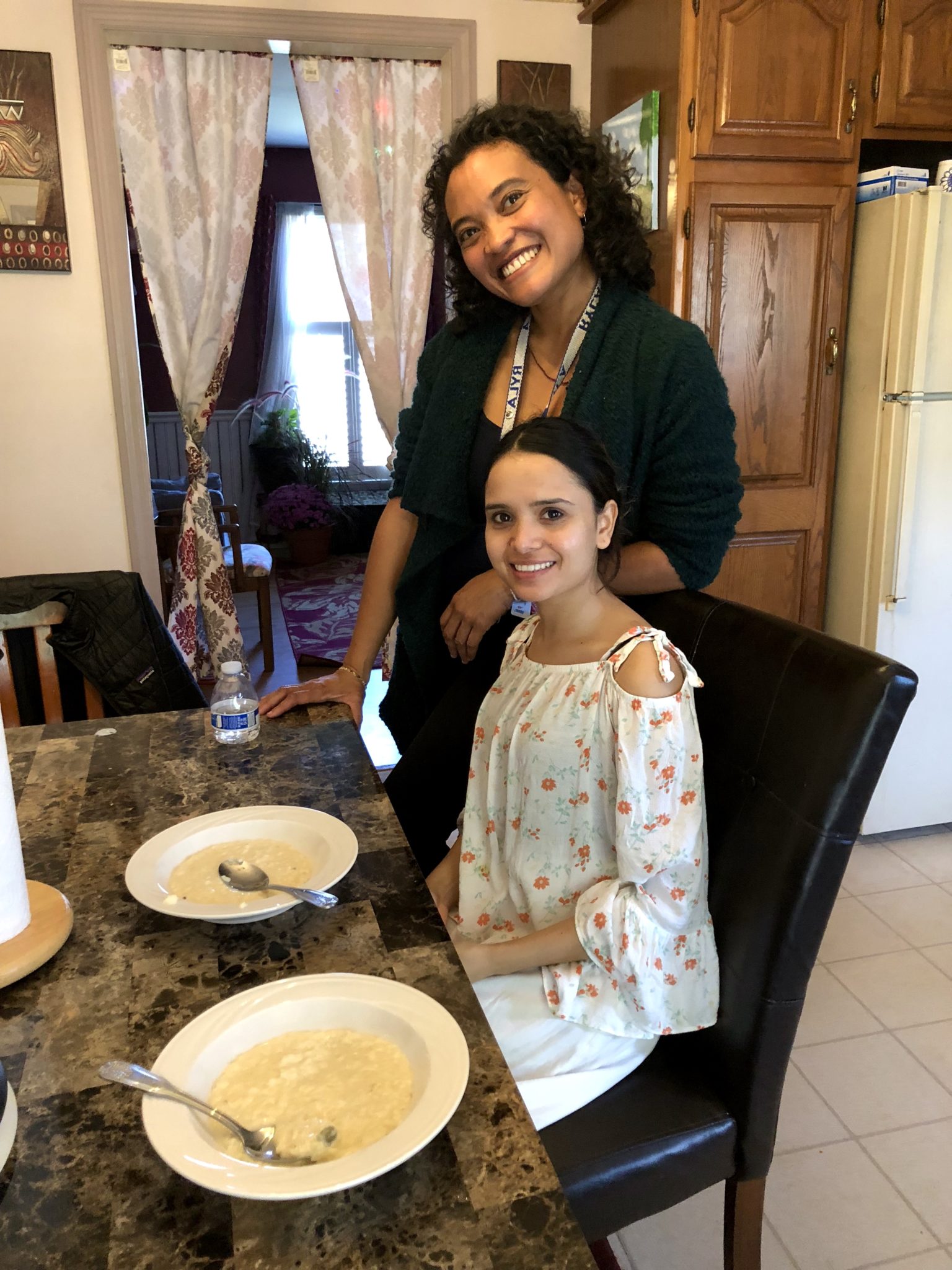 I wanted to share a piece of our experience, and but I wanted it to be a recipe that was easy to replicate with accessible ingredients. I contacted Sri Dasgupta, an immigrant from India, who has been instrumental in the meaningful hiring of refugees in our community and is involved in the refugee dinners as well. (More details on her restaurant, Upohar, below the recipes.)

The following recipe covers both of those bases, plus it’s healthy, filling and so full of flavor. As you will see, there are spice two options. One is traditionally Indian, the other is typical of the Nepali preparation (and slightly harder to find).

I favor the easy Indian variation, which utilizes cumin seeds over the more often used powder. Despite the utter simplicity, I think you will be amazed by the flavor. 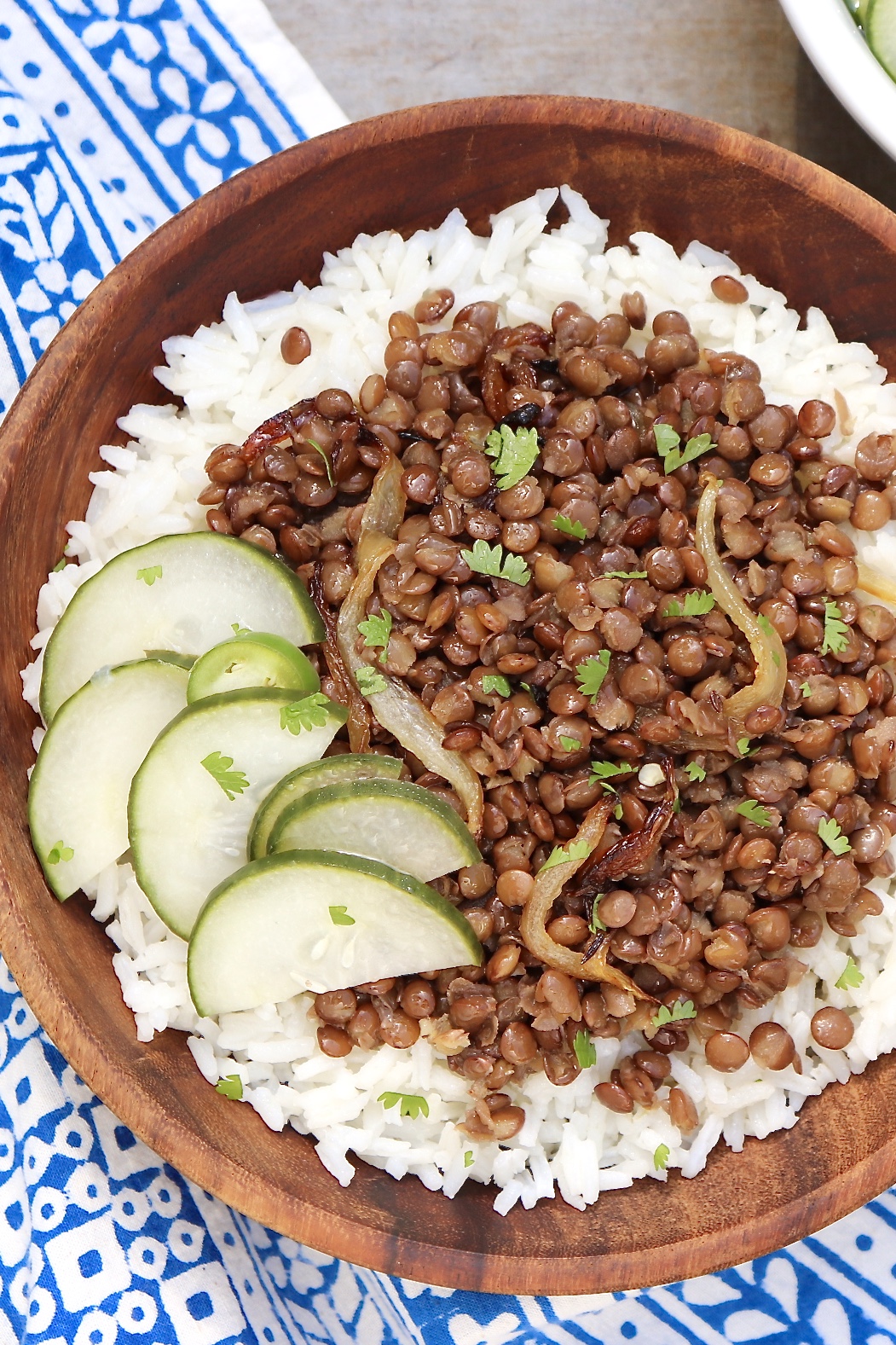 Lightly aromatic Basmati rice is delightful alongside the lentils, but you could use your favorite white or brown variety – or cauliflower rice for a low-carb option. The rice soaks up the rich-tasting broth, although I could forego the rice and eat these lentils like soup.

The first time we sat down to this dinner as a family, my younger son Christian said, “Oh lentils, my favorite!” (Note that these words were uttered with a hint of sarcasm.) He was pleasantly surprised, however, and devoured two servings!

It’s traditional to serve the dal with pickled vegetables, so I prepared a super speedy pickled cucumber that added a hint of crisp tang and lightness to the dish. I recommend doing the same, but in a pinch, some chopped tomato grapes and or cucumber tossed with a squeeze of lemon juice may offer something similar. 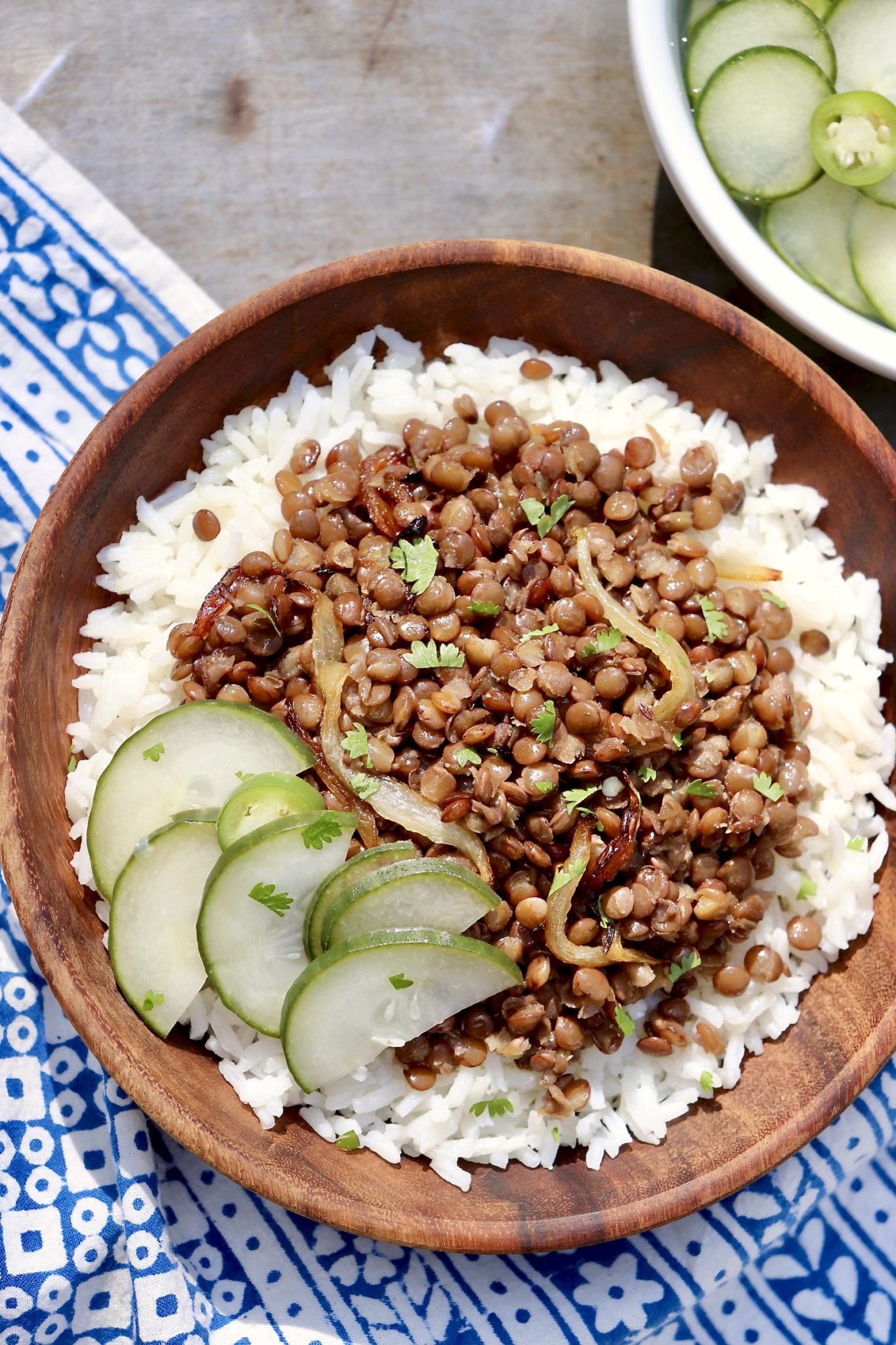 The flavor of this vegan dish (which satisfies the meat eaters in the crowd, too) improves over time, making leftovers welcome.

*Cumin seeds as opposed to cumin powder bring special flavor to this dish. As an option, Bada masala is a Nepali 5-spice mixture that can be purchased at South Asian or Indian grocery stores (like Everest International Grocery Store on Columbia Avenue for locals). It can also be made with equal parts cumin seeds, coriander seeds, fenugreek seeds, nigella and fennel seeds. The use of Bada masala is typical in the Nepali preparation of this dish, while the use of cumin seeds is commonly used in India.

**I like a long grain, white Basmati rice, as it is lightly aromatic and complements the dal nicely, but your favorite brown or white rice may be used.

Tip: If the dal (lentils) becomes too thick, thin with additional water. They are meant to be a soupy consistency and then served over rice. 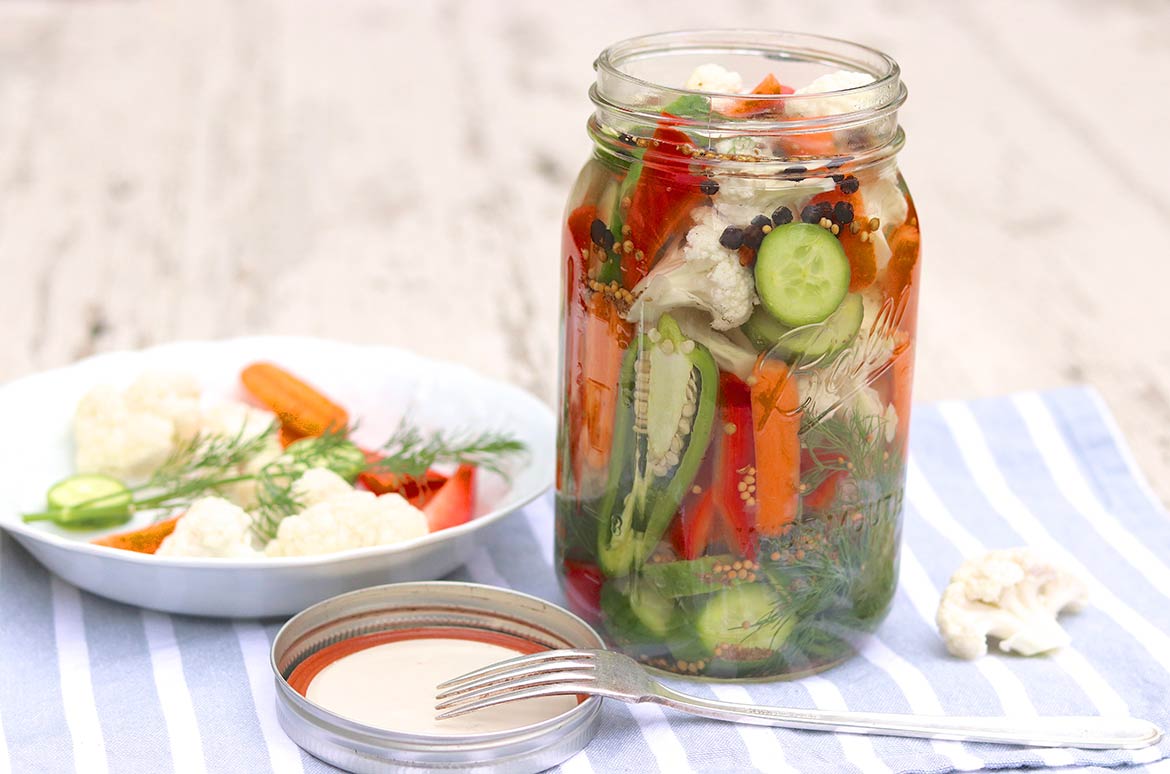 Quick Pickled Cucumbers
Yield: 2 cups
These easy pickles are traditionally added to the lentil dish above to add bright flavor and a hint of crunch. I quarter the rounds and mix them in to incorporate more flavorful pieces throughout.
Print
Ingredients
Instructions
The Fountain Avenue Kitchen https://fountainavenuekitchen.com/

Add-on dishes may include:

For information regarding the refugee dinners:

Bridge offers dining experiences hosted by and in the homes of local refugee families with the hope of connecting with their neighbors. Diners can choose from a variety of authentic cuisines, like Somali, Nepali, Iraqi, Congolese and Syrian.

Upohar Ethnic Cuisines — Upohar, meaning “gift” in Bengali, was established in 2011 as a social impact catering business in Lancaster, Pa., with a mission to offer the gift of distinctive global cuisine to customers, and the gift of employment opportunity to newly arrived refugees in the city. Upohar hosts larger, monthly refugee dinners.

Along with its catering arm and Lancaster Central Market stand (Christina’s Criollo), Upohar employs, trains and pays living wages to people experiencing significant barriers to workforce entry (such as newly resettled refugees or people experiencing homelessness), and puts them on a path to economic self-sufficiency. They partner with local agencies to provide human services to their employees to help them be stable and secure in their personal lives.