What Should We Know About Food Labeling? 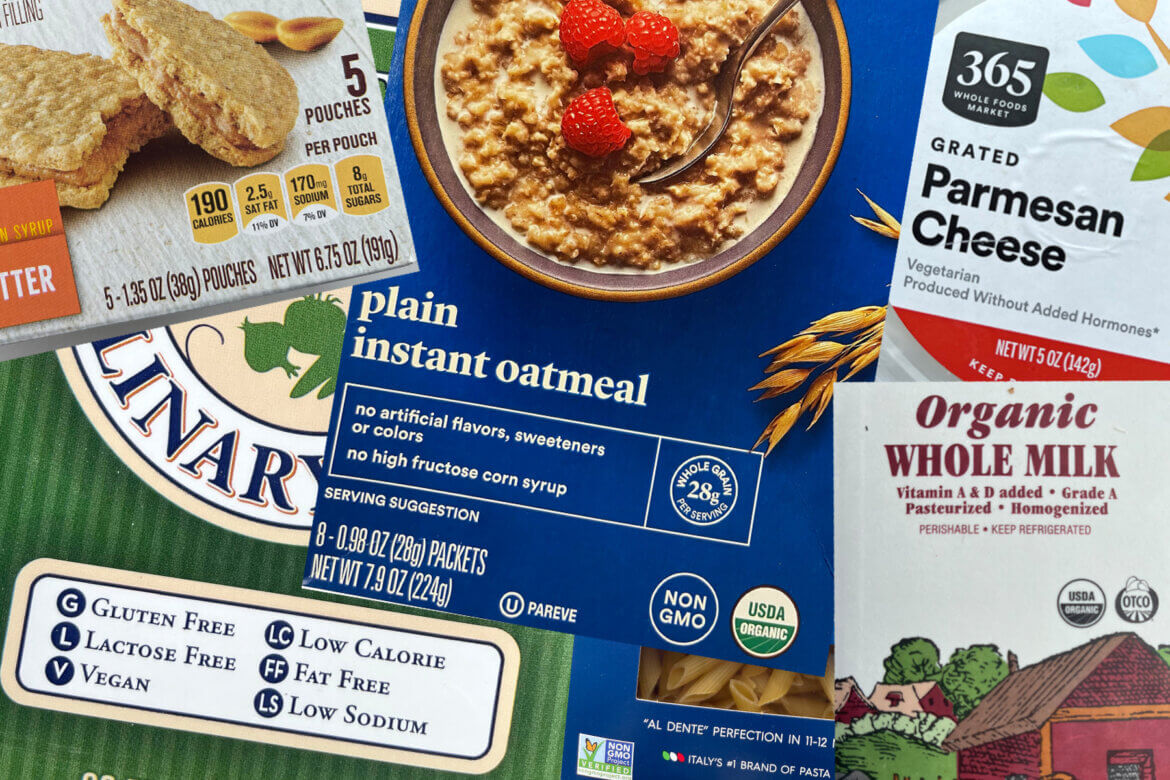 What’s the significance behind those nutrition claims we see on the front of our food packages? Let’s find out. Because the more we know about them, the easier it is to discern which claims are most meaningful …

Last week a friend told me he had a POP-TART® for breakfast. He quickly followed it up with, “ but it was the all-natural kind.”

We looked at each other and burst into laughter, picturing him standing in the store comparing which brand of POP-TART® was healthiest. Were the raspberries in the filling hand picked? And were the marshmallows in the S’mores flavor organic?

We laughed together, recognizing how his behavior played directly into the hands of food marketers who capitalize on our fascination with making healthy choices.

MARKETING vs MISINFORMATION
Food companies know that when presented with food choice, we will often buy the most wholesome option for our families and ourselves. This is why they advertise nutrition claims on the front of packages.

But this desire to turn a profit can blur the lines between marketing strategies and misinformation.

SO, HOW TO STAY AHEAD OF IT?
I’m by no means immune to the power of advertising and am often tempted by new granola bar offerings on the market (anyone else get excited by that?).

But the more we know about labeling, the easier it is to discern which claims are most the meaningful—and we can decide what we want and what we need, without being too easily swayed by clever marketing campaigns.

THE BASICS
The U.S. Food & Drug Association (FDA) is the governing body that determines how food companies can advertise on the outside of their packaging. Regulations are in place so that the general public is not inundated with false information.

Nutrient Content Claims
This includes terms such as fat-free, or reduced, or low in sodium. Specific guidelines outline how much of a nutrient (like sodium or fat) is allowed in a food per serving to be able to use that language. For example, a box of cereal could have “low sodium” printed on its package if the cereal contained <140mg sodium/serving.

Remember, the labels only apply to one serving size, so if eating more than 3/4 cup of cereal, for example, it would no longer be a low sodium food.

This information can be helpful for people who have specific medical conditions – such as heart failure or kidney disease – because in these cases dietary intake of certain macro and micronutrients have to be closely monitored. But in those cases, it is by no means a substitute for careful reading of the back label (see below).

Health & Function Claims
These claims describe an established relationship between a nutritional substance and a disease state, or the role of the nutrient in normal functions of the body.

For example, the front of a yogurt container may read: “adequate calcium intake throughout life may reduce the risk of osteoporosis,” or “calcium builds strong bones.” But all yogurts fit these claims, so I wouldn’t let it impact brand selection.

USDA ORGANIC
The U.S. Department of Agriculture (USDA) is the governing body that regulates organic labeling, and can be used as long as the food item has been produced with 95% of its product meeting USDA organic standards. It must also be Non-GMO.

Per the USDA website, to be certified organic, production practices need to use “resource cycling, promote ecological balance, maintain and improve soil and water quality, minimize the use of synthetic materials, and conserve biodiversity.”

Does Organic Matter?
Depending on location, willingness to spend, and availability, organic is a great option. But, it’s not the only smart choice. So, if the local market sells only conventional (non-organic) apples, should we buy them?

I say yes. Research shows that eating fruits and vegetables has health benefits regardless of whether it is organic. Based on that, in my opinion, eating a conventional apple is a better choice than not eating one at all. Not all pesticides can simply be washed off, but rinsing under water will remove some.

NON-GENETICALLY MODIFIED ORGANISMS (NON-GMO)
GMOs or “bioengineered” food are plants and animals that have had their DNA technologically altered. The FDA, USDA, and the Environmental Protection Agency (EPA) monitor this process for safety.

GMO has similar nutritional profiles to non-GMO foods (also called Genetically Engineered Free) and have been determined safe to eat. However, because GMO is a relatively new process, it is difficult for anyone to say for sure that there are no long-term health effects that we don’t know about yet. (Though as we know, this could be said about many things.)

The U.S. does not currently require that all GMO foods label their products as such (for example some GMO sugars are exempt). However, some independent non-profits are putting their own seals of approval on non-GMO products in an effort to be more transparent to consumers.

ALL NATURAL
There is no formal definition for the use of the word “natural” on packages. Though on their website, the FDA considers the term natural to mean that nothing artificial or synthetic has been added to the food that wouldn’t normally be there.

It’s possible for a bag of cookies to be “all natural,” it’s just unclear how impactful that distinction truly is for consumers trying to make an informed, healthful choice.

NO NITRATES
This label indicates that natural agents (such as celery powder) were used to cure the meat instead of synthetic sodium nitrite. This can be misleading because once digested, the body does not distinguish between nitrates from natural or other sources. They pose the same health risks.

NO HORMONES ADDED
For beef, dairy, and pork, consumers can choose products that have no hormones added. Though the FDA claims there is no difference in the quality of the meat, many consumers may want to know this information.

Other terms often seen on animal products include “Cage Free” (raised without cages – might not need to mention as it’s sort of obvious; the bigger issue here is that the chickens are still often raised in over-crowded conditions) “Pasture Raised” (the animals get at least some time outdoors), and “Grass-Fed” (fed grass instead of grains 100% of the time).

THE BACK LABEL
There is no substitute for this guy.

For those with certain medical conditions, it is vital to examine the nutrition label on the back of the package rather than inferring nutrition information from the front of the package. Of special note:

Remember that this information pertains to PER SERVING. So the serving size on the label must be compared to actual intake, otherwise calculations won’t be accurate.

Though seemingly helpful, labels can be deceiving. And even if something is deemed as natural or organic, that doesn’t necessarily mean that it’s healthier.

I welcome all questions, and you may like to stay up to date with FDA and USDA labeling guidelines by checking out their websites: