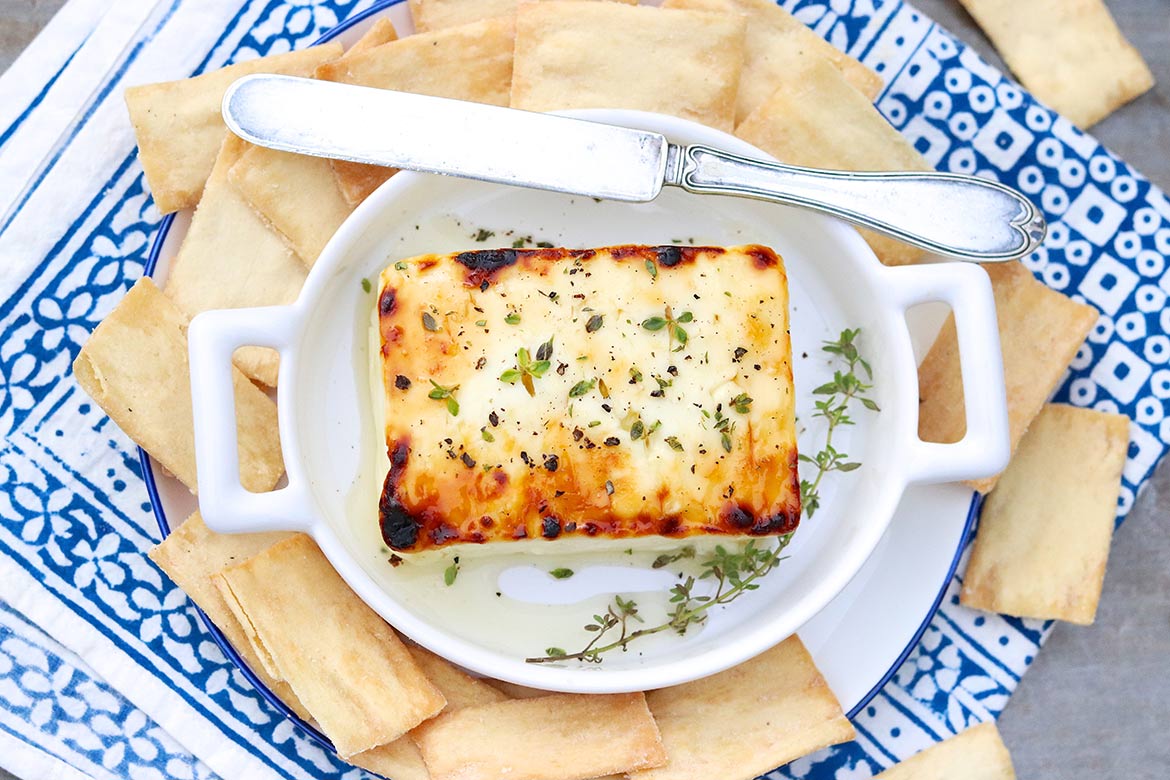 A dear friend called this delicious appetizer easy but “showy,” and it’s a perfect description!

As the New Year approaches, it’s natural to ponder our hopes and dreams and to consider the multitude of resolutions we could make (and possibly break) in the months ahead. It’s also a good time to look back on the people and places that made a difference in our lives and how that came to be.

I’ve long marveled at how food brings people together. This often happens in a literal way as we eat our daily meals alongside family and friends. However, food can also forge bonds in countless smaller but equally meaningful ways.

Over the years, one of my go-to hors d’oeuvres has been a crusty-on-the-outside, gooey-on-the-inside baked Havarti. The concept is similar to baked Brie in puff pastry, but even easier.

For many years now, thoughts of Sally Jarvis have filled my head whenever I prepare this party favorite. For most of my life, I knew Sally for the many contributions she made to our community. She was a student mentor, a church elder, a children’s book author, a freelance writer for this newspaper, a tireless community volunteer, a champion of the arts, and a driving force behind three downtown murals. Sally was smart, funny, and spirited. Able to relate to all generations, she taught life lessons and crafted enduring bonds with her many grandchildren, often over tea and cookies. 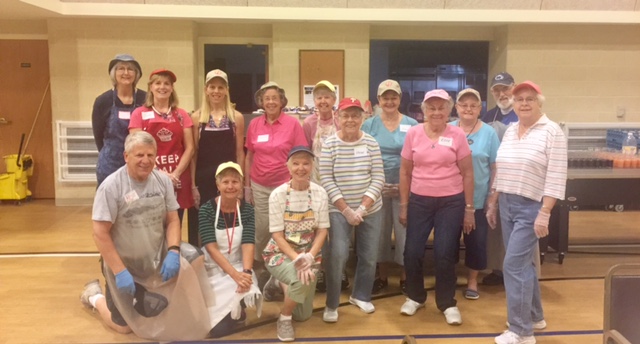 I’m third from left in the back row, and Sally is beside me to the right. We’re with the Wednesday morning volunteers at the Anchorage breakfast program.

Through marriage, Sally and I became distantly related, but it was this singular recipe for baked cheese that forged a friendship. Years ago, Sally made a point of telling me how much she adored this recipe. With a signature twinkle in her eye, Sally described the appetizer as “showy,” proclaiming that its impressive appearance and taste deftly masked its utter ease.

Sally reported back whenever she made the recipe, eternally grateful for a swoon-worthy appetizer that she could practically pull off in her sleep. Baked cheese, of all things, opened a door to deeper conversations, and this was quintessential Sally—she always found common ground, no matter how mundane, from which she could build relationships and make people feel special.

Earlier this year, Sally passed away unexpectedly, having lived her 89 years to the fullest. Soon after, I came across an old recipe for baked feta and served it with Sally in mind.

The preparation for this dish is ridiculously easy, yet it consistently garners accolades that suggest serious effort. Feta’s signature saltiness is enhanced by a hint of lightly caramelized honey. Once baked, its creaminess pairs perfectly with crackers or crusty bread. It’s the type of recipe that can be prepared at a moment’s notice and allows you to focus on your guests instead of the cooking—just like Sally would do.

So as we celebrate the final days of this year and anticipate the next, I wish you much joy and happiness. And don’t forget to take a little time to reflect on the people that have made our lives a little brighter. 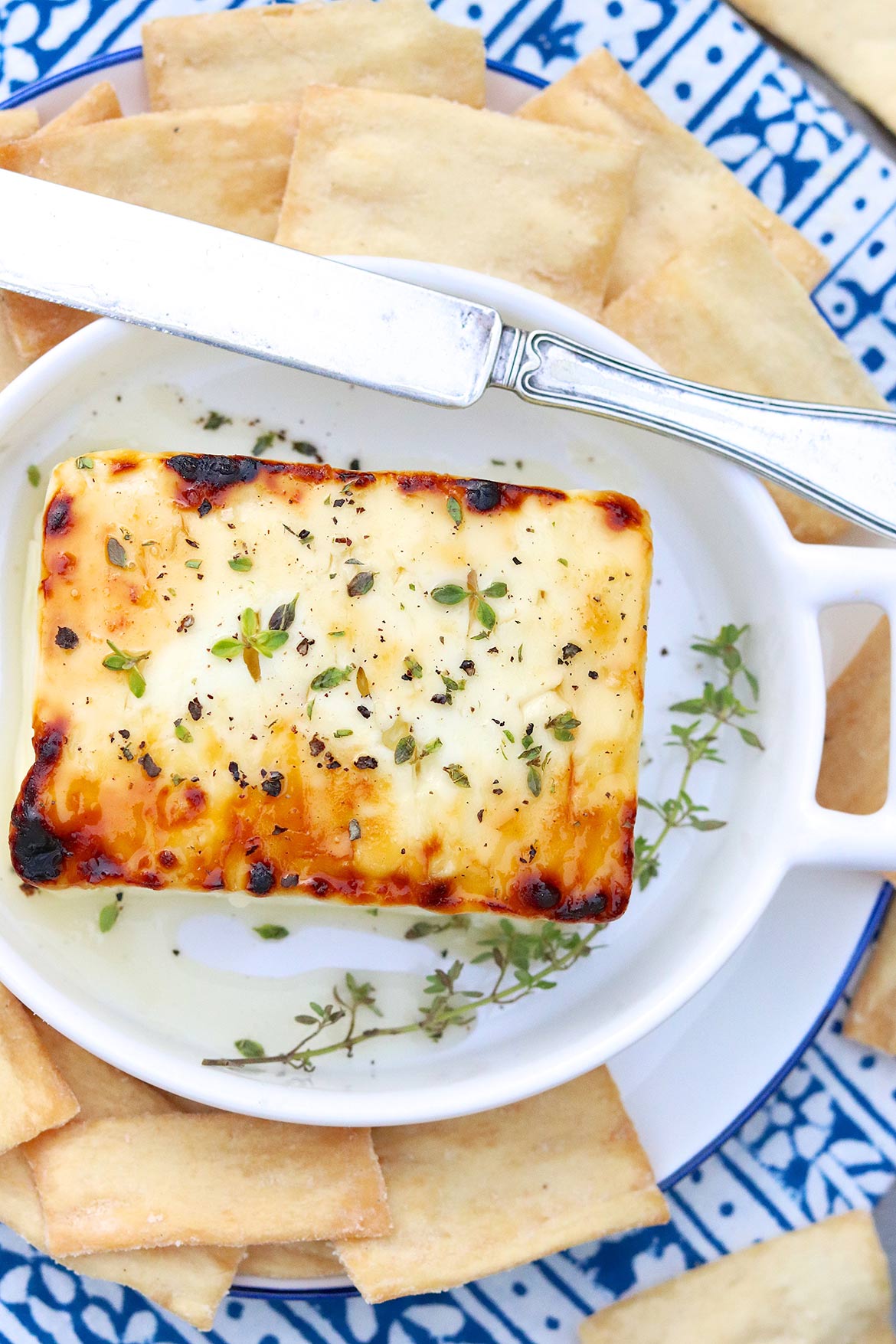 Roasted Feta with Honey
Yield: 6-8 servings
A bowl of cashews or almonds is an easy complement to this practically effortless appetizer. For full flavor, spoon a bit of honey that has pooled along the sides over the feta after it comes out of the oven. Any leftovers can be reheated and enjoyed as is, or spread over toast with an extra drizzle of honey.
Print
Ingredients
Directions

Preheat the oven to 400 degrees F. Line a small oven-to-table earthenware dish or a small ovenproof sauté pan with aluminum foil. (This will make it easy to drain excess moisture and transfer the cheese later.) Place the feta in the dish and coat with the olive oil. Bake until the cheese is soft and springy to the touch but not melted, about 8 minutes.

Remove the feta from the oven and preheat the broiler. (Tip: Some varieties of feta will release a good bit of liquid when baked. If there’s a pool of it, carefully pour it off to avoid watering down the end result. I find it easiest to lift by the foil, which cools quickly, and let the liquid spill out in the sink.)

Spread the honey over the top and sides of the feta, and then broil until the top of the cheese browns and just starts to bubble. (Watch carefully so you don’t burn the feta. In my oven, this takes about 2 minutes on the top rack—or a little more than 3 minutes when I forget to switch to the broil setting when I remove the dish from the oven after baking. Also, turning the dish several times while broiling will help evenly brown the surface.)

Remove from the oven and spoon some of the honey that has run off the sides over the top of the feta. Season with black pepper and minced thyme. Use a metal spatula to transfer the feta to a serving dish (or simply remove the messy foil and use the baking dish for serving) and serve immediately with crackers or bread of choice.

I adapted this recipe from Sara Dickerman’s original, which calls for thyme-infused honey and double the olive oil. Since people are far more likely to have regular honey on hand, I use that, and sprinkle with a pinch of fresh thyme before serving. I also find that 1 tablespoon of oil is sufficient to coat the block of cheese.