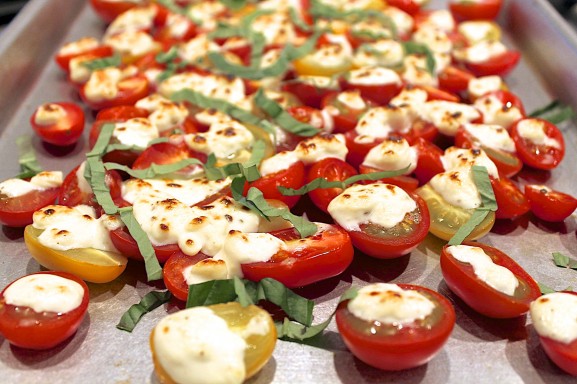 My sister is an artist. At a very young age, she stunned everyone with an amazingly accurate sketch of a horse. Eventually, she became a painting major at Rhode Island School of Design. I always joked that she got all the artistic abilities and I got none!

As I grew older, I realized that my creative outlet was in the kitchen.  I love to experiment and try new things, often based on flavors I think would pair well together or some random combination of ingredients that I think would taste good. Because I like to make a new recipe several ways before I share it on this site, there are many that don’t make it–at least right away. Seasonal ingredients change and I get onto new things.  So, before tomato season comes and goes–and since we can get rather tasty grape and cherry tomatoes year round–I thought I would share a recent experiment.

I initially set out to create a salsa of sorts for steak. When served to my extended family, everyone liked it all by itself.  So, if you try my recent experiment, let me know what you think or if you tweak the recipe or use it in some other way.  It’s fun to learn from each other as we try new things in the kitchen!

Roasted Tomatoes with Whipped Feta
While I first crafted this easy recipe as a seasonal topping for grilled steaks, my family enjoys it as a side all by itself. It is also quite good stirred into cooked couscous, rice, or quinoa. Simply drizzle with olive oil and a splash of balsamic vinegar, add additional fresh basil, and season to taste.
Print
Ingredients
Instructions
More On YouTube More on Instagram
Tried this recipe?Post a picture on instagram and we will repost it! Mention @fountainavenuekitchen or tag #fountainavenuekitchen!
The Fountain Avenue Kitchen https://fountainavenuekitchen.com/ 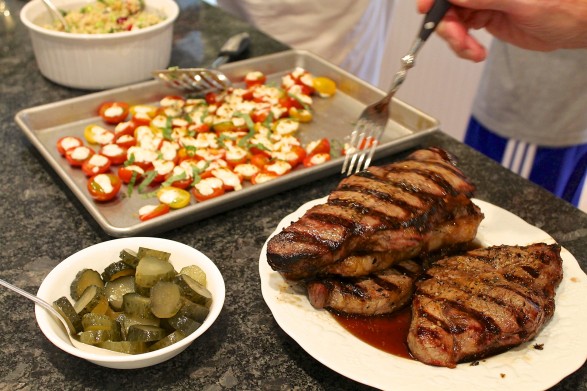