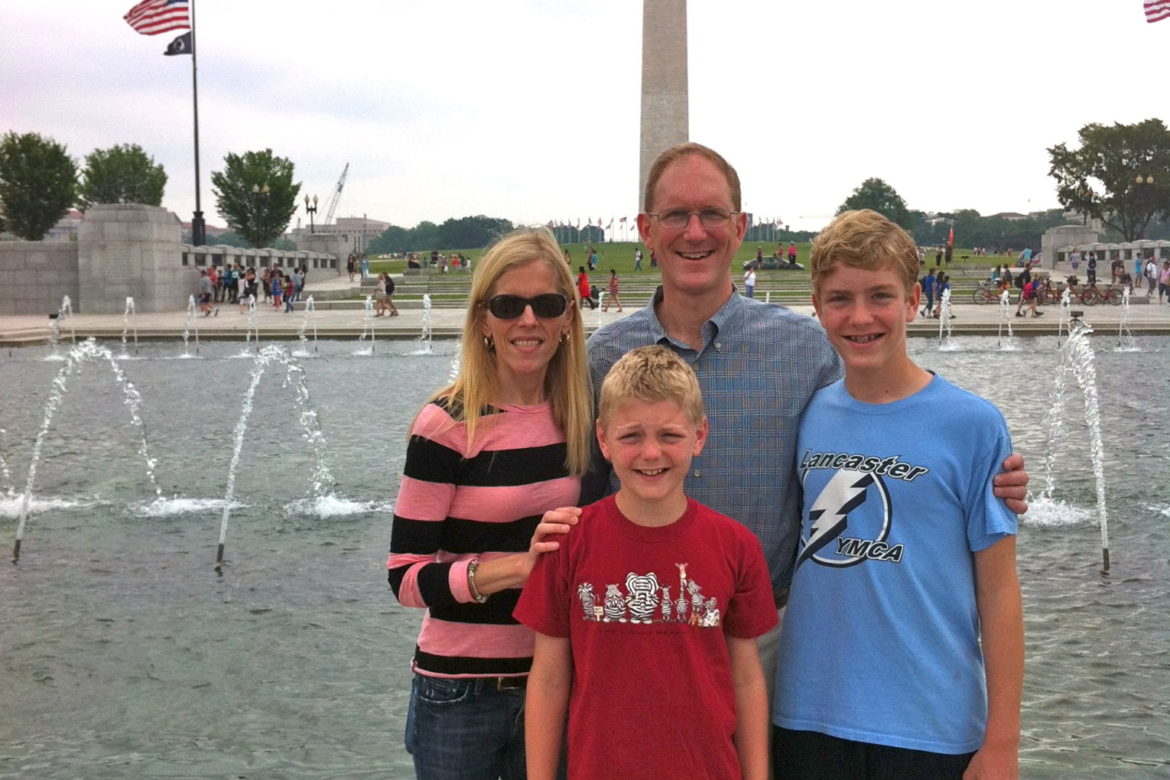 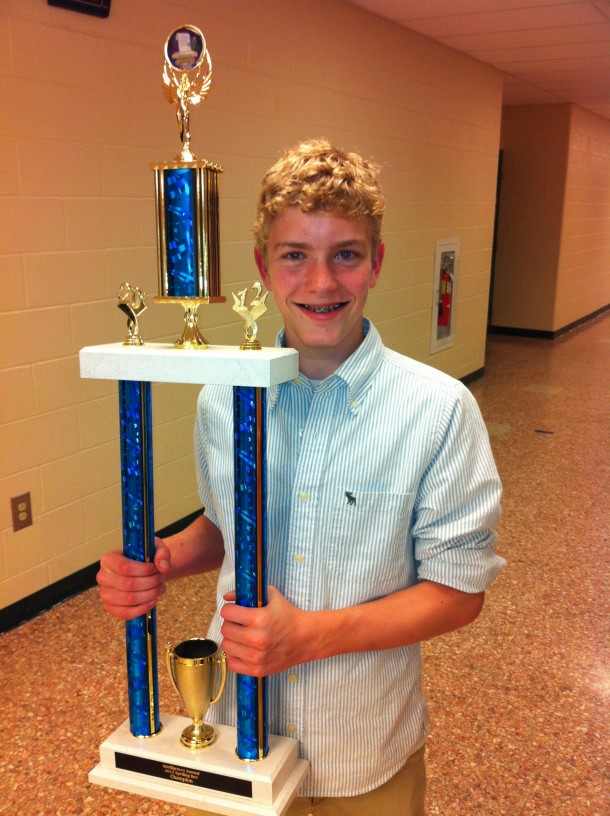 This is the photo I took when my son, John, won the spelling bee which got us to where we are right now–The Scripps National Spelling Bee in Washington, DC.  (Okay, we are technically in National Harbor, Maryland!)  That was in March.  We are now starting a full week here, sponsored by the Intelligencer Journal/Lancaster New Era.

Many people have asked me to provide updates from the spelling bee and several have asked for a “behind-the-scenes” scoop.  While I don’t usually use this space as a forum to discuss my kids–beyond how they react to my food!–this seemed like a pretty cool thing to tell you about.  Never fear, for those who just want recipes, I hope to catch up on my recipes posts while I am waiting for John during some of his sessions.  After a week of computer problems, the end of the school year, a holiday weekend, and getting ready to leave town for a week, there was cooking–but not much typing!

So to the good stuff…

We pulled up to the Gaylord National in National Harbor to find a truly breathtaking spot.  Our room overlooks the Potomac River and the hotel is nothing short of fabulous.  Here’s a view from the water: 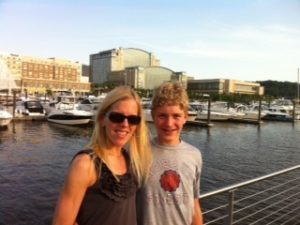 First up was an information session which provided all the details for the first few days. After the meeting and a great dinner overlooking the harbor, we happened upon an Adam Lambert concert right outside our hotel.  For a 13-year-old boy, things were starting off on a rather high note! 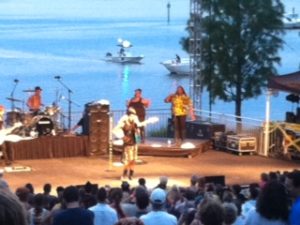 Today was the first full day and we were taken to a beautiful spot in Virginia for a huge Memorial Day cookout.  The kids all received books with all the spellers’ pictures and fun facts about each person.  There is also a question pertaining to each speller, and the kids are supposed to get as many questions answered–plus an autograph–during the week.  Even the head of the spelling bee, the judges, and the announcer are included. This has proved to be a hit with all the kids and has been a great way for them to meet each other and interact.

Here is the book…and my favorite speller! 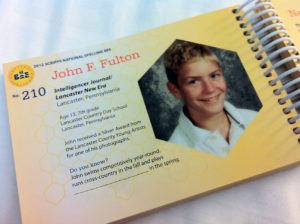 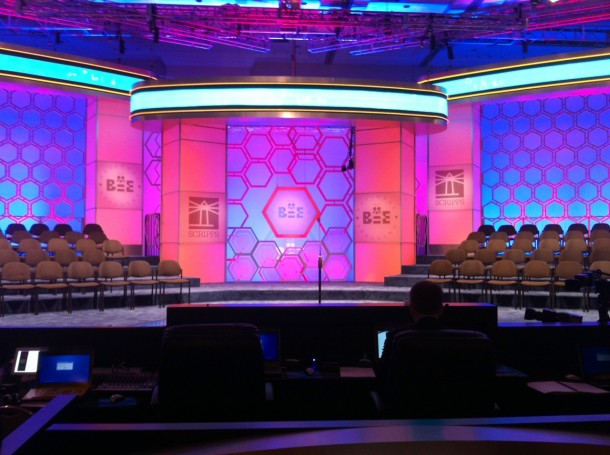 The written exam took place this morning.  The spellers had a designated time to report to a room where they heard 50 words through earphones and had to type the correct spelling onto a computer.  Only 25 of the words count;  they just didn’t know which 25.  The spellers had to sign a confidentiality agreement, saying they would not discuss the exam until after 2:00, when all spellers would have completed the test.  By 2:00, the only thing that John could really remember was that the easiest word was “individuality” and that he thought he did pretty well.  He did say that most of the words were pretty difficult, and some he had studied in his books.

Rounds two and three will take place tomorrow.  In each round, the spellers will be asked to spell one word.  Each word is worth three points.  These points will be combined with the scores from the written exam (one point for each of the 25 words that “counted” in that test, for a grand total of 31 possible points.)  The top scorers will go on to the semi-finals on Thursday, and this will include up to but not more than 50 spellers.  There are a total of 278 spellers.  Last year, the score to advance was a 29, which means the kids had to spell both words in rounds 2 and 3 correctly and not miss more than two of the 25 words that counted in the written exam.

Tonight, we had a meeting in the room pictured above where the rounds will occur from here on out.  The meeting reviewed all sorts of interesting history as well as the rules and details for the events going forward.  The room is all set up for ESPN coverage.  Tomorrow’s rounds will be live on ESPN 3, and the coverage works its way up to the main ESPN channel on Thursday night.

We did fit in some site-seeing today and a visit to my alma mater, American University.  Above all, the first few days here have been a lot of fun and a really wonderful experience.  For now, I will leave you with some interesting facts about the bee… 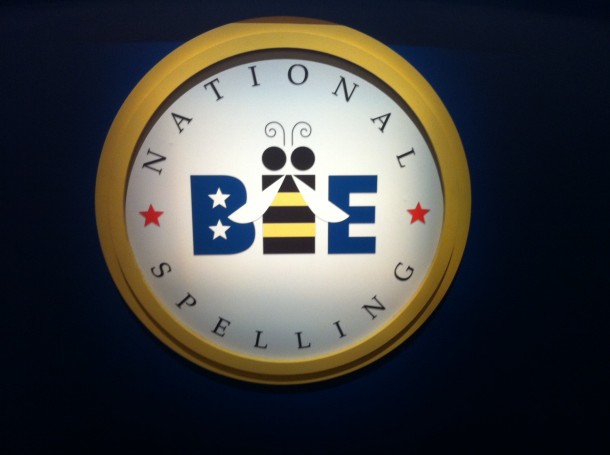 Today was an exciting and nerve-wracking day and, ultimately, the day that John got eliminated from the spelling bee.  He missed two words in the preliminary round that prevented him from reaching the score he needed to continue to the semi-final round.  The first word was “gnathonic.”  The silent “g” got him.  The second word was “isepiptesis.”  We knew when the pronouncer stumbled on the word and then offered three alternate pronunciations–all of which we barely understood!–that he was probably finished.  The upside is that the pressure is off.  While I assured him that he won just by getting this far, there was no getting around the fact that this was incredibly stressful for the kids.  I was truly amazed by ALL the kids…such an extraordinary group of young adults who were not only smart but friendly and quite interesting.

Many have read about the six-year-old who made it to the national bee.  She was quite impressive herself but did not move on after today either.  So many of the kids were fun to watch and, as a parent, I wanted them ALL to succeed!

Tomorrow, we plan to do a little site-seeing and return for the finals which will air on ESPN at 8:00 Eastern time.  I think John will sleep well tonight! 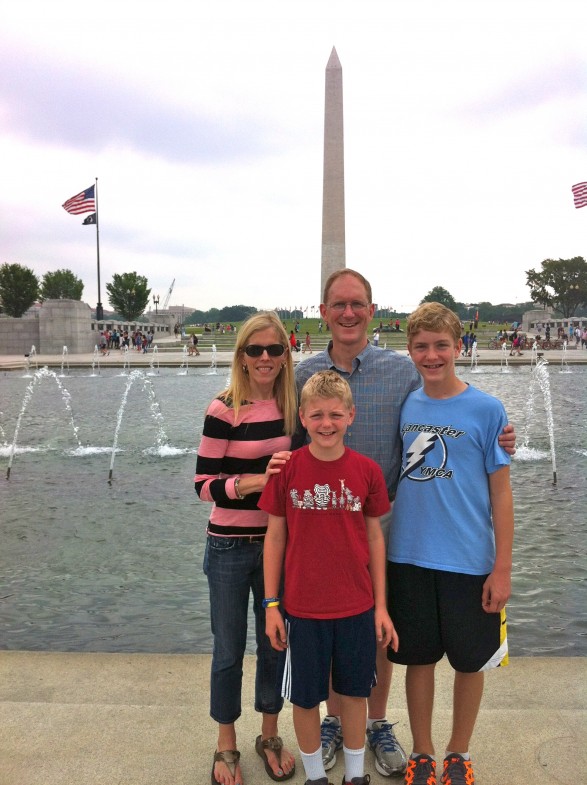 The days since John exited the spelling bee have been quite full.  Between watching the finals and participating in some organized events and site-seeing, there has barely been a spare moment!  The spelling bee finals on Thursday night were nothing short of thrilling.  Yes, a spelling bee was riveting!  The winner, Snigdha Nandipati from San Diego won with the word “guetapens, ” which, I will note, is not pronounced phonetically so is even harder to spell than it might appear.  All the words in the finals were ridiculously difficult.  I might have been able to spell two of them!  Snigdha was such a nice, well-spoken young lady–not to mention a hard worker.  I was thrilled to see her win.

Yesterday, we went on a tour of the city, visiting all of the monuments and the Smithsonian.  In the evening, there was an awards dinner and a farewell party.  John made many friends during this eventful week and I was ultimately so pleased that, amidst the stress of the actual competition, his most frequent comments centered around how much fun he was having.  The kids all loved that the pronouncer, Dr. Bailley, was out on the floor, dancing with them at the final party.  He, along with all of the Scripps employees, was the nicest person and did everything possible to make the experience positive and memorable for all the kids and their families.

We are getting together with family tonight to watch the ESPN aired broadcast which my mom taped.  Watching it in person, we could not see all of the side stories on the kids.  Knowing many of them, it will be extra fun to see them on TV.  Amazing as the week was, it will also be nice to have a home-cooked meal and sleep in my own bed!

Thanks to all of you who offered support, cheers, and encouragement to John.  It was a week we will never forget!

If anyone is interested in a few more details about the winner, click HERE for an article and video clip.