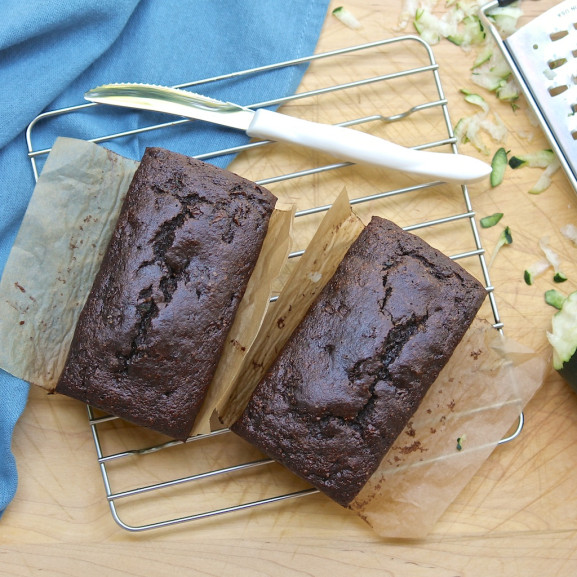 A healthy zucchini bread that naturally conforms to gluten-free and Paleo diets and never disappoints!

If I told you that I have a recipe for a baked good that omits dairy, gluten, and refined sugar, words like cardboard and yuck might come to mind.  Yet this mildly sweet, tender zucchini bread really tastes great.

While I don’t advocate or personally subscribe to any specific diet plans, my recipes sometimes fit the parameters–or can be easily adapted–to suit a variety of dietary needs and preferences. The following wholesome version of a classic quick bread could be labeled as “Paleo.”

For those who may not be familiar, the idea behind a Paleolithic diet is to eat like people ate a long time ago…a very long time ago.  That is to say, if a caveman couldn’t eat it, neither would one who follows a Paleo diet.  This translates to a menu of meats, fish, nuts, veggies, and seeds—basically anything that could be hunted or gathered. Foods like pasta, breakfast cereal, and candy are considered off limits.

The Paleo or caveman diet became popular in the late 2000s, and I recently read that it was Google’s most searched-for weight loss method in 2013.  Advocates argue that modern agriculture and the domestication of animals have created a decline in the quality of our food. They also believe that humans have not evolved to properly digest “new” foods such as grain, legumes, and dairy, much less the processed foods that are so widely available.

Opponents of this eating plan claim that any diet that restricts certain food groups isn’t balanced, and there isn’t strong science to prove that Paleo-eaters live longer or are healthier than those who don’t follow the diet.  What’s more, whole grains and legumes, while forbidden on a Paleo regimen, are vitamin and fiber-rich and can play an important role in a healthy, well-rounded diet.

My mom always advocated an “everything in moderation” approach.  Though I’m not a nutritionist, dietician, or doctor, I think this makes a lot of sense.  As much as possible, I focus on the colorful produce, whole grains, and lean proteins of my mom’s grounded approach that champions exercise while allowing for dessert.  In a world where we are bombarded with information on what is good for us and what is bad for us–and these things seems to be ever changing–I think this may be the wisest eating plan yet!

So I offer this zucchini bread recipe, not because it aligns with a modern Paleo diet, but because my family thinks it tastes great. I like the ingredient list where protein-rich almond flour stands in for white flour and a reasonable amount of honey or maple syrup replaces refined sugar. The easy recipe is also a perfect way to chip away at the season’s ever-growing stockpile of zucchini–and it freezes well. 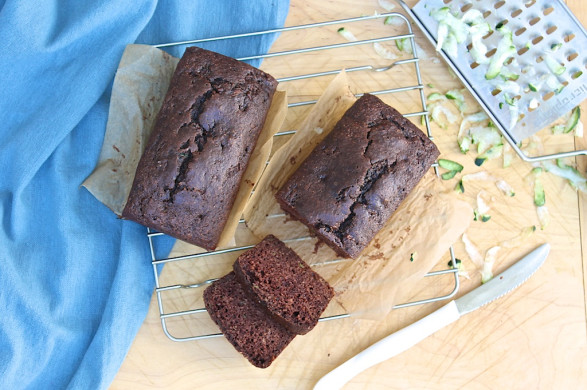 Chocolate Zucchini Bread
Though I often make this bread with no add-ins, a hint of crunch from walnuts or pecans is a nice touch.  For true chocoholics, chocolate chips or chunks–even white chocolate chips–add an extra layer of decadence!