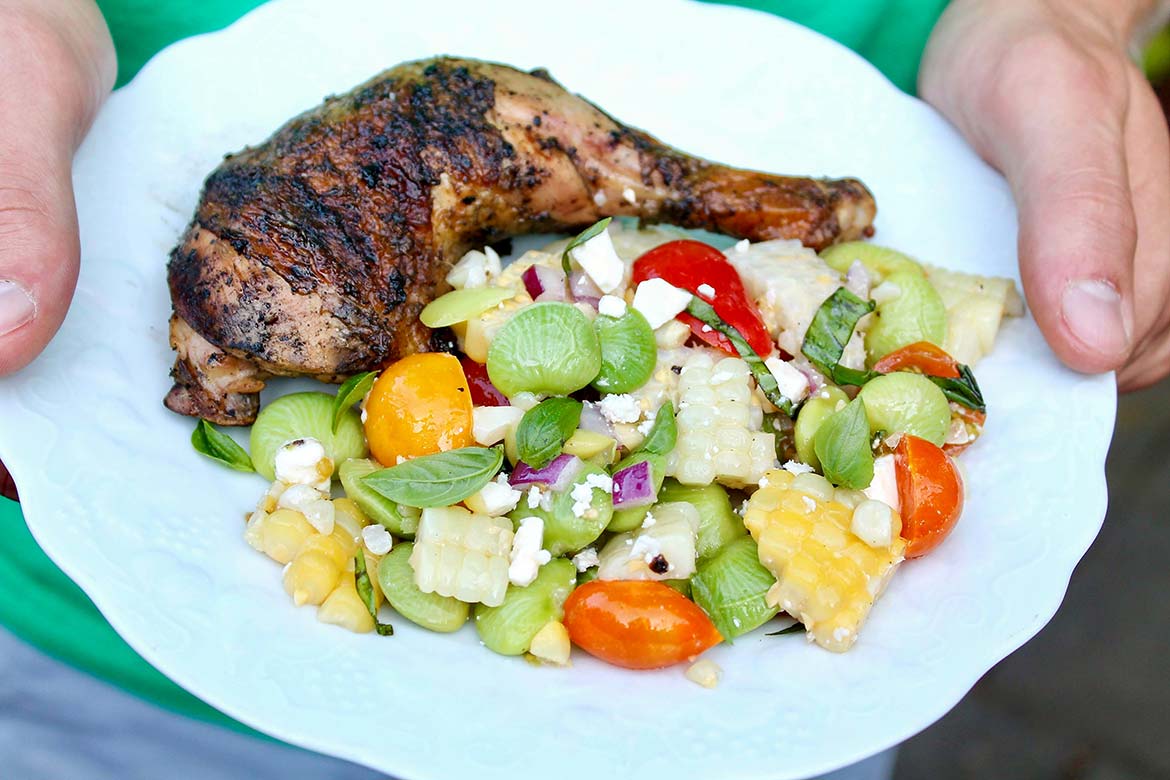 Reminiscent of the classic roadside barbecue－complete with advance prep and tender, juicy meat－this chicken dinner is a real winner. For those who enjoy, Cornell Chicken can be served with a favorite BBQ sauce on the side.

What does Dad cook best? After a little teasing that his grilled cheese sandwiches are amazing (when he turns down the heat enough to melt the cheese before the bread burns) my sons quickly rattled off their dad’s specialties.

Dad can pull off light and fluffy pancakes, perfectly grilled steak, and pan-fried shad roe with a crispy coating that our sons have long enjoyed, even during their picky toddler stages.

That said, my husband Jack likely receives more razzing for his tendency to burn popcorn and toast than accolades for his culinary masterpieces.

Taking it all in stride, he recently summed up his comfort level in the kitchen, noting that if the dish in question can’t be cooked in a frying pan or on the grill, he should probably steer clear of it.  Cupcakes and casseroles, he said, are most definitely out.

Until now, I’d never made sense of Jack’s eclectic forays into the kitchen.  (He can perfectly steam artichokes, too, which doesn’t jive with his pan/grill tenet—but there’s an exception to every rule, right?)

Realistically, Jack would much rather be honing his creative skills in our yard, and since I have the kitchen covered most of the time, we have a good system.  And though he occasionally burns the bread because he’s rushing the grilled cheese sandwiches, he’s mastered the art of low and slow cooking on the grill.

I first tried the following chicken marinade last summer after my friend Lisa shared the recipe in a neighborhood publication.  It’s said to be what countless New England firehouses use for their barbecue chicken fundraisers, and the aroma when cooking is identical to that of the many roadside barbecues that pop up this time of year. 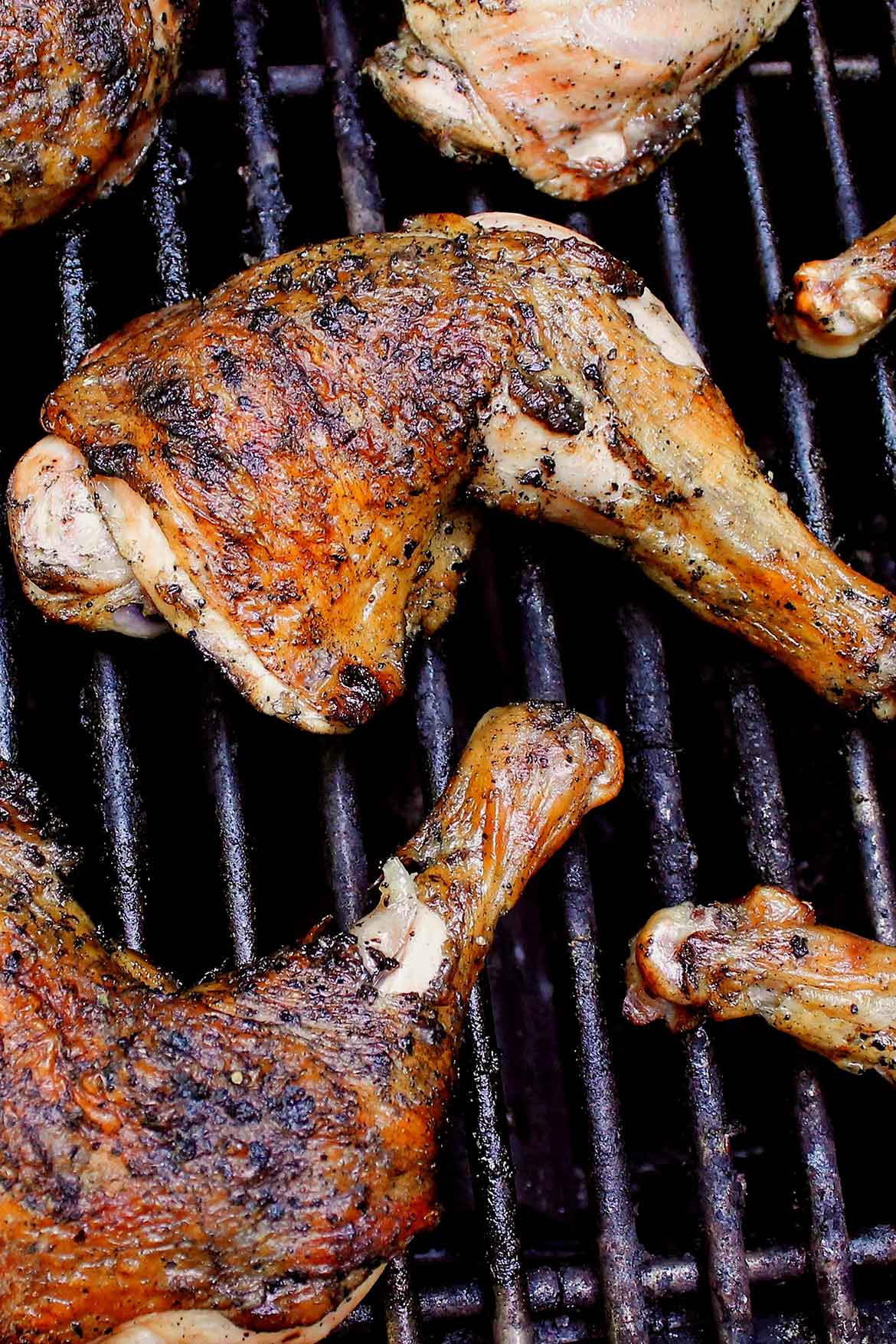 The original recipe listed the marinade ingredients, followed by a recommendation to grill low and slow.  For taste and texture that is worthy of the aroma, I’ve included detailed instructions for our favorite method.  Feel free to apply the technique to chicken pieces prepared with a different marinade or barbecue sauce as well.

This chicken is quintessential summer and ideal for entertaining because the prep is done in advance, a large quantity can be easily made, and the grill doesn’t need to be constantly tended.  That said, it’s worth making for a smaller group, as the leftovers are always welcome. 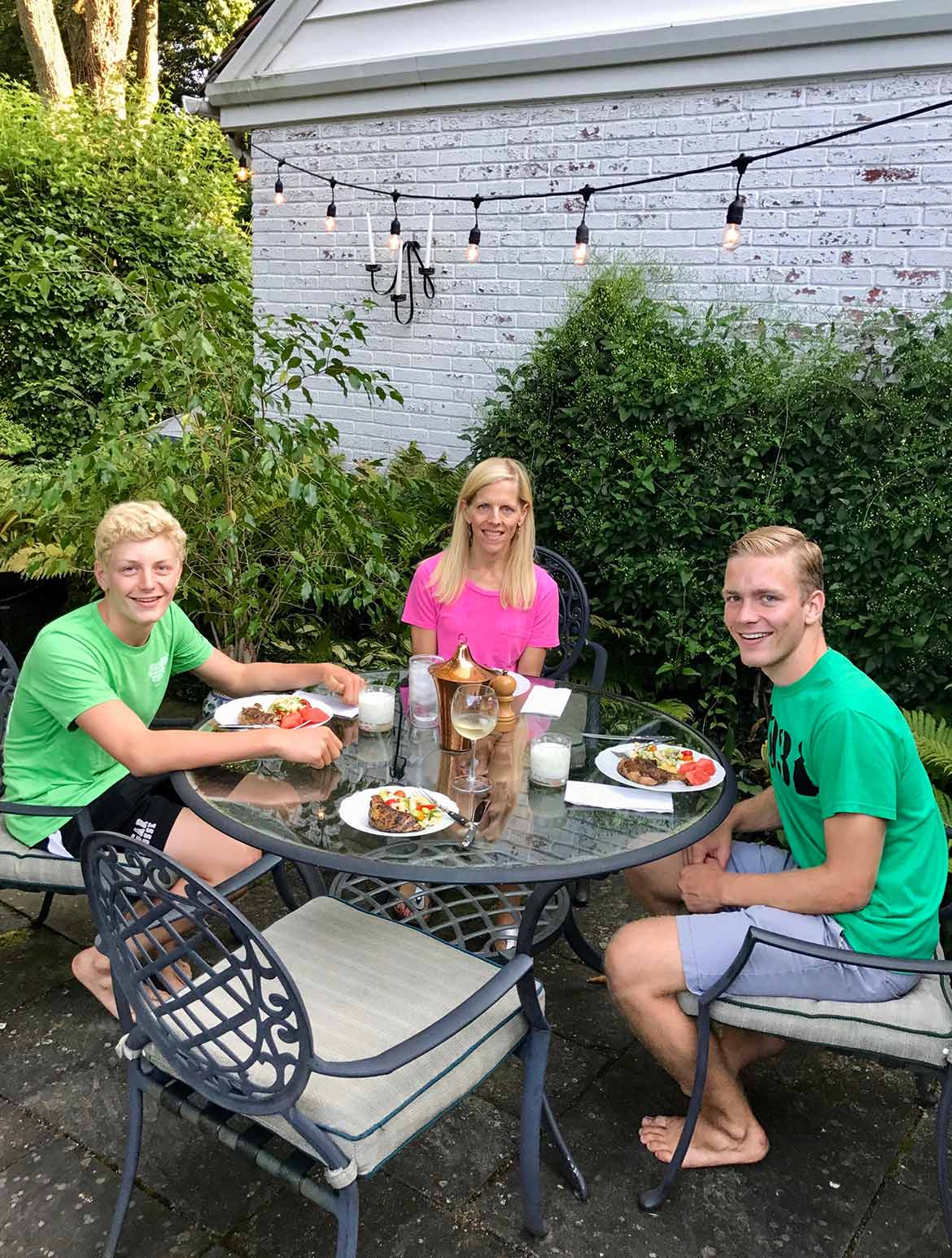 The succotash salad shown with the plated chicken is a favorite in our house. (For the recipe, click here or on the photo below.) 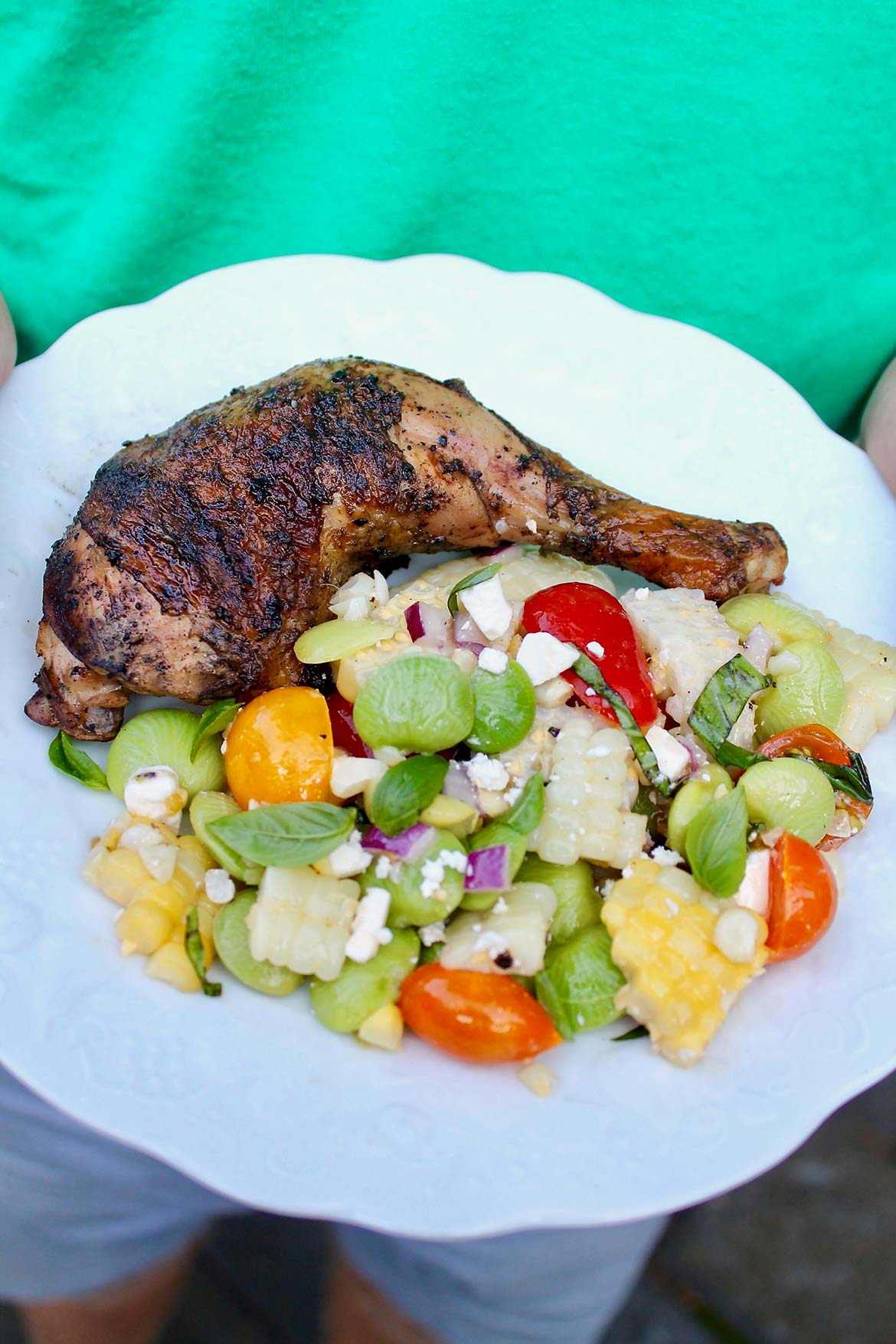 A brief history of Cornell Chicken:

Cornell chicken barbecue sauce was developed more than 50 years ago by Dr. Robert C. Baker, a former Cornell University poultry science and food science professor who also helped develop chicken nuggets, turkey ham, and poultry hot dogs.  Baker developed the recipe while working at Penn State University, although it became popular after he joined the Cornell faculty with a directive to promote New York State’s poultry industry.  The recipe is often referred to as “State Fair Chicken,” having been served for more than five decades at the New York State Fair. A testament to its wide appeal, it is reported that over 5,000 Cornell chickens are sold each day at the fair. 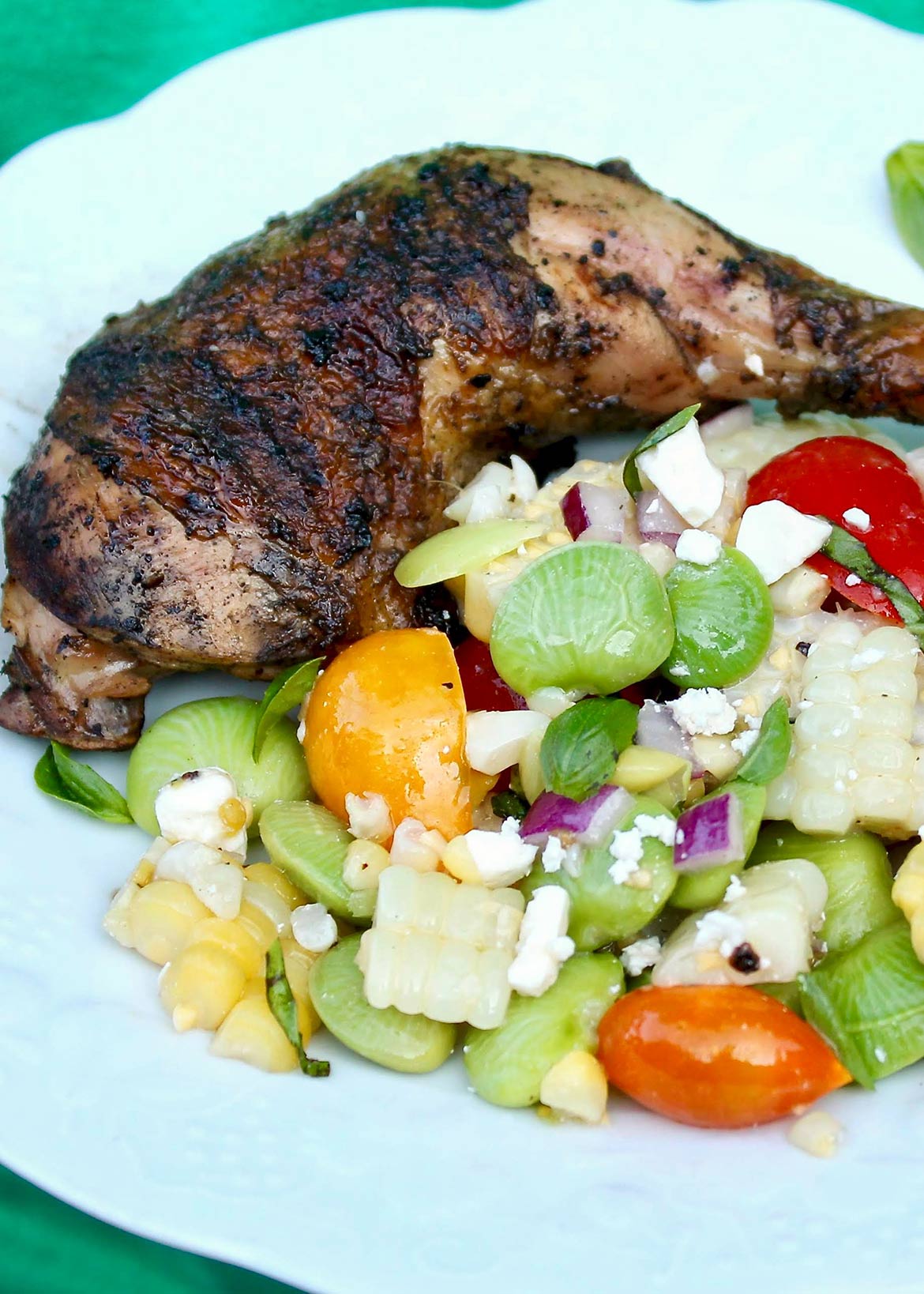 Cornell Chicken
Yield: 1 batch of sauce is enough for 8-10 chicken quarters or the equivalent amount of legs and thighs (see notes for halving the recipe)
Reminiscent of the classic roadside barbecue, advance prep and tender, juicy meat make this chicken dinner a real winner.  For those who enjoy, a favorite sauce could be served on the side.
Print
Ingredients
Instructions

Crack the egg into a mixing bowl and whisk until beaten. Slowly whisk in the oil until fully blended. Then whisk in the remaining marinade ingredients.  Reserve a half cup or so of the sauce in a separate container to use for basting later.

Marinate the desired amount of bone-in, skin-on chicken pieces (I like to use quarters; could use a combination of thighs, legs, etc.) in a zip-top bag*** for several hours, all day, or overnight.  Turn the bags occasionally while marinating to ensure even coating.

The chicken is best when grilled slow and low, basting with the reserved sauce occasionally.  Feel free to use your favorite grilling method or use ours, which is included below.

*Why an egg in the marinade? The emulsion of eggs, oil, and vinegar helps the chicken to crisp without burning as quickly as it would with a red barbecue sauce, which, unlike the Cornell sauce, contains sugar.

For a half recipe, beat the egg and use 2 tablespoons of it.  Discard the leftover egg or save for scrambled eggs later.  Alternatively, leftover sauce can be stored in a glass jar in the refrigerator for several weeks as the vinegar acts as a preservative, extending the freshness of the egg.

***A gallon-size zipper-top bag will accommodate 4 chicken quarters.  I often use two bags, each containing four quarters.  I add a little over 1 cup of marinade to each bag and save the remaining marinade for basting.

Prepare the grill for direct and indirect cooking over medium heat (350 degrees F).  If using a gas grill, use the heating element on one side and turn the other off.

Brush the cooking grates clean.  Grill the chicken, skin side down, over direct medium heat with the lid closed until golden brown, 8 to 10 minutes, turning occasionally.

Move the chicken pieces over the indirect medium heat. Continue to grill the chicken, with the lid closed, for about 20 minutes. Then brush both sides of the chicken with the reserved marinade (or with your favorite BBQ sauce when using this grilling method for other recipes) and cook, occasionally turning and brushing with more sauce, until the juices run clear and the meat is no longer pink at the bone, about 15 minutes more, give or take depending on size of chicken pieces. Because the Cornell chicken marinade contains egg, stop basting during the final minutes of grilling.  Serve warm or at room temperature.

Tip: To ensure tender, juicy chicken that is not at all dry, use a quick read thermometer inserted in the thickest part of the thigh (without touching the bone), and look for an internal temperature of 165 degrees F. 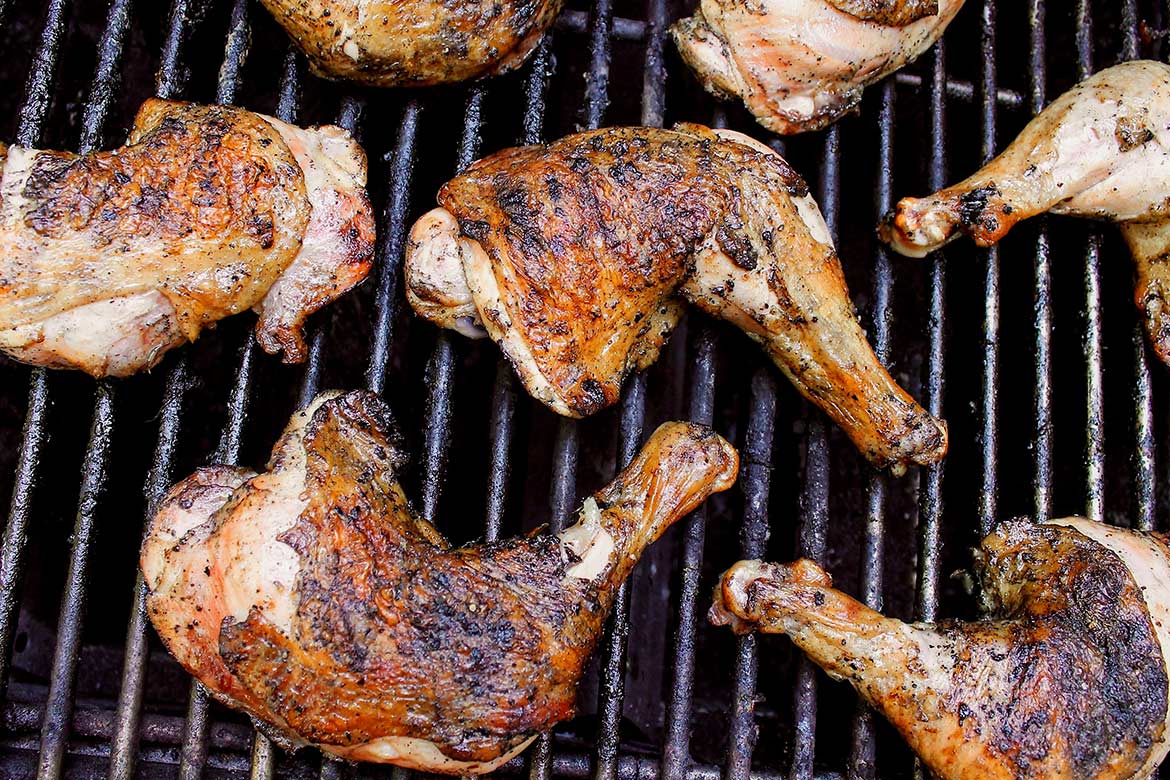