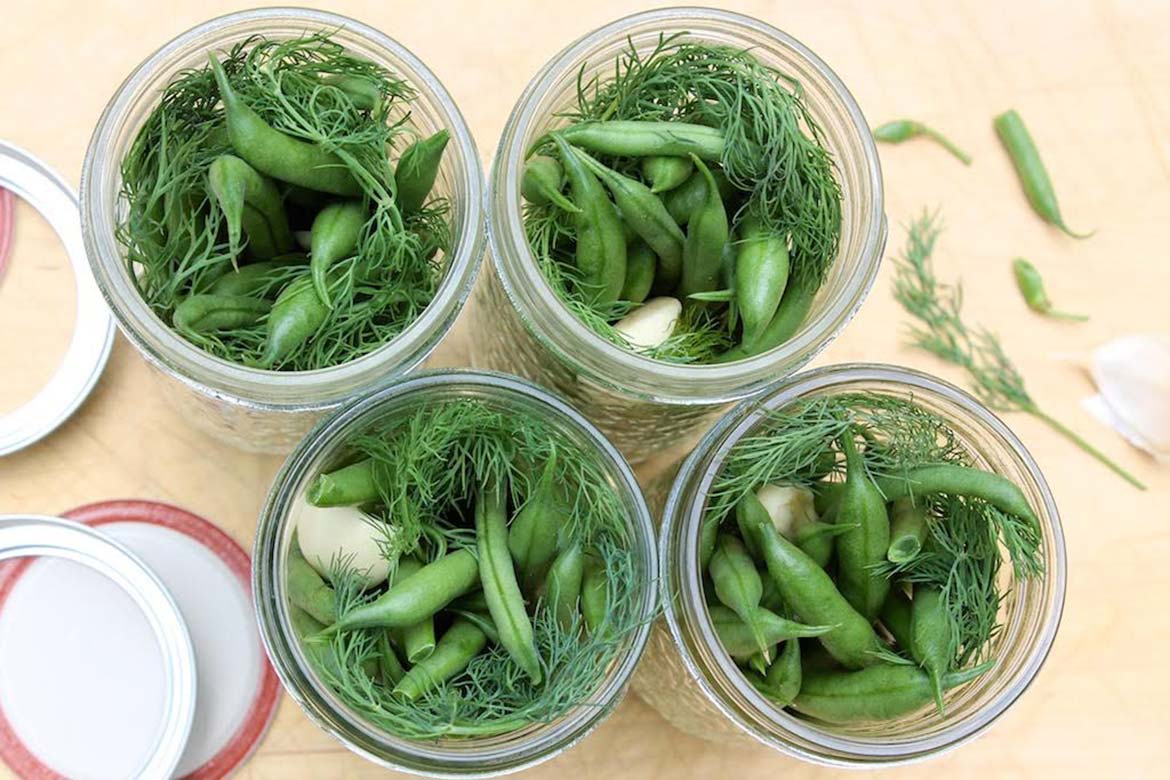 As I unpacked my older son’s duffle bag after his first summer at camp 10 years ago, I found a small glass jar carefully nestled among the dirty socks and damp towels. When I asked John about the contents, he proudly stated that they were dilly beans.

Further inquiry revealed that a resourceful counselor had given a small group of boys their first canning lesson after they helped pick green beans from the camp garden. When I told John how excited I was to taste the pickled beans, he quickly explained that the longer we waited to eat them, the better they would taste.

By Christmas of that year, I finally convinced John that the flavor of the dill and vinegar would most assuredly have permeated the beans, and it would be a fine time to dig in. With tremendous pride, he offered a single bean to each of his family members. There was just one jar and he wanted it to last.

The green beans were crunchy, perfectly pickled, and truly a hit, so I suggested that we ask for the recipe. Then everyone could enjoy the fruits of his labor, and as soon as green beans were back in season, we could make more. 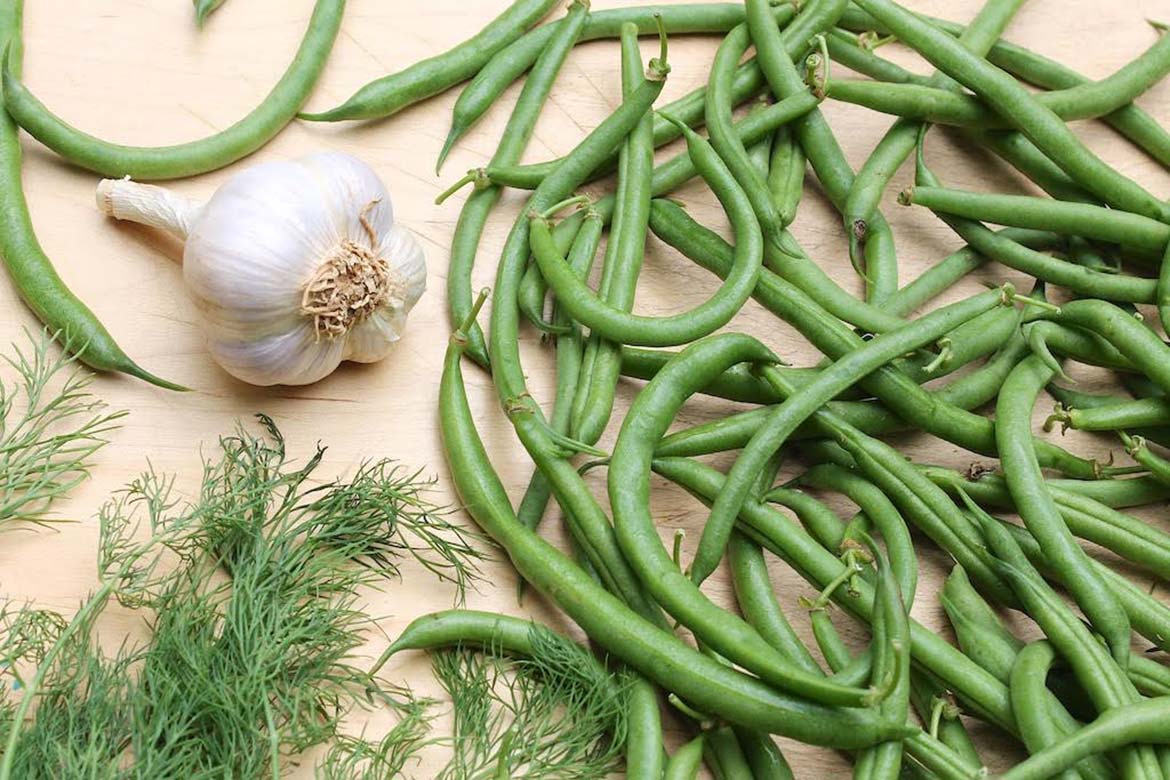 Because that first, long-awaited jar was so well liked, we’ve been making them ever since. In fact, John recently finished his second summer as a counselor at the same camp, where he tended that very garden with his own group of campers. And if 10-year-old campers can successfully can green beans with a bit of guidance and supervision, I figured we could all do it!

However, because canning and food safety go hand in hand, I reached out to Martha Zepp, a food preservation consultant with the Penn State Extension office in Lancaster. I wanted to make certain our recipe and method met her approval, and I figured she might have some additional tips for those interested in canning for the first time.

Most pickled green bean recipes call for full-length beans (not snapped). My recipe calls for 12-ounce jars, which easily accommodate the full-size beans. For those who may only have shorter 8-ounce jars, Martha notes that beans longer than four inches won’t fit. To make use of the shorter jars, she recommends marking a four-inch space on a cutting board, placing the beans between the marks, and slicing off the ends.  That way, all of the beans will fit neatly in the jars and none extend beyond the brine. 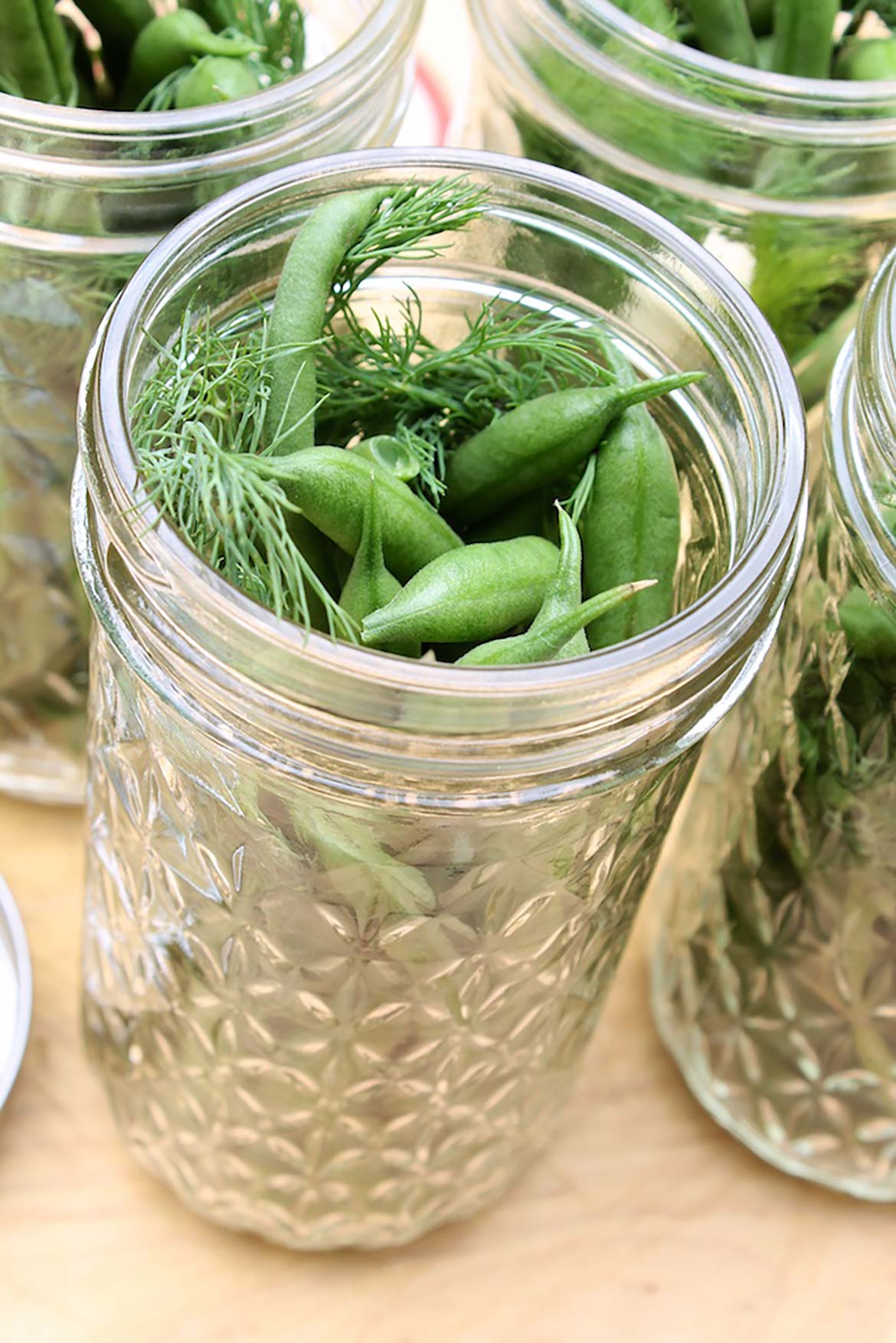 For convenience, I’ve included additional tips from Martha along with my own helpful hints in the notes section of recipe.

As an added bonus, this recipe is lower in salt than most pickle recipes, sugar-free, and requires a minimum of ingredients. It can also be done without the use of fancy canning equipment. Basic canning jars, however, are essential and can be purchased inexpensively at the grocery store and used for many other purposes. 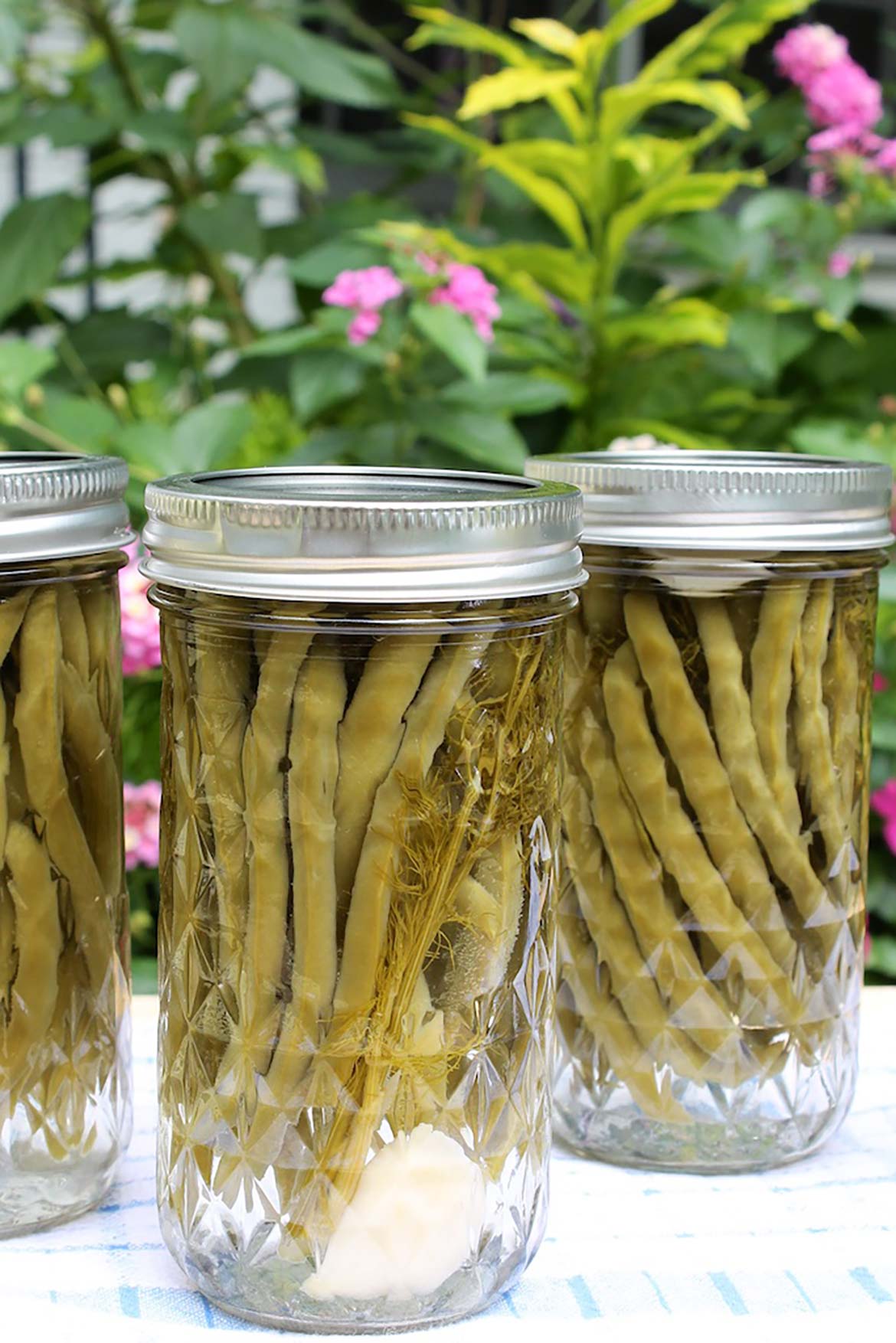 What is pickling salt and is it necessary?

While pickling salt is certainly designed for pickling, it isn’t the only salt that can be used. Kosher salt is a great alternative. Generally speaking, it’s recommended to use a brand like Diamond Crystal, which is pure salt with no additives. Morton contains anti-caking agents, which some say make the brine a little cloudy. I have used both brands of kosher salt and have been hard-pressed to notice a difference.

Pure sea salt can also be used in pickling. Note that the size of the grain, which varies widely among sea salts, will affect the level of saltiness (finer grain=saltier taste). Similarly, pickling salt has a finer grain than kosher salt.

Although table salt is considered safe to use in pickling, it isn’t recommended because the quality of pickles may suffer due to its additives. I have not tried table salt to offer a first hand opinion.

Bottom line: I use kosher salt because it’s what I have on hand and prefer the slightly less-salty taste created by the larger granules.

Martha recommended the following “basics of home canning” link as a useful resource for beginners:
http://extension.psu.edu/food/preservation/safe-methods/basic-canning

For readers interested in more information about making pickles, go to
http://extension.psu.edu/food/preservation/safe-methods/quick-process-pickles 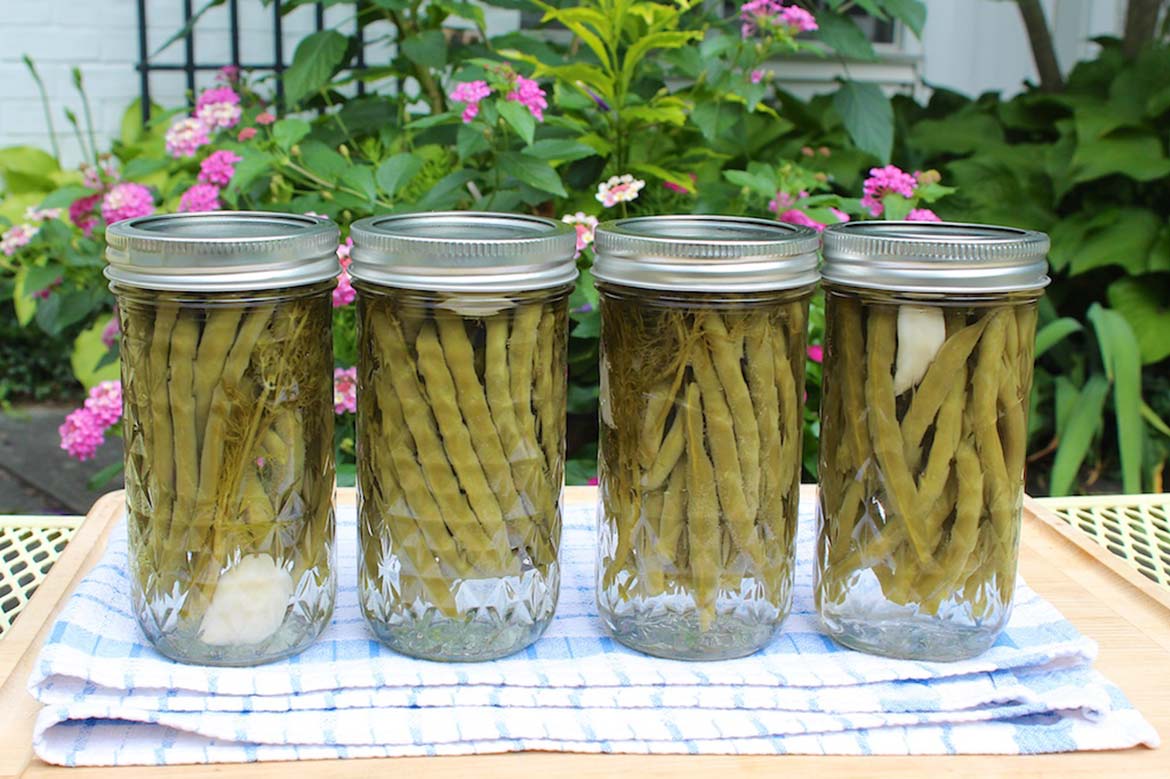 John helping me with a batch of dilly beans in 2012 followed by a very old iPhone pic. 😀 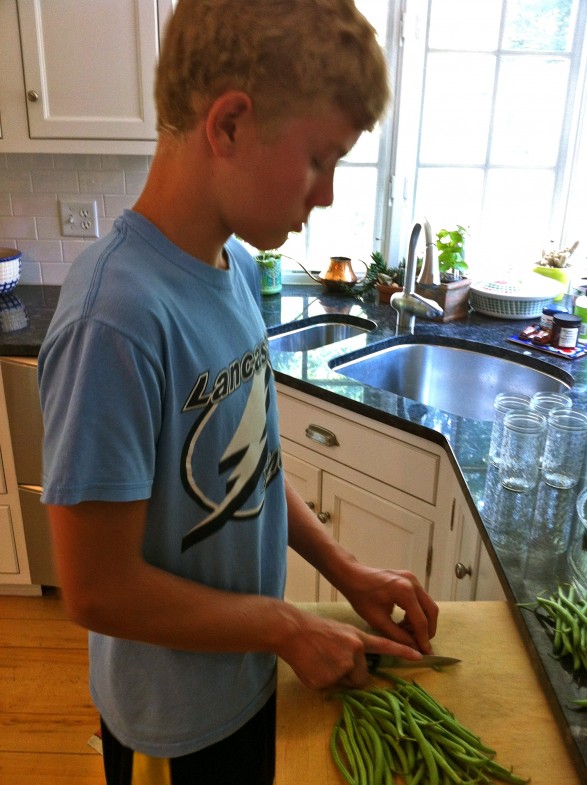 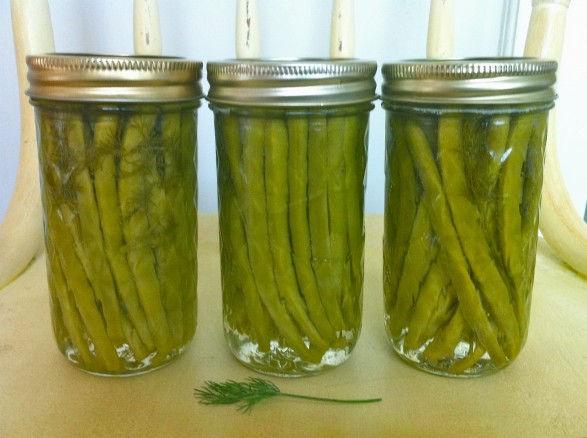 John's Dilly Beans
This is a simple canning process requiring no fancy equipment – I use one of my stockpots instead of a canner.