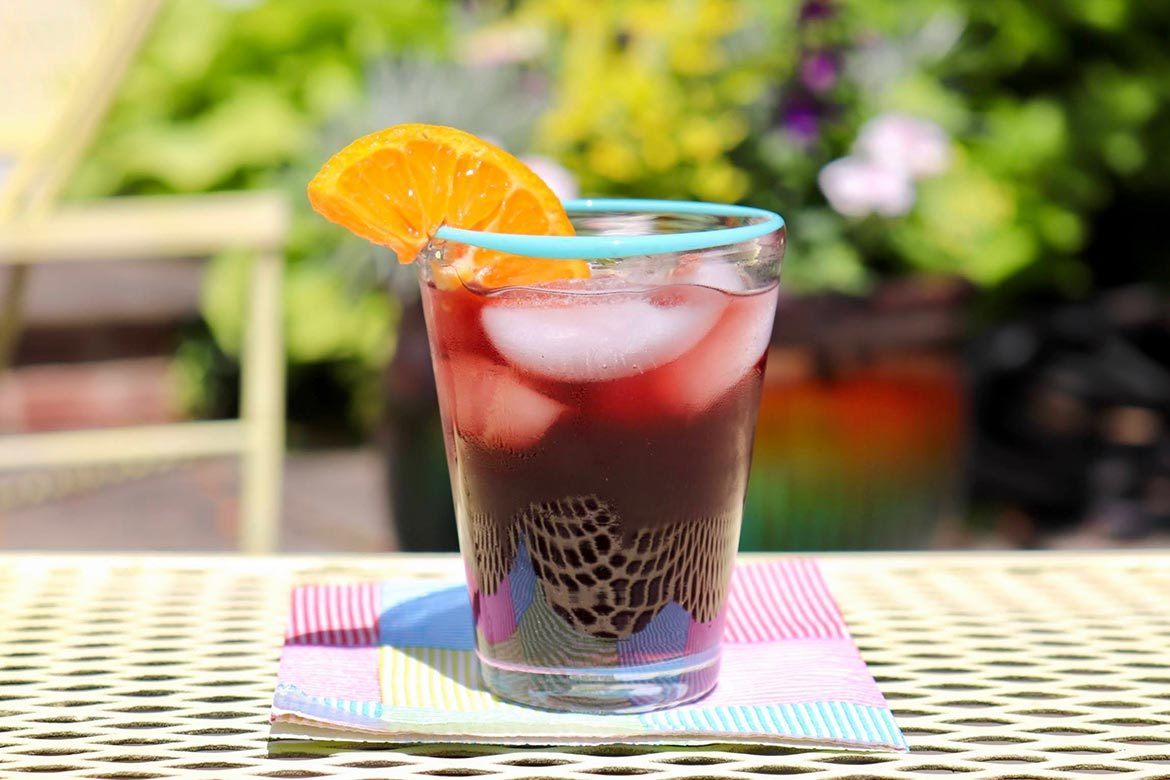 Thirst-quenching tea doubles as a refreshing home remedy thanks to elderberries and their natural ability to fight cold and flu viruses.

I’ve been taking a teaspoonful of homemade elderberry syrup before breakfast every morning for about a year now. I fear I will jinx myself by saying this (!), but I have not had a cold in all that time.

On the occasion I’ve felt a scratchy throat, I’ve taken an additional teaspoon or two throughout the day, gotten a good night sleep…and have managed to avoid the cold.

Wondering if this is merely a coincidence and I’ve simply been lucky over the last year or so, I’ve been tempted to stop taking my daily dose. But it’s pretty tasty, and given the ongoing pandemic, I figure the small effort to make a batch every couple of months is worth it.

My family hasn’t been as faithful, and my younger son recently came down with a mild cold. The same evening, he mentioned that he thought he had a temperature. I took it and it was nearly 103℉.

He didn’t let on that he felt THAT bad, so I was shocked when I read the thermometer. I told him he absolutely needed to get tested for COVID-19. (As a side note, he had no known exposure to someone with the virus.)

Here’s a brief synopsis of what happened over the following days:

He got tested the next morning (he said the swab test wasn’t that bad), and was told the test results would take 5-7 days because of the high level of testing and priority given to patients in the hospital or those awaiting a hospital procedure.

In the meantime, everyone he was in contact with over the last two weeks had to quarantine. Because he had a severe sore throat, his doctor also tested him for strep. That test came back negative.

Over the next two days, his temperature spiked to nearly 103℉. His daytime temp was fairly normal, and occasionally below average. It was at night when the fever soared. He had minor cold symptoms but his chief complaint, other than the fever, was his throat.

As a mom, the biggest challenge was maintaining separation from my sick son. I just couldn’t make him stay in his little bedroom all day, even though I was moderately concerned about catching whatever this was.

Instead, I tried to minimize the amount of time we breathed the same air in a confined space. I encouraged him to sit in our screened-in porch or in a shady spot in the backyard, and we ate dinner together outside. (Although his sore throat made it difficult to swallow, he still had an appetite!)

By Friday of that week (the sore throat and fever started on a Monday and he was tested on Tuesday morning), he felt reasonably good, although his throat still hurt. When the call came that his test was negative, I could see the relief wash over his face. His biggest concern was that he would spread coronavirus and cause someone to get very sick.

He was subsequently tested for mono, and the results were also negative. One physician thought it might have been hand, foot, and mouth disease, which is apparently running rampant among younger children right now. The ultimate theory was that he simply contracted a very nasty virus－just not the one that’s in the news every day.

Though I brewed my first batch of this tea when his symptoms were already flaring (ideally elderberry should be taken as a daily preventative or when the symptoms first appear, sort of like Zicam), he drank it for hydration and any benefits it might still provide. (Studies have shown elderberry appears to reduce the duration and severity of cold and flu viruses.) 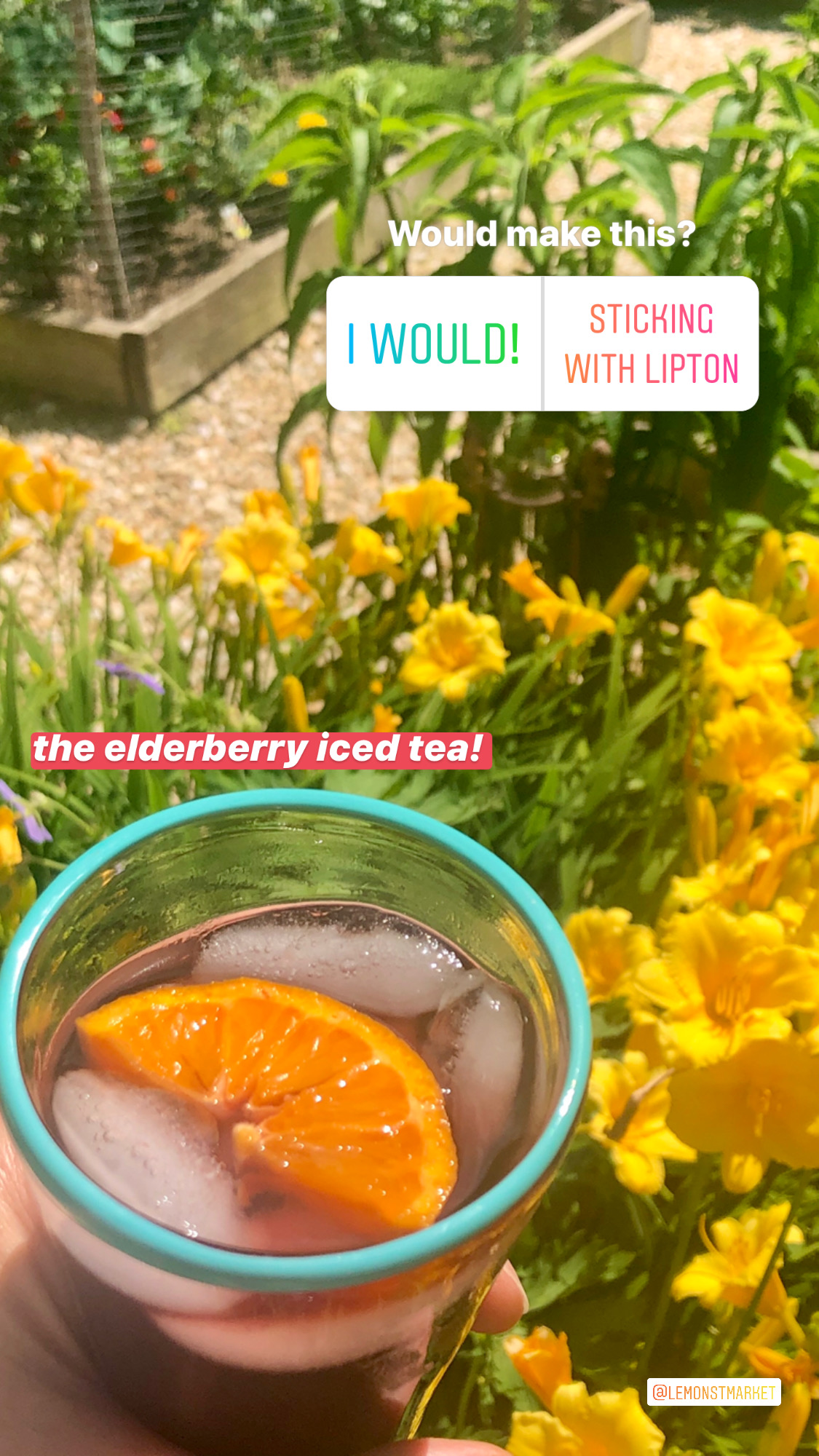 I posted this on my Instagram story, wondering if anyone would be interested in the recipe. It’s the first time 100% of the respondents voted the same way. (see next photo) Not sure if it was the promise of refreshing flavor or potential for germ defense! 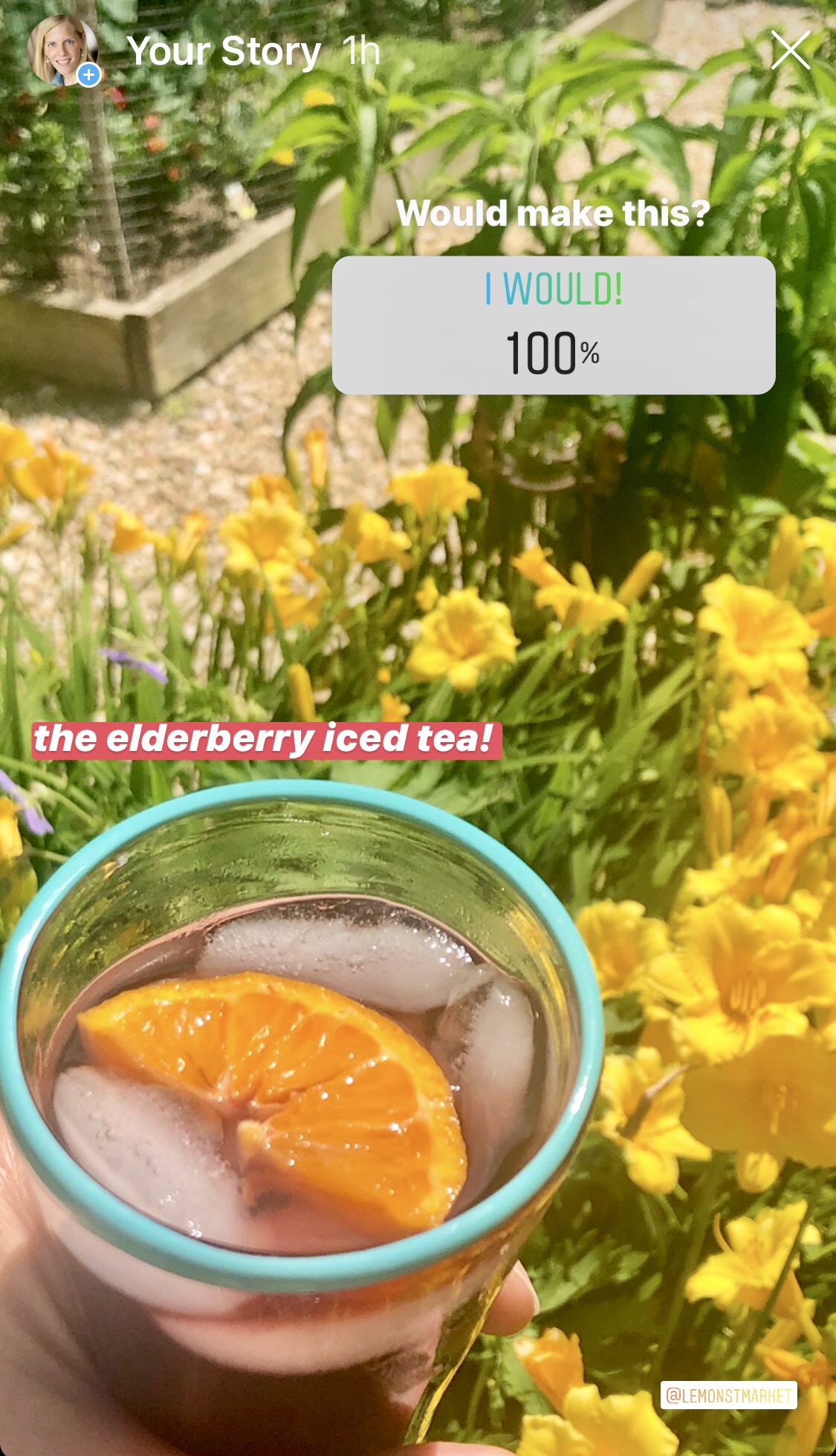 I’ve enjoyed a glass as a little afternoon treat, and have shared the recipe with a few friends who reported that they loved the robust berry flavor and used the same amount of sugar as I did. Sweetener in tea is such a personal preference, so I mention, below, what we like per batch but encourage you to sweeten to taste.

For those who prefer, this tea could absolutely be reheated and served as a hot beverage. 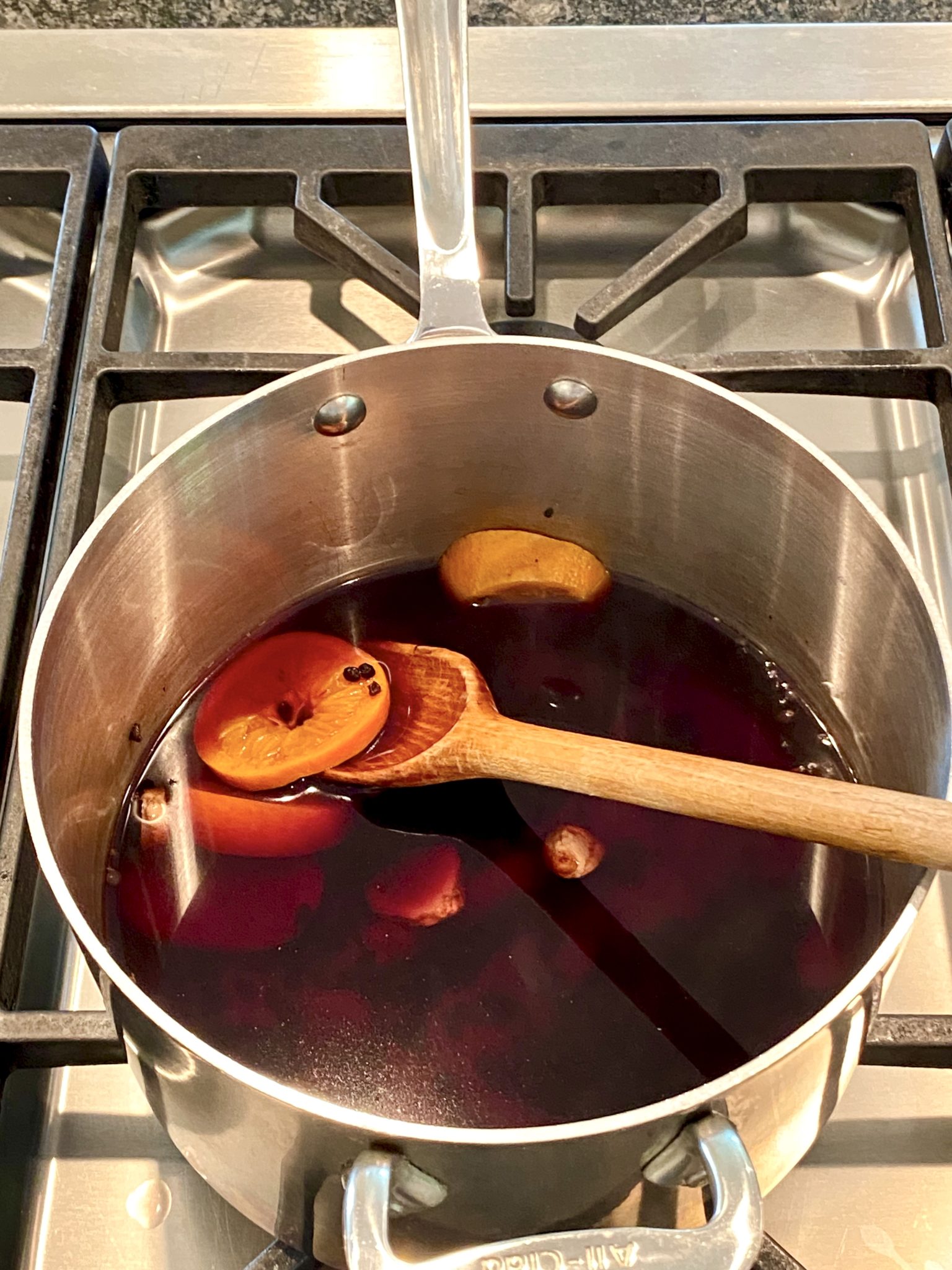 To make the tea, simply add everything to a pot, bring to a boil, and then remove from heat, cover, and let sit for 30 minutes. 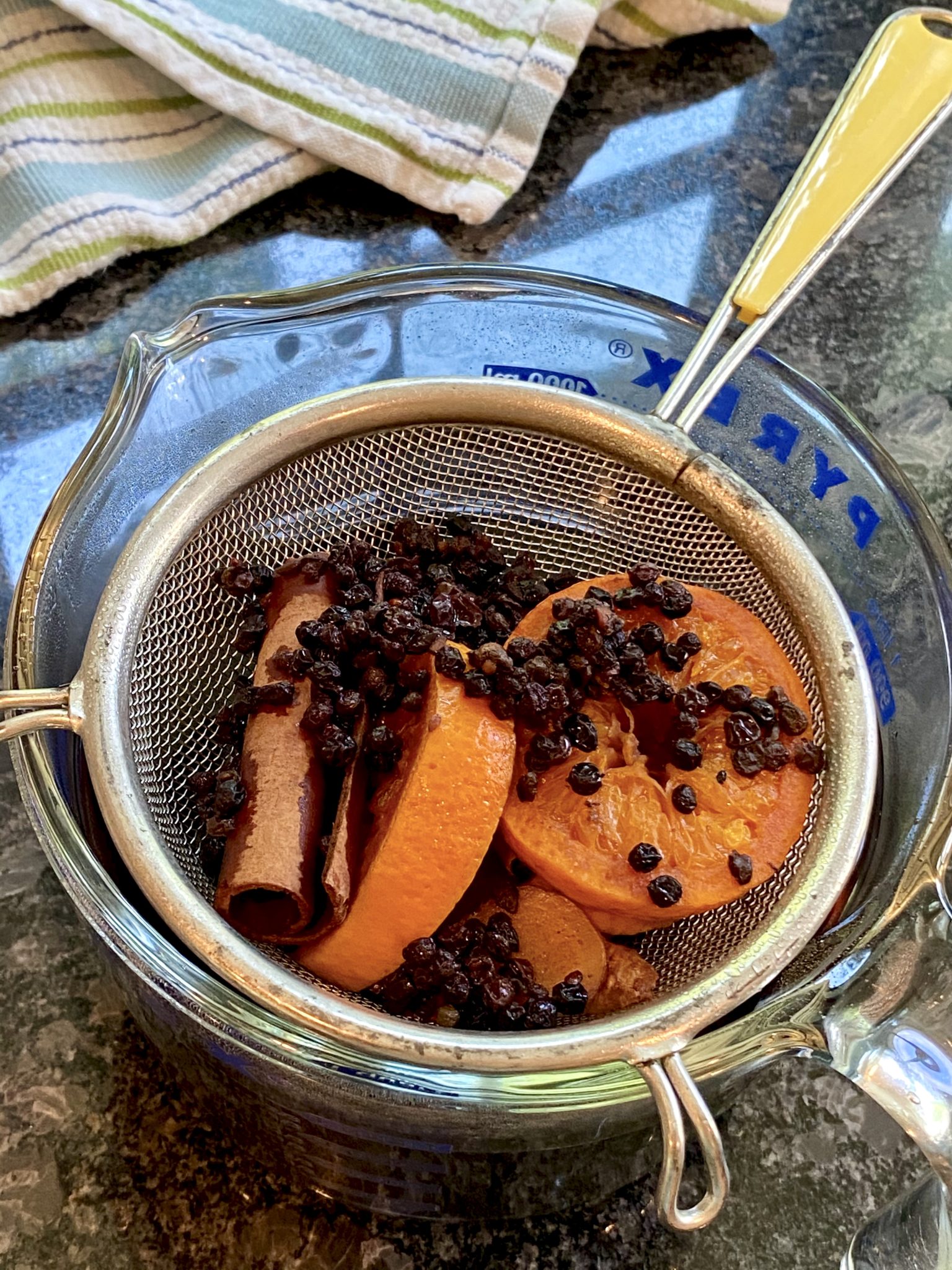 After 30 minutes (a few minutes shorter or longer is fine), strain out the solids, squeezing to extract some of the juice from the orange or clementine slices. Sweeten to taste, adding a little more water if you prefer a weaker brew, and chill. 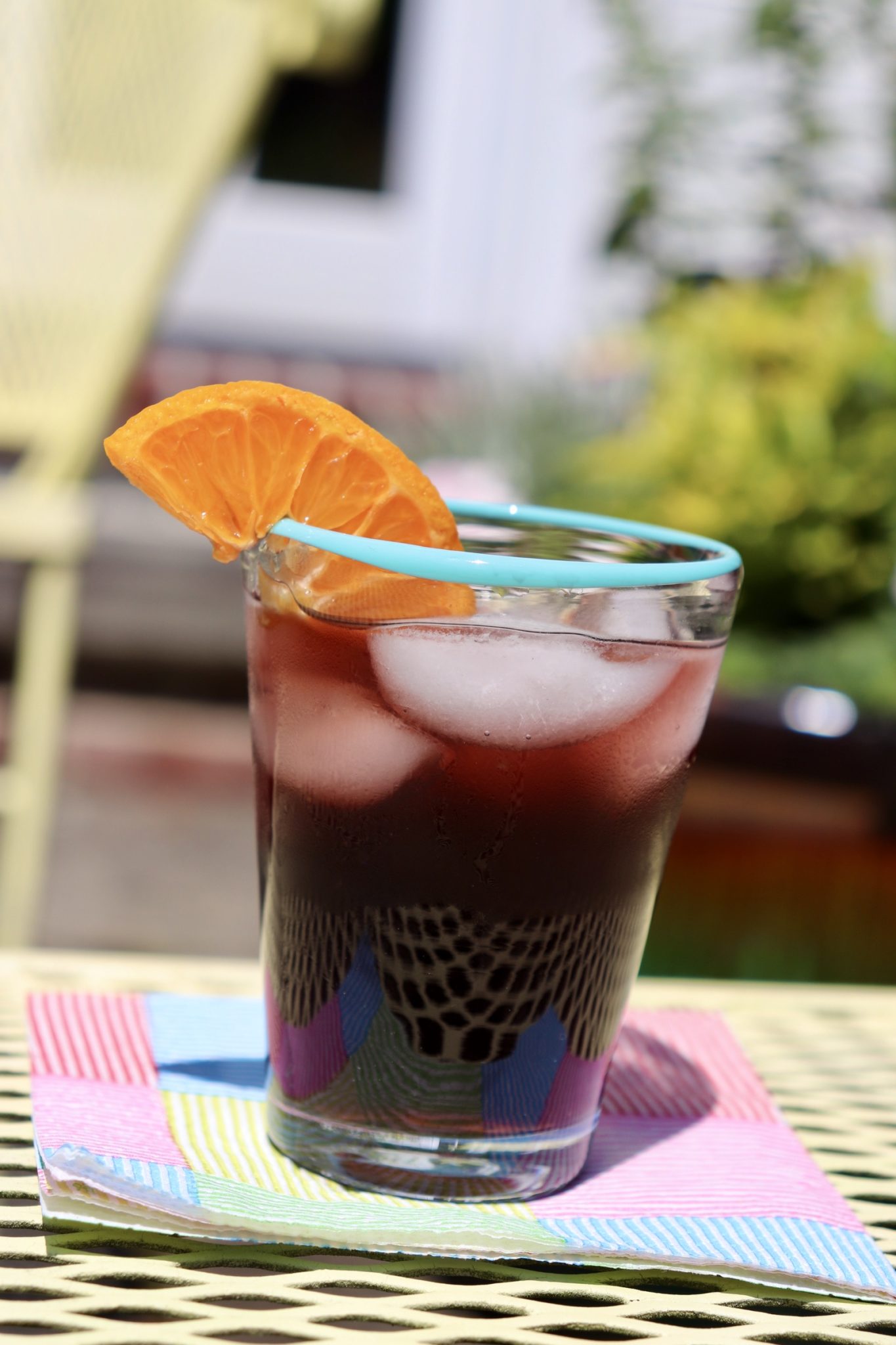 As the current pandemic persists, I am especially mindful of high risk friends and family members and those whose jobs have been severely impacted. So while we wait for a reliable treatment or vaccine, we can keep wearing our masks, washing our hands, and maintaining safe distances－and perhaps swigging some elderberry tea or syrup! 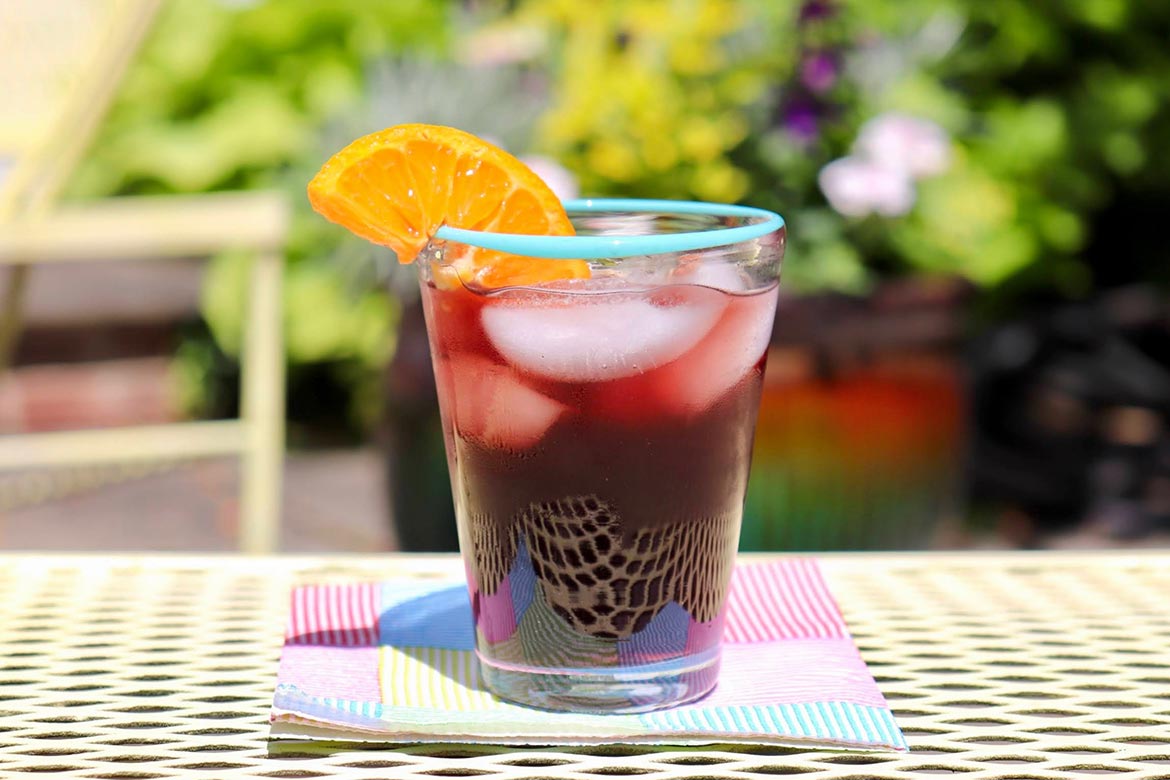 This tea could absolutely be served hot, too.

I purchase the dried elderberries in bulk at Lemon Street Market. If you aren’t local and cannot easily find them at a store near you, you can find them online. Click here for a link to the brand I purchase (Frontier Co-op). When purchasing online, you will likely have to purchase a 1-pound bag, but the dried berries have a shelf life of one year when stored in a cool, dry place. 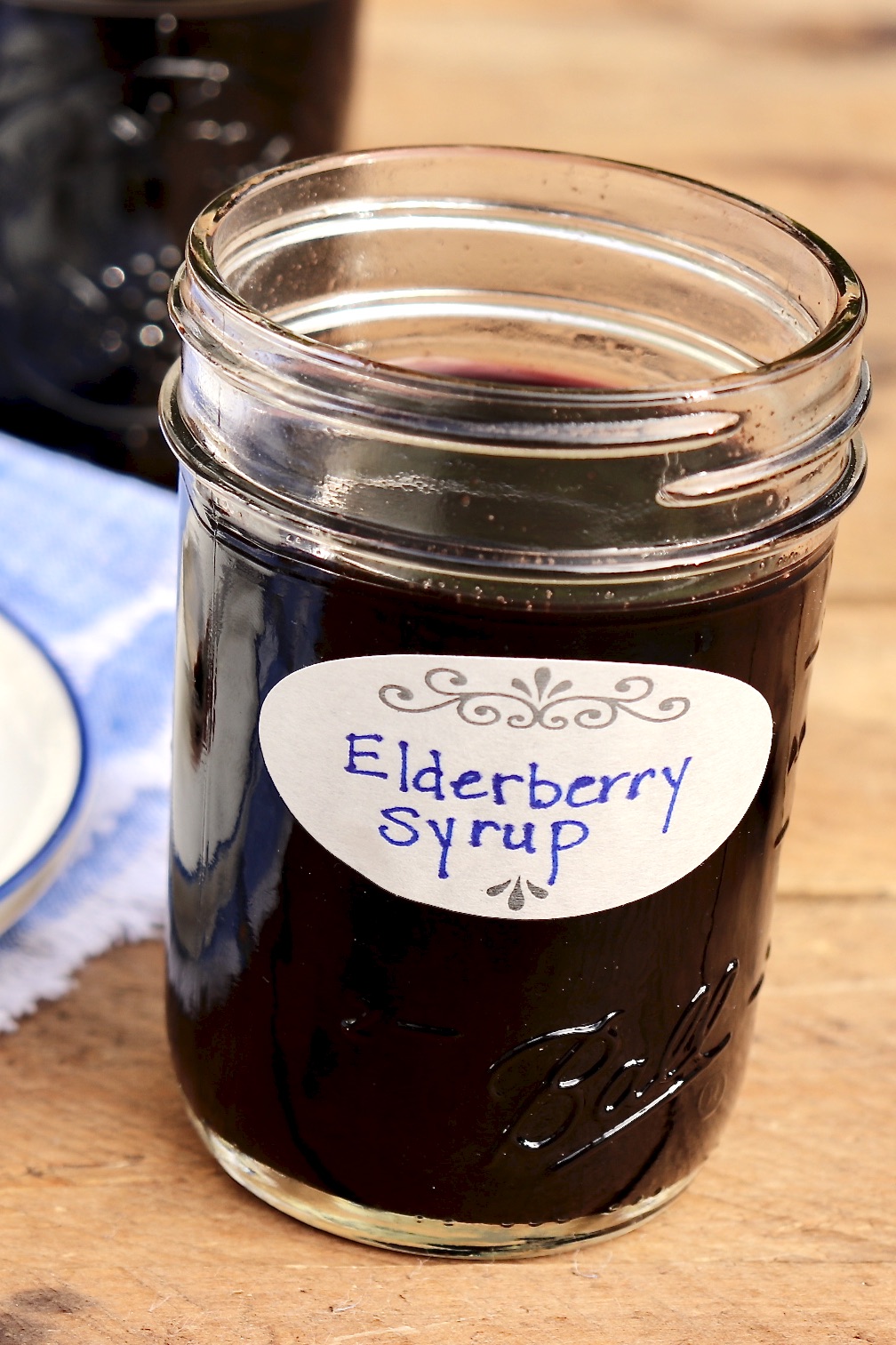 Elderberry syrup provides an excellent alternative to the tea. For the recipe and additional information on the merits of elderberries, click HERE or on the photo.