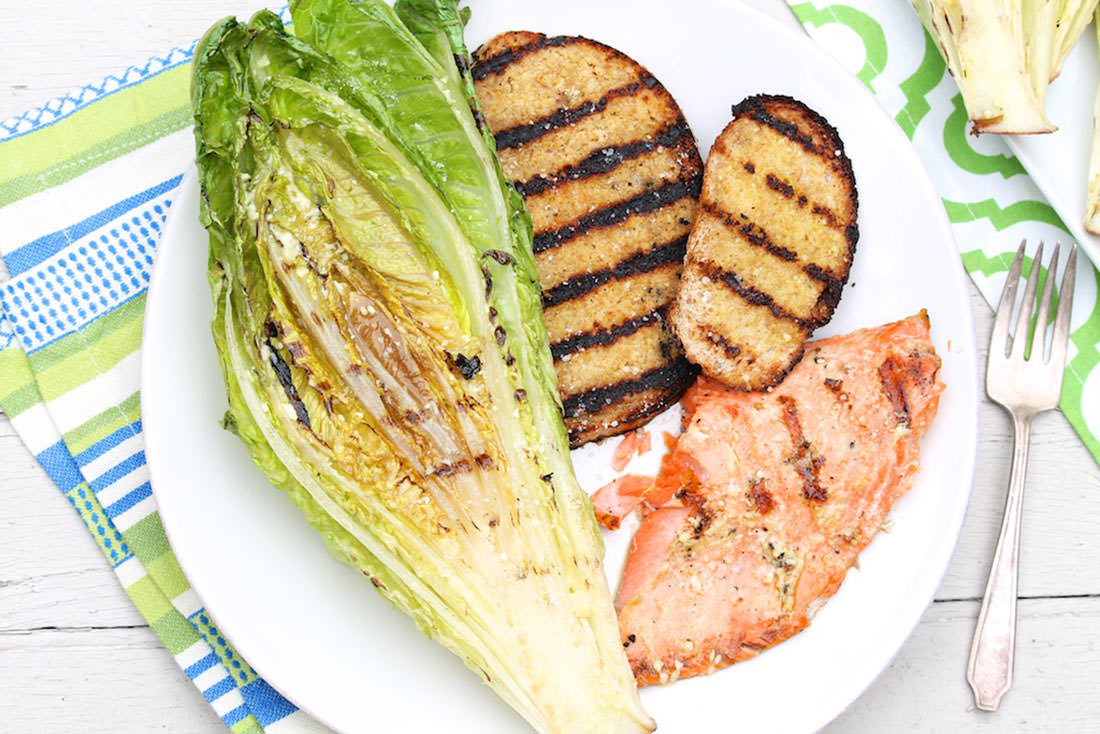 Grilled Caesar salads are a summertime classic and can be a quick, well-rounded meal. This bright-tasting dressing is easy to prepare—no need for a blender or food processor—and is egg and anchovy free. Anchovy fans may absolutely serve them alongside, of course, and I’ve included my favorite ways to turn the salad into a complete meal.

Nearly every Saturday morning, my husband and I stroll through the aisles of “Market.” Officially, of course, it’s Lancaster Central Market, but when you’re the country’s oldest farmers’ market—120 years and counting—and you’ve been ranked with the best markets in the world, the locals know what you mean.

Jack and I divide and conquer because I tend to be a little slow for his taste. He enjoys the trip as much as I do though, as much for the social element as for Wendy Jo’s pecan bars. He carries more than his fair share of heavy bags, too.

I bring a list, but my plan for the week often shifts as I take in the vast array of seasonal produce, fresh meats, and local cheeses. Sometimes, inspiration comes from the stand holders themselves.

Such is the case with the following recipe. I began frequenting Brogue Hydroponics’ stand when they first brought their produce to Market nearly three years ago. Between the incredibly fresh vegetables and the delightful demeanor of stand holder Mary Kilgore, it’s always a favorite stop.

In an area where traditional farming has long been a mainstay, the hydroponic concept piqued my curiosity. Bob and Nancy Kilgore started the company in 1983 on their property in York. Currently, their son, Jesse, who is also Mary’s husband, manages the operation. Though the family property is vast, most of the land is wooded, hilly, and not well suited to traditional farming. Hydroponic farming circumvents these obstacles by using water instead of soil as the growing medium in the controlled environment of a greenhouse—the Kilgores have 10 of them.

The Kilgores also employ aquaponics in their operation. According to Mary, this is essentially the marriage of aquafarming (raising fish) and hydroponics (the soil-less growing of plants) where fish and plants are grown in a single integrated system. The fish waste provides an organic food source for the plants, and the plants naturally filter the water in which the fish live. Mary mentioned the added benefit of water conservation as the water is constantly reused.

Though the Kilgores’ operation isn’t certified organic, they do employ an organic approach, which can be partially illustrated through one of their pest management techniques. Lettuces, for example, attract aphids, which can ultimately destroy the lettuce. For pesticide-free control, ladybugs are brought in and released because they feed on the aphids.

All of these elements allow the Kilgore family to grow a wide variety of produce throughout all but the coldest months of the years. Interestingly, Mary didn’t always work for the company, but as a Lancaster City resident and frequent Market shopper, she long thought the company should secure a stand there. She felt passionately enough about the market presence that she told her husband and in-laws she would quit her job to take on the responsibility of running a new stand. And that’s exactly what happened. Mary admitted that the days are long and tiring but stressed that she truly loves it and, in her words, “it’s been a real blessing.”

Because Mary knows I enjoy leafy greens, she shared her family-favorite side salad with me last spring. It’s a recipe Mary prepares often as she typically has the ingredients on hand. I, in turn, have used some of the dressing to marinate chicken and salmon—shrimp would also be good—for an easy, complete meal. Brushing some of the dressing on hearty bread and lightly grilling it, too, offers a welcome departure from the traditional crouton. (If at Market, stop by Ric’s Bread or Thom’s BREAD for some worthy options. For the gluten-free crowd, Udi’s white bread is a surprisingly delicious alternative that holds up well on the grill.) 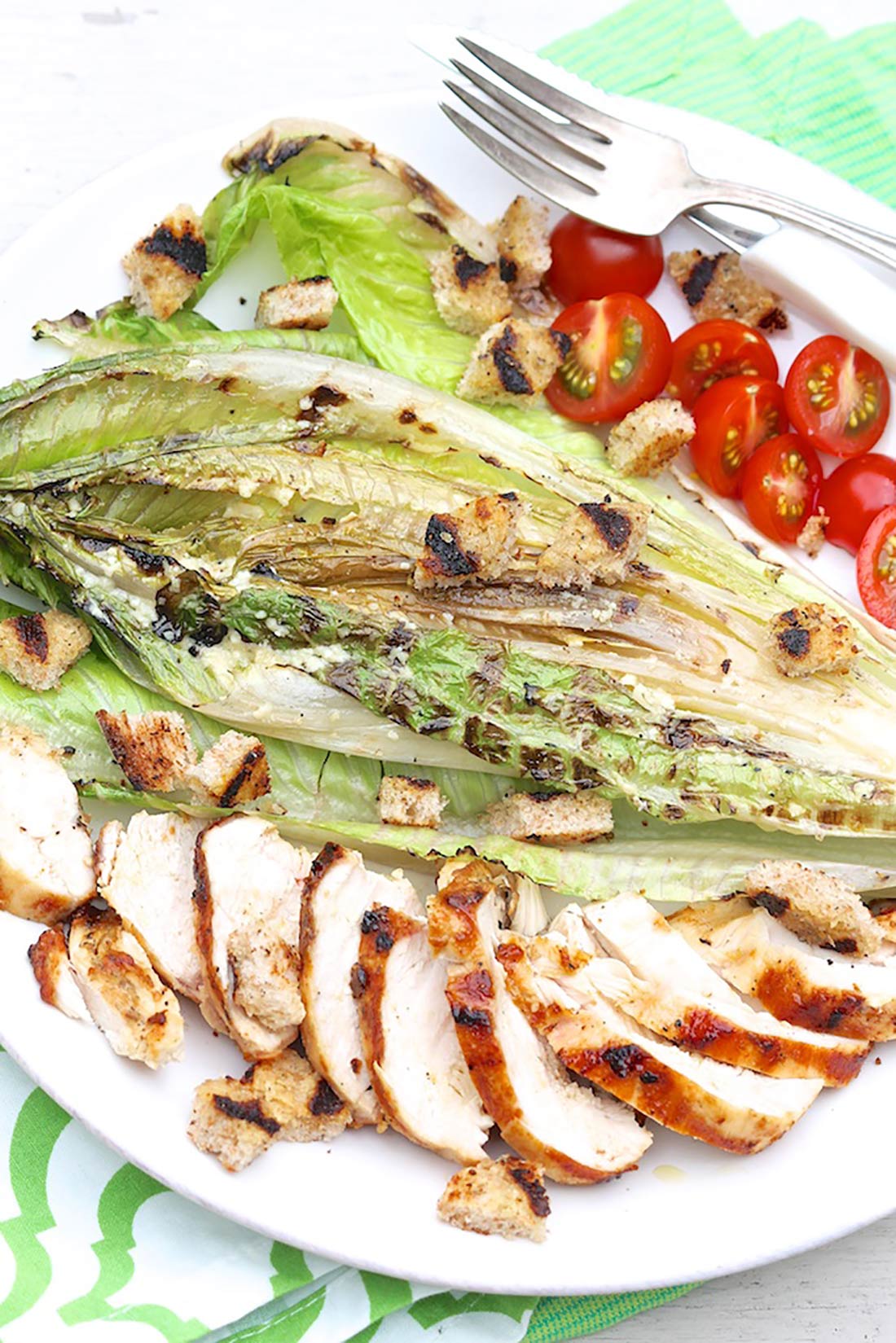 These photos show how simple it is to make a complete meal out of this easy, seasonal recipe for grilled Caesar salad.  I use some of the dressing to marinate chicken or salmon—shrimp would be good, maybe even tofu for a vegetarian option—and grill that, too.  Basting bread and giving that a quick sear provides a delicious option to the traditional crouton, whether served whole or chopped into quickie croutons. 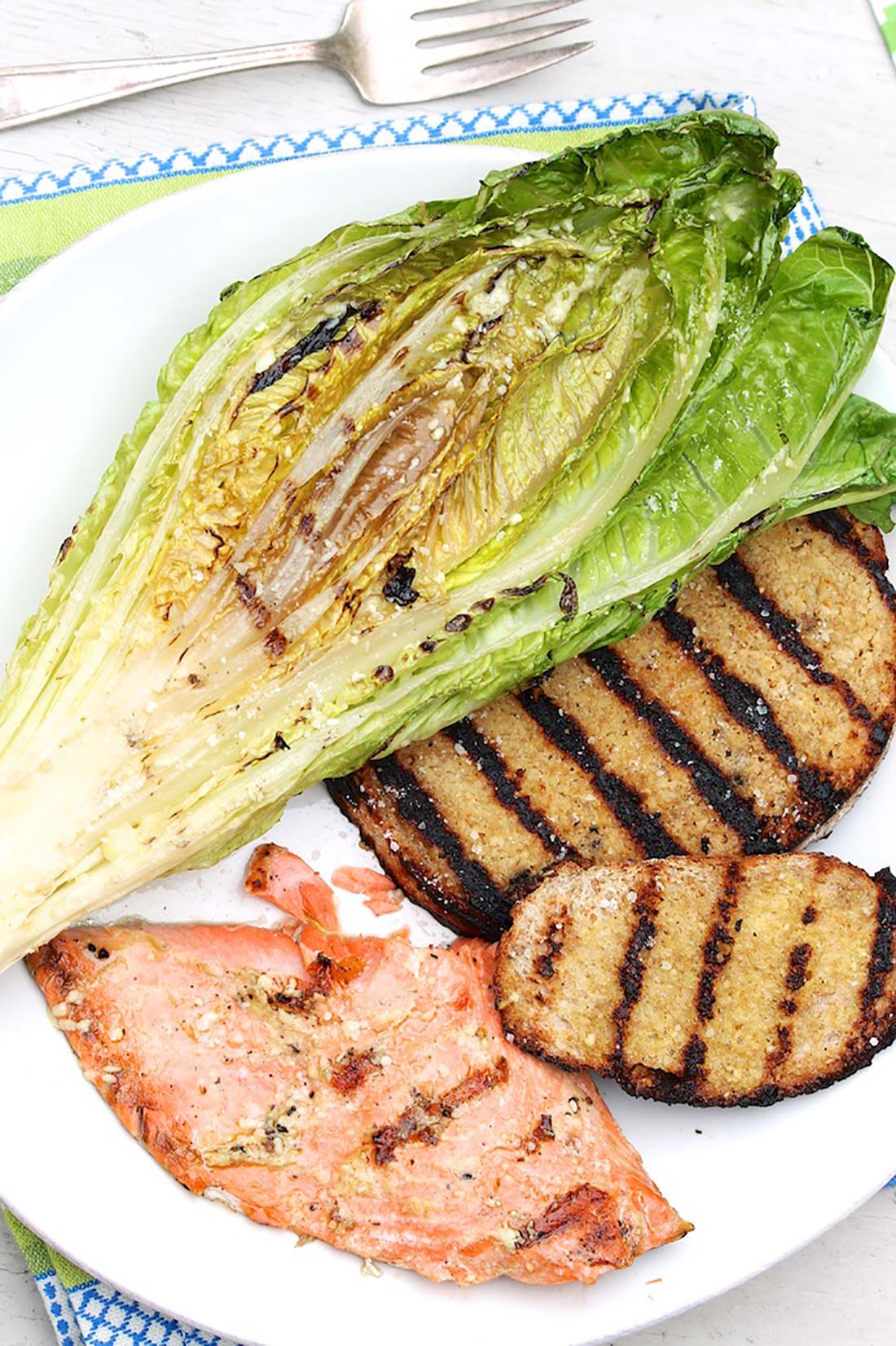 Bonus recipe!  This is a super simple recipe for watercress that Mary shared with me, and I recently made it for the first time. The ginger is an unexpectedly good partner to the peppery watercress.  It’s Mary’s favorite way to enjoy this uber-healthy green, which she sells it year-round.

In a skillet with a 9- to 10-inch diameter, heat the oil over medium heat. Add the ginger and sauté for one minute.  Add the watercress and wilt for about a minute.  Add salt and pepper to taste.

Grilled Caesar Salads
The bright-tasting dressing is easy to prepare—no need for a blender or food processor—and is egg and anchovy free. Anchovy fans may absolutely serve them alongside the salad. See the recipe notes for some helpful tips and my favorite ways to turn this into a complete meal.