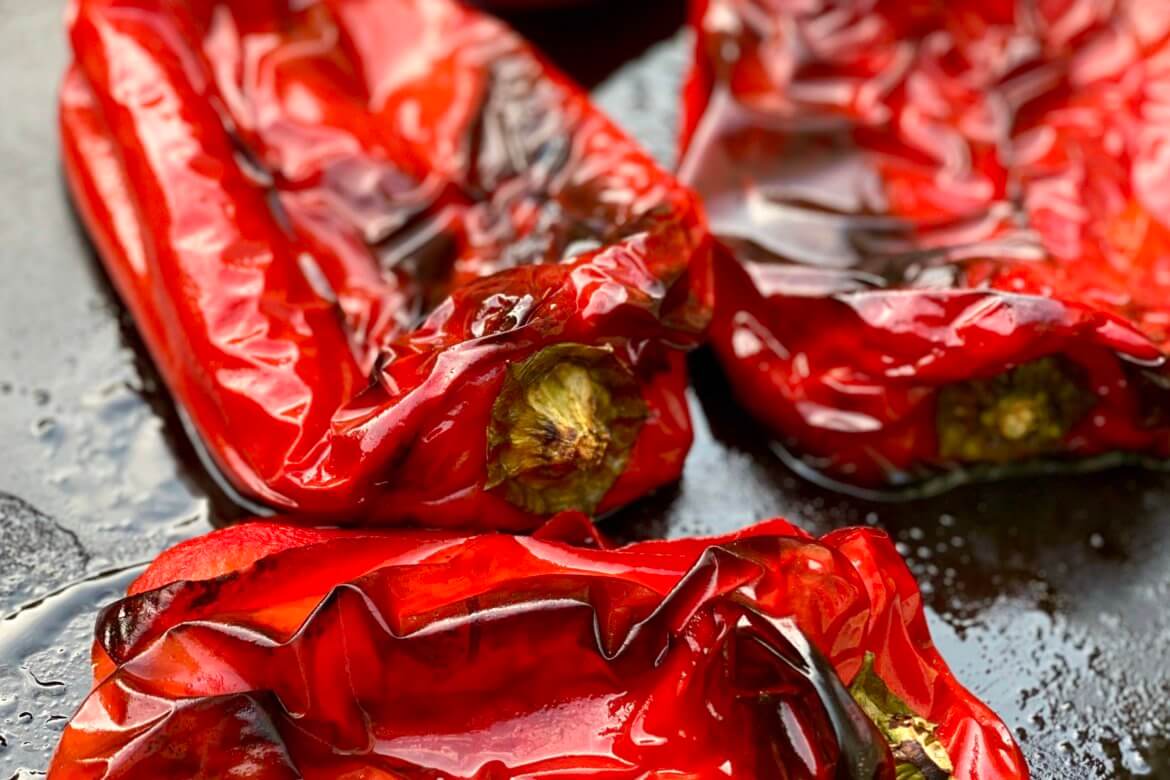 While it’s traditional to roast red bell peppers, any type of pepper can be prepared this way, including yellow, green, and even hot peppers like spicy jalapeños or milder poblanos and Anaheims.

Store-bought roasted red peppers offer welcome convenience, and I have taken that shortcut many times.

Doing it yourself, however, is incredibly easy and the reward for the short time investment is a sweeter, smokier, more robust overall flavor.

These colorful vegetables (did you know that peppers are technically a fruit?) also pack a nutrient punch. This is true for both mild and hot peppers.

Peppers are one of the richest sources of vitamins A and C. One cup of peppers provides more than 100% of your daily needs. Bell peppers are also a good source of fiber, folate, iron, and potassium.

“We eat with our eyes,” as the saying goes, and the bright colors afforded by peppers will enhance the visual appeal of so many recipes.

A variety of colors will deliver the biggest bang for your nutrient buck. So, while we usually think of roasting red bell peppers, feel free to use this method with any color you choose. And don’t hesitate to roast poblanos, Anaheims, and other spicier peppers as well. 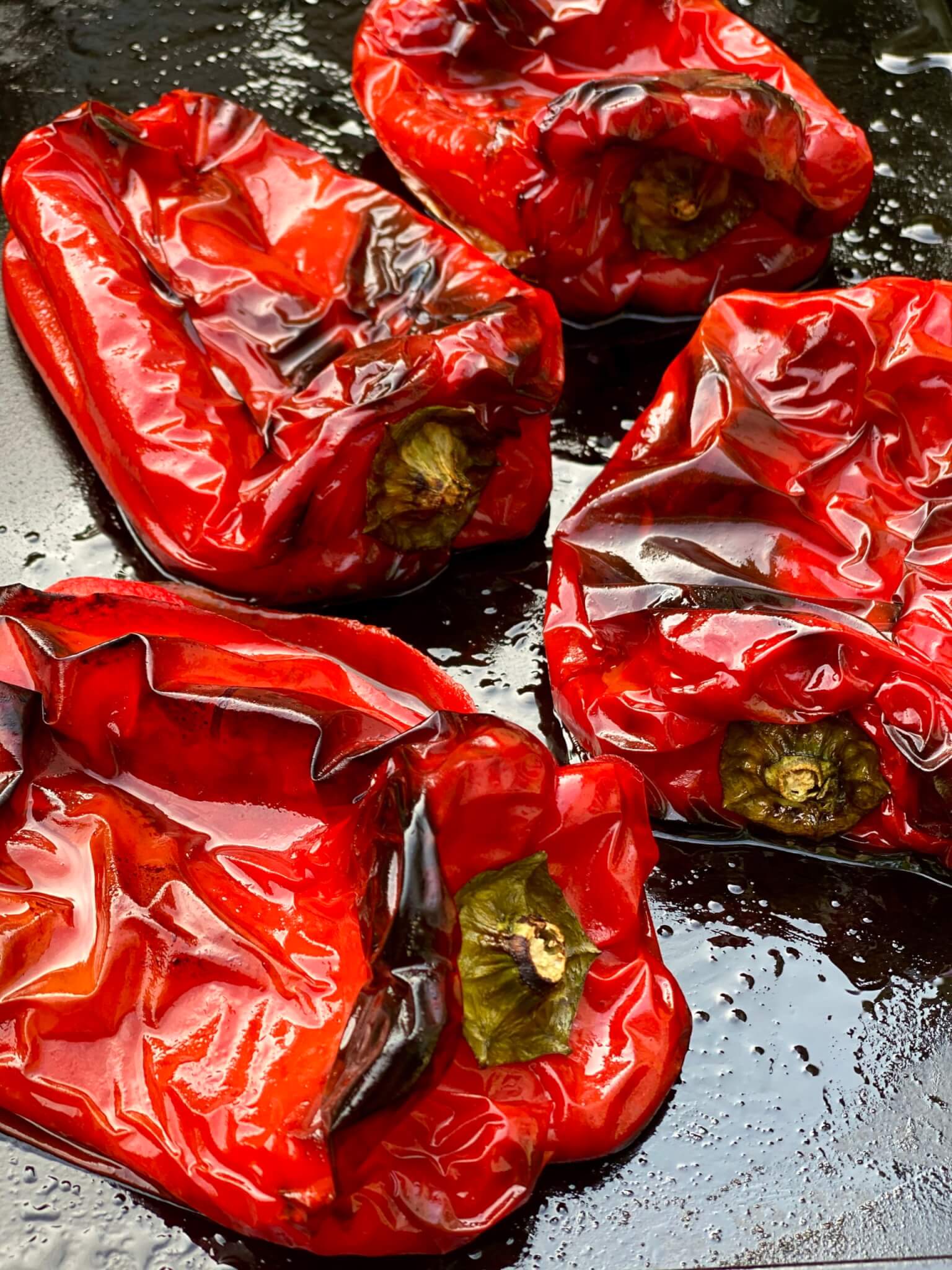 Whole peppers are roasted until they collapse into themselves, are charred all over, and their skin is wrinkled. At this point, allow them to cool for easier handling. 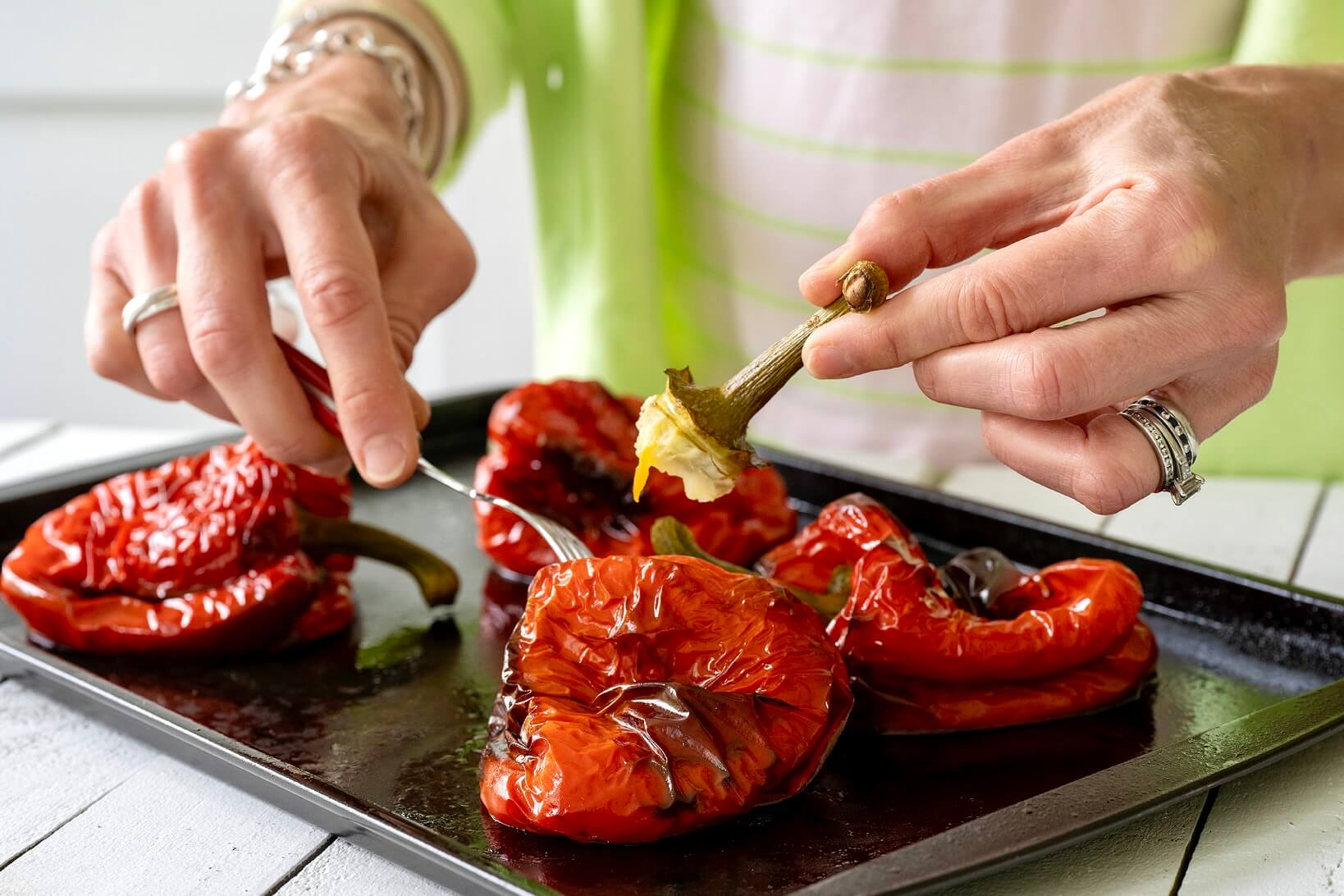 The stems will pull off easily. 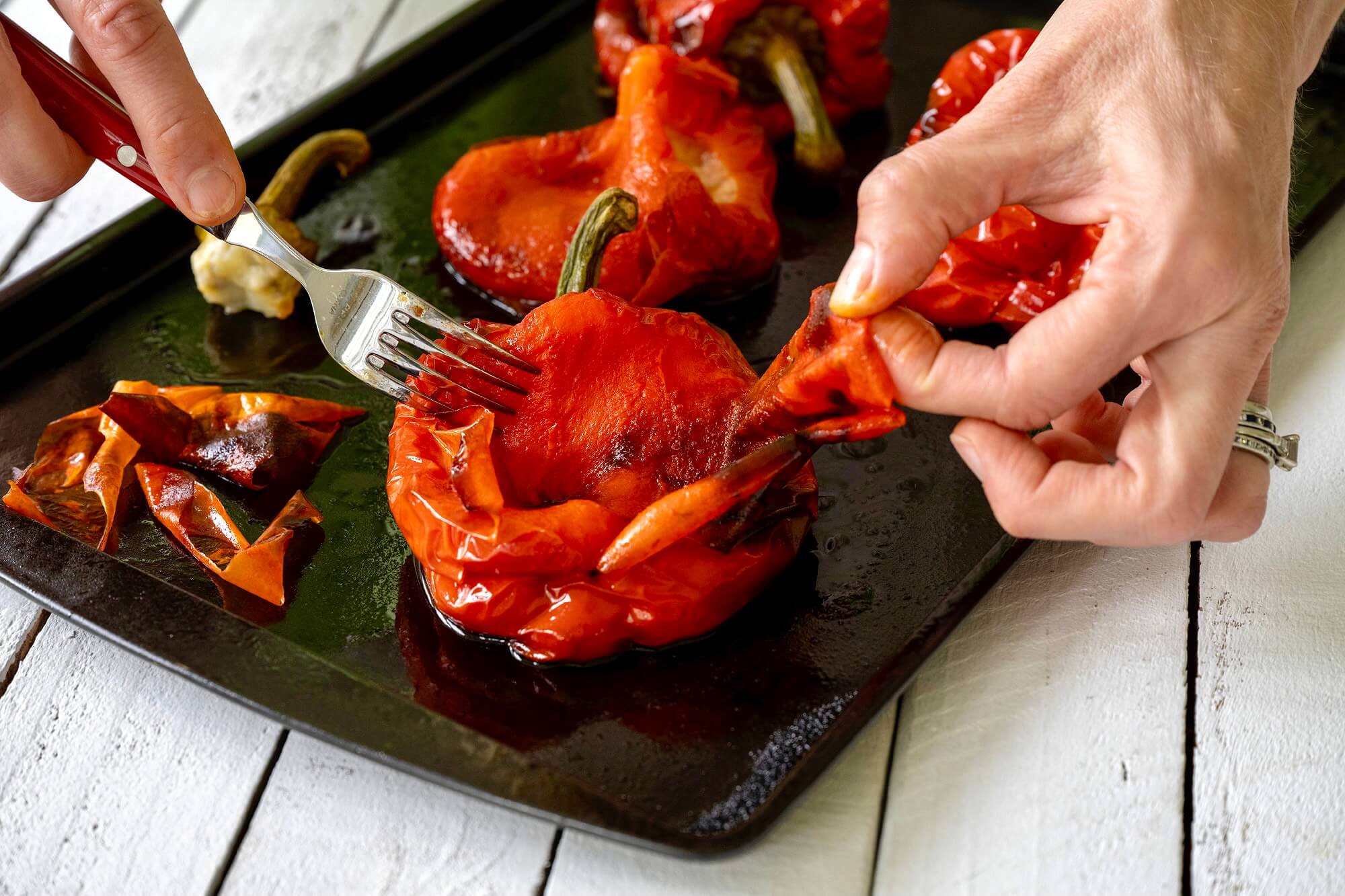 The skins will slip right off, too. 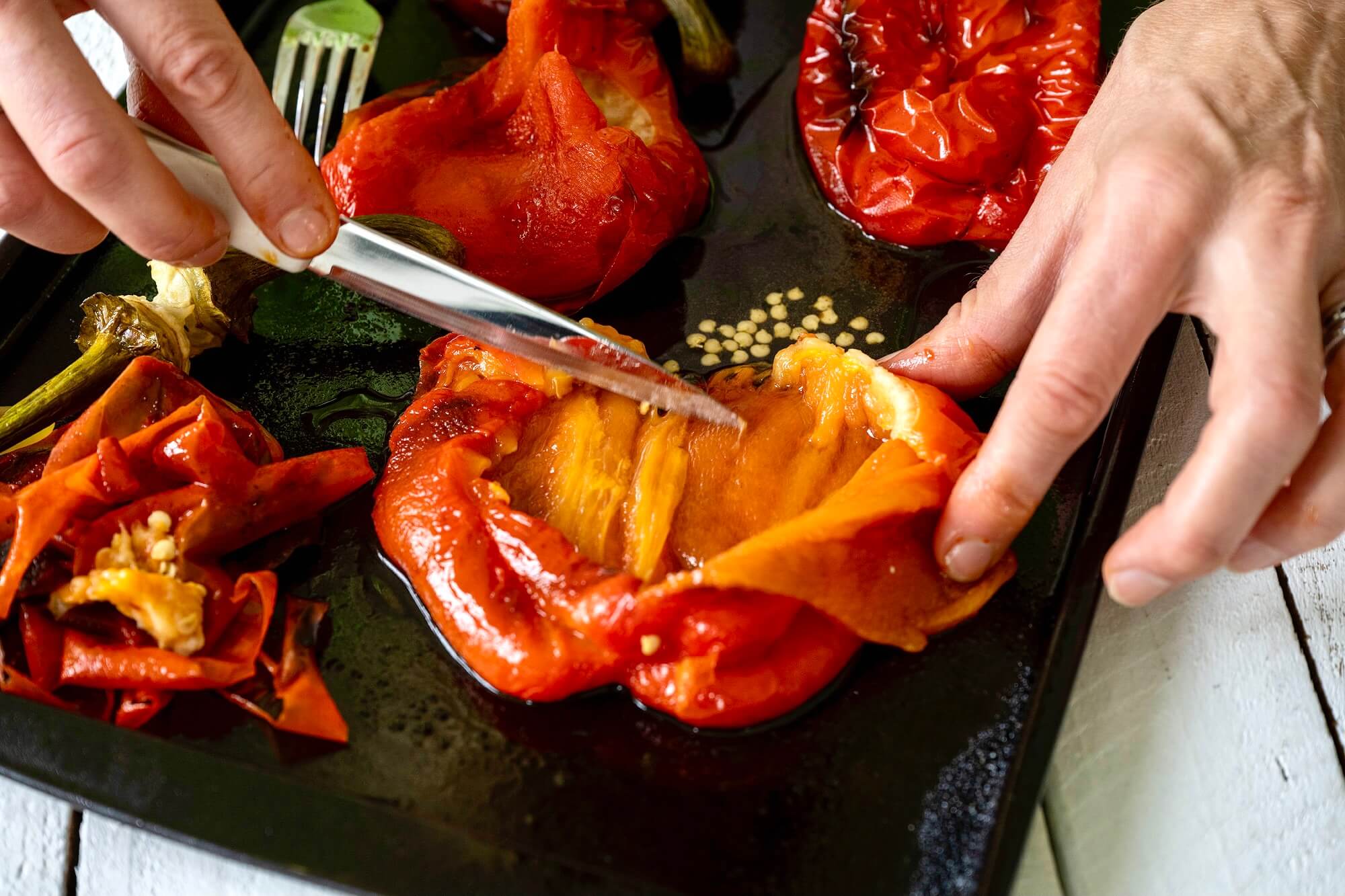 The peppers are then sliced open and the seeds are scraped away. Helpful hint: It may be tempting to rinse the peppers to more quickly remove the skin and seeds, but they will be more flavorful if you don’t. At this point, you may slice, chop, or leave them whole. See recipe instructions for short and long-term storage. 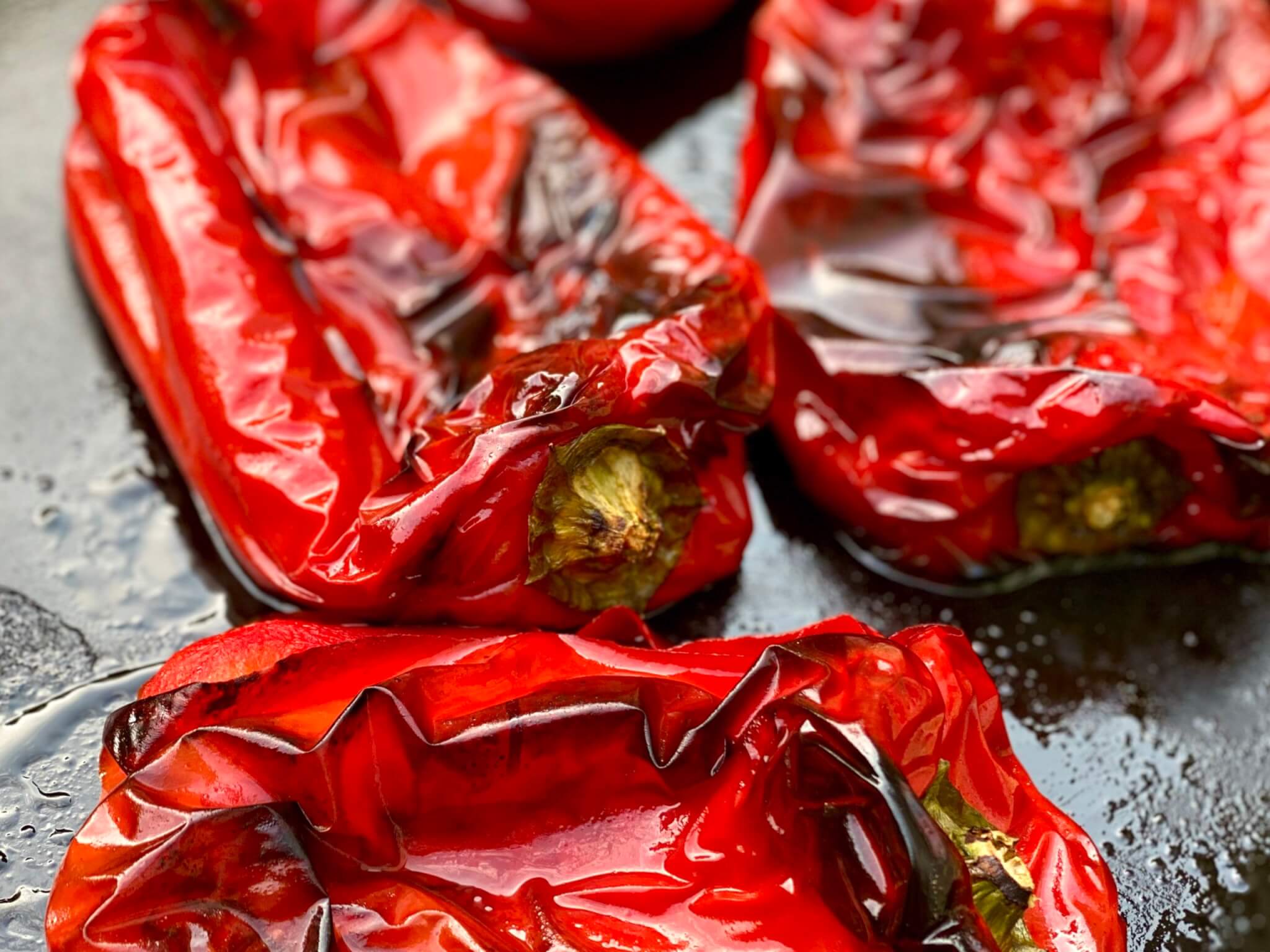 Wash the peppers and remove any stickers. Preheat the oven to 400˚F.

Place the peppers on a rimmed baking sheet and brush them all over with the olive oil. Alternatively, you can drizzle the oil over the peppers and then rub it all over with your fingers. You may season with salt and pepper, if desired. I often leave them plain and season along with the recipe in which they will be used.

Next, pull off the stems and skin and discard. Slice the pepper open and remove the seeds, discarding them too. Helpful hint: It may be tempting to rinse the peppers to more quickly remove the skin and seeds, but they will be more flavorful if you don’t.

Storage: The peppers may be used immediately or placed in a glass jar or other airtight container, where they will maintain freshness for 5-7 days. For longer storage, you may cover the peppers (whole or you may slice first) with extra virgin olive oil. Covered with oil, the peppers will keep for approximately two weeks. Plain peppers (no oil) may also be frozen in a single layer.

My recipe used to instruct placing the hot peppers in a brown paper bag or a bowl covered tightly with plastic wrap for 10-15 minutes. The idea is that the steamy environment makes the peppers easier to peel. I have found this step to be unnecessary so have updated the recipe to reflect that. 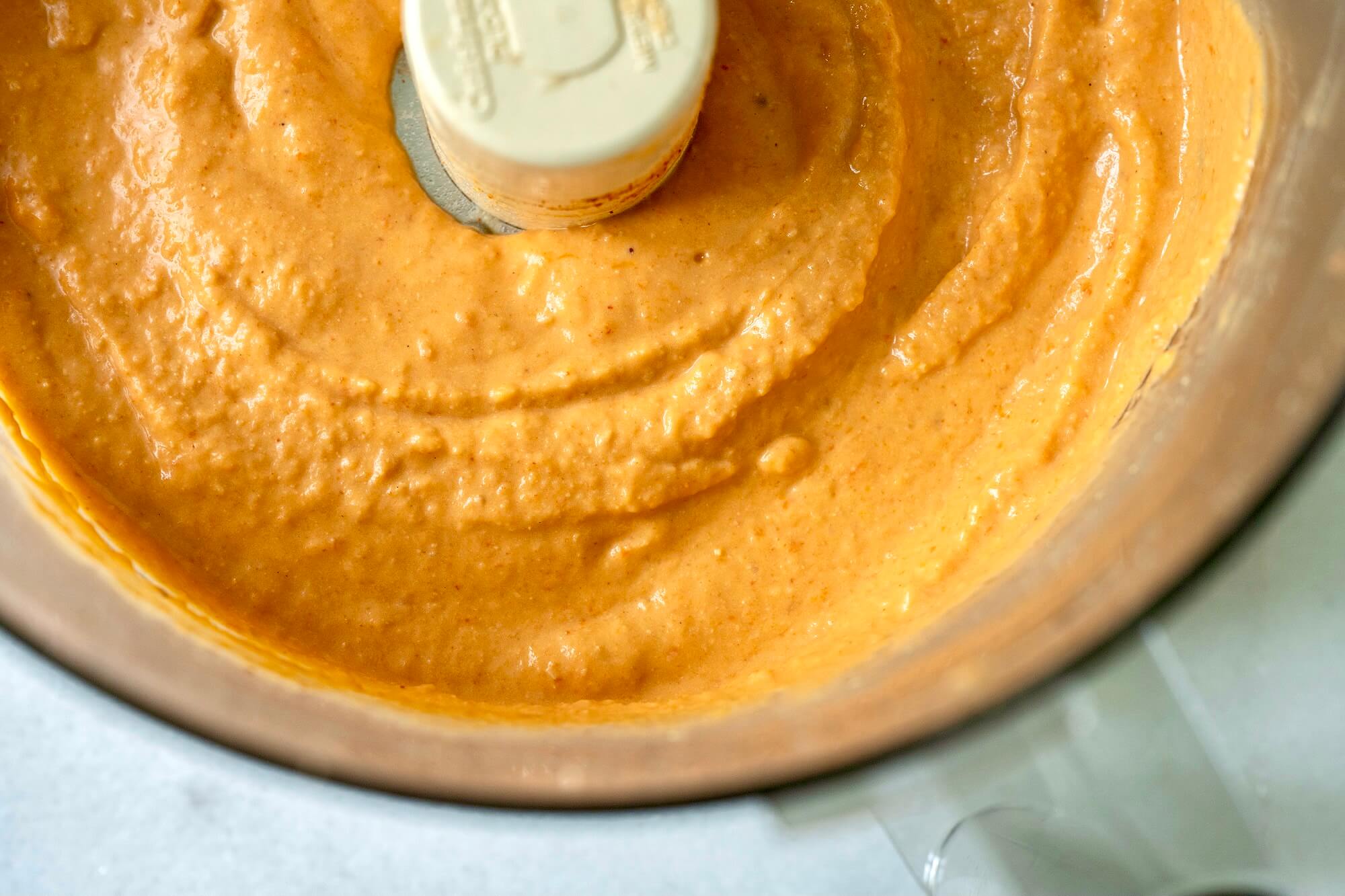 The vibrant red color of the peppers will create a gorgeous carrot orange hue in this recipe for Smoky Roasted Red Pepper Hummus–just one of many delicious ways to put roasted peppers to use!