How to Roast Spaghetti Squash 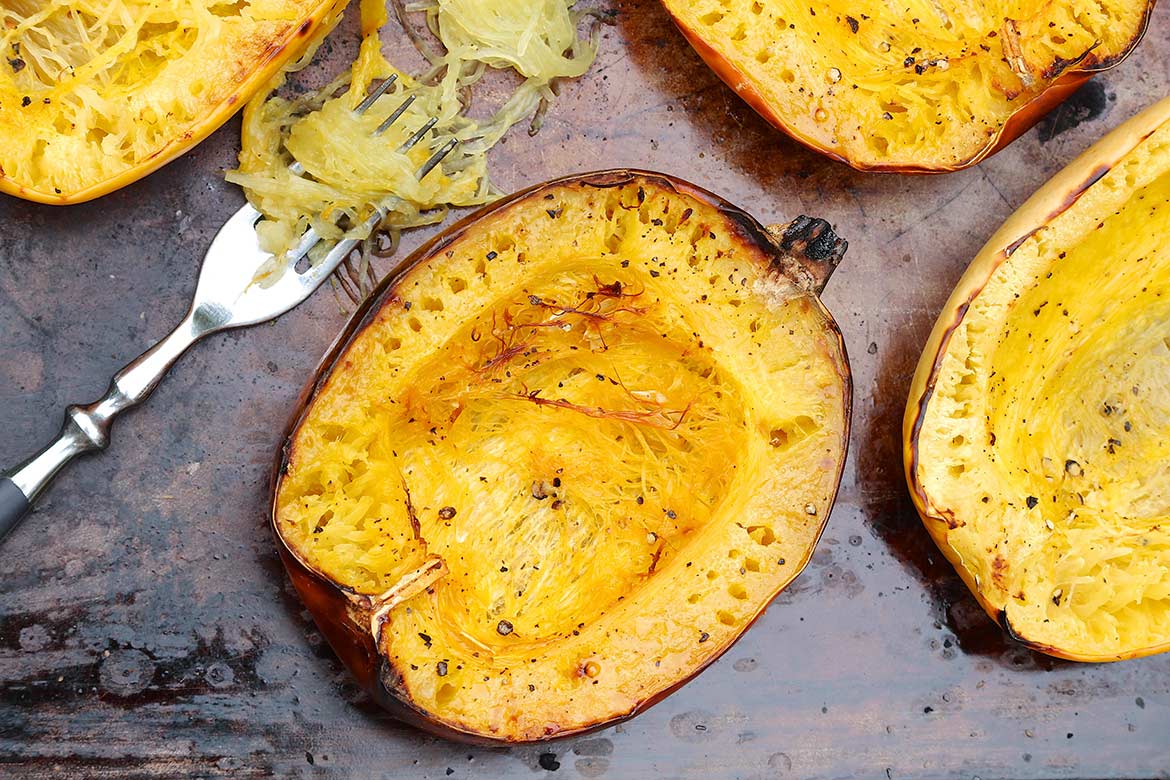 Scraping a fork across cooked spaghetti squash to magically produce “noodles” is really fun for kids–and kids at heart.

But what’s the best way to cook this hard-shelled winter vegetable? (From a botanical standpoint squash is technically a fruit because it contains the seeds of the plant. From a culinary perspective, however, squash is considered a veggie.)

I’ve talked to many adults who never tried spaghetti squash but were eventually wooed by its low carb appeal. My unscientific research revealed that most were surprised by how much they enjoyed it, even though it’s not a carbon copy of traditional pasta.

Cooked spaghetti squash is an excellent base for pasta sauces and a variety of proteins and delicious when simply tossed with a little butter or olive oil, sautéed garlic, salt and pepper.

One of my favorite ways to enjoy it, however, is to use the shell as a serving bowl and combine the wholesome “noodles” with familiar flavors to make a family-friendly meal.

I’ve made these Spaghetti Squash Pizza Boats (pictured below recipe) for my family, young nieces, and a classroom full of middle schoolers to rave reviews. That alone is reason to try!

My sister-in-law recently reported that the meal is now on the regular rotation, and my nieces enjoy helping to make the pizza boats as much as they enjoy eating them.

I’ve also made a version of this Leftover Spaghetti Pizza, with plain spaghetti squash noodles in place of the leftover sauced spaghetti. The variation would better compared to a frittata, but whatever you call it, it’s easy, delicious, and healthy. 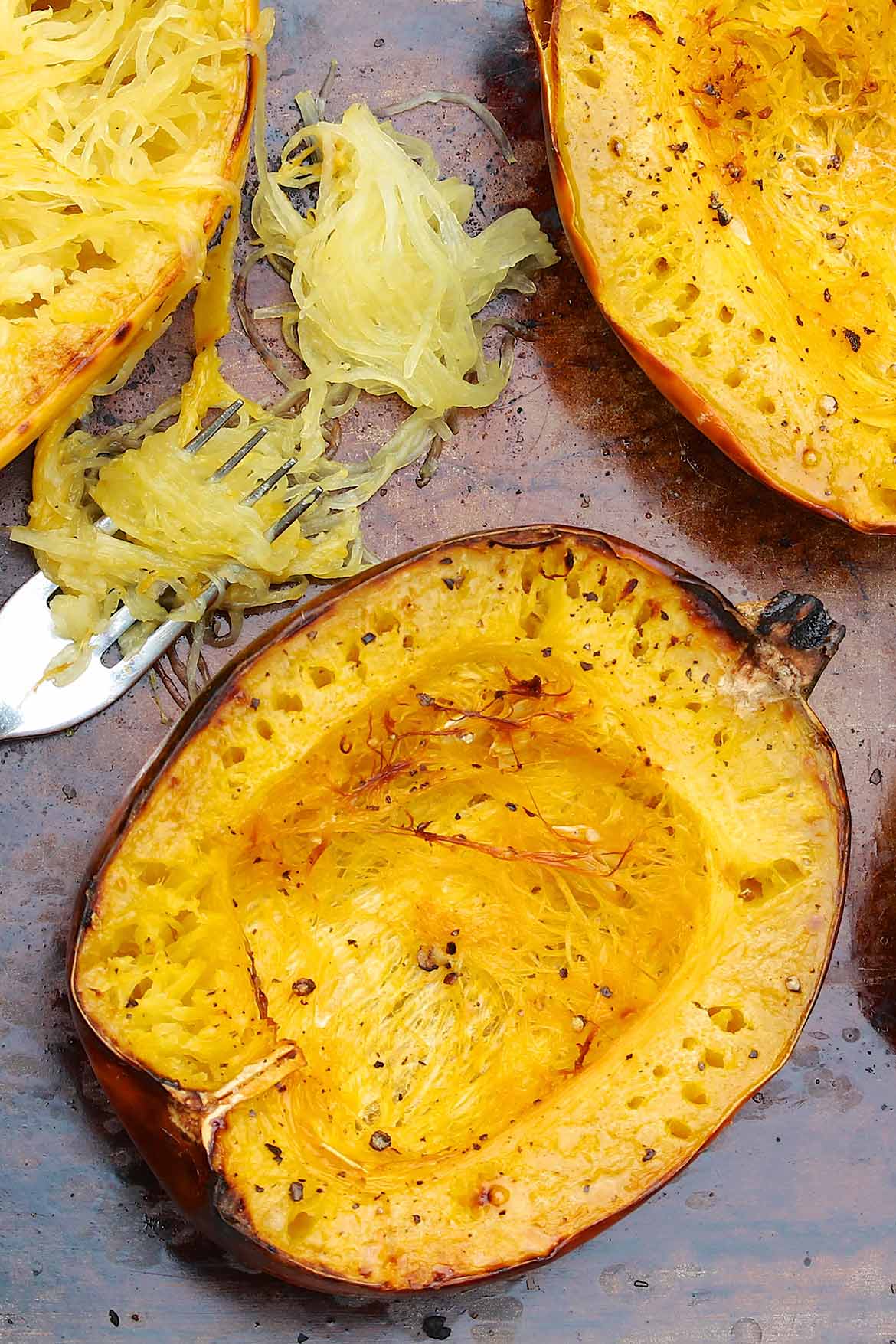 When considering other ways to enjoy, think to some of your favorite meals and combine elements of them with the spaghetti squash. Beyond the pizza boat idea, for example, you can make enchilada, taco, or chicken alfredo boats, to name a few.  These mashups lend good flavor and lots of kid (and adult!) appeal.

So here’s the lowdown… 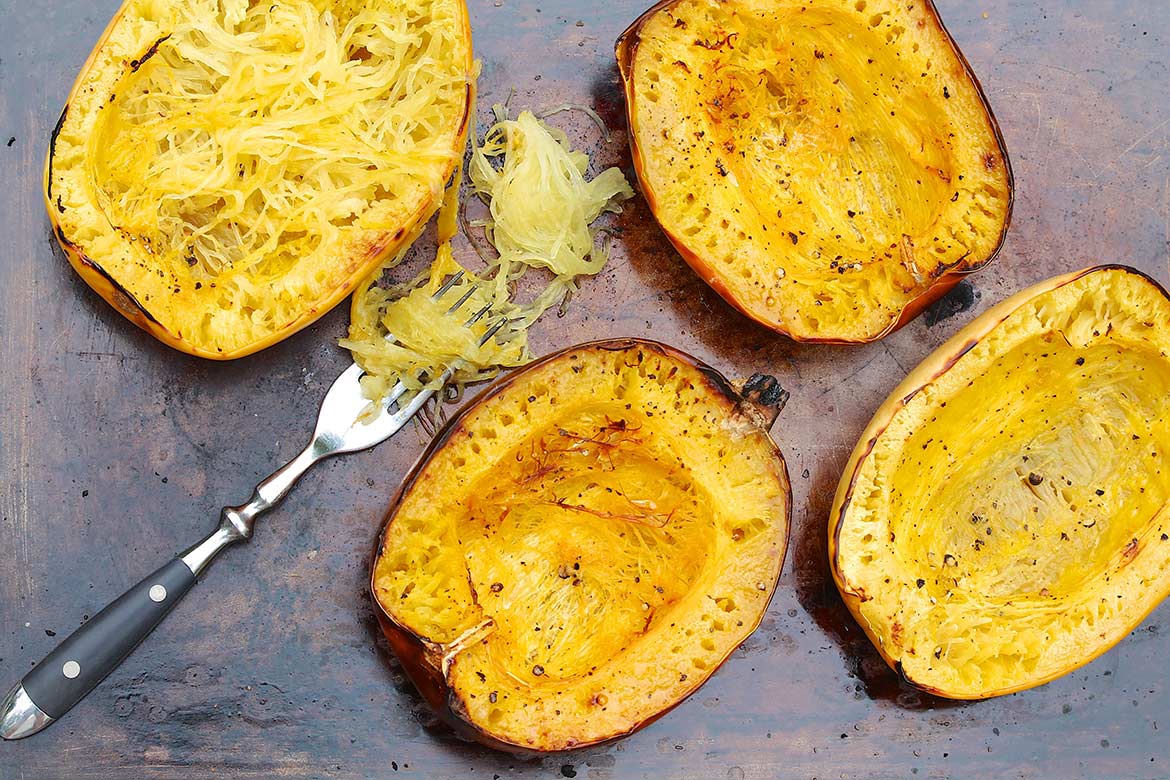 How to Roast Spaghetti Squash
Yield: 2-4 servings
The amount of "noodles" will vary based on size of squash. For reference, a 4-pound spaghetti squash will yield approximately 5 cups of cooked squash.
Print
Ingredients
Directions

Preheat the oven to 400℉, and lightly grease spray a baking sheet. You may line it with parchment paper or greased foil for easy cleanup.

Using a sharp knife, very carefully cut the spaghetti squash in half lengthwise to form two equal size “boats”. (Tip: I find it helpful to microwave the squash for about 3 minutes before cutting to soften it. Pierce it once or twice along the line where you will cut it later so the steam can escape.)

Scrape out the seeds with a spoon, and place cut-side up on the prepared baking sheet. Mist or brush with olive oil (I usually drizzle a teaspoon of oil around the edges and inside each half, and then rub it around with my fingers). Season the flesh well with salt and pepper.

Flip the squash and bake cut-side down for 25-35 minutes or until the edges of the squash are lightly golden and the squash meets little resistance when pierced with a knife. The flesh should easily pull away from the shell but have a hint of firmness to it. (Exact time will depend on oven, size of squash, and if you microwaved to soften. Larger squash that have not been softened may take 40-50 minutes.)

Using a fork, scrape the inside of the squash until the flesh is spaghetti-like. You may transfer the strands to a bowl or enjoy straight from the shell.

Prep-ahead tip: Spaghetti squash may be baked in advance. Either allow the cooked halves to sit on the counter for up to 2 hours or cool, cover, and refrigerate for a day or two.

If you are stuffing the shells as part of another recipe (like Spaghetti Squash Pizza Boats), leave about ¼-inch of the squash in tact around the border so the shell doesn’t collapse. 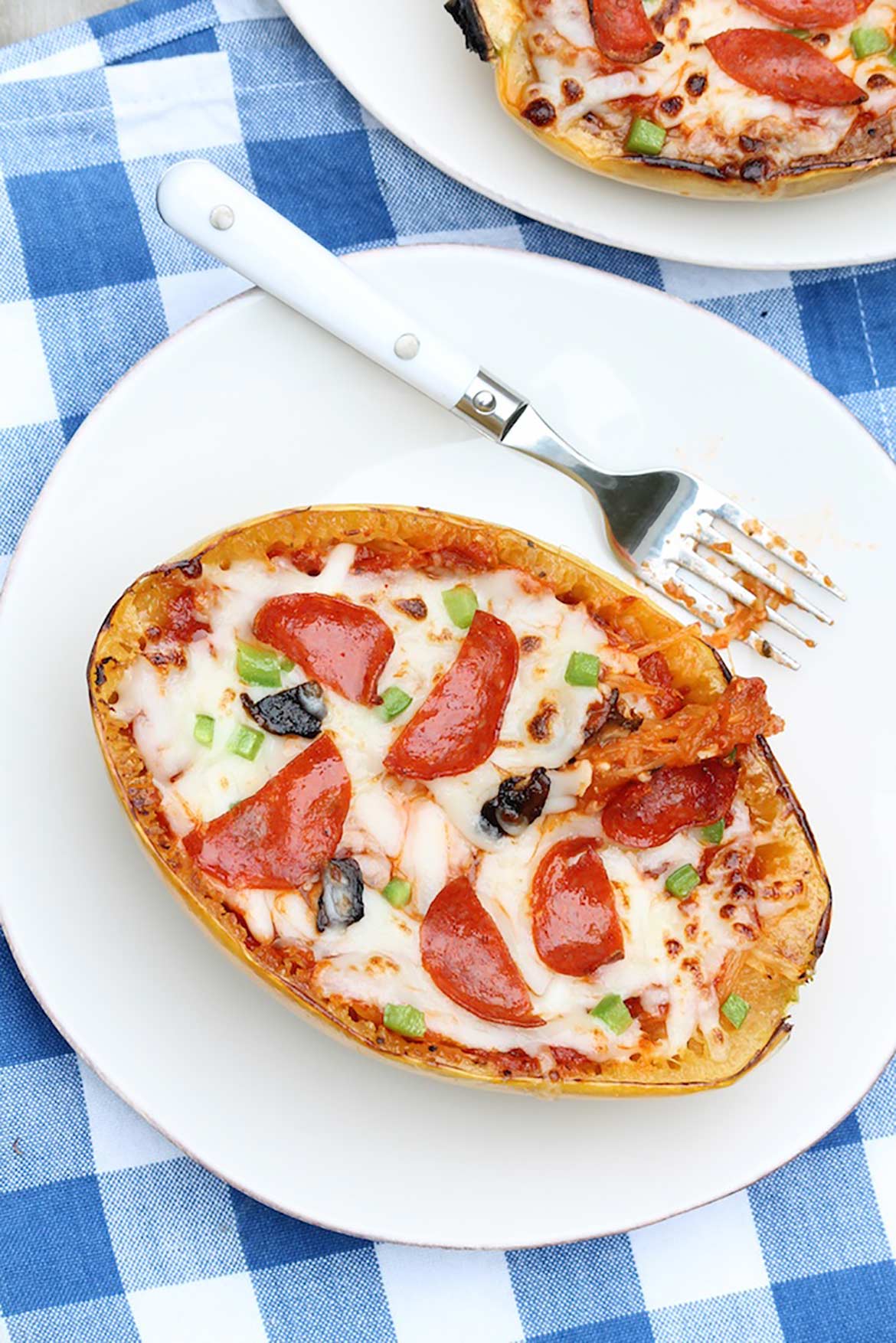 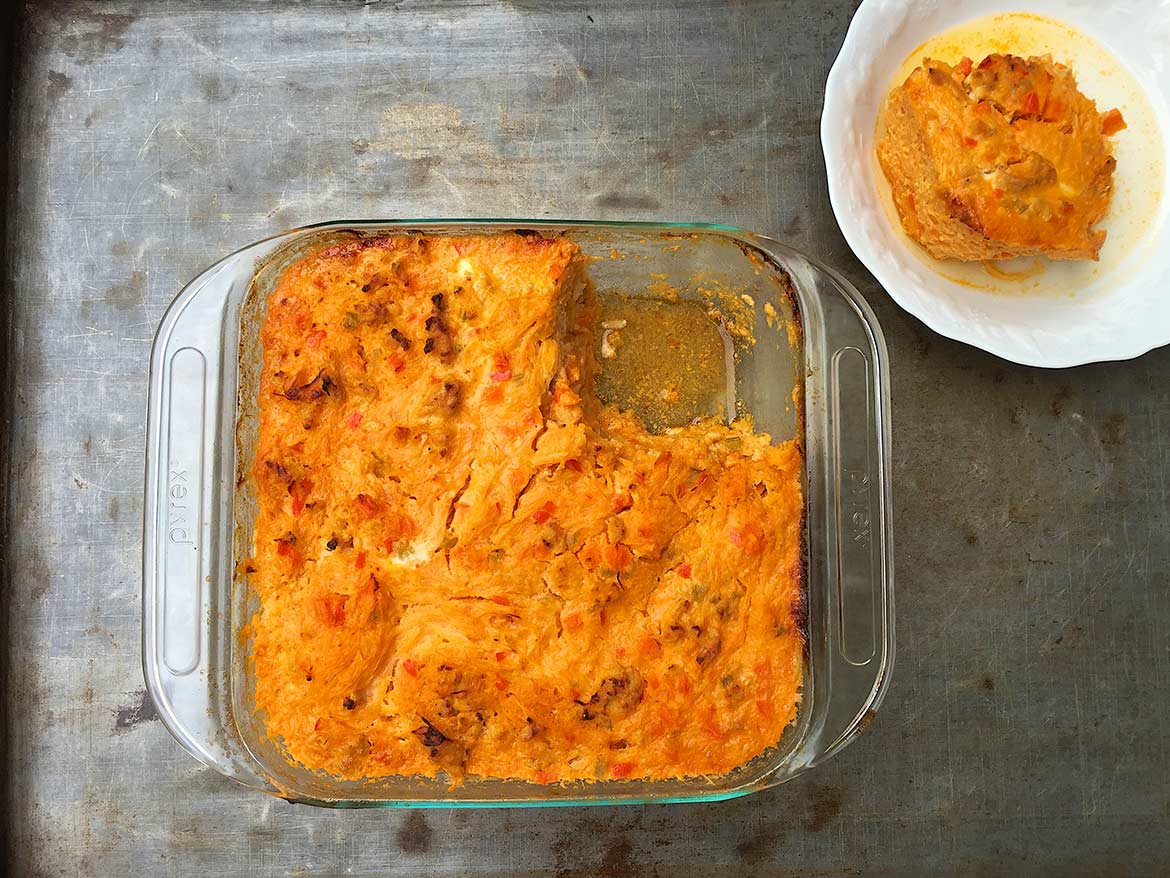 Buffalo Chicken Casserole from Juli Bauer’s Paleo Cookbook is a recipe I originally made for a friend who was struggling through Whole30. She went on to make this spaghetti squash-based dish several times a week throughout the program and says it’s still a favorite. I love it, too, but add blue cheese–which is delicious although not Whole30 approved!