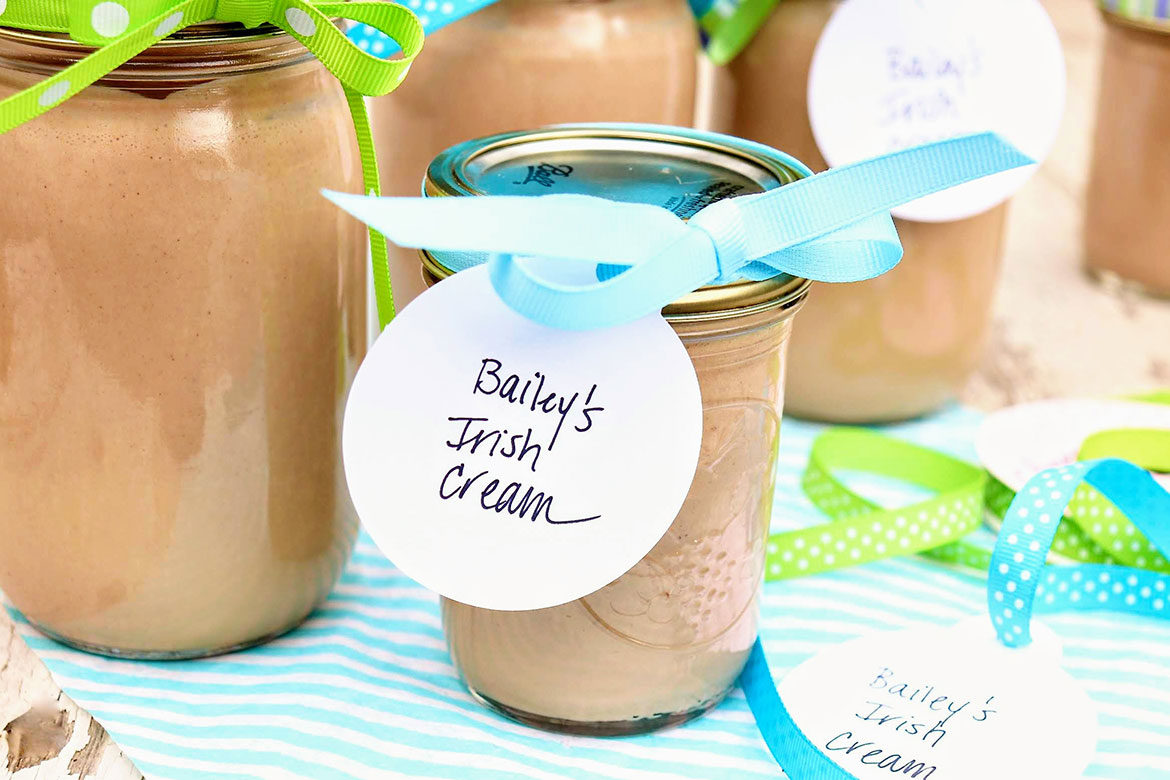 Quick and easy to make at home and every bit as delicious as the store-bought bottle－less expensive, too. Irish cream is delightful in coffee, on the rocks, or in a variety of baked goods. It’s a novel treat for holiday and hostess gifts and perfect for St. Patrick’s Day!

A reader from France kindly shared her favorite holiday recipe with me at this time last year. I had shared a recipe for eggnog quick bread, and she was wondering if there was a good substitute. She said eggnog is not commercially available in France, but she just happened to have some Homemade Irish cream on hand. (For the record, I have not tried Irish cream in place of eggnog in the quick bread, but it might work!)

Fondly recalling the days when I enjoyed the occasional glass of Bailey’s Irish cream, I made it soon after and was impressed. It tasted just like the real thing－dare I say better? Fresher. I made subsequent batches to share with friends and give as hostess gifts, all to rave reviews.

Sweet, creamy and not overpowering, Bailey’s Irish cream was the first alcoholic beverage I tasted and enjoyed. I was living in Spain at the time, and it was often served on the rocks or stirred into a strong cup of coffee. It’s lusciously creamy and lightly nutty with hints of chocolate and vanilla.

Generally, I’m no fan of whiskey, but when paired with the following ingredients, it provides just the right amount of kick. (Of course, those who prefer a more prominent flavor may adjust accordingly.)

If you’re a fan of Irish cream or are simply looking for a little something different to give friends who may enjoy it this holiday season, I highly recommend this easy-to-make recipe. With many thanks to Kim!

How to enjoy Irish cream:

When Irish cream is served as a nightcap, a small glass served on the rocks satisfies like a good dessert. I most often enjoy it instead of regular cream in my coffee. Irish cream turns a basic cup of coffee into something worthy of a fancy café, albeit with a bit of alcohol.

How much alcohol will I be drinking? Irish whisky makes up roughly one-third of the mixture. If using as a creamer, 1 to 1½ ounces of Irish cream is the standard addition to 8 ounces of coffee. In this case, the actual amount of alcohol consumed would be no more than about a half ounce. 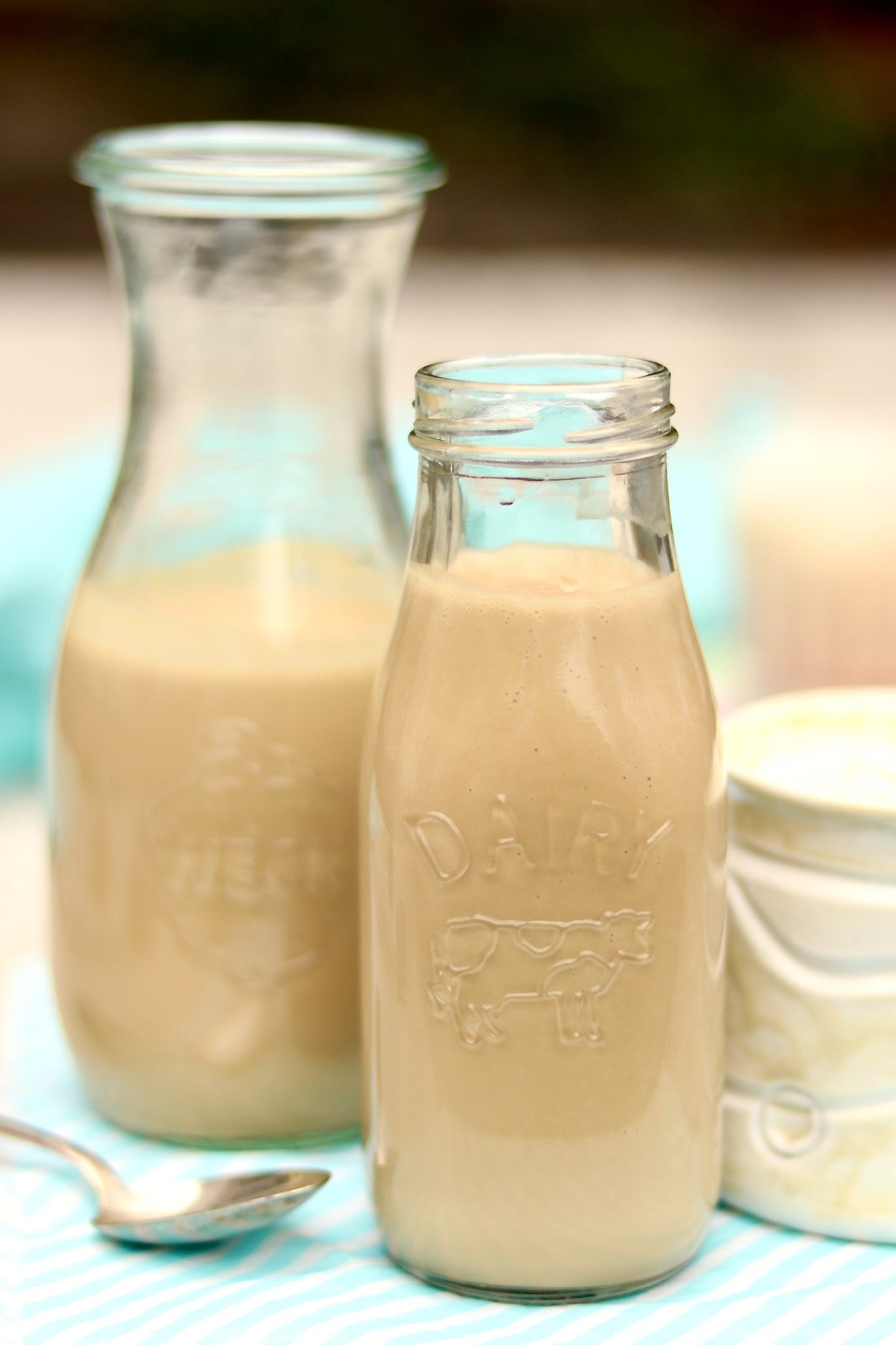 You can store the finished drink in Mason jars or whatever glass jars you have on hand.

According to the National Institutes of Health’s Celiac Disease Awareness Campaign, distilled alcohol is inherently gluten-free. This includes gin, vodka, scotch whisky and rye whiskey. Although whiskeys are derived from wheat, barley or rye (which all contain gluten), the distilling process is said to remove the gluten proteins. HOWEVER, there are exceptions and some celiacs have claimed to experience reactions from drinking these liquors. If there’s a need, I recommend checking to see if the brand you will be using is considered gluten-free and proceeding with caution. 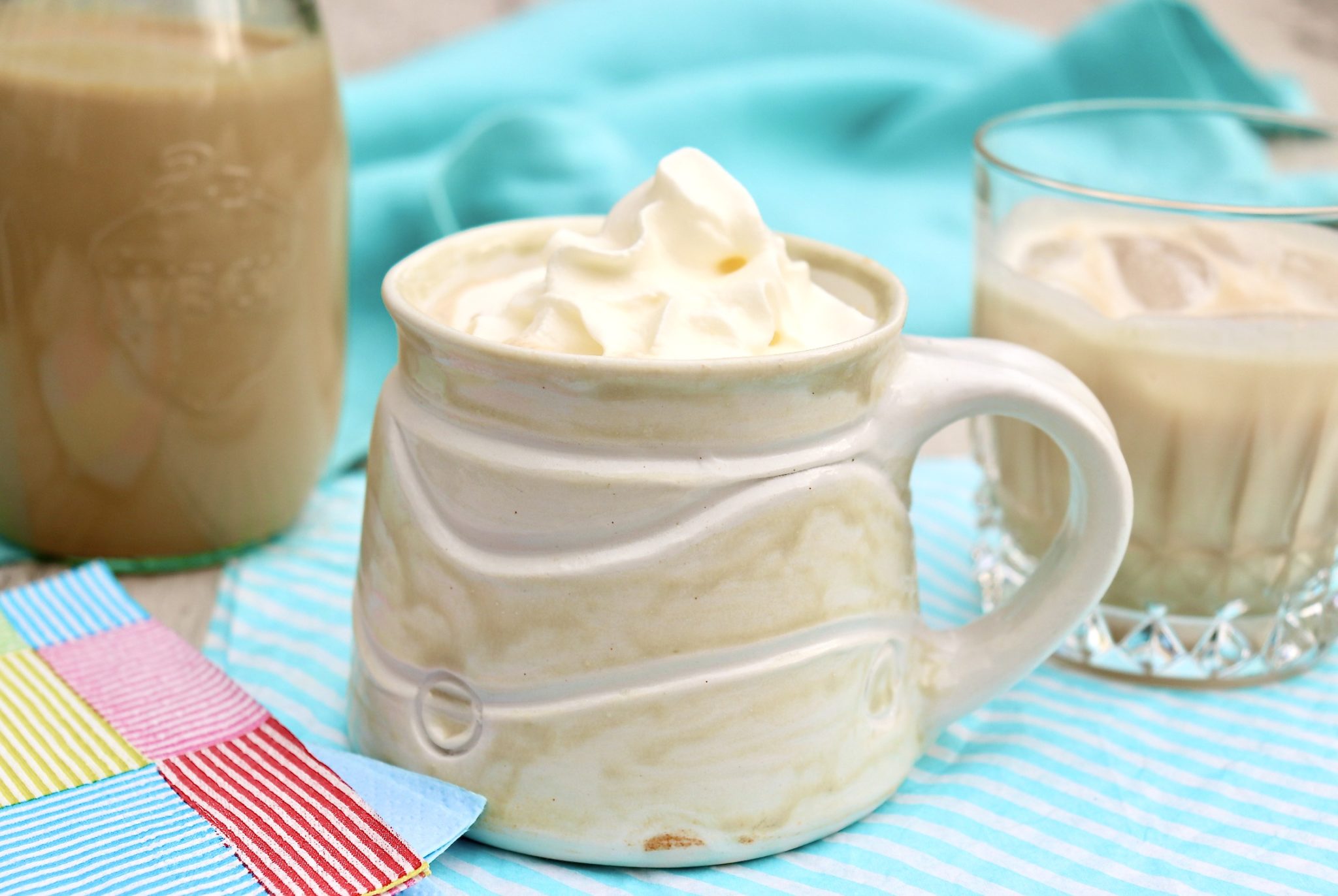 Serve homemade Bailey’s Irish cream on the rocks or stir it into coffee, hot cocoa, French toast or chocolate cake batter and more. For gift giving last year, I paired a jar of Irish cream with a jar of spiced pecans and a ticket to a cool raffle that a local organization was running as a fundraiser. 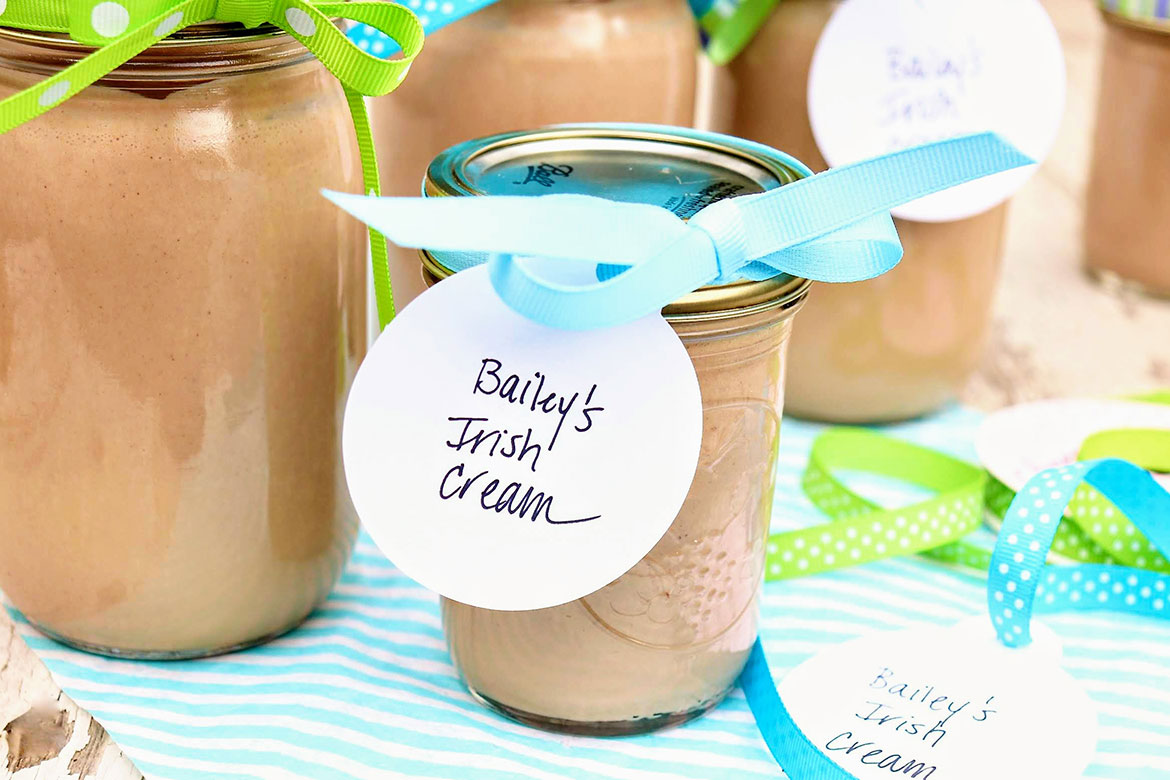 *Kim’s original recipe mentions that you could substitute half and half for the heavy cream for a lighter version. To more closely replicate the original, I have always used heavy cream.
**
Kim has also used rum instead of whiskey. I have not tried that variation, and though it would change the flavor profile, those who enjoy rum may like to try.
***Kim sometimes uses 1 tablespoon of instant coffee instead of the espresso powder. Just make sure it’s the kind that dissolves in water, not coffee grounds. I keep a small jar of King Arthur Flour’s espresso powder on hand, but other options can generally be found in the coffee/tea aisle of the grocery store. To avoid buying a whole jar if you don’t think you’ll use it for anything else, you could purchase one of those little packets of Starbucks Via instant coffee.
***Caramel sauce may be used in place of the chocolate sauce. I prefer chocolate sauce by a small margin, and like to use my homemade salted hot fudge sauce. When using salted chocolate sauce, I omit the pinch of salt.