Fight off fatigue, achiness and that telltale scratchy throat with this soul-warming soup. The flexible recipe is also a great way to detox from the holidays － and to clean out your fridge! Easy to make vegan, gluten-, soy- and nut-free based on the chosen cream/milk option.

You know the feeling. Fatigue, achiness and that telltale scratchy throat. You don’t feel awful but have a looming sense of what’s in store.

When someone in my family complains of these symptoms, I simmer a pot of ginger tea and encourage an early bedtime – rest and hydration have long been touted for their healing effects. Sometimes, however, I take things a step further.

Chock full of wholesome ingredients, the following soup can also be served as a feel-good detox after the indulgences of the season. It’s fairly filling as is, but the optional addition of cooked beans or a grain of choice will satisfy hunger for a longer period of time thanks to the added protein.

As a side note, we often think of grains as heavy on carbs, but they can be a good source of protein, too (as well as fiber and a variety of vitamins, minerals and anti-oxidants). Grains that are especially protein-rich include amaranth, quinoa, barley and wild rice.

But let’s face it. Soup the color of the Grinch who stole Christmas can be a little off-putting to some. 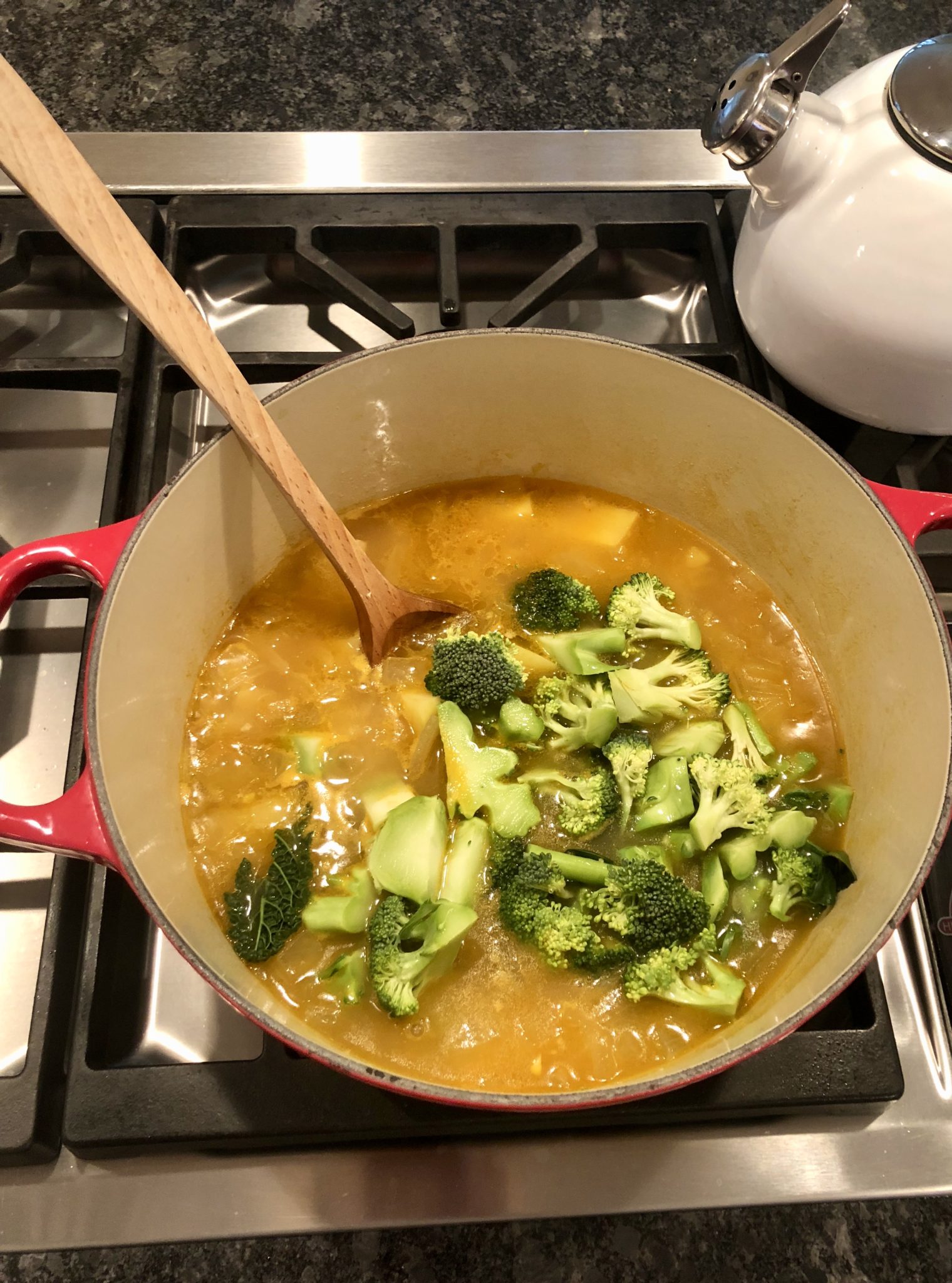 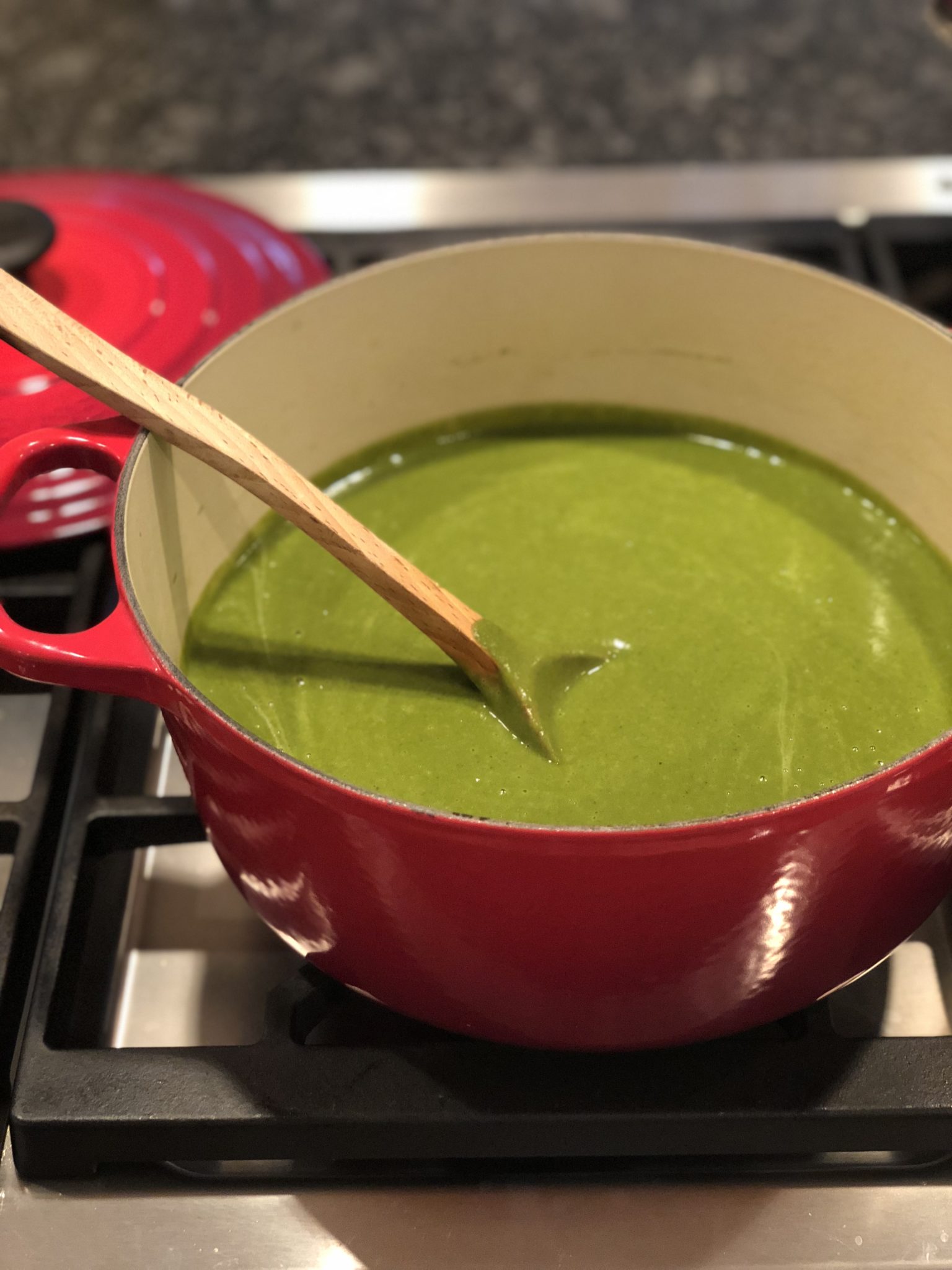 So before sharing what I consider to be a healing elixir, I sought out some trusted opinions. I started by texting a photo of this vibrant soup to several friends and family members, asking what thoughts it brought to mind.

Responses like “interesting,” “scary,” “beautiful” and “I love it!” reaffirmed my suspicion that not everyone would dig into this soup willingly.

A follow-up offer to provide samples, however, yielded several eager takers. My brother’s family provided the most entertaining, if not the most informative, feedback.

My savvy sister-in-law presented the soup as Aunt Ann’s Grinch soup, and my younger niece promptly commented that it smelled good but looked gross – and then both girls proceeded to clean their bowls.

My sister-in-law further reported that she and my brother thought the soup had great flavor and everyone would happily eat it again.

As for my own family, one son fully embraces this colorful elixir while the other claims it tastes better than it looks. While my husband admits to not being a big fan of pureed soups in general, he likes the color and flavor of this one and particularly enjoys it when I add some cooked rice to his bowl.

I’ve also discovered that the less enthusiastic among us more fully embrace this soup when not feeling well. Perhaps it’s the belief that a generous helping is akin to medicine in a bowl. 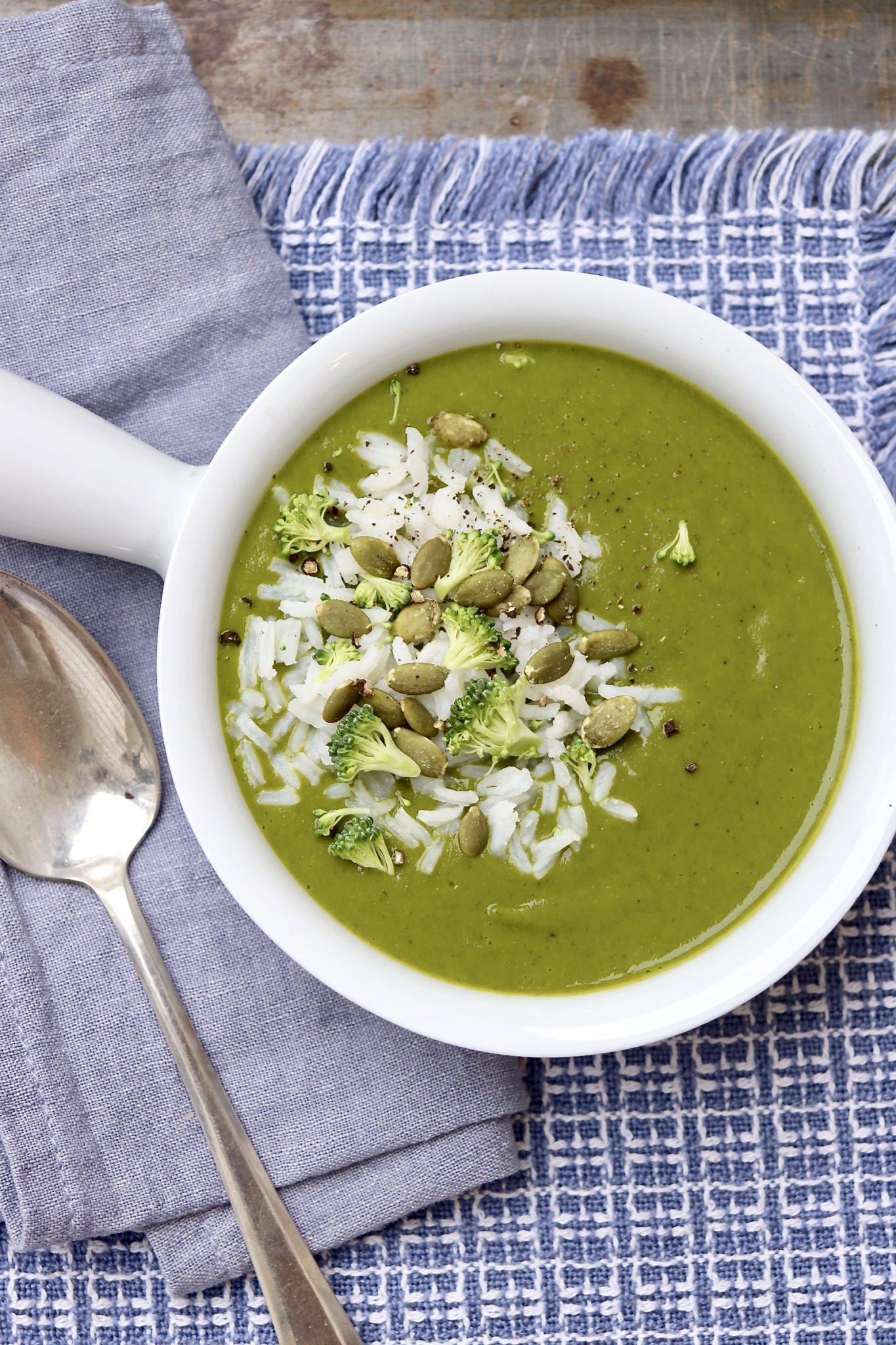 The greens can be varied, and instead of the more traditional heavy cream or half and half, Gena employs homemade cashew cream, which has become an increasingly popular vegan substitute for cream in both savory and sweet applications. Most recently, I used full fat canned coconut milk with good results.

(For those interested in trying cashew cream, Gena offers sweet and savory modifications in this recipe.) 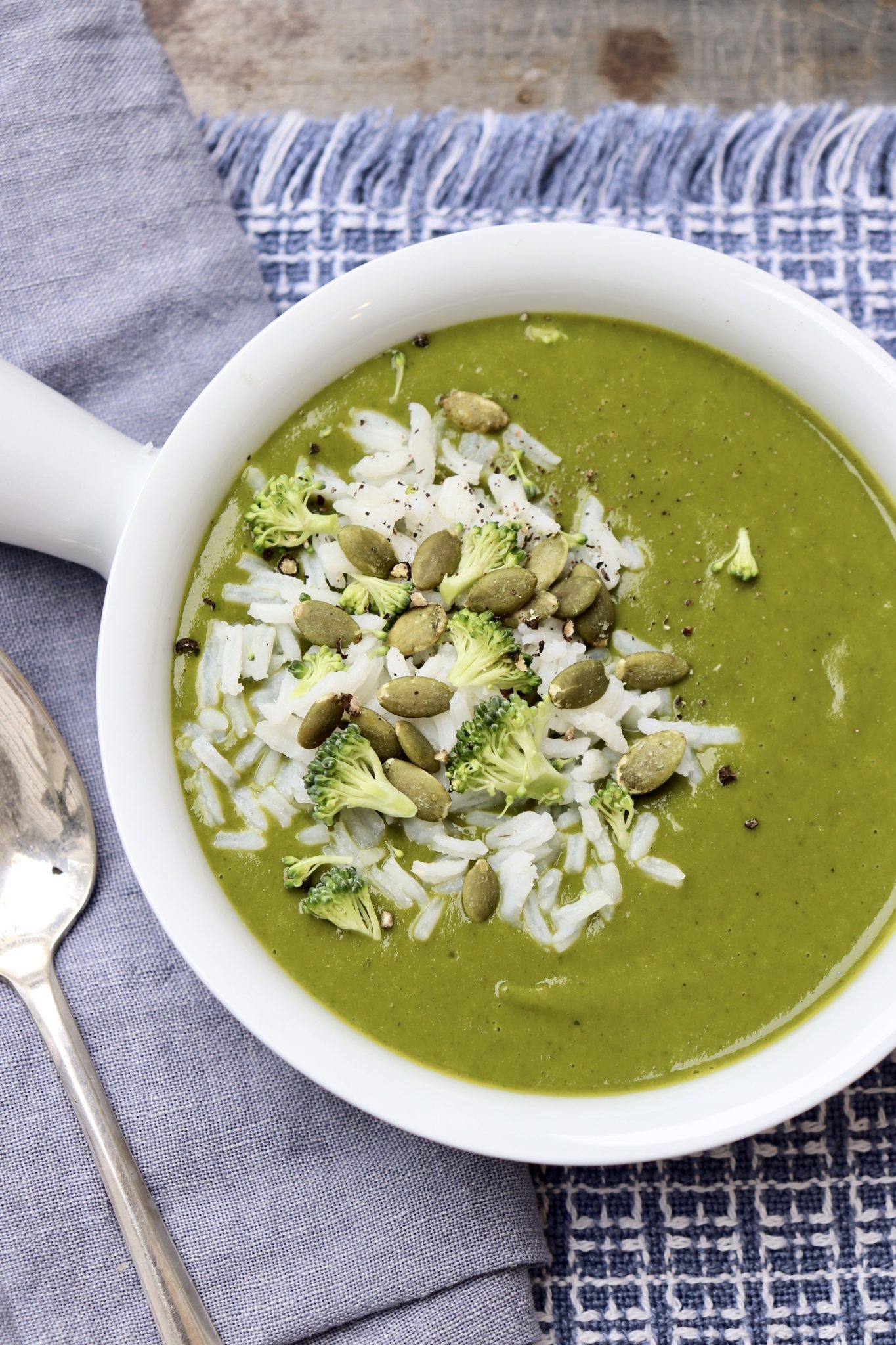 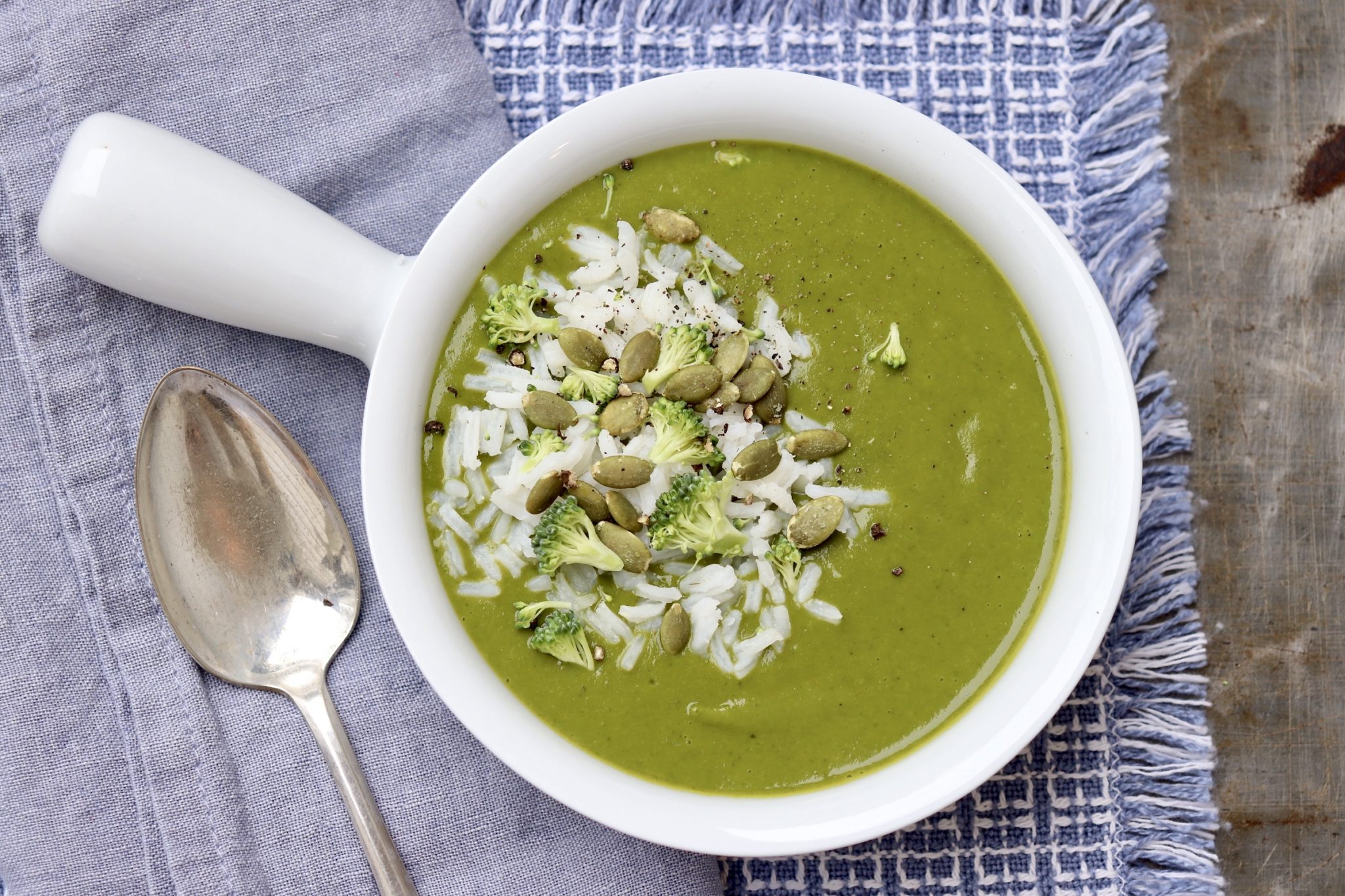 Immunity Boosting Green Soup
Yield: approximately 10 cups (6-8 servings)
Whether employed as a natural antidote to sore throats and colds, a post-holiday detox or an effective way to clean out your crisper drawer, this flavorful soup can be vegan, gluten-, soy- and nut-free based on the chosen cream/milk option.
Print
Ingredients
Instructions

Heat the olive oil in a large stock or soup pot over medium heat. Add the onion. Sauté onion for 5 minutes, or until it’s clear and soft. Add the garlic and ginger and cook for another minute, or until the garlic is fragrant.

Transfer the soup to a blender in batches to puree thoroughly. (Take caution, venting the cap on the lid and covering with a tea towel to avoid a buildup of steam and hot splatters.) Return the soup to the pot and stir in the cream or milk and black pepper to taste. Add more salt, as needed, and serve with toppings of choice.

The soup will keep in an airtight container for up to 3 days and can be frozen for 2-3 weeks.

Sufficient seasoning really makes a difference with this vegetable-rich soup, heightening the underlining flavor of the broth. The use of potato creates a velvety texture and added thickness. I haven’t tried this, but for those who avoid potatoes, you could sub a can of drained white beans or experiment with a similar weight in cauliflower.