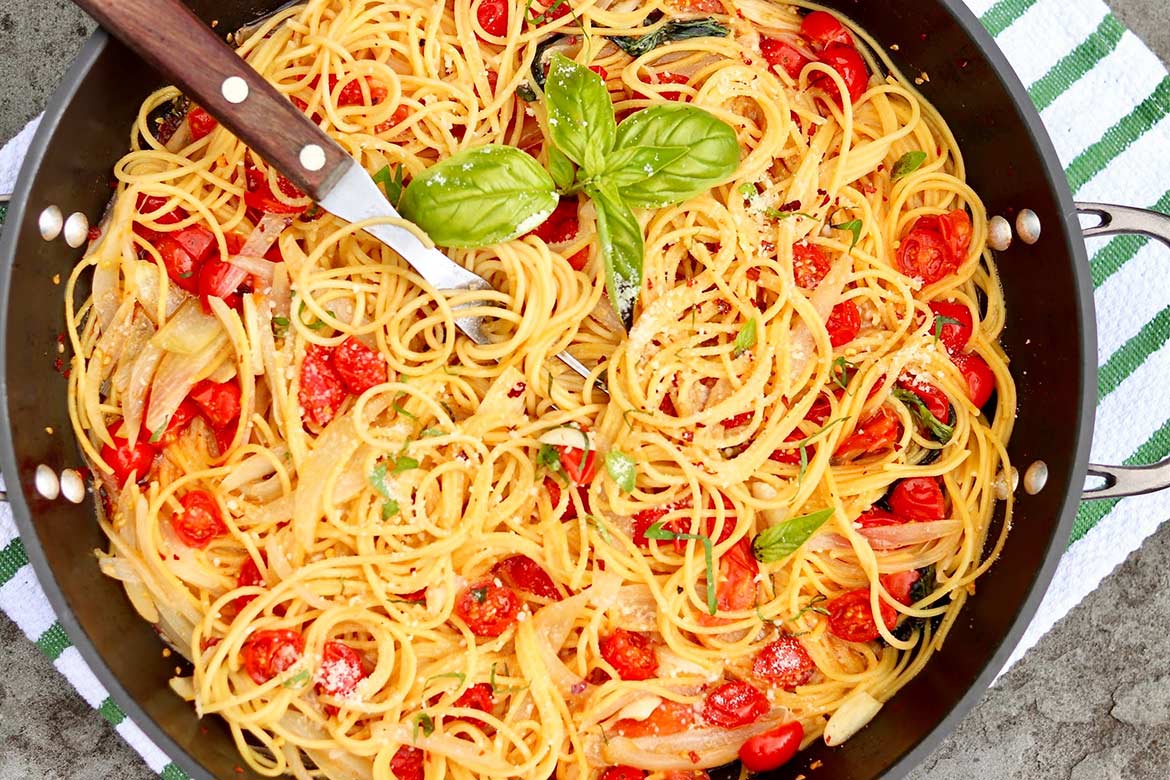 This all-in-one meal is a versatile weeknight godsend! Once the water boils, the cooking time is a quick 9 minutes. (And there’s a spot-on gluten-free option for those who need it!)

Have you ever tried Martha Stewart’s one-pan pasta recipe? The all-in-one meal is a gift on a busy weeknight, for sure.

Though I’d heard about this recipe many times over the years, I never tried it until I was challenged by Food 52, a popular online community of cooks and their test-kitchen-approved recipes, to create a riff on the iconic dish.

Naturally, I had to acquaint myself with the original if I planned to create a worthy twist.

As I read the comments provided by those who had success with Martha’s recipe－and the occasional cooks who didn’t－I felt compelled to troubleshoot and provide a little extra information if possible.

My regular readers know that I have a way of providing tips, choices and helpful hints aimed at recipe success. And after making this popular one-pan meal several times, I discovered that a few extra details were absolutely worthy of mentioning.

At first glance, the recipe seems like it shouldn’t work: place all of the ingredients, including the pasta, into a pan, and then pour a whole lot of water over top. Bring to a boil, simmer away and PRESTO! Dinner is ready.

Too good to be true, right?

That said, paying close attention to a few details is critical to recipe success. Sticking with the specified pan diameter, for example, is important to ensure the right amount of water is absorbed by the pasta while the remaining evaporates over time.

Stirring is necessary to prevent sticking and promote even cooking－but constant stirring can lead to gummy noodles.

Other details, however, can be altered and allow for easy customization of this quick-to-prep-and-cook dish. For example, short tubular or spiral pasta works beautifully for example. (I actually think it’s easier to stir.)

And though cooking all of the ingredients at once (as pictured below) yields a lovely end result, taking a few extra minutes, if time allows, to sauté the onions and garlic before adding everything else will elevate the dish a notch. 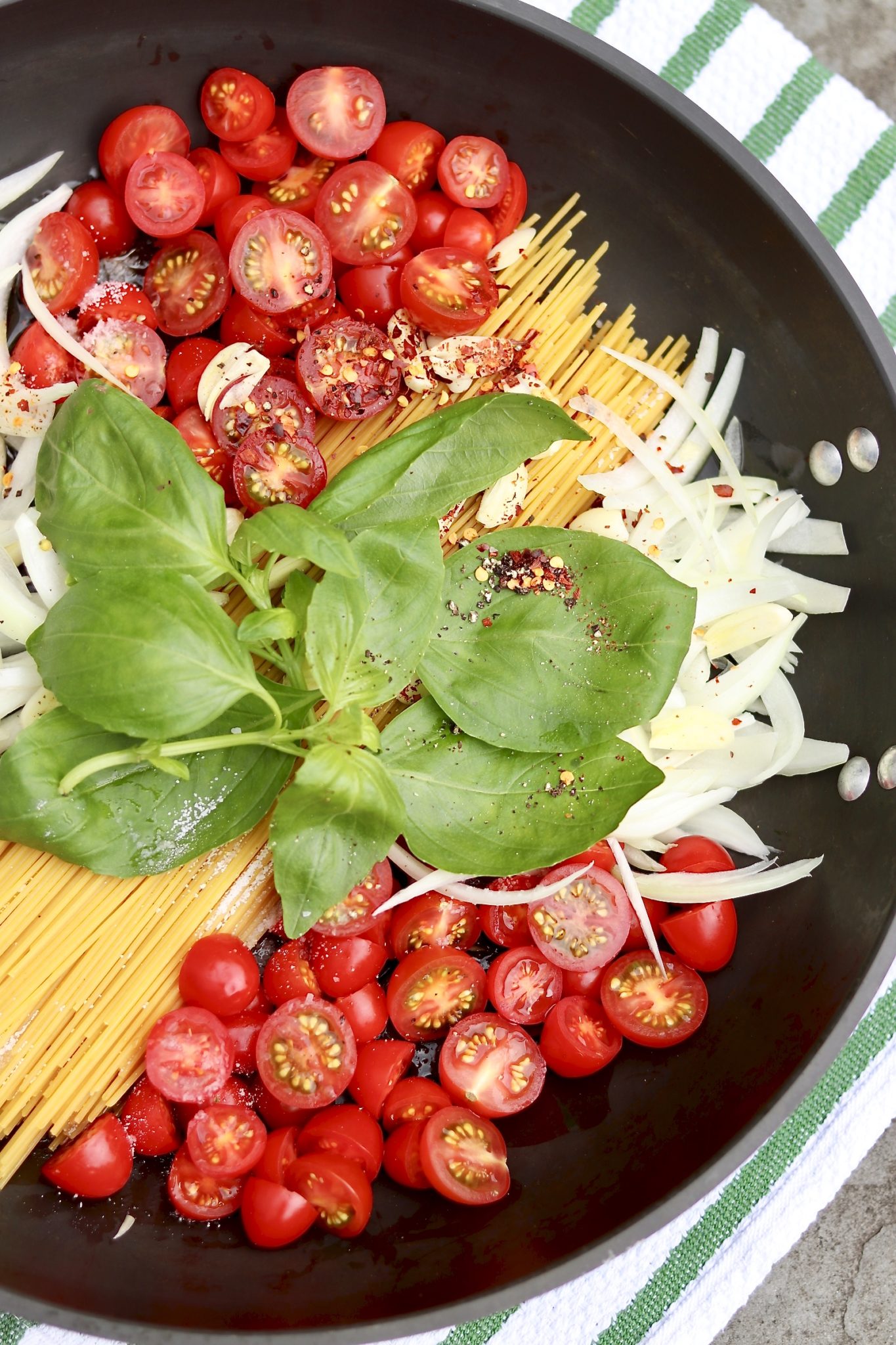 All the ingredients can be added to the pan and cooked at once. The resulting “sauce” is slightly creamy from the pasta starch, the onions become soft and the pasta al dente. See recipe for added flavor option provided by sautéing onions and garlic first as well as multiple ways to customize the recipe. 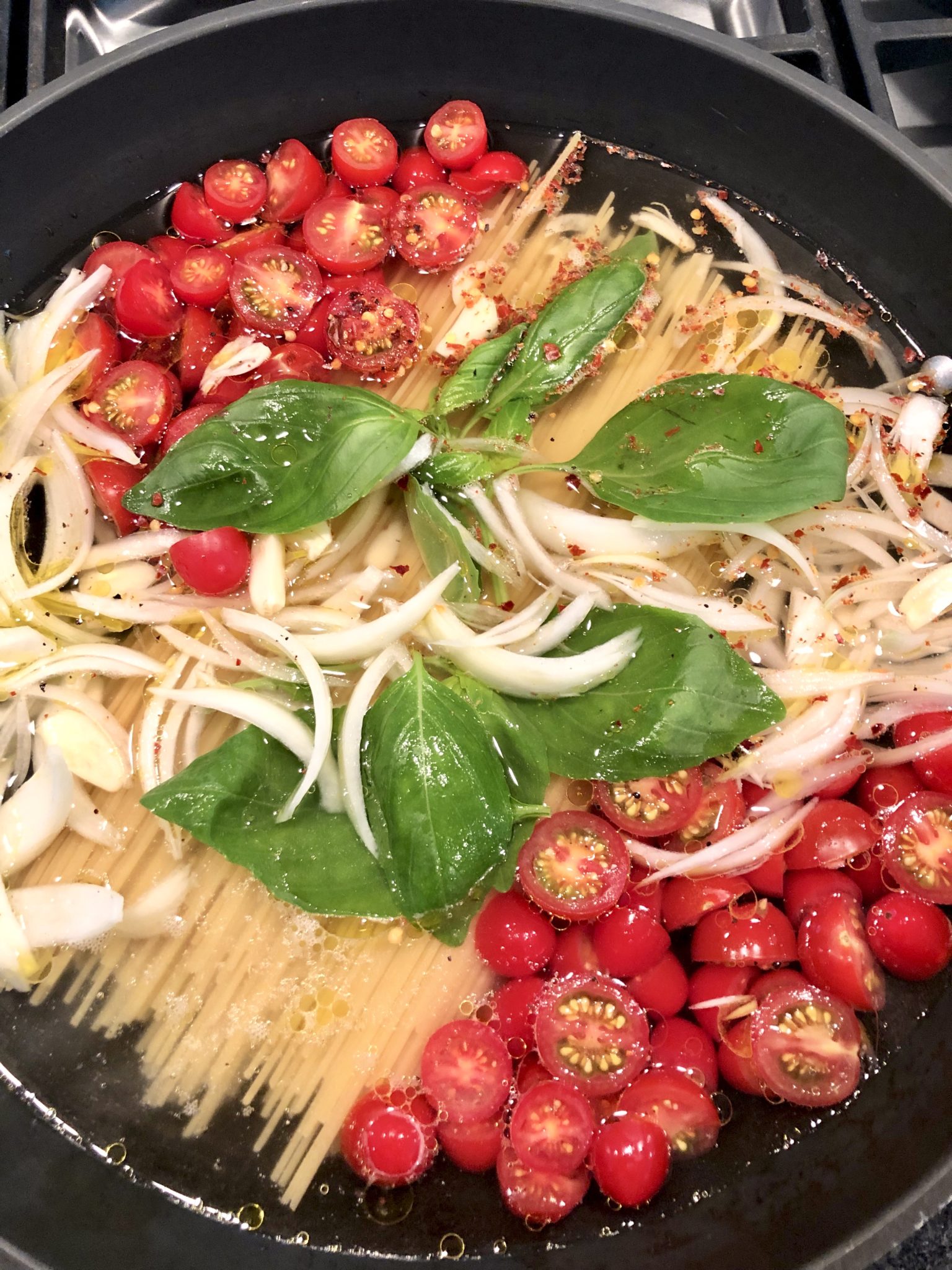 I’ve included a list of easy riffs below the basic recipe as well as a photo and link to the Thai variation I created for Food52. Of note, many commenters claimed that this recipe simply doesn’t work with gluten-free noodles. But after several rounds of testing (and my family willingly consuming a meal of slightly gummy rice noodles), I discovered a spot-on gluten-free adaptation for those who may need it.

Happily, this convenient meal can be enjoyed with seasonal vegetables and herbs but works well with grocery store staples all year round. 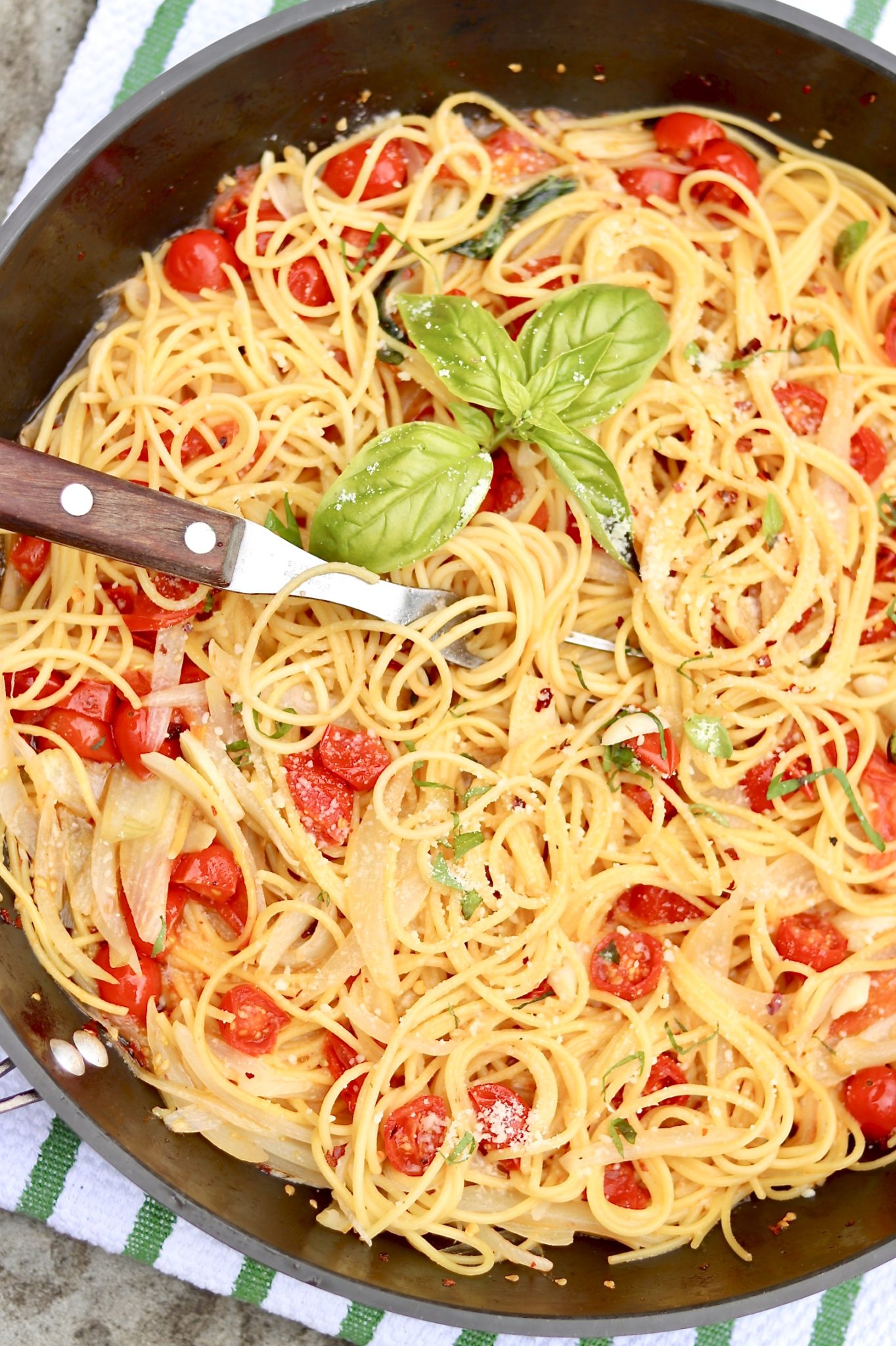 Martha Stewart's One-Pan Pasta (and some riffs on the basic recipe)
Yield: 4-5 servings
This all-in-one meal is a versatile weeknight godsend. Once the water boils, the cooking time is a quick 9 minutes. (And there's a spot-on gluten-free option for those who need it!)
Print
Ingredients
Instructions
Notes

*I’ve also used the same weight (12 ounces) of spaghetti and short tubular or spiral pasta with good success. (I actually think the shorter noodles are easier to stir. Although I haven’t tried, I don’t recommend angel hair pasta, as I think it might be too thin.)

**If you prefer your pasta on the firmer side of al dente, you could start with 4 cups of water. Then if you find you need a little more liquid towards the end, you may add it as needed. (See variations below if you prefer to use broth.) Note that what seems like a little extra liquid at the end will be absorbed as the pasta rests.

•For added flavor, first sauté the onions in the olive oil over medium to medium-high heat for about 5 minutes or until browned in places. Then add the garlic and sauté for another 30-60 seconds or until fragrant. Proceed with the recipe as directed. Prep ahead tip: You may complete this step up to 2 hours in advance, allowing the pan to sit at room temperature. When ready to cook the meal, add the remaining ingredients, bring to a boil and proceed as directed.

Gluten-Free preparation: I’ve had the most success with gluten-free pasta that is made with corn flour and rice flour as ingredients, in that order. (I can specifically say Barilla’s gluten-free penne was a hit with a crowd of more gluten eaters that “gluten-freers.”) Gluten-free pasta often requires 10-11 minutes to cook, so allow for a few extra minutes and taste to ensure perfectly cooked noodles.

I’ve found that rice noodles (I tested brown rice noodles) turned somewhat gummy. Hypothetically, if I were to try using rice noodles again, I would use a short noodle－perhaps made of white rice－and stir just enough to ensure even cooking and prevent sticking to the bottom of the pan. Over-stirring can bring out the starches in the noodles. I have not tried the increasingly popular noodles made with garbanzo beans but have heard anecdotally that they turned mushy in this dish. This could be because the cooking time of those noodles tends to be short and following the stated directions led to overcooked pasta.

Variations:
•Twelve ounces of a short tubular or spiral pasta (like ziti or rotini) works beautifully as an alternative to linguine or spaghetti. (I actually think it’s a little easier to stir.)
•For added protein, mix in cooked and shredded chicken (1 to 2 cups) at the end of cooking time. I’ve also topped the plated pasta with sliced grilled chicken.
•The plated pasta could also be topped with grilled or roasted shrimp.
•Replace the water with chicken or vegetable broth. In this case, however, you will likely want to reduce the salt to balance the amount of sodium in the broth.
•Sauté some prosciutto or bacon until crisp at the beginning, and then remove to a plate and crumble. Stir in once the pasta is fully cooked.
•Use asiago cheese instead of Parmesan－or sprinkle finished dish with crumbled feta.
•Stir in some chopped spinach or kale at the end, allowing a few minutes to wilt it.
•When the pasta is fully cooked, I’ve stirred in roughly chopped, leftover grilled vegetables (zucchini, eggplant, bell peppers and portobello mushrooms all complement beautifully).
•I have not tried, but one commenter made this dish with farro (one cup farro and 3 cups water) instead of pasta, and said it was incredibly delicious and creamy, almost like a risotto.

One Pot Thai Curry Noodles is the spin on the classic recipe that I created for Food52. The first photo includes brown rice noodles, which I do not recommend. My favorite gluten-free alternative is a corn and rice flour pasta, with corn flour being the first ingredient. Additional notes are included in the recipe card above, but Barilla’s gluten-free penne works beautifully. 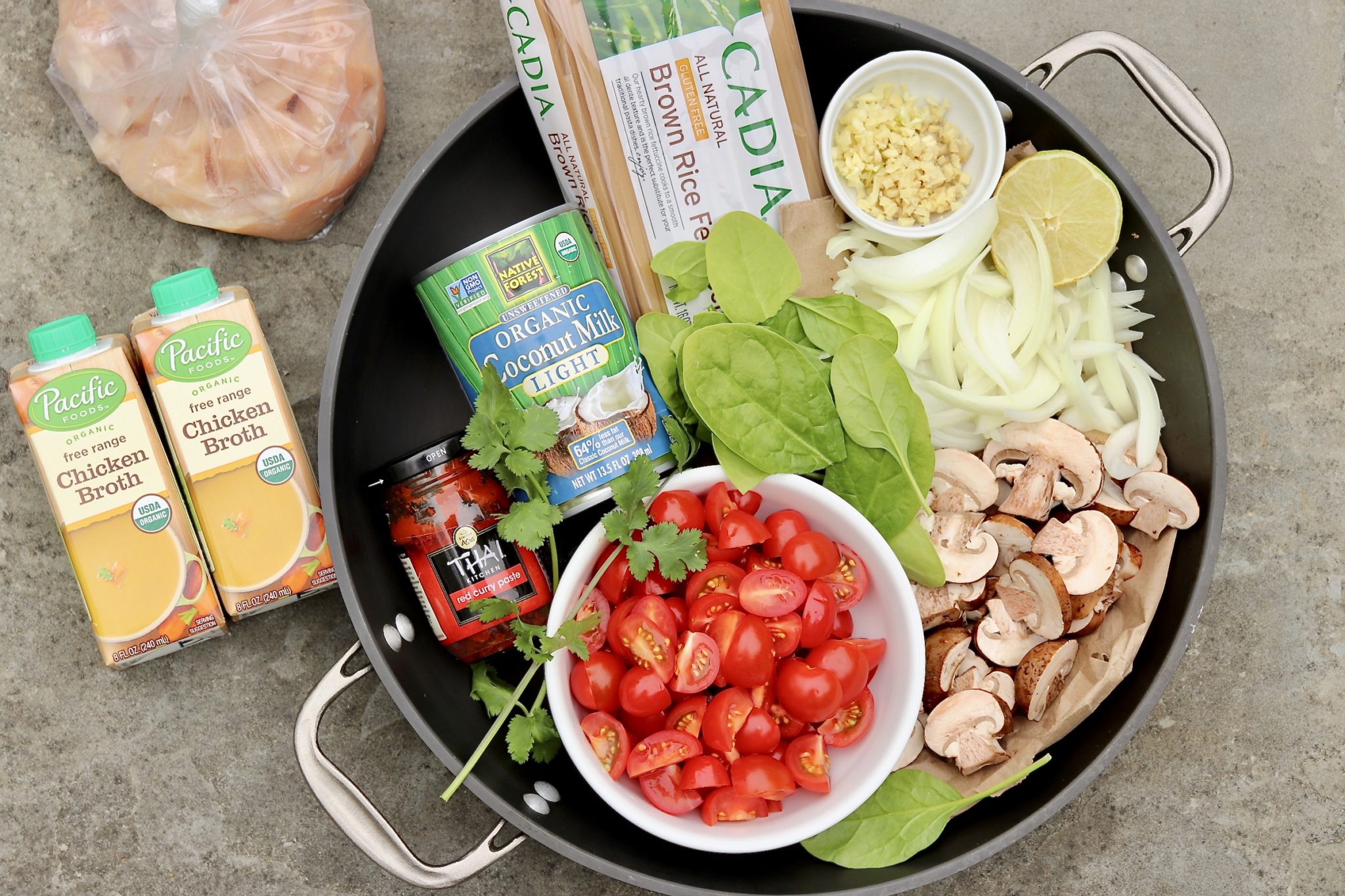 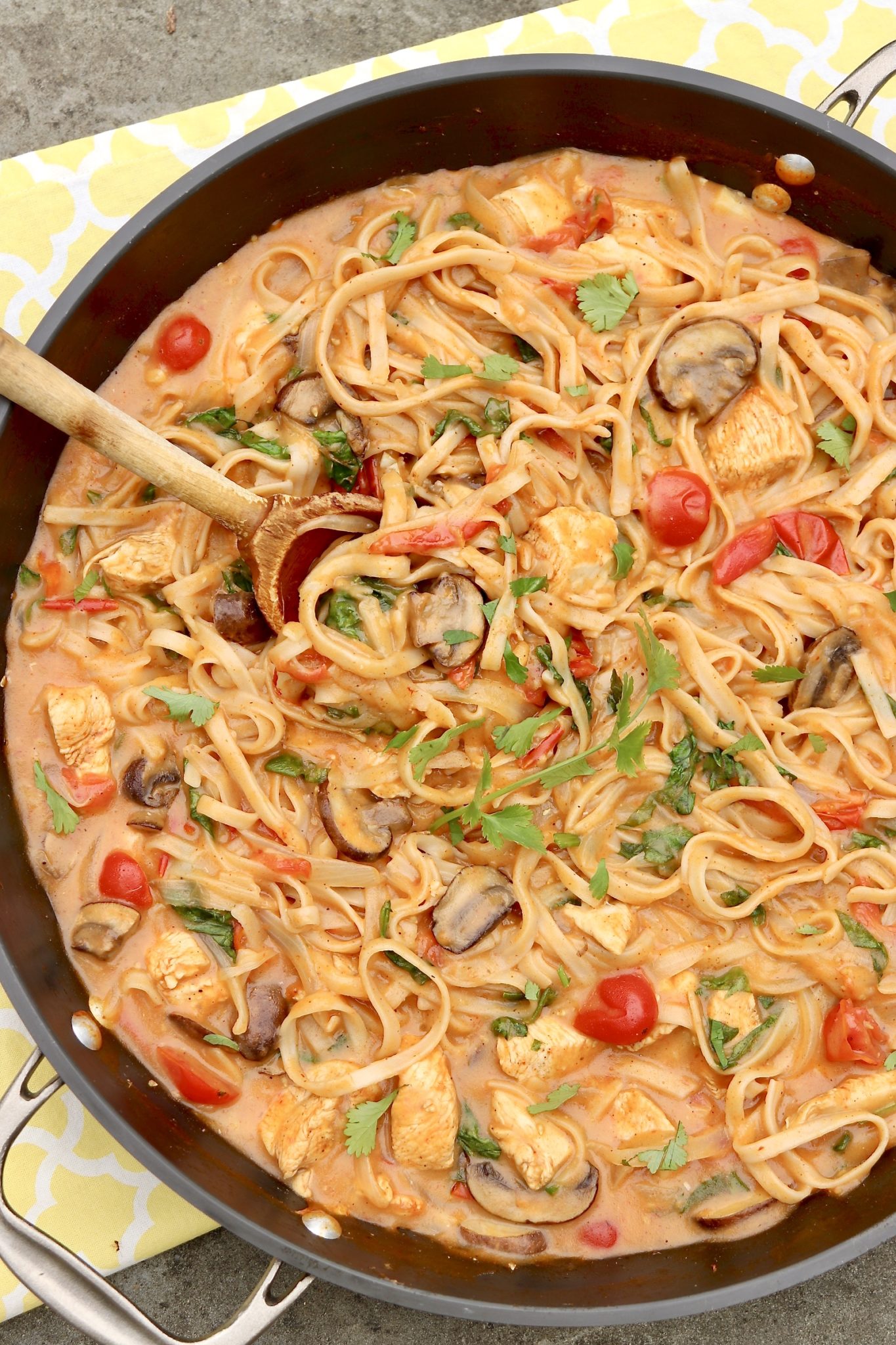