What to do when mealtime is a battle? 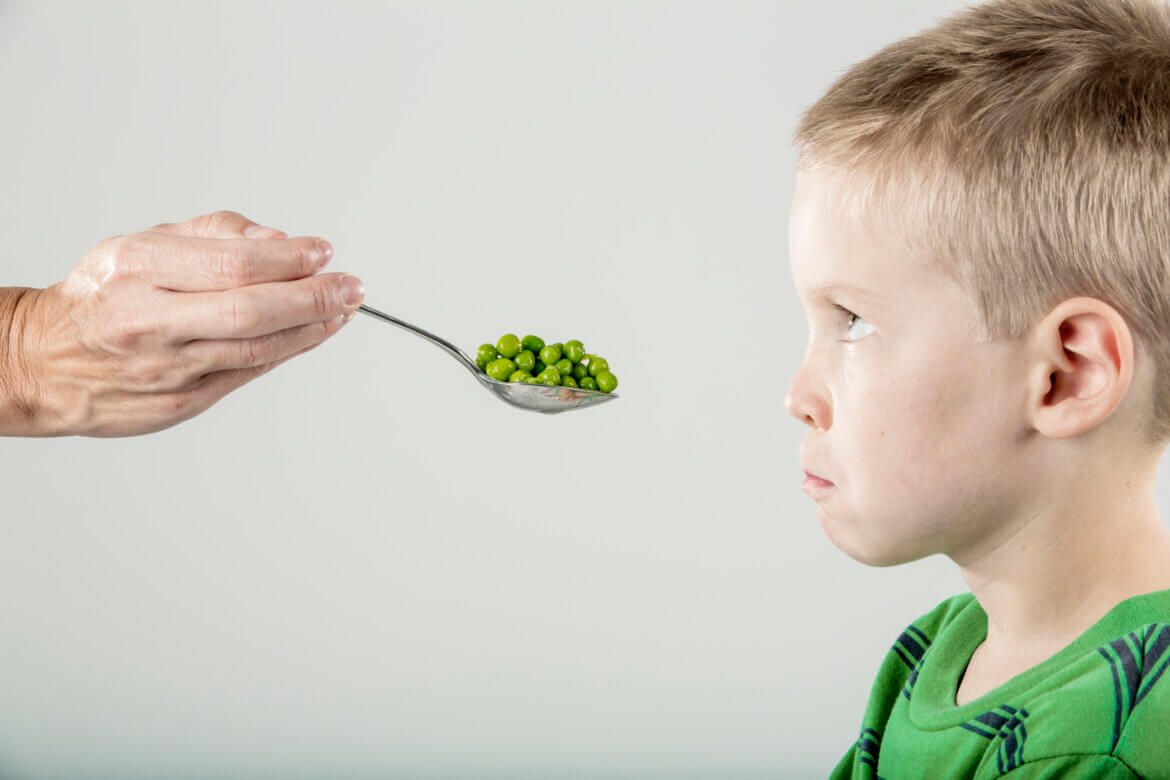 Does raising kids with well-rounded eating habits feel more complicated than ever these days? Are mealtimes are always a battle? In response to a reader question, I’m sharing some tricks that worked for me along with advice from two trusted experts.

Dear Ann, Dinnertime has turned into a battle. Every night at least one kid is refusing to eat what we made or asks if they can have something else. I want them to eat healthy foods, and I work hard to make well-balanced meals every night but I’m tired of arguing about food…how can I make mealtime enjoyable again?

Whether you’re a parent, grandparent, or even a babysitter, you’ve likely encountered a few challenges at mealtime. And whether these challenges stem from a shortage of meal ideas or battles over what the kids will or will not eat, there are ways to make mealtime more enjoyable for all.

Like many children, my younger son did not eat everything I served him. Not even close. No one food could touch another, but that was the easy part.

He avoided most everything on his dinner plate and wouldn’t touch foods that most other kids adore, like pizza and mac and cheese. I have a vivid memory of him refusing to sit at the table, stomping on the floor, and yelling, “I want candy!”

As a parent, it can be concerning: Will my child be healthy? Will mealtime ever be enjoyable again? Dinnertime standoffs can be especially frustrating (and can even fuel resentment) at the end of a long day when you’ve made the time and effort to cook a nice meal.

I felt this way too, but as the years went by, I marveled at how my son became a far more adventurous eater. My husband and I would often look at each other with wide eyes. Did he just eat egg/potatoes/tomatoes/anything that was mixed together/an artichoke/SHAD ROE??

In the spirit of passing along what I gleaned over the years from friends, family, and daily life—while acknowledging that what works for one person may not work for the next—I’m sharing some thoughts on, in retrospect, what contributed to a more enjoyable time around our family table.

I asked Pia Fenimore, a pediatrician with Lancaster Pediatrics Associates (who was my children’s doctor) for her professional insight and any meaningful evidenced-based research as I pulled together my personal tips, which are not meant to replace medical advice or individual counseling with a health professional. I also consulted with FAK dietitian Emily Russo who provides some additional resources at the bottom.

Special thanks to my younger son for his willingness to let me share…with a promise that I make his favorite Baked BBQ Ribs when he gets home from college and mention Cornflake Nachos, his first culinary creation in the kitchen. (Yes, they are really good, and he still makes them often! 😊)

1. First, avoid using the term “picky eater” or labeling kids’ eating habits. I always figured my kids would believe what I told them, so in response to an “Ew! I don’t want that!” I would explain in a neutral way that their taste buds hadn’t learned to like something yet, which is normal. This reinforced that they weren’t doing anything wrong AND helped them see the possibility that this food could be interesting to him in the future.

Dr. Fenimore noted that changes in taste generally continue to occur as the frontal lobe
of the brain develops. This is a long process and used to be thought to be complete
around age 20-27, but recent research about brain remodeling indicates that it may
never be complete. In other words, there is always hope of becoming a diverse eater

2. Toddlers’ calorie requirements are often lower than we think. When Dr. Pia told me the approximate number, I realized that my son was nearly drinking that amount in milk every day. He adored milk.

Oftentimes our barometer of how “well” a child eats is at dinner when the whole family comes together. For most adults, it’s our biggest meal of the day. But some kids may prefer to eat larger meals or snacks earlier in the day, rendering them not so hungry for dinner.

As long as they are getting enough, when they eat is less important. In our case, I found that cutting back on milk throughout the day and giving him a half cup to start dinner (he would always guzzle that down first) led to more willingness to try a variety of foods offered and kept him more interested in staying at the table with us.

I was honest with him, explaining that milk is great and that a variety of other foods are too. So, if he was still hungry after the half cup and some of the food on his plate, he could have more.

3. Everyone likes to be in control. Kids infrequently get to make the decisions; think of mealtime battles as one of the few ways a child can exert some control. It doesn’t make them a bad boy or girl; it makes them human. Nobody wants to be told what to do all the time. Perhaps this is why providing opportunities for kids to feel like they are choosing can be productive. Try to always offer choices, even when both alternatives are acceptable to you.

When I thought not eating was more about control than lack of hunger, I would sometimes divide the food on the plate into two halves–but one “half” was much smaller than the other. Then I’d ask my son if he would prefer to eat just half of his dinner, and if so, he could pick which one. Many times, he would gobble up the smaller half, clearly delighted with himself for outsmarting me.

Dr. Fenimore added that, from a very young age, there are ways children can be given control at mealtime. For example, allow them to choose the vegetable for the whole family, pick a “dip” for their food, or even choose who sits where.

4. Repeated exposure is often needed for someone to learn to like a food. The number of exposures needed to acquire a taste for a particular food will be different for all, but I once heard the average is around 16. (I mentioned this to Dr. Fenimore recently and she has heard 22.) I figured that was a big enough number to keep us in the game while not feeling unattainable. This ties into my next tip…

5. Encourage one bite. Rather than make mealtime a battle, encourage one taste. If your child doesn’t like that bite, they may stop. No standoff. I would always say, “That’s ok. Your taste buds just haven’t learned to like it yet. Or I guess you haven’t hit 16 tries yet.” And then we could laugh about it a little and move on. Note: if your child gags or really puts up a fight, give that food a break before reintroducing again. There is no food that’s worth a standoff. (For us, that was sweet potatoes!)

6. Less on the plate is more. Large portions of food can be daunting to a kid, especially when unfamiliar or chosen by someone else. Keep in mind that kids have growth spurts and may be hungrier some days and not so hungry other days. They can always go back for more.

7. Should I offer substitutions? In the early days of our mealtime challenges, I would grab a yogurt, some cereal, perhaps some cheese and let our son nibble on that so the rest of us could eat in peace. However, rather than substituting or being a short order cook over the long haul, I started to include at least one item on his plate that I knew he would like. I offered small portions of the rest and considered any willingness to taste to be a bonus.

8. Give yourself a moment of grace. If some days mealtimes don’t go as planned, let it go without letting them see your frustration and try again another day. As Emily mentioned, the more worked up a caregiver gets, the more intense future mealtimes tend to be.

At the end of the day, sitting down to a meal together offers many benefits. Whether we all ultimately enjoy the same foods is of less consequence. Looking back, this is some of my most cherished time—time to actually sit and talk amidst schedules that grew increasingly busier as the kids grew older.

9. Always keep the big picture in mind. Fenimore recommends asking ourselves a few questions: “Is my child growing in a balanced way? Do they have plenty of energy? Am I setting a good example by eating a wide variety of healthy foods? If these are the main themes of the way parents think about food, then it will be fine.”

Additional resources: If you are interested in trying out some other approaches to mealtimes–or have adult children who are using different techniques at mealtimes with your grandchildren–Emily suggests checking out Ellyn Satter’s Division of Responsibility in Feeding. Many dietitians have been recommending this approach, and it’s always interesting to read about various theories!

A few more things… I have so many wonderful conversations and emails with readers, and I would love to bring more of that dialogue to the pages of this blog. My plan is to soon answer another reader question about easy, wholesome foods to feed grandchildren when they come to visit. (In my case, I’m practicing with my young nieces!)

Questions, comment, and feedback: As always, please send any and all questions, requests, and feedback my way. Comments on the posts are always welcome, and you may email me through the contact page anytime. You can also reply to my twice weekly emails. If you aren’t on that list and would like to be, simply enter your email address in the light blue box at the bottom of this page.