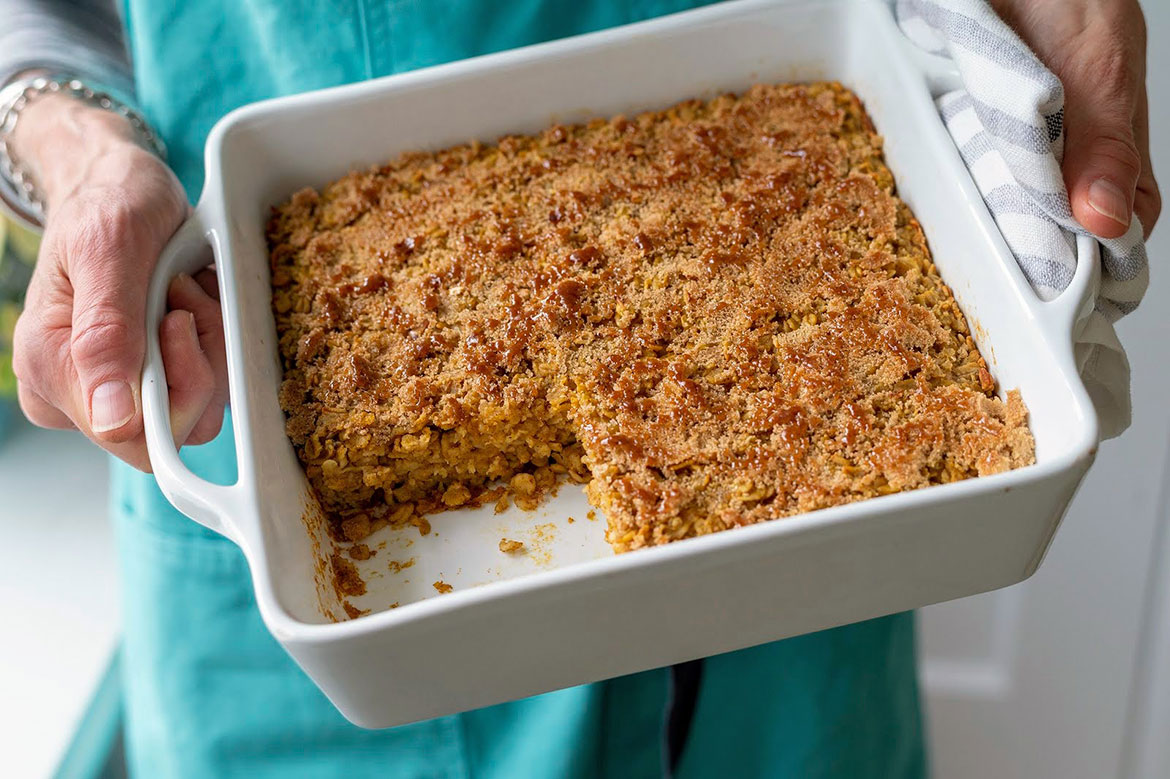 Pumpkin and warm spices join a short list of kitchen staples in this hearty breakfast that may be prepped in advance and enjoyed throughout the week.

From sweet pies, muffins, cookies, and cakes to savory soups, vinaigrettes, and even butter, there are so many ways to enjoy pumpkin.

For a quick pumpkin fix, I’ve long enjoyed stirring a quarter cup of pumpkin puree and a hearty sprinkle of pumpkin pie spice into a serving of basic stovetop oatmeal, finishing with a sprinkle of brown sugar and a spoonful of chopped nuts.

For a muffin-like variation on the stovetop approach that my whole family enjoys, I turn to the following baked oatmeal recipe.

For years, I’ve relied on homemade baked oatmeal as an easy, economical, and wholesome way to start the day. Store-bought versions can be delicious but often contain more sugar and oil than oats. Doing it yourself allows you to control the ingredients in a way that still tastes great, dare I say better? You can also work around most dietary restrictions, making the baked oatmeal dairy, gluten, soy, or nut-free as needed.

Along with the pumpkin, this baked oatmeal cleverly incorporates the natural sweetness and moisture of a freshly grated apple. If you’re in a hurry, a half cup of applesauce (or one of the pantry-stable, single-serve 4-ounce cups), may be substituted. That said, you can grate a small apple quickly with the aid of a handheld grater－no need to peel it either.

There is probably no food I have experimented with more than baked oatmeal, and I have created many seasonal renditions of my most basic recipe, which reminds me of eating a warm cinnamon oatmeal cookie for breakfast. If there’s one thing I’ve learned after preparing countless batches over the years, it’s that the recipe is very forgiving and can be adapted in a myriad of ways.

In other words, you can feel confident in the outcome no matter what kind of milk you use, if you use honey instead of maple syrup, or if you feel compelled to add nuts, raisins, shredded coconut, and so on.

I’ve made outright mistakes over the years, such as mixing up the baking soda and powder or absentmindedly adding too much milk or eggs. Despite the more egregious oversights, however, never has an outcome been bad. On occasion, a mistake has even led to a new recipe.

Note that I have burned the brown sugar topping, a seemingly bad outcome. (One would think I could walk away from the broiler for one minute without being distracted!) If the same should happen to you, the burned flecks can simply be scraped off. Now, of course, I stand beside the oven, watching attentively, until the sugar is caramelized. It doesn’t take long. 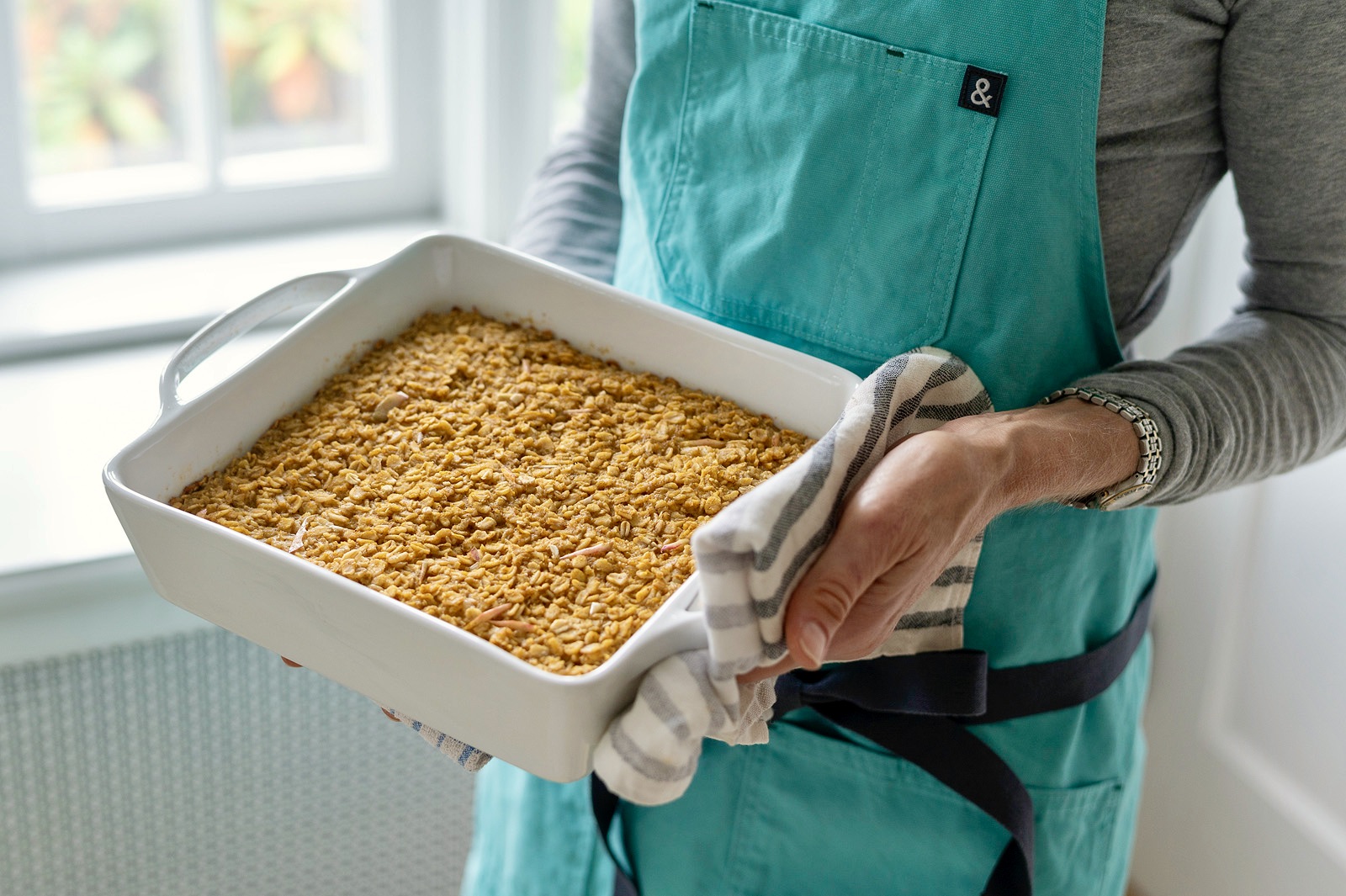 The brown sugar topping balances the modest use of sweetener in the body of the oatmeal. It may be omitted (as it is in the photo, above) if you prefer a less sweet breakfast, although the crunch it provides is rather appealing. ; )

I credit this topping (shown in the photo, below) as what won my kids over to the world of oatmeal when they were little. I’ve always found that a little sugar goes a long way when it hits your tongue first. If you like the concept but ultimately prefer less sweetness, you may use two to three tablespoons as a happy medium. Optionally, you can reduce the maple syrup that’s mixed into the oatmeal and keep the crunchy topping. As mentioned, the recipe is flexible and forgiving. 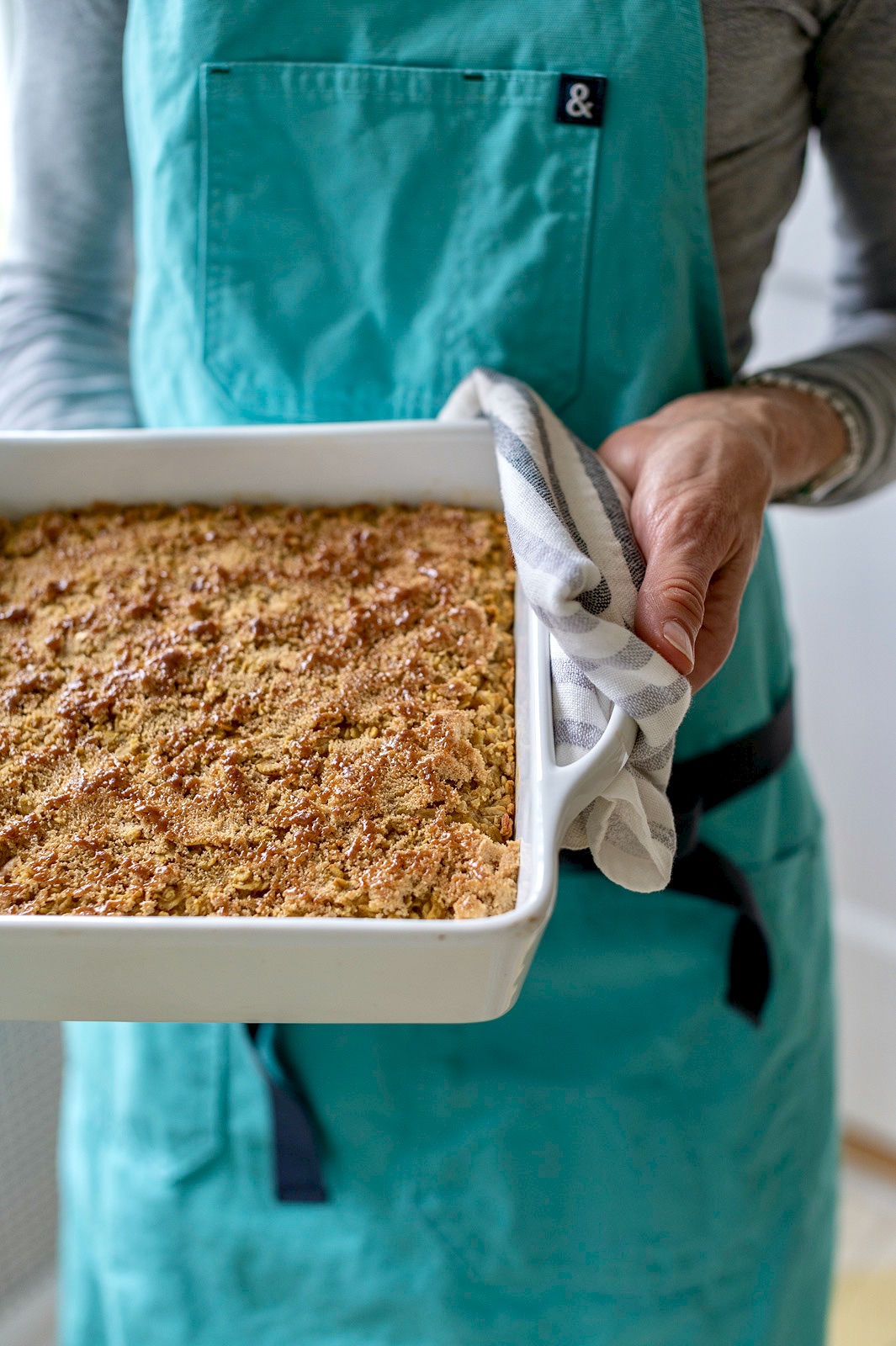 Note: As printed, the recipe is an update of the original recipe, which was first posted in 2012. In the original recipe, I used 1 teaspoon of pumpkin pie spice. The pumpkin spice craze that has swept over the country in the years since seems to call for a slightly more assertive flavor. Diehard pumpkin spice fans may wish to further increase the spice to 2 teaspoons, or shore up the warm flavors with an extra sprinkle of cinnamon, freshly grated nutmeg, and/or ginger. A small pinch of cloves would likely add a little something special as well. 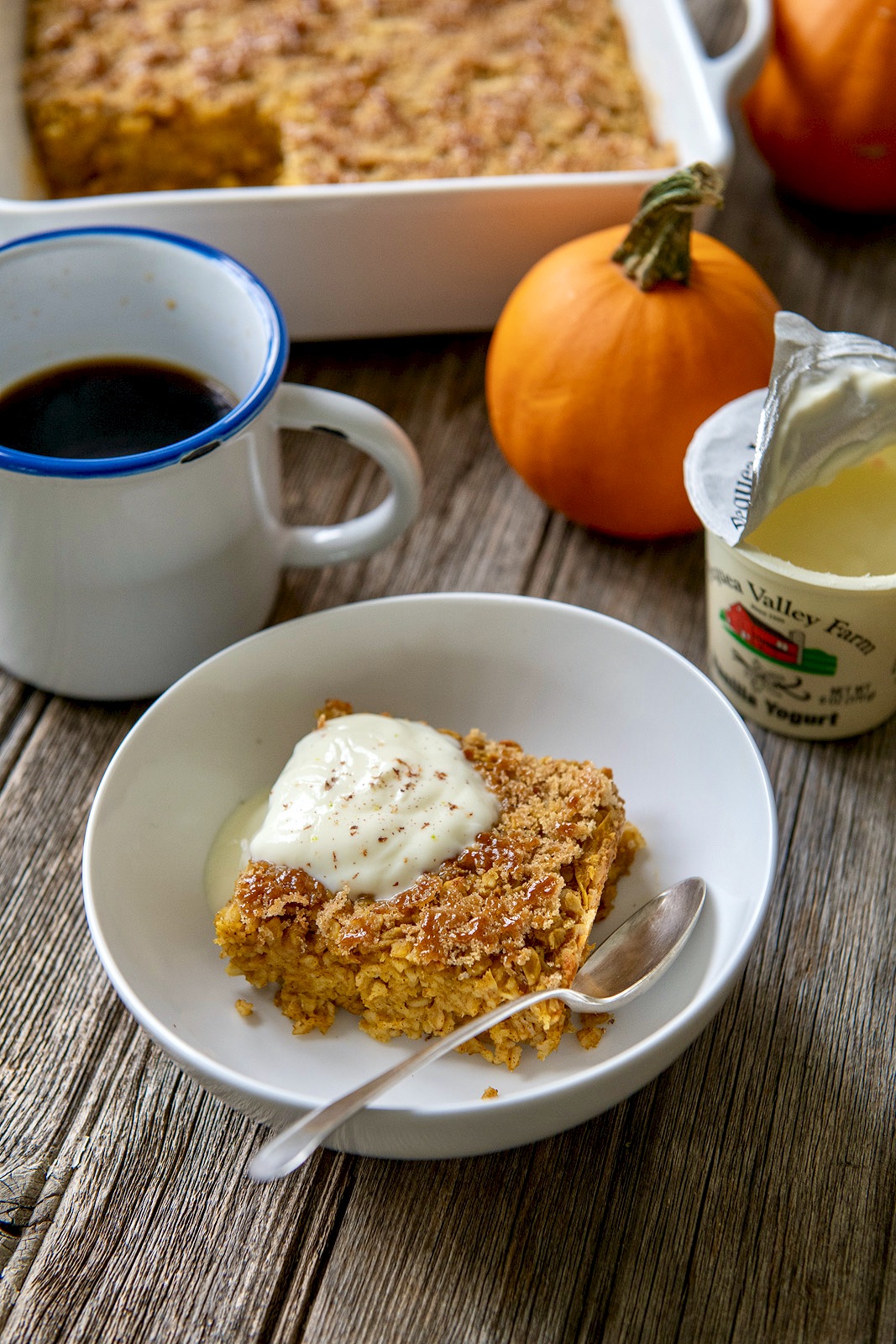 Another big thank you to the talented Donovan Witmer for coming to my kitchen and snapping photos. The pictured coffee and oatmeal in the dish were his breakfast…and he approved! 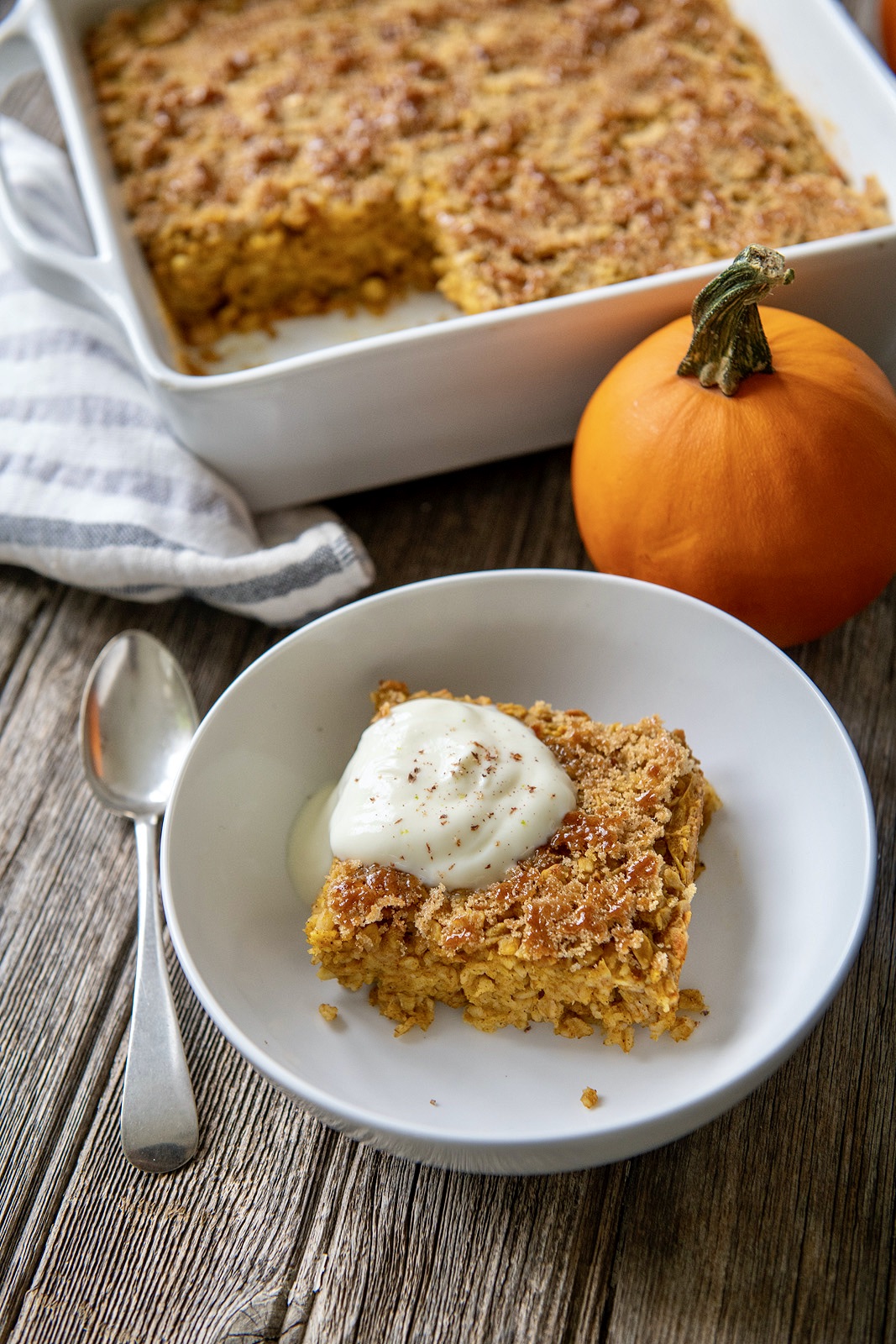 Crunchy Top Pumpkin Baked Oatmeal (Muffins Optional)
Yield: 6 generous servings or 8-9 average pieces
Whether enjoyed hot from the oven or reheated throughout the week, this prep-ahead breakfast tastes like something you'd get from a fancy cafe–and is definitely worth waking up for!
Print
Ingredients
Instructions
Notes & Helpful Hints

*Pumpkin pie spice is a combination of cinnamon, ginger, nutmeg, and allspice. If you do not have the pumpkin pie spice, use any combination of these that you like, or simply use cinnamon.
**When using melted coconut oil, it is helpful to bring the cold ingredients to room temperature before mixing so the oil doesn’t immediately re-solidify upon contact. If little bits harden throughout when chilled, don’t worry. They will melt and redistribute when baked.
***When baking as muffins, I refrigerate the uncooked oatmeal in the mixing bowl and transfer it to the muffin tin once the liquid has been absorbed by the oats. You can make 8 regular muffins or 6 jumbo. In a time pinch you may bake the oatmeal right away. The rest gives the oats time to absorb the liquid and plump up, which slightly enhances the finished baked oatmeal. 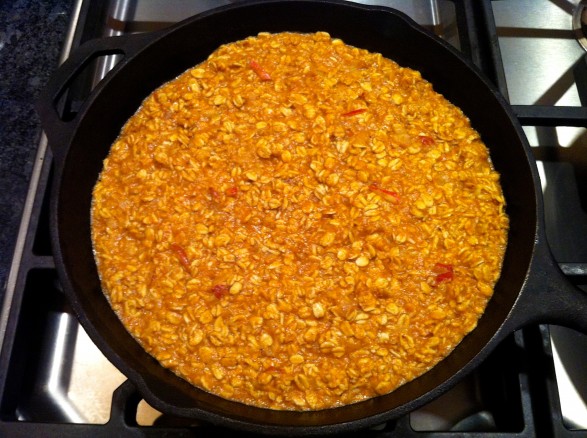 The photo above, from the original 2012 post, shows the oatmeal baked in a 10-inch cast iron skillet. It is just one of the many pan options that will work. The square baking dish, below, measures in between the standard 8- and 9-inch square pans. Any baking dish that is roughly a 2-quart size will work. You may choose based on what you own and whether you prefer a thinner or thicker baked oatmeal. Simply adjust the cooking time up or down a few minutes as needed, as a thinner oatmeal will cook faster than a thick one. 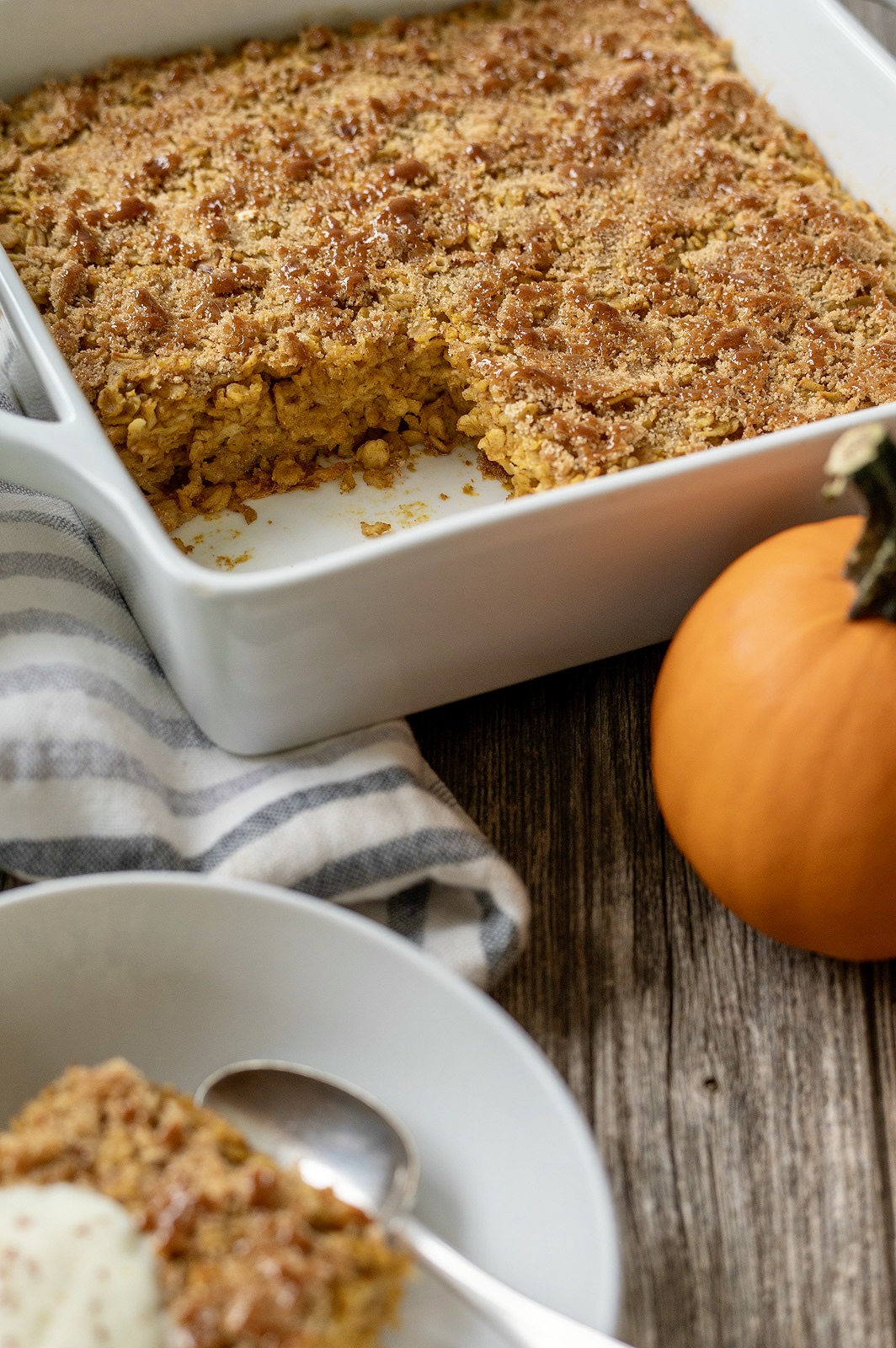 I’m always experimenting with my recipes and here are a few other things I’ve tried: For those who like a little extra “texture”, mix two tablespoons of steel cut oats into the batter and proceed as usual. A quarter to a half cup of chopped nuts and/or shredded coconut offer other complementary options.