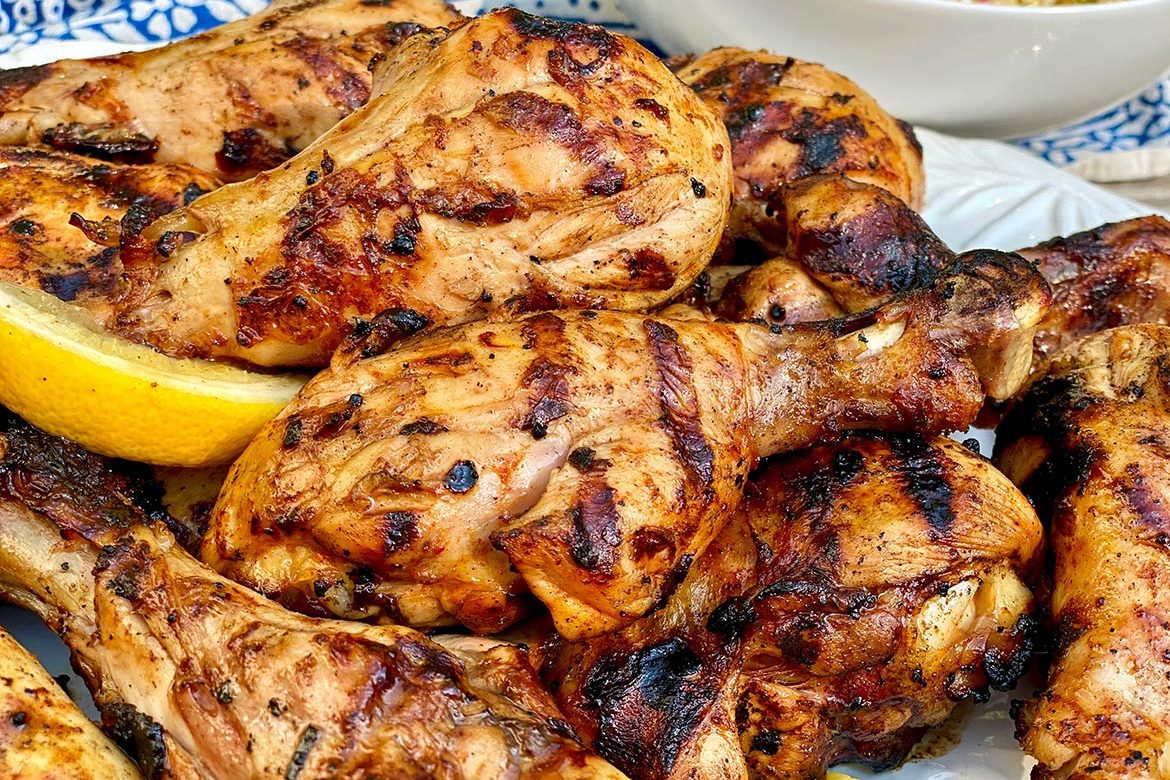 Shabnam Arora Afsah was one of the first food bloggers I met when I began my own food adventure in 2012. Early on, I became an instant fan of her cooking when she contributed an outstanding shrimp recipe for a grilling article I was putting together for my newspaper column. We’ve connected over food and family in the many years since.

Years ago, Shabnam had mentioned that she and her family had experienced racism in its ugliest form, so I was curious as to how the recent protests had been impacting her.

Shabnam was born in India. Her Hindu parents were Partition survivors who became refugees. (As a historical reminder, the Partition was the 1947 division of British India into two independent states, India and Pakistan. Ten to 12 million people were displaced along religious lines, creating a massive refugee crisis.)

As a teenager, Shabnam fell in love with a Muslim boy. For many years, they kept their relationship a secret, but they eventually told their families and married. In Shabnam’s words, their marriage “was a total no-no in Indian society…kind of like a mixed-race marriage in the US in the 1940s and 50s. We could have been killed for dating each other, which is why we moved to the US.”

Thanks to her husband’s job, Shabnam and her family lived all over the world for many years, ultimately settling outside of Washington, DC. Though she now feels protected from overt racism in most of her day to day life, she recounted many examples of “the usual” hate: her son being called a terrorist; her family being told to go back to where they came from; and being called derogatory names that are better left untyped.

In reality, Shabnam and her family are highly educated, politically active, family-oriented, community volunteers. A lawyer by trade, Shabnam teaches autistic children and recently finished the most ambitious project of her life－a novel that is very loosely autobiographical. (She’s looking for agents if anyone has any connections!)

And did I mention Shabnam can cook?

Shabnam says that her cooking is a mishmash of the places she’s lived, and even her Indian cooking reflects a variety of cultures. She shared the following chicken recipe with me recently and gave me her blessing to pass it along after my family raved.

Because she cooks the dish in a tandoor, Shabnam calls this recipe tandoori chicken. (A tandoor is a cylindrical clay or metal oven used throughout India and south and west Asia.) The flavors she utilizes in this recipe, however, are different than what is traditionally considered tandoori chicken in the United States－plus most of us will likely use a grill instead of a tandoor－so Shabnam gave me free rein to avoid confusion and rename the recipe.

I chose the light-hearted name to credit Shabnam, and also to reflect what is truly unique, if not magical, about her method of preparation.

First, the skin is removed from the drumsticks, which happens to make the chicken far healthier. But thanks to the magical marinade, the finished grilled chicken tastes and looks like it has skin. For the record, my skin-loving family actually did not notice it was missing. I had to tell them! (Tip: depending on where you purchase your chicken, the butcher may remove the skin for you. Otherwise, it’s easy to pull off.) 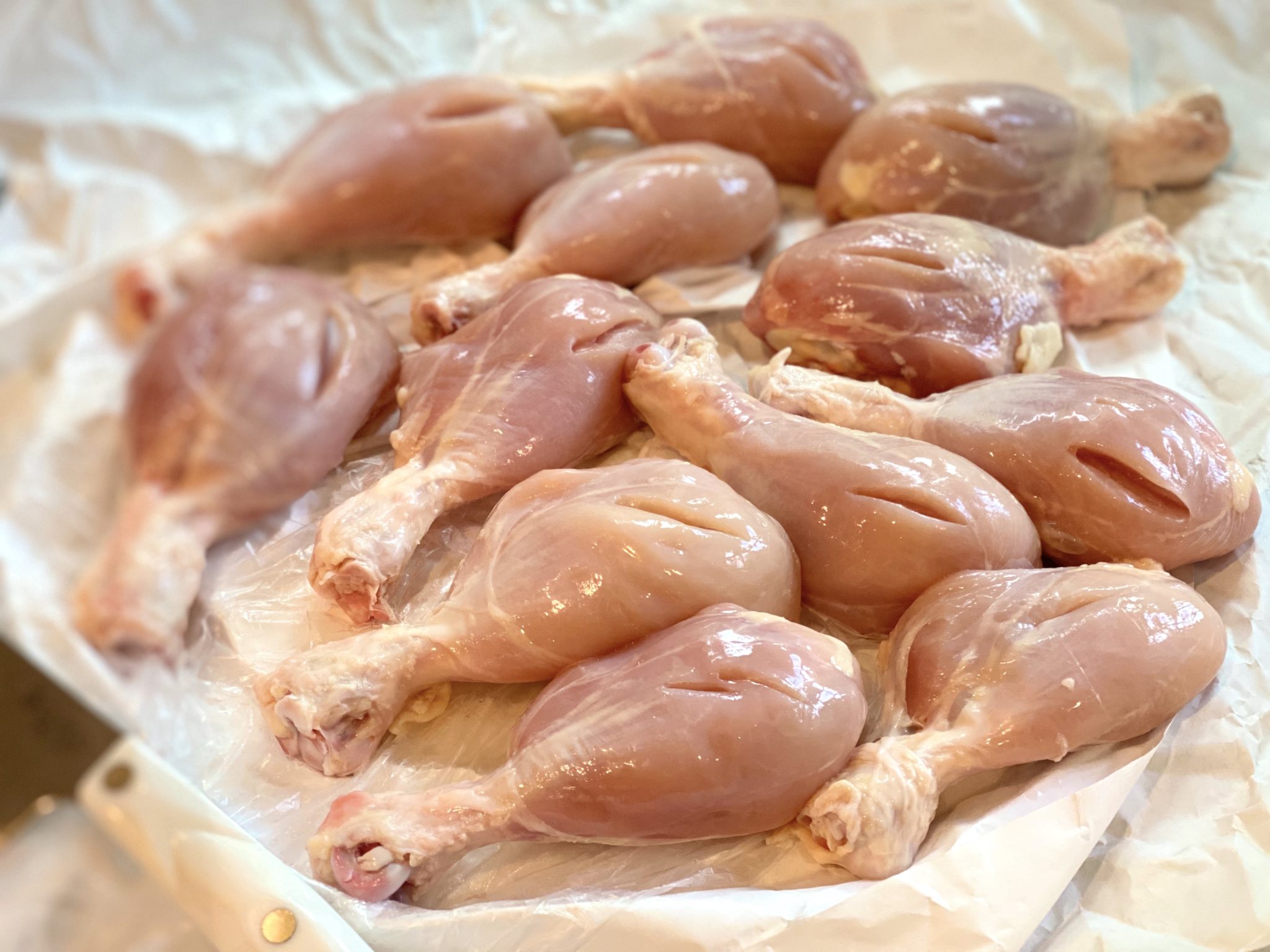 The secret ingredient in that magical marinade? Onion juice! Turns out it works wonders as a tenderizer and flavor enhancer. Shabnam includes a few other tricks along the way, like “slashing” the drumsticks, which could be applied to other recipes as well. 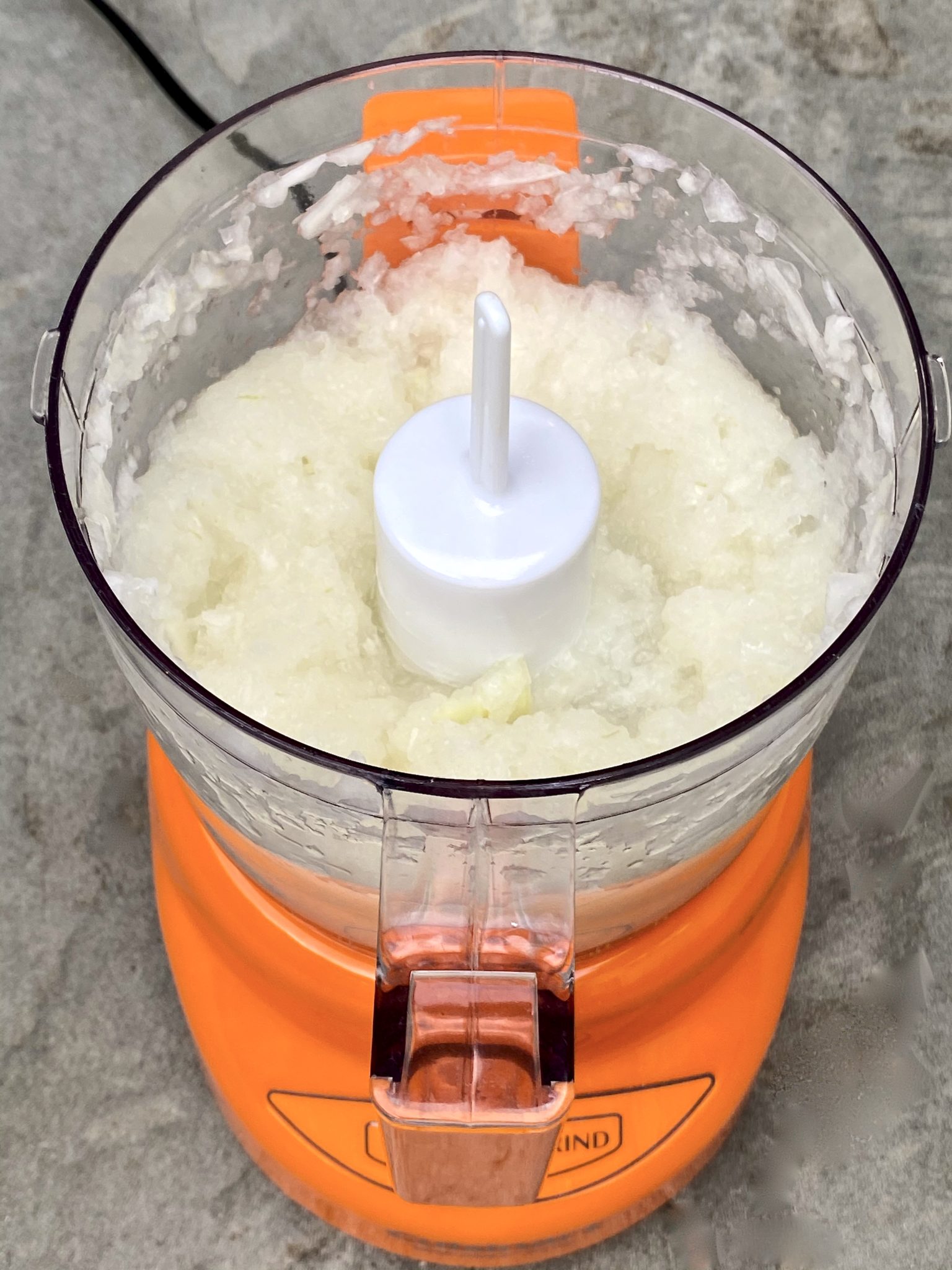 One large or two smaller onions are blended or pureed in a food processor or mini chopper. ⇧⇧ The onion juice is then strained out ⇩⇩ and used as a base for the marinade. This unusual ingredient adds great underlying flavor (but not at all onion-y) and tenderizes the meat, too. 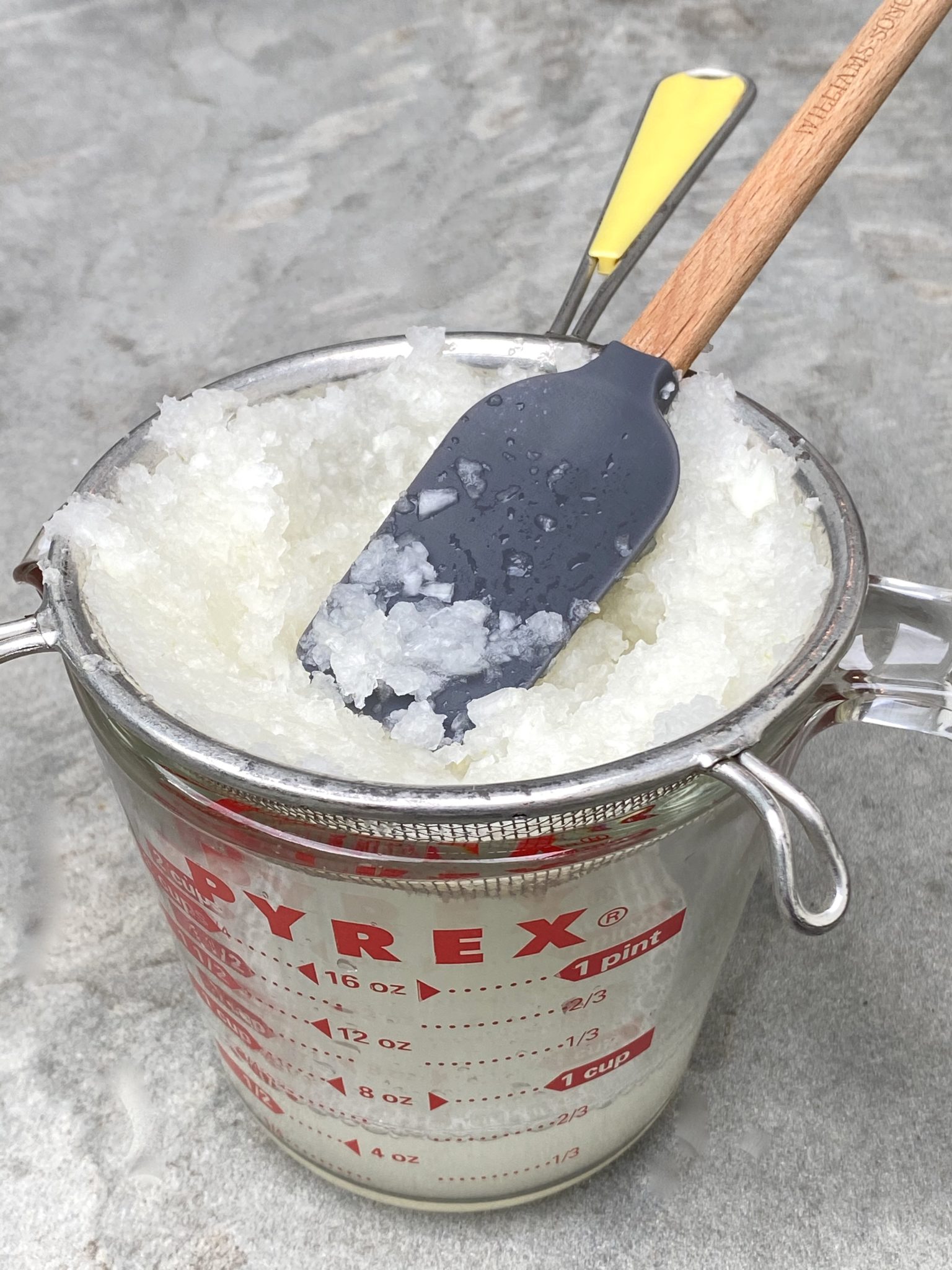 You’ll need a ½ cup of the onion juice－an extra couple of tablespoons is fine to use if you have it. The onion solids may be discarded or saved for adding flavor to soups, stews, or stock. 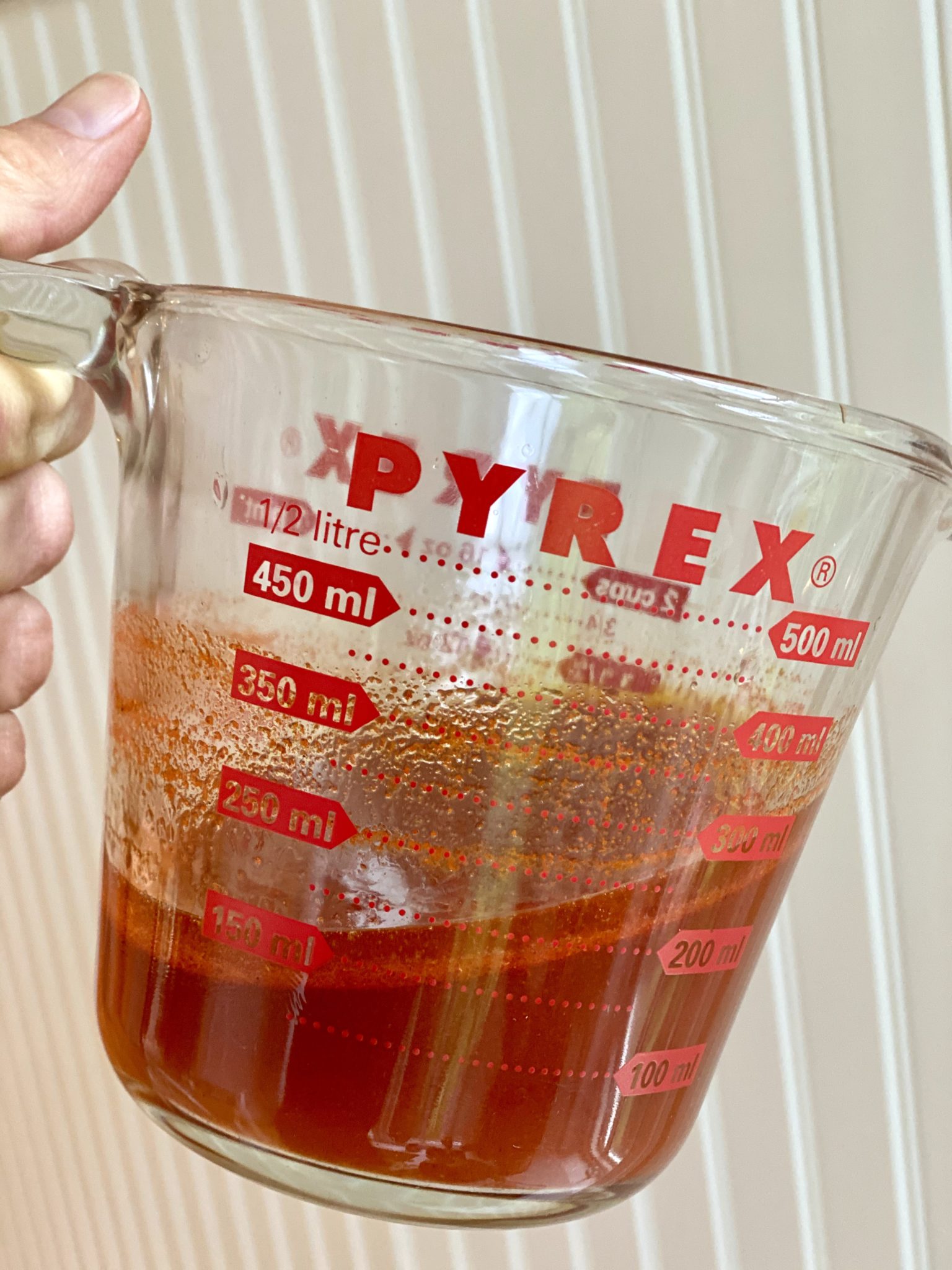 A short list of other ingredients is then added to the juice to form a red-hued marinade. If possible, allow the chicken to steep in it overnight. The longer the soak, the more tender and flavorful the chicken will be. 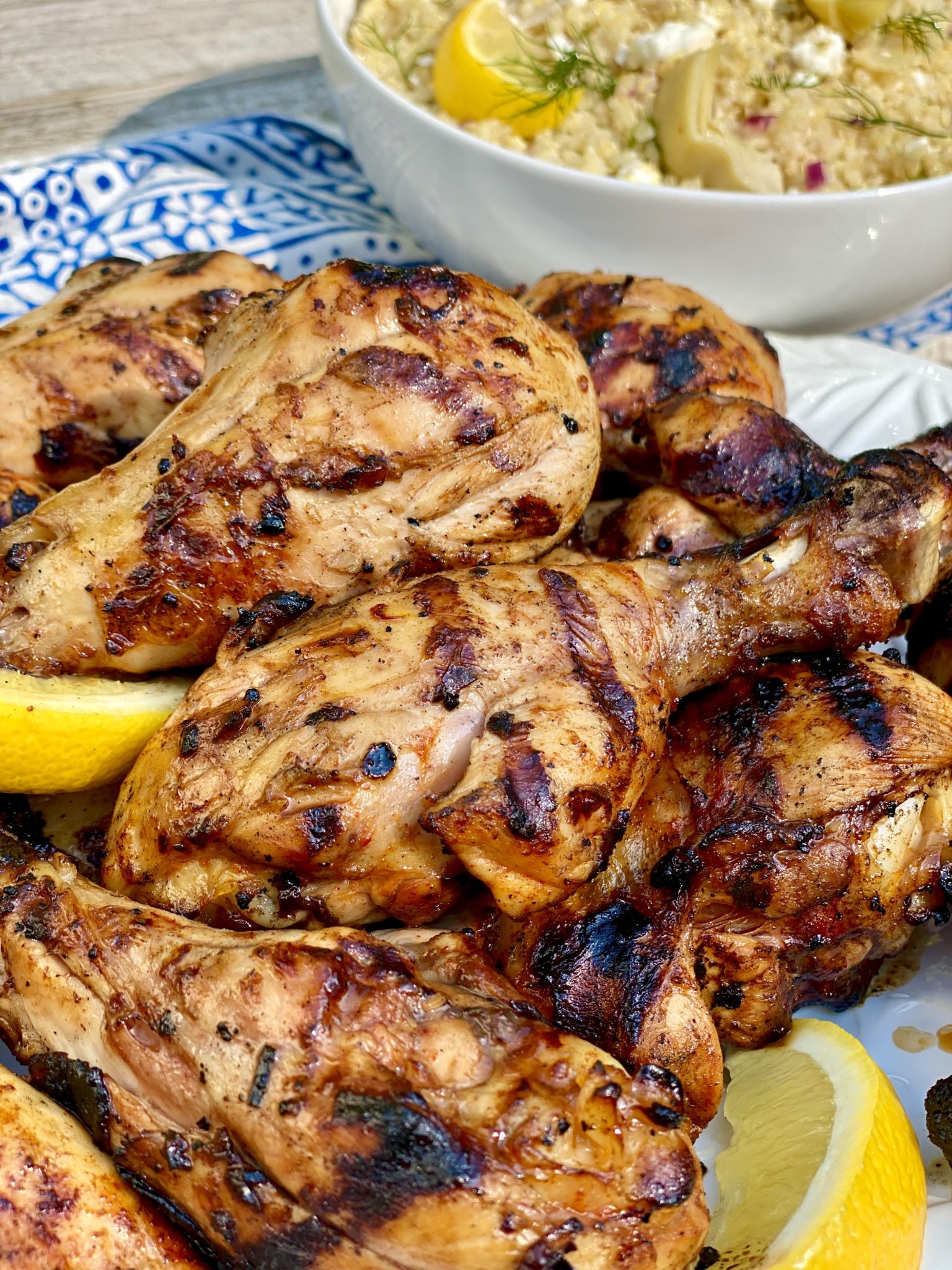 I also tried the marinade on boneless, skinless chicken breasts, and the cooked meat was very tender and  flavorful. This cut didn’t take on the taste and appearance of having skin, however, likely because it’s leaner and the color is naturally lighter. I encourage you to try the drumsticks (or marinate and grill a mix), but for those who truly prefer boneless breasts, the outcome will still be quite good.

Shabnam enjoys the drumsticks served hot with a side of salad, flat bread, and raita (yogurt with cucumber, cilantro, and mint). I served them with quinoa salad with a lemony vinaigrette, although the flavor of the chicken is basic enough to complement virtually any side, from sliced tomatoes and corn on the cob to potato salad, green vegetables, bean salads, and baked beans. 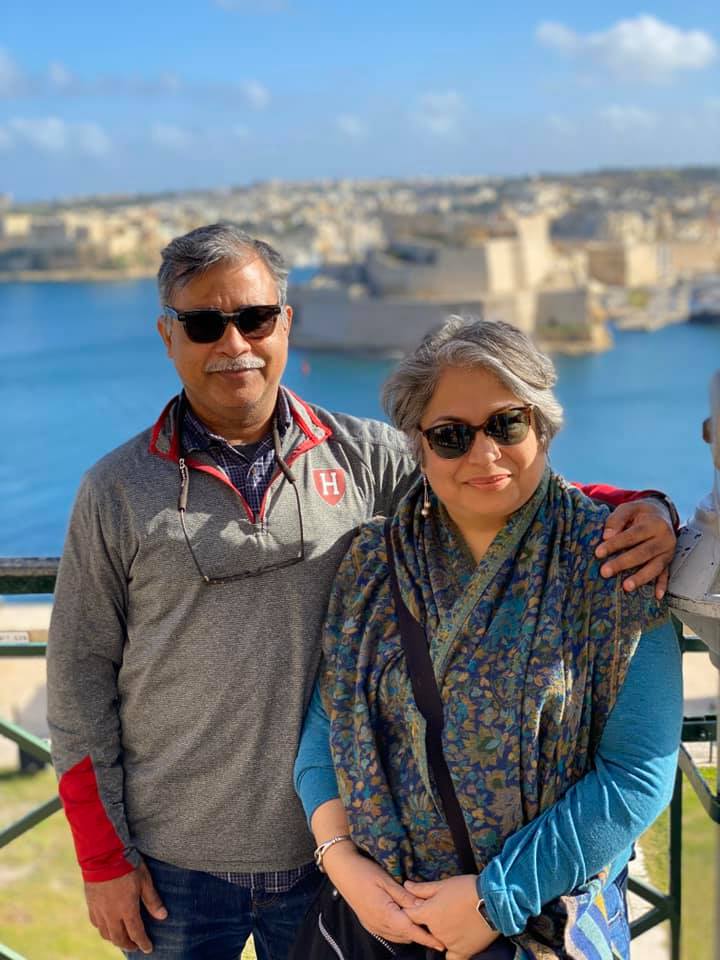 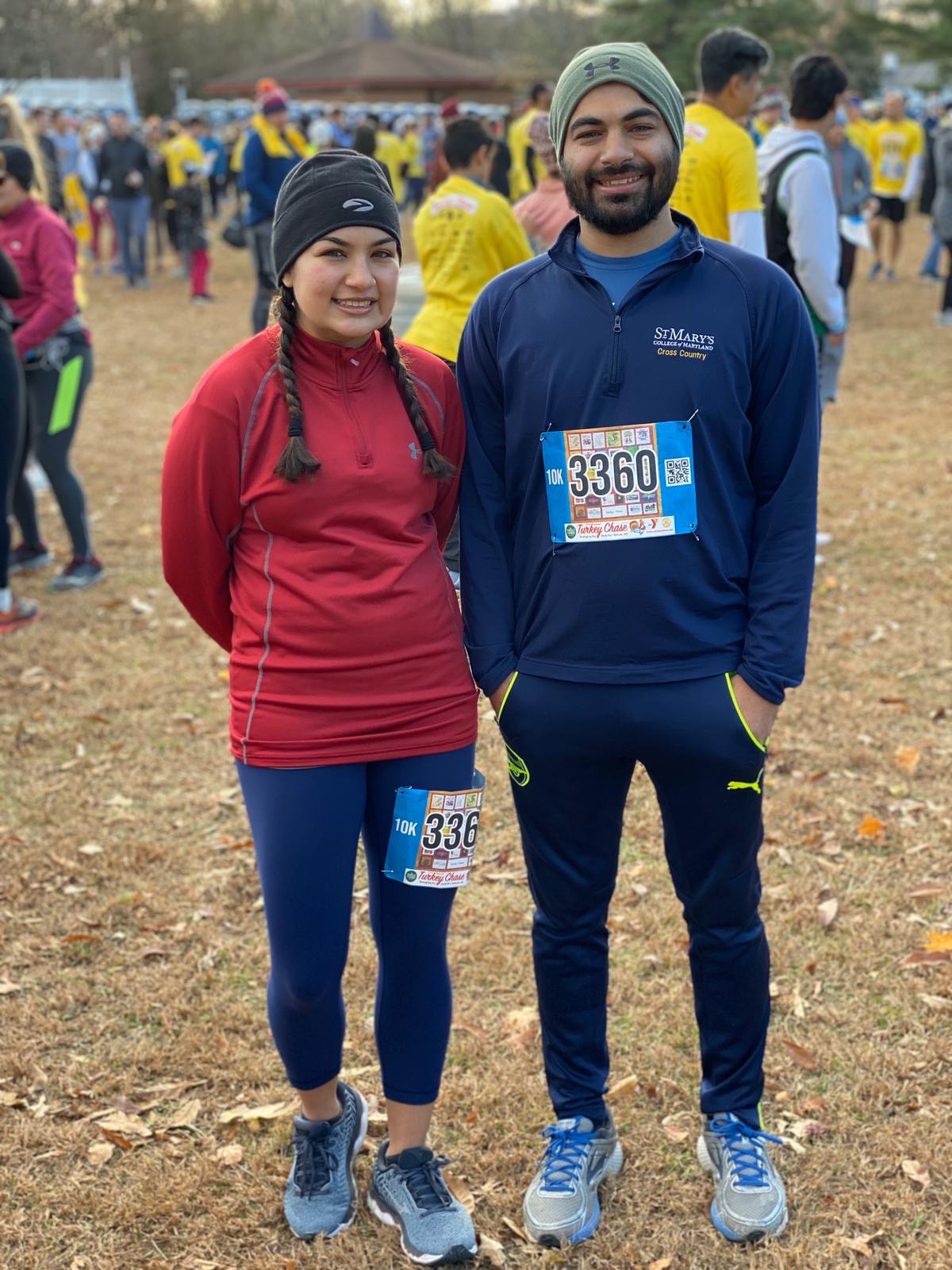 Shabnam’s children, Simran and Aman, are pictured here before a turkey trot race just outside of Washington, DC last November.

At the end of the day, my hope is that sharing this recipe serves as a small but meaningful reminder. Food is just one of the many things that unites us. We all eat and use food to come together, to celebrate, show love, and sustain ourselves.

Shabnam has brown skin and mine is white, but at the end of the day, it’s just a color. Below that thin exterior layer, we all look the same. Our hopes and dreams tend to be pretty similar, too, and we should all have the same ability to realize them.

Shabnam actually thanked me for my desire to share her recipe and talk about People of Color. In her words, “Our country stands at a crucial crossroads right now, and I feel like all of us need to pitch in to fix this situation.”

My hope is that initiating conversation and learning more about each other’s culture and personal history will be a step towards greater understanding and acceptance. ❤️ 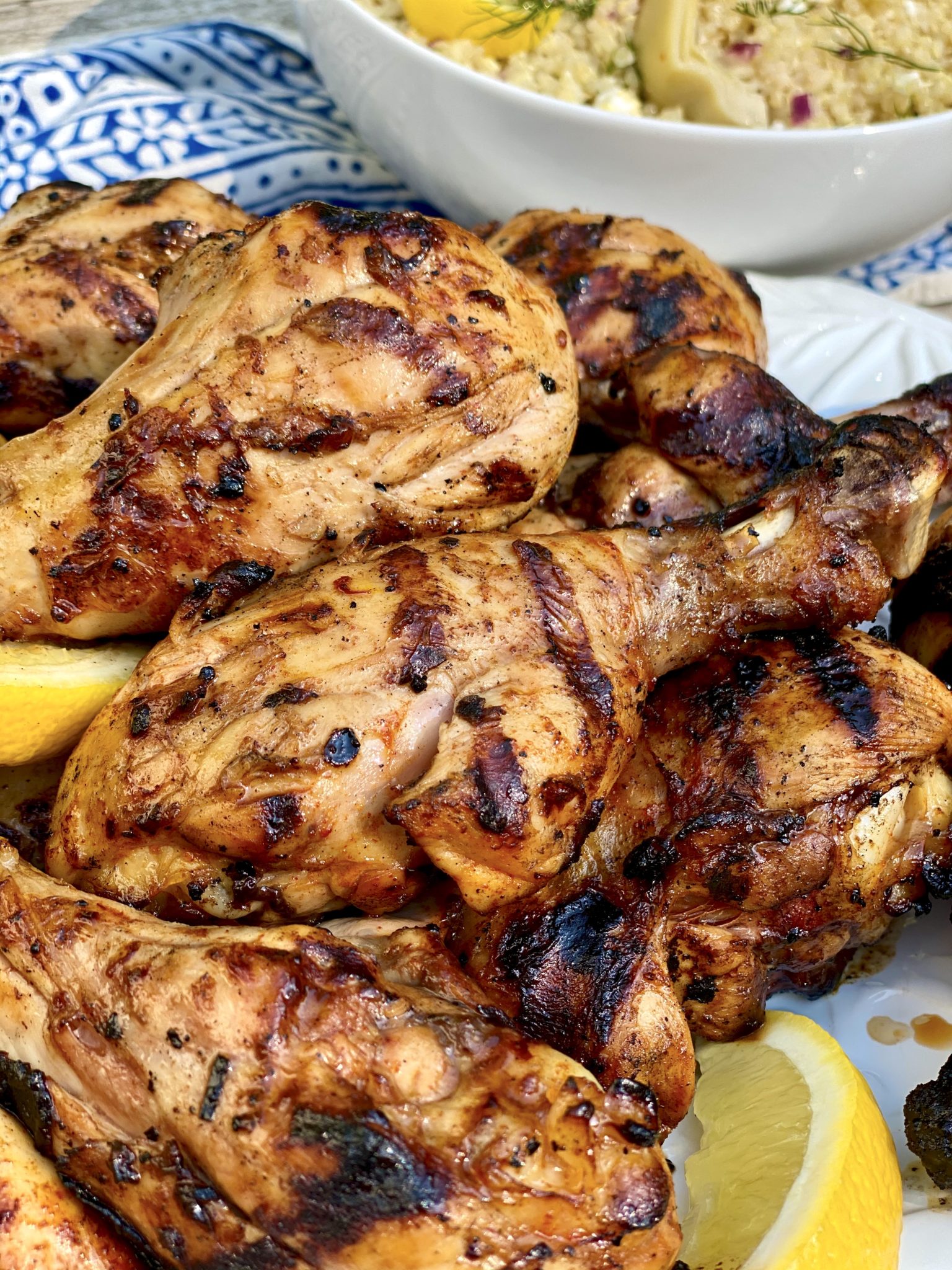 As always, if you try these drumsticks (or Shabnam’s grilled shrimp), please report back!

Shabnam's Secret Chicken Recipe
Yield: 12-14 drumsticks
Skinless drumsticks are tender and juicy on the inside and crispy on the outside thanks to this clever marinade. If possible, allow the chicken to marinate overnight.
Print
Ingredients:
Instructions:

With a sharp knife, make a deep slit in the flesh of each drumstick. (Shabnam calls this slashing: make a cut that goes almost to the bone in the meatiest part. This allows the marinade to permeate and aids in thorough cooking.) Set aside.
Peel the onion and coarsely chop it. Grind it in a food processor, mini chopper, or blender to make a fine pulp. Using a fine sieve or cheesecloth, squeeze the onion pulp with a spoon to extract the juice of the onion. You want at least ½ cup, but a little more is fine.

To the onion juice, add the lemon juice, honey, paprika, salt, saffron, and olive oil, and stir to combine.

When ready to grill, remove the chicken from the refrigerator and bring to room temperature. Preheat the grill to medium and cook over direct heat until the outer layer of the chicken legs is brown and crispy, and the internal temperature is about 180℉. (See notes below for helpful grilling tips.)

•Allow the drumsticks to come to room temperature prior to grilling.
•Keep the grill temperature around 350℉ or medium heat. This lower-than-normal grill temperature is perfect for grilling drumsticks because it allows the meat to cook perfectly but does not cause the skin to burn or scorch. (My husband likes a little char, so he often starts a little higher when he grills.)
•Quarter turn your chicken pieces to ensure each side is on the grill.
•Grill for 7-10 minutes per side, and then flip with tongs, lifting the drumsticks gently to ensure that the skin isn’t sticking to the grate.
•Keep the lid closed as much as possible. This will surround the drumsticks with heat, ensuring they cook more evenly and quickly.
•Reduce heat and/or move the chicken to indirect heat if the drumsticks are sufficiently browned but not cooked through.
•Cook until the internal temperature of the drumsticks reads 180℉. This is higher than the required 165℉ but ensures far more tender dark meat that pulls off the bone more easily.

This recipe calls for skinless drumsticks and no added sauce, but a few more tips are helpful when grilling with skin and/or added sauce:
•Do not brush BBQ sauce, if using, on the chicken until the last few minutes.
•Watch for flare ups. They often happen when the skin starts to render and the fat drips down in the grill. If you get flare ups, turn the heat to low and move the chicken away from the flames.