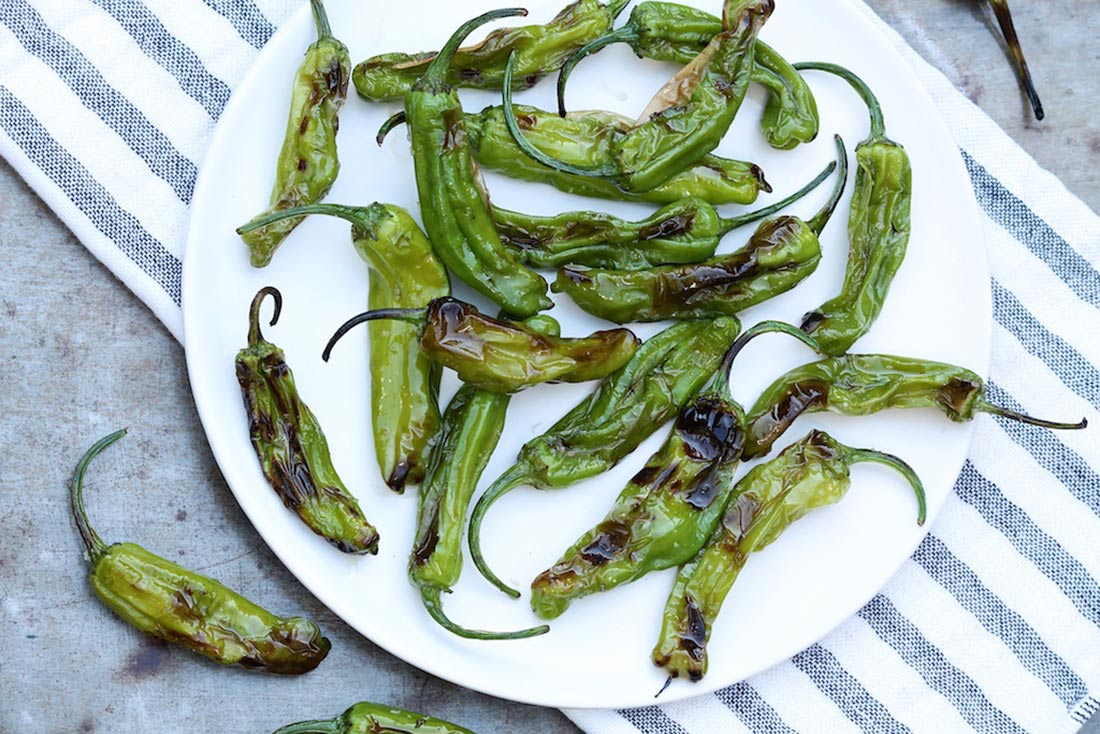 Have you ever heard of chili peppers that are mild…most of the time? Such is the case with the shishito pepper, a small, slender sweet pepper that originated in Asia.

A year or two ago, I had never heard of these thin-walled, quick cooking peppers that are beginning to pop up in farm share baskets, on restaurant menus, and in the occasional market or grocery store. The growing popularity of these flavorful peppers can be linked to their ability to be enjoyed whole—and in greater quantity than the typical hot pepper–as well as for a certain built-in fun factor.

Generally speaking, shishito peppers are mild.  Every once in a while, however, there’s a spicy renegade, and there’s no way to tell which one that might be.  At first, I predicted that the bigger peppers would deliver the heat, but that theory didn’t hold water. I lucked upon the lone spicy pepper in our first batch, and it was nothing to fear. The spice level was similar to a medium salsa.  In subsequent batches, I’ve had just two that got my attention with some added zip.

We’ve enjoyed these as an appetizer (pair with a bowl of edamame in the shell if you want to bolster the offerings while keeping it simple) and as an easy veggie side to grilled chicken and fish.  Most recently, they were a welcome complement to steak and corn on the cob.

A final word of advice: buy more than you think you’ll need as they disappear quickly! For a steady supply, you may even try planting these in your garden next year.

For locals, my source for these peppers has been Brooklawn Farm Market on Lititz Pike. They are growing shishito peppers for the first time this summer, so they are assessing the yield as the summer progresses. Kegel’s Produce Playground on Old Tree Drive recently stocked the peppers. (Call ahead to verify availability on any given day.) Stauffer’s is planning to carry these peppers for a limited time. I also spied them on the menu at Luca, a new restaurant on James Street, and have heard from readers who have received them in their weekly farm share boxes.

If you can’t find shishito peppers, or their Spanish cousin Padrón peppers, look for the widely available mini bell peppers or varieties that Brooklawn calls seasoning peppers. These will offer a range of flavor—with no spicy surprises–and although different than the shishitos, their vibrant colors and diminutive size make them an equally appealing side dish. Unlike their full-size counterparts, they have practically no seeds so can be cooked whole. (Try skewering them for added ease on the grill.) Follow the instructions for the shishito peppers, adding a few minutes to the grilling time, as needed, to account for variations in the thickness of the pepper walls. 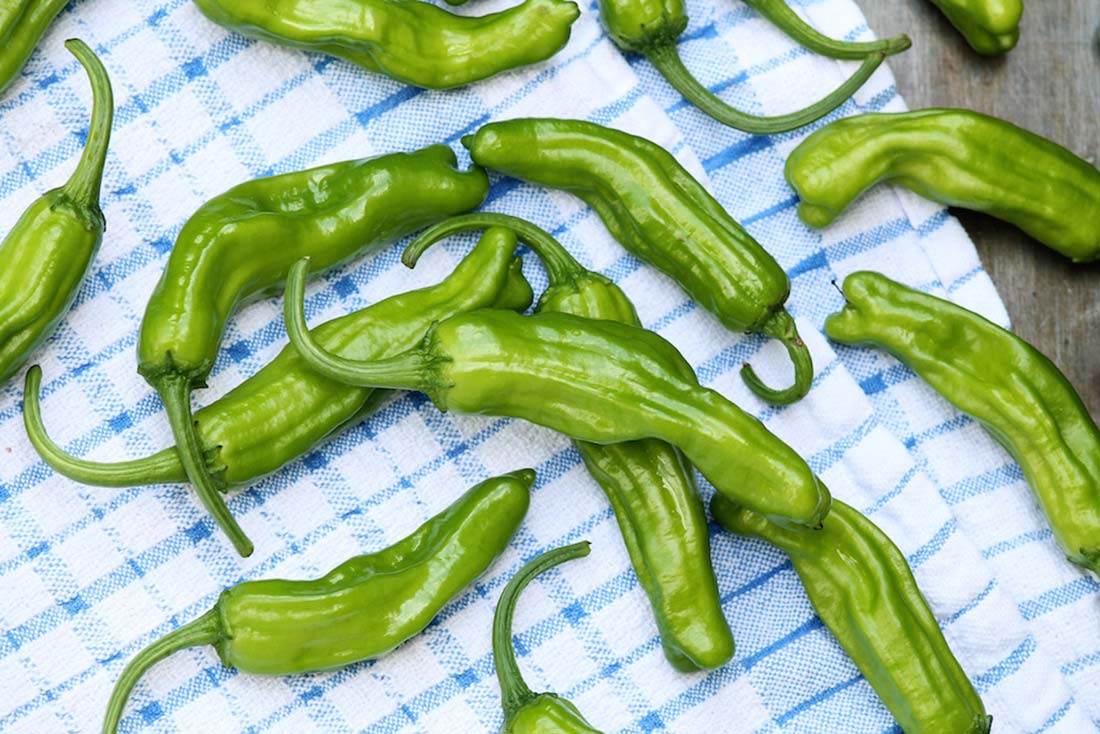 Shishito peppers are the Japanese cousin to Spain’s famed Padrón peppers. Delicately sweet and usually mild, they’re an easy snack to throw on the grill.  One in ten, on average, has a spicy kick, but the guessing game adds to the fun.

You can use either Japanese shishito or Spanish padron peppers for this dish. They look nearly identical and both have a mellow, slightly sweet flavor — except for the occasional spicy surprise! 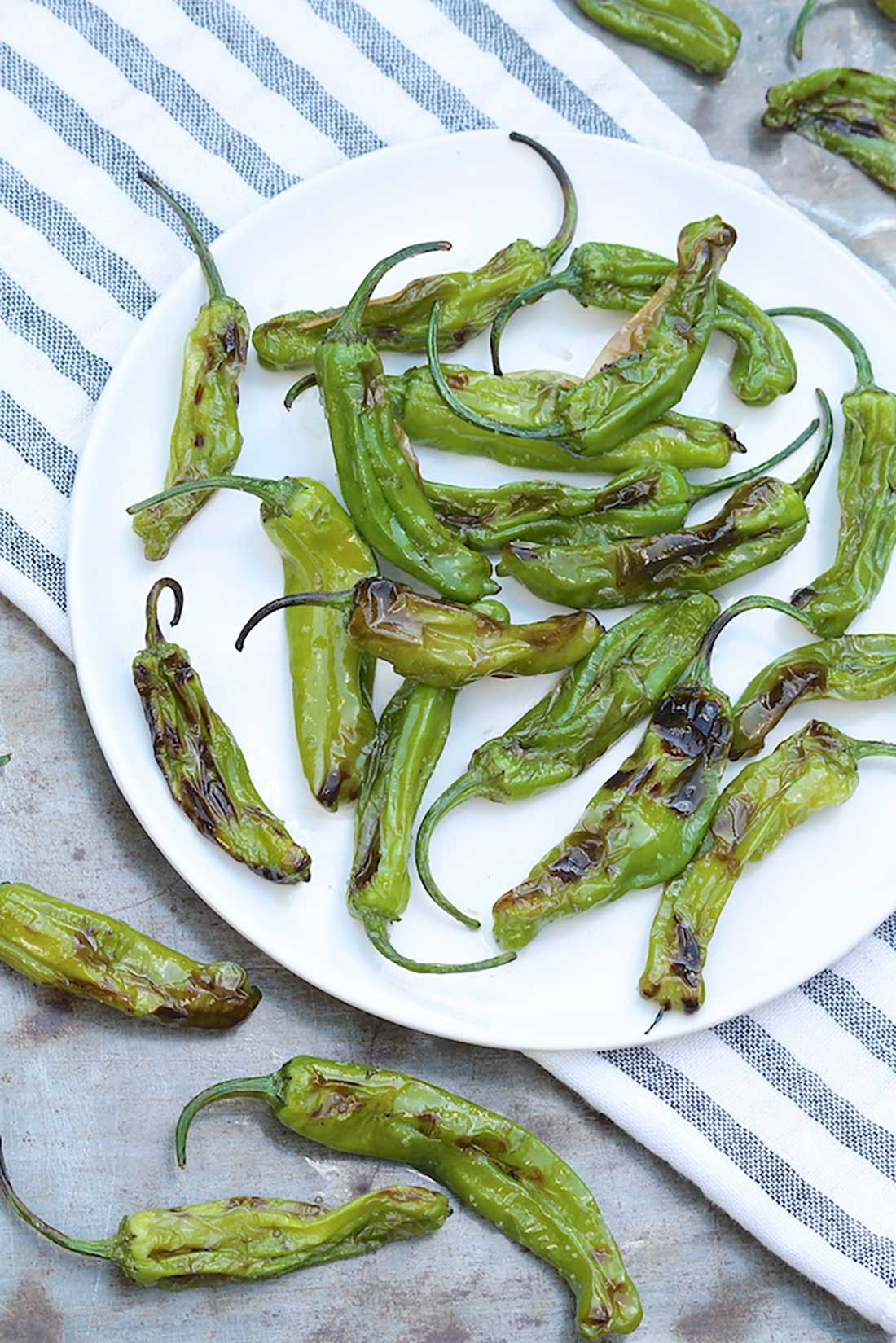 The preparation couldn’t be simpler, and the flavor delivered by these little peppers is fantastic.