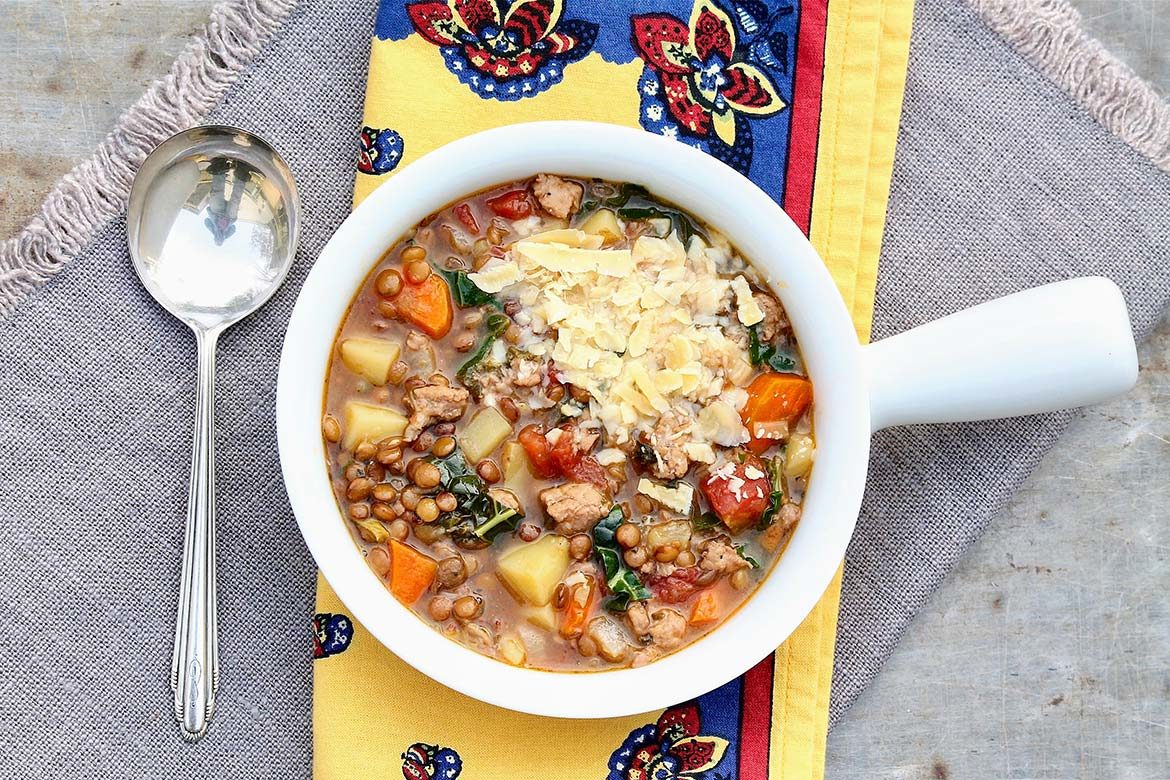 A hint of sausage supplies smoky, savory flavor in this one-pot soup, which is packed with plant-based protein, colorful veggies and satiating appeal. Wholesome comfort food at its best－and a customer favorite at a regional restaurant chain!

It never fails. When one of my sons issues a last-minute request for a friend to stay for dinner, it never seems to be mac and cheese or spaghetti night. On the heels of enduring black bean spaghetti stir-fry—which went over shockingly well–one special friend recently appeared as I was ladling lentil soup into bowls.

I have enough history with this friend to know that his favorite soup is a decadently creamy and cheesy tomato variety that he frequently orders at a favorite local restaurant. So a legume-based soup with its fair share of vegetables had the potential to send him back to his house for a better option.

As it turns out, I had been tweaking my lentil soup recipe in anticipation of Get Soup! Give Soup!, an annual campaign run by Isaac’s Restaurants throughout the months of January and February.  All of Isaac’s 18 locations choose a soup kitchen, shelter, food bank, or other non-profit that helps the hungry and homeless in their community. Then, for every 100 cups of soup sold, a gallon of soup is donated to the chosen organization. (They tally the number of cups in bowls and takeout orders, so count those, too.)

Since the campaign’s inception in 2014, 2,350 gallons of soup have been donated across South Central Pennsylvania. Some stores are able to donate soup to more than one partner thanks to the tremendous customer support of this campaign. Importantly, the soup is distributed on a weekly basis throughout these cold winter months, when so many really need a hot, wholesome meal.

As the folks at Isaac’s were planning for this annual event last fall, they asked me if I would be willing to provide a soup recipe for them to feature on their menu. The primary request was that the new soup be healthy and hearty. Could I maximize protein without adding empty calories? Specifically, the hope was that each bowl or cup would provide at least 10 or 5 grams of protein, respectively, and that wholesome ingredients like lentils and kale could be incorporated in a delicious way. More than ever, restaurant patrons are seeking out healthy menu items that leave them feeling full, and this desire is typically heightened in the post-holiday season.

In our house, the popularity of this filling soup has less to do with grams of protein and more to do with taste. And I’m happy to report that my son’s friend agreed. When I asked him if he might order it at Isaac’s, where it will be a menu feature over the next few months, he said he just might. Luckily though, whether he chooses his favorite cheesy tomato soup or this Tuscan lentil option, people who truly need a hot meal will benefit.

To help support Isaac’s Get Soup! Give Soup! partnerships, simply enjoy a serving of your favorite soup—or this new-to-the-menu Tuscan lentil option–at any of the restaurant’s 18 locations. All soup sales, whether dine-in or takeout, will be applied to this effort now through the end of February. 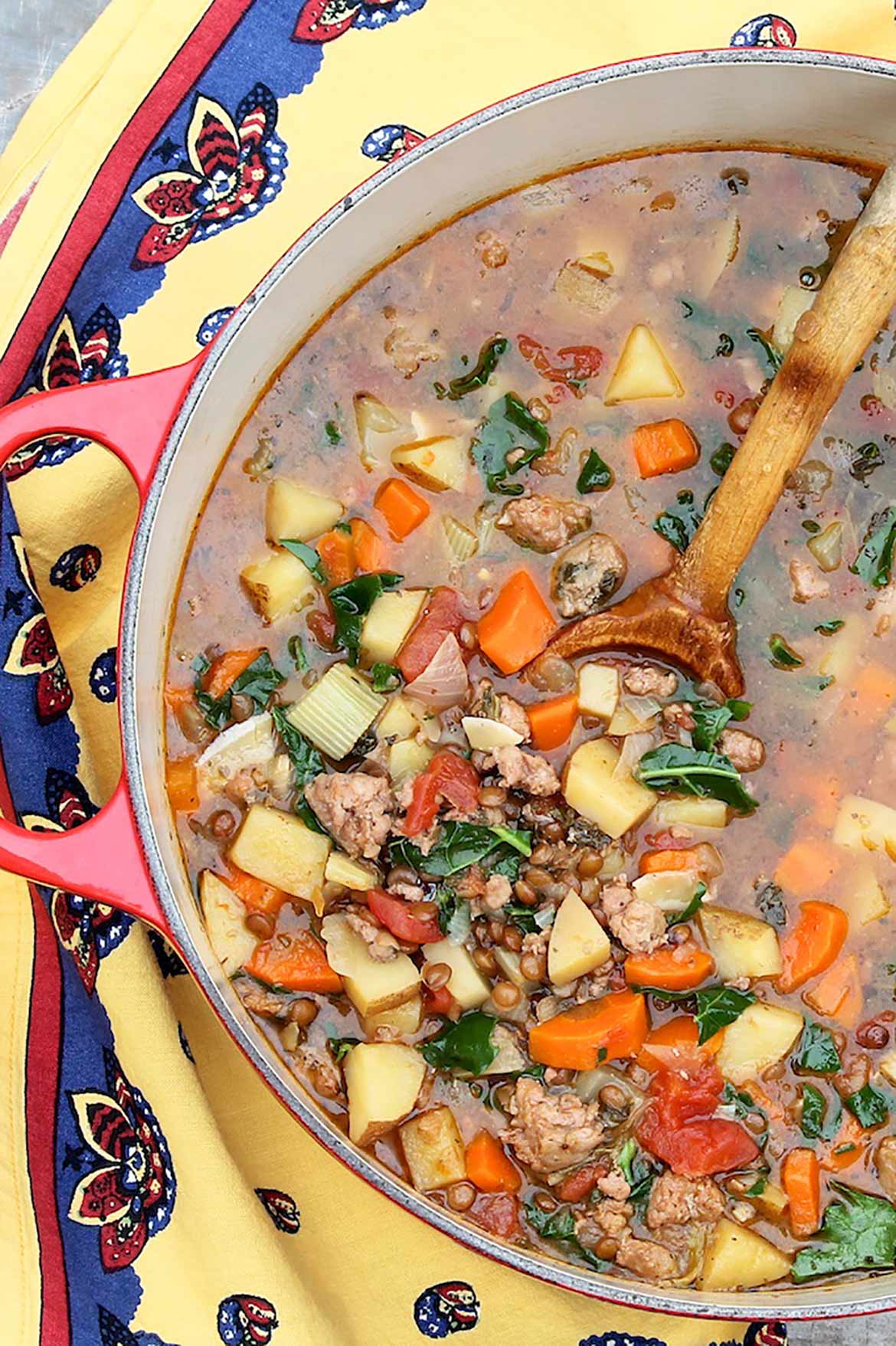 So what exactly does “Tuscan” mean?  Tuscan food is based on the Italian concept of cucina povera, or “poor cooking,” and includes simple, inexpensive meals that can easily be made in large quantities. Tuscan cooking doesn’t rely on complex seasonings or fussy preparation. It’s prepared with fresh, quality ingredients that bring out the natural flavors in a dish. 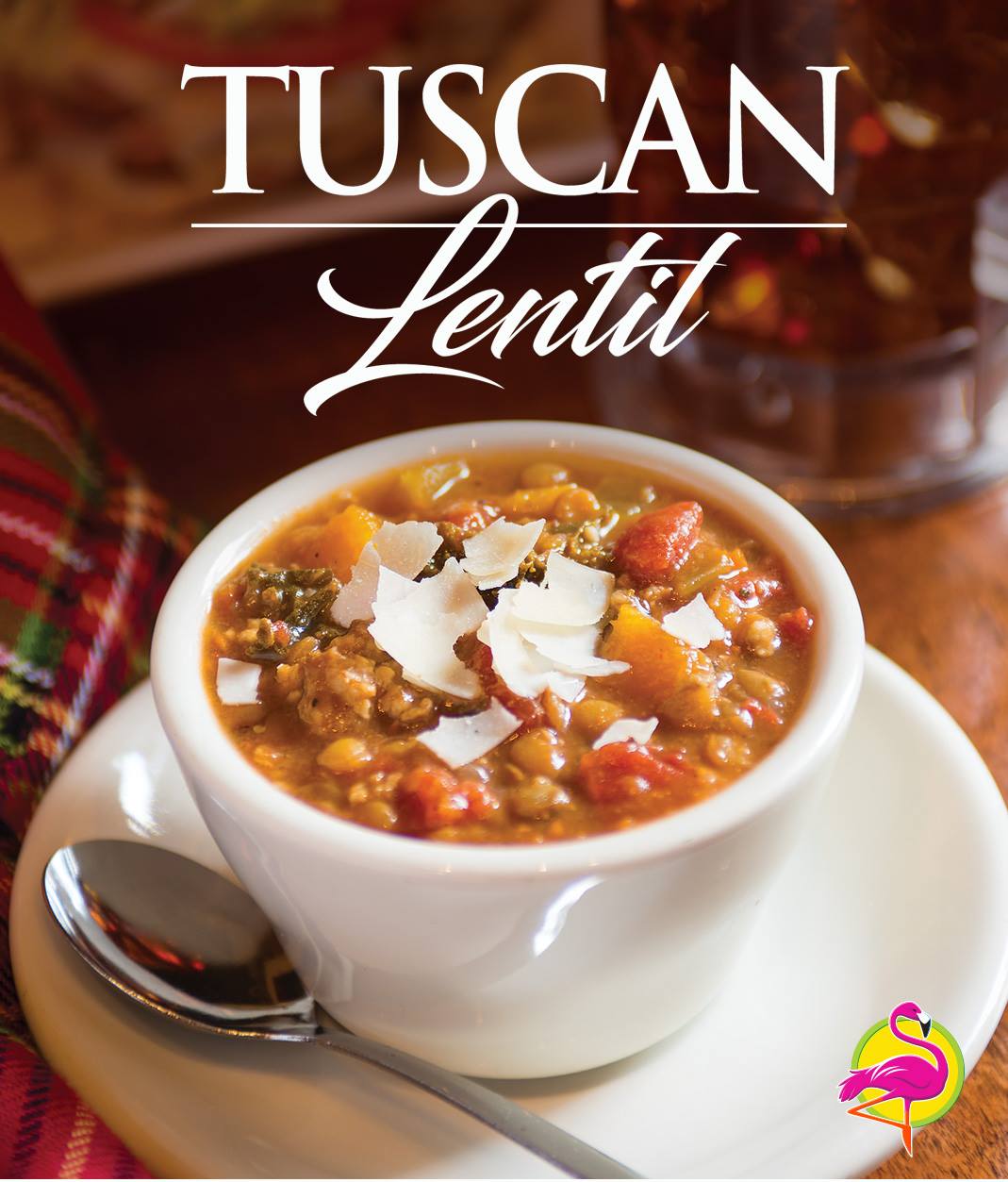 For up-to-date information on Isaac’s Get Soup! Give Soup! campaign－and where to buy a cup of my soup!－visit Isaac’s Facebook page. 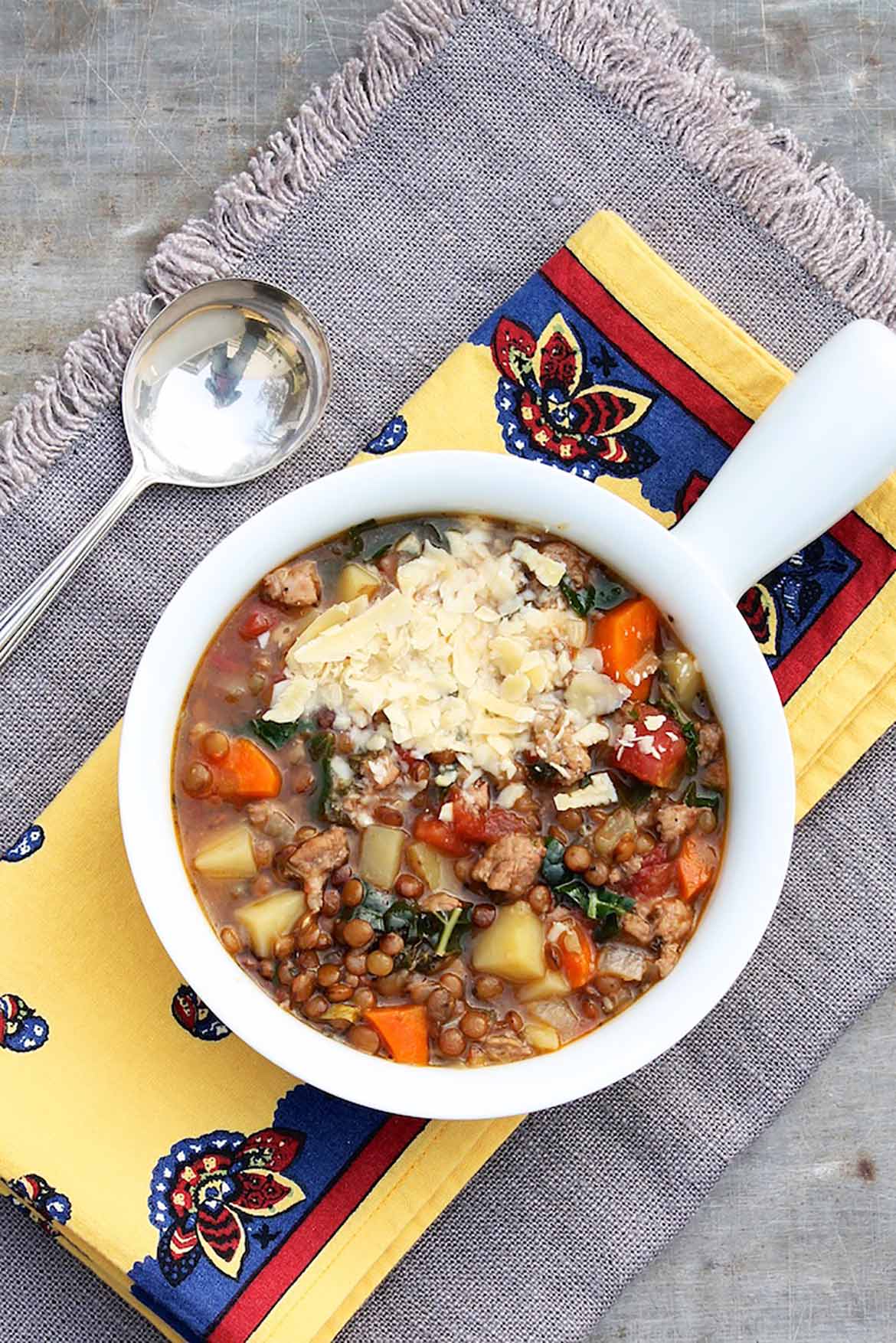 The subtle hint of acid provided by the balsamic vinegar rounds everything out at the end.  Freshly grated or shaved Parmesan is the perfect finishing touch. Leftovers are more stew-like as the lentils continue to absorb the broth, although the flavor gets better and better.  Additional chicken broth may be added if desired. 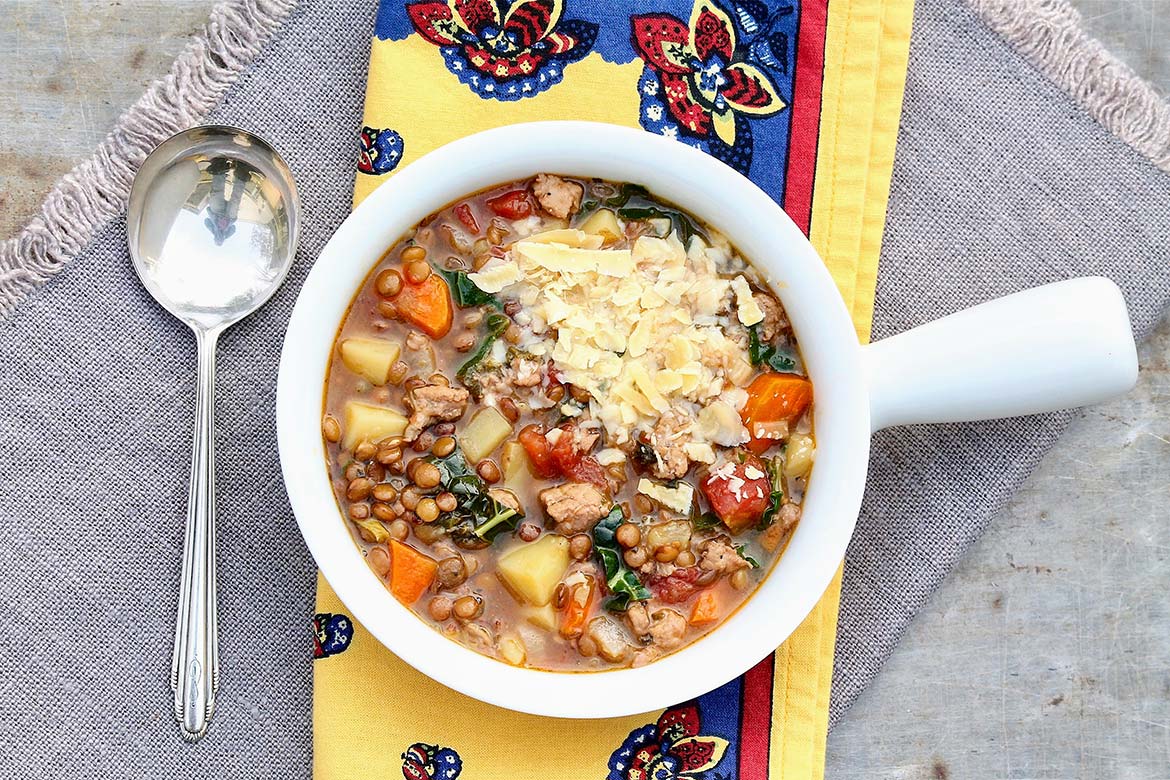 Tuscan Lentil Soup
Yield: 6-8 servings
Don’t be turned off by a seemingly long list of ingredients, as much of the prep can be done in advance. I often chop the veggies earlier in the day and store them in the fridge in leftover produce bags or airtight containers. The recipe also makes a big batch, so there’s plenty for another night or lunches throughout the week－or you can freeze a container if you prefer.
Print
Ingredients
Instructions
Notes
Tried this recipe?Post a picture on instagram and we will repost it! Mention @fountainavenuekitchen or tag #fountainavenuekitchen!
The Fountain Avenue Kitchen https://fountainavenuekitchen.com/