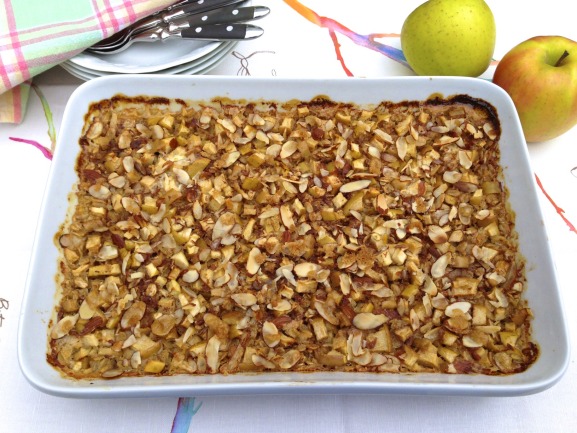 By now, my love of baked oatmeal has been well established.  Truth be told, I hold back some of my variations because I don’t want to over-oatmeal people.  I think the time has come, however, to release another!

My sister-in-law, Melissa, is to thank for this delicious creation.  She is a nurse who leaves early for work and likes to bring her breakfast with her to eat while on break.  She thought a combination of my blueberry coconut almond baked oatmeal and crunchy top apple and cinnamon oatmeal would be perfect for her in terms of flavors and quick prep.  This recipe is fruitier than my original apple cinnamon baked oatmeal and does not require the “soak” time. When I eat this version, it truly reminds me of a healthy apple crisp, hence the name.

By the way, when Melissa makes this, she prepares it the night before and takes the whole baking dish to work to share with her coworkers.  Wouldn’t you love to work with her?

Note to all the quinoa fans out there:  A couple of times, I have experimented with this recipe, using a combination of quinoa and oats.  For our tastes, 1 3/4 cups oats and 1/4 cup quinoa (both uncooked) is the perfect combination.  My kids don’t really notice a difference but I detect a hint of nuttiness.  I have gone as high as one cup oats and one cup quinoa and recommend this for the true quinoa fans.   In that case, I prefer a layer of bananas underneath (as described below) which will serve as a good base for the somewhat looser quinoa grains.

Also, a special thanks goes out to my dear friend, Jen.  She noticed that I often strategically place a tea towel or napkin in my photos–this is my way of improving the picture!–and she gave me the pretty one in the photo above.  For those who used to watch The Cosby Show in the 80’s, I told her I will be to tea towels what Bill Cosby was to college sweatshirts!  Ok…I just really dated myself there.

Apple Crisp Baked Oatmeal
Sometimes, I line the bottom of the pan with a couple of bananas, sliced into coins. Serve warm, as is, or with a dollop of Greek yogurt or a drizzle of warm milk, if desired.