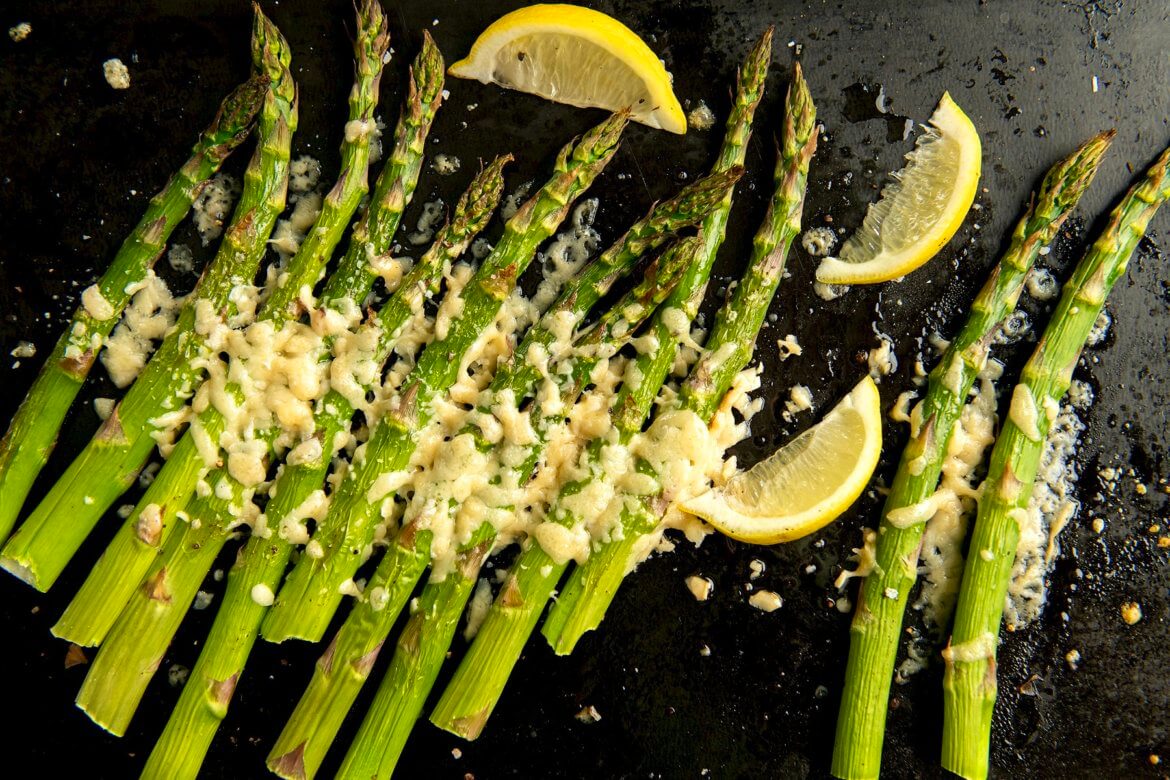 Asiago cheese provides a delightful alternative to Parmesan, adding a unique twist to simply roasted asparagus. Any crispy bits of cheese sticking to the baking sheet are a special treat!

No doubt, Parmesan cheese is a dependable workhorse in the kitchen. From chicken Parm and pesto to risotto, Italian-style soups, and even popcorn, versatile Parmesan adds flavor to a seemingly endless list of foods.

Its shelf life is long, and the flavor has wide appeal. Who doesn’t love a dusting of this aged nutty cheese atop a plateful of spaghetti and meatballs?

The two cheeses are similar enough to be interchangeable in many instances. At the same time, the flavor profile of Asiago will bring something just a bit different to the table.

Asiago’s Italian roots can be traced back to the 10th century and the village of Asiago d’Allevo, which is northwest of Venice and still exists today. The area was known for its pastures, where sheep grazed freely. Not surprising, wool and cheese were the main commodities.

By the 15th century, cattle began replacing the sheep. Eventually, cow’s milk became the standard ingredient in the production of Asiago cheese, an evolution that remains the standard today.

Like many cheeses, Asiago is sold at various degrees of maturity. So, what does that mean in terms of taste and texture?

The Italian cow’s milk cheese has a flavor reminiscent of Parmesan, but it’s somewhat nuttier and creamier. The cheese if often described as buttery and, occasionally, fruity.

When fresh, Asiago is semi-soft and mild flavored. When aged for upwards of 9 months, the texture becomes harder and somewhat crumbly, and the flavor becomes sharper.

When removed from its wrapper, the aroma is strong. But don’t let that pungency scare you away!

When cooking for a small group recently, several in the crowd assumed they wouldn’t like the cheese based on its smell. When they tasted the following asparagus recipe, however, to which the cheese had been added and briefly broiled in the final minute or two of cooking, they were pleasantly surprised.

In fact, few of the cheesy spears were left for dinner, as they were eaten as finger food right off baking sheet! (Fun fact: the lemon strategically filling the gap in the top photo reveals where sticky fingers were before the photos were finished!)

Much like Parmesan, Asiago cheese can be grated on pasta, pizza, and salad. It’s rather tasty eaten alone as well.

When making a cheese plate with a soft, medium, and hard cheese, Asiago serves as a lovely choice for the latter. 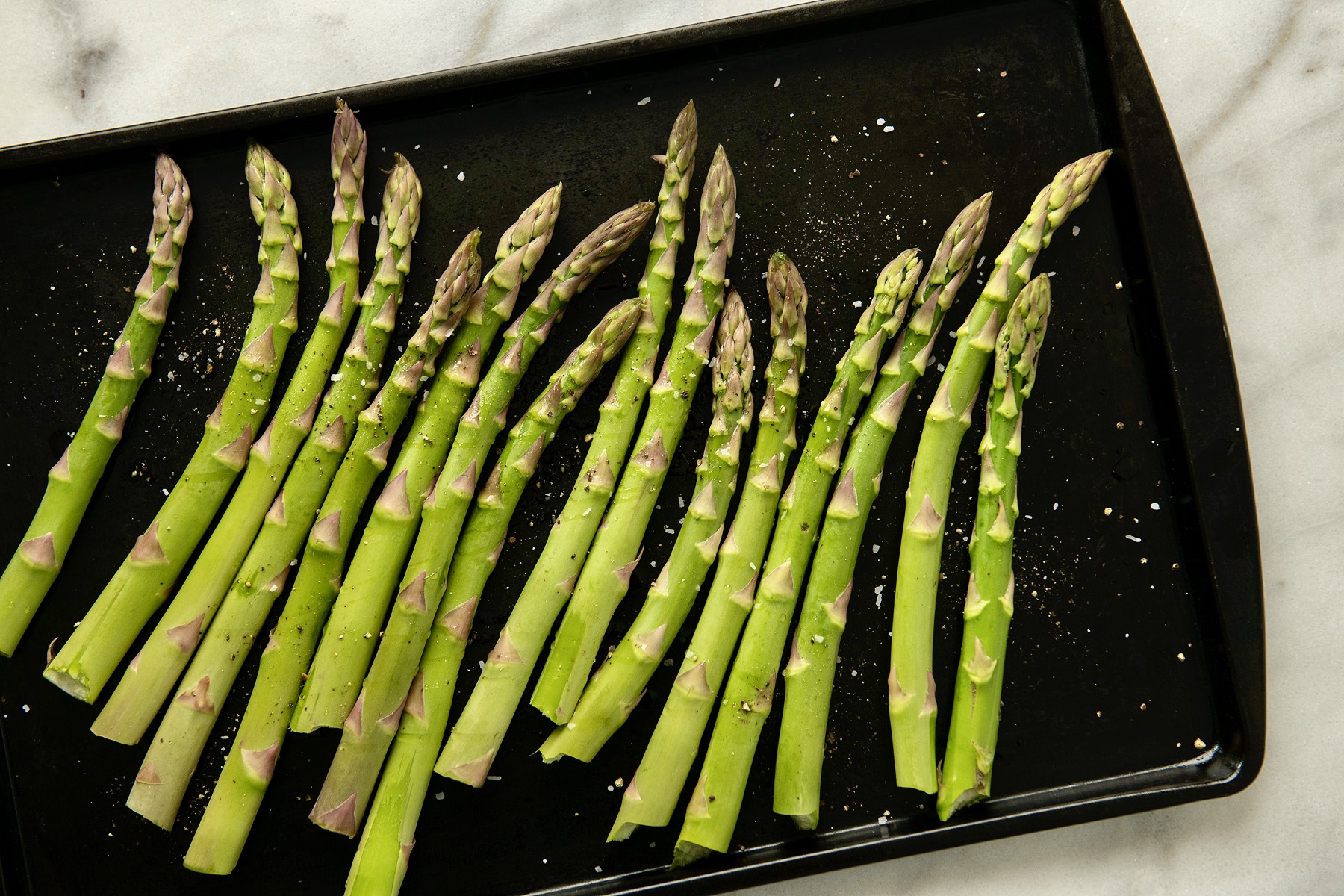 A very light coating of oil and a sprinkle of salt and pepper are all that the dry, trimmed spears need to start. 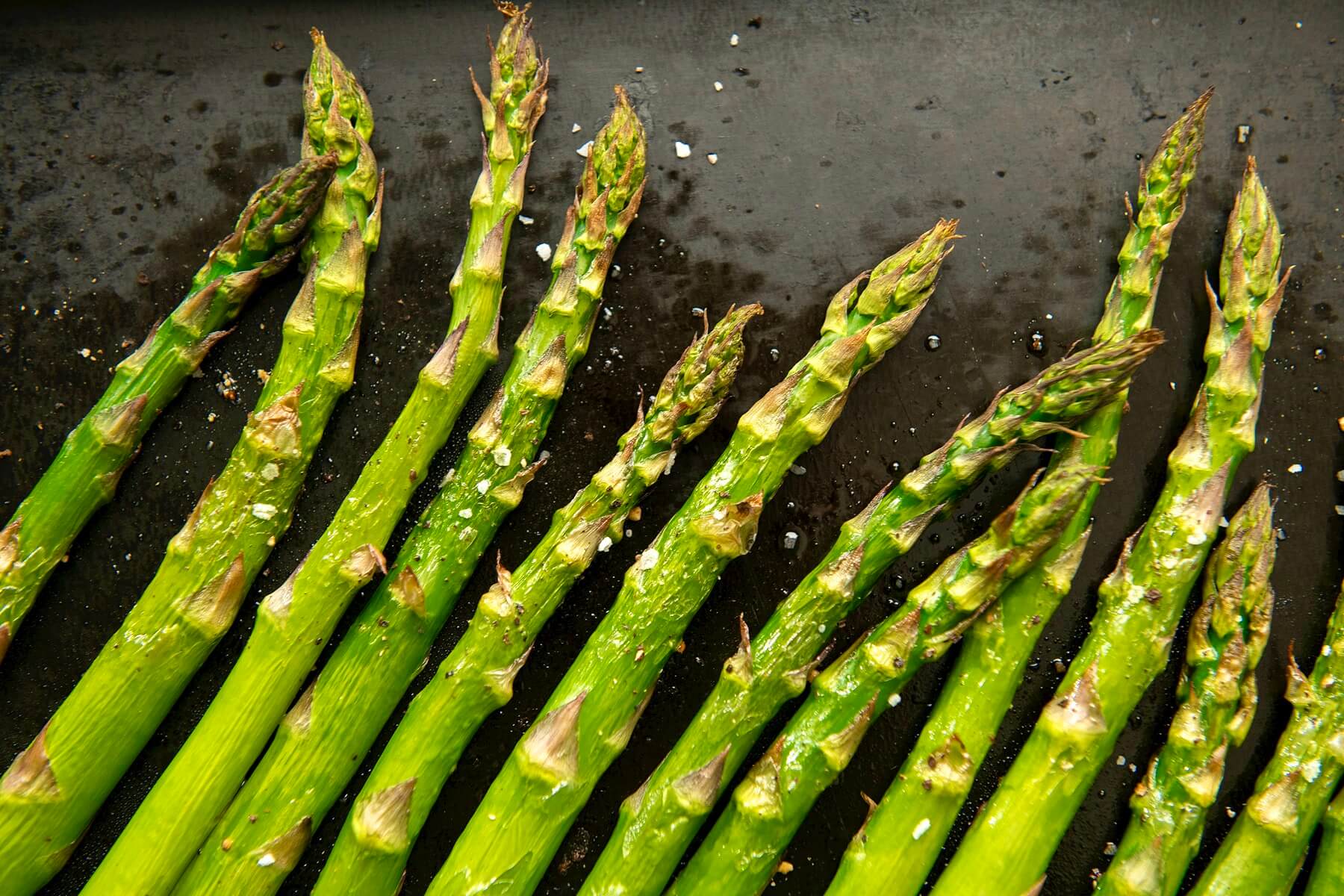 Roast the spears until just short of done… 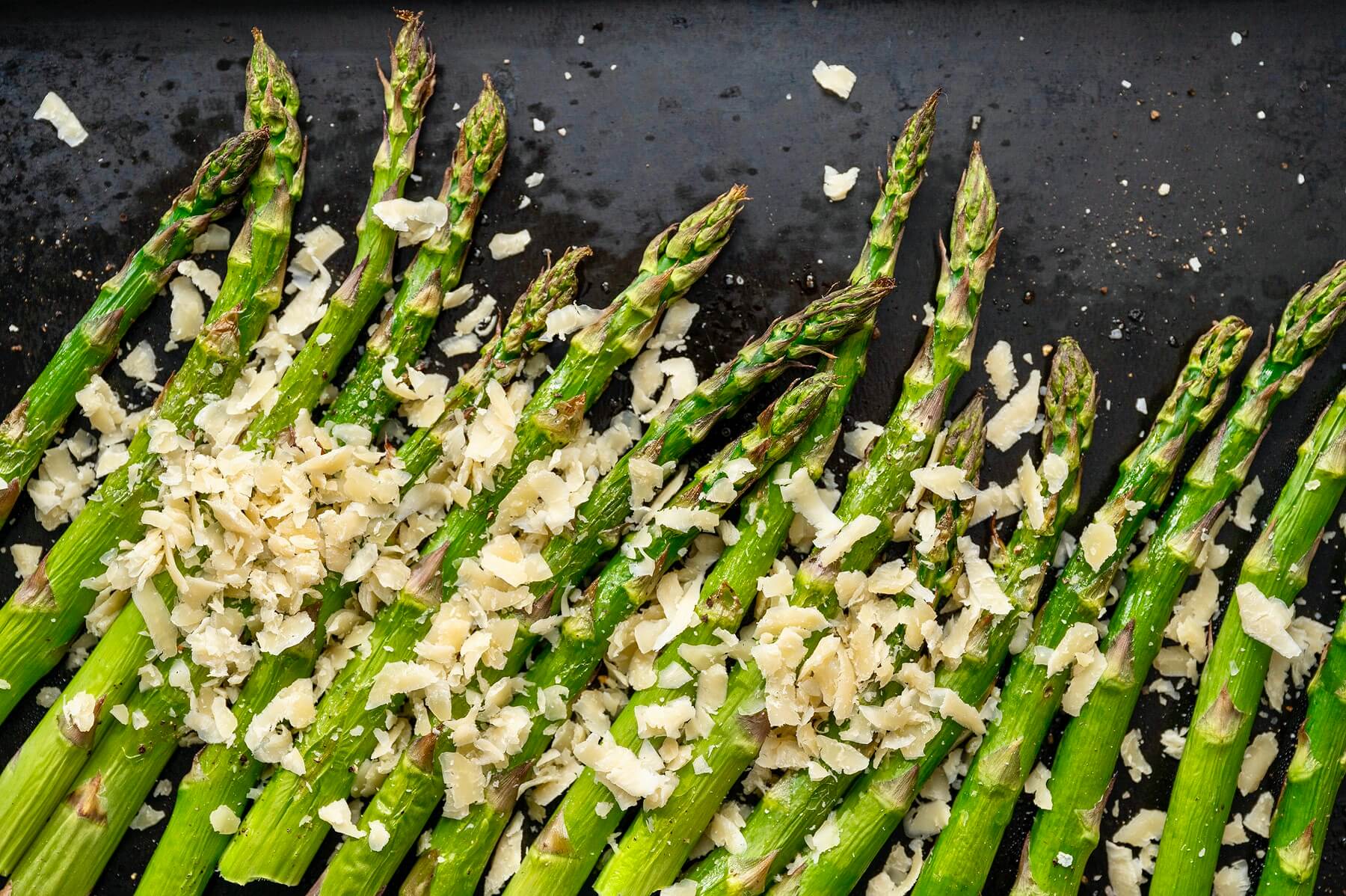 …and then sprinkle with the cheese and broil just long enough to melt and lightly brown. (Note that parchment paper is not advised as it will likely catch fire under the broiler. If you’d like to reduce cleanup, line the baking sheet with foil instead.) 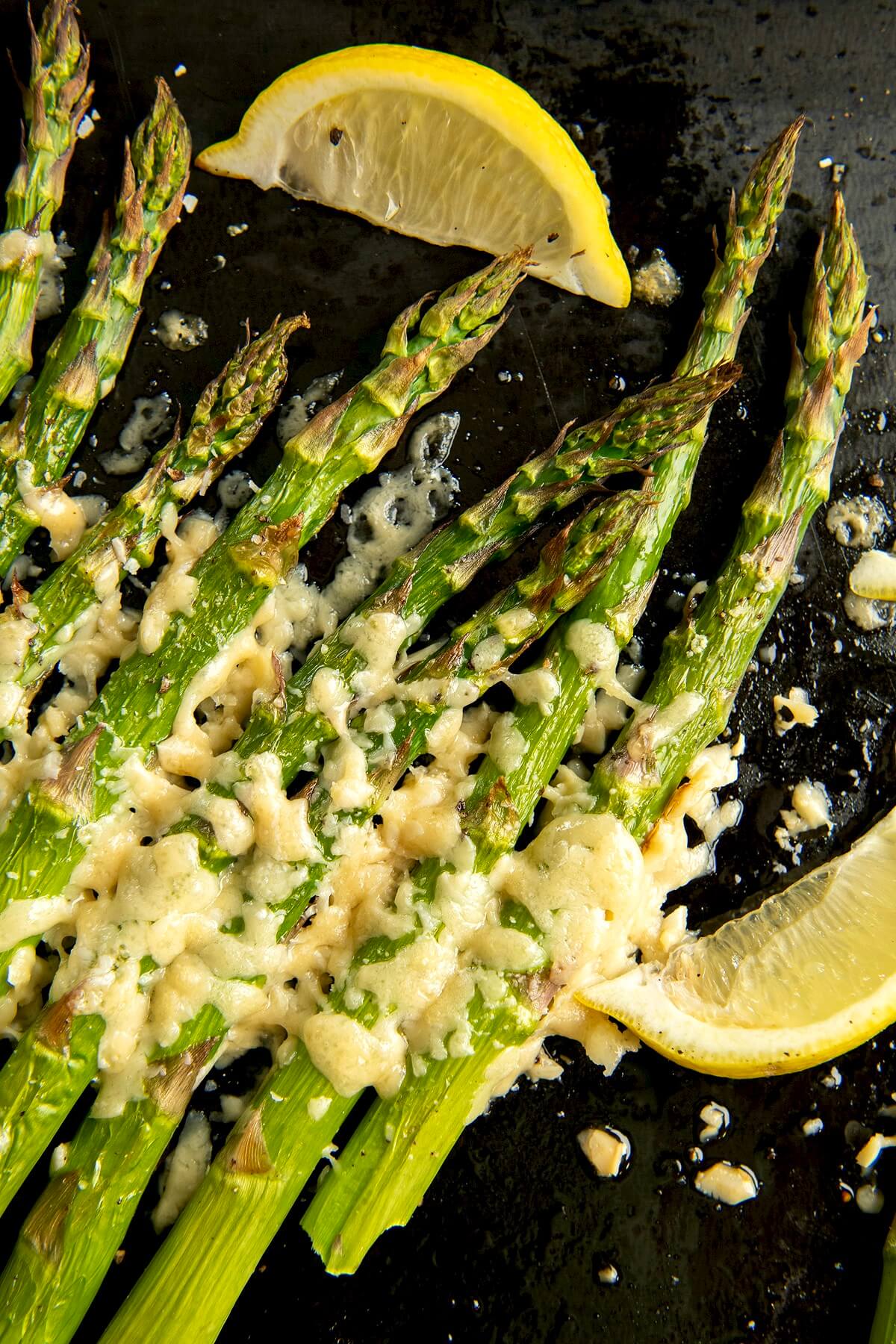 A squeeze of lemon is optional. 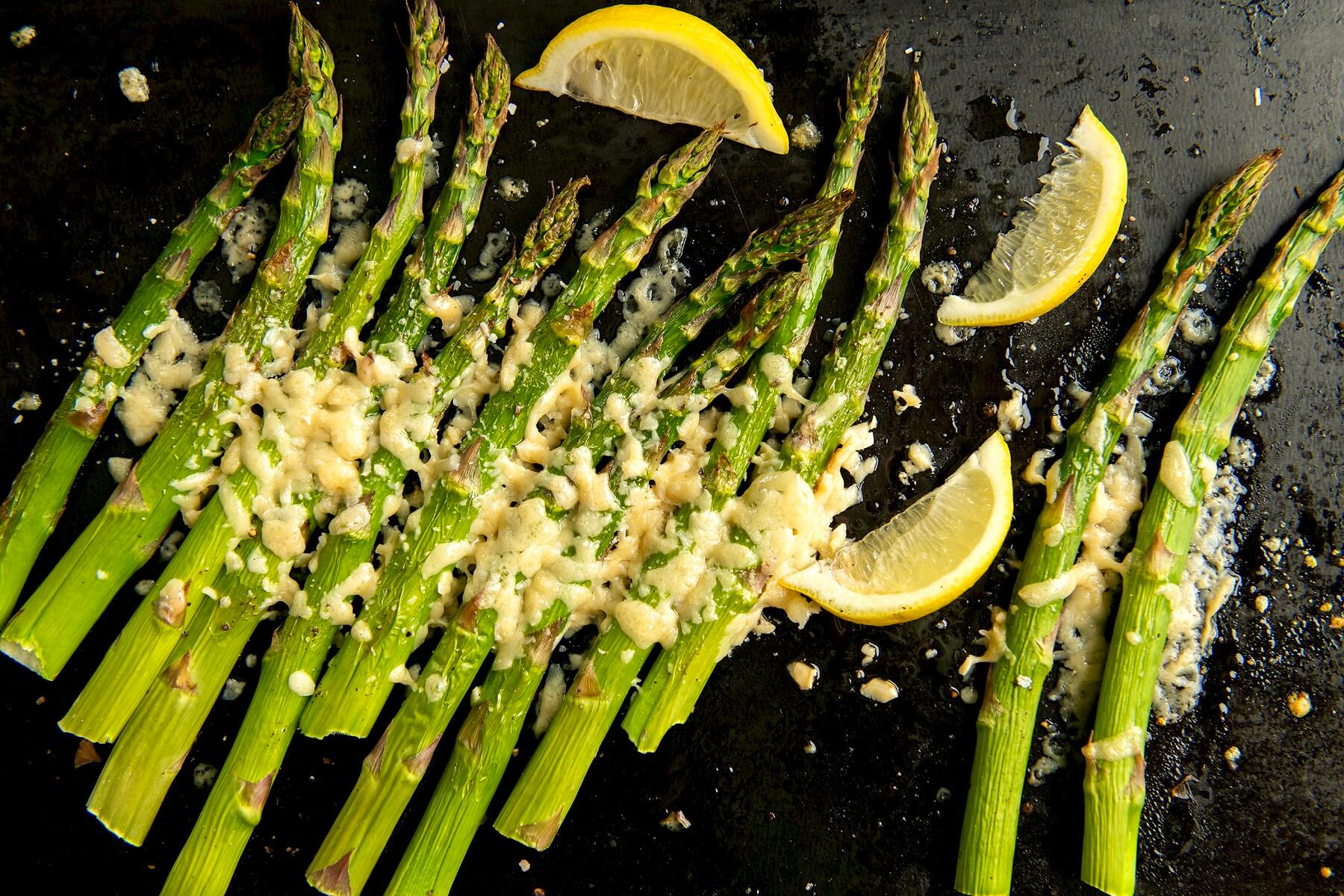 Asiago Asparagus
Yield: 3-4 servings
Asiago cheese provides a delightful alternative to Parmesan, adding a unique twist to simply roasted asparagus. So easy and so flavorful!
Print
Ingredients
Instructions
More On YouTube More on Instagram
Tried this recipe?Post a picture on instagram and we will repost it! Mention @fountainavenuekitchen or tag #fountainavenuekitchen!
The Fountain Avenue Kitchen https://fountainavenuekitchen.com/