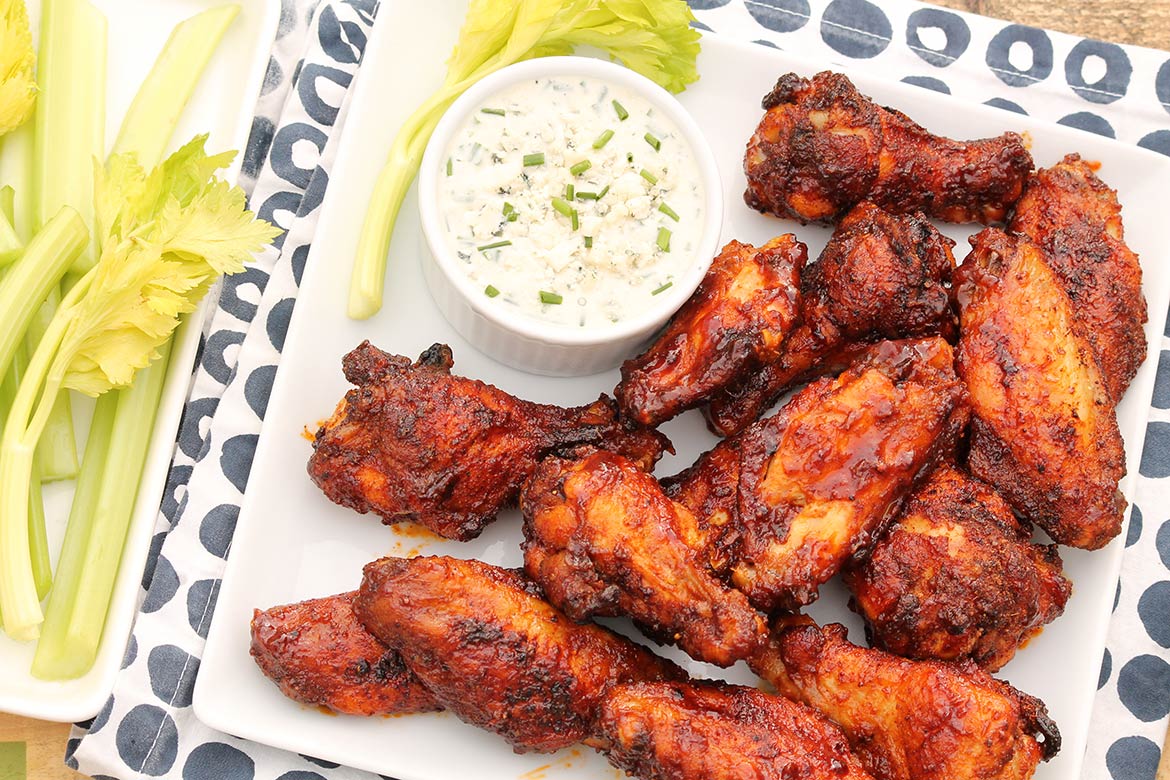 It’s likely no surprise that Super Bowl Sunday is the busiest pizza takeout day of the year. Pizza is consistently ranked as one of the most popular game day foods, along with chili, guacamole, nachos, and subs.

Chicken wings are a clear party favorite, too, as evidenced by the 90 million pounds (or 450 million individual wings!) estimated to have been consumed during Super Bowl L in 2016. From mild barbecue to super spicy buffalo, these handheld morsels offer something for every palate.

With their signature crispy skin, chicken wings happen to be a year-round favorite in our house. If I ever want to brighten my younger son’s day, I need only to announce that the following recipe is on the menu.

Though typically enjoyed as an appetizer, I usually make a fun dinner out of these. The yield is perfect for a family of four, although I try to stealthily reserve a few pieces to tuck in his school lunch the following day.

The instructions may look involved, but they’re really quite easy and include sauce variations to appeal to various palates or to sample over time. Conveniently, most of the prep can be done in advance, and there’s even a simple secret to achieving crispy skin: refrigerating the seasoned wings, uncovered, gives the skin a chance to dry out, and dry skin equals crispy skin. Overnight is best, but even a few hours of drying time will help. 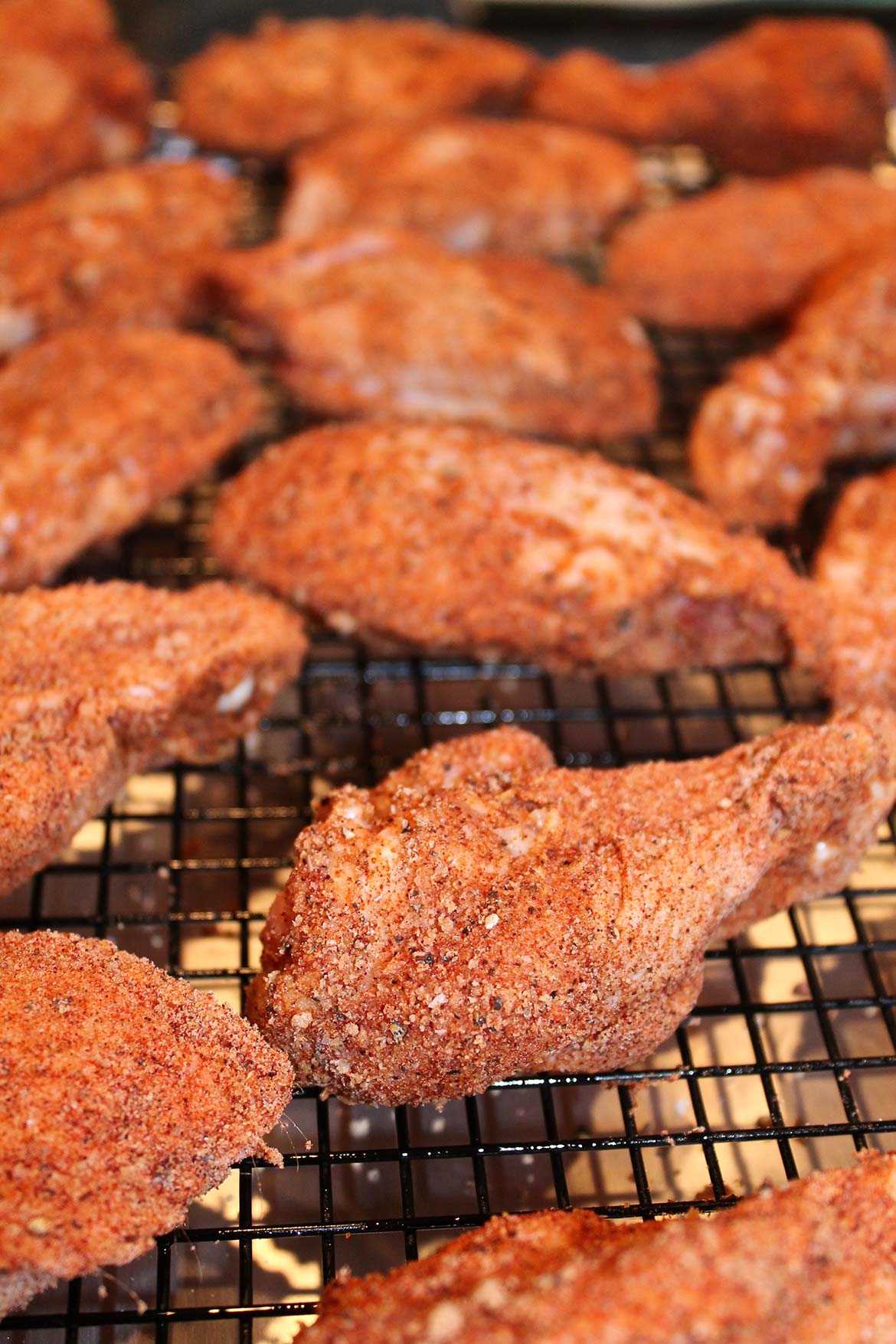 The flavorful rub includes baking powder, which helps to further dry and crisp the skin. This mixture can also be prepared in advance, and I typically mix several batches at a time to have on hand. 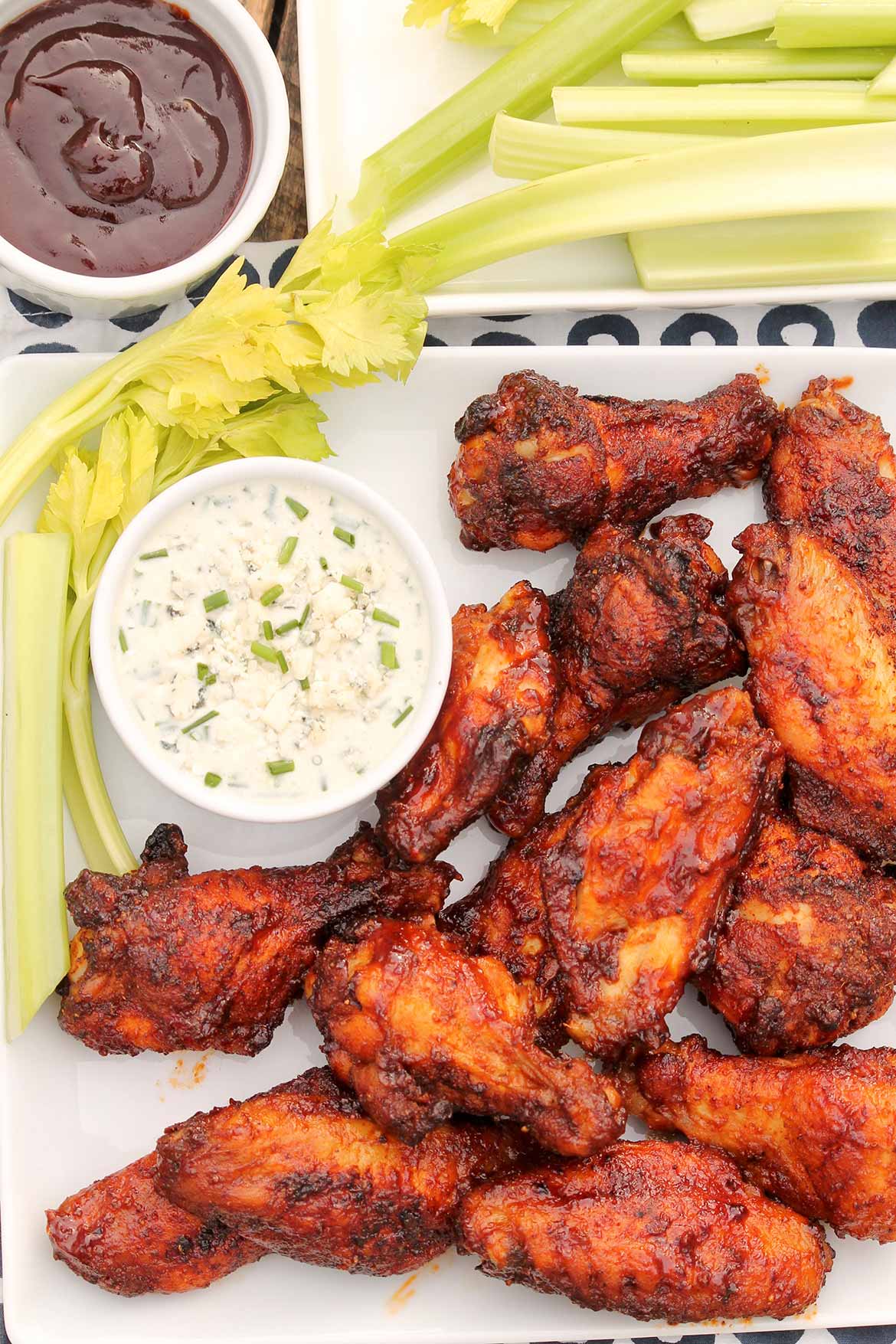 So you can quiz family and friends while noshing on your favorite game day foods, I’ll leave you with a few fun facts: 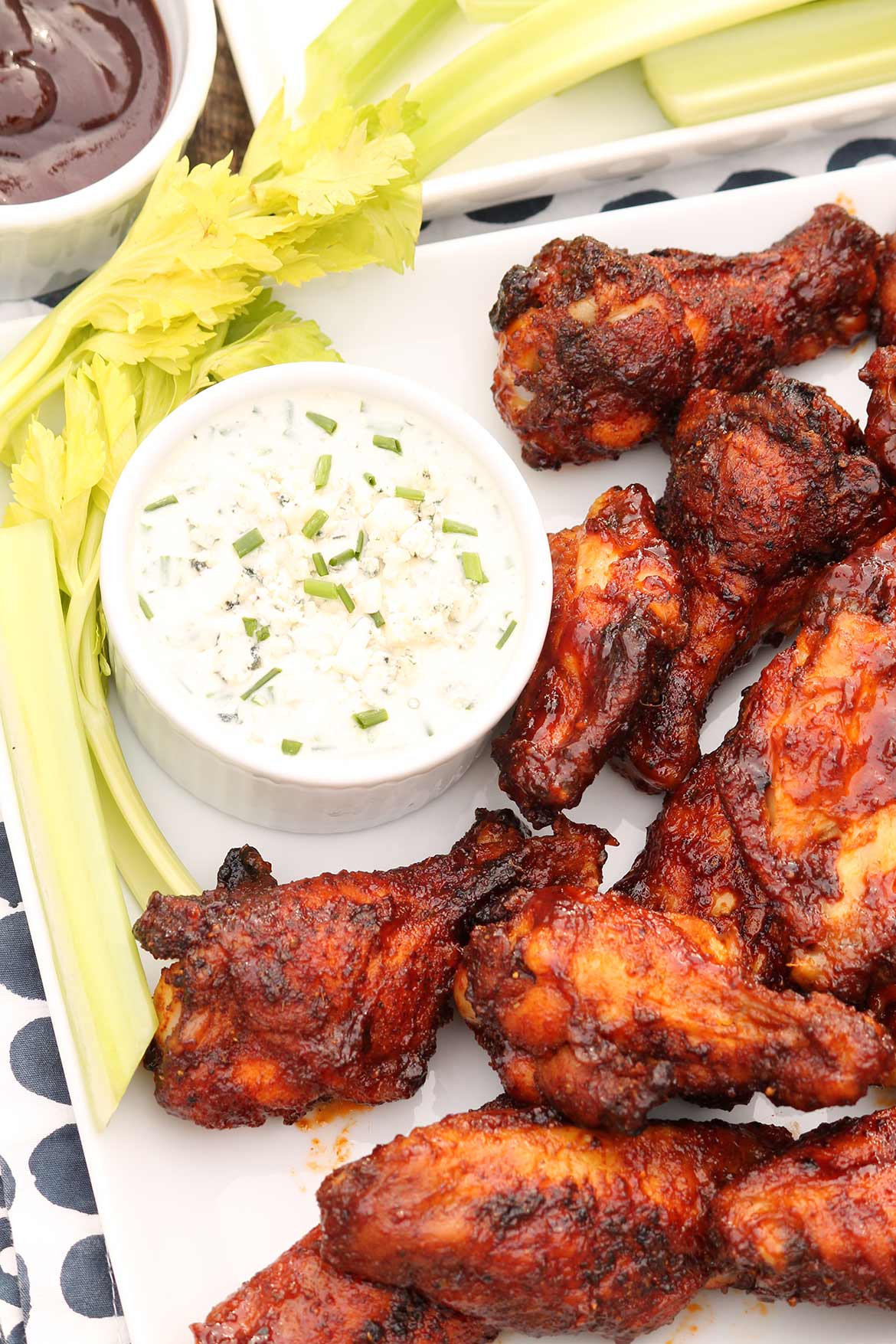 Crispy Buffalo Wings
Prep Time: 5 min
Cook Time: 50 min
Total Time: 55 min
Yield: 4 main dish or 6-8 appetizer servings
I recommend reading through the directions in advance to choose your sauce and discover the many prep ahead options. I’ve run side-by-side comparisons with the sauces and there’s never a consensus on a favorite. The second option is my personal favorite; the last one is the quickest if that helps you decide.
Print
Ingredients:
For the Spice Rub:
For the Traditional Buffalo Hot Wing Sauce (hot but not on fire):
For the Sticky Honey Buffalo Sauce (mild heat with adjustments):
For the Bare Bones Basic Sauce:
Directions:

In a small bowl, mix the spice rub ingredients.  This may be done well in advance and stored in an airtight container. (It will keep for several months.)

In a different bowl, if making the Traditional or Sticky Honey Buffalo Sauce, mix all of those ingredients except for the butter. This may be done up to a few days in advance and stored, covered, at room temperature. If making the Bare Bones Sauce, you can simply mix all of the ingredients together and pour the sauce over the wings at the end. If you prepare this sauce ahead of time, the melted butter will cool, so rewarm gently in the microwave or on the stovetop before using.

Line a large baking sheet with foil for easy cleanup. Place a baking rack or ovenproof cooling rack on top of the foil, and brush or spray liberally with oil.  (The rack allows the air to circulate, really helping to dry out the skin on both sides of the wings.  If you do not have a rack, grease the foil and turn the wings halfway through the cooking time.)

Place half of the wings in a large zip-top bag. Sprinkle with half of the spice rub and shake until coated evenly. Place the wings on the prepared baking rack so they are not touching. Add the remaining wings to the bag, sprinkle with the rest of the spice rub, shake to evenly coat, and place on the baking rack. If you have an over-sized bag, you could coat all the wings at one time. (Tip: For crispiest skin, refrigerate the wings once they’ve been placed on the rack, uncovered, overnight if possible or at least several hours.)

When ready to cook, preheat the oven to 400 degrees F.  Bake the wings in the upper middle portion of the oven for 45-50 minutes. (If the wings are cooked but you would like them to be a little browner, move the oven rack approximately 6 to 8 inches from broiler and briefly broil. Flip the wings and broil the other side.  Watch very closely so the wings don’t burn.  The need for this will vary based on oven and personal preference. I like to broil just the side that has been face down on the baking sheet for a minute or two.)

If using the first or second (Traditional or Sticky Honey Buffalo) sauce: Immediately after removing the wings from the oven, melt the butter in a small saucepan over medium heat. (Tip: to keep the sauce from becoming too thick, do not simmer it until you are about ready to pour it over the cooked wings.) Add the remaining sauce ingredients and bring to a simmer, stirring occasionally. Reduce the heat to low and cook until slightly thickened, stirring often, approximately 3-4 minutes.  (Take care not to overcook the sauce and make it too thick.)  At this point, you may taste and add additional hot sauce for a spicier sauce or more honey for a sweeter sauce.

Place the cooked chicken wings in a very large bowl, and pour the sauce evenly overtop. (Depending on how liberally coated you like your wings, you may wish to reserve some sauce to serve on the side.)  Gently toss the wings until evenly coated.  Serve with optional dressing and/or celery and enjoy!

*For proper ratios of spice rub and sauce to wings, rely on starting weight of wings rather than total number of wings. You can typically buy them already separated into wingettes (flats) and drumettes; but if starting with whole chicken wings, remove the tips of the wings and discard or save for making stock. Then, using a sharp knife or kitchen shears, separate the wings at the joint. I can usually just fit the wings on my largest sheet pan and rack but sometimes need a second smaller pan if the wings won’t fit in a single layer.

Years ago, when I was researching ways to keep chicken skin crispy, I struck upon this recipe with an interesting tip from Jen at Carlsbad Cravings.  Jen noted that the baking powder draws moisture from the surface of skin, breaks down proteins within the skin, and accelerates the browning process resulting in crispy, baked wings…but all you taste is the flavorful ingredients in the rub.  I’ve incorporated her tip over the years and used Jen’s recipe as a framework, tweaking here and there and adding tips that I’ve learned along the way to ensure success after years of preparing wings for a discerning crowd!

For a healthy twist on the classic drums and flats, you make enjoy this protein-rich Buffalo Wing Hummus. 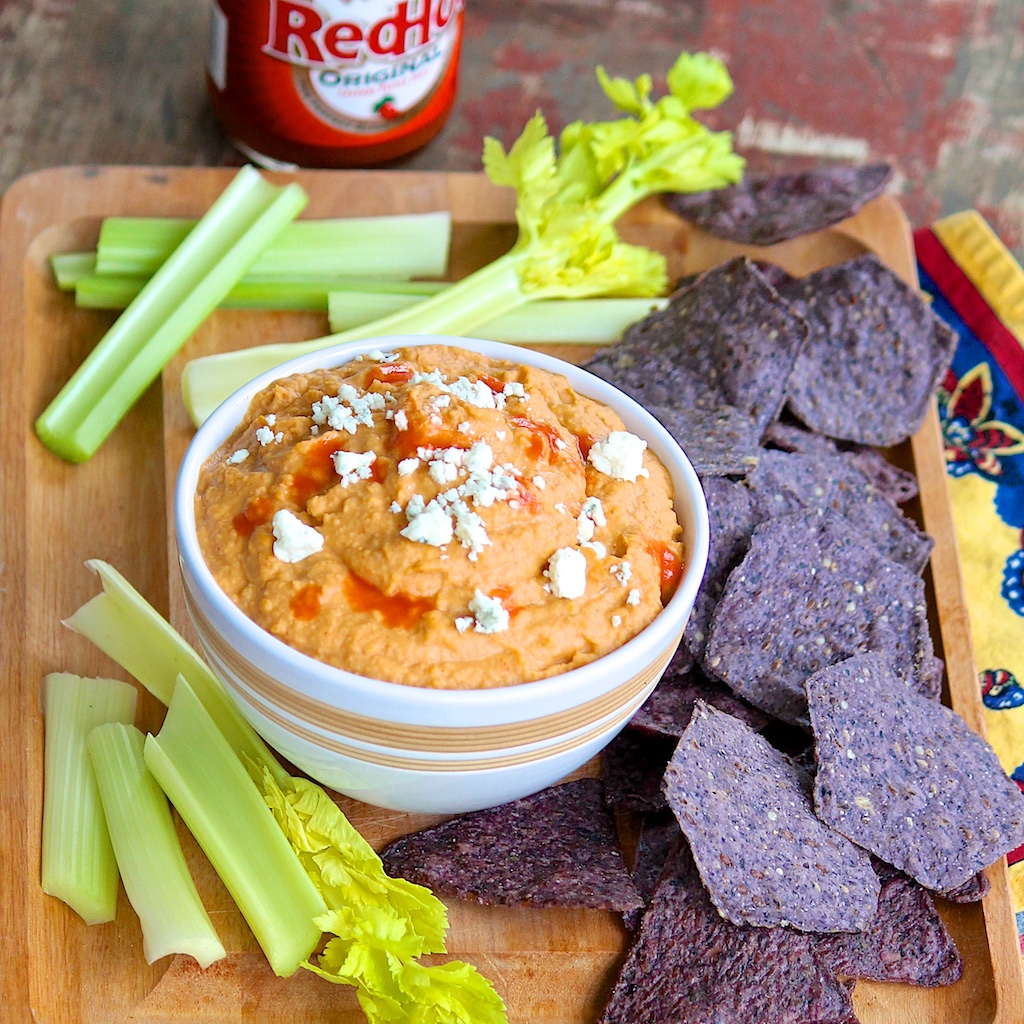 …or a slice of Buffalo Chicken Pizza! 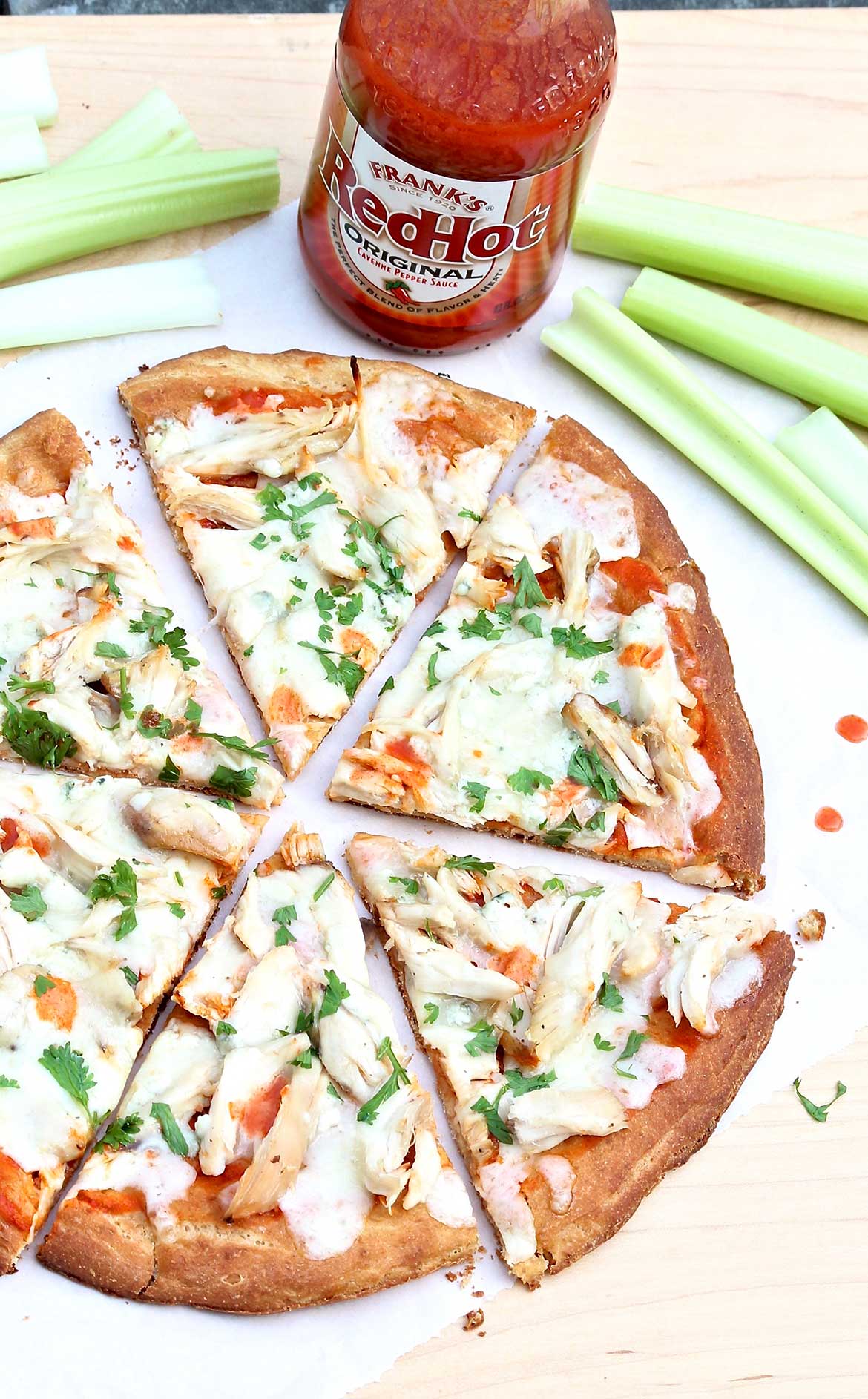