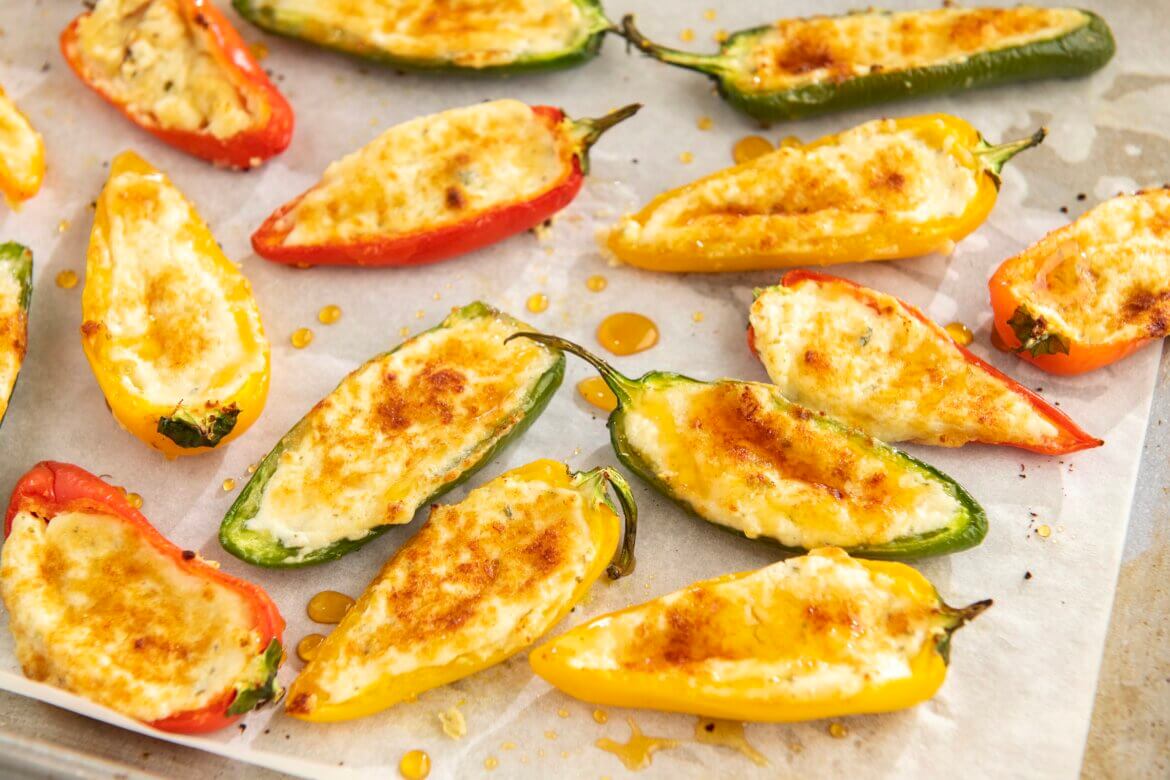 A flavor-packed appetizer that can also be served as a tasty side dish, these 3-ingredient bites are quick to assemble and bake to golden, cheesy perfection. An optional fourth ingredient offers a spicy-sweet variation!

Jalapeño poppers have long been a party favorite. But what if you could make a quicker, easier, every-bit-as-tasty popper with mild and spicy options?

A seasonal treat in the summer, mini peppers can be found year-round in the produce section of most large grocery stores, often in an 8-ounce bag. The trio of colors (most bags include red, orange, and yellow) offers visual appeal whether cooked or enjoyed raw.

As an added perk, mini peppers tend to have very few seeds so the prep before adding the cheese involves little more than slicing the peppers in half. Any seeds can be easily removed with your fingers or scraped away with a small spoon. If some seeds remain, you won’t even notice them once the poppers are baked to crisp-tender perfection.

Boursin cheese is the true workhorse here. The light, creamy-yet-slightly-crumbly French cheese is infused with herbs and spices–essentially a one-ingredient wonder that performs the job of many.

A dusting of Parmesan adds another layer of flavor and browns to golden perfection.

These peppers are ideal for those who don’t enjoy spicy foods. But happily, there’s a simple adjustment for those who appreciate some heat.

Instead of the naturally sweet mini bell peppers, jalapeño peppers may be used for an easy variation on the traditional jalapeño popper. To please all palates, I sometimes use a mix of sweet and hot peppers. The color variation makes it easy to differentiate.

When preparing a mix, look for smaller jalapeños, as their flesh tends to be somewhat denser than that of the mini bell peppers and they often take an extra minute or two to bake.

For added convenience, the peppers may be prepped several hours in advance and baked when ready to eat.

Boursin cheese is an herbed soft cheese that can usually be found in the refrigerated deli section of the grocery store or with other cheeses like feta, blue cheese, and possibly cream cheese. The mini peppers are located in the produce section. Depending on the store, I’ve seen them both refrigerated and not. 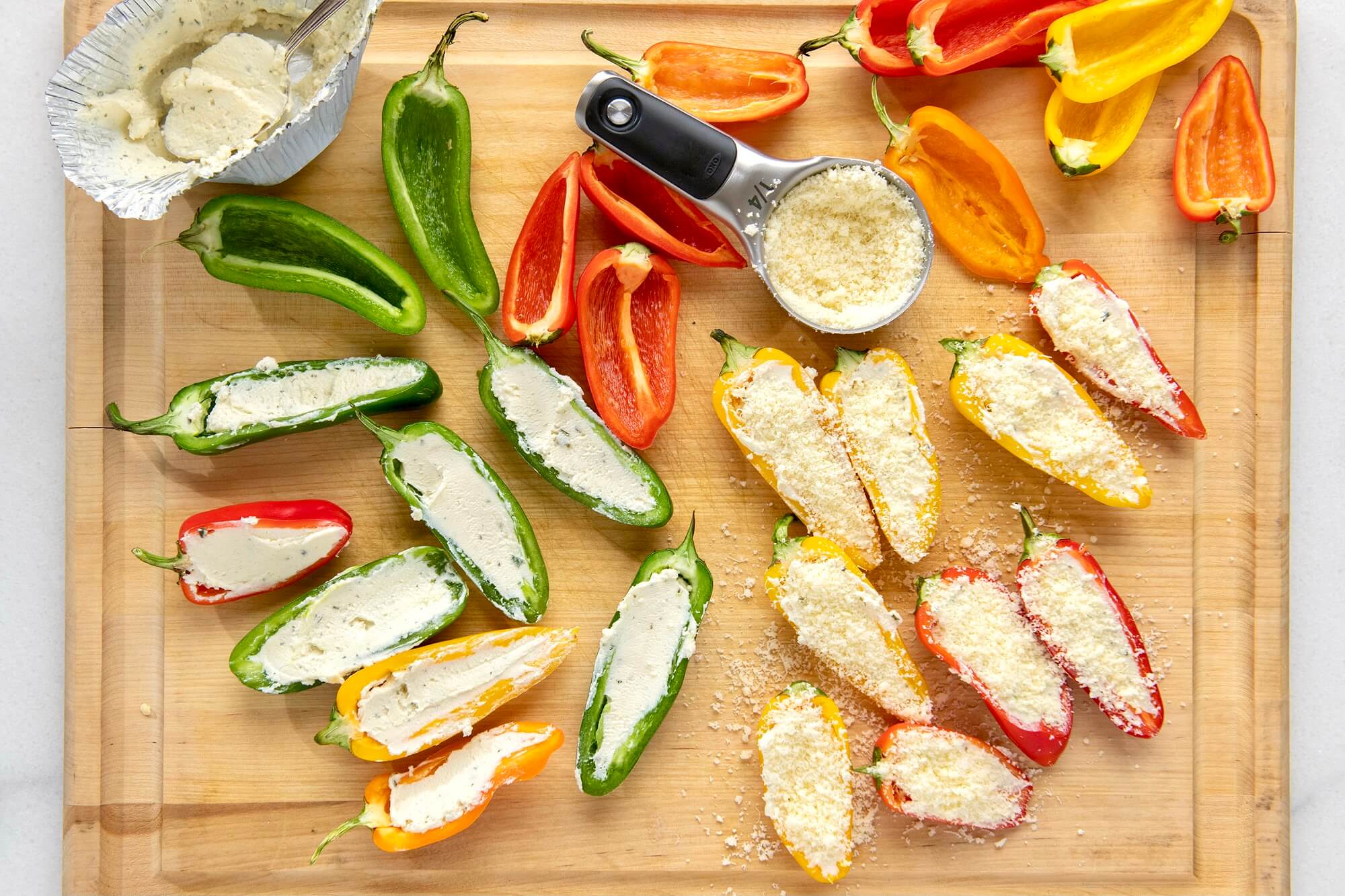 While I provide specific amounts in the recipe below, you can really eyeball the cheeses. For best cheese-to-pepper ratio, I level the Boursin with the pepper edges rather than mounding it up, and then follow with a generous dusting of Parmesan. 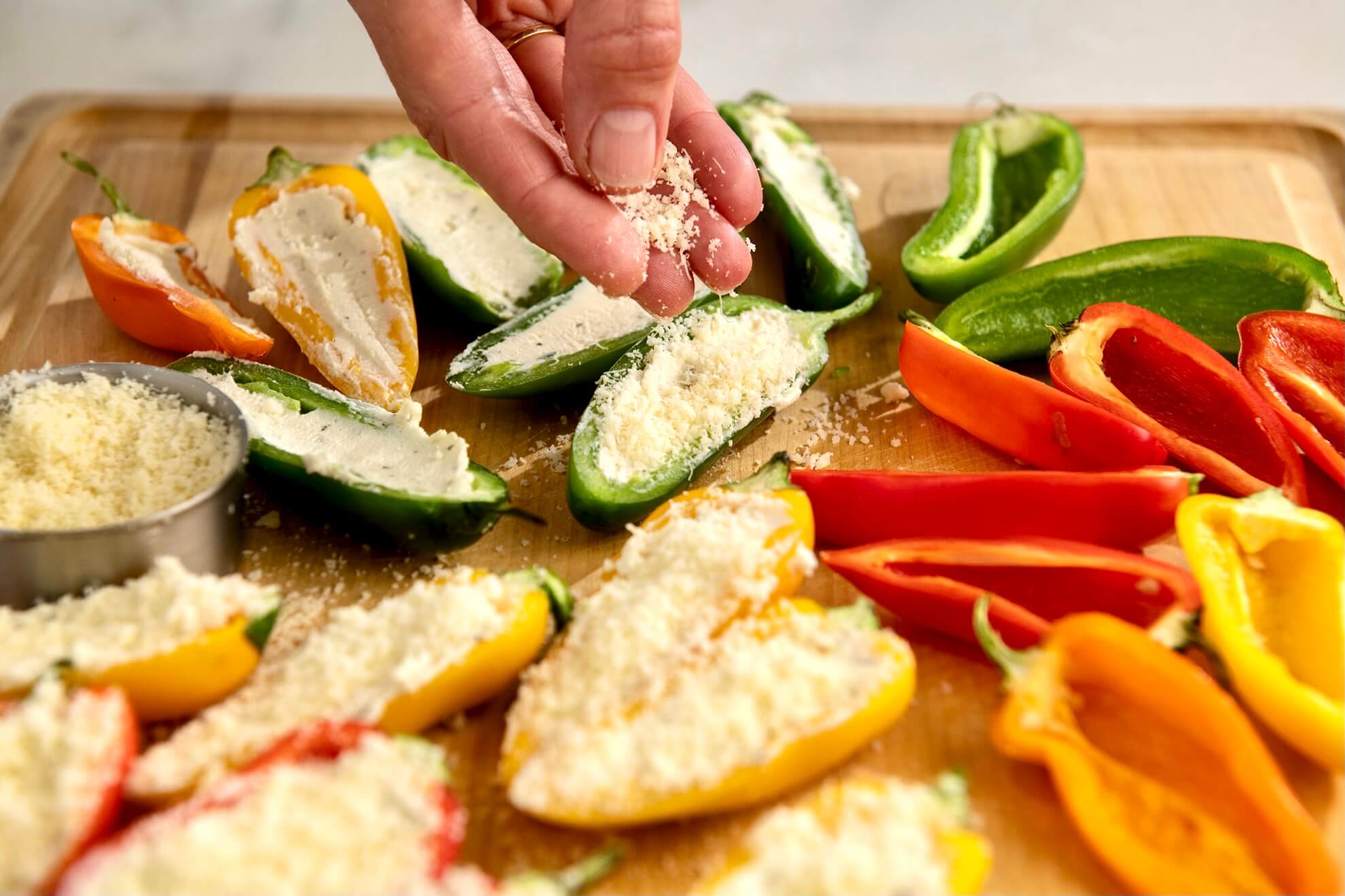 The Parmesan becomes golden brown when baked, adding to the great taste and visual appeal. 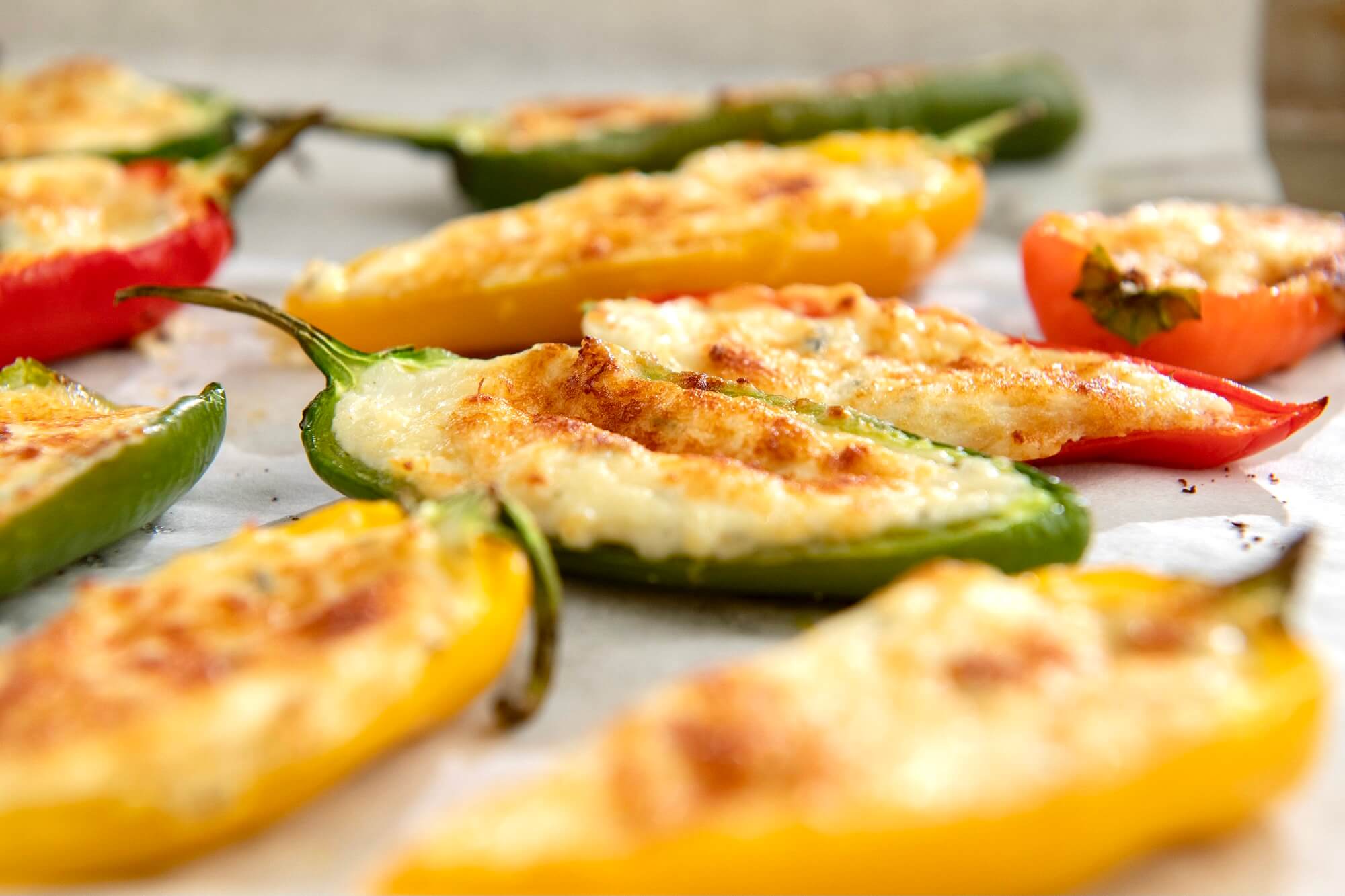 You may broil for a minute or so at the end if you’d like to brown them more. This batch took 15 minutes in my oven without broiling. 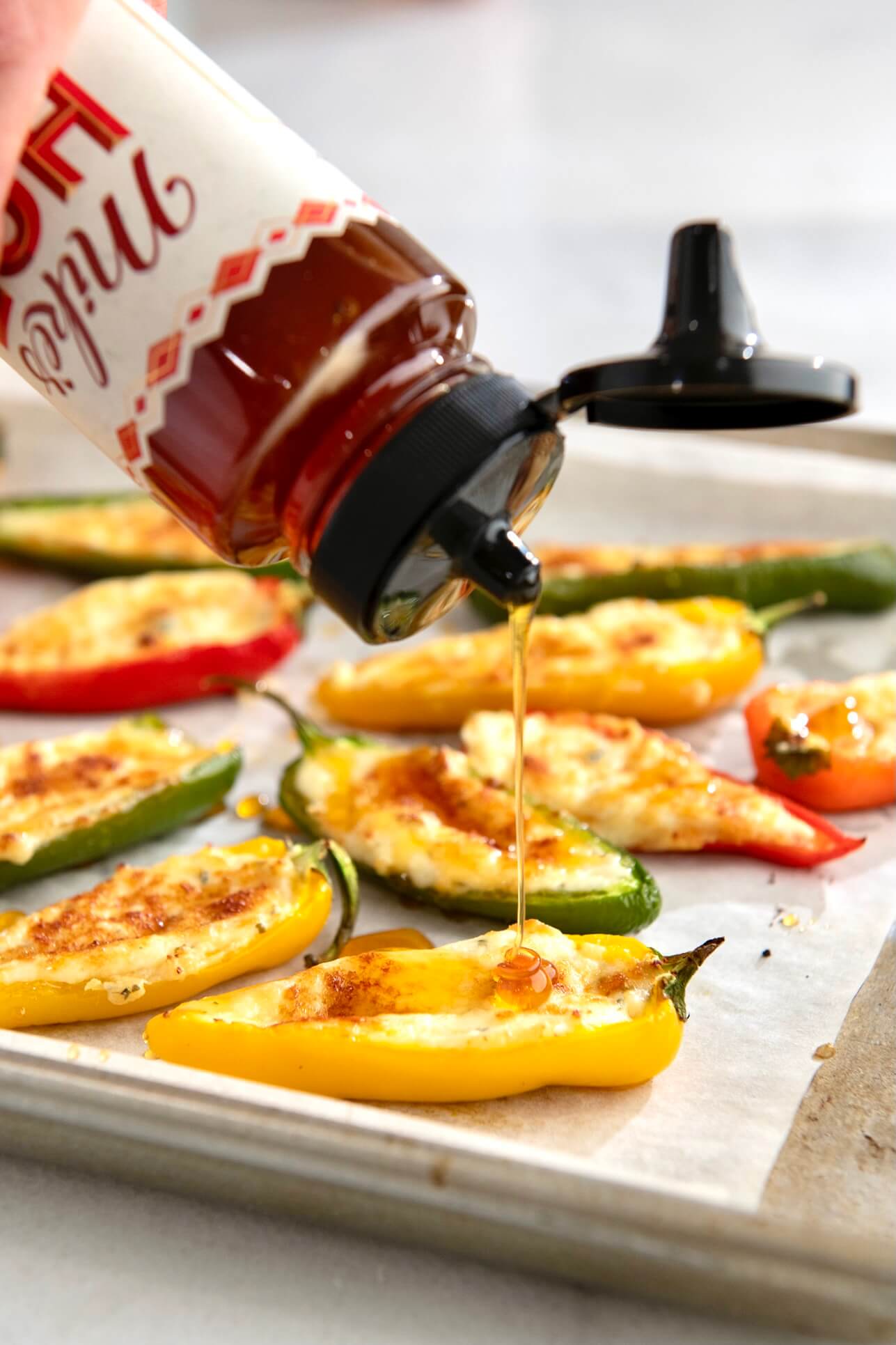 The honey drizzle is optional. We sometimes use hot honey, although regular honey would work especially well when preparing the recipe with jalapeños. For those who haven’t tried, Mike’s is a brand of hot honey that is available at many large grocery stores. 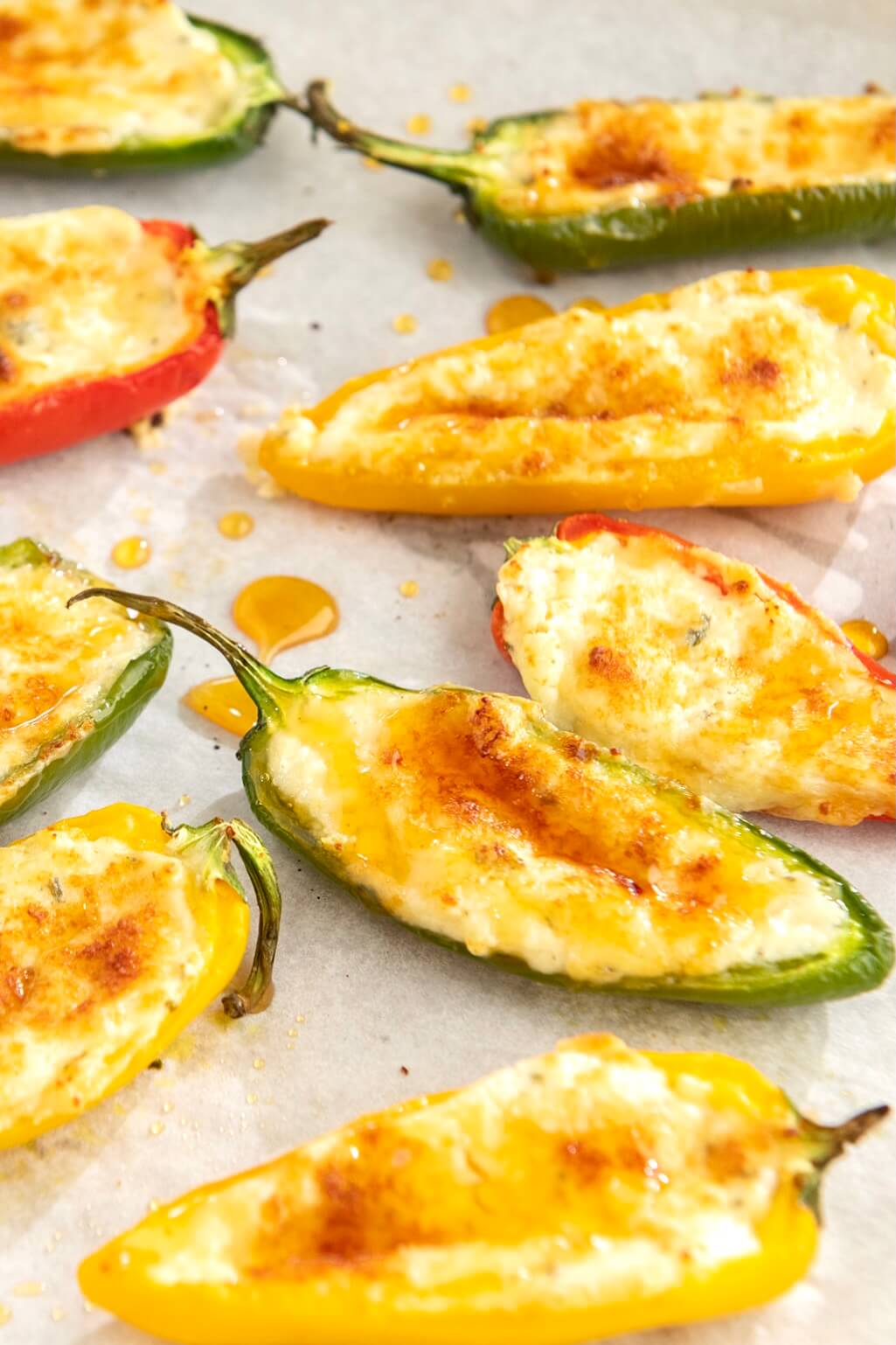 The end result is a satisfying bite (or two) that balances cheesy decadence with the wholesome appeal of the colorful peppers. If you go to the small effort to prepare these savory poppers, I think you’ll agree!

A fun nutrition fact from our dietitian Emily:
In addition to color and taste, there’s a difference between the nutritional content of these mini bell peppers. Green peppers that are harvested later will have an opportunity to change to yellow, orange, and then red. The longer they stay on the vine, the more vitamin C and beta-carotene they accumulate. And while the nutritional difference between green and red peppers may be relatively negligible in terms of our overall diet, it’s certainly a fun fact!

For those who are curious…
The reason we don’t list nutritional breakdowns next to each recipe is because the numbers can change significantly depending on brands people buy and how exact the measuring is. In saying that, if you email me separately, I can provide you with my best estimations on the nutrients you would like to know more about in this recipe. I’m happy to help! 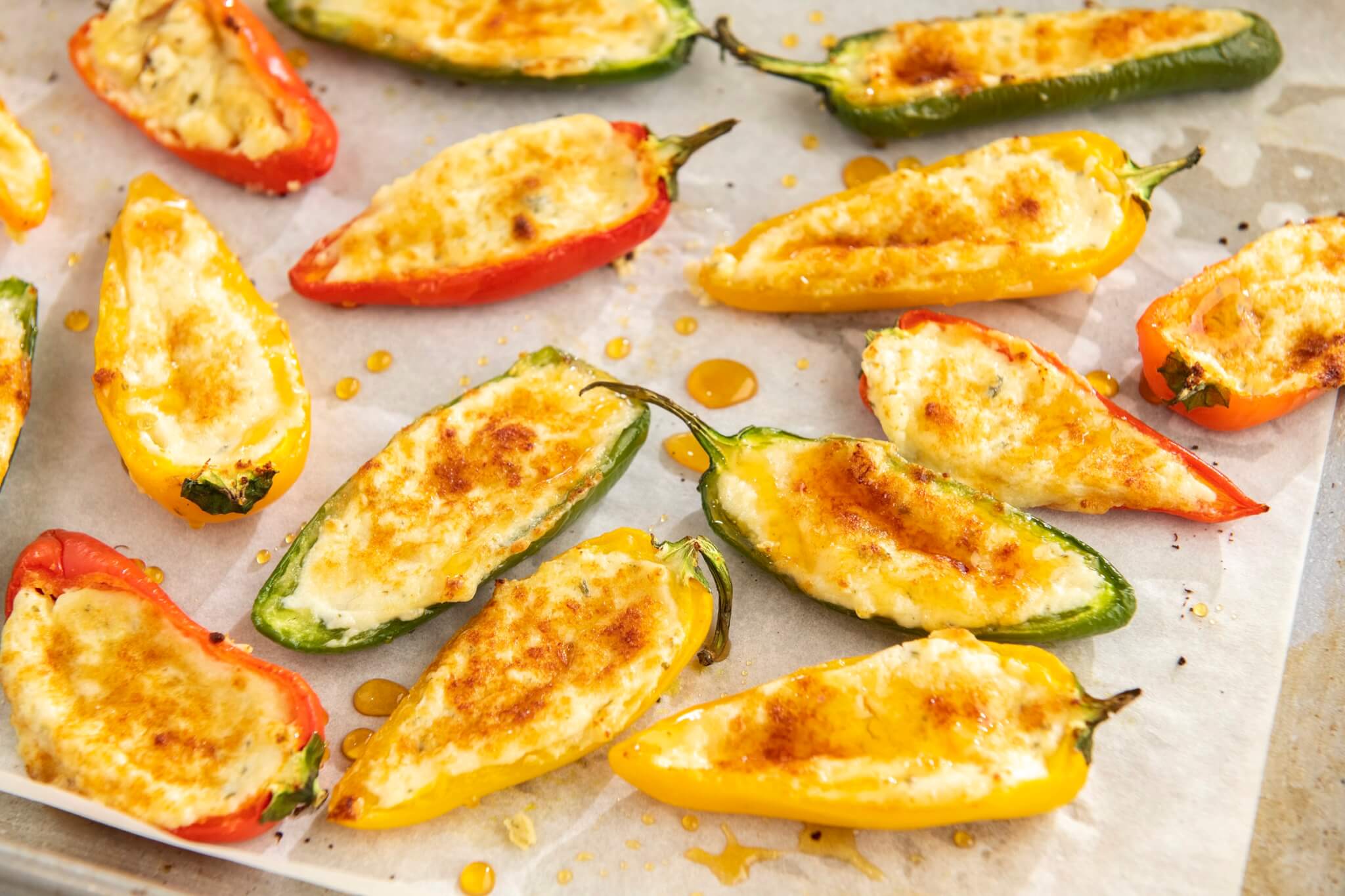 Preheat the oven to 425℉ and line a rimmed baking sheet with parchment paper or greased or sprayed foil.

Cut each pepper in half lengthwise and remove any seeds. (There likely won’t be many, and if you don’t get them all, you likely won’t even notice.) I leave the stems for visual appeal and a handle of sorts, but you could remove.

Fill the peppers halves with small spoonfuls of the Boursin cheese and spread into an even layer. Sprinkle evenly with the Parmesan and black pepper. Place them, filling side up, on the baking sheet and roast for 15 minutes, give or take a minute or two depending on oven, or until the peppers are crisp-tender and the cheese is golden on the edges. If you’d like a little more golden-brown color on the top, you may broil for a minute or so, watching very carefully to avoid burning. (Avoid broiling if using parchment paper.)

Add a sprinkle of optional fresh black pepper and/or a drizzle of hot honey and enjoy!

*When making jalapeño poppers, I have found that the jalapeños typically require an extra minute or two of cook time to soften. You may remove the veins for less heat, if desired. Finally, gloves are a good idea when working with hot peppers–and avoid touching your eyes.

•Leftovers may be warmed in the oven, although I’ve heated one or two in the microwave for a quick snack. In my microwave, a single pepper is hot within 10 seconds.

•Prefer to make more or less? Feel free to scale the recipe up or down to make as many, or few, poppers as you like. The amounts of the various ingredients are also easy to eyeball.

•To prepare ahead: Follow the instructions up to the point of baking, and then transfer the peppers to an air-tight container and refrigerate for up to 8 hours. The unbaked poppers may keep well overnight, but I have not yet held them that long.

Recently, my husband came home with a bagful of assorted hot peppers from Brooklawn, a local market. So big was this bag (safely a gallon), I wondered what on earth I would do with all of them. Perhaps put the colorful mix in a bowl for decoration?

He took the first photo, below, so I could determine how spicy the peppers would be. The lineup on the top shelf is arranged, left to right, from least to most spicy. I kept zooming in on the photo as I picked through the bag! 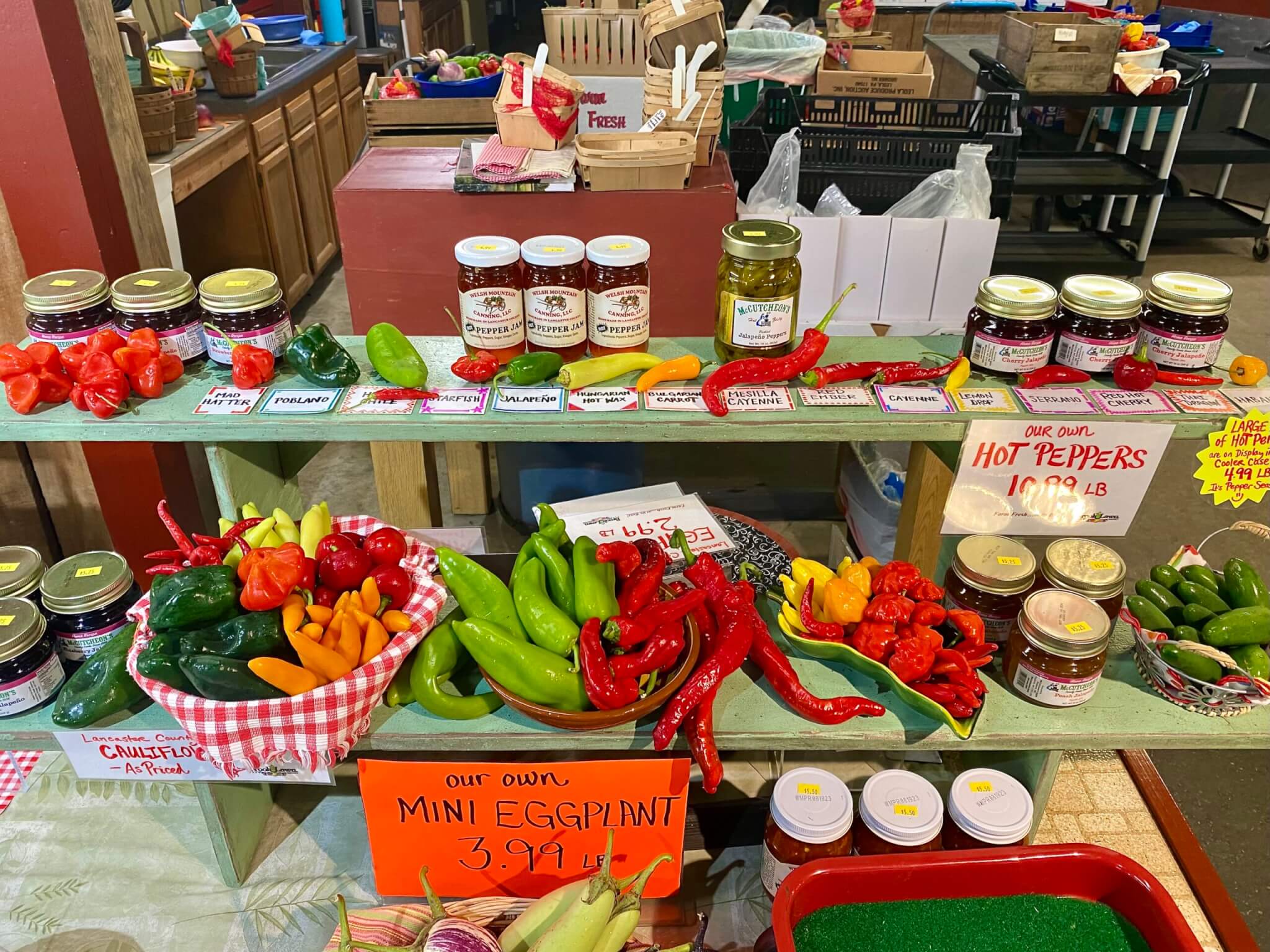 I put quite a few to good use with this recipe–all the peppers on the tray shown below were HOT–and a group of extended family had fun testing their spicy limits. My 10-year-old niece was the hands-down winner. She further amused us by eating one of the spiciest peppers raw, reporting that it was “a little hot.” 🔥 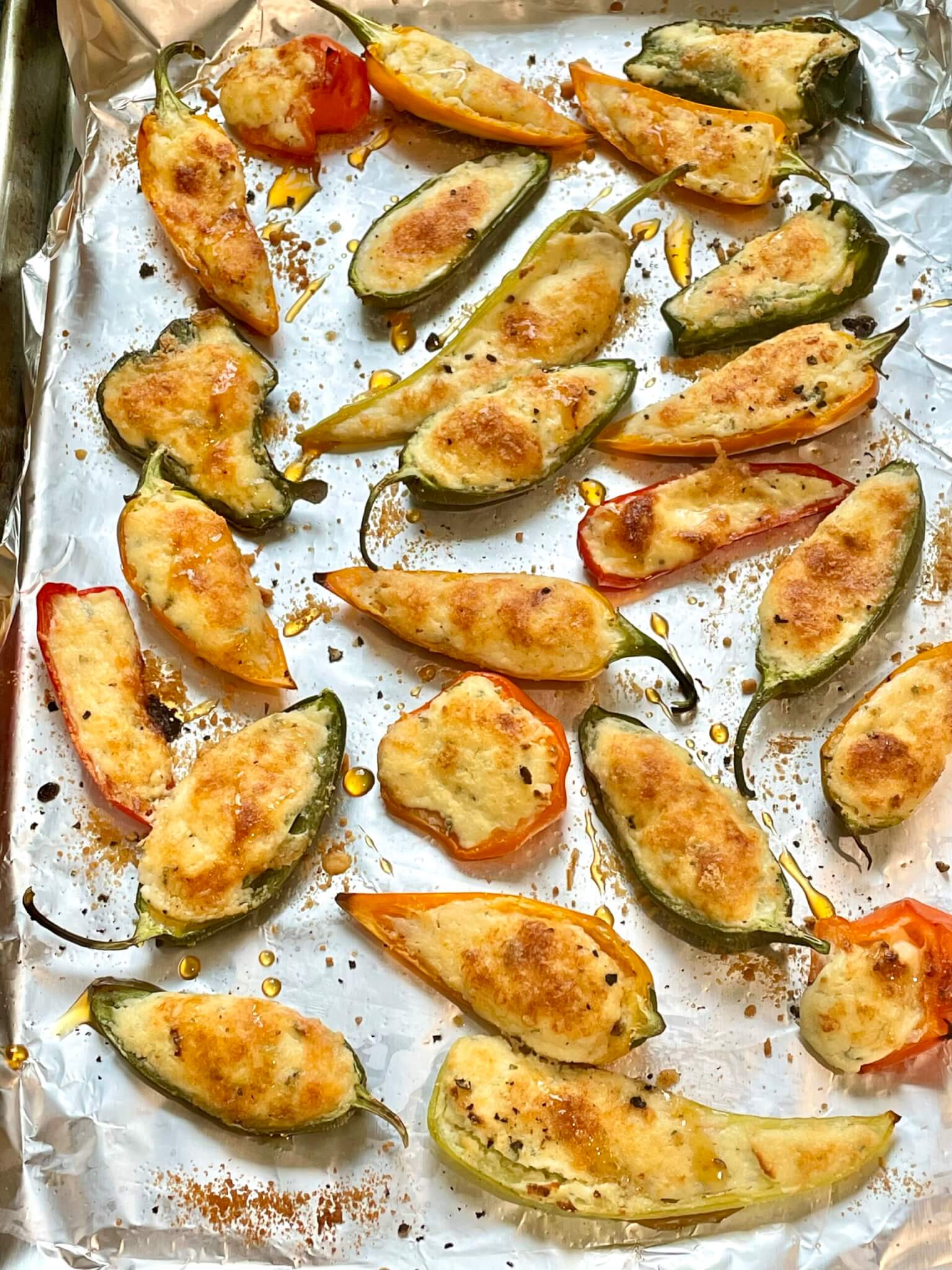