A Few of my Favorite Things － August 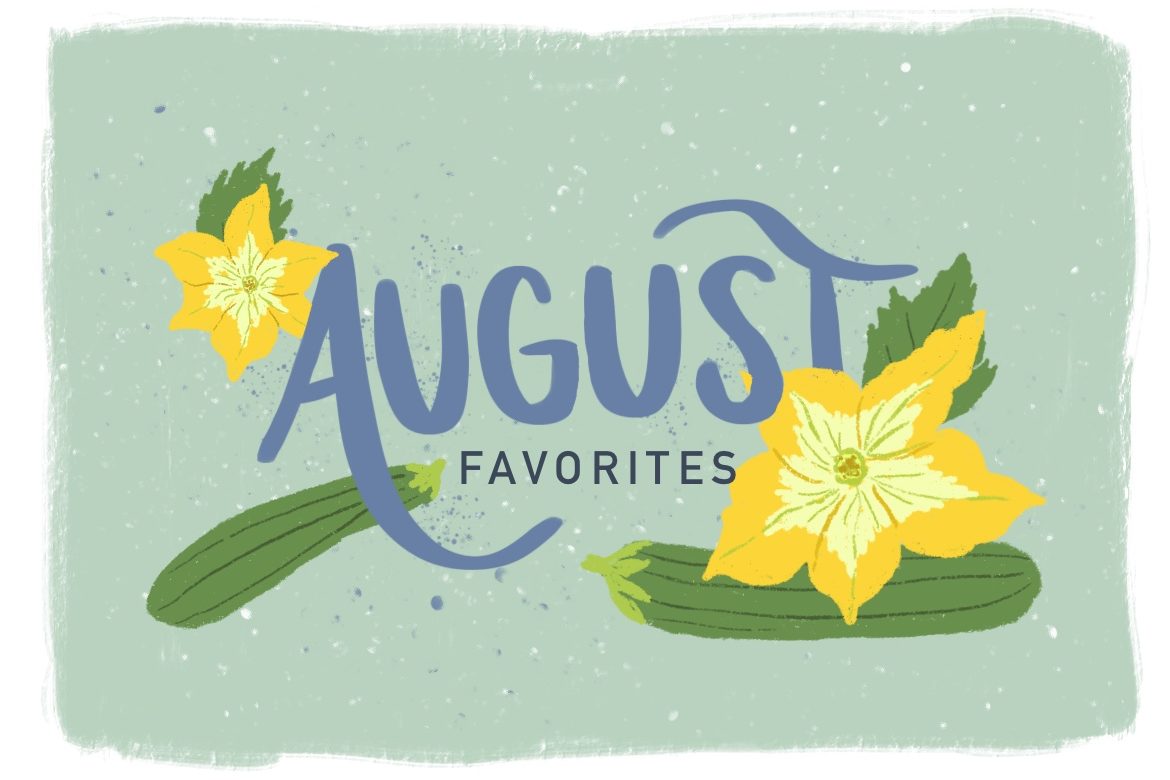 Would you believe that this is our 16th installment of Favorite Things? Originally created in response to reader requests, this monthly series is ideal for someone (like me) who can never settle on just one favorite. Every month we get to begin anew!

I’ve come to enjoy creating these lists as much as I hope you enjoy reading them!

As it occurred to me how many editions we’ve amassed, I took a few minutes recently to scroll through some older posts. Previous summertime tips and recommendations have included how to avoid Swimmer’s Ear (it’s foolproof!), favorite comfortable sandals, top-rated ice creams, and my go-to recipes when I need to pull a crowd-pleasing meal together but don’t want to spend too much time in the kitchen.

Because we all like a good surprise, there’s an occasional bonus recipe at the bottom of some of the posts. (Cold cucumber soup, anyone?)

We can always add more to the list, of course, so let’s dive into this month’s Favorite Things! 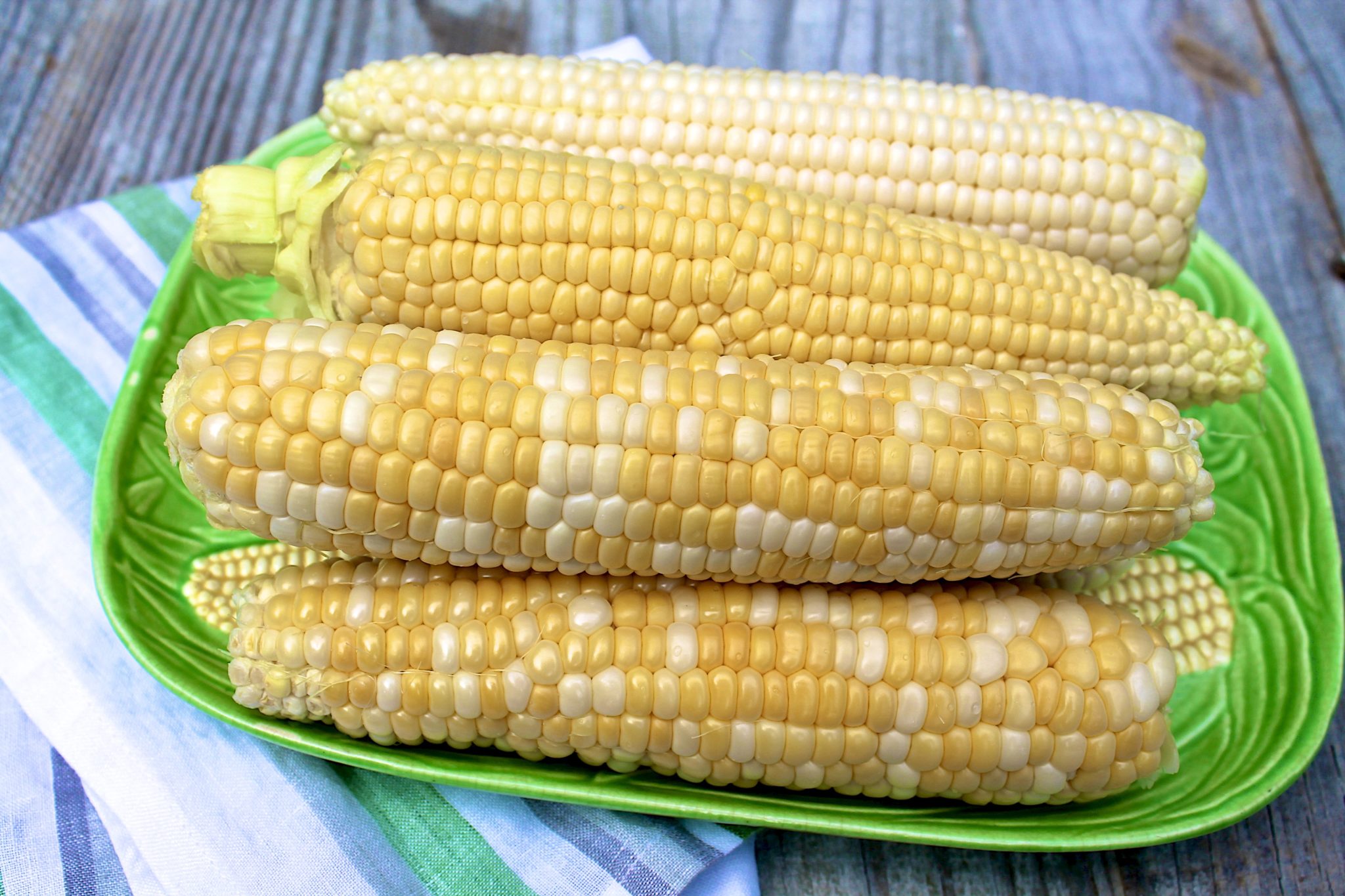 In our house, August food favorites include tomato sandwiches, homemade Meadow Tea, lots of corn on the cob, and the many salads I make with the leftovers. It was difficult, but for the sake of this post, my family rated their top three corn salads:

There are more, however, so for those wanting a complete meal or even a dip, perhaps, I encourage you to search “corn” and scroll back a bit.

For fellow tomato sandwich fans, do you keep it simple－white bread, thick juicy slices of vine-ripened tomato, a slather of mayo, and perhaps a sprinkle of salt and pepper? Or do you fancy your tomato sandwich up with sliced avocado, thinly sliced onion, or maybe some bacon? Whatever the case, this summer classic never grows old!

Before we move on from the corn topic altogether, the timing seem right to include a tip I haven’t mentioned in this space for years. If you try it once, chances are good your family will request it every time you eat corn on the cob! ⇩⇩

🌽Favorite Tip of the Month 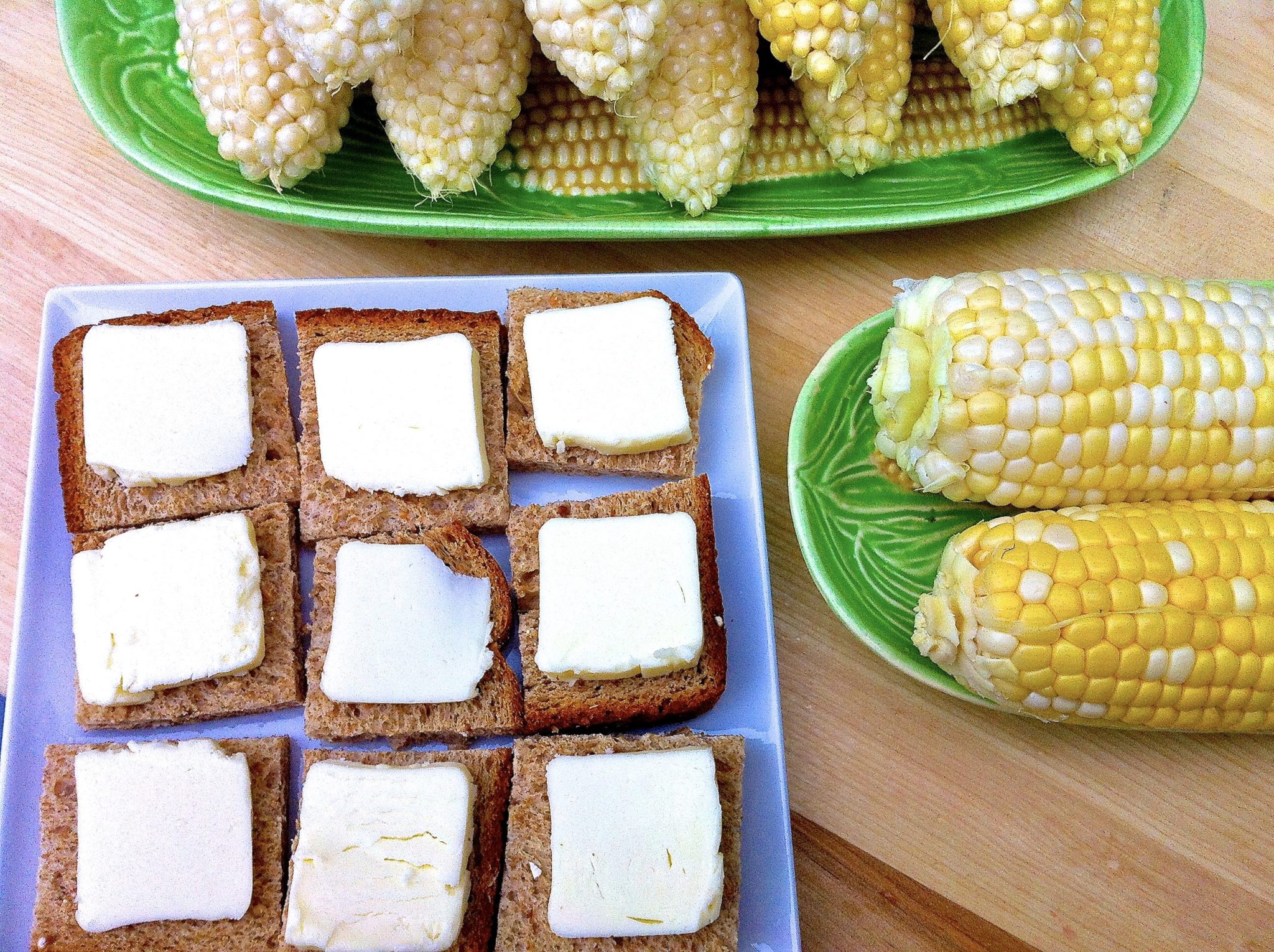 My family has long considered this to be the best-ever trick for buttering corn: simply cut sandwich bread into squares and place a pat of butter on top. You can prepare them in advance, place on a plate, cover, and refrigerate until ready to use. There’s no waiting for the lone butter dish to work its way around the table, no messy stick of butter, and the butter doesn’t slip-slide around on the hot ears. The leftover square of buttered bread is rather tasty, too. Gluten-free bread may be used, as needed, and crackers are an option if you don’t have bread on hand. However, to prevent crackers from breaking, try not to press too hard on them. 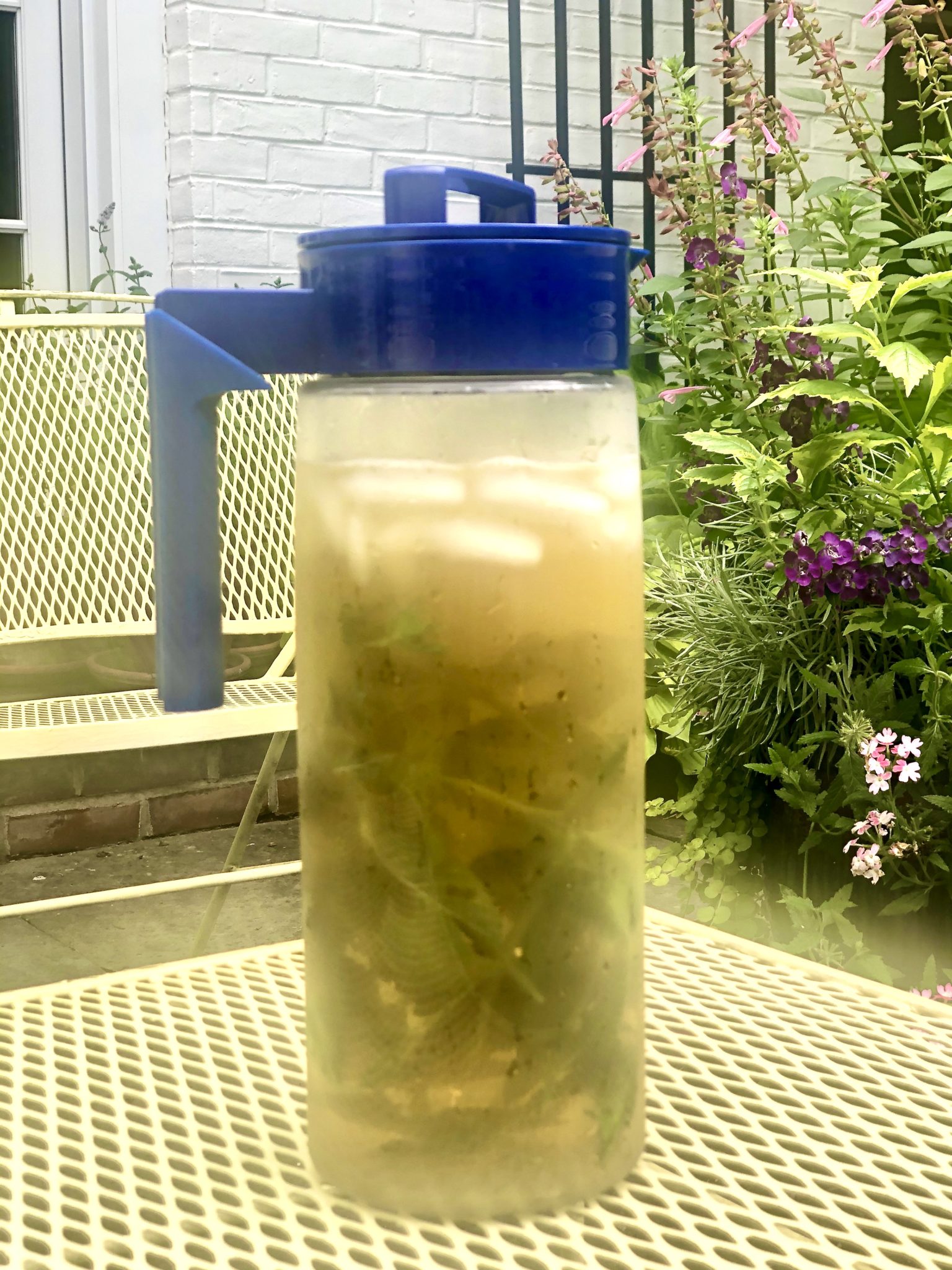 As a part of his year-round, daily routine, a dear friend would always buy an iced black tea from a cafe near his office. Sometimes he bought two. If someone offered him a third, he wouldn’t turn it down. So when the quarantine hit and he began working from home－and the cafes in his town were closed－I wondered how he would get his fix! I did a little research and discovered the Takeya Iced Tea Maker. I shipped it with some tea I bought from a local cafe－the tea they said they use for their customer favorite black iced tea－and he loved it! So much so that I bought one for myself.

The tea maker comes in one- and two-quart sizes, a variety of colors, and works with loose or bagged tea. There’s a hot water and cold brew method. The former is ready in minutes, while the latter requires an overnight steep. Both are incredibly easy and the end result is smooth and refreshingly delicious. I’ve been making a variety of teas, from fruity herbal to classic black. I also discovered I can make fresh mint tea in no time with the handy pitcher or simply add some fresh mint to complement herbal teas like lemon verbena. To accommodate unsweetened and sweet drinkers, I keep a jar of simple syrup in the fridge.

How to make simple syrup: add one cup of sugar and one cup of water to a small saucepan and bring to a boil. Reduce heat and stir until the sugar is dissolved. This won’t take long. Cool and store in a small pitcher or jar in the refrigerator, where the syrup will keep for many weeks.

🍿Favorite Movie of the Month (documentary) 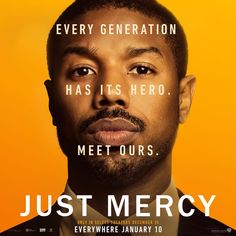 Starring Michael B. Jordan, Jamie Foxx, and Brie Larson, Just Mercy tells the true story of Walter McMillian (Foxx), who, with the help and unwavering commitment of young defense attorney Bryan Stevenson, appeals his murder conviction. The film is based on Stevenson’s best-selling memoir of the same name. The book, in turn, stemmed from Stevenson’s life work which, at the risk of his own safety and well-being, revealed countless injustices and gave a voice to scores of death row inmates who were wrongly accused yet served time for crimes they did not commit. The film simultaneously inspires awe and outrage, hope and despair, and holds the viewers attention with ease.

My family watched this movie shortly after seeing the documentary 13th, which looks at the criminal justice system and how the Thirteenth Amendment is connected to the mass explosion in prison populations that has occurred since the 1980s. Both films offer valuable resources for those who are interested in learning more about the systemic racism that exists in our country. I watched both films with my husband and younger son, and we all thought they were powerful, extremely well done, and definitely worth watching. I would recommend Just Mercy as a starting point for those prefer the traditional storyline format of a movie.

📺Favorite TV Show of the Month

My son is thrilled with the return of NBA basketball, although family TV viewing still centers around old seasons of Survivor (see this post for details and a link to recommended seasons) mixed in with an occasional Ozark episode.

For those who may be unfamiliar with Ozark, of which there are currently three seasons: we enjoyed season one of Ozark, a Netflix drama starring Jason Bateman and Laura Linney as a married couple who relocate their family to the Ozarks following a money laundering scheme gone wrong. The series is not without violence, so for that reason, I would recommend it only for older teenagers and up.

We’ve also been on the hunt for more documentaries, so feel free to recommend any and all that you’ve enjoyed. If there’s interest, next month I will include a list of all the documentaries we’ve seen in recent months.

📚Favorite Quick Read of the Month 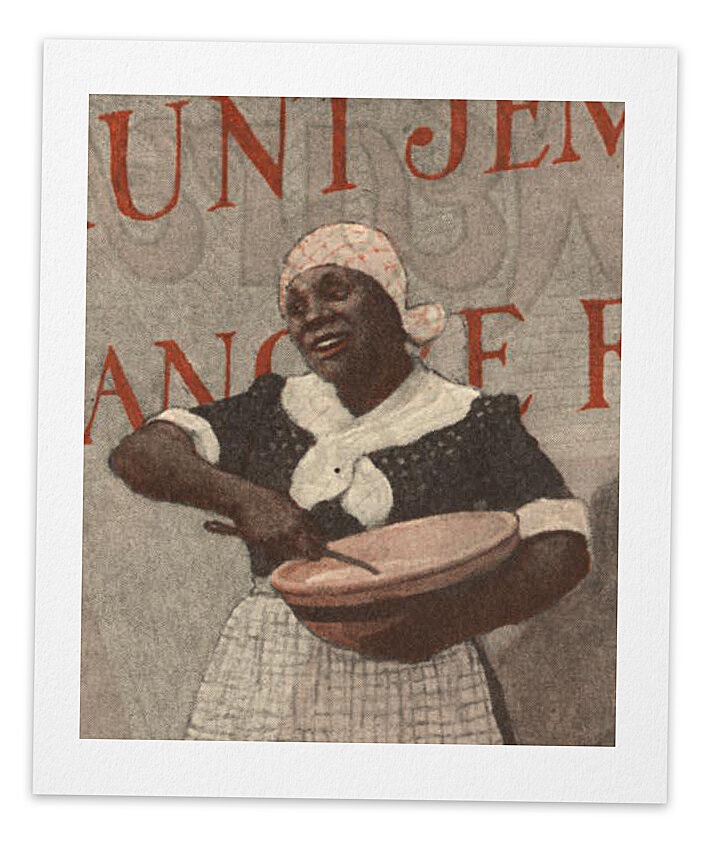 Overlooked No More: Nancy Green, the ‘Real Aunt Jemima’: As we’ve seen from the Black Lives Matter movement, there are times when it’s important to say goodbye to things that have long seemed historically significant, like statues, names, and flags.

At the same time, for some, there can be nostalgia and good feelings that perhaps make it difficult to understand why these changes are necessary. The Aunt Jemima brand name struck me as one such example: my mom bought Aunt Jemima syrup when I was little. To me, Aunt Jemima represented a loving figure just like my grandmother, only with darker skin. I never thought much beyond that endearing image on the package. So, it was with great interest that I read this article.

It’s a brief history lesson that explains who Aunt Jemima really was (for the record, her name was Nancy Green) and how a company profited at the expense of Green and her family all these years.

Fishing! Both my husband’s and my families have long enjoyed fishing in lakes, streams, and the occasional ocean outing. On a recent long weekend to visit my in-laws in the Poconos, we did our fair share. I enjoyed the scenery and peaceful surroundings as much as I did casting for fish.

If you click on the 20-second video above, you will see some fishing success. I should confess, however, that I still pass my line over to my husband to remove the fish and toss it back in the stream. 🤷‍♀️

That same weekend, my younger son and a friend brought the kayaks they made several summers ago. ⇩⇩ (Yes, they really made them!) The boats are truly works of art and look so graceful as they glide through the water. 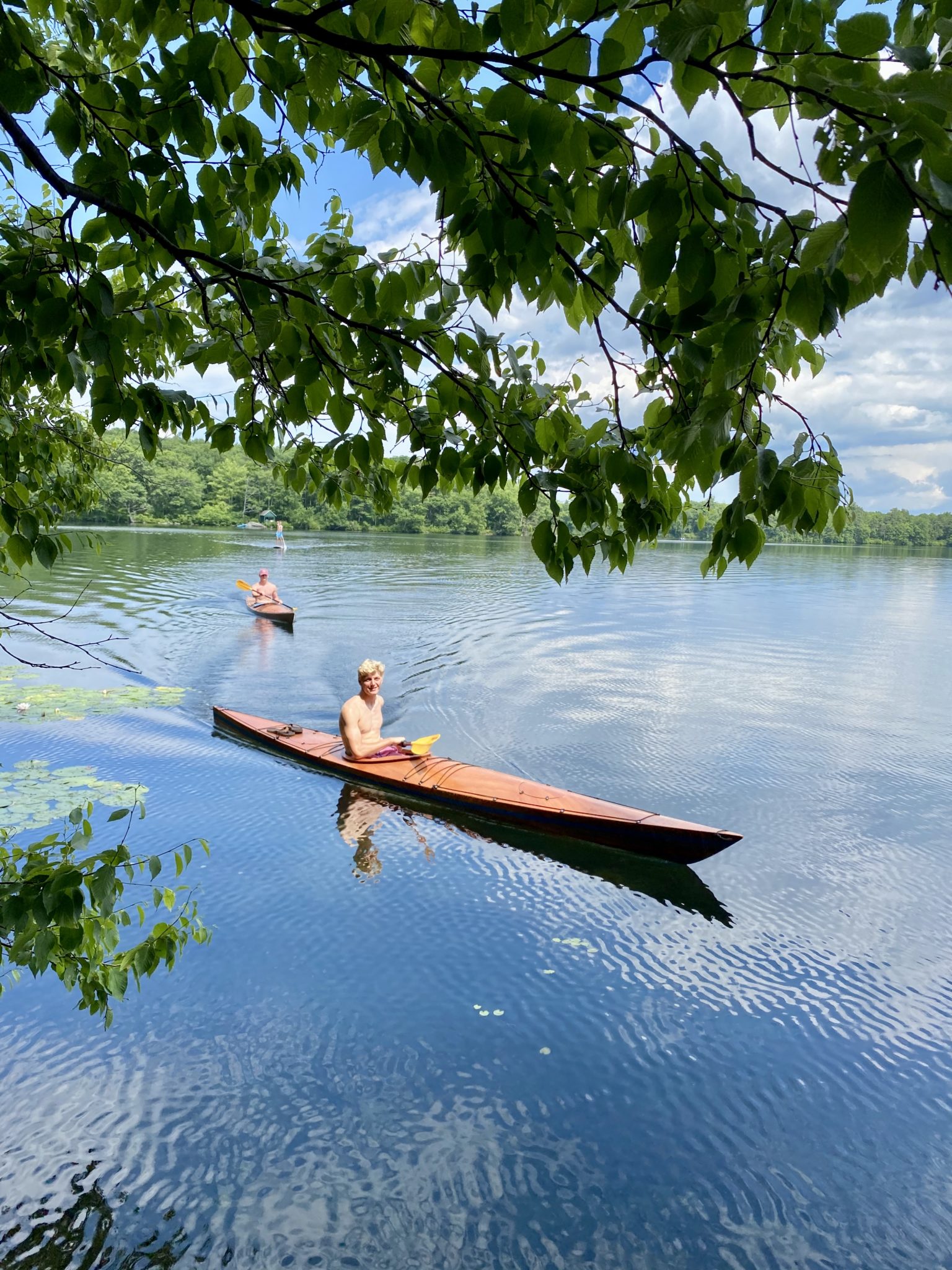 🌻Favorite Flower of the Month 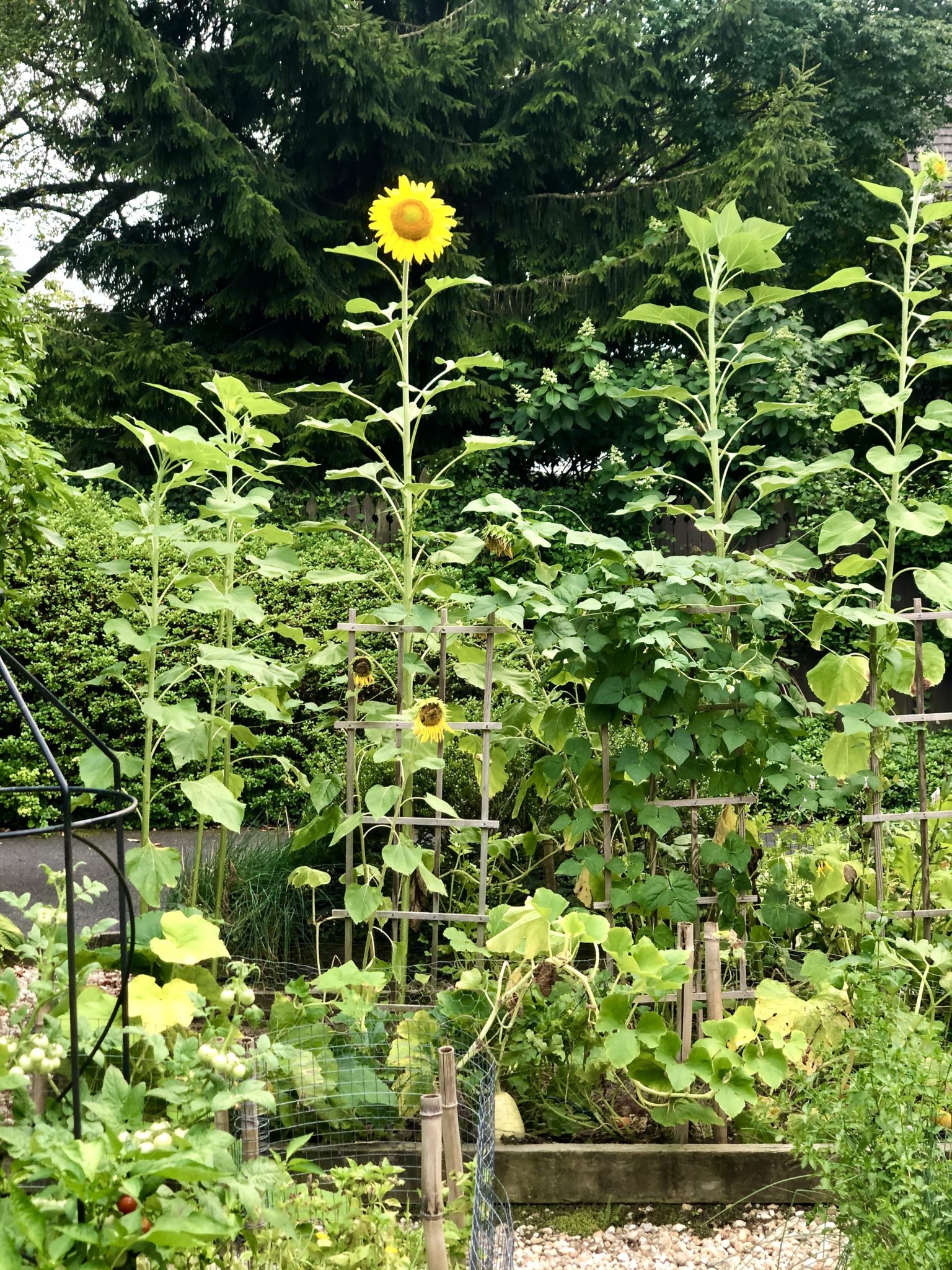 In a garden, sunflowers are a ray of sunshine that tower above all that surrounds them. When cut, it takes just three to five of the giant flowers to make a worthy arrangement. Given as an unexpected gift, they are sure to be a bright spot in someone’s day! 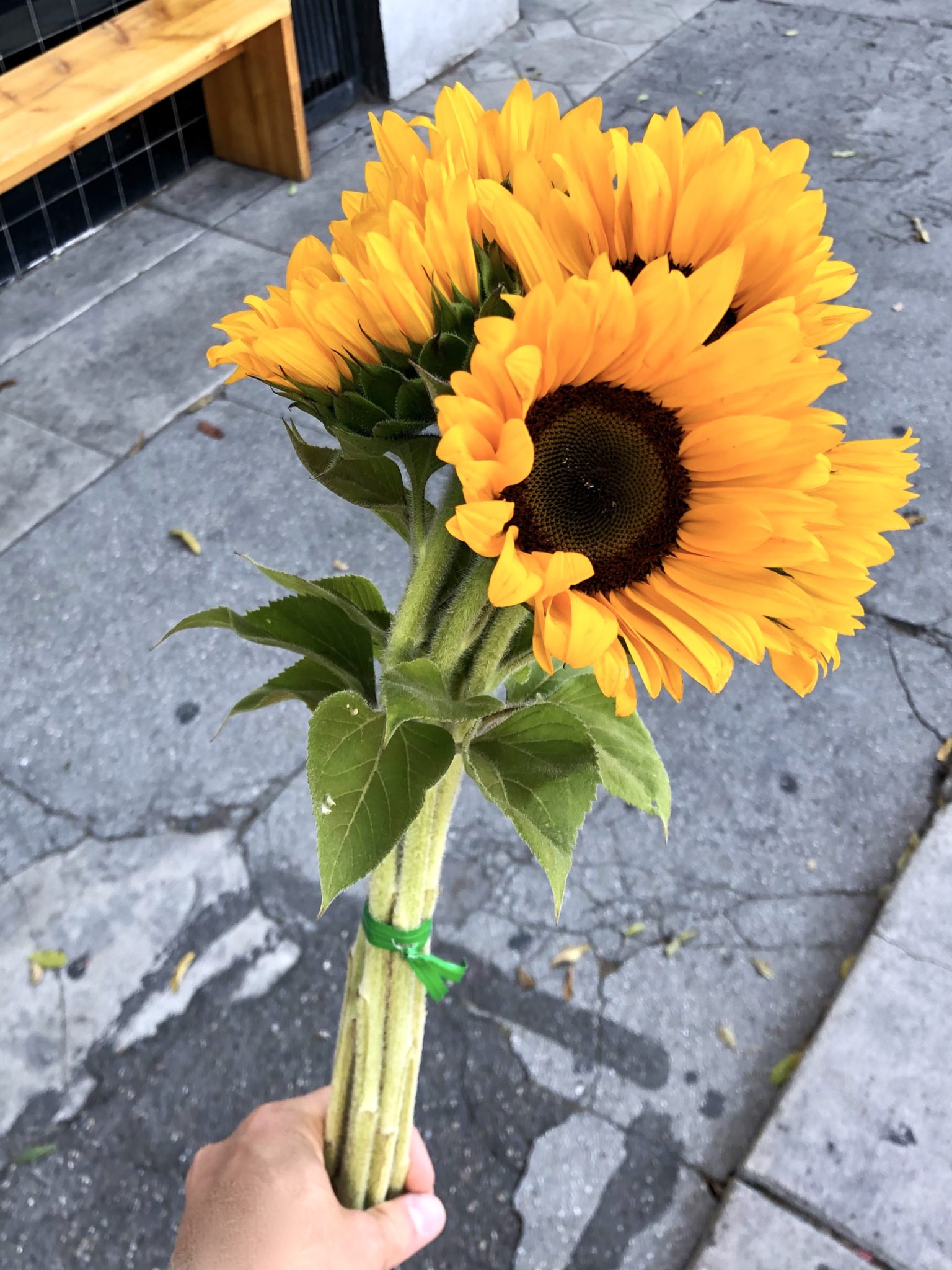 👩‍🍳Reader Favorite Kitchen of the Month 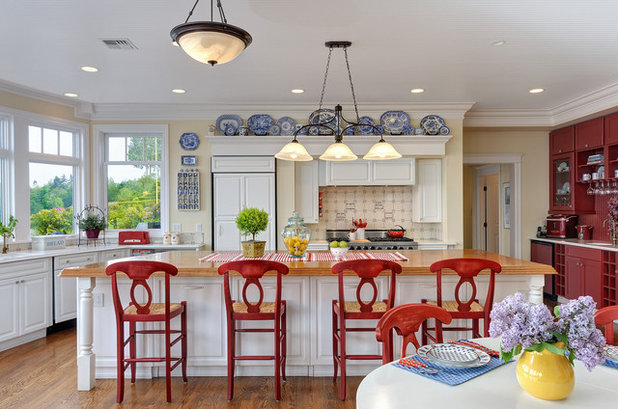 Early in the month, I used the 4th of July holiday to guide my Friday Facebook pick, and reader response was overwhelmingly positive. One reader summed it up with this comment: “I didn’t like the sound of a red, white, and blue kitchen, but I can’t find anything about this kitchen not to like! Great space!” Others described it as a happy kitchen, homey, pretty, and bright with nice touches. Only one reader scored it a low 2 out of 10 and said “It looks confused.”

😂Funny of the Month 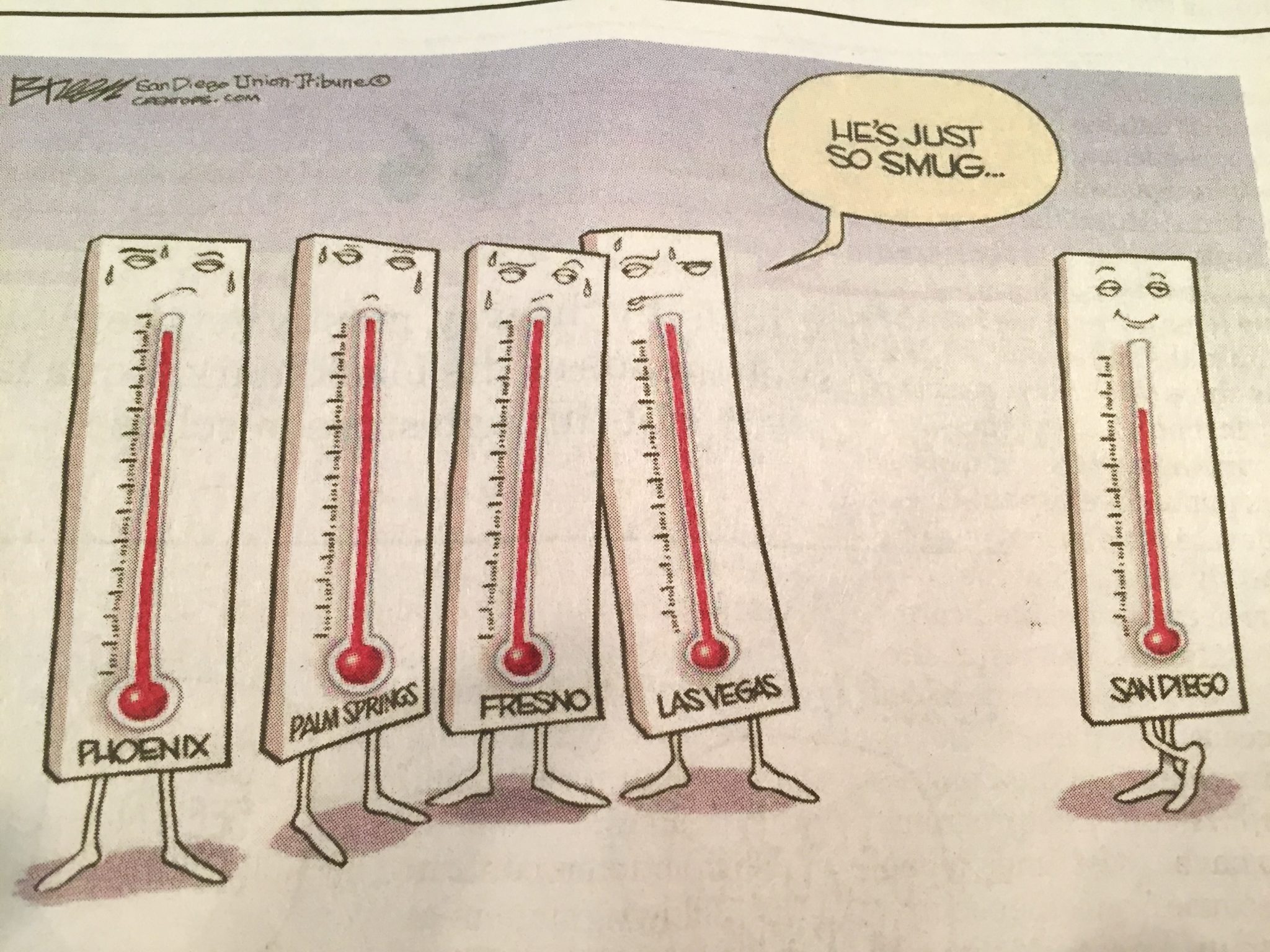 This seemed especially appropriate after our recent heat wave!

Here’s hoping you have a delightful (and healthy) month of August!☀️