What is the Best Way to Cook Bacon? 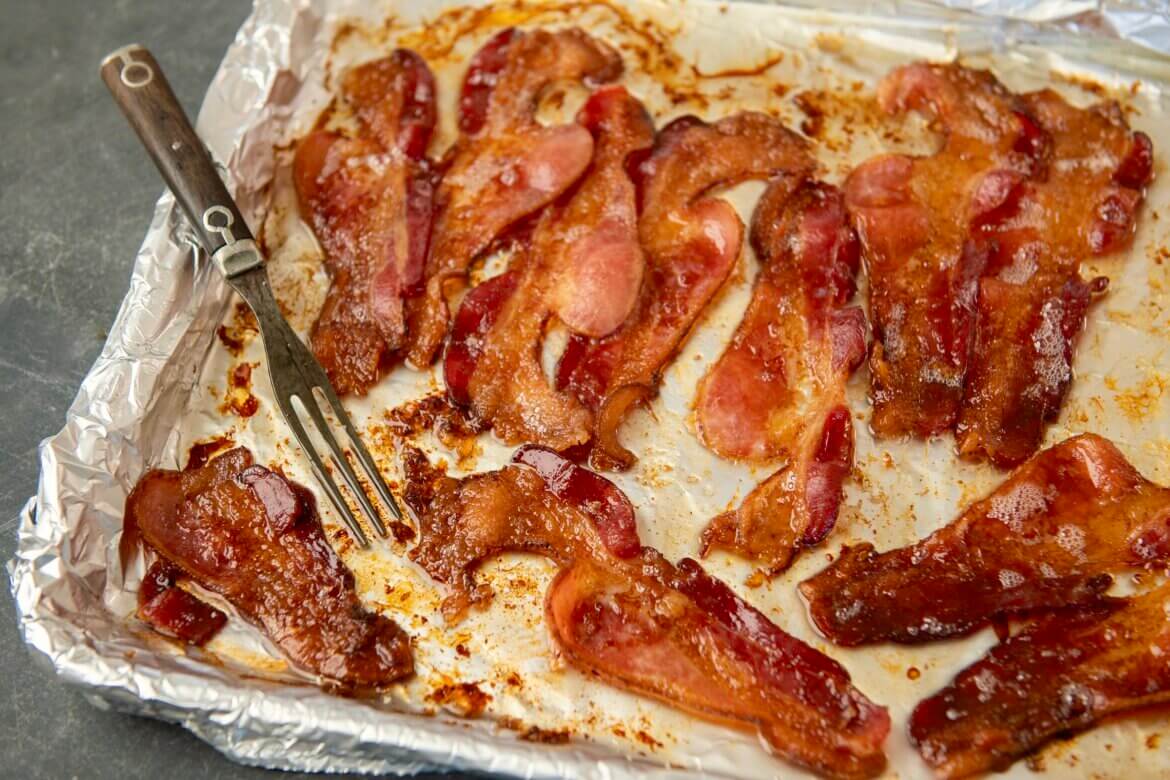 The best way to cook bacon to your preferred level of perfection is easy and mess-free. Two runner-up methods offer convenient options when needed.

Chewy or crisp? Where bacon is concerned, this is a deeply polarizing question.

I’m in the crispy camp. If a strip of bacon doesn’t snap in half with ease or provide crisp crunch to a BLT, I’m happy to pass it by.

Happily, a hands-off, virtually mess-free technique will satisfying everyone. Baking bacon is a sure-fire way to achieve evenly cooked strips that can be fine-tuned to a preferred level of chewy or crispness.

Spoiler alert: I’ve tested cooking the bacon on a rack and cooking it directly on the baking sheet. Happily, the method with less dishes to wash cooks the bacon more quickly and crisps it more evenly.

Bacon’s massive appeal dates back more than 4000 years to China, later spreading throughout the Roman Empire, and, eventually reaching the New World in the 15th century.

The popular, savory treat flavors everything from classic breakfast recipes to newer offerings like chocolate-covered bacon and bacon milkshakes. There are even bacon-of-the-month clubs.

Over time, bacon lovers around the world have come to embrace the cooked strips one of two ways: crispy enough to crumble or soft and chewy.

Happily, following a simple technique will allow you to make your ideal bacon every single time. 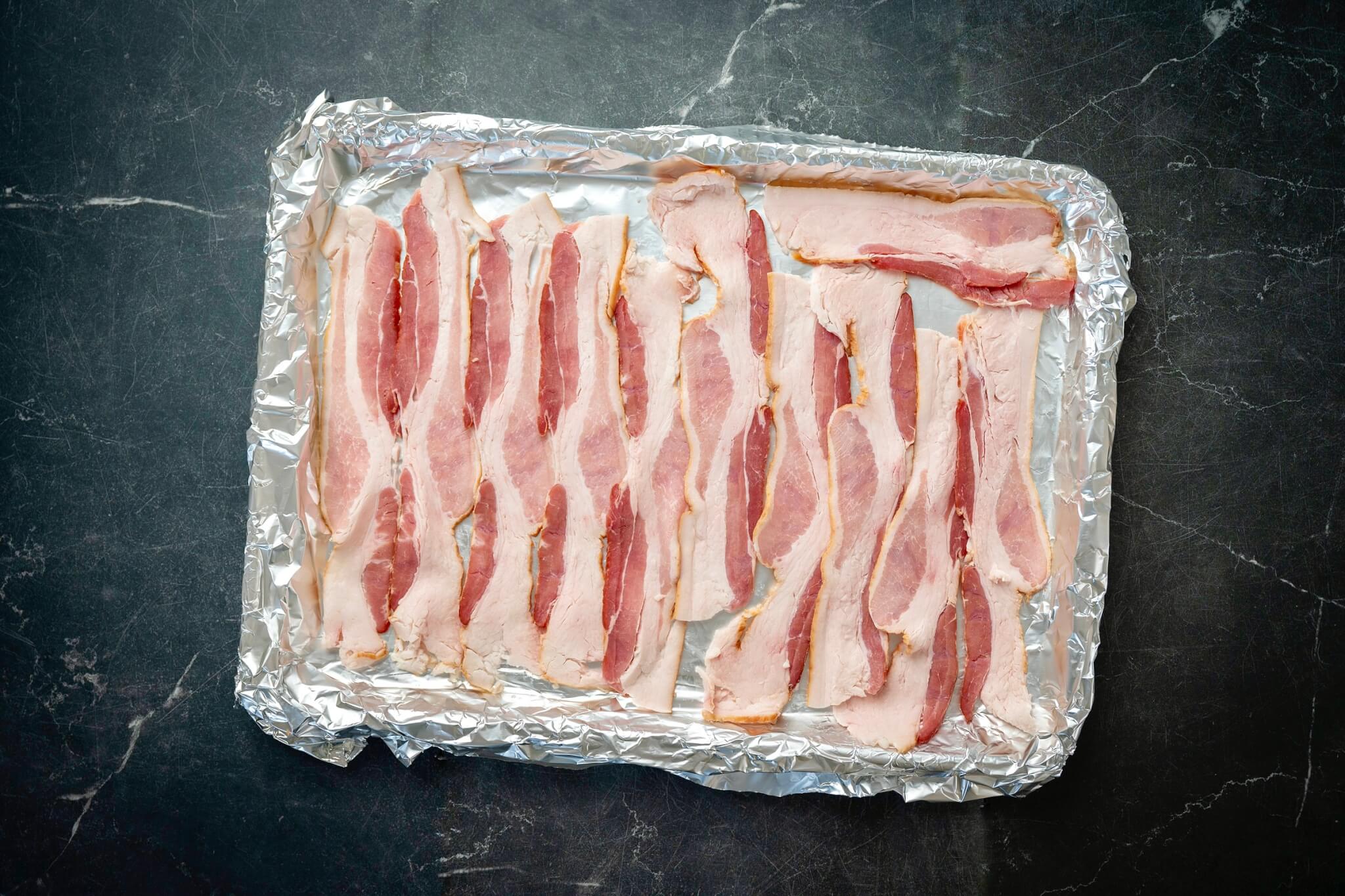 Note: You may choose to save the bacon grease. If so, carefully pour it into a heat-safe container. Otherwise, allow the grease to cool down in the baking sheet. Once cooled, the grease will solidify, making it easy to lift out the foil or parchment and discard.

*Using an oven-safe baking rack is an option if you’d like more of the grease to drain off the bacon while cooking. Note that in side-by-side tests (pictured below), bacon cooked in the grease did cook slightly faster and became more evenly crisp. To do this, however, use a rack that fits your baking sheet, arrange the bacon on the rack, and proceed. 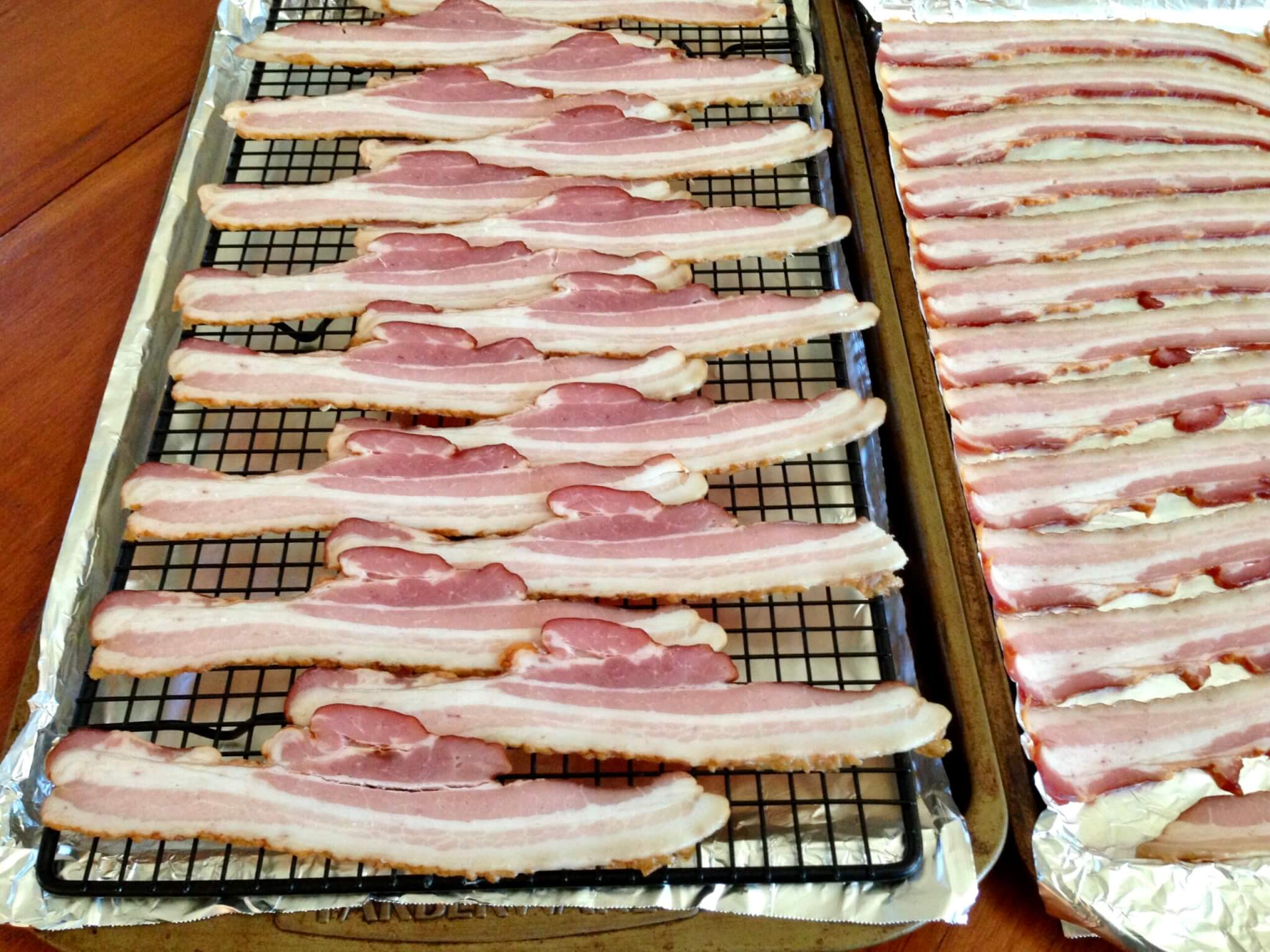 The pictures, above and below, depict a side-by-side test of cooking bacon on an elevated rack as well as directly on the sheet pan. Bacon laid directly on the pan cooks in the rendered grease and ultimately cooks more quickly and to a more even level of crispness. 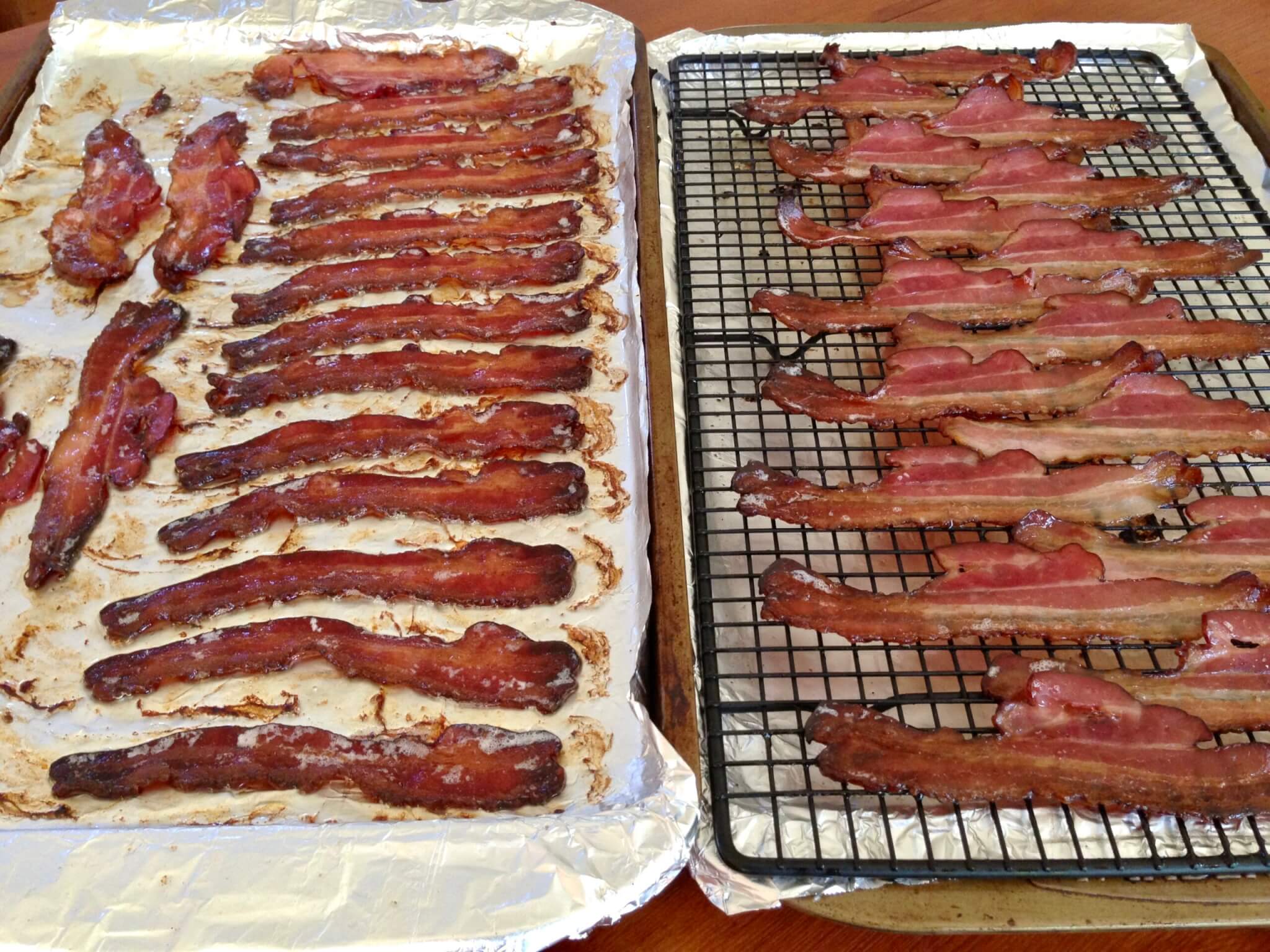 Why cook bacon in the oven?

A better question might be, “Why not cook bacon in the oven?” The benefits are plenty!

Consistency: I have found this method to be more consistent than other methods. Using the oven creates even heat all around the baking sheet, allowing the whole batch of bacon to cook more evenly.

Cooking for a crowd: When it comes to cooking large batches, using the oven really comes out on top. You can cook more bacon at one time with minimal oversight.

Hands-off: You don’t need to stand over a skillet or check the microwave over and over again. Since the oven does all the work, you have time to devote to other things!

Cleanup made easy: It’s hard to say no to something that makes cleaning easier. Using the oven hits on two factors: you need not deal with splatters all over the stovetop and, to clean up, simply allow the baking sheets to cool, then fold up and toss the grease-covered foil or parchment. Done!

Do you have to flip the bacon?

No! It is so easy. Just prepare the bacon, stick it in the oven and set the timer. Again, the oven does all the work, cooking the bacon evenly from end to end. 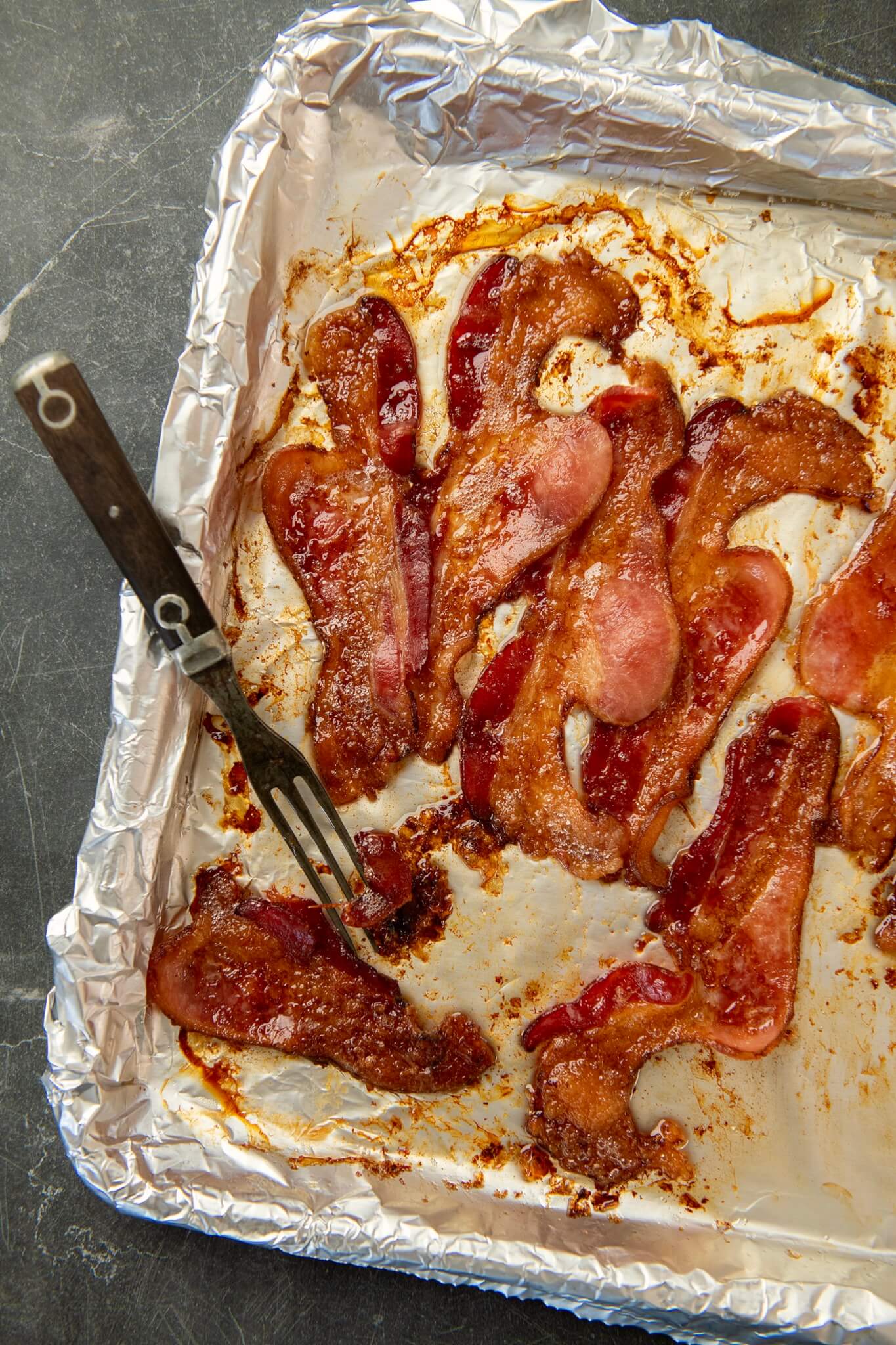 What are some other ways to cook bacon?

There are several ways to cook bacon. Aside from using the oven, a skillet or the microwave have certain merits.

The best way to cook bacon in a skillet: I’ve tested many methods of preparing bacon on the stovetop, and the key to the most evenly cooked, crisp bacon is bringing the bacon to the sizzling point over medium to medium-high heat, and then reducing to medium-low and allowing the fat to render and the bacon to fully crisp.

Cooking at a lower heat requires less monitoring, but it does takes time. The results, however, are exceptional. Because most skillets have hot spots, I find the bacon cooks more evenly when cut in half, which makes it easier to move around the pan.

The best way to cook bacon in a microwave:

Note: Times may vary depending on your microwave, the thickness of the bacon, the amount being cooked, and how crispy you like your bacon.

Conveniently, cooked bacon may be refrigerated or frozen and used as needed for various recipes.

For the fridge, allow the bacon to cool, place it in an airtight plastic bag or container, and store for up to 4-5 days.

If you’d like to keep the bacon a bit longer, store it in the freezer for up to 1 month. Again, allow the bacon to cool. Then, to prevent it from sticking together as it freezes, you have options:

The easiest way to reheat bacon is to take it straight from the fridge or freezer to the microwave. Line a microwave-safe plate with paper towels, place the bacon in a single layer, then top with another layer of paper towels. Microwave for about 20-40 seconds (time will vary depending on how the bacon was stored) and check for doneness. If it needs more time, continue microwaving in increments of 10 to 15 seconds.

You can also reheat the bacon in a skillet or in the oven. For the skillet, place your bacon in the skillet in a single layer and turn the heat to medium. Cook until the bacon is sizzling and hot.

For the oven, preheat to 350℉. Place the bacon in a single layer on a baking sheet and place in the oven for 8-10 minutes. Times will vary based on how the bacon was stored, your oven, and thickness of bacon, so start checking the bacon a minute or two early. Remove from the oven once it is hot. For either of these methods, transfer the bacon to a paper-towel lined plate.