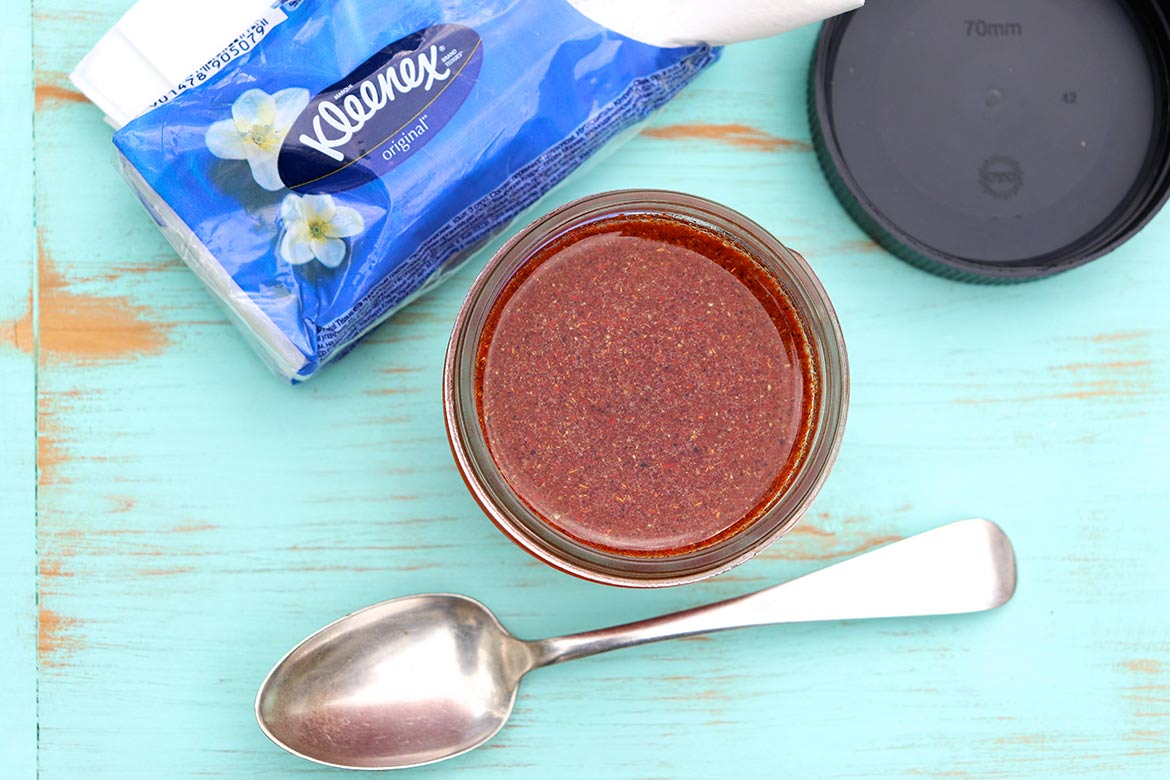 The holidays are full of family, friends, and good cheer. All the fun and festivities, however, seem to go hand-in-hand with a present none of us want—the common cold.

There’s no joy to be found in the common cold, and I’ve long been intrigued by any home remedy that claims to alleviate its symptoms. Several years ago, I shared a recipe for throat soothing honey lollipops, which received much positive feedback. Easy as they are, sometimes we need relief ASAP. A quick cough syrup variation passed along by a friend seemed like a welcome option.

My younger son was the first to try the homemade concoction when he caught a cold a few months ago. It didn’t cure his cold, but he thought the mildly tangy syrup eased his symptoms. Though he didn’t fully embrace the taste, he welcomed intermittent spoonfuls, thinking they truly helped.

A few days later, I took a dose at the first sign of a scratchy throat and by the next day felt fine. A good night’s sleep likely helped, too, but I sensed our new potion had merit.

Since I’m not a doctor, I asked my good friend and Page 8 pediatrician (for those who read my Sunday newspaper column) Pia Fenimore what she thought of the concoction, which relies on four convenient pantry ingredients that have long been associated with healing properties. Could there be a real benefit or was any perceived improvement merely a placebo effect? 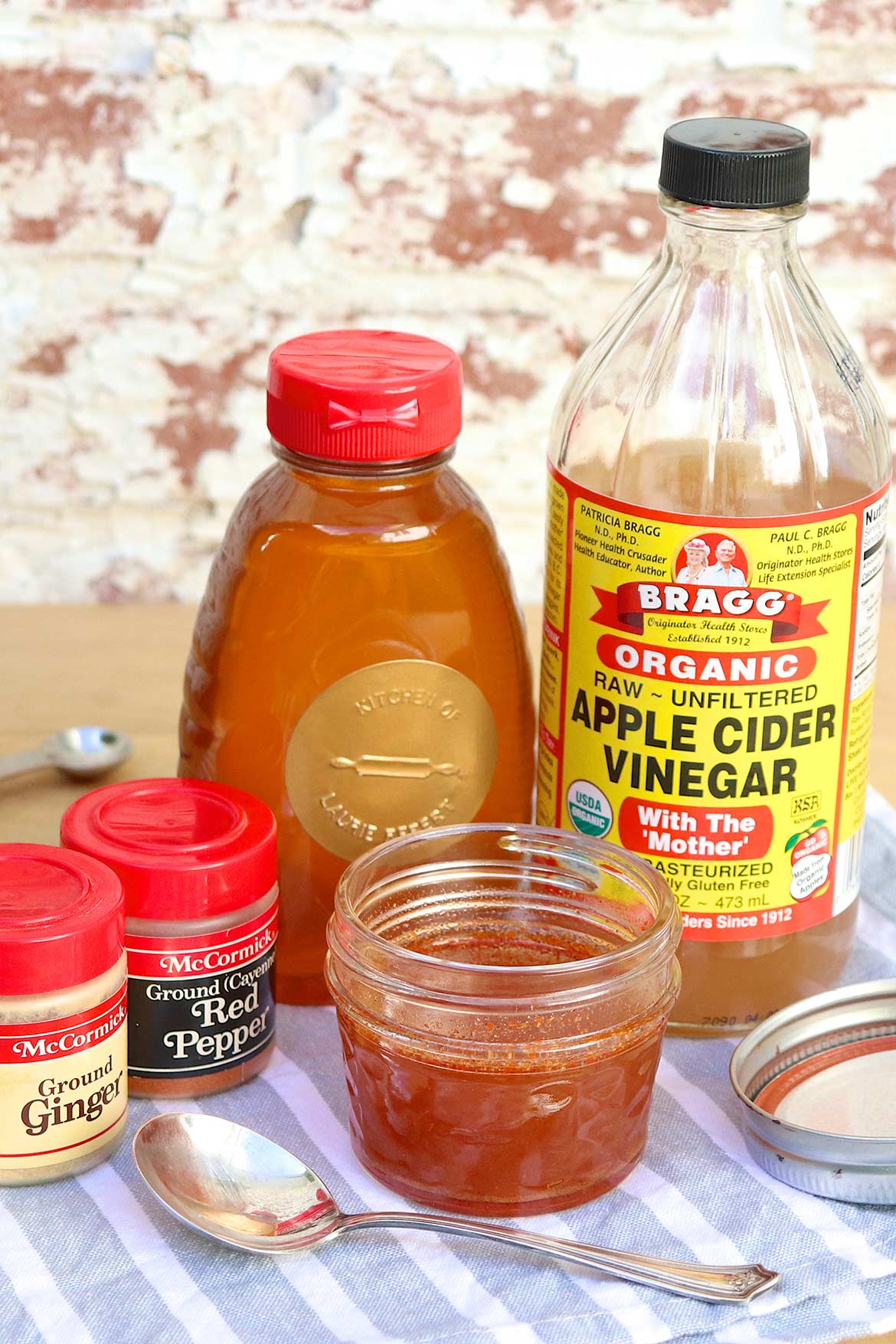 Without hesitation, Pia claimed to be a fan, saying she would much rather people treat their cold symptoms in the kitchen than in the pharmacy. For example, several studies have shown that a teaspoon of honey can effectively calm coughs and soothe sore throats. Honey should never be given to a child under the age of one due to the risk of botulism. However, in older children it can be a safe way to provide relief from viral induced coughs—and very few children will complain about the taste!

For centuries we have also known that ginger has multiple healing effects. Its anti-inflammatory properties are useful in the treatment of many conditions including arthritis and the common cold. Ginger also accumulates in the gastrointestinal tract, helping to cure nausea and upset stomachs.

Apple cider vinegar has long been considered a natural folk remedy, although there is less evidence as to how this inexpensive pantry staple affects the common cold.

Armed with Pia’s medical insight, I adjusted the ingredient ratios, placing more emphasis on those she favored. Happily, this resulted in improved taste. The tart vinegar cuts the sweetness of honey, but you could certainly omit for those who prefer a sweeter option. Similarly, the cayenne pepper could be reduced by half, or even eliminated, for those who are sensitive to spicy food. (I’d describe the taste as spicy, sweet, and lightly medicinal but still better than the over the counter syrups I’ve tried.)

Pia added that the efficacy of over the counter cold medicines has not been well documented and that they, like all medications, can have side effects, some of which can be dangerous. In her words, this homemade remedy is safer, less expensive and tastes better than most cold medicines so even if the benefit of this remedy is merely a placebo effect, she’s all for it.

Of course, some of the best things you can do to stay healthy this winter are wash your hands frequently, get plenty of sleep, eat a lot of fruits and vegetables, exercise, and get a flu shot! 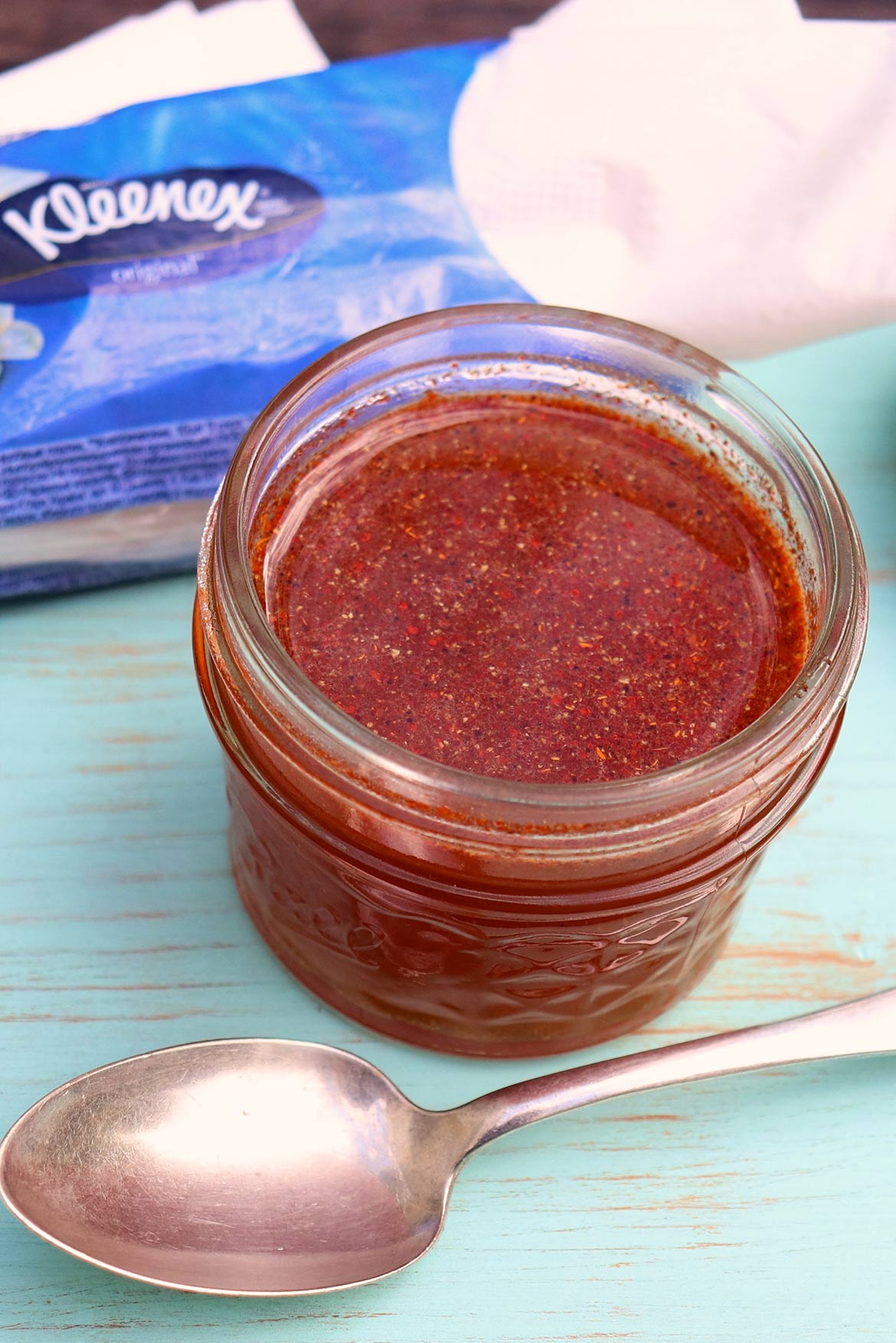 A few more thoughts from Pia…

Local honey might make a difference if you are using it to relieve allergies (studies are inconclusive on that) but does not matter for relieving cough/cold symptoms.

Children are much more smell oriented than adults. Scents such as lavender, vanilla, or orange have been shown to positively affect mood and energy levels in some kids.

Honey can be of great help in soothing an irritated throat as well as shortening the lifespan of a cold. The high amount of nutrients and enzymes in honey help kill bacteria and viruses that cause colds.

Ginger can be helpful in treating the common cold and its symptoms due to its antiviral, expectorant, and anti-inflammatory properties. 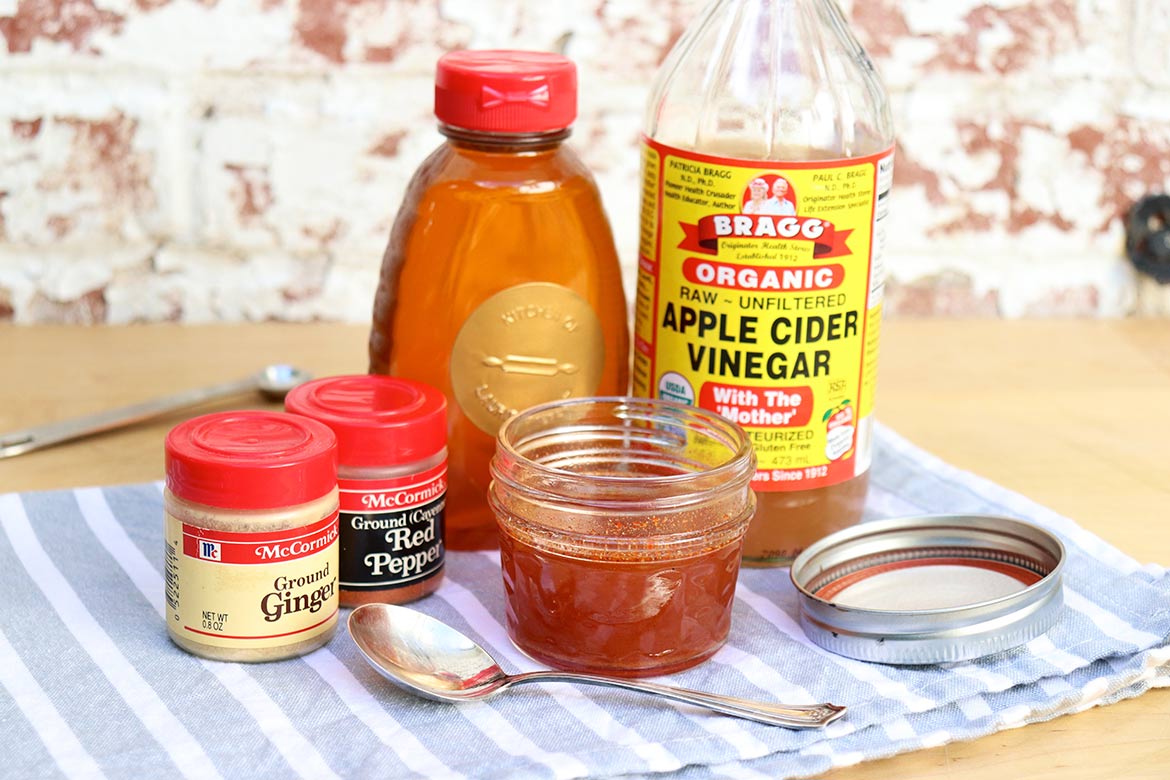 Place all of the ingredients in a small jar and shake or stir to combine. Keep at room temperature for several days or refrigerate for longer storage. Shake well or stir before using. The spices will incorporate without dissolving into the liquid, and the consistency will be like a thin syrup.

Take 1 tablespoon as needed (I like morning, noon, and night). Double or triple the recipe as needed.

*Honey should NEVER be given in any form to children under the age of one year, due to the risk of infant botulism.

**For those who are sensitive to spicy foods, you may wish to start with 1/8 teaspoon cayenne or simply omit. 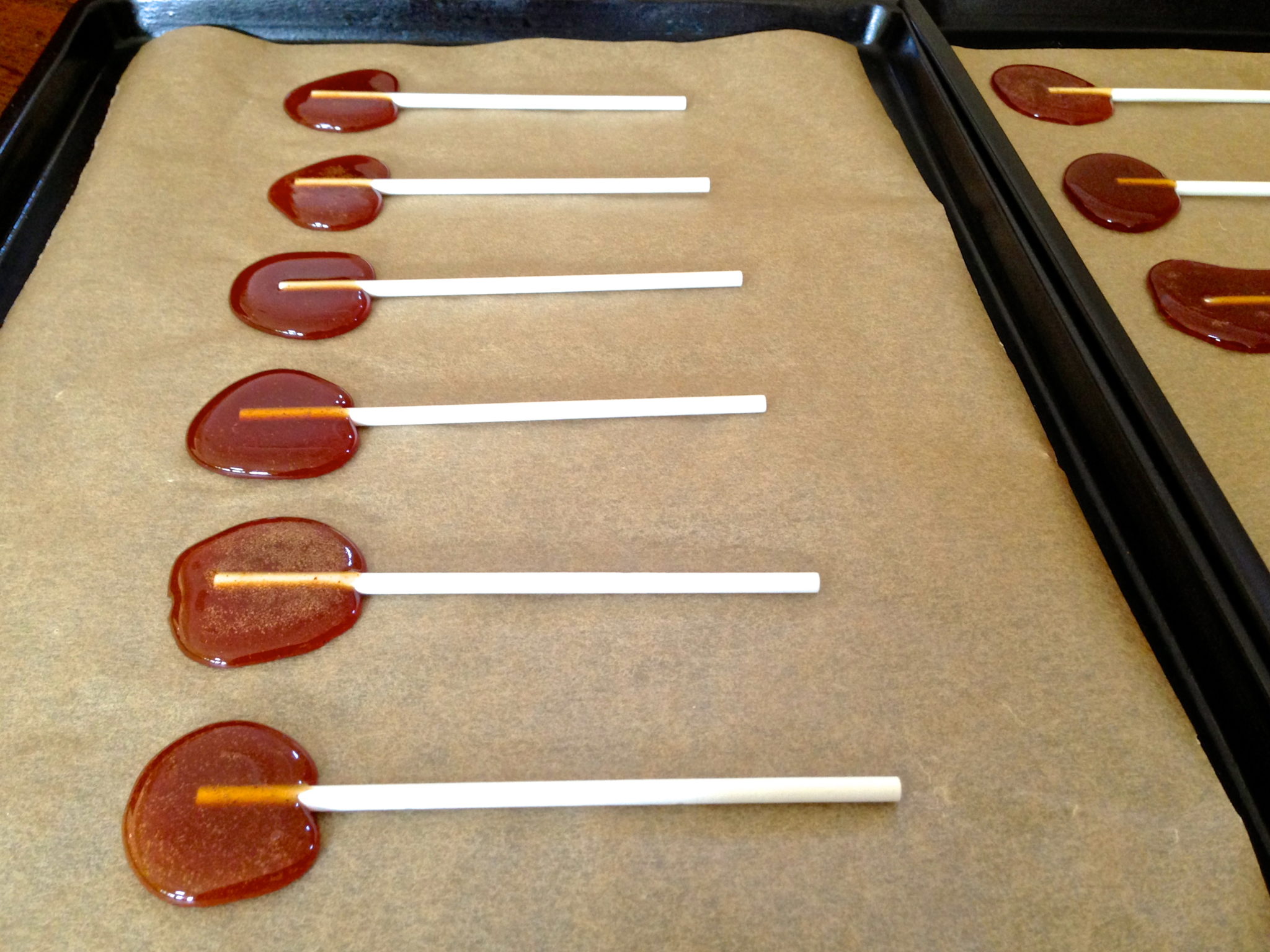