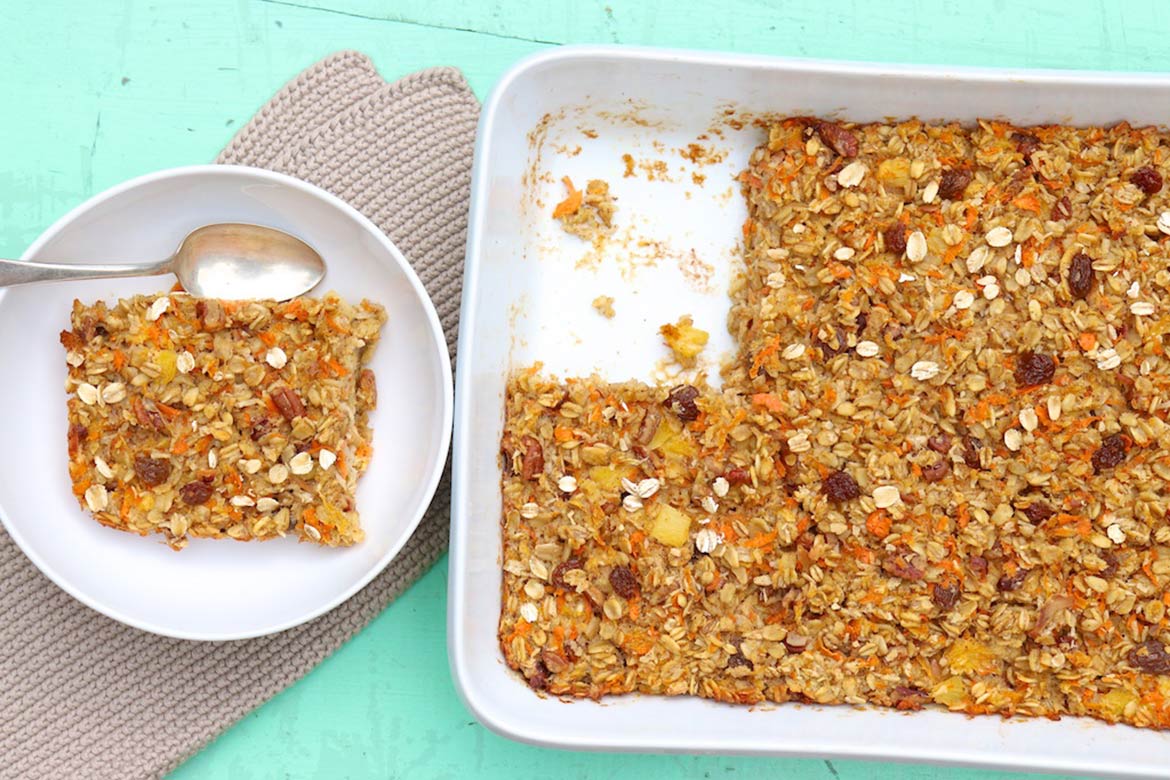 The warm, spiced flavors of the classic muffin find their way into a satisfying baked oatmeal for a healthy, make-ahead way to start your day!

In October of 2015, Kim asked via email if I happened to have a recipe for morning glory baked oatmeal. Kim mentioned that her brother had purchased something similar from Zig’s Bakery at Lancaster Central Market and kindly shared some with her. It was love at first bite, and she wanted to make some on her own.

Morning glory muffins found their fame in the early 1980s after an appearance in Gourmet Magazine. Pam McKinstry had created the recipe several years prior to serve the patrons of her Morning Glory Café on Nantucket. In 1991 the muffins were chosen as one of the magazine’s 25 favorite recipes from the past 50 years.

And no wonder. The flavorful muffins are lightly spiced and loaded with nourishing fruit, veggies, and nuts. When transformed into baked oatmeal, hearty whole-grain oats replace the flour, supplying added nutrients and staying power.

As luck would have it, I was in the formative stages of a carrot cake baked oatmeal that was quite similar to Kim’s request. I emailed my recipe to Kim, mentioning that it was still a work in progress. My family had enjoyed the recipe as written, but I had a few adjustments in mind, so I mentioned those in case Kim wanted to try. 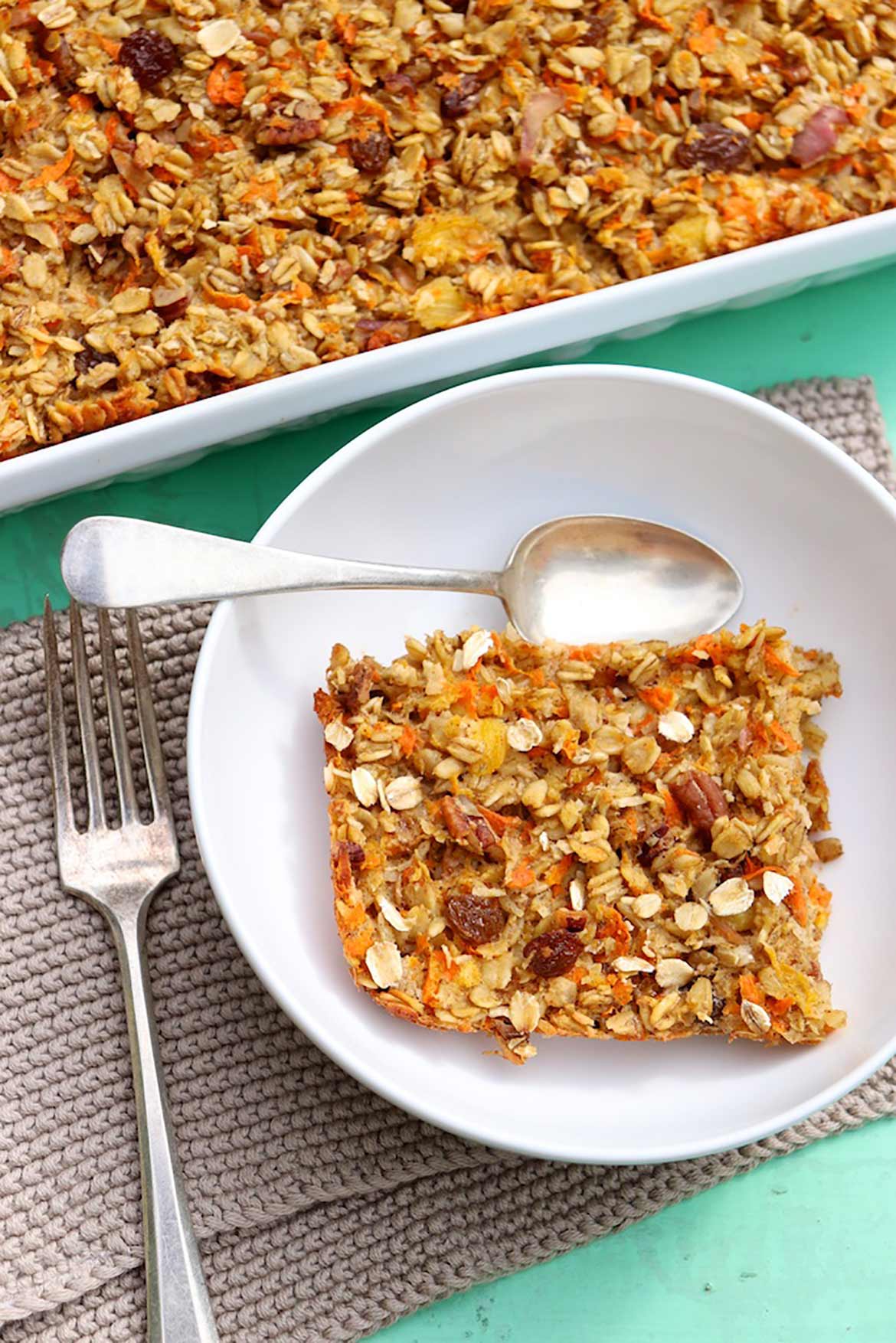 In Kim’s words, the oatmeal was excellent. So you may be wondering why it took me two years to share the recipe!

Baking is regarded as an exact science, yet years of trial and error have taught me that baked oatmeal recipes tend to be both flexible and forgiving. Accordingly, every time I made this recipe, I’d adjust a factor to see if I could make it better.

After experimenting with varying quantities of eggs, oats, fruit, sweetener, oil, spices—and changing the type of sweetener and oil—I ended up with versions that were all slightly different but all quite tasty. Ultimately, nobody could choose which variation was the “the best.”

With the return of cool mornings, the warming flavor of this recipe began calling my name, and I went back to my recipe notes. After making no less than six casseroles in the past month (and looking forward to breakfast each and every morning), I decided it was time to publish.

The recipe below is chock-full of healthy add-ins and relies as much as possible on the fruit’s natural sweetness. I reduced the brown sugar to the lowest amount that my kids still enjoy, but you could reduce it further if preferred. Conversely, if you find the finished product not sweet enough, add an extra sprinkle of sugar or drizzle of maple syrup on top, and then bump up the sugar by a few tablespoons the next time. Similarly, if you prefer an all-natural sweetener, use maple syrup or honey in place of the brown sugar. You’re probably starting to get the point! 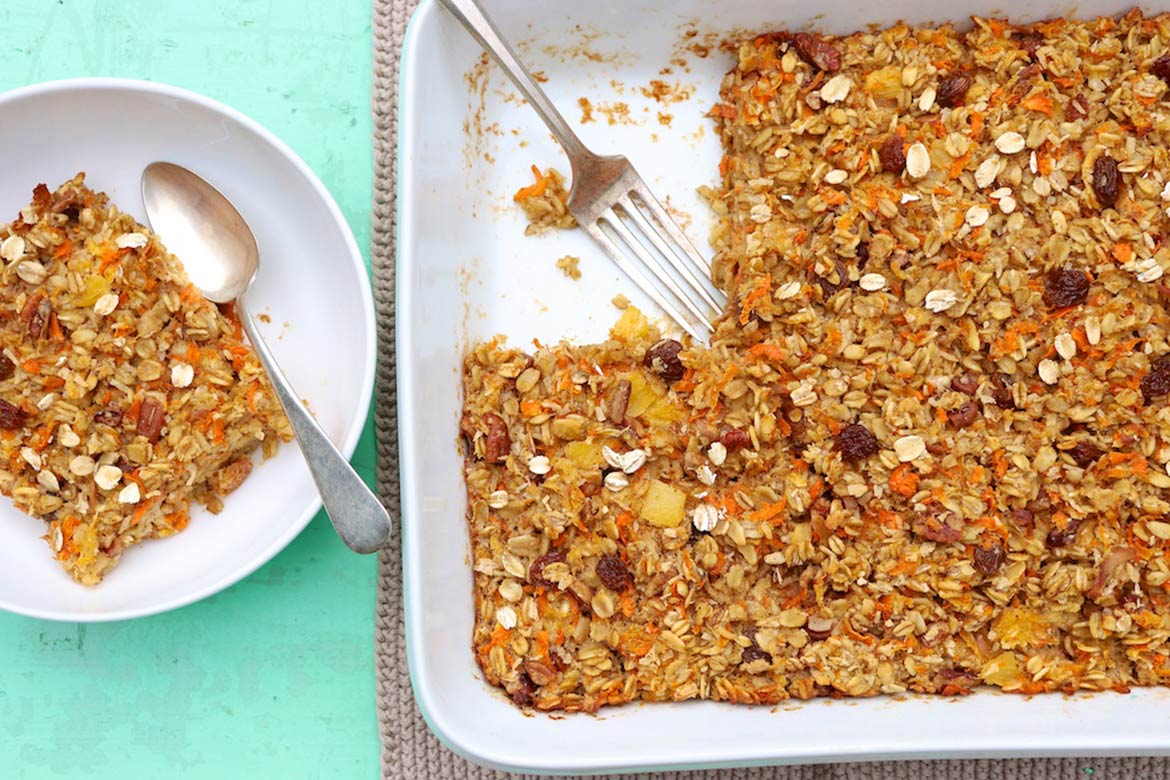 But there’s more. Two eggs will do the job; three provides more binding power with a bit more denseness. If you don’t like coconut, skip it. If you don’t do dairy, use almond or coconut milk (we do eat dairy, but I often bake with Silk’s unsweetened almond-coconut milk and enjoy its subtle flavor).

Initially, I thought an eight-ounce can of crushed pineapple was a bit too much, so I reduced it to half a can. After all the other changes, I increased the amount incrementally and ended right back at the whole can (which conveniently avoids unneeded extras). If you’re tempted to use less, simply make up for the difference with extra liquid, be it in the form of milk or even an egg.

A fresh, sweet apple adds excellent flavor and moisture to the oatmeal. In a pinch you could use a four-ounce cup of applesauce. Still, you’ll need the get out the grater for the carrots. I consider them non-negotiable, and the store-bought, pre-shredded variety tends to be a bit too coarse and dry for this application.

So while I encourage you to make the following recipe as written and am optimistic that you will enjoy it as much as we do, I’m giving you full permission to tweak the recipe according to personal preference. The odds of success are in your favor!

The recipe makes a big pan-full, and the flavor improves over time. After the oatmeal has completely cooled, I cover and store it in the refrigerator where it will keep for the better part of a week. It freezes well, too. 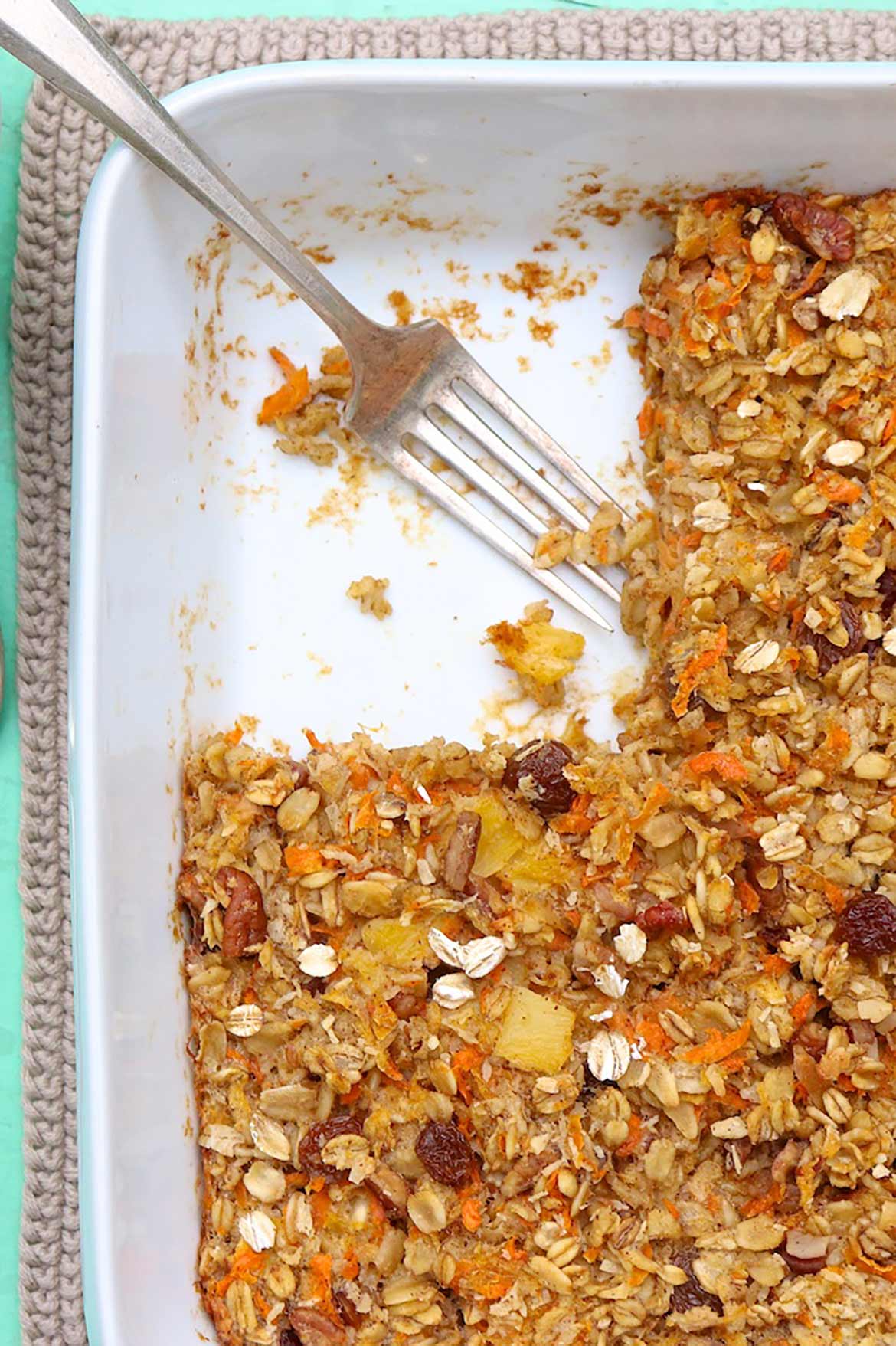 Morning Glory Baked Oatmeal
Feel free to bake a day ahead to have a delicious breakfast at the ready. While the baked oatmeal is fantastic hot out of the oven, the flavors meld overnight and it's equally good--some say better!--the next day. The baked oatmeal will keep for about a week in the refrigerator, if it lasts that long, and may be frozen.

For similar flavors, you may enjoy my carrot cake recipe, which is made with almond flour and naturally gluten-free… 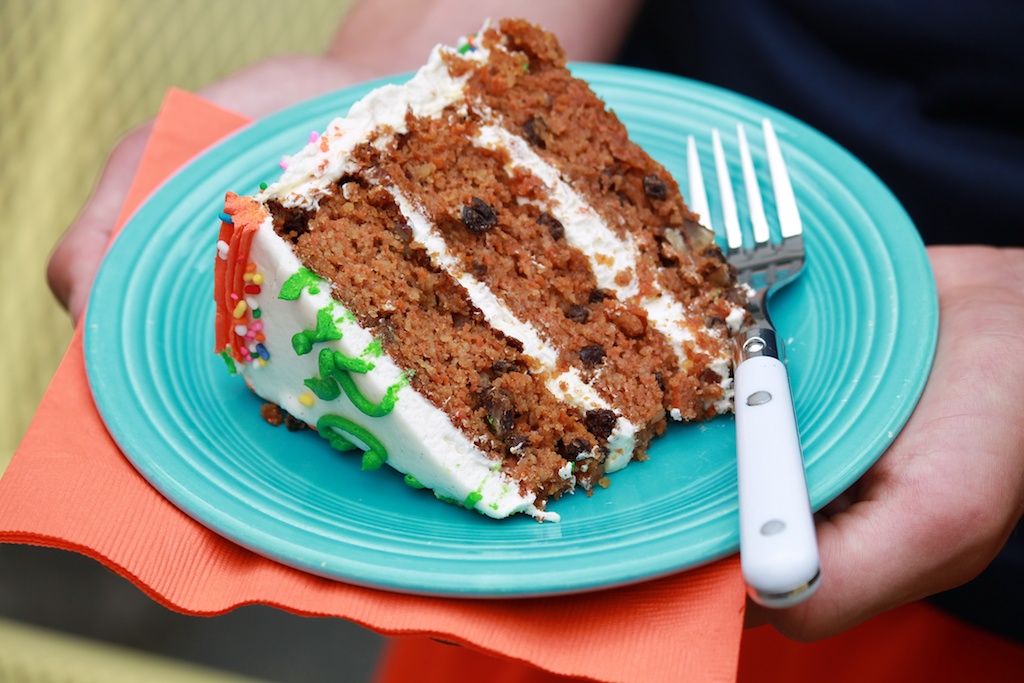 …or these wholesome muffins. The muffins are healthy yet so tasty, I sometimes frost them and serve as cupcakes! 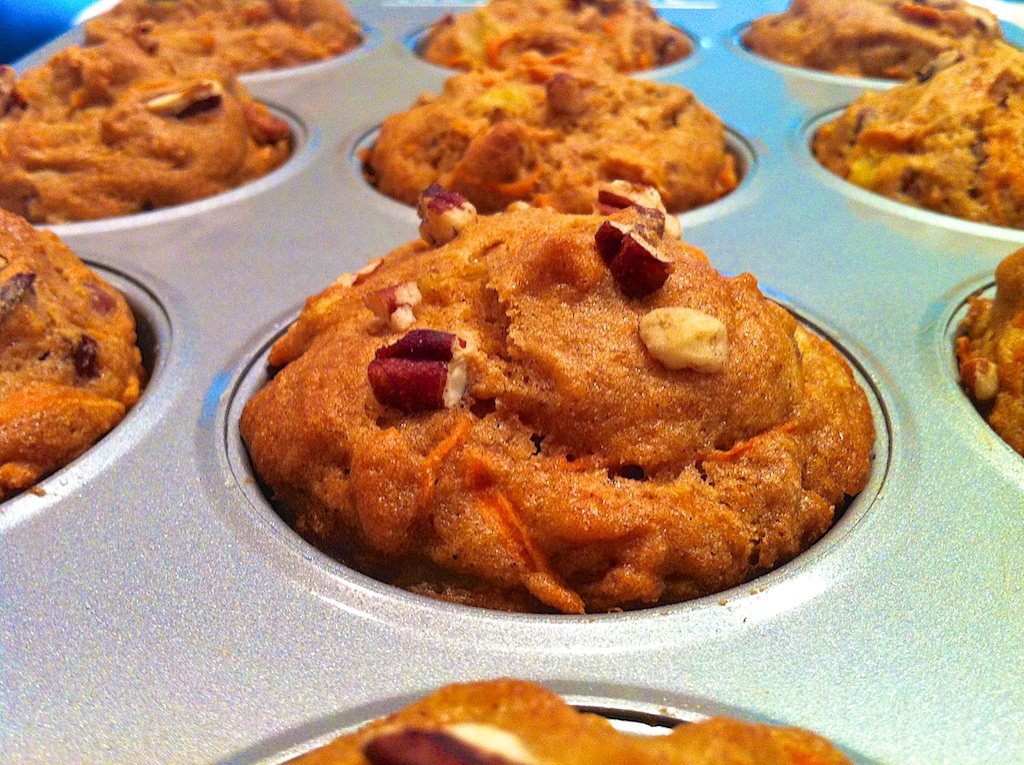