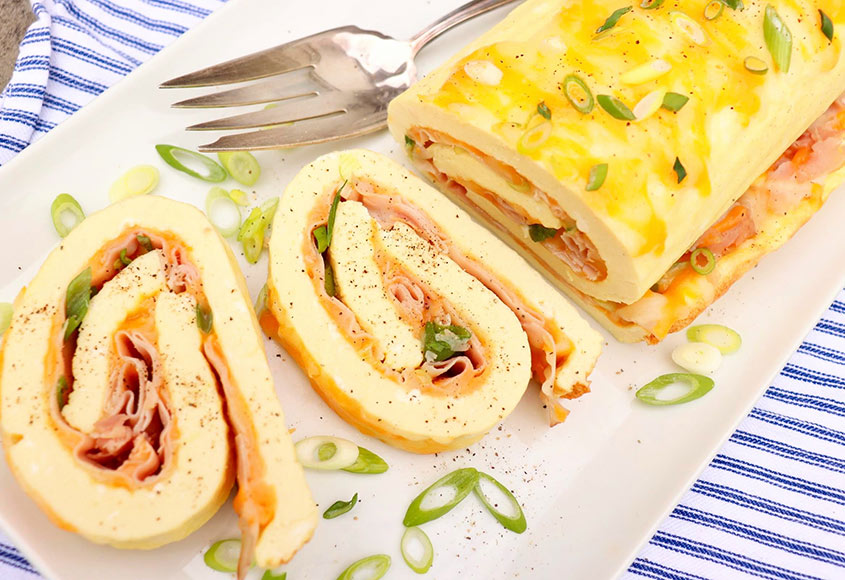 Perfect for holidays, special brunches and breakfast for dinner, this festive roll offers a fuss-free alternative to making omelets for a crowd. For added convenience, the egg mixture can be prepared well in advance.

Perfect for holidays, special brunches and breakfast for dinner, this protein-rich meal is like making an omelet for a crowd. The rolled nature may suggest complexity, but do not be deterred. The method is quite simple, the ingredients are basic and much of the prep can be done in advance.

Aunt Peggy (of spiced pecan fame!) was having a little consternation about what to make a friend who was recovering from surgery. She wanted to deliver breakfast food, and eyeballed two recipes given to her many years ago by a co-worker.

Later that day, she emailed me a photo of blueberry baked oatmeal and muffins along with a Word doc including the recipes she briefly considered. While the co-worker assured her that the recipes were terrific, Aunt Peg just wasn’t sure. She opted for a known variable (the baked oatmeal) but wondered if I might be interested in testing these recipes that she’d saved for upwards of 10 years.

I’d do just about anything for my Aunt Peggy; I was up for the challenge.

Truth be told, one of the recipes, a “cottage cheese roast,” did appear questionable. The other, a sort of baked omelet for a crowd that included a fancy presentation, seemed to have potential.

(Note: If there are any takers on the cottage cheese roast, I will gladly email the recipe to you. Please send feedback!)

When I finished my first test run on the omelet roll, I packaged some of it, grabbed my earphones (remember the podcast mention on the Favorite Things post?) and set out for a destination walk. Happily, my aunt and uncle live nearby.

Aunt Peggy gave the recipe, which I’ve adjusted in small ways from the original, much praise and was kicking herself for having sat on such a gem all these years. 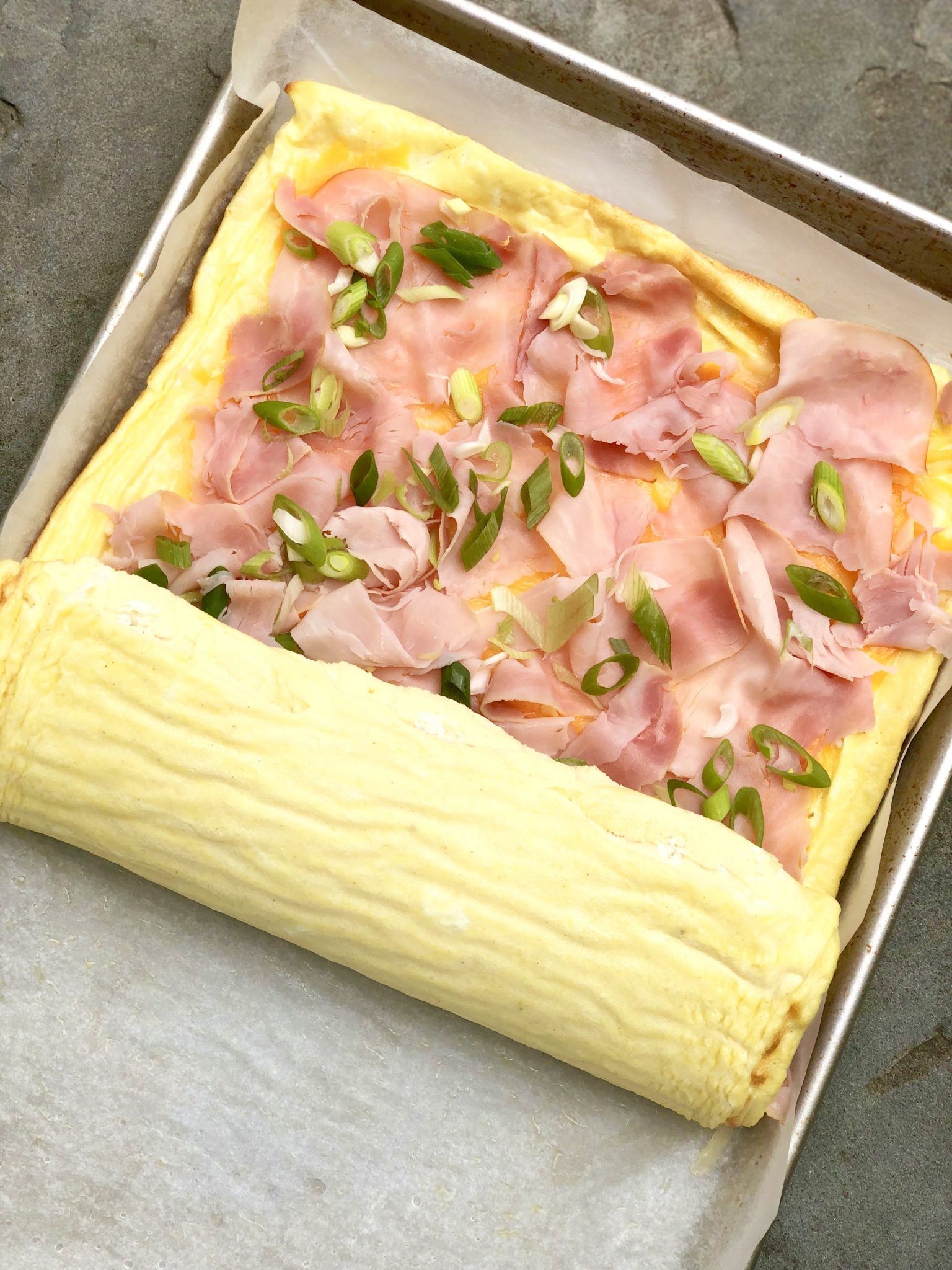 Parchment paper makes for easy cleanup and helps guide the baked eggs as you roll. 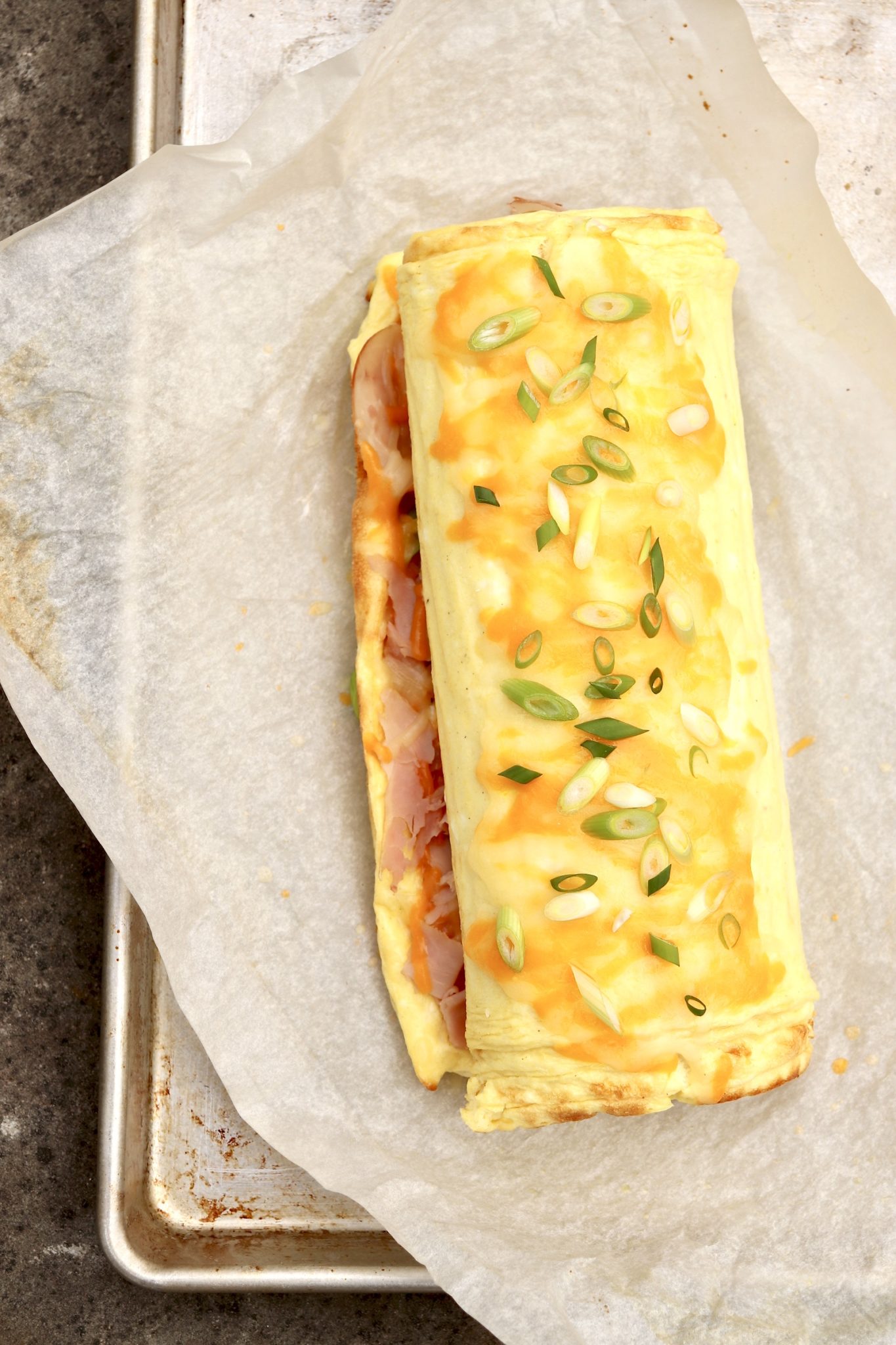 Delightful on its own with a side of fruit or toast (or a green vegetable if served for dinner), we decided that a thick slice would make a great egg sandwich. Avocado slices complement nicely. My aunt agreed and offered up a dollop of salsa, too.

Since that initial test run, my family has enjoyed the omelet roll for breakfast and dinner. Leftovers are delightful in that aforementioned sandwich any time of day. For me, the inherent versatility adds to the convenience and overall appeal of the recipe. 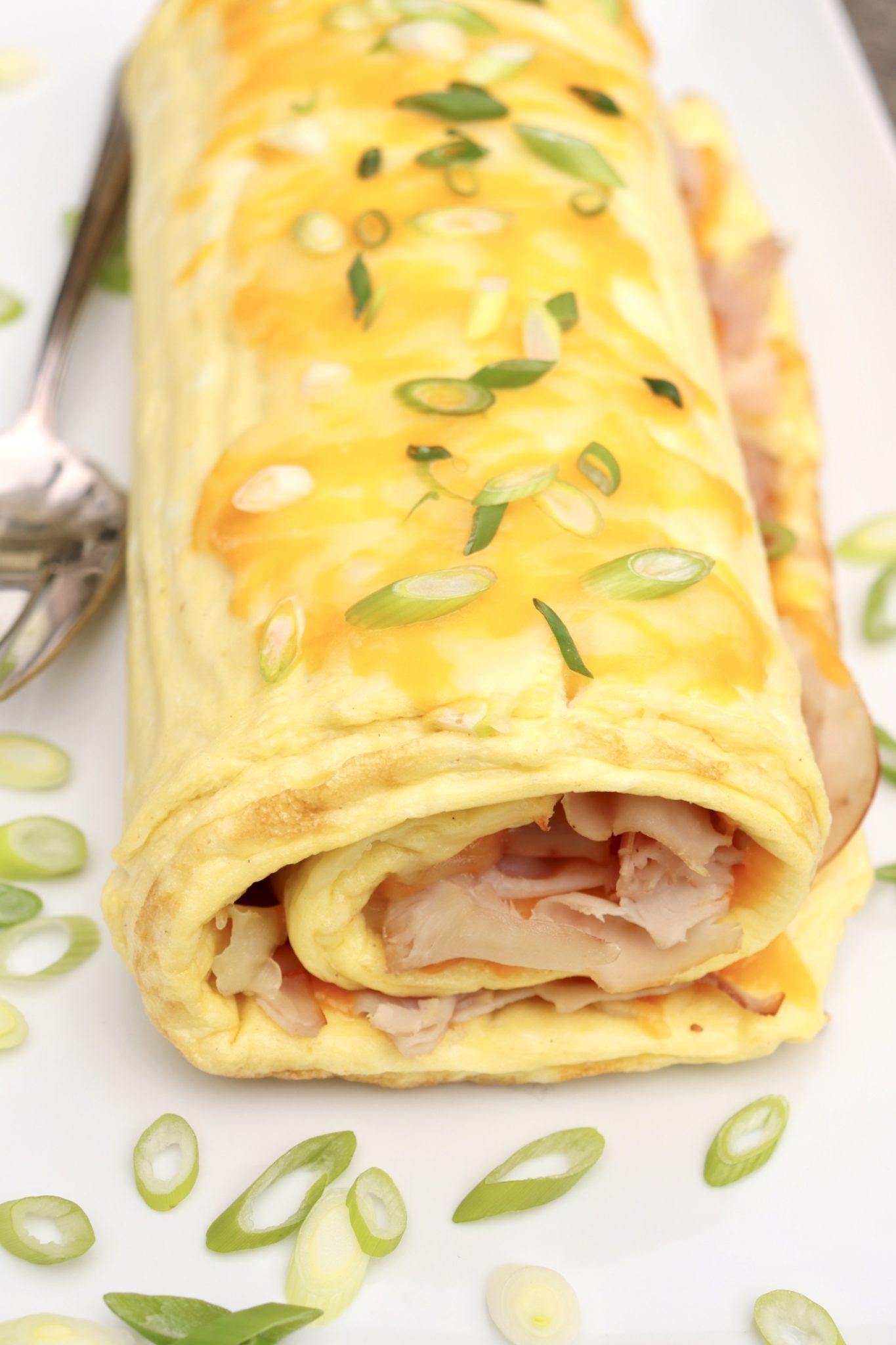 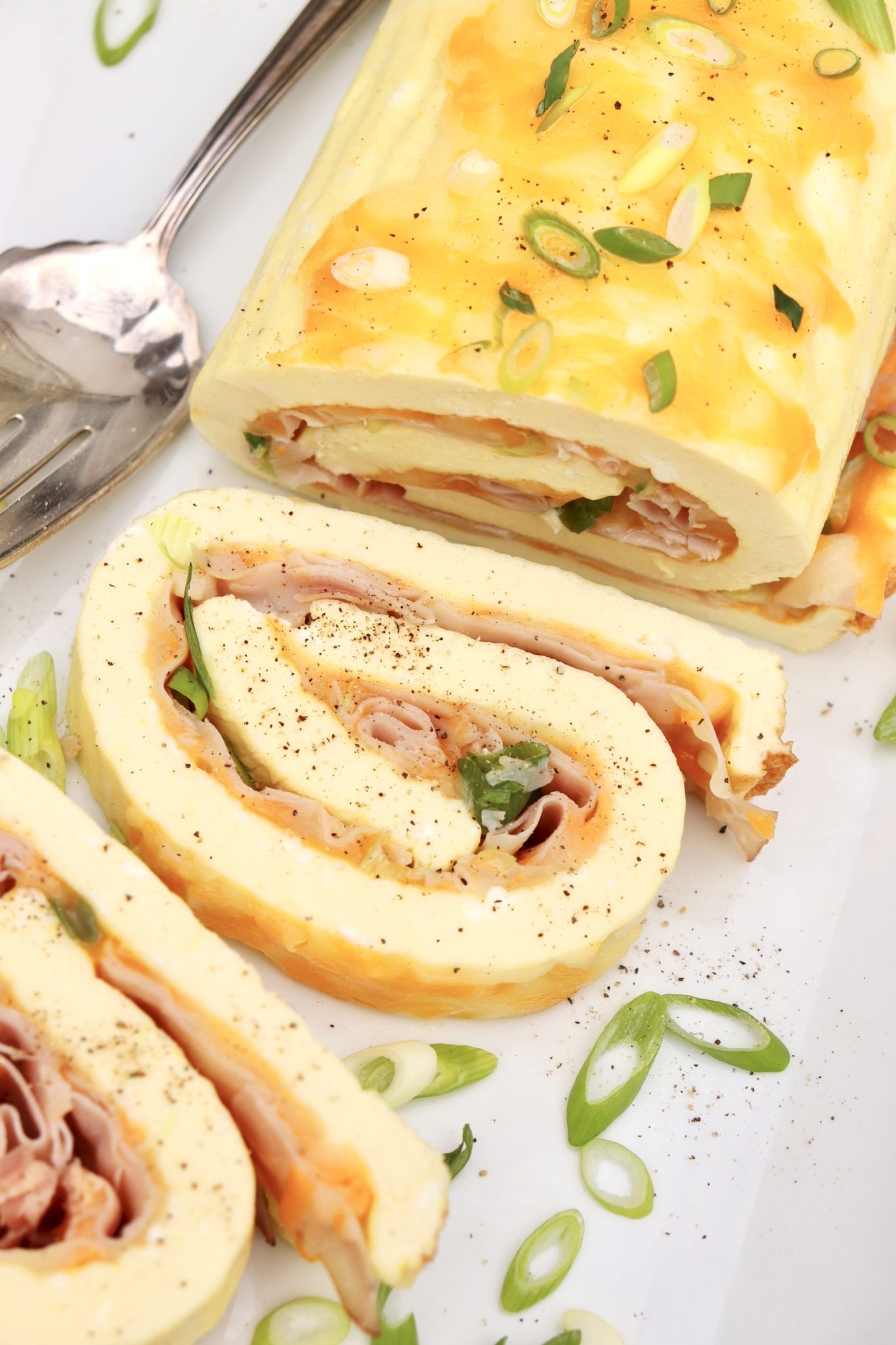 Preheat the oven to 375 degrees F. Line a 15”x10”x1” baking sheet with parchment paper so that the paper extends an inch or so higher than the sides; grease or spray the paper and set aside. (Tip: I fold the paper along the edges of the pan to make it conform better to the pan. The protruding edges will help when rolling later.)

Add the flour, Dijon, salt and several good grinds of the pepper mill; mix until combined. Beat or whisk in the eggs until well blended. (Prep ahead tip: at this point the egg mixture may be covered and refrigerated. I’ve refrigerated for about 5 hours but think overnight would be fine.)

Pour into the prepared pan, and bake for 20 minutes, or until the eggs are puffed and just set.

Remove from the oven. Sprinkle with 1½ cups of the cheese, and then lay the ham evenly over the surface and sprinkle with the green onions.

Using the parchment as an aid, roll up the short side, peeling the paper away while rolling. Sprinkle top of the roll with the remaining cheese, and bake for 3-4 minutes or until the cheese is melted. Sprinkle with some sliced green onions, if desired, and then slice and enjoy. The roll may be served warm or room temperature.

•The size of the pan is important in order for the cooked eggs to be the right thickness, width and length to roll. Measure to be sure. If using with a different size pan, note that cooking time may go up or down and a smaller egg layer will be more difficult to roll.
•Don’t omit the flour (although a gluten-free substitute may be used) as the small amount helps make the baked egg layer slightly more pliable.
•That said, the roll might crack in places as you’re rolling. Do not worry. Just keep rolling. Small cracks where the eggs are more tightly rolled are inevitable and will be hidden as you continue to roll.

Confused by all the different types of baking sheets?

As mentioned in the recipe notes, the size of the pan is important in order for the cooked eggs to be the right thickness, width and length to roll. Following is a list of the various pans that look similar but can sometimes make a difference in the outcome of a given recipe: