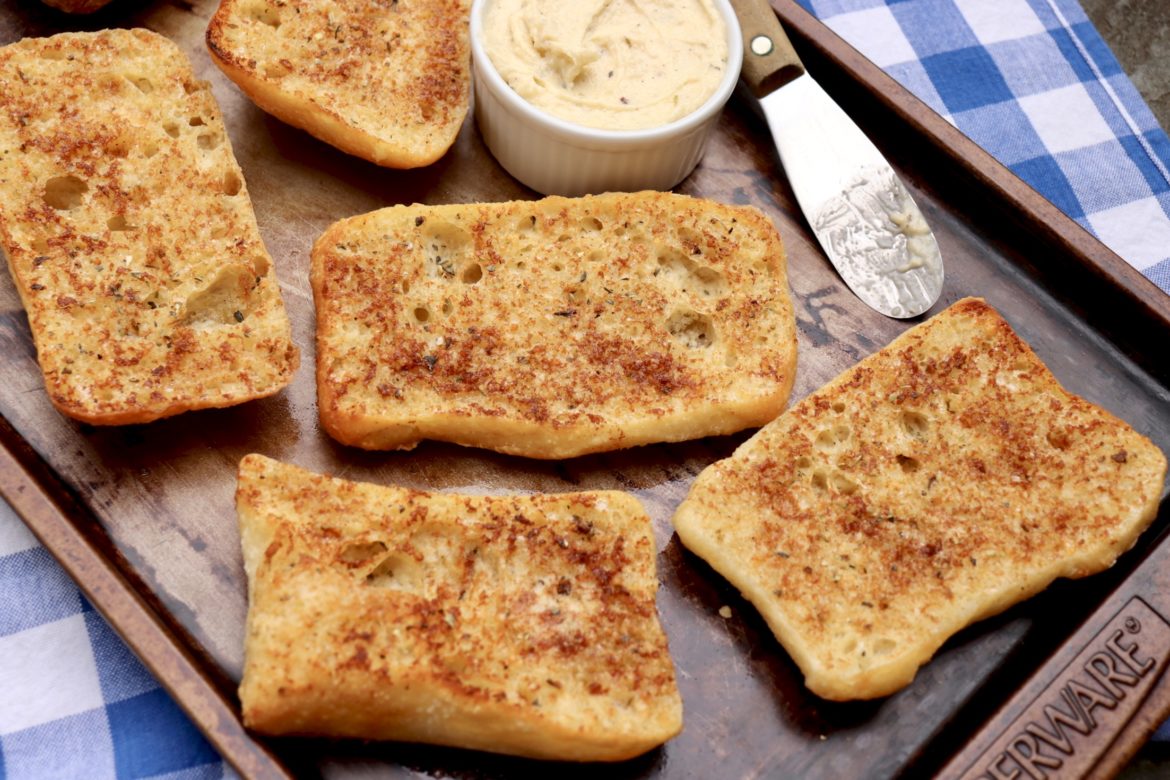 An unexpected ingredient makes for better browning in this flavor-packed Parmesan spread, which can be kept on hand for a quick, crowd-pleasing side to soups, pastas and salads－and feel free to use with a variety of breads beyond the customary baguette.

Garlic bread is to spaghetti what milk is to cereal. Ok…maybe a toasty piece of buttered bread isn’t that critical to pasta success, but they do complement each other quite nicely.

While my family is thrilled when I serve the following recipe alongside spaghetti, they are equally delighted when it appears alongside a bowl of soup or a hearty dinner salad. In fact, I would venture to say that this savory bread is appreciated a little bit more when offered with the latter.

Generally speaking, pasta dishes tend to be heavier and more decadent than the typical soup or salad fare, and a little something special on the side can balance out a lighter meal quite nicely.

We often hear that we should fill half of our dinner plate with colorful vegetables and divide the remaining half equally between lean protein and a grain-based or starchy side dish. (Anyone else remember when that plate used to be divided into three equal portions?😳)

I do aim for generous servings of vegetables at dinnertime and find that, for the sake of variety, my family often enjoys a good piece of bread in lieu of a starchy side like rice or potatoes. On busy nights, it’s also a quicker alternative.

A freshly baked loaf of artisanal bread is always a treat, but sometimes life calls for a more practical approach. I like to keep a few backups stashed in the freezer to quickly thaw when needed. 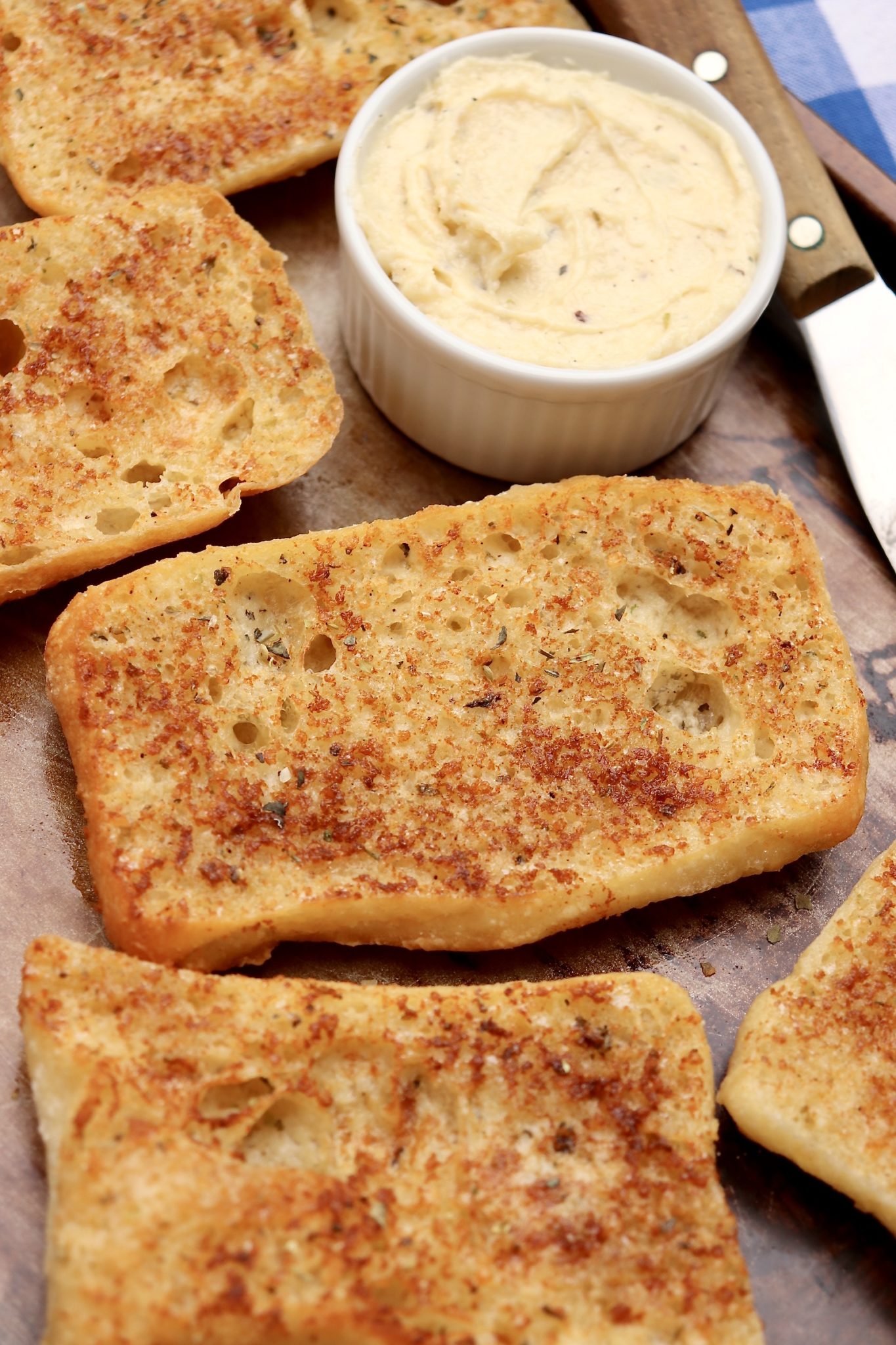 A few leftover slices of a hearty, whole grain bread, a bag of rolls from Thom’s Bread at Central Market (pictured above; I recommend if you’re local), or－and I kid you not!－leftover hot dogs rolls.

Hot dog rolls subbing for fancy French bread became a thing years ago to deal with the reality that, whenever we grill hot dogs and hamburgers, we always seem to end up with leftover hot dog rolls.

Treating them like mini baguettes and smearing a thin layer of the following Parmesan spread on each half and then toasting or broiling to crisp perfection elevates that humble hot dog roll quite nicely. (There’s built-in portion control, too!)

All this is to say that while a really good traditional garlic bread recipe is a key addition to anyone’s recipe box, that recipe can absolutely be served in unexpected ways, too.

As for the unexpected ingredient I mentioned earlier? A small amount of mayonnaise mixed into the Parmesan-butter mixture ramps up the flavor and allows for better browning. We eat with our eyes too, as they say, and those golden brown flecks add to the visual appeal.

Rest assured that, while mayo does add something special to this spread, the flavor can in no way be detected in the finished product. 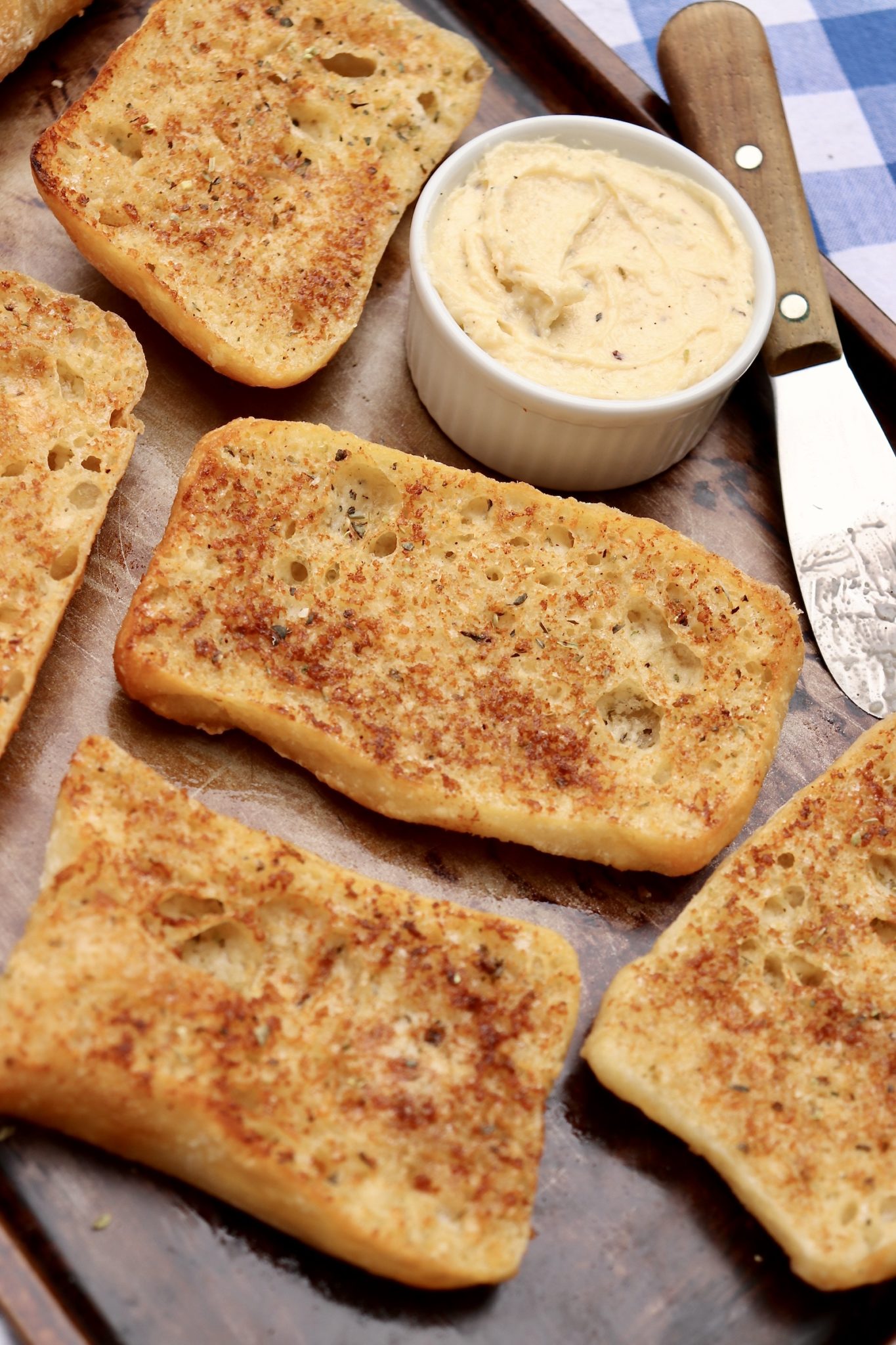 All of the ingredients in this spread have a long refrigerator life, so feel free to double or triple the recipe to have on hand. From there, enjoy this toasty bread as a traditional accompaniment to spaghetti and meatballs－and then remember it as a simple side to soup or a summer salad…when you’re most likely to have a few extra hot dog rolls that need not go to waste!

Finding new ways to enjoy old recipes is never a bad thing, so if you think of clever ways to enjoy this or any of my other recipes, please report back! 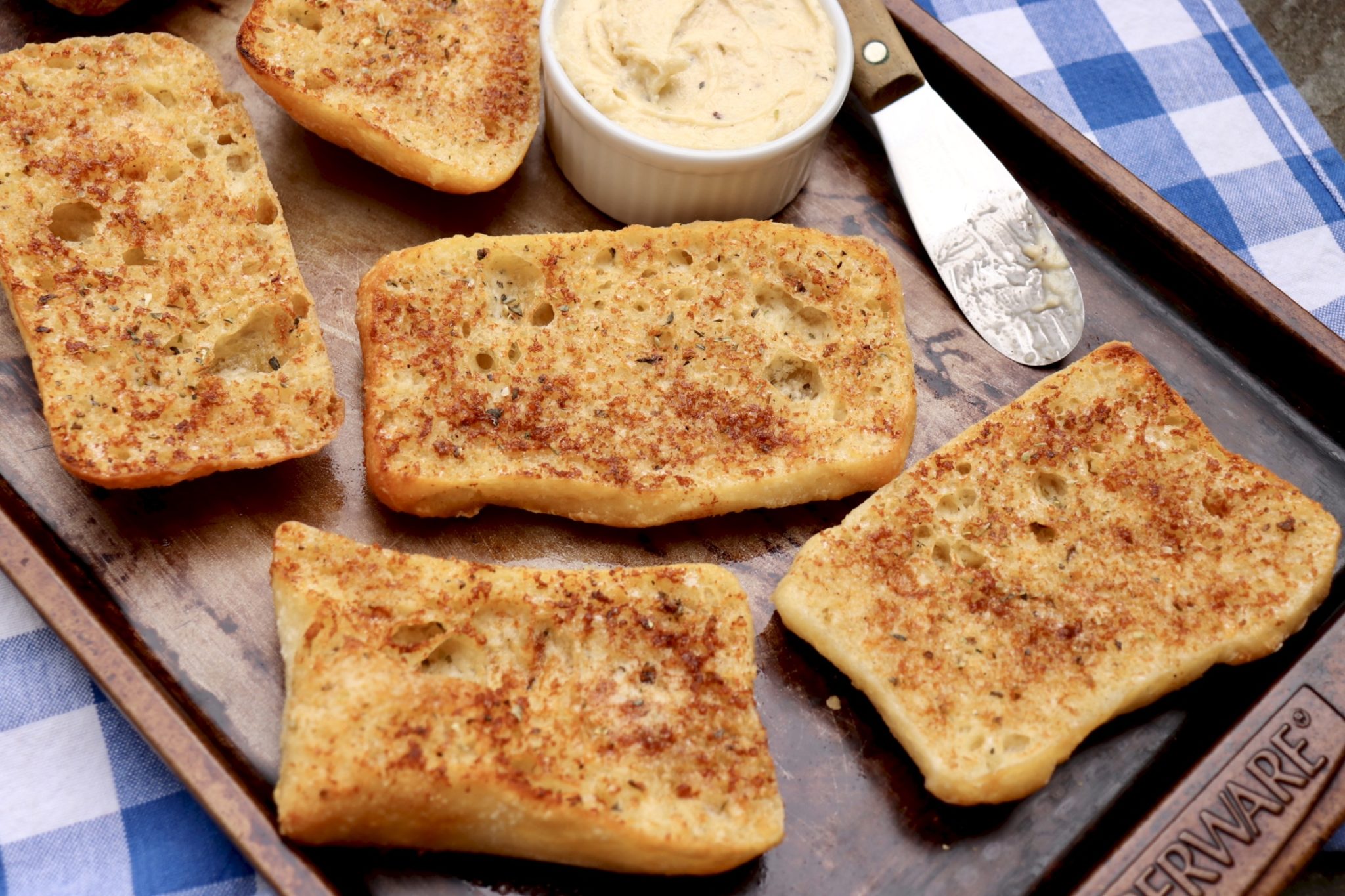 Parmesan Garlic Bread
Yield: 4-6 servings
The small amount of mayonnaise used in this family favorite spread enhances the flavor and allows for better browning. Spread the mixture on a halved baguette or use as needed on individual slices of crusty bread – even leftover hot dog rolls!
Print
Ingredients
Instructions

Preheat the broiler to low. In a small bowl, mix the butter, Parmesan, mayonnaise, and garlic powder. Add a few turns of the pepper mill and a pinch or two of the Italian seasoning if desired. (You can also sprinkle a little of the Italian seasoning over the mixture before placing the bread in the oven.) The mixture may be made in advance and held at room temperature for up to 2 hours or refrigerated and returned to room temperature prior to proceeding.

Cut the baguette in half both crossways and horizontally. Evenly spread the cheese mixture over the bread. Place on a baking sheet and broil until golden, about 3 minutes. (If your broiler only has a high setting, it won’t take that long－and all ovens vary so watch closely!)

Tip: If your bread is not particularly fresh, you may prefer to bake the bread at 350℉ for 10 minutes to crisp it up a bit. Then broil for a minute or so if you’d like a little more golden brown color on top.

•Covered tightly, the spread will keep in the refrigerator for several weeks. For easy spreading, bring to room temperature before using.

•Because of its long refrigerator life, I often double the recipe to have on hand and use as needed.

Beyond the usual soups and pasta recipes pictured below, we often pair this bread with a protein-rich dinner salad for a little extra oomph. 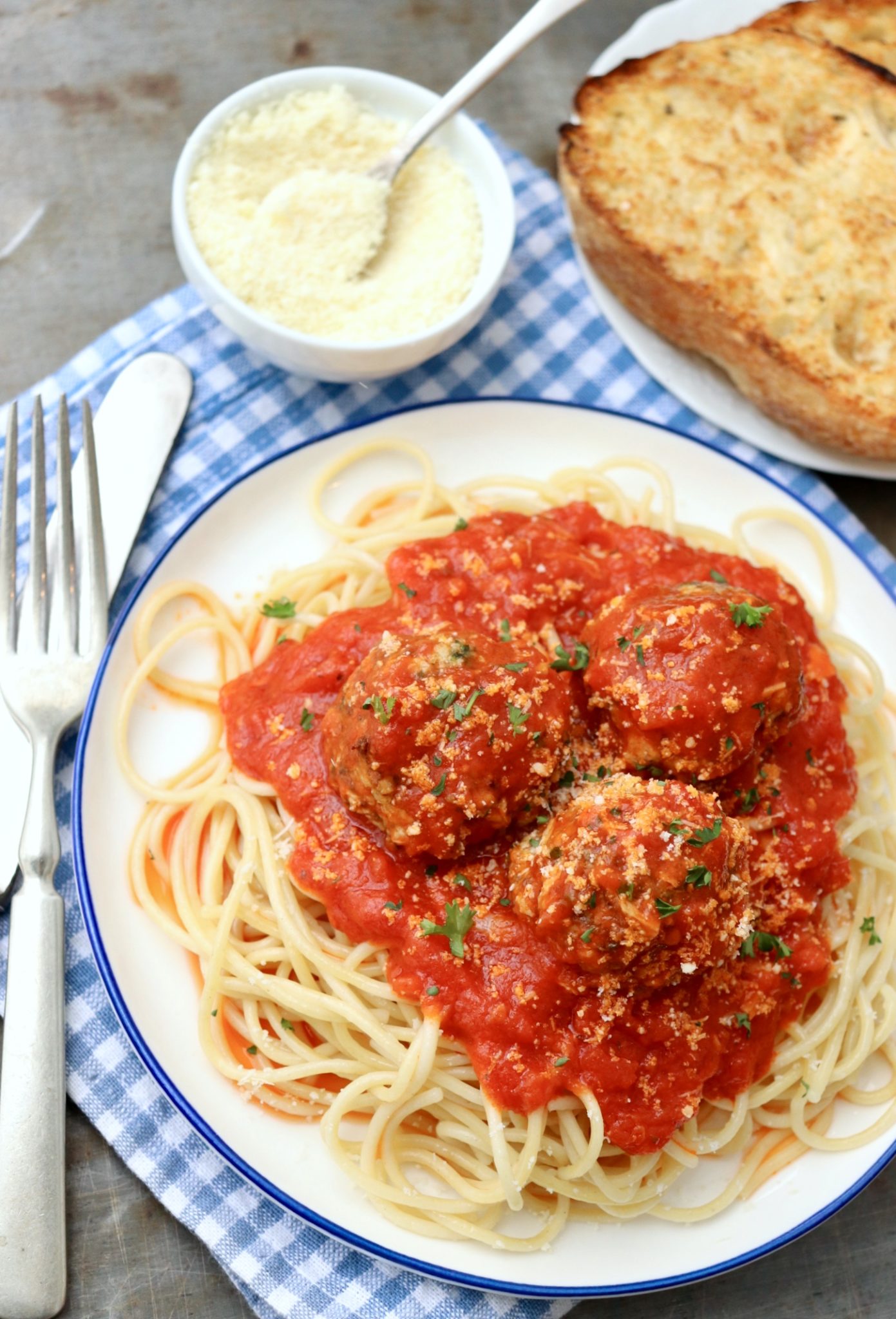 …and a crunchy piece of bread makes a heartier meal out of a variety of soups, like Shortcut Vegetable Beef Soup. 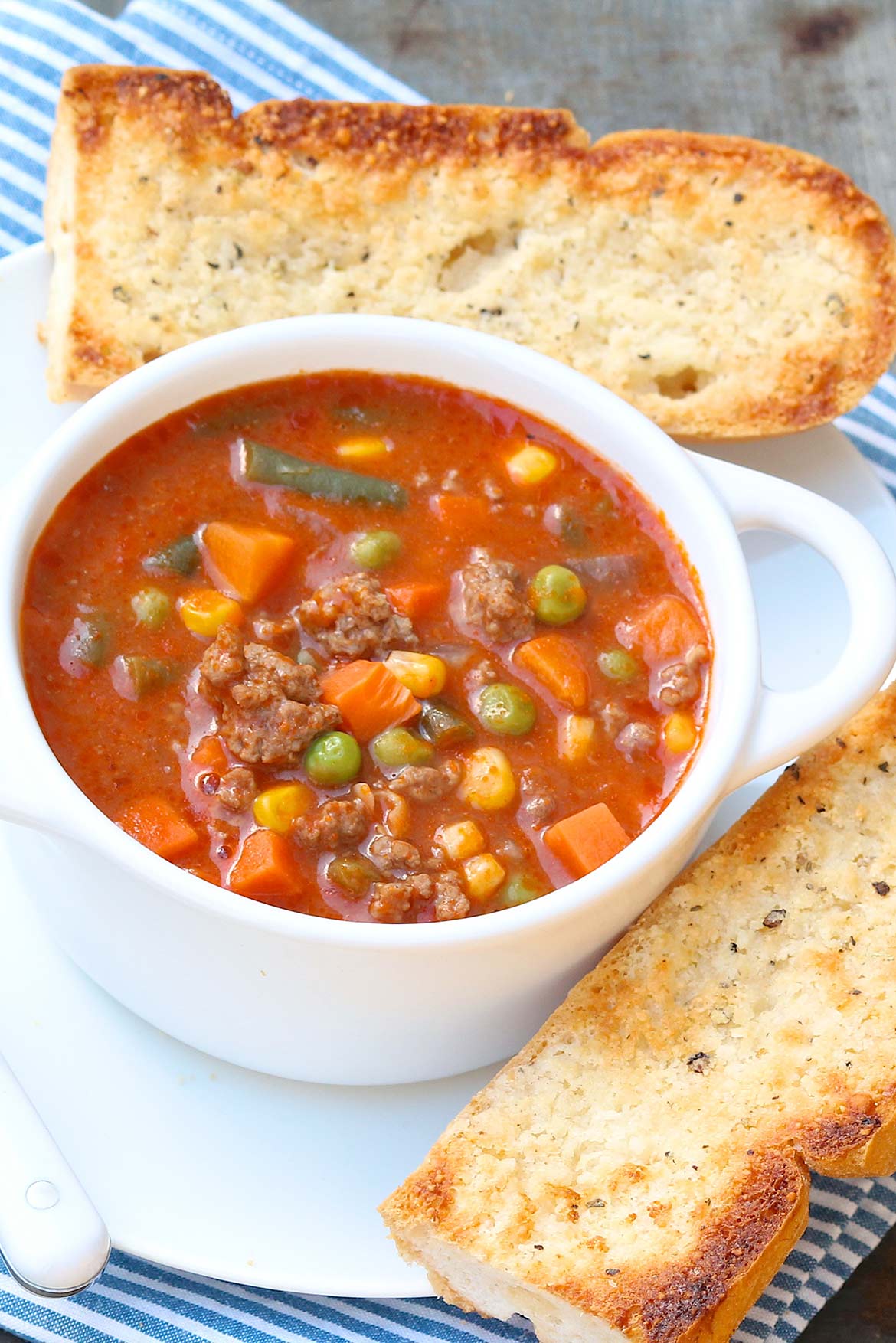