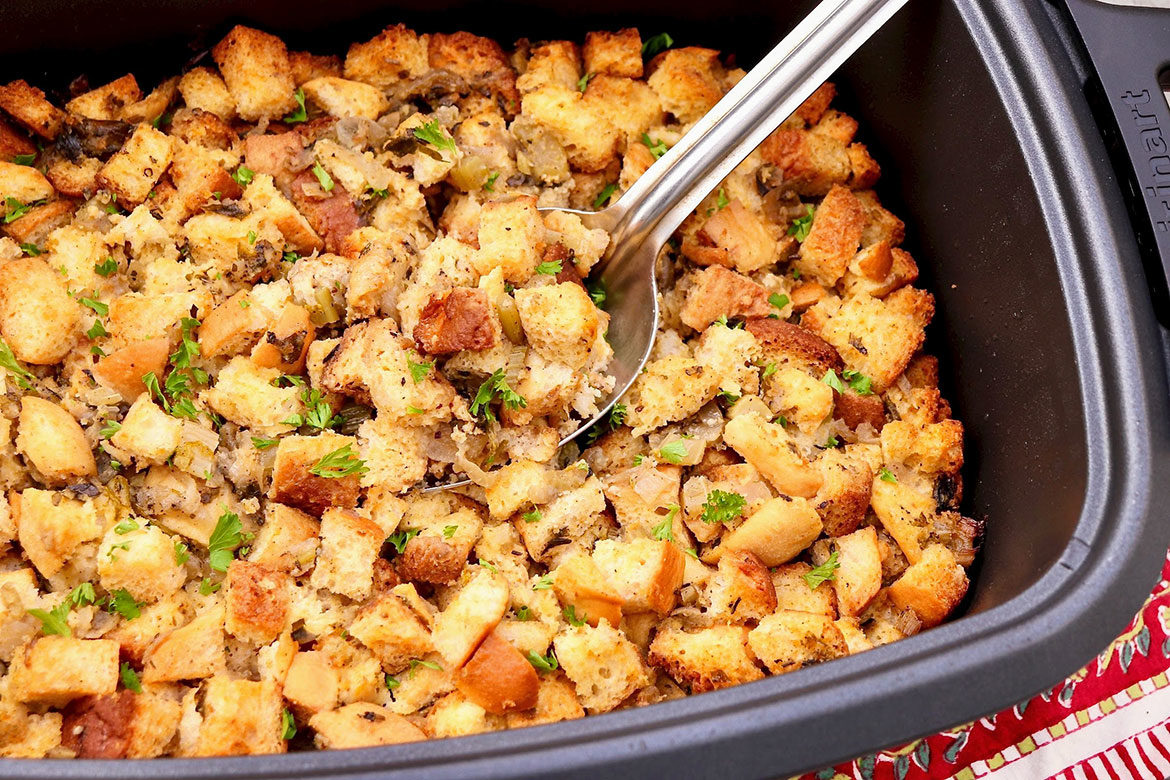 Tender stuffing with crispy edges is 100% possible in a slow cooker, freeing up precious oven space. The classic flavor is sure to please, and the optional add-ins and prep-ahead tips offer something extra for everyone. (Including gluten- and dairy-free suggestions that all will enjoy!)

As a girl, stuffing was always my favorite part of the Thanksgiving meal. My mom and grandmother’s recipe was basic but bursting with classic flavor, not to mention the ideal balance of tender bread with lightly crunchy edges.

My mom never varied her recipe. My grandmother, however, liked to try everything at least once. Accordingly, her classic recipe was occasionally studded with extras such as chestnuts, sausage, mushrooms or dried fruit. (Happily for me, oysters made just one appearance!)

One thing that never changed was the delightful interplay between the crisp surface and the tender insides. (To clarify, my family always called this side dish stuffing, not dressing, whether it was cooked in or out of the turkey. Happily, with both methods, there was always some of both.)

Though a slow cooker offered appeal－namely freeing up oven space and the ability to keep the finished dish warm－I avoided it for many years because I figured the crunchy layer would be lost.

But then a friend told me that a slow cooker can, in fact, create those beloved crispy edges.

By nature, slow cookers hold in moisture (sort of like cooking it in a turkey). But while the insides and surface of the stuffing stay tender with this method, the sides and bottom－all the areas that are in direct contact with the walls of the cooker－become toasty and lightly crisp. (Tip: coating the cooker with olive oil or cooking spray amplifies this crispness.)

It made total sense. And It’s truly the best of both worlds!

For my own recipe, I settled on a variation of what my mom and grandmother used to make, combined with the convenience and inherent benefits of a slow cooker.

To enhance the traditional flavor, I add more herbs, which can be dried or fresh to suit what you have on hand. We’ve also mastered gluten- and dairy-free adaptations along the way.

And though most of us save this perennial favorite for Thanksgiving, my family and I are quite happy to enjoy it any time of year. Most recently, I served it as an alternative to crusty bread with a simple cabbage and sausage stew. Some enjoyed dunking it into the light broth, while others kept it separate－everyone, however, wanted a larger serving. Another evening, I served the leftovers aside a mound of roasted Brussels sprouts for a speedy meal…and no one complained!

Following is a step-by-step photo overview of the easy method along with a list of helpful hints and the printable recipe: 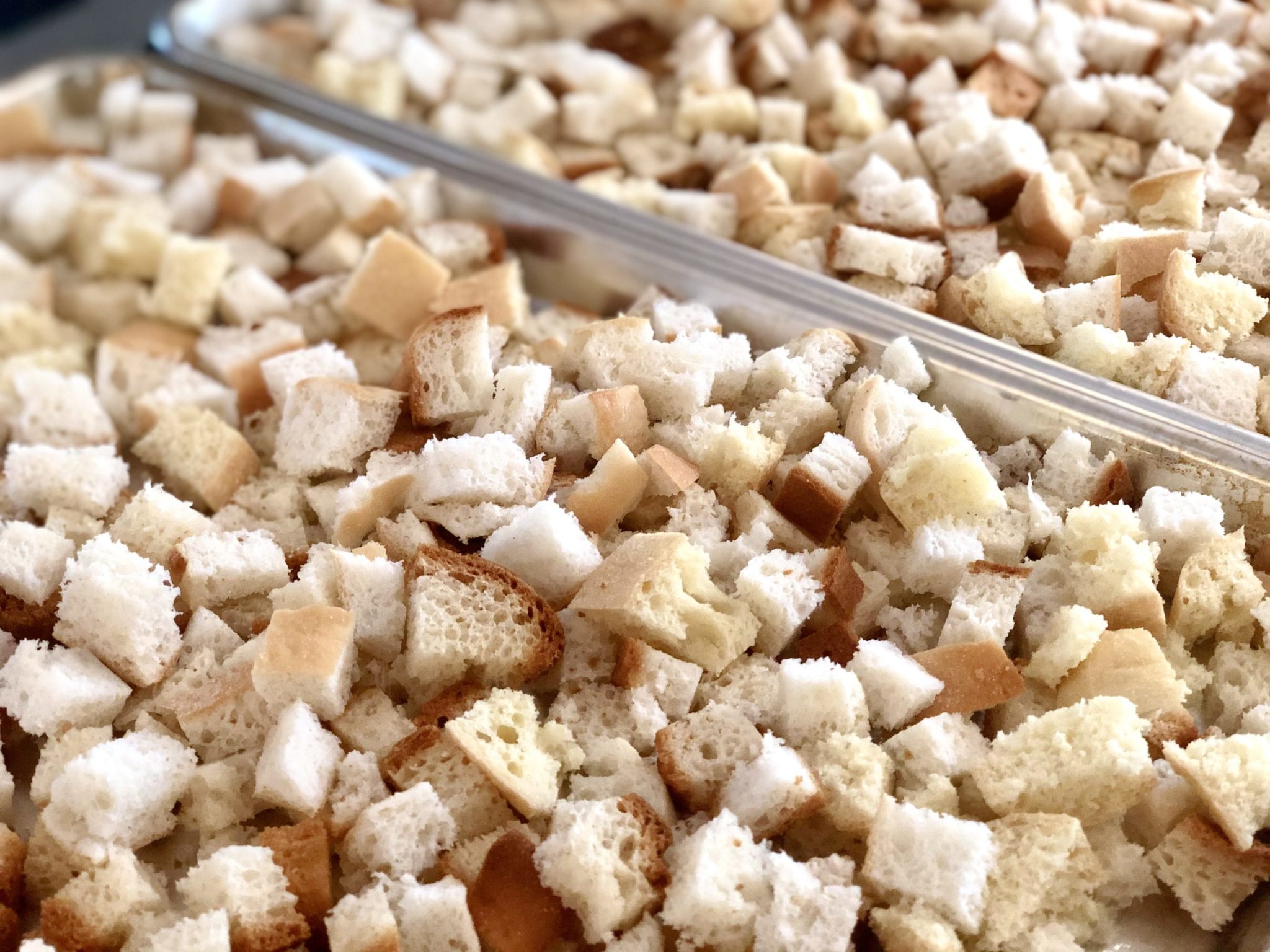 Drying the bread cubes in the oven is the first step, which may be done several days in advance. Note that white bread is key here, as multi-grain or whole wheat bread tends to become mushy. (See recipe notes for gluten-free recommendations.) 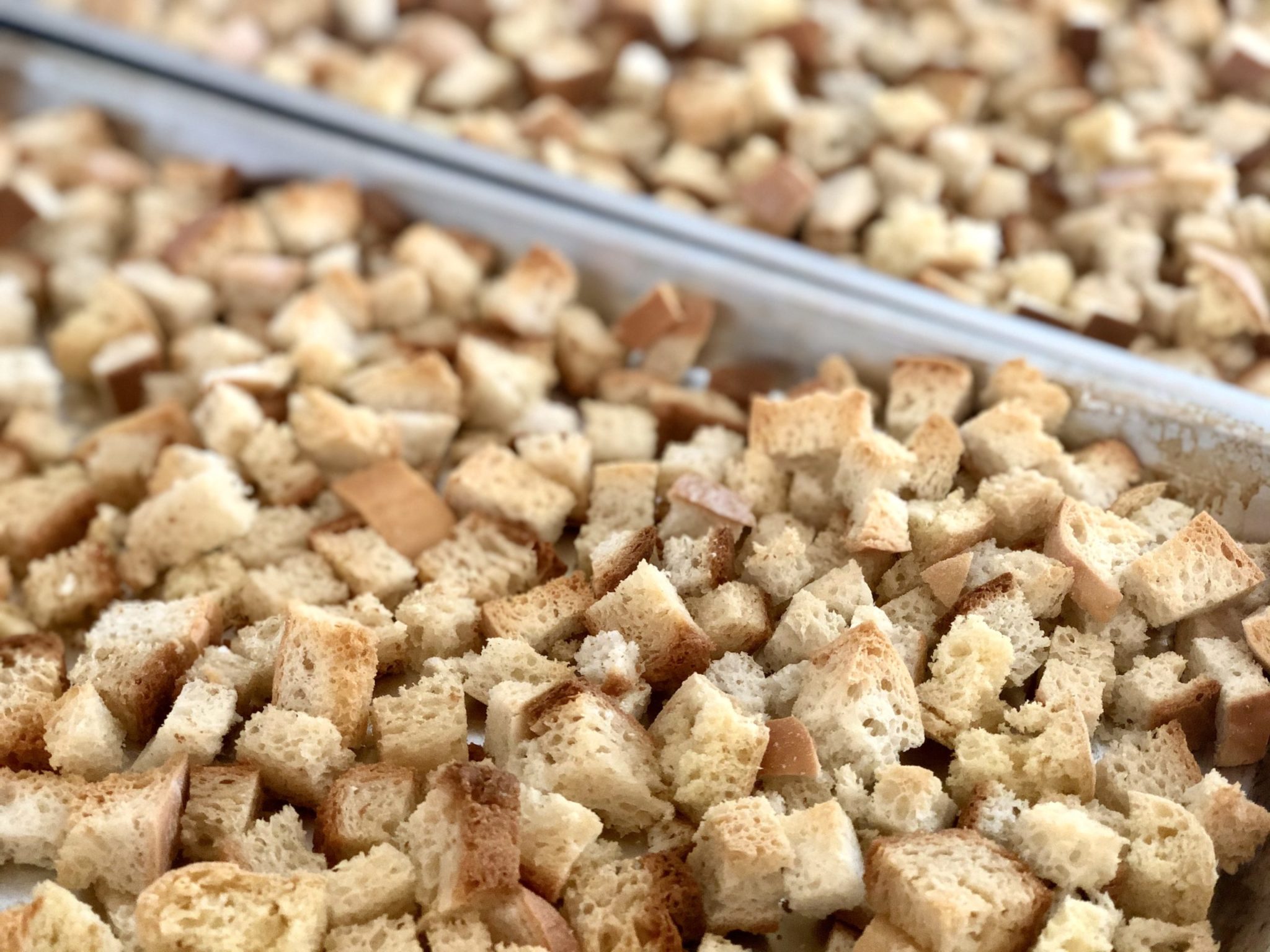 Once cooled, the bread cubes may be stored at room temperature in large resealable bags or an airtight container. 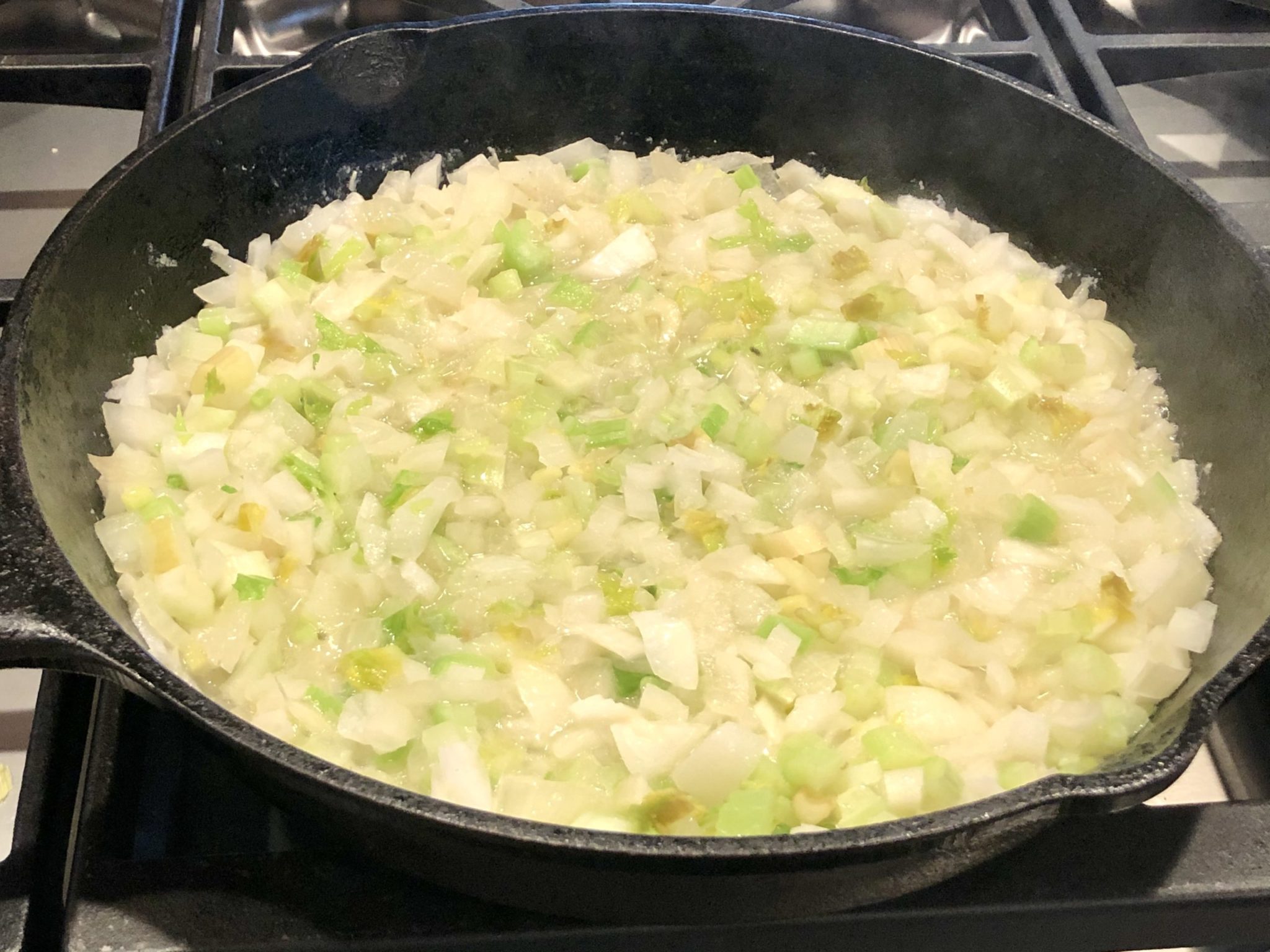 Melt the butter in a large non-stick skillet over medium-high heat. Add the onion and celery, and sauté until soft. In the final minute or so, the herbs and seasonings are added. 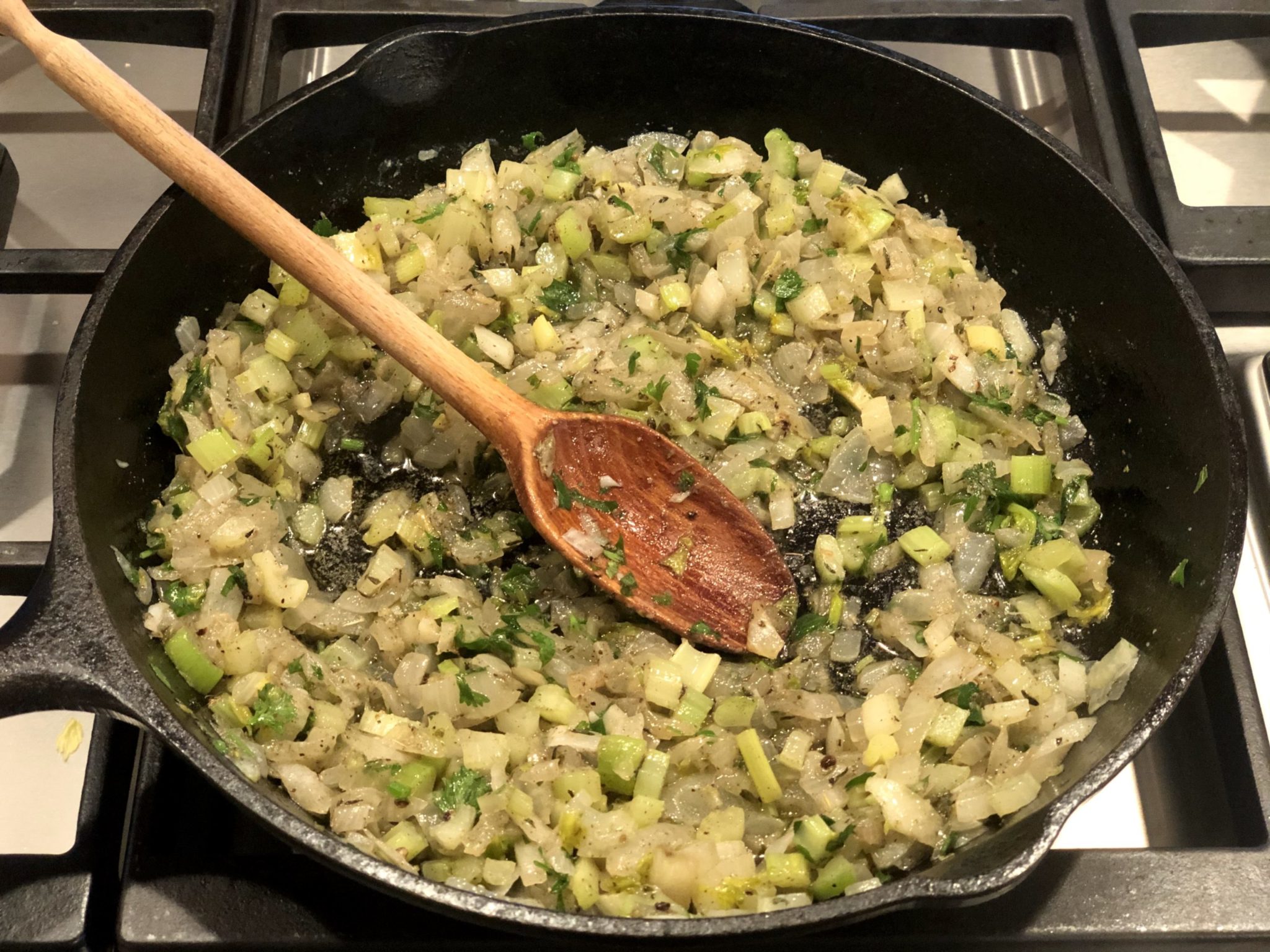 The vegetable mixture consists of celery, onion, and herbs and provides the perfect balance of classic flavor. It may be sautéed 1-2 days in advance and transferred to an airtight container. (Make sure you scrape out all the butter and juices.) 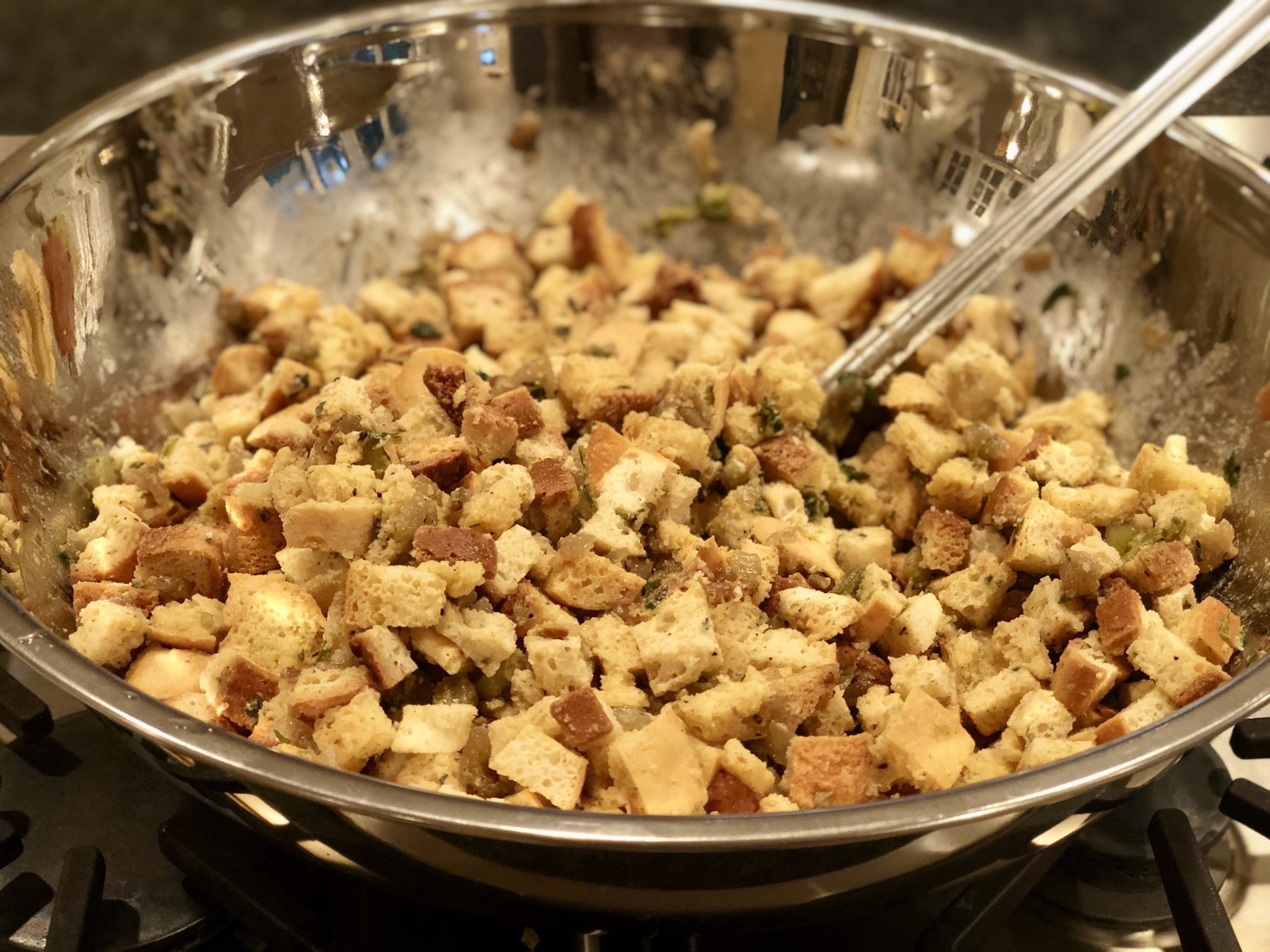 Next, the sautéed vegetables and egg/broth mixture are tossed with the bread. Then add just enough additional broth to lightly and evenly moisten the bread. Tip 1: if you prepped the veggies in advance, warm the mixture just enough to melt the butter and make it easier to incorporate into the bread cubes. Tip 2: if you don’t have a really big bowl, use the turkey roasting pan before you put the turkey in it. 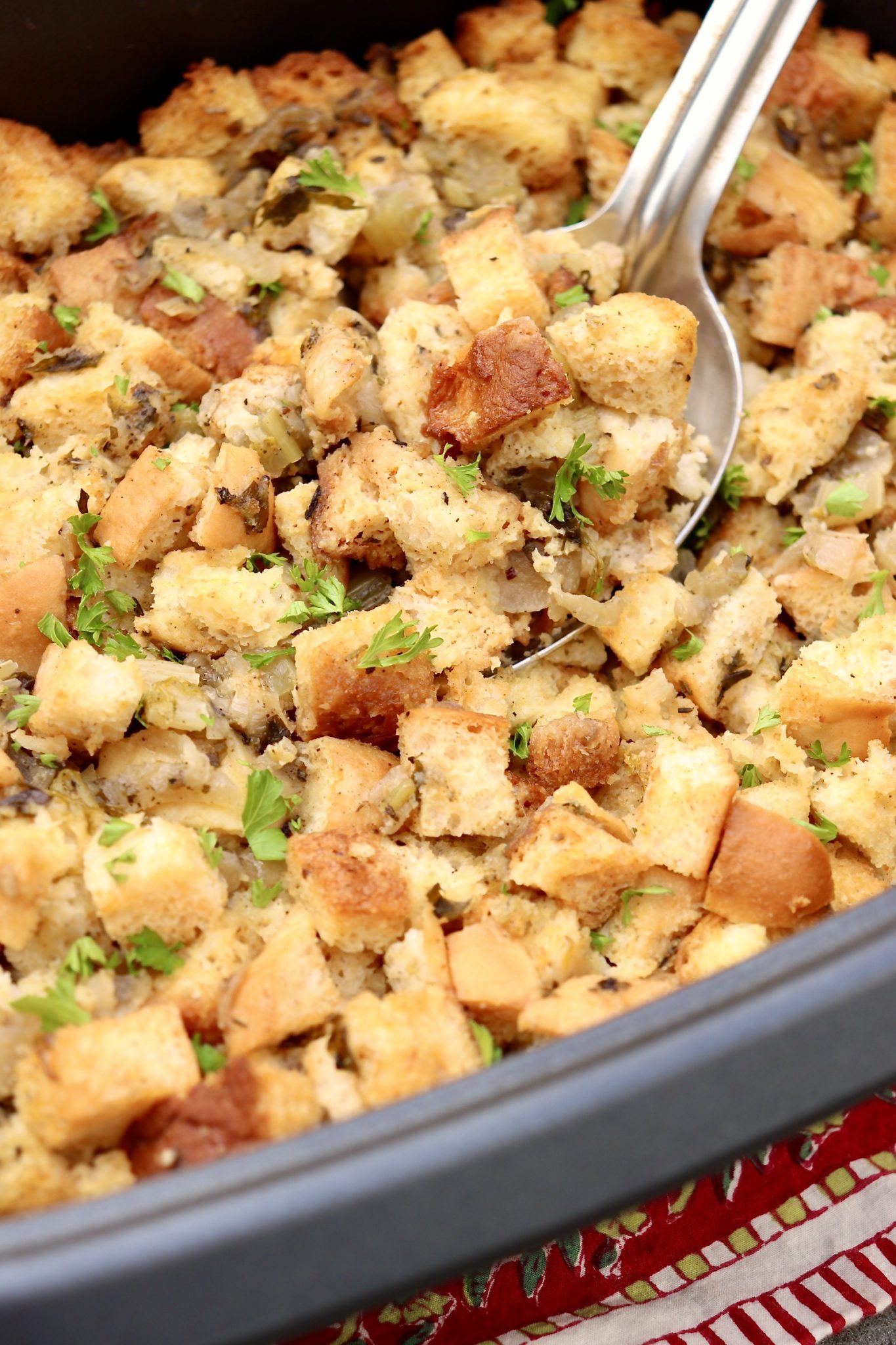 The uncooked stuffing is then transferred to a 6-quart slow cooker, which has been sprayed or greased. (This facilitates crisping the bread that touches the sides and bottom of the cooker.) When done, the stuffing may be served directly from the cooker or transferred to a serving dish. A light sprinkle of parsley adds visual appeal.

A note on gluten-free 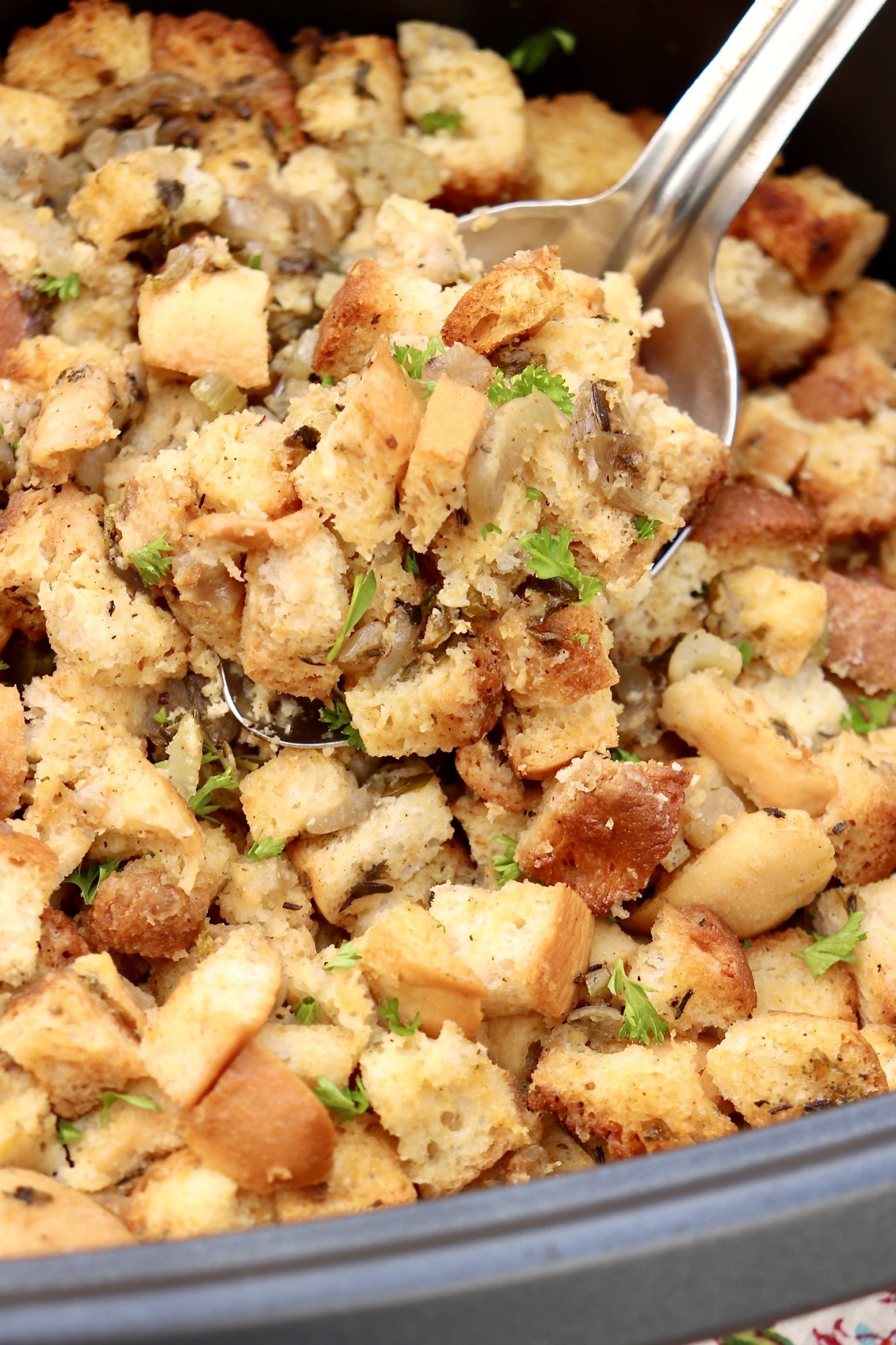 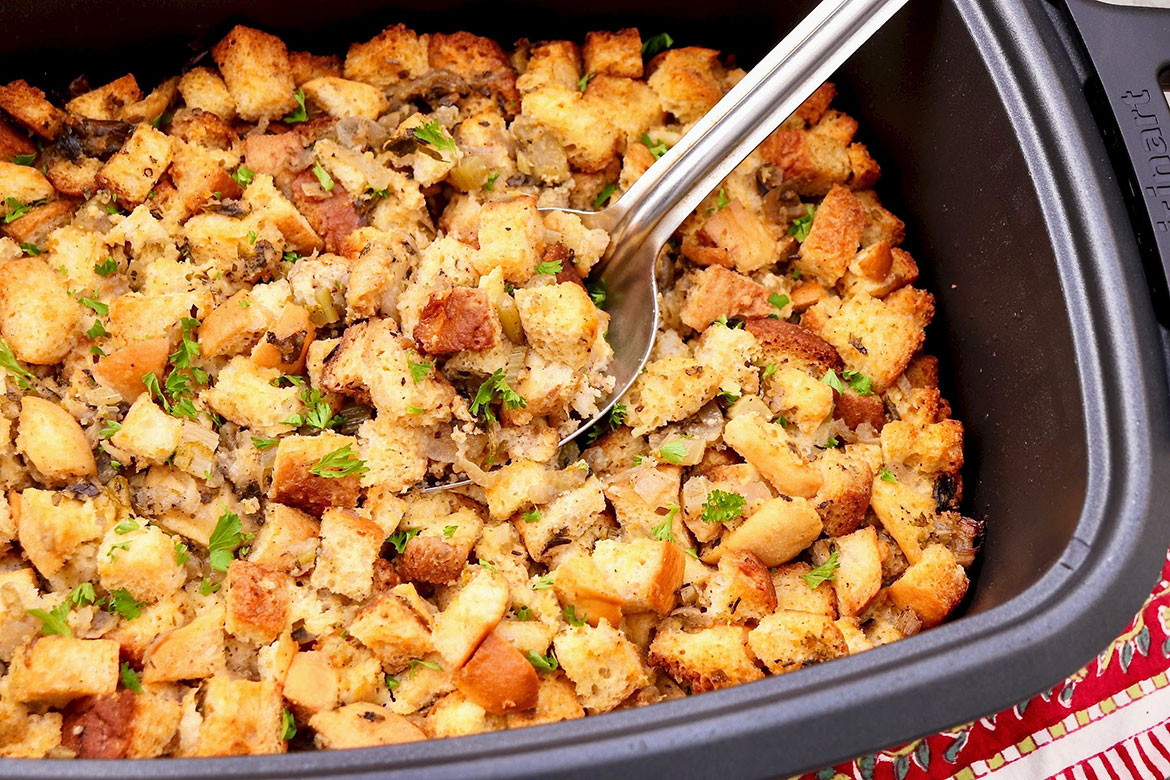 *It’s important to use a hearty white bread, like Pepperidge Farm (keep reading for foolproof GF suggestions). I often use primarily white sandwich bread – and I always include the crusts – and sometimes fill in with odds and ends of hot dog or other crusty rolls that I may have in my freezer. Some people swear by potato bread or corn bread, although I haven’t tested them with this recipe. Gluten-free bread works quite well, as long as you follow the all-white bread rule. Whole grain breads, whether GF or regular, tend to result in mushy stuffing. For those who’d like a specific brand to look for when buying gluten-free, I’ve had excellent results with Three Bakers and Udi’s.
**For the dried herbs in this recipe, you may use ground or leaves. When using ground, I use a fairly level teaspoon; when using leaves, I round the teaspoon. Alternatively, you may substitute a tablespoon or two of minced fresh herbs in place of the dried.
***For a dairy-free alternative, I recommend Earth Balance butter.

Pre-ahead options:
•The bread cubes may be dried in the oven several days in advance, cooled completely and stored in large resealable bags or an airtight container.
•The vegetable mixture may be sautéed 1-2 days in advance and transferred to an airtight container. (Be sure to include all the butter and juices.) Before stirring into the bread cubes, warm just enough to melt the butter and make it easier to incorporate.
•The eggs may be whisked and combined with the 2 cups of broth, covered and refrigerated up to 1 day in advance.
•The dried spices and seasoning may be mixed in a small bowl or jar up to a week or so in advance, and then covered and stored in a cool, dry place.

If you prefer a crunchy top layer: transfer the removable insert dish to the oven and broil for a couple of minutes, watching closely to avoid burning, until nicely toasted.

Conventional Oven Instructions: Preheat the oven to 350℉ and transfer the stuffing mixture to a casserole dish that has been coated with olive oil or nonstick spray. (You may use two smaller dishes if you don’t have one that’s big enough.) Cover with foil and bake for 40 to 50 minutes or until hot. For a crispy top layer, remove the foil during the last 15 minutes of baking or place under the broiler briefly before serving.

Optional stuffing add-ins:
•A few cloves of minced garlic may be added in the last minute or so of sautéing the vegetables.
•Other complementary vegetable choices include leeks, mushrooms and carrots; as with the other vegetables, sauté before mixing into the bread cubes.
•Cooked and crumbled sausage is a lovely addition. For this recipe, use up to 2 pounds (weight before cooking).
•Chestnuts or other nuts such as walnuts, pecans or almonds may be added. Plan on 2 to 3 cups for this size recipe.
•Dried fruit could also be added for those who enjoy. A cup or so of chopped dried apricots, cherries or cranberries is a good amount.
•Some also enjoy oysters, minced giblets or fresh diced apples in their stuffing. Feel free to use this recipe as a framework for what your family enjoys. 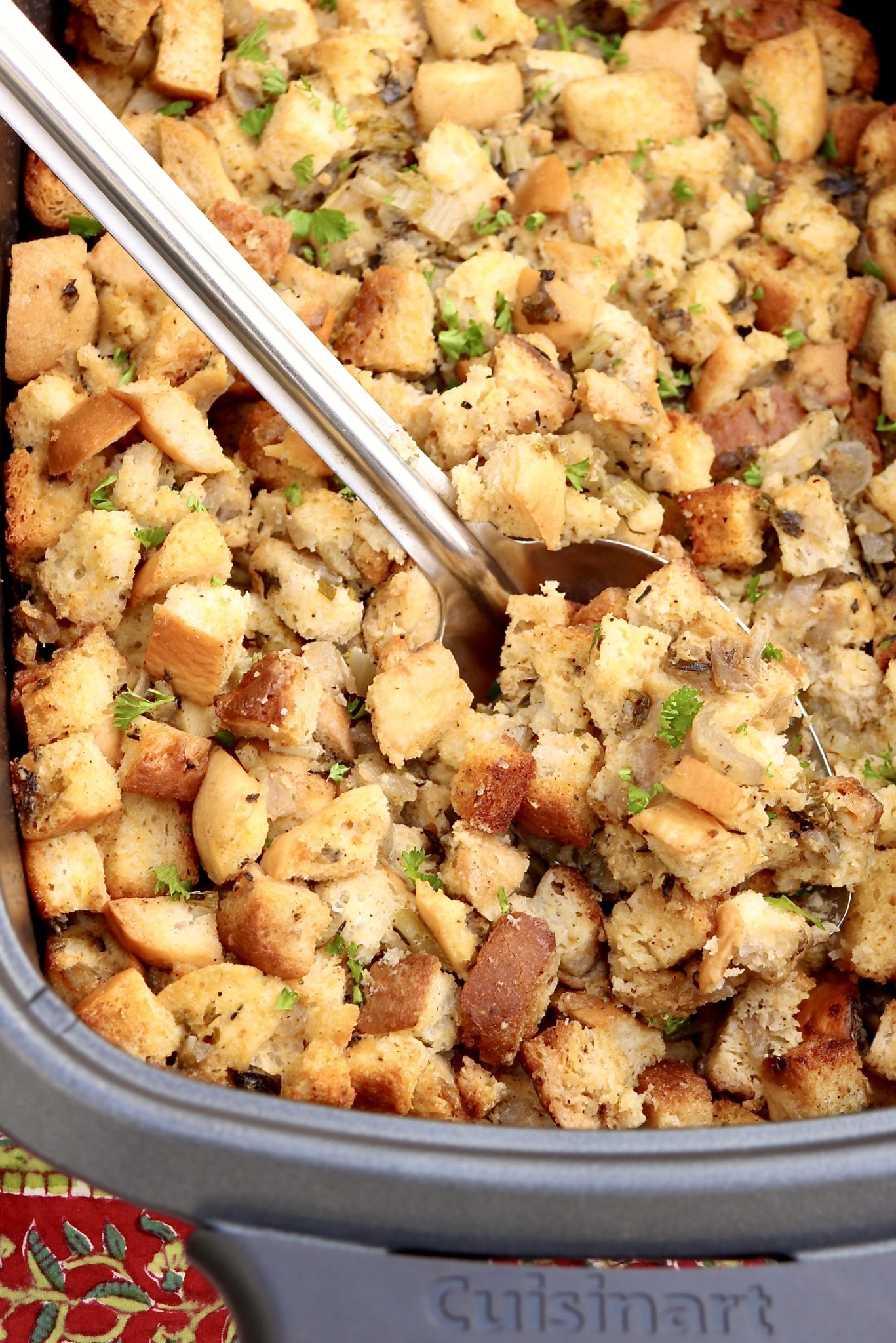