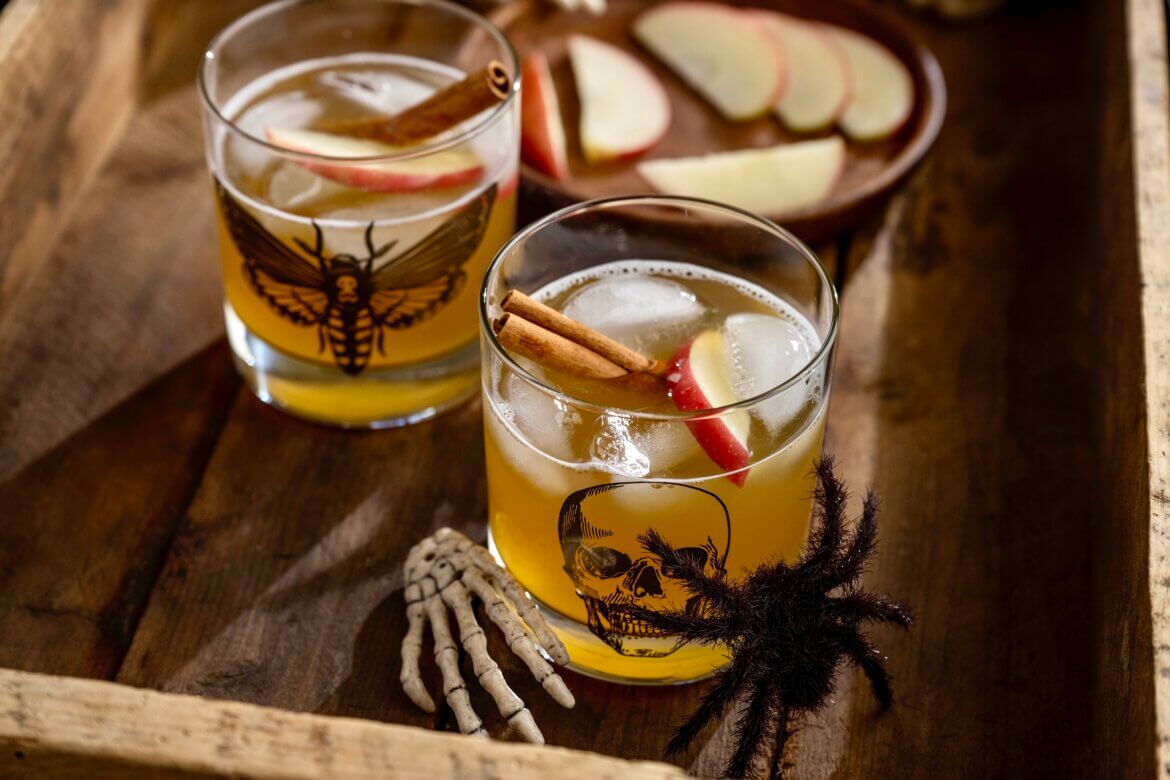 The name may be catchy but the flavor really delivers in this crowd-pleasing Halloween cocktail that you’ll want to enjoy throughout the fall and winter. Easy to mix one cocktail or a pitcher!

It seems the older I get, the more I enjoy playing with my food! Holidays, of course, provide an abundance of opportunities.

Halloween is an excellent example: Spooky Spaghetti Stuffed Peppers, Spider Dogs, Halloween Jack 0’Lanterns, Candy Bag Brownies, and Donut Monsters are as fun for adults as they are for kids.  They also offer a figurative ray of sunshine on a cloudy day–and who can’t use some of this?

So when I recently attended a holiday party where the signature drink was Spider Cider, I perked up. The cocktail with the catchy name was an easy-to-make combination of three ingredients, with two garnishes providing added value.

The guests raved. The beverage was a crowd-pleaser for sure, and my friend and party host kindly shared her recipe.

In the time since the party, I’ve made and shared the simple recipe several times, always to great reviews. Friends have been mixing up a single glass for a 5:00 p.m. treat, and several are serving as a pitcher drink for upcoming holiday celebrations.

My aunt is bringing the components as a hostess gift next weekend with a few Halloween surprises included in the bag. 🕷 Such fun!

What is in Spider Cider? 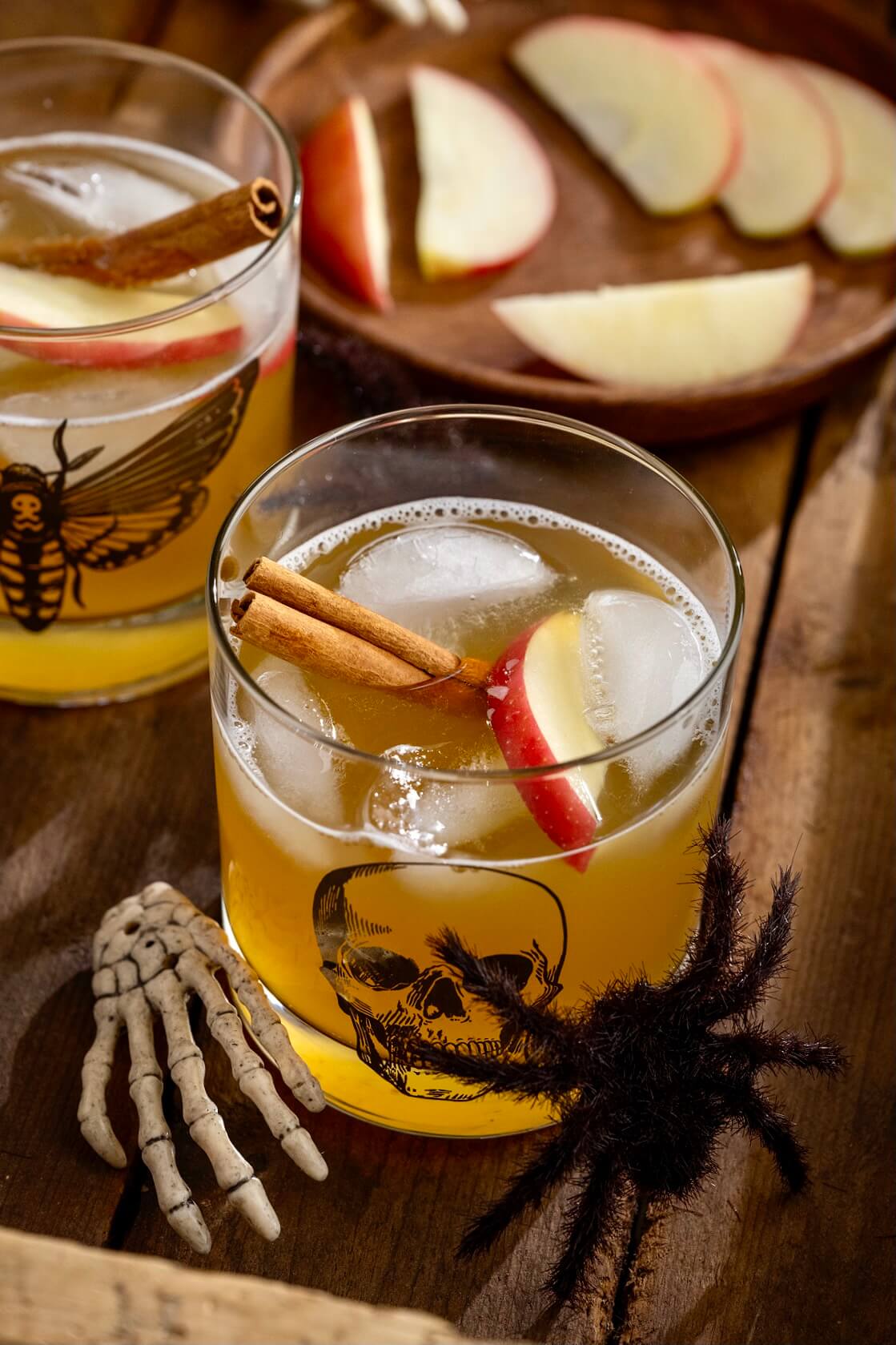 The poetic name is clearly tied to Halloween, but the flavor of this cocktail is absolutely one to enjoy all fall and winter long. Bourbon is bold yet smooth and offers notes of vanilla, oak and caramel. The spiced notes of apple, cinnamon, and ginger in the remaining ingredients make for a cocktail that warms the soul, even when served on the rocks.

The host mentioned that she is planning to serve this drink warm for her outdoor Thanksgiving celebration this year. I think this would be a delightful option for those who enjoy mulled wine, mulled cider, and similar beverages. 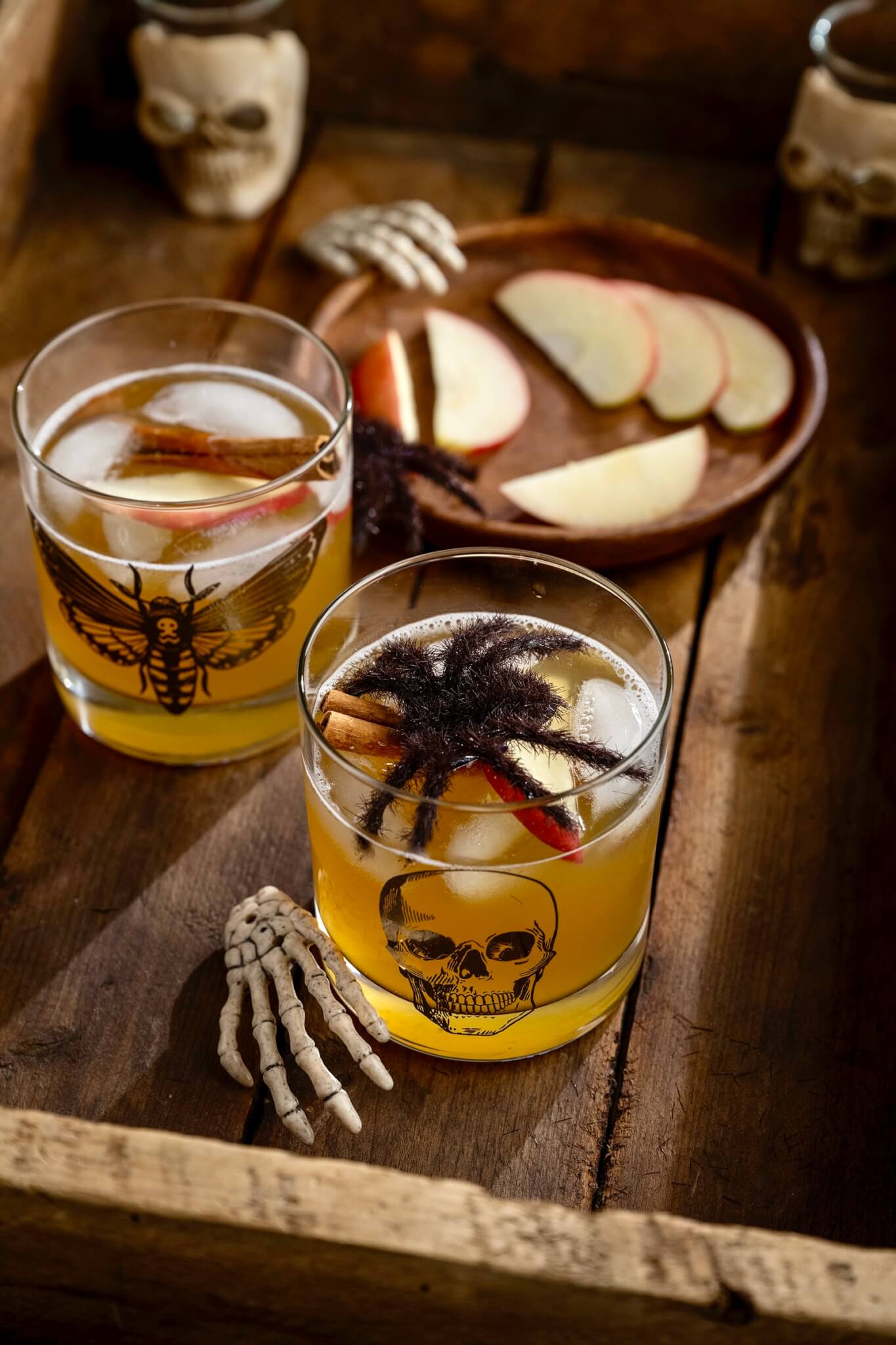 It might seem scary, but it’s really just delicious! 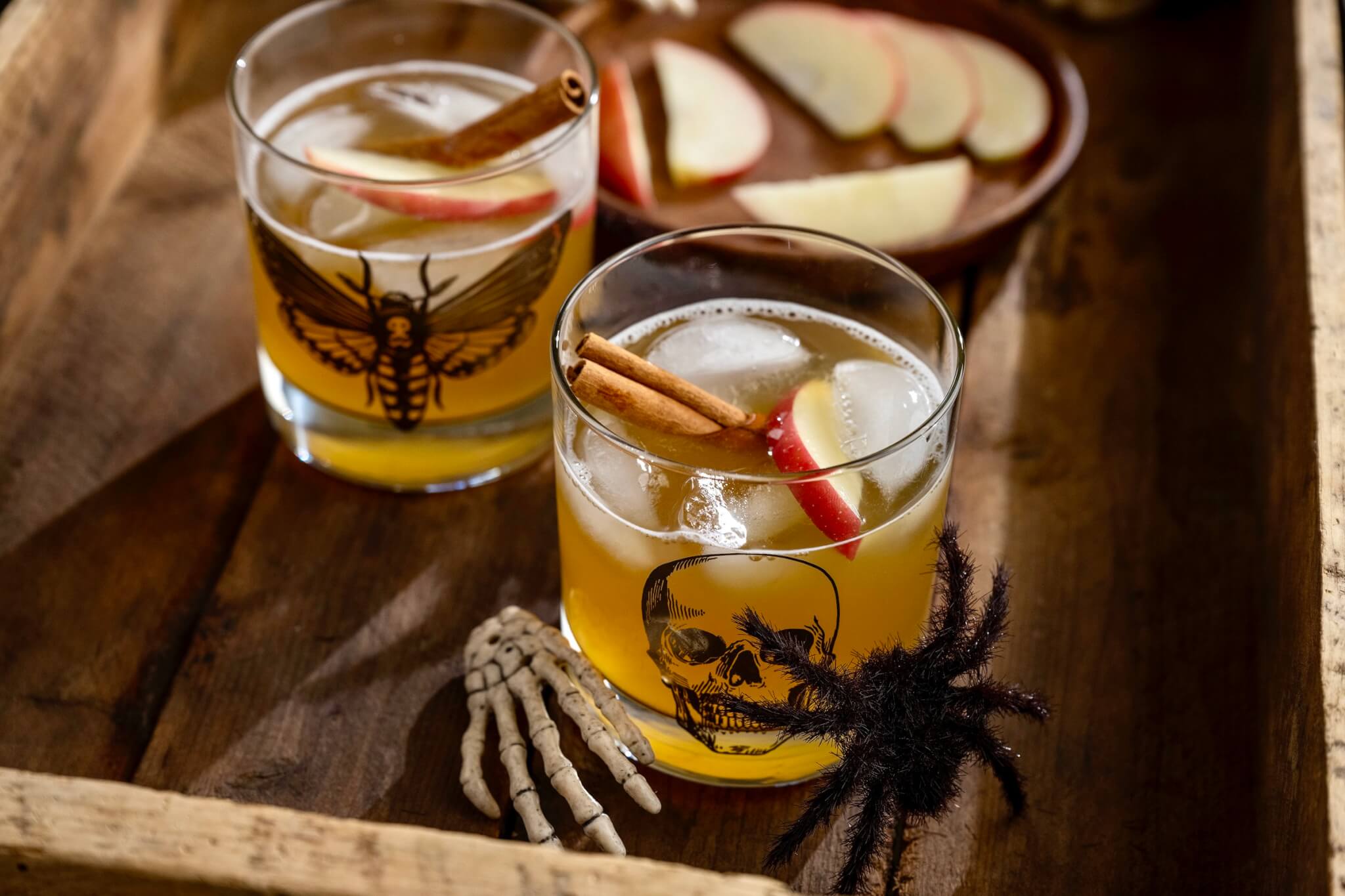 Spider Cider
Yield: 3-4 servings (recipe easy to scale up or down as needed)
Three main ingredients and two flavorful garnishes come together with ease in this party favorite cocktail. The festive name is perfect for Halloween, but you may rename it after the holiday. You'll want to sip this tasty brew throughout the fall and winter!
Print
Ingredients
Instructions

Combine the apple cider, ginger beer, and bourbon and pour into ice-filled glasses. Garnish with one or two thin apple slices and the cinnamon.

Fun tip: If you serve the drink in a short glass, a cinnamon stick may be used as a straw. It’s fun and offers a lovely hint of flavor.

For a mocktail: Combine equal parts cider and ginger beer and garnish with the apple and cinnamon. 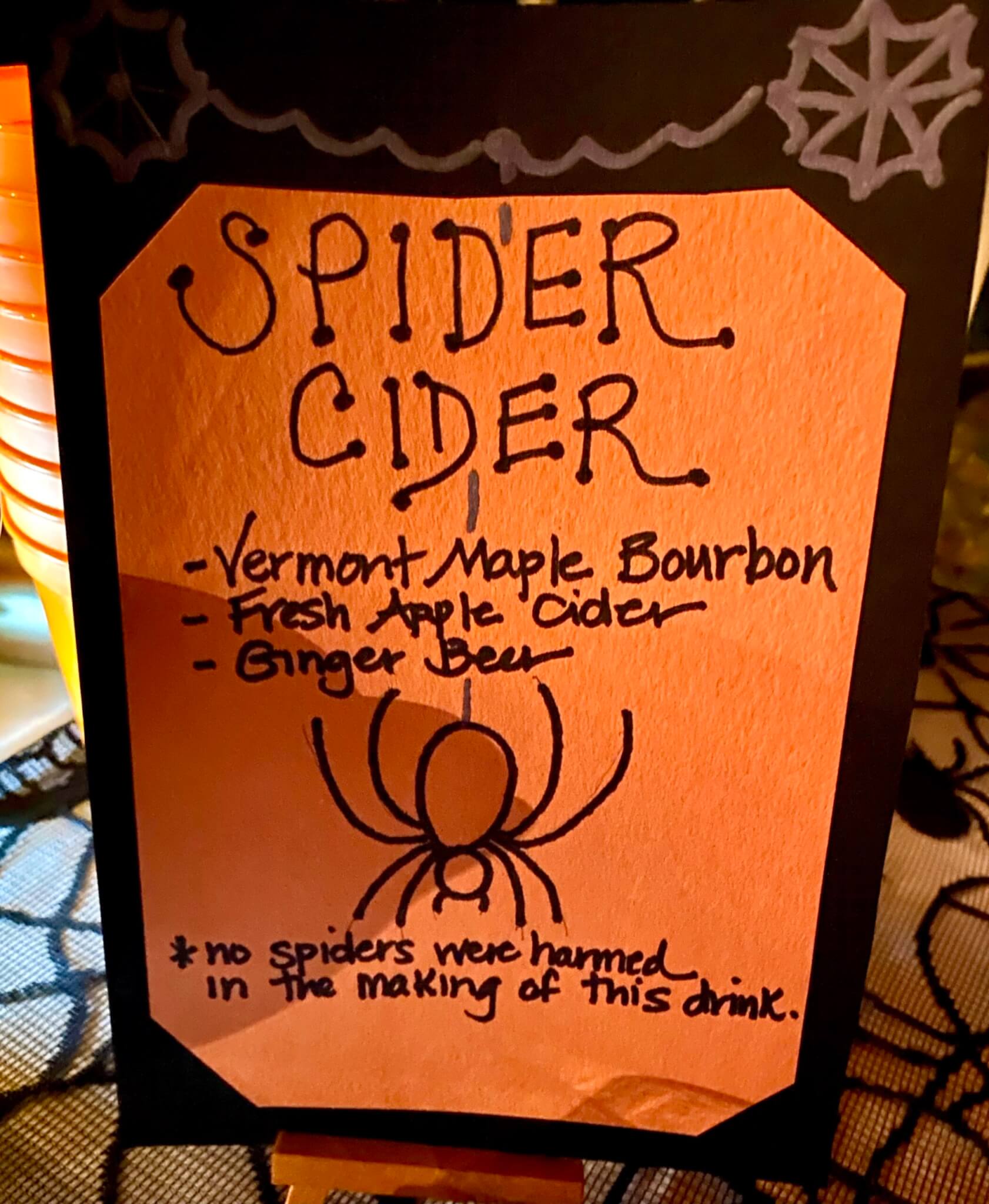 Spider Cider was the signature drink at a fall party I attended recently. The hosts used maple bourbon, but your favorite bourbon, maple-infused or not, works beautifully in this drink. (Note the humorous disclaimer at the bottom!)