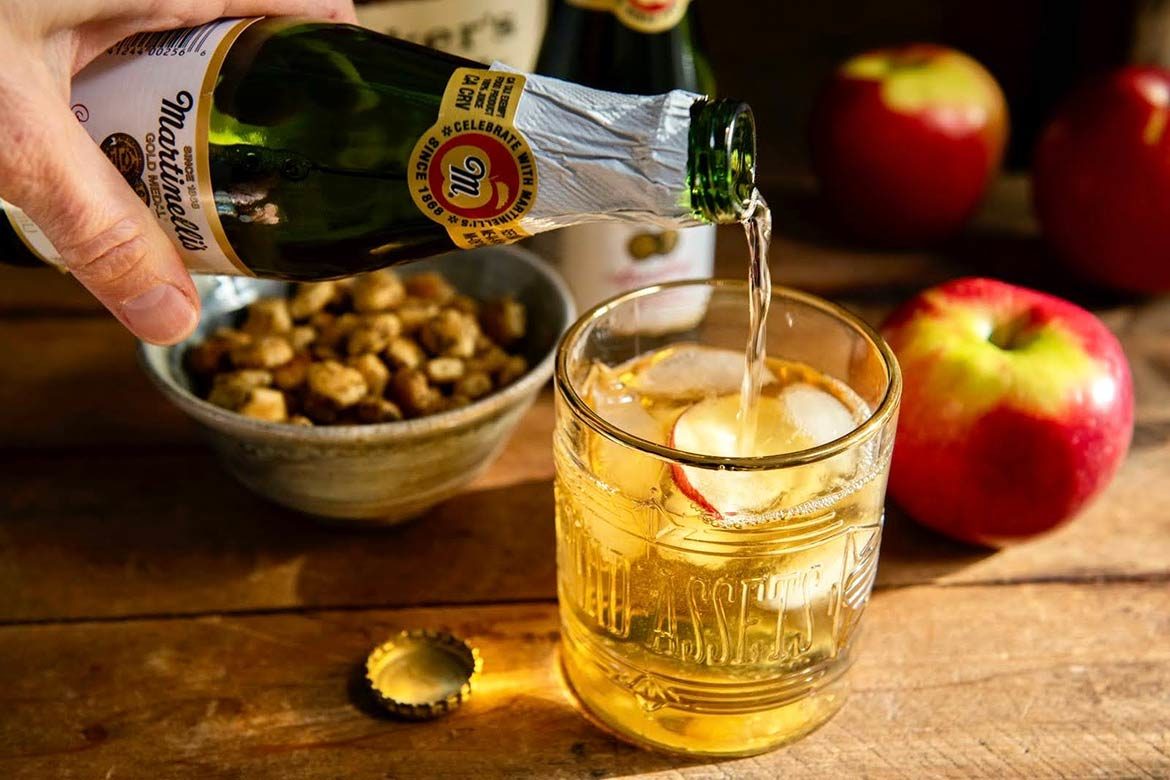 Warm notes of bourbon complement the sweetness of apples in this lightly effervescent cocktail that takes a mere minute to make.  Prefer a mocktail? Just skip the bourbon!

Over the years, I’ve tended towards a simple glass of wine over a mixed drink. But an occasional cocktail can be a fun mealtime addition, and lately I’ve enjoyed experimenting with a variety of liquors that I historically considered too harsh for my tastes.

Turns out, when balanced with another ingredient or two, those assertive flavors can be tempered into something smooth and delightfully sippable.

As I’ve created new drinks and posted pictures on Instagram, I’ve shared the recipes with friends and readers who have expressed interest, and I’ve welcomed their feedback. Many have asked for more cocktail recipes in the year ahead. Some even detailed the combinations they enjoy mixing up when 5:00 rolls around.

So as 2020 winds down and we look forward to good things in the New Year, I will be raising my glass to you. For those who prefer to keep it non-alcoholic, you may simply skip the bourbon in this drink and still have something deliciously festive.

But first, have you ever wondered what differentiates Bourbon, Scotch, and whiskey (or whisky?). I used to get confused, so I’d ask my dad, who has long appreciated a good Scotch, for clarification.

If you, too, could use a little refresher, a brief rundown follows. I’ve also answered some common questions and included a fun gift idea! 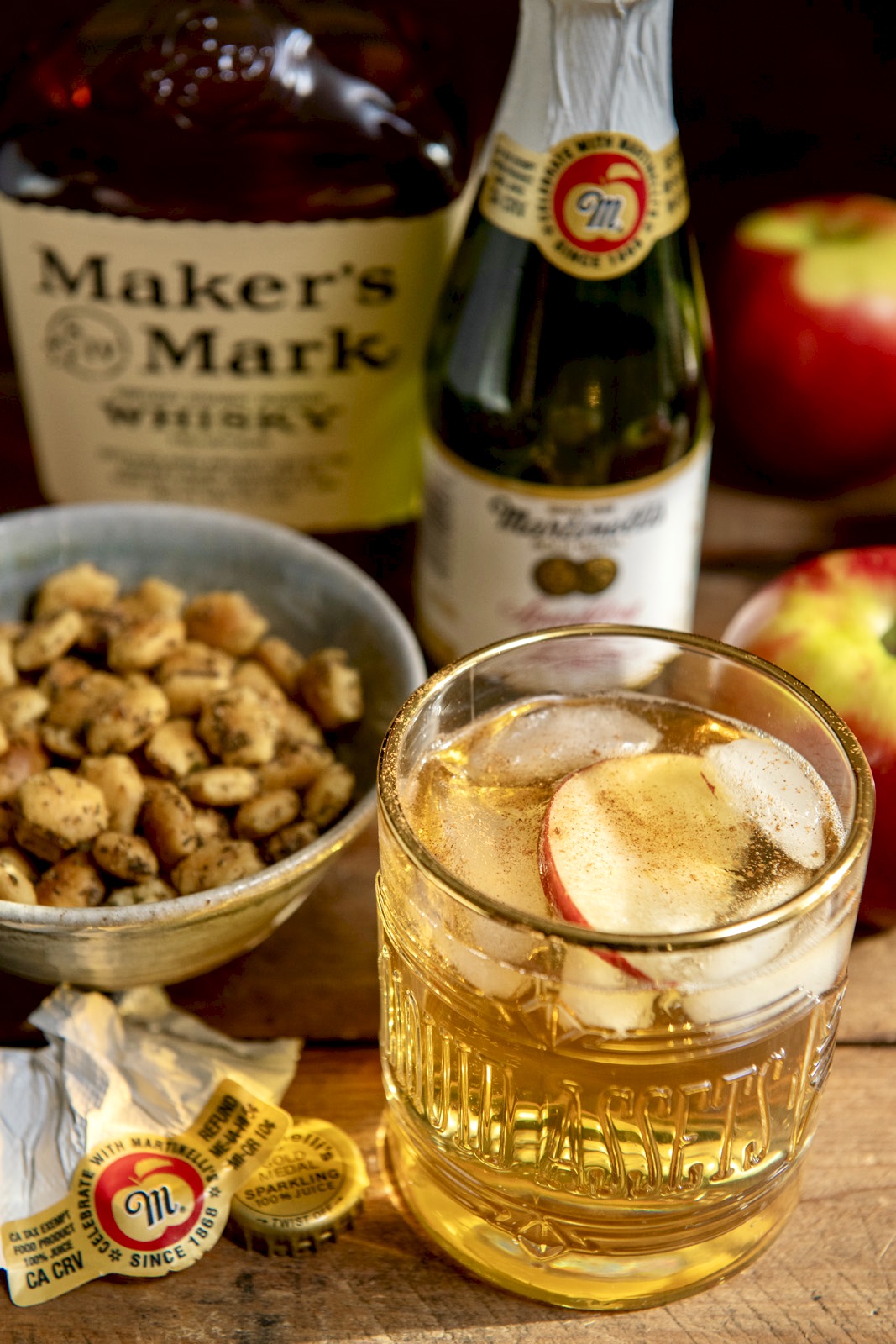 What is the difference between Bourbon, Scotch, and Whiskey?

The easiest way to understand the difference is this: Whiskey is the main category into which bourbon and scotch are grouped. All bourbons and scotches are whiskey, but not all whiskey is bourbon or scotch.

Whiskey is a spirit distilled from grains (wheat, corn, barley, and/or rye) and aged in barrels. Whiskey is made around the world, and some of the varietals include Scotch whisky, Irish whiskey, and bourbon.

Bourbon must be made in the United States, and although bourbon may be made anywhere in the USA to claim the name, it is most commonly associated with the American South and Kentucky in particular. There are other requirements, such as bourbon must be made from a fermented mash of at least 51% corn. It must also be aged in new, charred, white oak barrels for at least two years, and may never contain additives, like color or flavorings.

Similarly, Scotch whisky and Irish whisky must be made in Scotland or Ireland, respectively, in a manner specified by laws in those nations.

Whiskey or whisky? Have you noticed the word spelled with and without an “e” and wondered which way is correct? It turns out, they both are. Whiskey with an “e” refers to whiskeys produced in the United States (and this would include bourbon, as we now know!), whereas the alternate spelling without the added letter is used for varietals coming from other countries like Scotland, Ireland, and even Canada and Japan.

For those who would like to learn more about the origins, the ingredients, the rules, and the manufacturing processes that differentiate these liquors, this article provides a comprehensive overview. My dad is rather good at answering these questions, too, and I will happily forward your questions. 😉

Are these liquors gluten-free?

Which bourbon should I use? 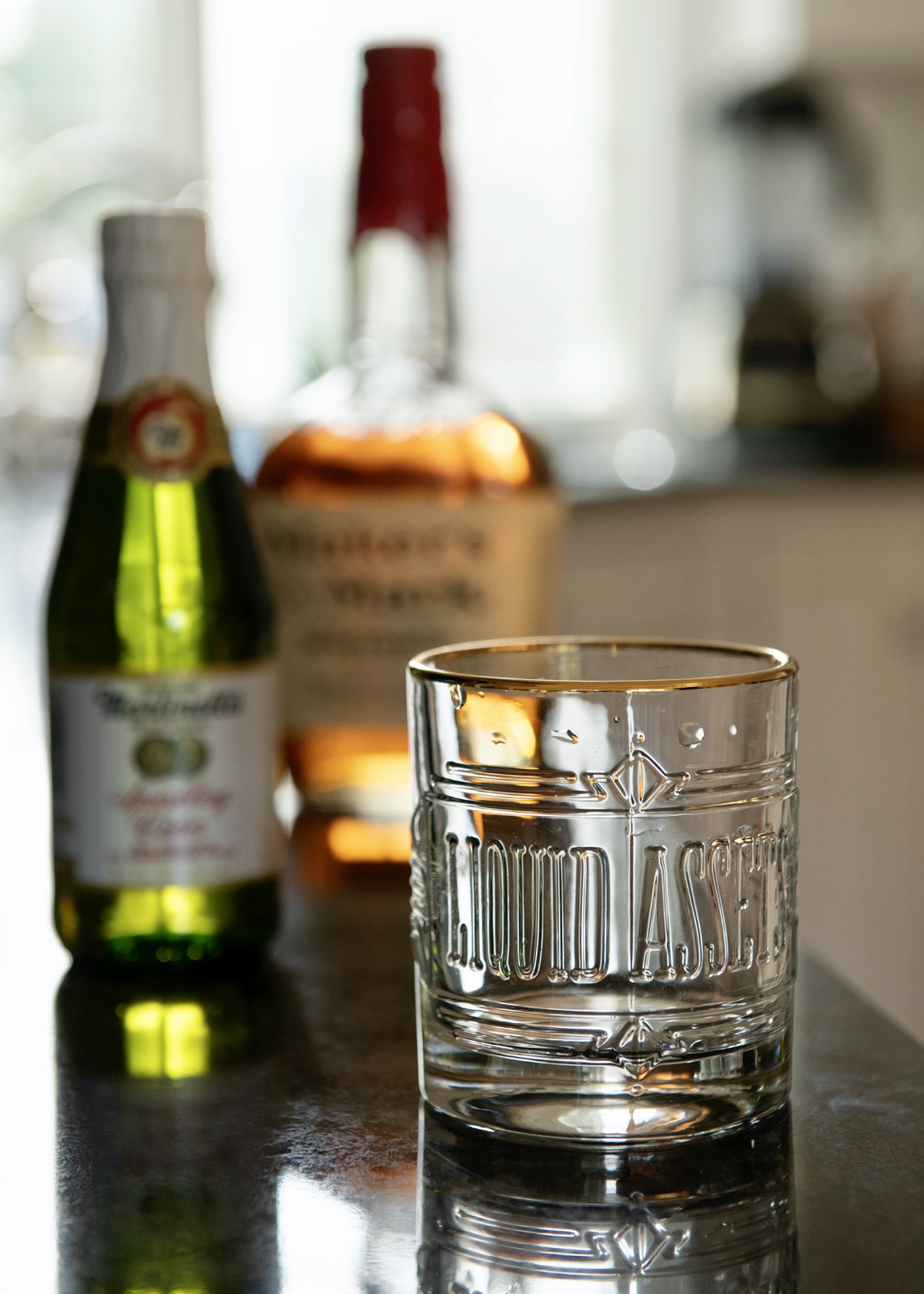 For a friend’s recent milestone birthday, I “toasted” her with two fun glasses, the ingredients to make this cocktail, and the instructions written on a recipe card. You could do this with any number of cocktails and mocktails, from a gourmet Bloody Mary mix to the key ingredients in an Aperol Spritz…even coffee mugs, coffee, and a bottle of Bailey’s Irish Cream, which is easy to make at home and serves as a thoughtful gift on its own. Even a single special glass can be fun. Everything seems to taste a little better out of a special glass! 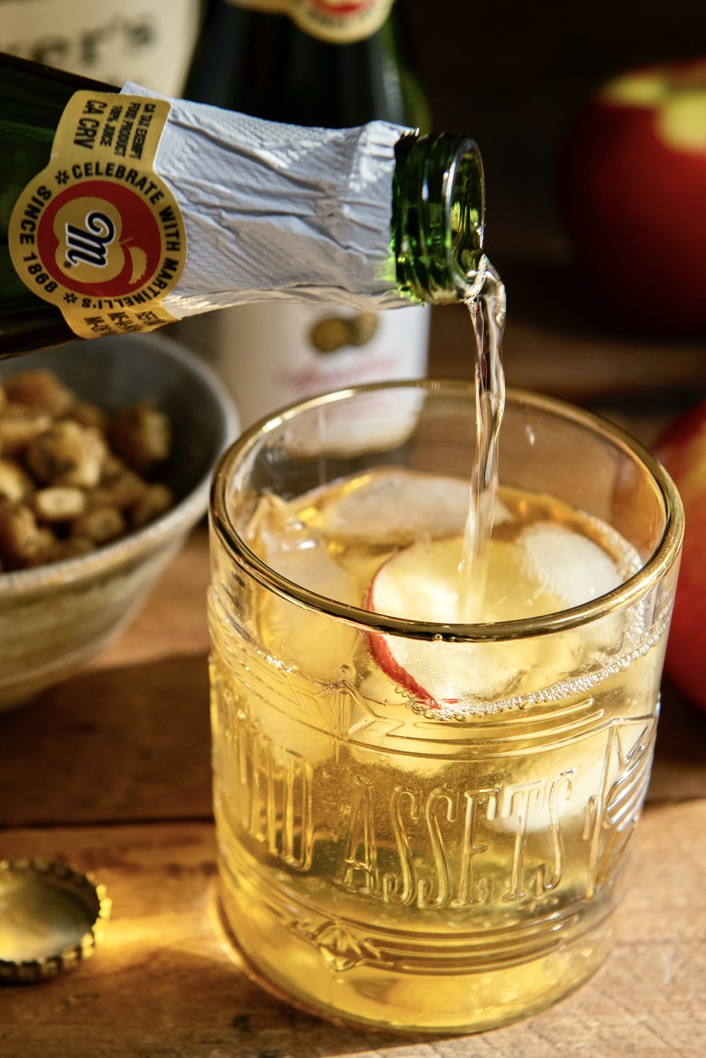 What’s in a name?

A “Bourbon Smash” includes bourbon, lemon, simple syrup, and mint. In this drink, the sparkling apple cider essentially replaces the lemon and simple syrup, and cinnamon is used instead of mint. The apple variation is quicker to make, too. I debated over names (Sparkling Bourbon was a contender), but ultimately liked the ring of Apple Cider Smash. 🍎 🥃 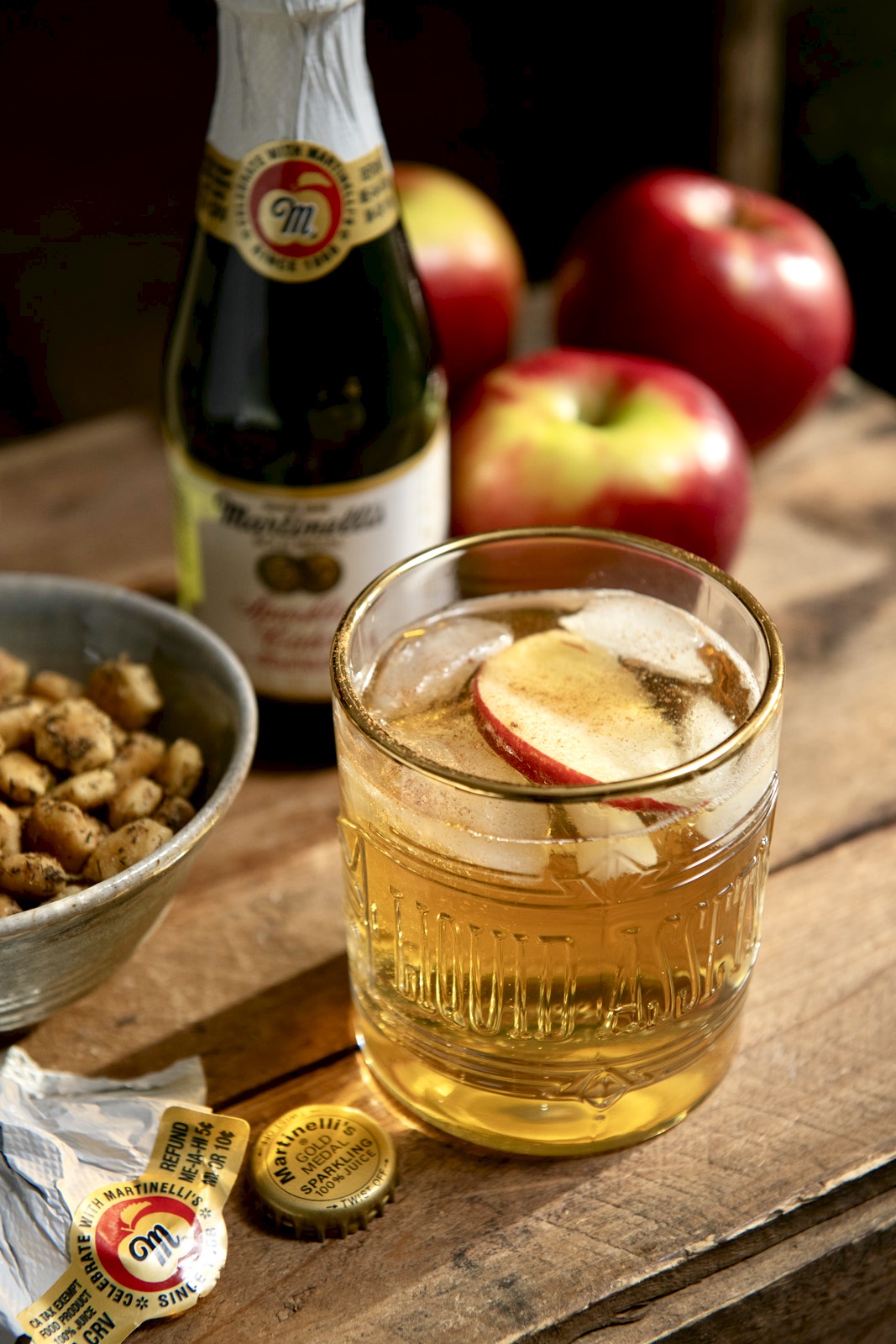 The warm spice of cinnamon adds an extra layer of flavor to this drink, and a light dusting is all you need. The apple slices tastes extra special after soaking in the bourbon and sparkling cider, so I often add two! 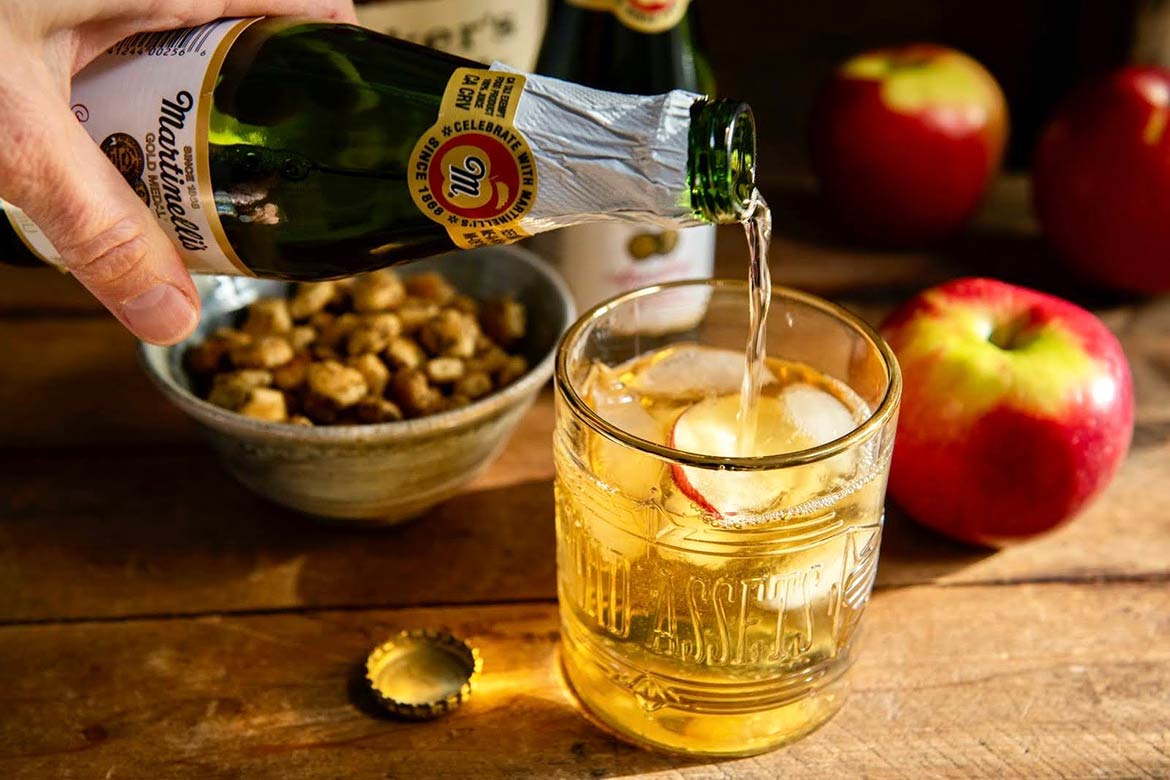 Apple Bourbon Smash
Yield: 1 drink
The warm notes of Bourbon complement the sweetness of apples in this lightly effervescent cocktail that can be made in a minute!  Prefer a mocktail? Just skip the Bourbon!
Print
Ingredients
Instructions

Pour the Bourbon and sparkling apple cider into and ice-filled glass. Add the apple slice and a sprinkle of cinnamon.

The warm notes of cinnamon really complement this drink. The apple slice tastes extra special after steeping in the cocktail over time, so feel free to add two.

*Feel free to use your favorite bourbon. For those who’d like a recommendation, Jim Beam, Maker’s Mark, and Wild Turkey are all good choices. There are also an increasing number of small batch and regional whiskeys that you may enjoy trying in this cocktail.

Prefer a non-alcoholic alternative? Simply pour a glass of sparkling cider over ice and garnish with the apple and cinnamon. You can even serve this in a champagne flute to make it fancy.

A few more things:
•I usually buy Martinelli’s sparkling apple cider although other good brands are available. Leftovers will keep for several days. If you didn’t save the cap, simply cover the top with a small piece of plastic wrap.
•Splits (smaller bottles, often sold in a 4-pack) of sparkling apple cider are available at some stores (I’ve found them at Target) and are especially convenient if you’d like to make one of two drinks.
•Finally, I recommend plain sparkling apple cider, as I have not tried the flavored varieties like apple-cranberry and apple-grape. That said, if you try and like, please report back!