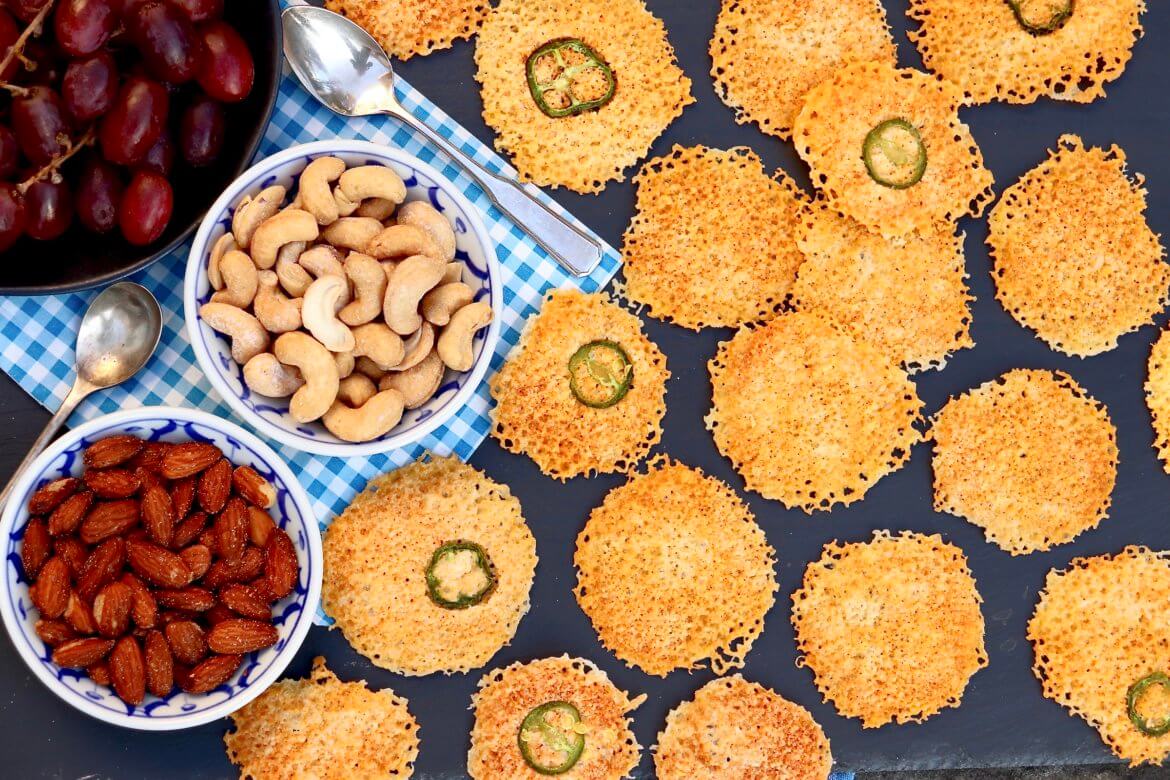 Low-carb cheese crisps require only one ingredient (jalapeño slices are optional) and cook in 2 short minutes－and believe it or not, the microwave produces better results than the oven. Perfect with a glass of wine or as a flavorful alternative to a crouton.

If I said you could make a light and flavorful cheese crisp with a variety of cheeses that you may already have in your refrigerator, you may not be particularly surprised.

But what if I mentioned that I’ve had greater success when skipping the traditional oven preparation in favor of the microwave?

My mother-in-law, Judy, deserves credit for this easy method, which quickly transforms little piles of shredded cheese into crisp wafers. The low-carb rounds make a delightful pre-dinner nibble and a flavorful alternative to a crouton.

Interestingly enough, cheese crisps that are baked in the oven are more likely to burn or cook unevenly. And believe it or not, cheese really will become crisp in the microwave!

Judy taught me the technique using pre-shredded cheddar cheese, which she strictly adheres to for its appealing flavor and consistent results. Never one to pass up a good kitchen experiment, however, I eventually put a variety of cheeses to the test. 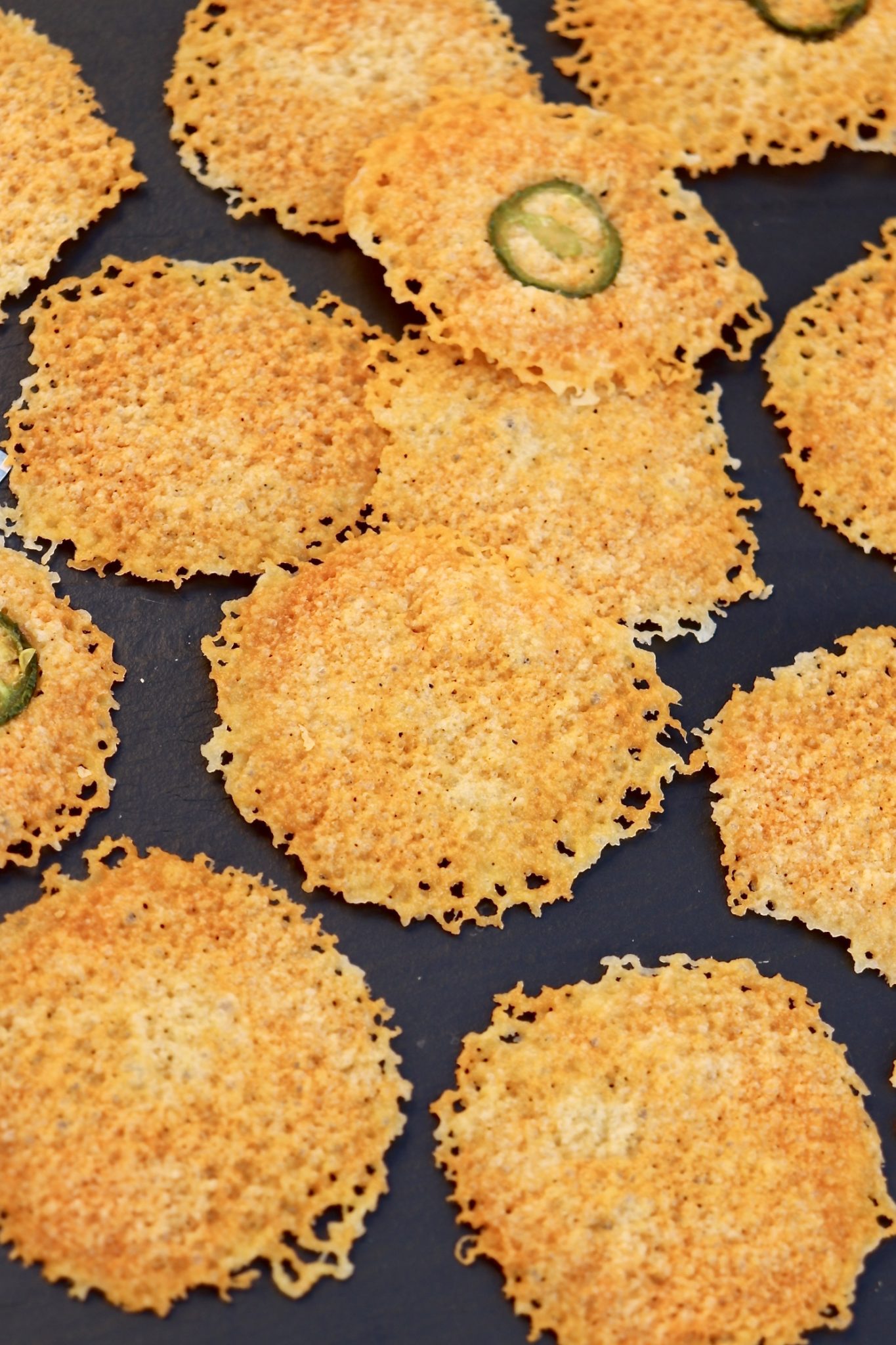 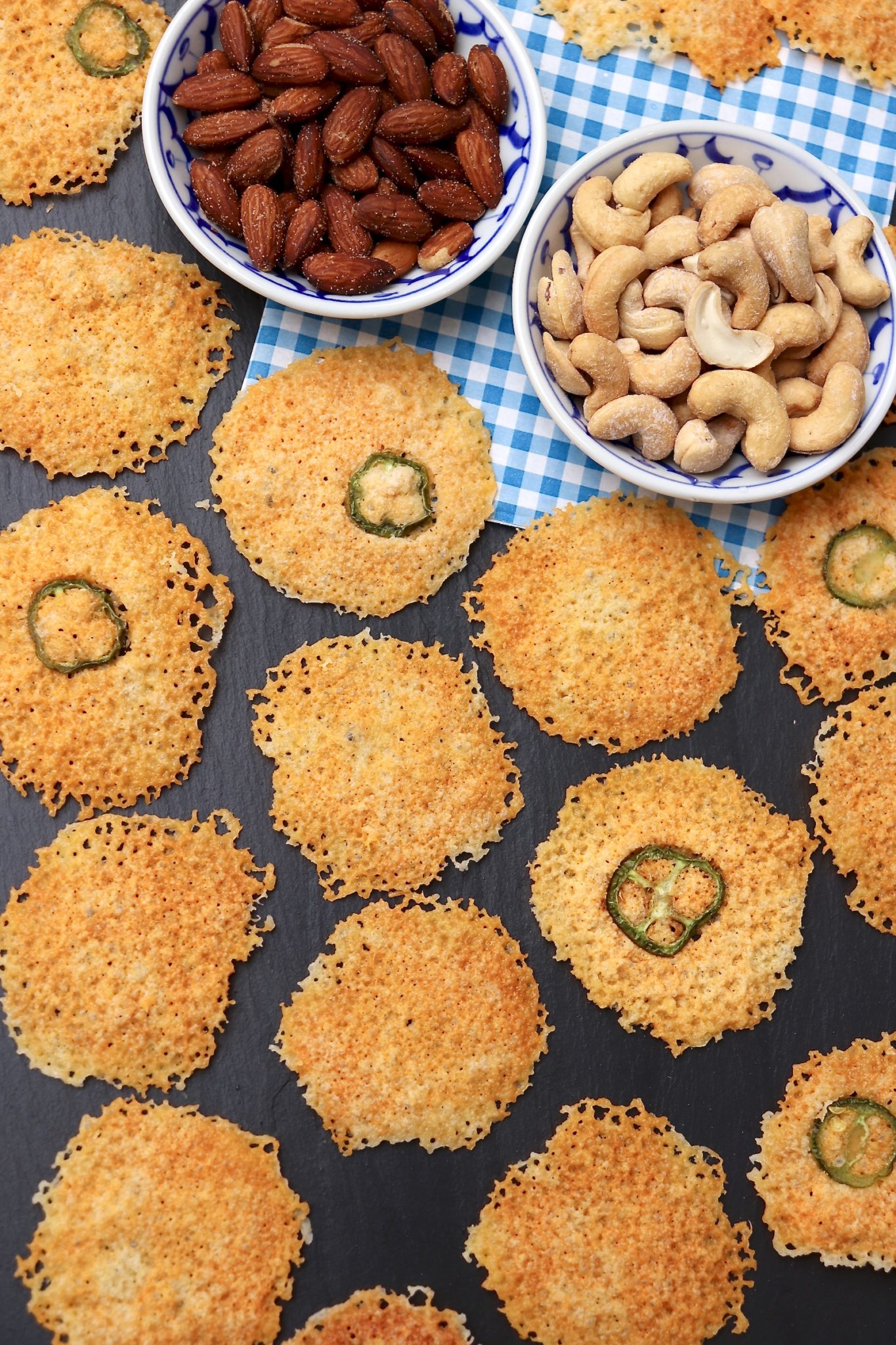 Several years ago, I was working on a project for Sargento Cheese and happened to be in need of a last-minute hors d’oeurve. A quick scan of the fridge revealed a sheer excess of cheese.

I had cheese sticks, multiple varieties of shredded cheese and cheese slices, both regular and thin. Wouldn’t it be fun to see how they all fared when zapped in the microwave?

I was pretty sure that microwaving a soft cheese stick would result in a goopy mess, and I had my doubts about the thin slices. Though there was a minor variation in timing that needed to be ironed out, I was surprised to find that every variety ultimately produced a worthy crisp.

Wondering if the “extra” ingredients present in some cheeses would alter the outcome, I made a batch using a more processed brand. That outcome was not as good.

Armed with this discovery, I later made cheese crisps with a variety of block cheeses, which I shredded myself. Figuring cheese in this form was the least processed of the bunch, I was confident of a successful result.

Interestingly enough, the results were inconsistent. Some worked perfectly and others flopped. When problems arose, it seemed to be the result of not enough moisture (which yielded very dry crisps) or too much separation of the milk fat (which simply didn’t crisp well).

The bottom line is that I can almost guarantee a favorable outcome when using any variety of shredded cheddar cheese as well as slices, sticks and other shredded products made by Sargento. (Note this is not an advertisement for the company.) If you’d like to prepare the crisps with another variety of cheese, simply do a test batch. The time investment will be minimal – as will the waste if the results are less than ideal.

I recommend cutting a piece of parchment the size of the microwave’s glass turntable ⬇︎ and cooking right on it.  After each batch, remove the crisps to a paper towel, wipe off the parchment with another paper towel (as some of the fat cooks out of the cheese during the cooking process) and reuse the same piece of parchment. 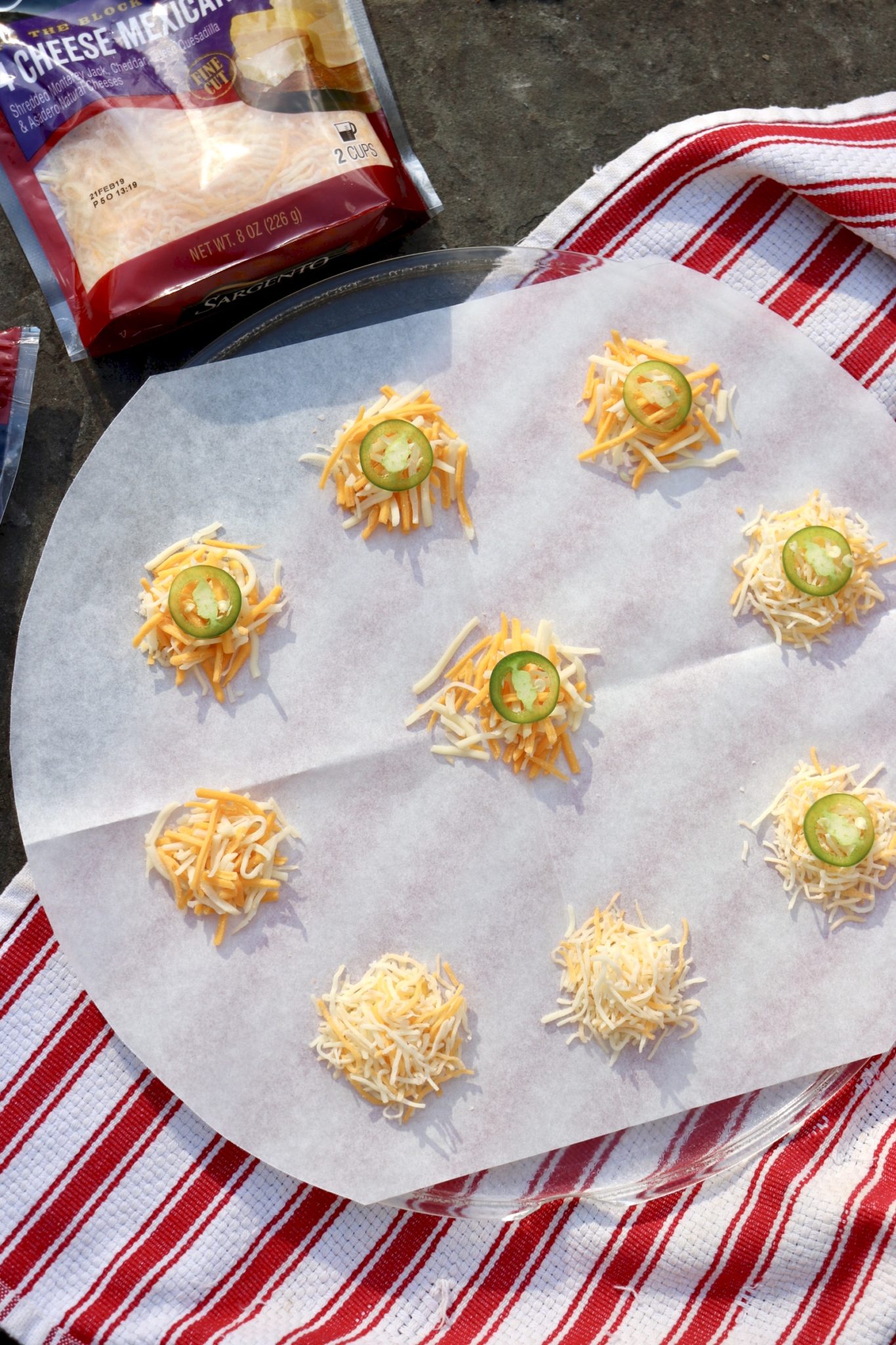 Don’t be alarmed if you open the microwave door and see what at first glance looks like a misshapen spread of melted cheese. Once the grease is blotted away and the cheese cools slightly, the rounds will crisp up and resemble those in the photo.

Recently, I thought to add a very thin slice of jalapeño pepper to the top of the cheese pile before cooking. The flavor pairs beautifully with cheddar and Mexican blend cheeses, isn’t overly spicy and looks rather festive. 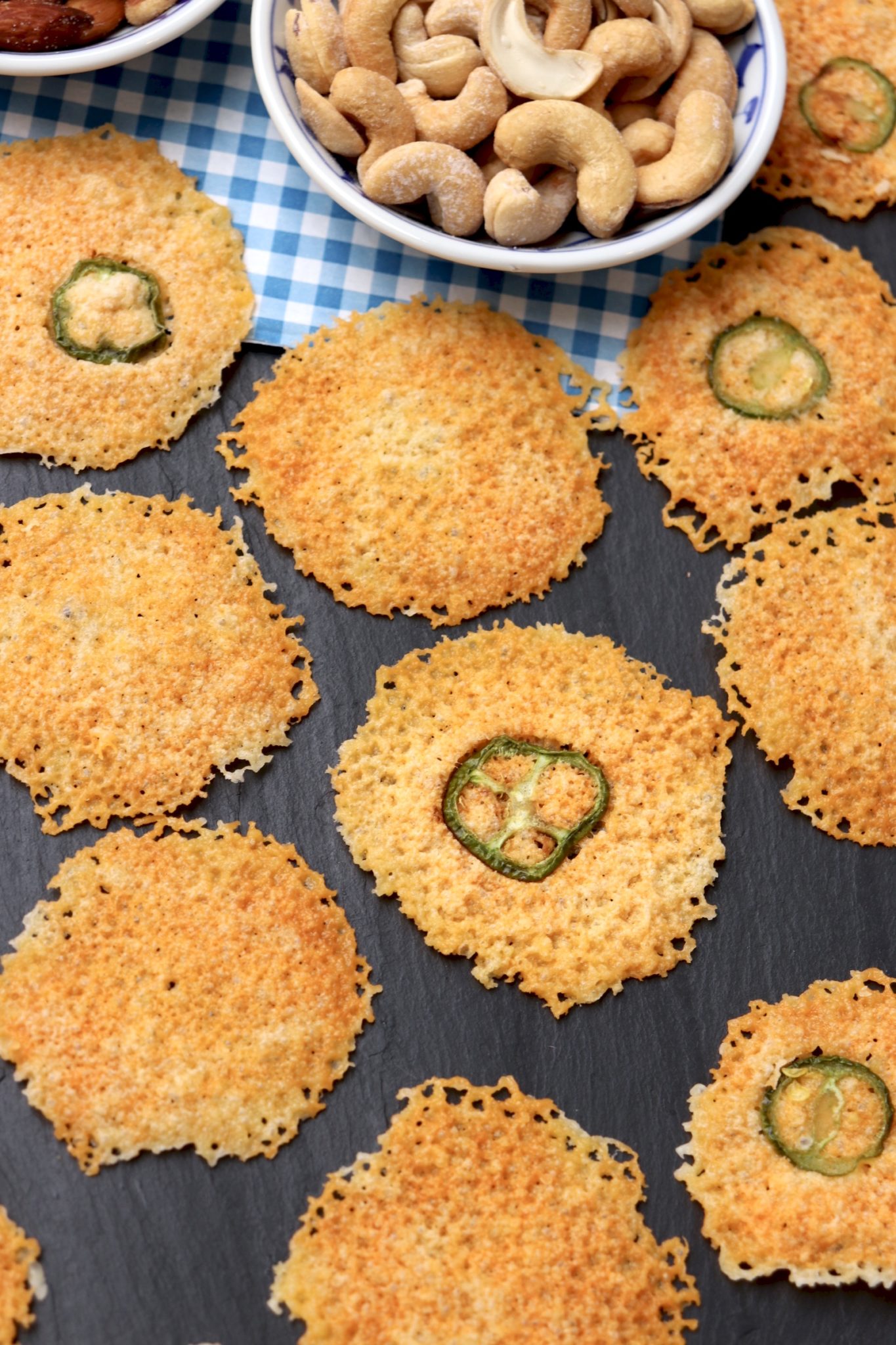 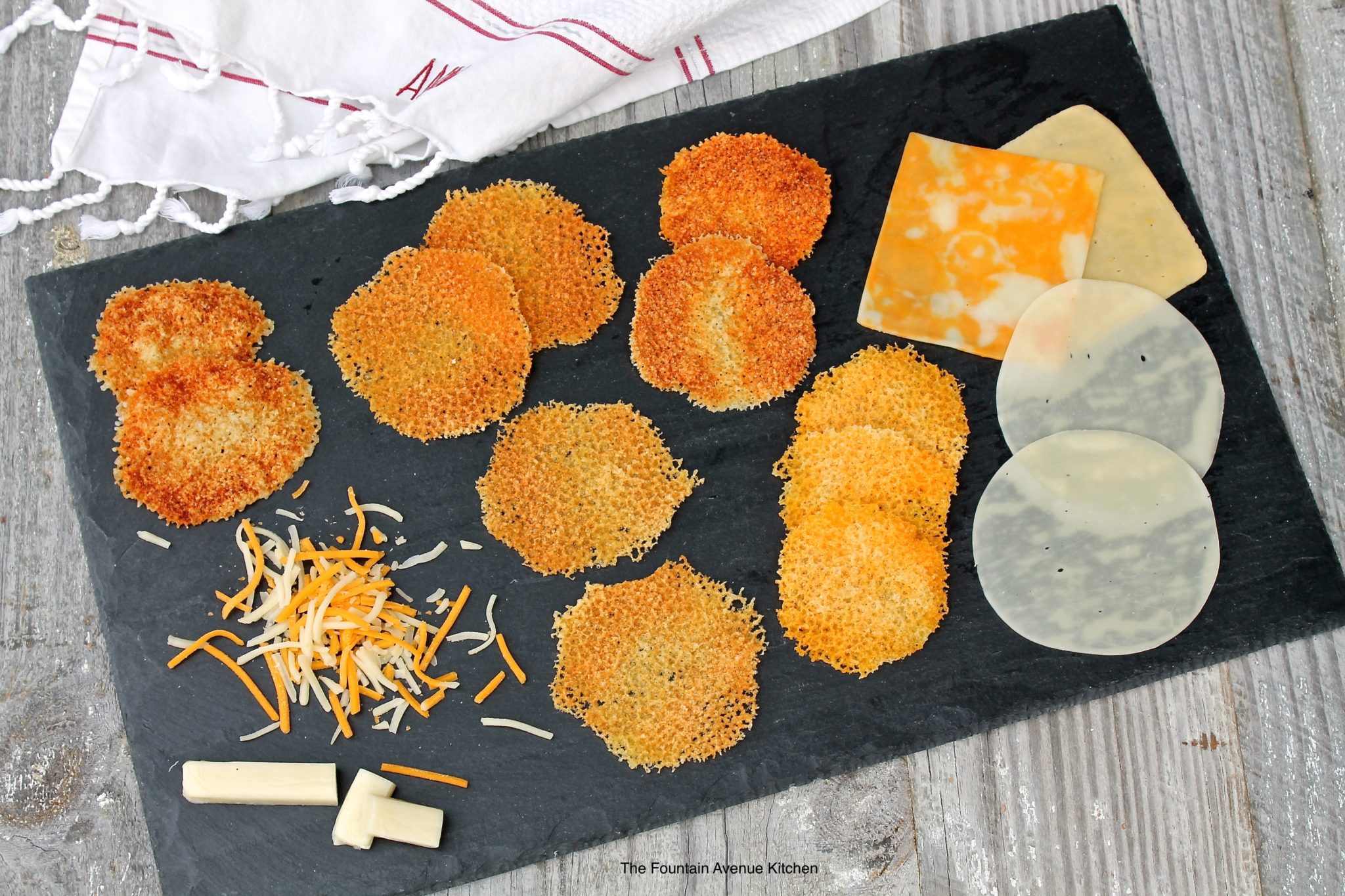 Cheese Crisps
Yield: As many as needed
As mentioned above, results do vary from one brand of cheese to the next. I’ve had consistently successful results with Sargento’s cheeses, so I do recommend them in this case. I’ve used their Gouda, Mozzarella, Provolone, Double Cheddar, Mexican blend and more, in slices, stick and shreds. When branching out, simply run a test batch to ensure success.
Print
One or a combination of the following Sargento all-natural cheeses

Choose one or a combination of the following options:

*If using the optional jalapeño, place 1 thin slice in the center of the uncooked cheese and cook as directed. 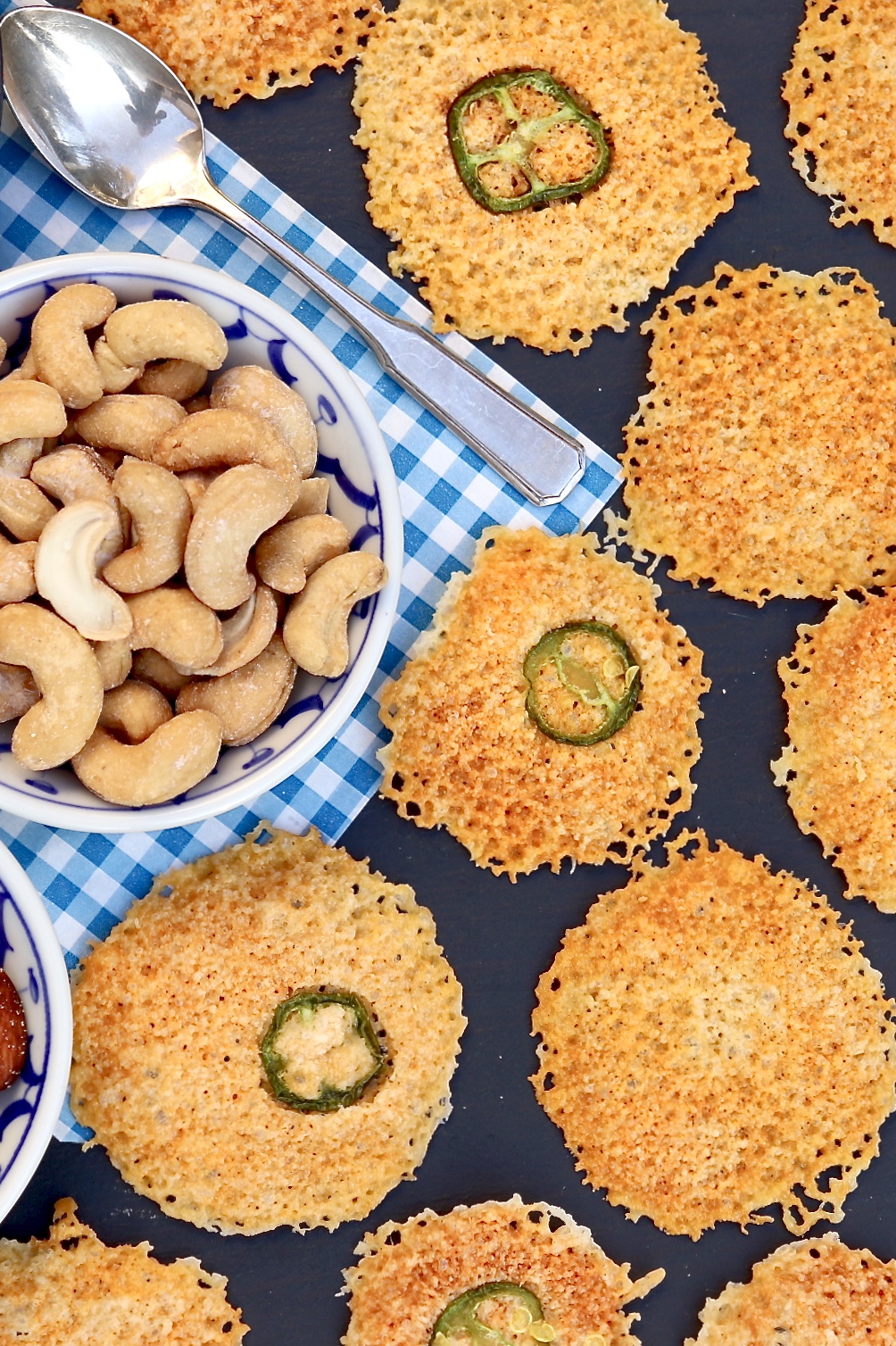 These low-carb crisps of cheese are light and crispy with a hint of saltiness － and they make a fun experiment using a variety of cheese you may already have on hand. 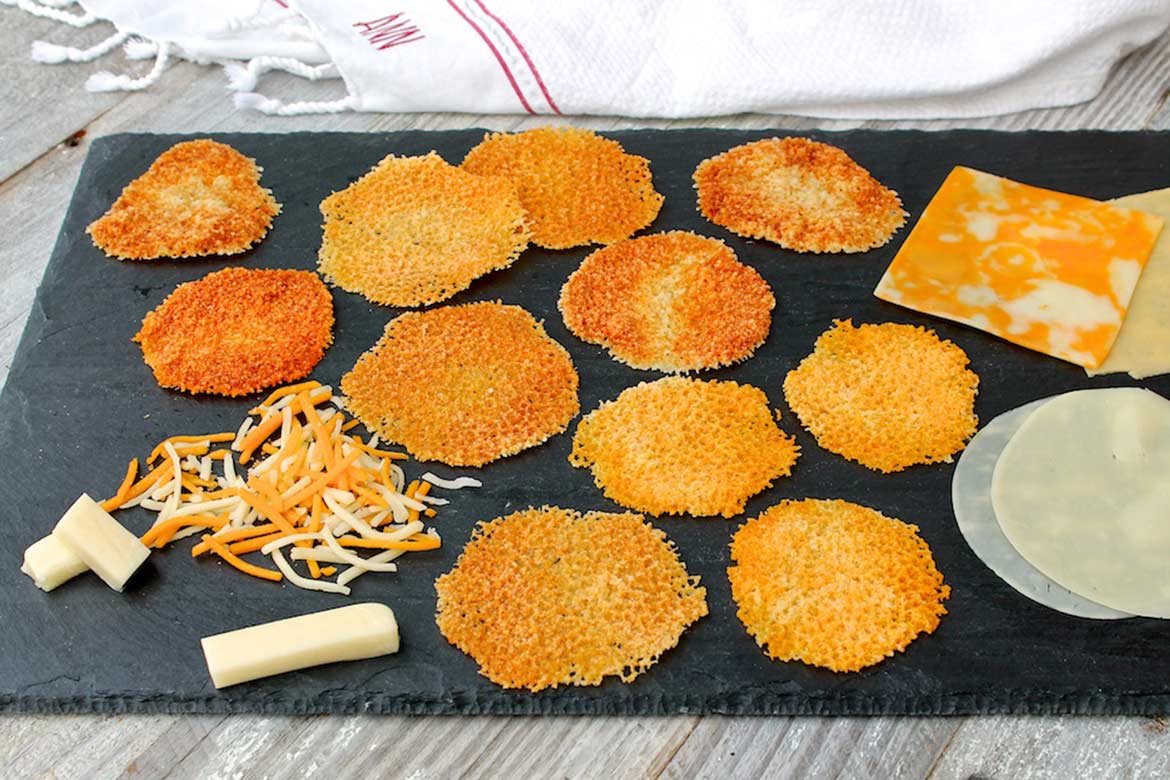 For my readers who enjoy a good kitchen experiment, you may enjoy the post about roasting beans (so delicious, by the way!) or the recipe for 2-ingredient coconut macaroons