My dear friend and incredible baker, Lisa, gave me this idea recently and I thought it was so very clever!

When I served this cake, smiles were on every face and all the kids proclaimed that they wanted their name in chocolate on their next birthday cake.

Chocolate numbers would be fun as well. Additionally, white chocolate would be pretty on many cakes and could be colored with food dye to coordinate with any color scheme.

You could also add colored sprinkles. Just make sure to sprinkle on the letters before the chocolate sets. 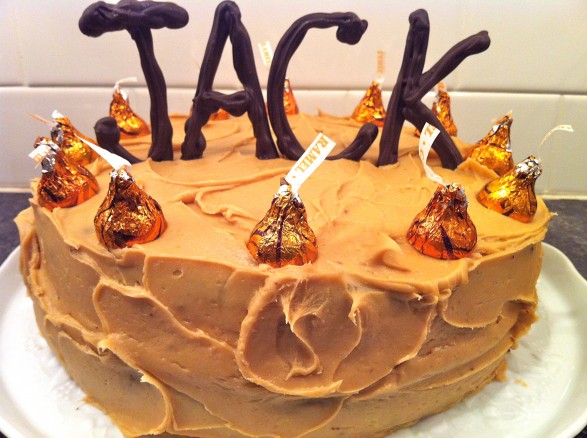 We think this is the perfect chocolate cake and the letters looks great on top. The recipe for Hershey’s Cocoa Cake with Homemade Caramel Frosting has been a longtime family favorite.

And to all the peanut butter fans, I highly recommend pairing the chocolate cake with Foolproof Peanut Butter Frosting. It’s an easy crowdpleaser–especially when topped with chocolate letters!

A word on the chocolate: There are so many kinds of chocolate these days, some with additives, some not, some tempered, some not, and with many different percentages of milk. Tempering is necessary to produce chocolate that sets at room temperature and isn’t streaky.

What is tempering? Tempering is the process of heating and cooling chocolate in order to stabilize it. When chocolate is melted, its molecules separate. Tempering bonds those molecules back together so the chocolate will harden to a glossy, crisp finish. Tempering basically brings the temperature of the melted chocolate back down.

There’s science to tempering that varies based on levels of milk fat, for example, but I’ve included a simple process in the recipe notes that can be used with untempered chocolate.

If using untempered chocolate, it will need to be tempered to ensure it sets at room temperature. Here is a quick how-to for stovetop and microwave:

Stovetop tempering: Melt 6 to 8 ounces of chocolate over low heat in a double boiler. (You can adjust down as needed or to test.) Then turn the heat off and add about a quarter cup (no need to measure, just a small handful) of chopped chocolate and stir it in. This brings the temperature back down which is how it tempers. I turn the heat back on if I need to add more chocolate (like when I’m making my chocolate peanut butter eggs) or if the chocolate cools too much and starts to thicken. Repeat the process as needed.

When melting chocolate in the microwave (which I often do when making Oreo bark or salted almond bark, for example), you can use a similar process. Just heat in 20- to 30-second intervals, stirring as you go. When all chocolate is just barely melted, stir in some chopped chocolate and let it melt in the heat of the already warm chocolate, stirring to incorporate.

The chocolate should then be put in a cool place to set up properly. I put the baking sheet in the refrigerator or near a cool window (time of year allowing) to set and fully cool. At this point, the chocolate should be shiny and set at room temperature.

Helpful hint: I do put the letters in the fridge for a few minutes before placing on the cake so the chocolate is firmer yet. They are easier to stick in the cake this way. Keep in mind that the chocolate letters are still delicate and that candles burning too near the letters will cause them to melt. Just keep a little distance and you should be fine!